a) MODELING FOR EXTERNAL csgA

In the modeling part of our project, the main aim is to determine total number
of external csgA proteins which change according to time since one csgA
protein can capture one penicillin molecule due to binding stoichiometry. To
model this idea, we benefit from TU_Delft 2015 iGEM team equation system.
In our system we are using a promoter which can be induced by L –
arabinose. This is an iGEM part therefore we are using the data from experience
page of part registry (BBa_I0500)(6). 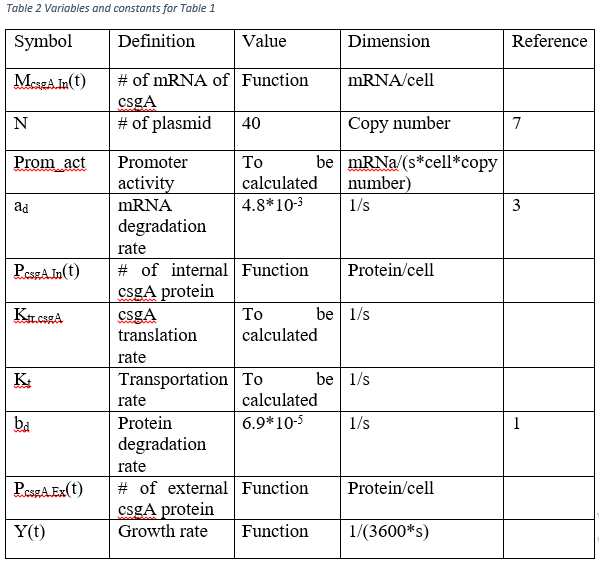 In order to get external csgA amount per cell at a time point, Table 1  should be solved. As seen, there are some variables which should be calculated. b and c sections of modeling are made for these calculations.

b) MODELING FOR GROWTH CURVE

For the bacterial growth curve, same equations are used with TU_Delft 2015 iGEM team. The difference of the equations is that our bacteria are growth in minimal media (M63) at 30 °C for 3 days in order to operate curli operon (9). Therefore, different conditions are tried in growth equation. 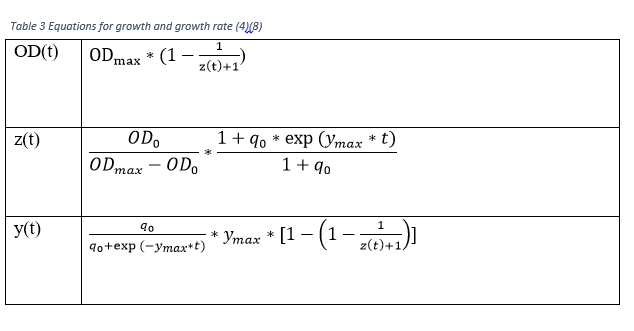 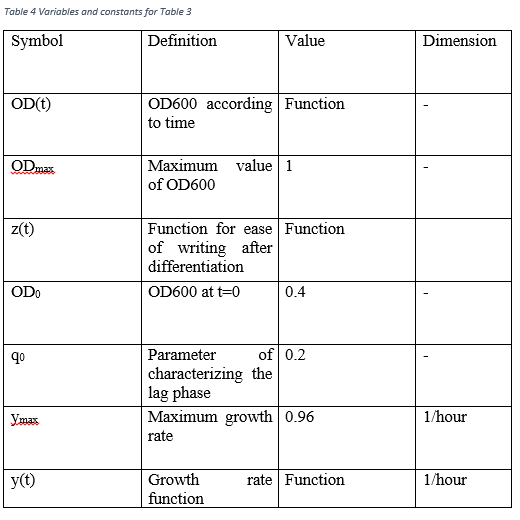 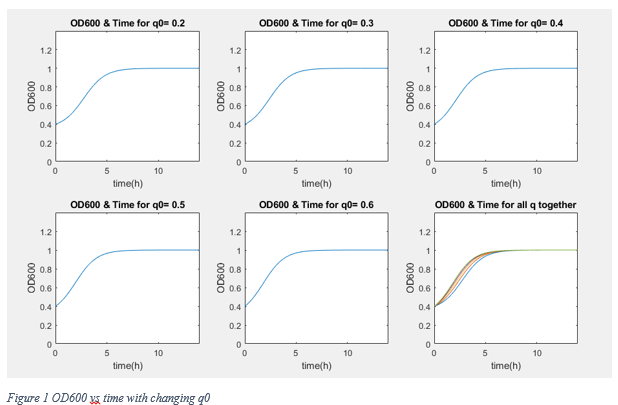 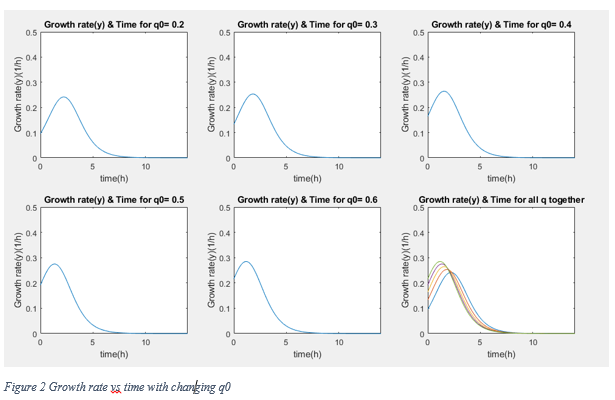 According to graphs, although the conditions are different from normal growth conditions (normal media, 37 °C) the reaching of stationary phase and approximately 0 growth rate occur after 7 hours later. Therefore we assume that our bacteria grow with Table 3 equations.

To model promoter activity, we are using the data from iGEM registry page of  BBa_I0500.

The best way of measuring the arabinose inducted promoter is using the GFP concentration according to time after induction. GFP production can be predicted following equations. 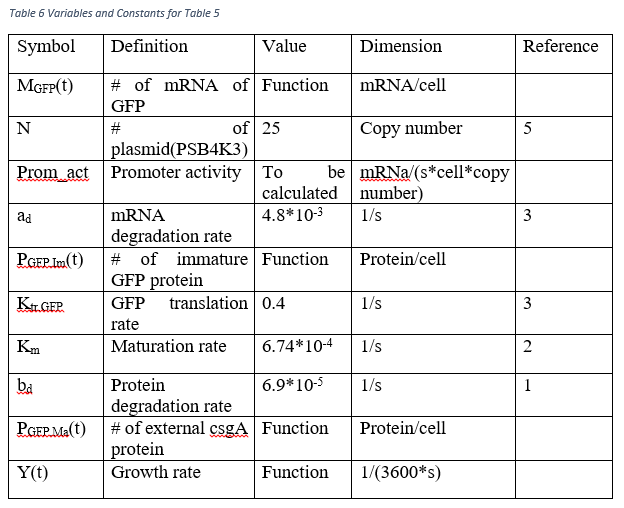 To reach the Prom_act variable, we solve the ordinary differential equations in Table 4 by hand. However, we need the amount of mature GFP protein at a time point. 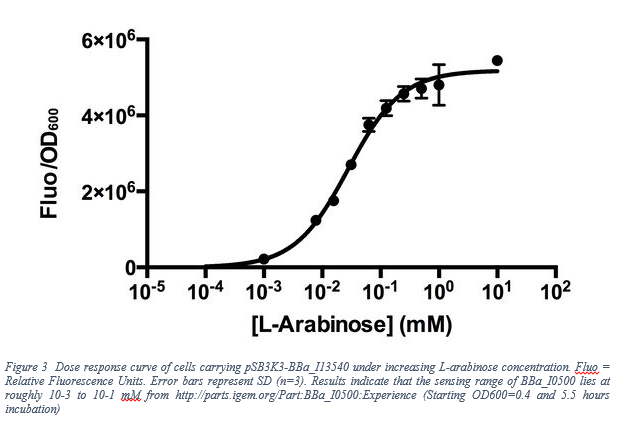 Also we observe that our promoter is working as “All or non” response. The following figure (Figure 4) shows that 0.2% L-arabinose and 0.75% L-arabinose give roughly same amount of activity in terms of Miller Unit.

Eventually, the all variables which are absent in Table 2 are calculated. To obtain Ktr.csgA, proportion calculation is used. 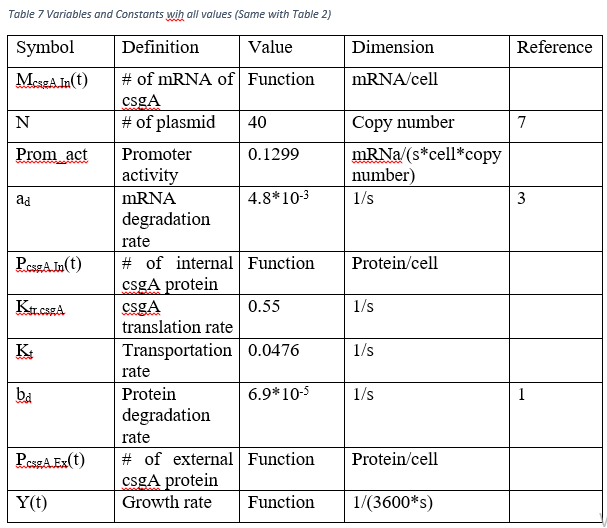 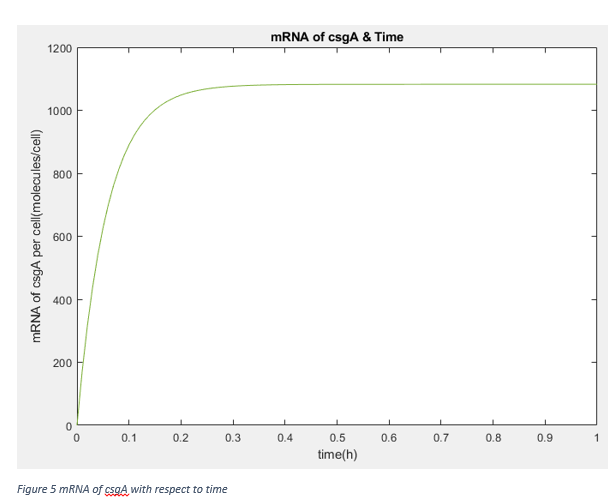 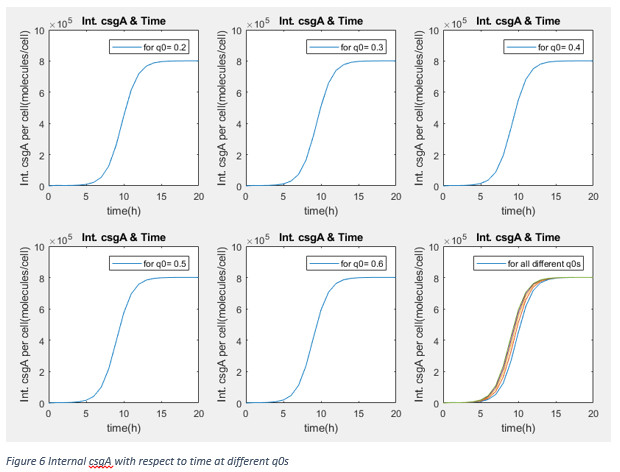 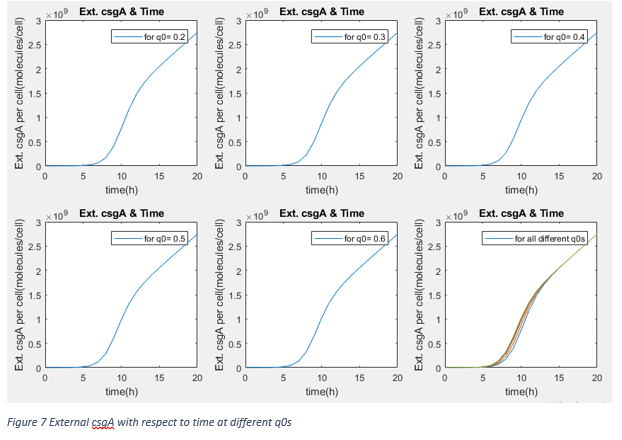 These results show that after steady state, the amount of protein is not changed by lag phase parameter q0 (It is kind of measure of capability of fitting the environment). Therefore, our assumption about promoter effectivity and growth rate as taking them same with normal growth conditions. We are using the csgA proteins to capture penicillin after at least 3 days. Moreover, our protein amount is independent from inducer concentration in range of 0.2% and 0.75% .

If graphs would be investigated, we can directly see that after 20 hours, the relation between amount of external csgA with time is linear. To calculate expected external csgA, accordingly captured penicillin amount in terms of molecules, following equation can be used to determine how much time bacteria are incubated. 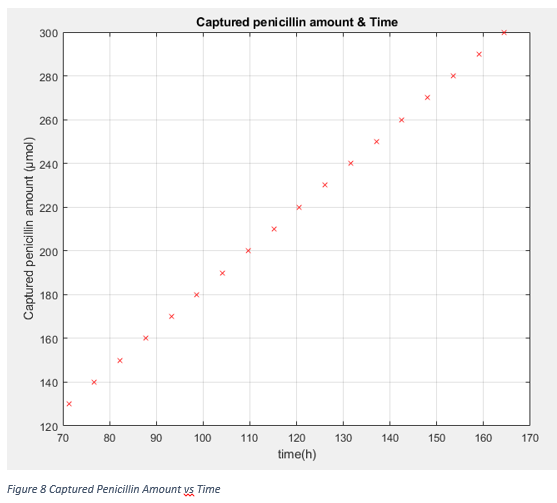 For example to capture approximately 130 μmol of penicillin, the total incubation time of bacteria should be 72 hours (3 days).

All graphs except Figure 3 and 4 are drawn by MATLAB. Here is our MATLAB files.

In our project, we have 2 different conjugated proteins: csgA-pbp1b and BFR-sfGFP. In order to make predictions how they work, we use I-Tasser website. Followings are our proteins 3D structures predicted. 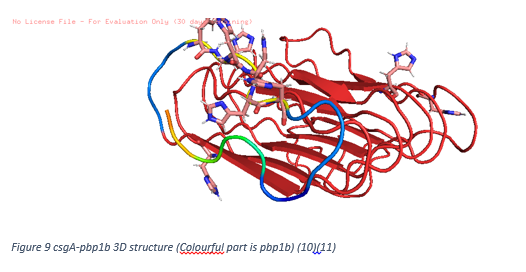 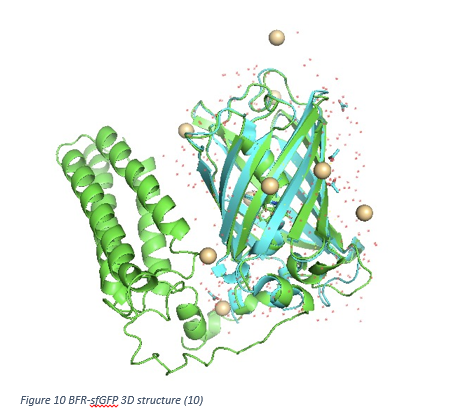 To create Figure 9, after creating 3D structure by I-Tasser, SwissDock is used to determine binding habits with our ligand, penicillin. As seen, top 10 binding energies show that penicillin molecules tends to bind pbp1b part of csgA-pbp1b. Others are non-specific and can be neglected. Therefore we may conclude that our protein is successful at capturing penicillin.

In Figure 10, 3D structure of BFR-sfGFP is shown as green. Blue part of the figure indicates the natural sfGFP. SfGFP part of our protein is overlapped with natural sfGFP. This situation can be concluded as conjugation is made appropriately and sfGFP signal is observed to track our bacteria which produce BFR. 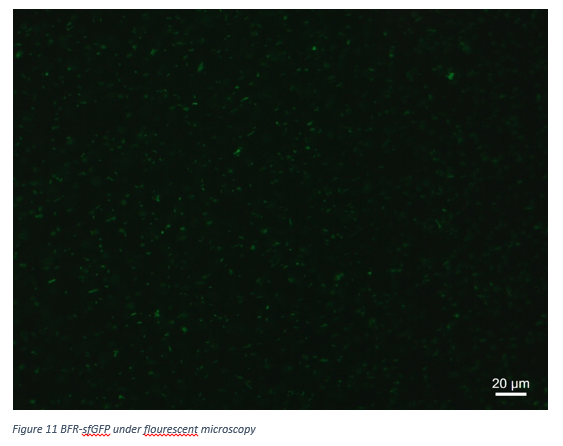 Figure 11 shows that our BFR-sfGFP protein is working correctly in terms of fluorescent emitting.