The 2018 iGEM Evry Paris-Saclay team was composed by master and bachelor students, but the project would not have been possible without the help of many people whom we wanted to thank.

DISTRIBUTION OF THE TASKS

Esteban Lebrun naturally took the lead of the team. With kindness, firmness, and impartiality, he managed to coordinate every pole of the team to build a homogenous project. With the help of Angelo Cardoso Batista, he designed the scientific project (bibliography, constructions). He also helped defining the experimental strategy (workflow, primers, strains…), lead the public relations, took care of most of the administrative tasks, took our photographies and designed the interactive rug. Finally, he continued the BioLab project which was initiated by the last year team.

Suzanne Phengsay was our illustrator and head of the Communication. She designed and drawn all our posters, chibis, banners and goodies. She managed to give a nice visual identity to our team and she directed the social networks. She also contributed to the creation of equipments for the events, such as the interactive rug. Finally, she stayed relaxed facing the team leader’s expectations. 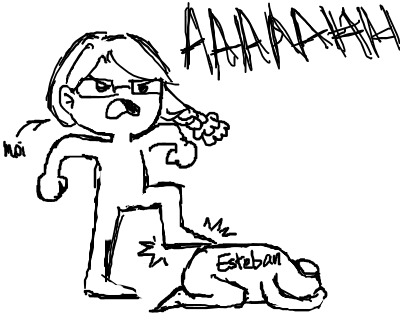 Yann Bourgues was our web designer. He created our team website and our wiki structure and he introduced the other members to HTML. He was also involved in the communication team.

Yassine Ajlil was the head of Human Practices. He met professionals from different fields to investigate the viability of our project and find applications for it. He worked on improving previous iGEM projects thanks to our project. He found how to integrate the Human Practices into the scientific project.

Adèle Mazelin was the head of the Events. She took care of the administrative tasks related to the events and created media and activities to popularise synthetic biology and inform the general public about iGEM. She lead the creation of equipments for the events and she organised and directed the collaboration with the GO Paris-Saclay 2018 team.

Solène Castanier was our Swiss army knife. She contributed to the communication on social networks, she participated in the events and the creation of equipments for the events and she worked in the wet lab. She also managed to control the team leader’s ego.

Léa Rauscher was our legal expert. She worked on the Human Practices and did the Legal and Ethical aspect of the project.

Charlotte Deneaux searched professionals to meet for the Human Practices and looked for financial resources.

Paul Ahavi was in charge of the accounts management and the many orders we did. He also actively managed the sponsoring and interacted with potential partners. Besides, he was extremely involved in the experimental work and lead the Interlab Measurement Study.

Paul Del Rincon has been involved in the experimental work and took care of the stocks. He provided advices to young team members about good practices in the lab. With the help of Julien Fabregue, he also translated in French a booklet to teach synthetic biology as part of a collaboration with the Washington 2018 team.

Angelo Cardoso Batista has been involved in the experimental work and counted with the help of Amir Pandi for cell-free screening. He also imagined and developed our video game with the help of a game developer Clara Matos. He contributed to the designing of the parts and managed to do the Storytelling for the project.

Marine Podevin helped in the experimental work. She also participated in the events and the Human Practices, searching for meetings with professionals.

Camille Monteil helped in the experimental work, especially in the Interlab Measurement Study.

All the members have been involved in the brainstorming to find an interesting project. Additionally, Clémence Deiber, Océane Guedj and Saran Pankaew participated at the begining, but had to leave the project before the end.