The switch from lytic-to-lysogenic cycle of phage phi3T is based on the expression of a single transcript, AimX [1]. The expression of AimX is controlled by the transcriptional regulator AimR (BBa_K2279000) which is inactivated upon binding of the ‘arbitrium’ hexapeptide SAIRGA. The transcription of AimX is driven from the intergenic region between AimP and AimX which we will refer to as pAimX(full) promoter (BBa_K2675020). This corresponds to nucleotides 70182 to 70313 of Phi3T phage genome (GenBank KY030782.1). 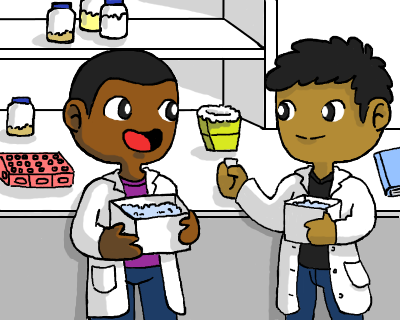 We have analysed the sequence of the pAimX(full) promoter using various available tools like the Neural Network Promoter Prediction web server, BPROM websever [2] or ARNold [3, 4]. These sequence analyses revealed the presence of three putative promoters that we denote pAimX(1), pAimX(2) and pAimX(3) (Figure 1), but also of an inverted repeat sequence potentially forming the stem-loop structure of a terminator.

Fluorescence measurements of sfGFP in E. coli cells harbouring the 4 expression cassettes (BBa_K2675050, BBa_K2675051, BBa_K2675060 and BBa_K2675061) in both pSB1C3 and pSB4K5 backbones were unable to detect any significant sfGFP expression (Figure 3). This observation was visually confirmed when bacteria were spotted on plates (Figure 4). Even the presence of AimR did not have any effect on sfGFP expression from the pAimX(full) promoter, nor the pAimX(short) promoter (Figure 3).

From these data, we conclude that pAimX(full) and pAimX(short) are not active promoters in E. coli. The reasons may be multiple: sub-optimal -35 and/ or -10 boxes sequences, sub-optimal distance between the consensus sequence motifs (typically 17+/-1 bp), or very low basal promoter activity that cannot be enhanced by AimR since it does not function as an activator outside the native host (Bacillus).

To improve the pAimx(full) and pAimX(short) promoter activity in E. coli, we decided to substitute the -35 and -10 boxes of these promoters with those from the J23110 promoter (Figure 2).

J23110 is a constitutive promoter from the Anderson Library with a medium transcription strength compared to the other members of this promoter family. In our system, when using sfGFP or sfGFP-LVAtag (BBa_K2675056 and BBa_K2675066) as reporter downstream of J23110 promoter, an intense fluorescence was detected (Figures 3 and 4). 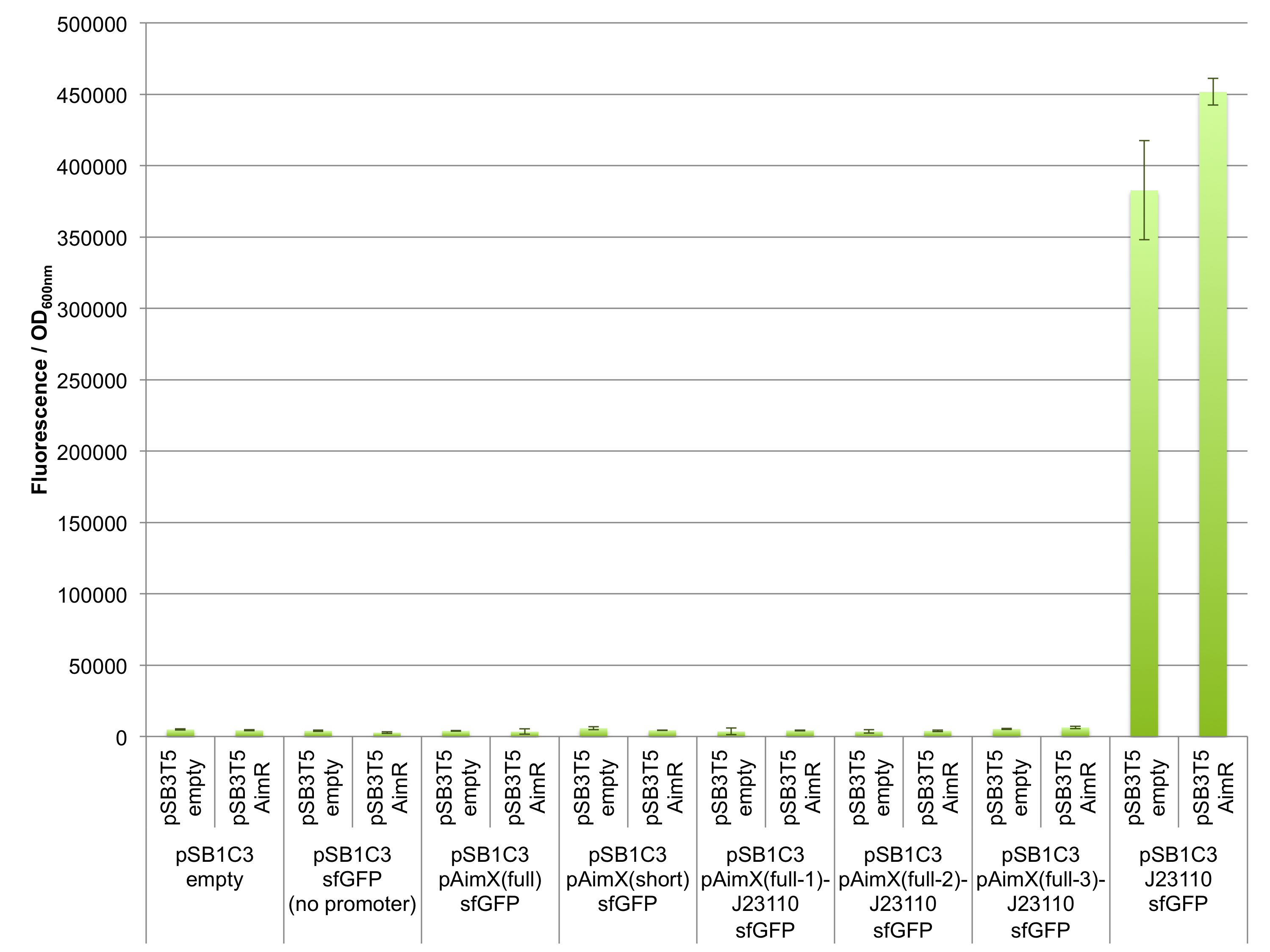 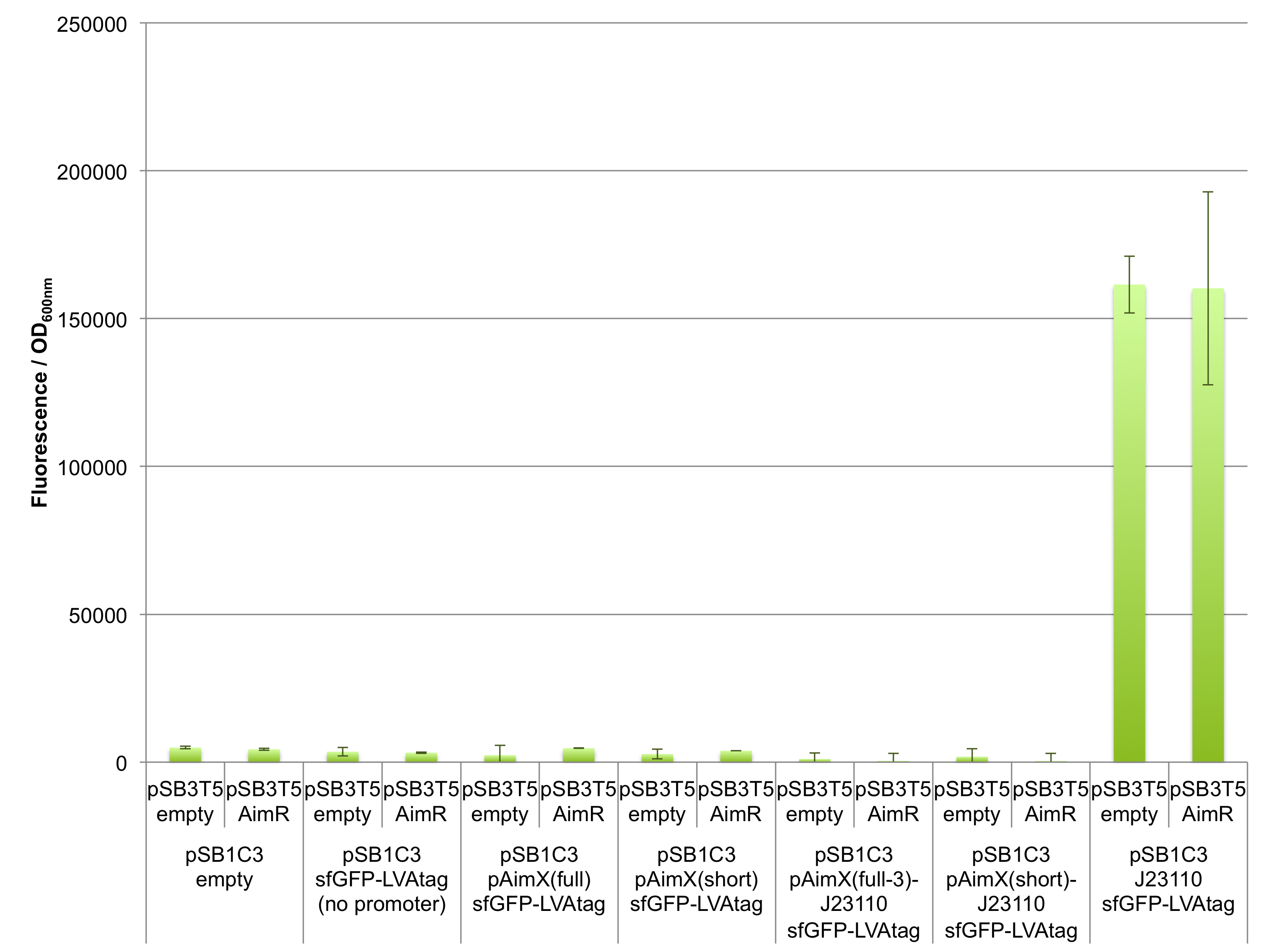 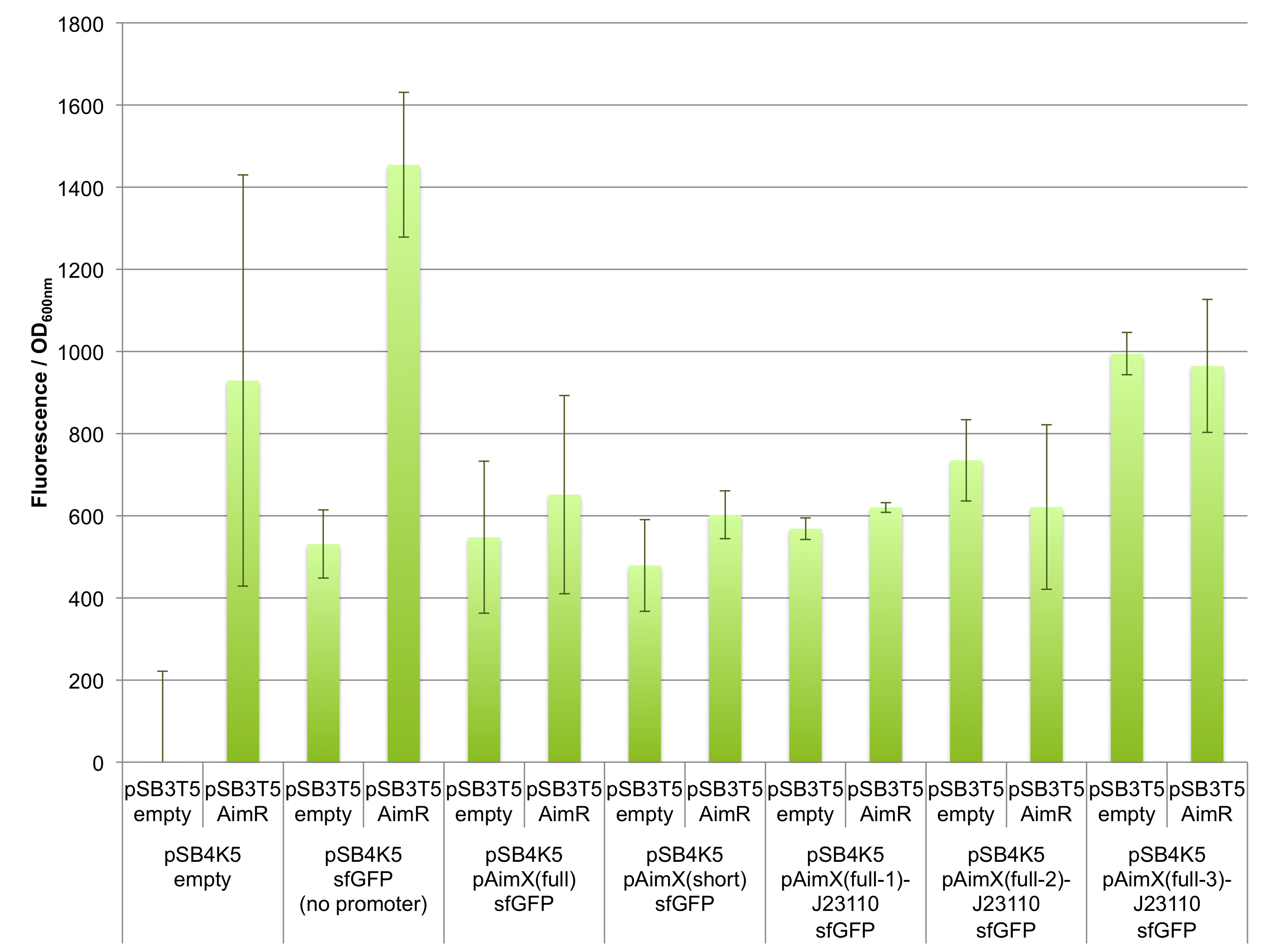 This absence of sfGFP expression while using the hybrid pAimx(full)- and pAimX(short)-J23110 as promoters can be explained by the fact that -35 and -10 boxes are not the only elements of a promoter that can affect transcription initiation. For example, UP elements (sequence upstream of the -35 box), spacing between -35 and -10 boxes, non-template nucleotide at -5, spacing between the -10 box and the +1, or 5’UTR sequence, can also have significant effects on gene expression [5, 6].

Studies showed that an A/T rich sequences upstream of the -35 box tend to enhance transcription for some promoters [7]. Since the transcription of AimX is probably initiated from the pAimX(3) putative promoter closest to the gene, we analysed the -60 to -40 sequence upstream of this promoter and found it to be only 50% A/T.

THE NATURAL PROMOTER(S) TURNED INTO AN OPERATOR

AimR was described to be a transcriptional regulator of the pAimX promoter in B. subtilis [1]. The exact binding site of AimR to DNA was not precisely described, but it was mapped by ChIPseq in the intergenic region between AimP and AimX genes, a.k.a. the pAimX(full) promoter (BBa_K2675020).

pAimX(full) and pAimX(short) sequences, as well as their hybrid versions, proved not to be active promoters in E. coli. However, assuming that AimR retains its binding ability to its specific target sequence in E. coli, we considered converting the pAimX into an operator for regulation of an E. coli promoter.

To do this, we needed to place a constitutive E. coli promoter upstream of pAimX and a reporter gene downstream of pAimX. In this design, transcription will be initiated at the upstream constitutive E. coli promoter and, in the absence of AimR, the RNA polymerase should be able to transcribe the pAimX region, the RBS and the reporter sequence up to the terminator. In the presence of AimR, AimR will bind to its specific recognition sequence mapped in pAimX(full) region and thus it should prevent the RNA polymerase from continuing the transcription. The expected results are: - in the absence of AimR: expression of the reporter gene - in the presence of AimR: no expression of the reporter gene

Thus, AimR will be converted from an activator in Bacillus to a repressor in E. coli. We considered this activator-to-repressor functional conversion following discussions with several scientists who are used to working with the classical repressor/ inducer systems like LacI/ IPTG (see Integrated human practices).

We chose the J23110 constitutive promoter from the Anderson Library that is reported to have a medium activity compared to the other members of this promoter family. A medium strength promoter allows more easily to detect variation in its activity (inhibition or activation) than a low or high strength promoter.

Then we placed the pAimX(full) and pAimX(short) sequences (BBa_K2675020 & BBa_K2675021) between J23110 and sfGFP-LVAtag (BBa_K2675006), and we thus constructed 2 composite parts: BBa_K2675057 and BBa_K2675058 respectively. During the cloning process, we selected a colony that, upon sequencing, revealed to have a truncated version of the J23110 with only the -10 box (BBa_K2675026) upstream of pAimX(short). As this colony was green under blue light (with amber filter) due to sfGFP expression, we continued characterising this cloning artefact for its interesting promoter activity (BBa_K2675059).

The results presented in Figures 5 and 6 show that the pAimX(short), but not pAimX(full) acts as expected as an operator for J23110 promoter in E. coli. Indeed, we can observe the fluorescent sfGFP expressed when this reporter gene is placed downstream of the composite promoter J23110 + pAimX(short) (BBa_K2675058). Moreover, the fluorescence decreases in the presence of AimR suggesting that AimR acts as predicted for this design: as a repressor. The same trend is observed also when the truncated version of J23110 in present upstream of pAimX(short) (BBa_K2675059).

However, no significant sfGFP expression was observed when the pAimX(full) sequence was inserted between between the J23110 promoter and sfGFP (BBa_K2675059). One plausible explanation is that transcription is initiated from the upstream J23110 promoter, but it ends prematurely at an internal terminator predicted to exist in the pAimX(full) sequence (see arrows marking a hairpin loop in Figure 1). In addition to proving that AimR can act as an effective repressor in E. coli, these experiments help identify the precise site of AimR binding to DNA: the pAimX(short) promoter (BBa_K2675021).

In Bacillus cells, AimR is inactivated upon binding of the ‘arbitrium’ hexapeptide SAIRGA [1]. To test if the repressor activity of AimR in E. coli is inhibited in the presence of the SAIRGA hexapeptide, we added in the culturing media increasing concentrations of the peptide. We can see on the graph presented in Figure 7 that fluorescence intensity and SAIRGA concentration are not really correlated since increasing concentration of SAIRGA doesn’t influence fluorescence output, neither in the absence nor in the presence of AimR. Although the fold-repression (the ratio between the Fluorescence/OD600nm values of the samples without AimR over those with AimR) increases slightly with increasing SAIRGA concentration, the variance of the fluorescence data are too high to draw a clear conclusion (Figures 8).

Instability of the SAIRGA in the medium or its inefficient import into E. coli may be other reasons why its effect on AimR is not obvious. The import of peptides in E. coli is dependent on the expression of transmembrane transporters in the cell plasma membrane. Considering that SAIRGA is a peptide signal, its import may be realised through the oligopeptide permease system (Opp) that is an ABC transporter capable of importing large oligopeptides into bacteria without selection for size, composition, sequence or charge [9]. The Opp system can be induced by supplementing the media with L-Leucine [9]. So, we decided to test the effect of SAIRGA peptide in culturing media supplemented with this amino acid.

We also tested the effect of CaCl2, know to have a permeabilizing effect on E. coli plasma membrane.

The results presented in Figure 9 are encouraging : the represion fold (the ratio between the Fluorescence/OD600nm values of the samples without AimR over those with AimR) is slightly increasing with increasing SAIRGA concentration.

Sequence analysis of the pAimX(full) promoter (BBa_K2675020) revealed the presence of an inverted repeat sequence potentially forming the stem-loop structure of a terminator (Figure 1). The results presented above in Figures 5 and 6 show that no fluorescent sfGFP is expressed when pAimX(full) sequence is inserted between between a constitutive promoter (J23110) and the reporter gene sfGFP-LVAtag (BBa_K2675059).

To test if this predicted terminator is indeed responsible for this effect, we randomised the left arm of the terminator stem or the poly-U tail as two different strategies of disrupting the predicted terminator. Since intrinsic termination depends on both a strong hairpin and a downstream polyU signal [10], we expect that disrupting either of them should restore fluorescence from these constructs. From the library we generated, we selected 8 colonies that appeared to be fluorescent on plates.

Sequencing revealed various mutations and insertions in the terminator region (Figure 11) that lead to various degrees of sfGFP expression initiated at the upstream J23110 promoter (Figures 12 and 13). Terminator versions 1, 2, 7 and 8 where termination efficiency is most severely reduced were designed to disrupt the polyU tail, while versions 3 to 6 were designed to disrupt the hairpin loop. These results suggest that the predicted hairpin loop in the pAimX(full) promoter is indeed an active terminator in E. coli, and possibly also in Bacillus. If the predicted hairpin in the pAimX(full) sequence acts like an intrinsic terminator in Bacillus it is possible that the activating function of AimR is in fact an antitermination function, consistent with other phages where the antitermination mechanism is used for infection cycle regulation [11]. That said, the fact that in our experiments expression from the composite promoter J23110 + pAimX(short) is regulated by AimR (Figures 5 and 6), while that from J23110 + pAimX(full) is not, rules out an antitermination mechanism for regulation by AimR at least in E. coli.

We have successfully transferred the ‘Arbitrium’ communication system from a Bacillus phage to E. coli. While doing so, we have engineered new “composite” promoters that convert the transcriptional activator AimR from Bacillus into a repressor in E. coli. We have precisely identified the AimR binding region in the pAimX(full) promoter. We have also identified a putative intrinsic terminator in the pAimX(full) promoter sequence, and verified its terminator activity in E. coli. Further, we have ruled out a transcription antitermination mechanism at this terminator site. We also have promising data that indicates conditional regulation of AimR repressor activity by the small signalling peptide SAIRGA.