In our system, the hexapeptide SAIRGA is the signalling molecule used for cell-to-cell communication [1]. To perform its quorum sensing function in the natural phi3T phage infection, SAIRGA needs to be secreted out of the cell. It is produced as an immature pre-pro-peptide, AimP (BBa_K2279001), that upon secretion is cleaved extracellularly to remove the secretion signal and release the mature hexapeptide. The mature peptide then re-enters cells and binds to its receptor protein AimR (BBa_K2279000). Binding of SAIRGA to AimR blocks the activator function of AimR that, in turn, facilitates a switch from lytic-to-lysogenic viral cycle. By acting as a negative regulator of AimR, the SAIRGA signal makes the lysis-to-lysogeny switch of phi3T phage dependent on the “quorum” of phi3T phages in the bacterial population. 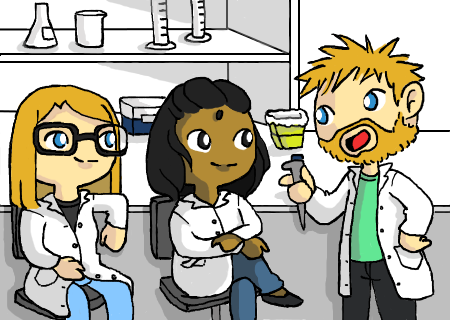 In phi3T phage, SAIRGA is produced as AimP (BBa_K2279001) with specific secretion and protease-cleavage tags [1] that allow secretion and extracellular processing by Bacillus. Since we had no further information about this protease, we could not investigate the ability of Escherichia coli to produce a similar enzyme. Consequently, to produce SAIRGA in E. coli, we decided to replace this tag by an E. coli secretion signal. We have investigated three different secretion signals: OmpA (BBa_K208003), PelB (BBa_J32015) and Tat of csp2 gene of Corynebacterium glutamicum (Uniprot Q04985).

E. coli DH5α harboring the SAIRGA expression plasmids were grown at 37°C in mineral salts medium [4] containing 2 mg/mL glucose and 35 μg/mL chloramphenicol (Figure 8). During the culturing, samples were prelevated, centrifuged and the supernatant was first sterilised by filtering through a 0.22 µm membrane, then loaded on a Pall Nanosep centrifugal device with Omega membrane (MWCO 3 kDa). The low molecular weight fraction of the culturing media thus recovered was analysed by LC-MS: ultra high pressure liquid column chromatography (UPLC) on a ACQUITY HSS T3 1.8 µM, 2.1 x 100 mm column (Waters) coupled with a Xevo G2-S Qtof mass spectrometer (Waters). The chromatography was performed using a gradient of using a (A) 1% formic acid in whater / (B) 1% formic acid in acetonitrile with the following program: from 0 to 5 min solvent B was increased from 2% to 70%, then it was maintained for 1 min at 70%; aftrewards it was decreased in 30 sec to 2% and it was maintained at 2% for 3.5 min for column re-equilibration. The flow rate was 0.2 mL/min and the column temperature was set to 45°C. The ions were detected in resolution negative mode.

The pure synthetic SAIRGA peptide was readily detected by LC-MS. As shown in Figures 1 and 2, a peak of 572 Da, which correspond to SAIRGA’s monoisotopic mass [M-H]- was observed at a retention time of 3.9 min (Figure 3). The area under the curve is proportional to the concentration of SAIRGA (Figure 4).

LC-MS analysis of samples isolated from the fermentation broth of the E. coli strains harbouring a SAIRGA expression plasmid was performed.

As shown in Figures 5 and 6, the expression vector of OmpA-SAIRGA (BBa_K2675042) is able to produce a compound with a monoisotopic mass a peak of 572 Da, which correspond to SAIRGA’s monoisotopic mass [M-H]- at a retention time of 3.9 min. The size or the area under the peak is increasing with time (figure 7). This suggests that OmpA is an efficient E. coli secretion tag which allows the release of the mature peptide SAIRGA in the culturing media.

The other parts (BBa_K2675041, BBa_K2675043 and BBa_K2675044) did not show any peak at 572 Da, which suggests that the native Bacillus secretion tag, as well as PelB and Tat signals are not able to secrete the mature peptide. We suspect that, in each case, the pro-peptide is produced and released but its secretion tag is not cleaved by the cell.

Moreover, after 24h of incubation, we were unable to detect the SAIRGA peptide in the culturing media (Figures 9 and 10). This is probably due to the exhaustion of the medium: and the instability of the secreted peptide in the medium.

We have successfully built a part, OmpA-SAIRGA (BBa_K2675002), which is able to produce and release the mature hexapeptide SAIRGA in the culturing media of E. coli cells harboring this part equipped with an RBS and under the control of a constitutive promoter (BBa_K2675042).

Thus, we have made an improvement of the BBa_K2279001, the SAIRGA peptide with the original secretion signal, that is not functional in E. coli under un equivalent transcriptional and translational control (BBa_K2675041).