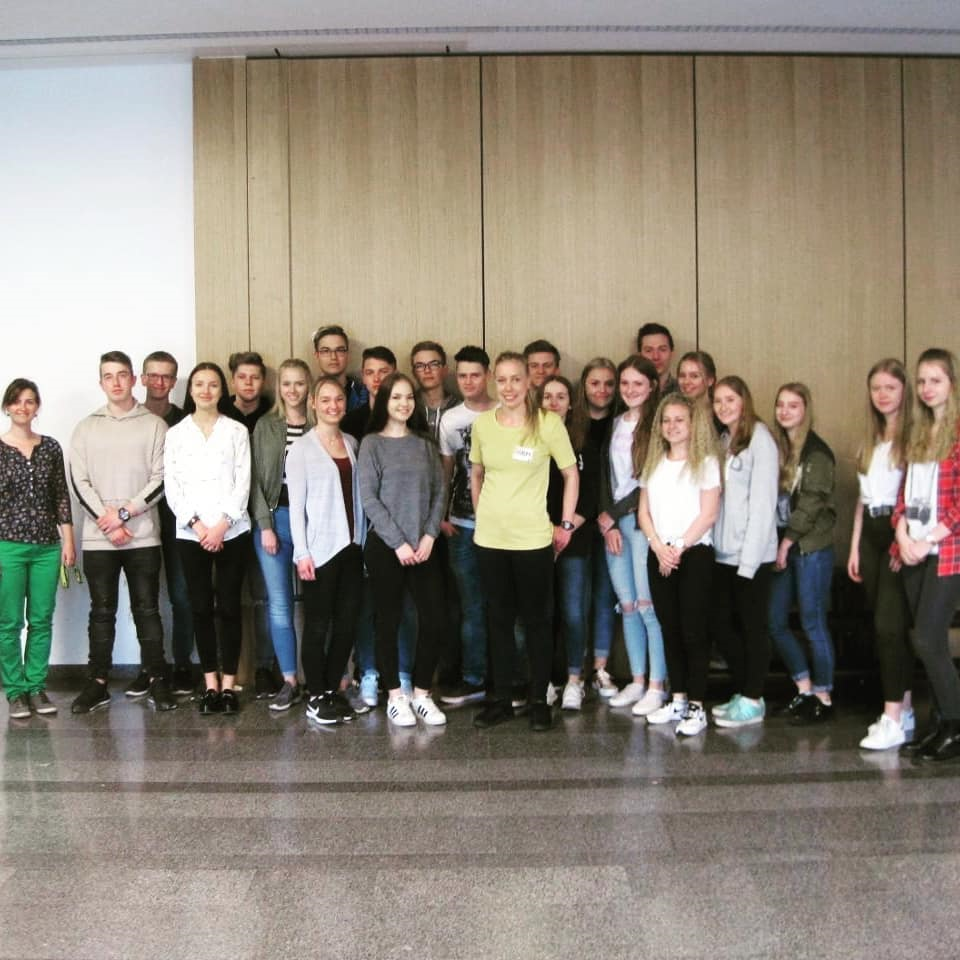 Our Team-member Vroni with her class.

One of the most important things in science is its educational aspect. Therefore we aim to stay in constant contact with the public, to inform about our project. In this way we receive constant feedback which we try to directly implement into our project design. We especially want to raise awareness in young children to involve them in research and wake their passion for science early on in life. Therefore, our team member Veronika went to the Staatliche Chiemsee Realschule to present our project to young students and show them the everyday life of scientists. At this point, we already realized that even though Glyphosate is such a prominent topic in the media, the public and especially young people lack a certain, objective and scientific background. Informing the public in an objective and scientific way is one issue that we want to tackle during our project.

Two of our team members presented our project at the Bier & Brezeln event organized by the Fachschaft (student representatives) of Biology of the University of Göttingen. This is a platform that allows to spread research in an interdisciplinary way. It was a huge success as students from diverse departments of the university led an interesting discussion and gave us a lot of input for the further course of our project. 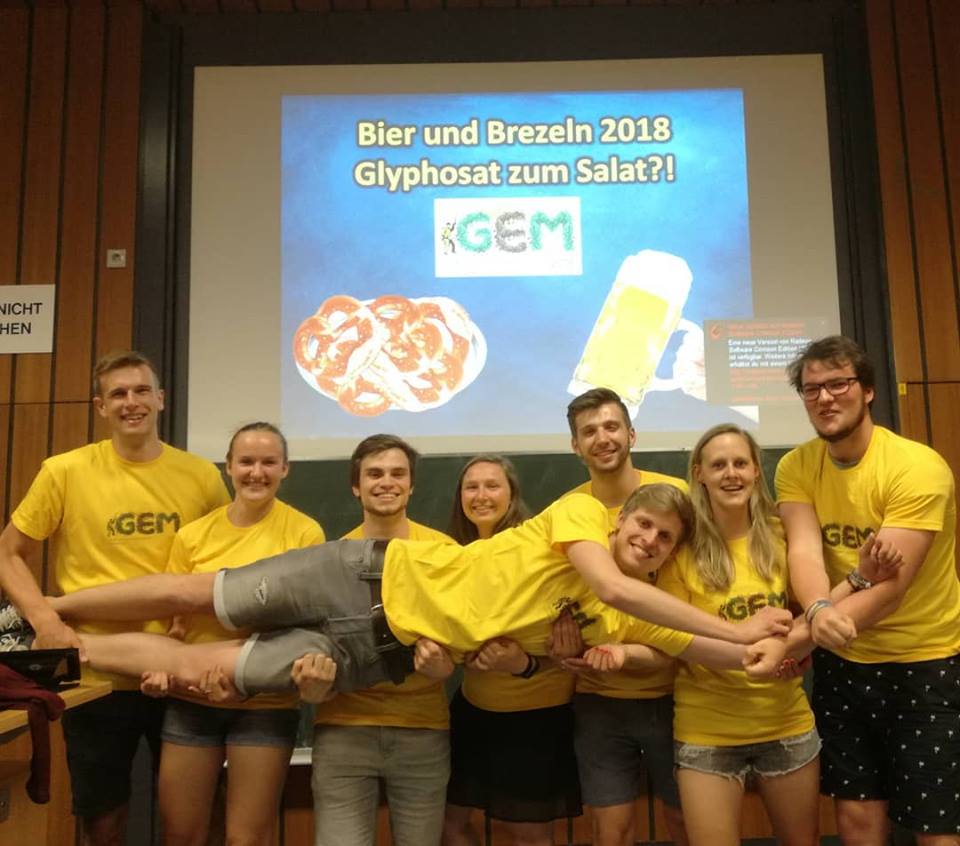 Our team at Bier & Brezeln event. 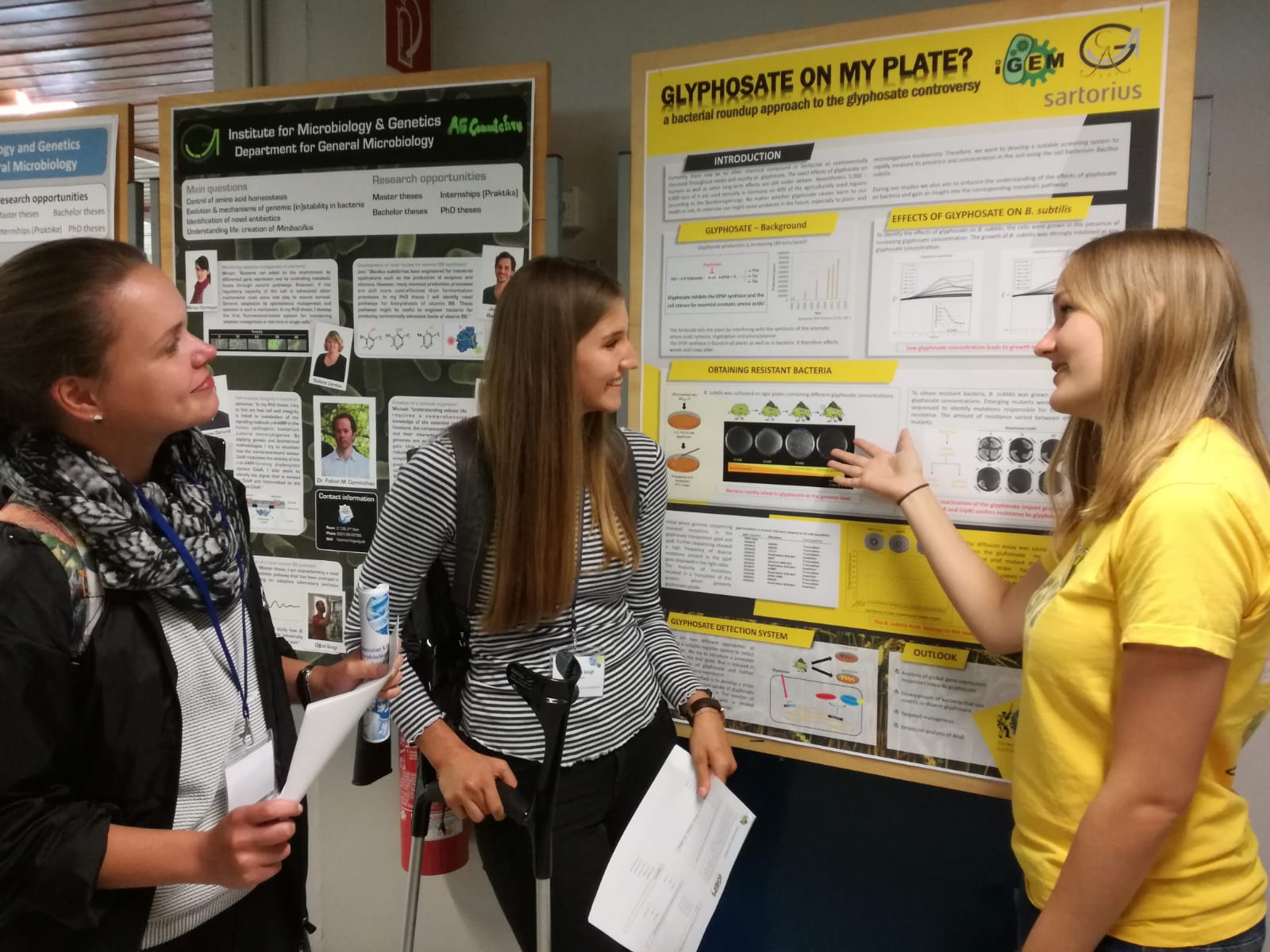 Rica presents our iGEM project to an interested group of new students.

We were very busy this weekend. While two of our members went to the German iGEM Meetup in Marburg we presented our poster and work to the new Master students of the Molecular Lifesciences: Microbiology, Biochemistry and Biotechnology and Developmental Biology study program of our University. Through that we inspired the upcoming generation to take part in next years iGEM competition and tought them ways to adress crucial problems to make the world a better place, using synthetic biology.

Most people would agree that there is too much unfiltered material about glyphosate on the internet. Hence, we wanted to directly talk to the public to check on their state of knowledge and what they really know and think about glyphosate. Therefore, we packed our poster, together with some props and survey sheets and travelled to the Gänseliesel in the heart of Göttingen to uncover the opinion, knowledge and wishes of the people. 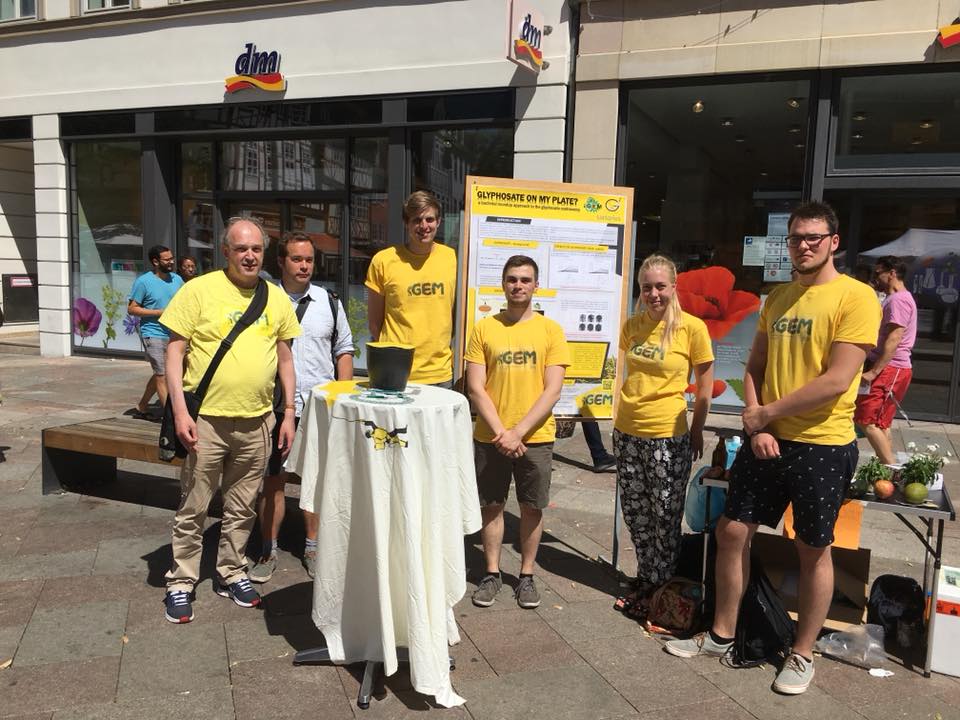 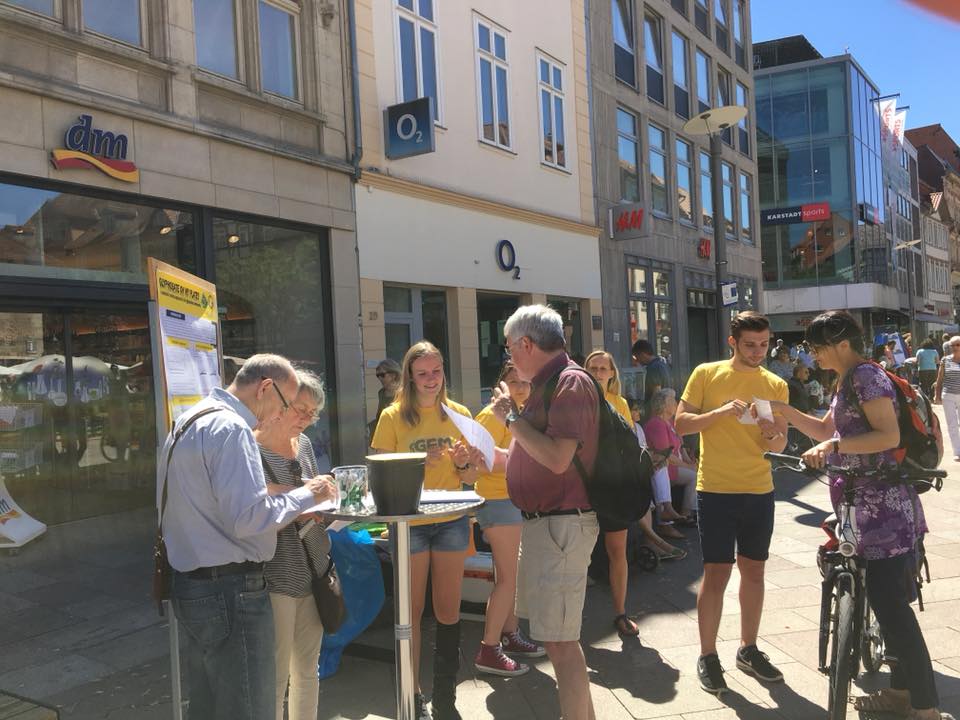 A nice day in the heart of Göttingen to update your knowledge over glyphosate.

This booth might seem small but there were several things to discover. For once, of course, the poster, that helped us to explain who we are and what we do. It also showed the current status of our project. What do you know about glyphosate? Can you tell us in which of these food items glyphosate was detected? Click on the pictures to find out:

A general concern about glyphosate is its impact on biodiversity in the soil. Since glyphosate was first introduced as an antibiotic, its accumulation in the soil may also influence the biodiversity of bacteria. There are approximately between 100 million and 1 billion bacteria found in a teaspoon of productive soil. These Soil Bacteria have a diverse set of skills, which allows them to act as one of the greatest “real-life” influencers on earth.

However, most of the visitors had only a narrow idea about what microorganisms are, what they do and where to find them. To illustrate and exemplify with how many different microbes glyphosate may interfere in the soil, visitors could participate in a small experiment, where they could leave there microbial fingerprint on a BHI agar plate. To check the microbial diversity on the hand of each participant we incubated the plates at 37°C over the weekend and published the results on our Facebook page in the folder "Infostand Göttingen". Check out whats on your hand that you can’t see! Small hint: washing your hands with soap for at least 30 seconds helps to fight against infection! You want to know how to properly wash your hands.

During our human practice events we realized that most people do not have enough information about the herbicide glyphosate but are very interested in getting to know more about the topic. Therefore our iGEM Team invited to a panel discussion with the topic “Glyphosate on my plate?-Chances and risks of the herbicide” on the 12th of July in the Adam-von-Trott-Saal of the old Mensa in Göttingen which had the perfect ambience to discuss this controversial topic. 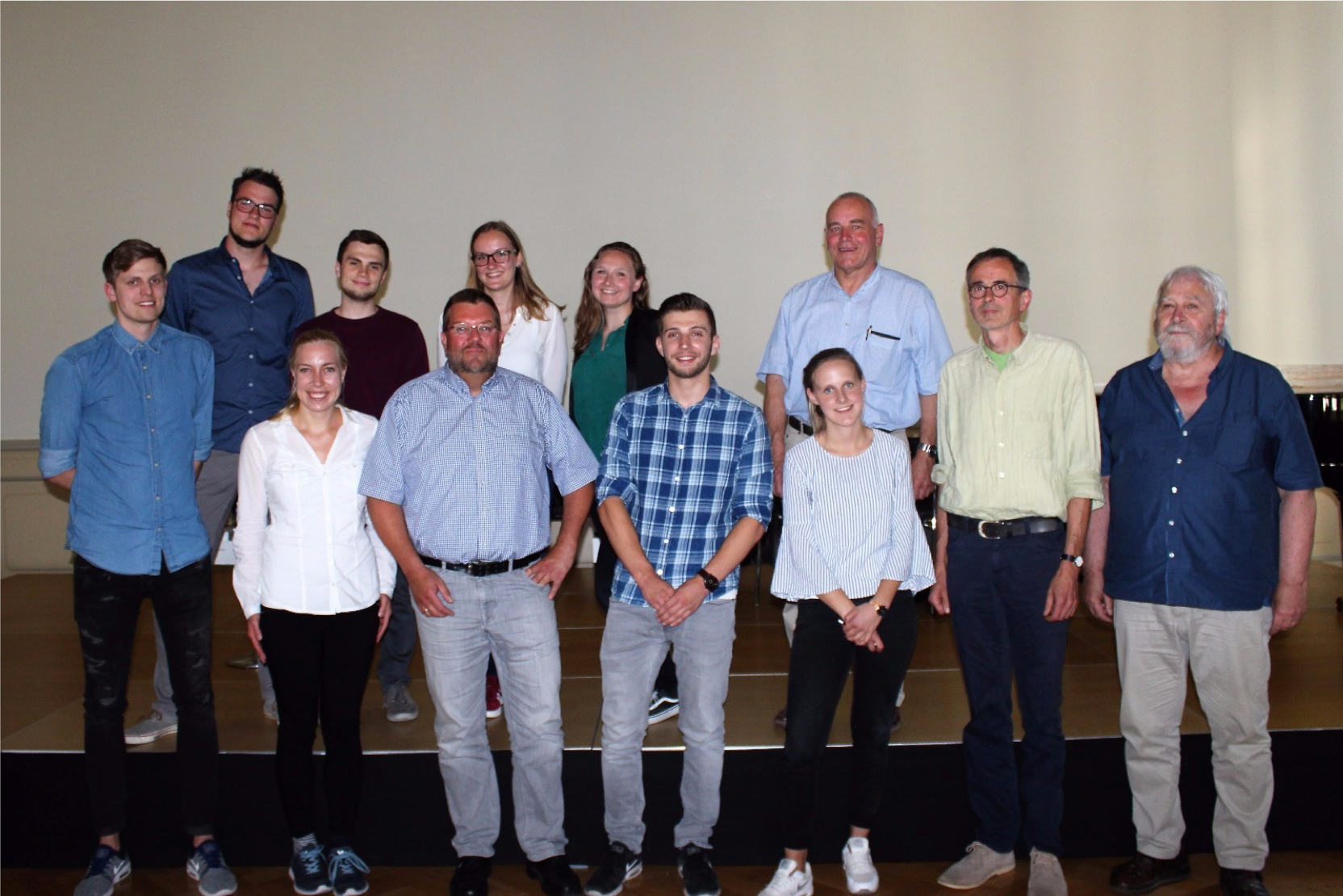 Our Team after the panel discussion together with our guests.

The event started with an introduction of our project by our team member Jonas in order to inform the very diverse audience about the iGEM competition, why we are participating, about what glyphosate is, the current state of the research and of course about our project and aim to find a solution to this controversially discussed herbicide.

Afterwards Robert and Marie of our team introduced our four guests (from left to right) Horst-Henning Steinmann of the centre for Biodiversity in Göttingen, Werner Wille of the “CDU” of Göttingen, Achim Hübner of the “Landvolk Niedersachsen” and Harald Wiedemann of “die Grünen” of Göttingen. 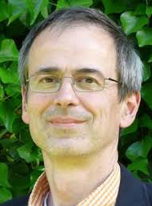 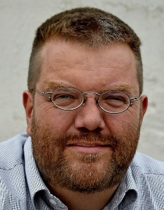 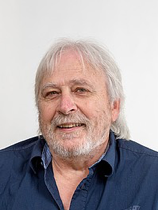 The panel started the discussion about the wide application of glyphosate in the agricultural areas of and around Göttingen. Lower Saxony, which Göttingen is part of, is known as the number one state of Germanys agriculture and produces for example almost half of the total german potato yield.

Harald Wiedemann expressed his severe concerns about the biodiversity and the extinction of specific species due to the use of glyphosate and other herbicides. He and his party are also part of the initiative „Stopp Glyphosat“ to reduce the use of a herbicide which long-term effects are not known yet.

Achim Hübner however pointed out that the use of glyphosate is essential in order to guarantee the high amount of yield and the low prices of food in the supermarkets. In addition, he said that we never know all the side effects of the substances that we consume and therefore one cannot forbid only one specific herbicide on spec.

When our team members asked about an alternative for glyphosate Horst-Henning Steinmann stated that the current alternative to glyphosate are non-chemical methods such as ploughing, this however is more expensive and takes more time. He also said that glyphosate is the cheapest and most effective herbicide available at the moment and pointed out that the side effects of alternative herbicides are also not known yet. However he is also in favour of the reduction of the wide use of glyphosate especially in area where it is not a 100% necessary. Werner Wille agreed with the point of view of Achim Hübner and would see the act of forbidding glyphosate as populist.

After the very diverse and motivated discussion of our guest the audience also asked a few questions. This was very interesting because it was a very versatile audience of students of agriculture, members of the BUND Göttingen and even farmer of farms close to Göttingen. In the end it can be said that even though the panel discussion lasted for one and a half hours there is still much more to talk and discuss about.

The result so far was that there is no alternative at the moment, especially when the people are not willing to pay more for their food in the supermarket, even though the impact of glyphosate on the biodiversity could be severe. All in all the panel discussion was a huge success and we thank all of the participants for coming!

Goettingen offers many possibilities for young scientists to enhance their lab skills and work together as a team. One of these is the XLAB where young students in the age of 17-22 have the opportunity to come together for a month and work in groups on current scientific topics. The future scientists pick up new lab skills and discuss issues, while exchanging their knowledge. This reminded us of our own iGEM project. We took the opportunity to present our topic and get in touch with the students and supervisors to gain some extra opinions on our progress. 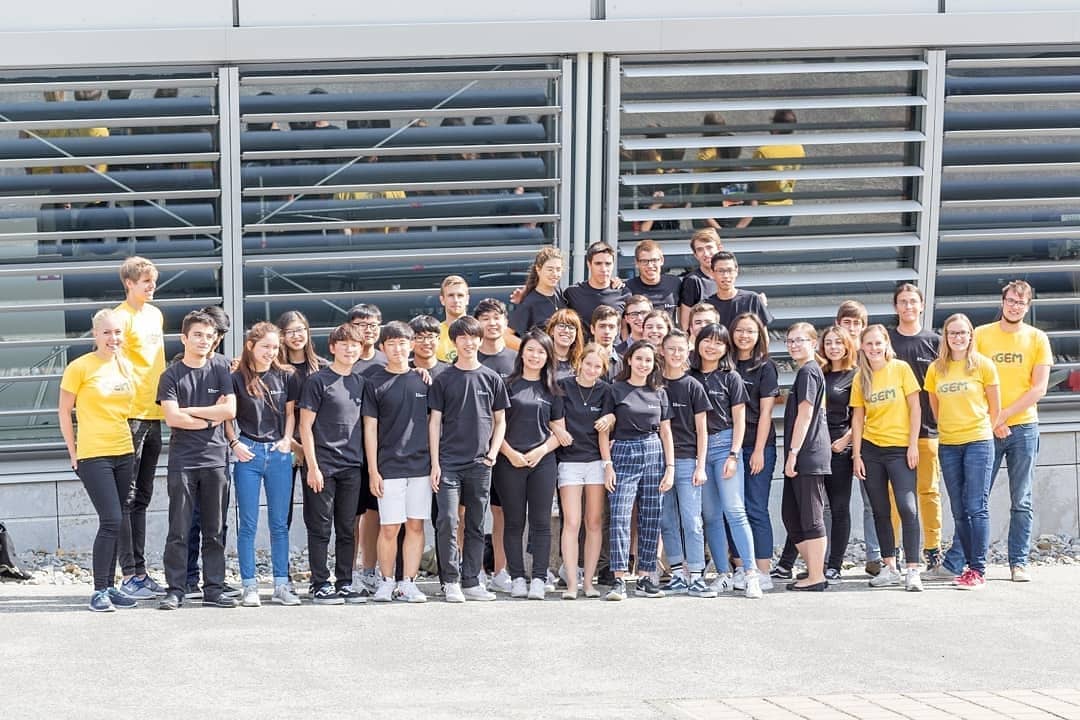 Our group joins the XLAB students to give insights into our project.