What is the beginning of our project?

In the universe observed by human, the Earth is undoubtedly one of the most beautiful planets, but the land on which we live is gradually dying.Soil, as a resource that is difficult to regenerate, its importance is irreplaceable and self-evident. As the main area of human activities on the surface of the earth and natural filtration devices, land naturally bears most of the pollutants. In China, more than one-tenth of the cultivated land is polluted. Soil pollution has seriously affected the sustainable development of food safety and agriculture, and has become a major obstacle to solving the world food problem.

Conventional repair methods are costly, so the application of synthetic biology methods gives microbes good degradation characteristics, making bioremediation an economical and effective option. We want to apply our expertise to protect this planet.

However, in the existing research, is the main research substrate. The is an animal-inhabited bacteria that is difficult to proliferate in a natural environment with varying conditions [3] . Therefore, we intend to transform a new microorganism as a site for environmental restoration, .

First, it belongs to the genus Pseudomonas.The members of the genus demonstrate a great deal of metabolic diversity and consequently are able to colonize a wide range of niches. These give it an incredible ability of biosynthesis and bioremediation [4] .has this unparalleled advantage in heterologous expression.

Second, many of the representatives of the genus Pseudomonas are pathogenic [5] , such as , while is not pathogenic to mammals and has passed the acute toxicity test of the Ministry of Agriculture of China [6] . It can be released commercially or directly into the field. Moreover, it is a plant-promoting bacterium [7 ] that combines with green plants to further enhance its bioremediation ability.

Finally, is a model strain with a clear genetic background for genetic modification.

When compared to platform organisms such as Escherichia coli, the toolkit for engineering is under developed. Heterologous gene expression in particularis problematic.It is vital that a flexible set of molecular genetic tools be available. In other organisms, tuning protein expression can be very important for achieving increased yields from engineered pathways, but there are no well-characterized promoter libraries in to enable rational tuning of protein expression[8 ].

To improve the toolkit, we organised a library of native promoters (n=25). We used Luciferase Reporter Assay Kit to characterize the strength of each promoter. Promoter strength prediction in was then achieved by mathematical modeling.

In our model，encode each three-base sequence with quaternary number(A,T,C,G represents quaternary number 0,1,2,3 ),and then get a vector with 64 dimensions from AAA to GGG, which calculates the frequency of appearance for each type in DNA sequence [9].We preliminarily assume that there is a simple linear relationship between the 64 components of this vector and the final result, and preliminarily confirm our hypothesis by comparing the difference between calculated value and measured value by solving sparse equations.Subsequently, we further strengthened our model by using the neural network model with stronger stability and more relevant parameters, and obtained an algorithm to predict the promoter strength.

In addition to the formation of the promoter library, we also constructed a nicotine-degrading engineered bacteria using as the chassis.

Cigarettes contain over 4000 chemicals, like countless toxic tea bags, which are exhaled and released into the air and the atmosphere.Nicotineis one of the most harmful ingredients in cigarette and is the biggest resistance to smoking cessation.In 1994, the US Environmental Protection Agency defined nicotine as "toxic hazardous waste." The 2013 review suggests that the lower limit causing fatal outcomes is 500–1000 mg of ingested nicotine, corresponding to 6.5–13 mg/kg orally. An accidental ingestion of only 6 mg may be lethal to children [10].

Besides toxic to humans, nicotine is also very soluble in water. This makes nicotine easy to seep into soils and groundwater and cause serious pollution. Moreover, nicotine relased in the environment can damage the normal soil microbial community [11] and affects the survival of pollinators, such as bees [12] . These can have far-reaching effects on the ecological environment.

There are several bacteria can degrade nicotine which include [13]. we decided to clone the nicotine degradation gene cluster (~30kb) and express it in our chassis. 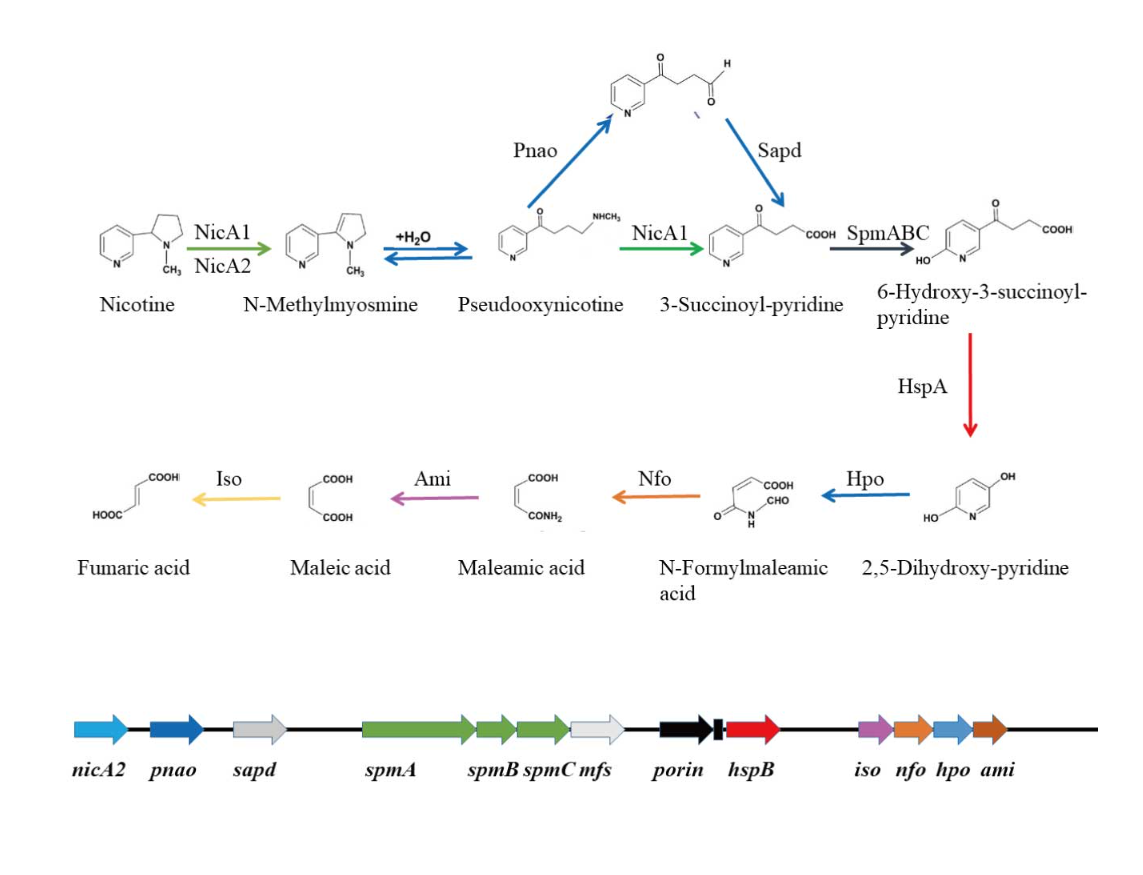 Because if the entire metabolic pathway is introduced into Pseudomonas fluorescens, it is a huge burden on the expression vector, and the product of the first half of the pathway is 2,5-DHP, which can be used as a precursor of various drugs and can be placed in the environment. Turns waste nicotine into treasure.

Furthermore, we used promoter with different strength to control the expression of key enzyme, NicA2.

Driven by the needs of functional genomics, DNA engineering by homologousrecombination in Escherichia coli has emerged as a major addition to existing technologies. Two alternative approaches, RecA-dependent engineering and ET recombination, allow a wide variety of DNA modifications, including somewhich are virtually impossible by conventional methods. These approaches donot rely on the presence of suitable restriction sites and can be used to insert,delete or substitute DNA sequences at any desired position on a target molecule. Furthermore, ET recombination can be used for direct subcloning and cloning of DNA sequences from complex mixtures, including bacterialartificial chromosomes and genomic DNA preparations [14]. The strategies reviewed in this article are applicable to modification of DNA molecules of anysize, including very large ones, and present powerful new avenues for DNA manipulation in general.

Furthermore, we have found some small defect on the recombination vector and did some improvement about it.

In conclusion, we constructed a promoter library in and used a mathematical model and the resulting data to achieve promoter strength prediction. In order to further verify that our promoter can function well in the fluorescent chassis, we constructed a nicotine-degrading engineered strain and used different strength promoters to regulate the expression of key enzymes to achieve optimal degradation efficiency. In addition, we have introduced and improved a new method of gene recombination for iGEM, Red/ET recombination system, which can more easily realize direct cloning of large fragments, multi-fragment assembly and seamless modification of DNA sequences.

[2]GaoFeng. Difficulties in the restoration of heavy metal pollution in cultivated land

[10]Mayer B (January 2014). "How much nicotine kills a human? Tracing back the generally accepted lethal dose to dubious self-experiments in the nineteenth century". Archives of Toxicology. 88 (1): 5–7

[11]Mayer B (January 2014). "How much nicotine kills a human? Tracing back the generally accepted lethal dose to dubious self-experiments in the nineteenth century". Archives of Toxicology. 88 (1): 5–7