Lactobachill has to have the ability to secrete our anti-inflammatory molecule to stop the IL-6 pathway once it has sensed an increase in the nitrosative stress levels of the body. To do so, we investigated in the literature about different secretion pathways that bacteria use and we came up with the Sec-dependent pathway, shared between many bacterial species. The transport of material from the cytoplasm to the extracellular matrix through this pathway is completely dependent on the Sec protein. The latter detects specific sets of signal peptides attached to proteins and carries them to the cytoplasmic membrane, where the peptide is cleaved and then the protein is released to the perisplamic region. We realized that if we attached one of these signal peptides to our heterologous protein, our microorganism would be able to secrete it. Before we adventured ourselves into the mysterious waters of using synthetic biology on the Lactobacillus genre, we wanted to try this strategy first in our model organism: E. coli as a proof of concept. To do so we designed two genetic constructs where two different secretion peptides (NSP2 and NSP4) were attached to the N-terminus of the fluorescent iLOV reporter protein, followed by a histidine tag to facilitate purification of the reporter and further detection assays. Both constructs are shown in the following figures:

Figure 1. Genetic construct for the characterization of the NSP2 signal peptide. The T7 promoter precedes the iLOV fluorescent protein which has the Sp2 attached to its N-terminus and a His tag attached to its C-terminus.

Figure 2. Genetic construct for the characterization of the NSP4 signal peptide. We can observe that the expression of the iLOV reporter is regulated by the T7 promoter and that the protein has the Sp1 in the N-terminus and a His tag in its C-terminus.

To have a better experimental design, we needed to design two other constructs, a positive control and a negative control. For the positive control, we followed the same layout except we used an already characterized signal peptide: DbASS, which is already found in the iGEM registry. As for the negative control, we did the same thing, but of course we did not attach any signal peptide to the fluorescent protein. Both genetic designs are shown in the following figures:

Figure 3. Genetic construct for the characterization of the NSP2 signal peptide. We find the T7 promoter controlling the expression of the iLOV protein which has the DsbAss secretion peptide attached to the N-terminus of the protein and the His tag enclosed to the C-terminus of the reporter. 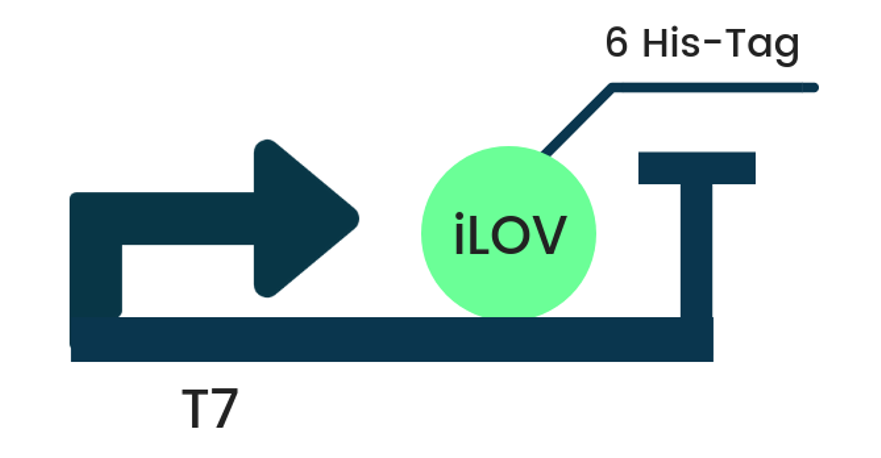 Figure 4. Negative control for the experimental design. T7 promoter that enables the expression of the iLOV reporter with a 6 His-Tag attached to it.

Now that our constructs had arrived, the first thing we did was clone them inside the pSB1C3 plasmid. The details of the experimental conditions we followed can be observed in the Protocols section of this wiki. Afterwards, we proceeded to transform our E. coli BL21 strain using the chemical method.

Although our bacteria were able to grow in chloramphenicol, meaning they had in fact been transformed, we could not be sure if they only had the plasmid itself or actually our genetic constructs. That is why we performed miniprep to each colony, digested it and ran the results in an electrophoresis gel, which can be observed in Figure 6.

Figure 6. Digestion gel for the NSP2, NSP4, Positive control and Negative Control constructs. We can observe in the bottom of the gel the 4 bands corresponding to our 4 genetic designs and moving up in the gel we see the 4 bands of the linearized plasmid pSB1C3. Both cases fell within the expected range of molecular weight according to the ladder.

Now that we knew that we had our transformed colonies and that the ligation had been performed successfully, we were able to move forward and proceed with the induction, synthesis and purification of our proteins.

As we know, iLOV is a fluorescent protein and since a signal secretion peptide was attached to it, it would have been easy just to place samples of the supernatants inside a fluorescence reading equipment to evaluate whether the protein was being properly released to the media. However, we could not take ahold of a fluorescence reader because of the lack of resources. Still, we were able to isolate our protein due to the histidine tag that was placed at the C- terminus of the iLOV protein in each of our 4 constructs. First, we filtered the supernatant using a 10 kDa Amicon membrane to concentrate our protein and then using a His purification kit provided by Promega®, we were able to purify our desired protein. To verify this, we ran our sample through a polyacrylamide gel. In Figure 7, we can observe the results of this SDS-PAGE assay. We can note the bands fall where they were expected to be between the 10 and 15 kDa of molecular weight. Since there was not a signal peptide attached to the negative control, iLOV was not secreted to the media, which is why we could not see it in the SDS-PAGE of the supernatant.

Figure 7. Polyacrylamide gel of the SDS-Page we performed to the concentrated and purified supernatant containing the fluorescent protein: iLOV, secreted by our transformed microorganisms.

Even though the histidine purification kit was very specific, we still had coelutions in our polyacrylamide gel and we could not be a hundred percent sure that the bands we saw only corresponded to the iLOV protein. At last, to finish with the characterization we executed a Western Blot assay using that very same SDS-Page gel. The antibody we used was specific for the 6-His tags we had incorporated into our recombinant proteins. This can be better visualized by taking a look at Figure 8. 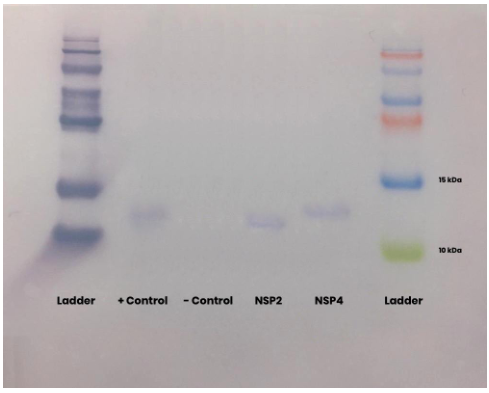 Figure 8. Western Blot PVDF membrane showing our recombinant protein had a functional His tag that could be detected in immunological assays.

We feel very pleased about what we achieved during this experimental part because we were able to characterize two new and different signal peptides that will be useful not only for us, but for everyone else who wishes to perform secretion-related experiments and projects using E. coli. We did not just contribute with these new parts, but made and tested a whole experimental design with both positive and negative controls that made our results more valid. Moreover, we incorporated in our designs the possibility of using different purification and detection methods such as affinity chromatography or Western Blot by the use of histidine tags. However, we are aware that further studies need to be carried out to now test the efficiency of this proposed secretion mechanism.

Plan A and Plan B optimized for E. coli


In order for Lactobachill to help with the treatment and prevention of both depression and anxiety, it needs to block the IL-6 trans pathway. As stated before, to do this we propose two different strategies. The first one consists on the secretion of the IL-6 soluble signal transducer, sgp130, which will bind to the IL-6-soluble receptor complex and prevent it from attaching to the cell membrane; thus stopping this unspecific inflammation pathway. The genetic design that will enable Lactobachill to synthesize this molecule is found in Figure 9. Again, we decided to test this strategy first using our model organism E. coli, so this construct is optimized for it.

Figure 9. Plan A genetic construct optimized for E. coli. First we find the PBAD constitutive promoter that enables the translation and transduction of the NsrR repressor protein that will attach to the PyeaR promoter and modulate its expression. Next to the NsrR gene we find the iLOV reporter that will be synthesized at the same time as the repressor and will help us keep track of its expression. After the terminator we find the inducible pyeaR promoter that starts the expression of the soluble signal transducer. Attached to sgp130 we find the NSP4 secretion peptide as well as another reporter protein: mCherry.

The genetic design for plan A was successfully synthesized and cloned into the pSB1C3 plasmid, which later was inserted into E. coli. To test this, a PCR for the transformed colonies was carried out and then ran inside an electrophoresis gel, which can be observed in Figure 10. 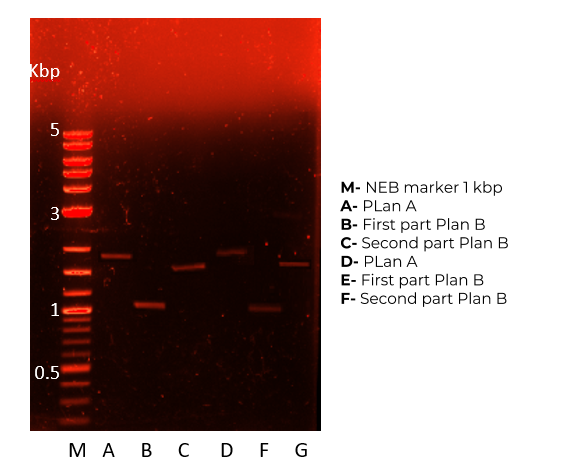 Figure 10. Electrophoresis gel corresponding to the PCR performed to transformed colonies transformed with both the Plan A and Plan B strategy.

As we mentioned, we had a second strategy for Lactobachill to block the trans signaling IL-6 pathway, which we decided to call Plan B. Plan B consists on the secretion of a mutated soluble IL-6 receptor, Mutgp80, that will bind to IL-6 forming a complex that cannot attach to the membrane-bound transducer and this way is not able to continue with the inflammation pathway. The genetic construct that will make Plan B possible in E. coli is shown in Figure 11. However, since the genetic design was rather big to be synthesized in a single piece of DNA and we could not afford customized DNA synthesis, we had it split into two parts.

Both parts were inserted into our model organism using the same strategy that was used for Plan A. The electrophoresis gel corresponding to the colonies PCR containing both parts are also shown in Figure 10.

Unfortunately we had neither time nor enough resources to characterize these parts and actually test their functionality. Still, both parts were submitted to the registry and we are still working on the project to bring Lactobachill close to those who need it the most.