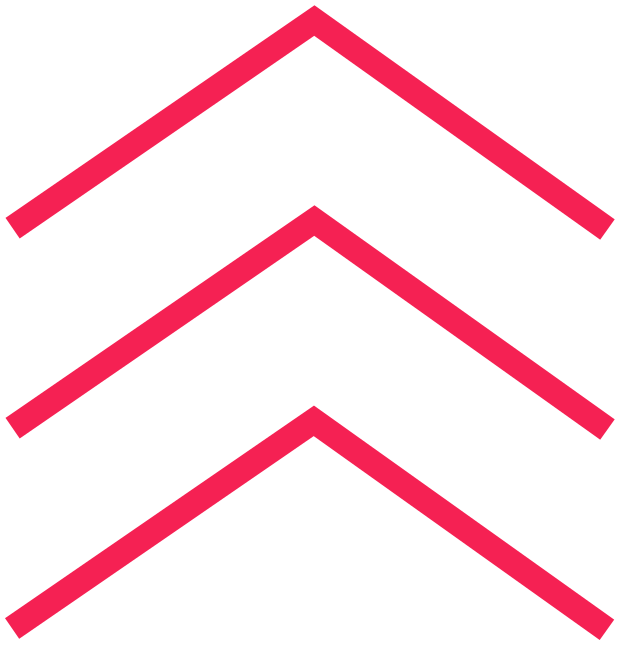 Our team will use synthetic biology to address insufficient access to contraception by engineering a progesterone-producing yeast. We will construct our gene cassettes and insert them into the Yarrowia lipolytica genome in three parallel experiments. In the preliminary experiment, we will use the strain Y. lipolytica str. FKP393 which has the auxotrophic markers leu2 and ura3 for selection. We will engineer a second strain named LipLox, that will contain the gene for uracil flanked by lox sites loxP and lox71 for use in experiments 1, 2, and 3 below. This will allow us to have a yeast strain that contains lox sites, as well as a strain that now has uracil in a designed location that we can swap in or out as a selectable marker.

The first step in our project was to engineer a strain of yeast with an genetic marker in the location we plan on inserting the genes for the progesterone biosynthesis pathway. We also use Cre-lox integration in later experiments, so we needed to enter lox sites into our strain as well. Because Y. lipolytica str. FKP393 is auxotrophic for uracil, we can replace this gene in a specific location as a marker for a second homologous recombination (HR) experiment. When we perform the other HR experiment, the uracil gene will be swapped out, and we can use 5-FOA media as our selection tool.

We designed homology arms (HA) for homologous recombination that span 1 kb upstream and downstream of the ade2 gene in Y. lipolytica str. FKP393. To prepare HAs for this experiment, and Experiment 1, we amplified the HAs out of the Y. lipolytica str. FKP393 genome using primers flagged with Gibson overhangs (GOs) homologous with the gene cassette ends and the linearized pUC19 backbone as seen in Figure 1. This ensured that the HAs were ready for GA after being amplified out.

We performed colony PCR to amplify the HAs. After several failed attempts, we found that we needed to extract the genomic DNA (gDNA) from Y. lipolytica str. FKP393 and then PCR-amplify the HAs out of it. To extract the gDNA from Y. lipolytica str. FKP393, we used lithium acetate and sodium dodecyl sulfate (SDS) to lyse the cells, then precipitated the gDNA with ethanol. See our Protocols section below for Yeast DNA Extraction protocol. We used touchdown PCR with the gDNA and flagged primers to amplify the arms out. We checked the success of PCR amplification using gel electrophoresis.

To create LipLox, which contains the two lox sites used in experiments 2 and 3, as well as the ura3 gene that will act as a selective marker in all experiments, we will Gibson assemble the pOPPY-UC19-yXXU plasmid shown in Figure 2. 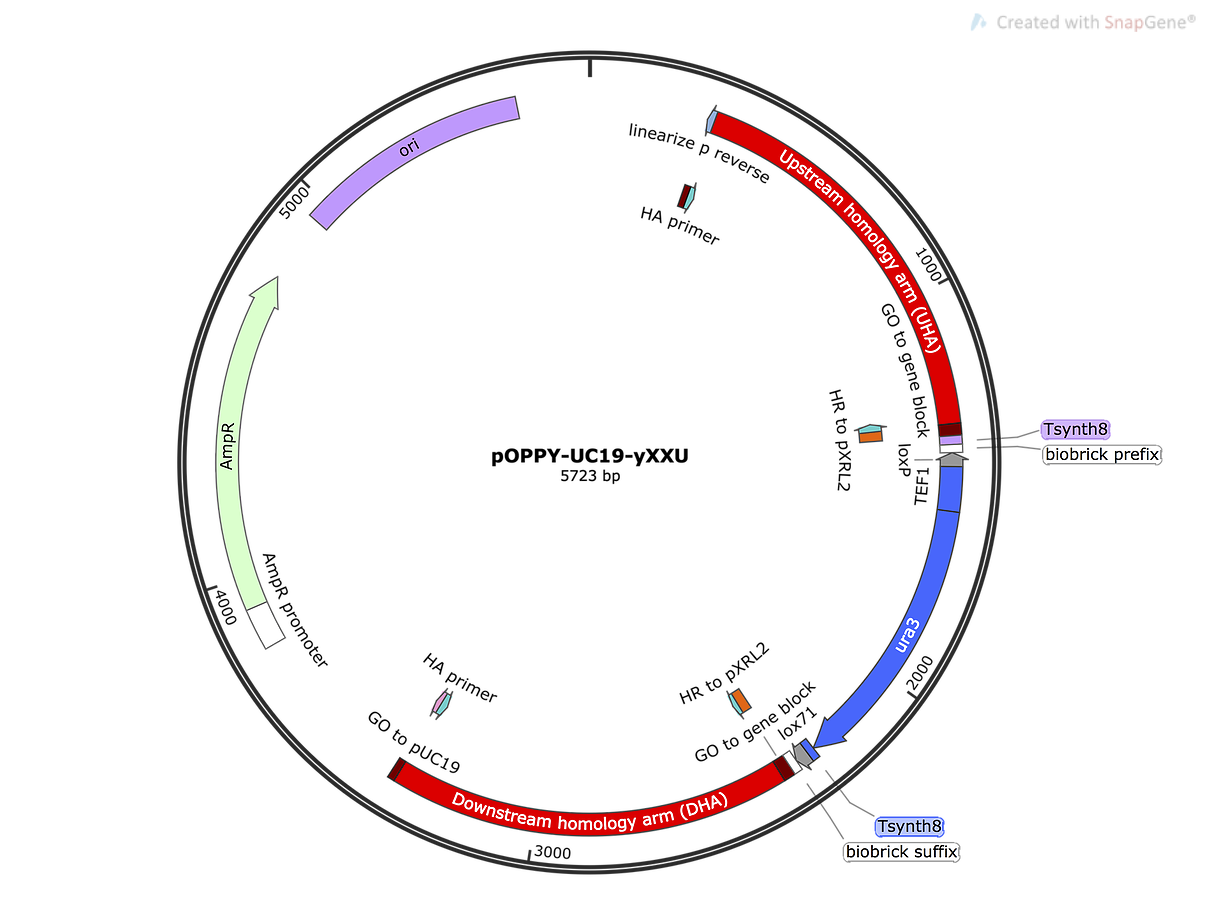 This plasmid contains our loxP-ura3-lox71 gene block, surrounded by the UHA and DHA to Y. lipolytica str. FKP393 genome, in the linearized pUC19 backbone. The HAs were designed with ends homologous with loxP-ura3-lox71 gene block and pUC19. This design enables GA to seamlessly stitch together all four fragments resulting in pOPPY-UC19-yXXU seen in Figure 2. Because HR requires a linear construct, we will amplify out the product from UHA to DHA. We will perform HR and the loxP-ura3-lox71 fragment will be exchanged for the ade2 gene region between the HAs in the Y. lipolytica str. FKP393 genome (Figure 3).

The yeast recombinants, which were previously auxotrophic for uracil, will now contain ura3 and will grow on uracil-deficient media, allowing us to select for them. As a second method of confirmation, we will extract DNA from transformed Y. lipolytica str. FKP393 cells and use PCR to screen for successful mutants. We will know that we have successful HR results if we observe single bands at the appropriate size (4 kb) on a 1% agarose gel. 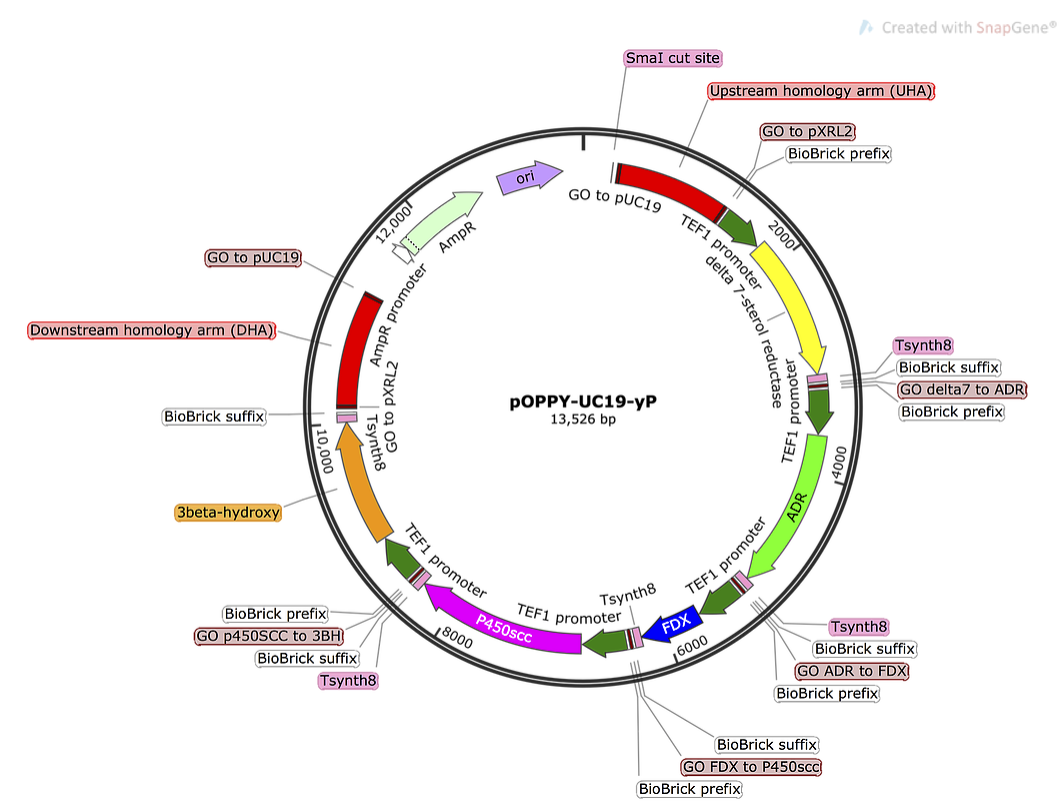 Figure 4: pOPPY-UC19-yP plasmid in detail. Contains UHA, DHA, and the genes ∆7-sterol reductase, ADR, FDX1, P450scc, and 3β-HSD, each of which has a TEF1 promoter, Tsynth8 terminator, and Gibson overhangs (each denoted by GO) to assemble the fragments together, and into the plasmid backbone. Will be used to engineer LipLox with the progesterone pathway. BioBrick prefix and suffix are described in “BioBrick” section.

HR requires a linear fragment, so we will amplify out our construct from UHA to DHA and perform HR to recombine the construct into the LipLox genome. HR will exchange the previously inserted ura3 from LipLox with the gene cassette from pOPPY-UC19-yP. The new yeast strain, named Y. lipolytica str. PoPPY, will be uracil-deficient again, so we will test for successful integration by growing the yeast on 5-Fluoroorotic acid (5-FOA) ura+ media to select for our new strain containing our gene cassette as seen in Figure 5.

Experiment 2 will combine two well-studied experimental techniques. Yeast mediated cloning, which can assemble fragments with Gibson overhangs inside of a yeast cell; and Cre-lox recombination, which can perform a homologous-recombination-like insertion where there are corresponding lox sites. We will use YMC in S. cerevisiae, due to that technique being well studied in that organism, to create the plasmid pOPPY-XRL2-yP (Figure 6) that contains the gene cassette required to complete the progesterone biosynthesis pathway. We will isolate this plasmid and then transform it into LipLox. 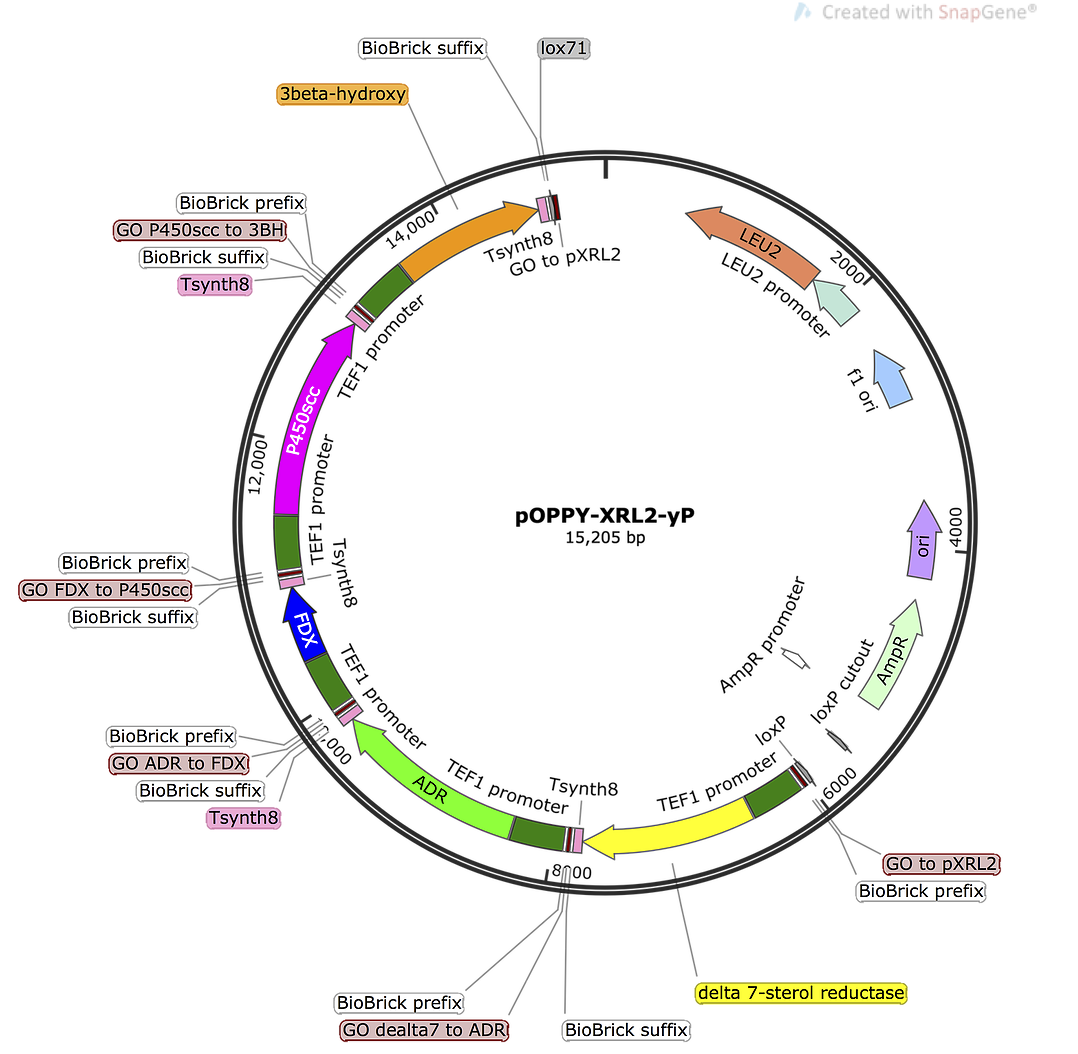 Figure 6: We will linearize the pXRL2 plasmid using inverse PCR to remove one loxP site (loxP cutout). We will re-circularize and re-linearize the plasmid with one loxP site, pOPPY-XRL2-yX. We will insert the genes ∆7-sterol reductase, ADR, FDX1, P450scc, and 3β-HSD, each of which has a TEF1 promoter, a Tsynth8 terminator, and Gibson overhangs (each denoted by GO) to assemble the fragments together, and into the plasmid backbone during YMC to create pOPPY-XRL2-yP.

We will linearize pXRL2 using PCR and remove one of the two loxP sites to produce pOPPY-XRL2-yX. We will re-circularize pOPPY-XRL2-yX before re- linearizing with PCR primers in a region that is homologous with both ends of the gene cassette. We will insert a re-linearized pOPPY-XRL2-yX with the five pathway genes into S. cerevisiae for yeast mediated cloning. We will miniprep out the pOPPY-XRL2-yP plasmid and transform into E. coli. We will insert our gene cassette into the LipLox genome using Cre-lox with lox sites entered in experiment 0 to produce Y. lipolytica str. PoPPY as shown in Figure 7.

We will amplify pOPPY-XRL2-yP in E. coli and isolate the plasmid using the ZyppyTM Plasmid Miniprep Kit from Zymo Research. We will transform pOPPY-XRL2-yP and the pSH47 plasmid that contains the genes for Cre recombinase into LipLox and perform Cre-lox recombination. The pXRL2 plasmid contains one loxP site upstream of the gene construct, and the downstream end of the gene construct contains the lox71 sequence necessary for Cre-lox recombination. The presence of galactose will induce the expression of Cre recombinase and trigger site-specific recombination between the incompatible lox71 and loxP sites on pOPPY-XRL2-yP and in the LipLox genome to make PoPPY as in Figure 7. The five pathway genes on pOPPY-XRL2-yP and ura3 gene in LipLoxura3 gene through non-selective screening and allow us to select for our desired cells using 5-FOA.

Experiment 3 will be a novel undertaking; while YMC has been tested in Yali, Cre-lox has not. In Experiment 3, we will use YMC in LipLox to create the plasmid pOPPY-XRL2-yP (Figure 6) to insert our gene cassette into the LipLox genome to produce Y. lipolytica str. PoPPY, shown in Figure 8.

We will insert pOPPY-XRL2-yX with the 5 pathway genes into LipLox to create pOPPY-XRL2-yP (Figure 6). The pXRL2 plasmid contains one loxP site upstream of the gene construct, and the downstream end of the gene construct contains the lox71 sequence necessary for Cre-lox recombination. We will amplify pOPPY-XRL2-yP in LipLox, wait for YMC to completely assemble the construct, then transform the Cre recombinase gene-containing pSH47 plasmid into LipLox to perform Cre-lox recombination and create PoPPY.

Prior to beginning work on our own riboswitch, we decided to characterize the riboswitch biobrick part BBa_K2223004 made by the UCSC 2017 iGEM team, which is intended to detect vitamin b12. We wanted to collect this characterization data to help us better familiarize ourselves with how riboswitches work. We measured the fluorescence and OD600 of samples of E. coli in M9 minimal media and LB with various concentrations of vitamin b12 over a period of time to learn about the behavior of the promoter and the riboswitch itself.

We will amplify our pHR-D17-hrGFP plasmid by transforming it into E. coli using the NEB High Efficiency Transformation protocol for DH5-α competent E. coli cells. After we select for our successfully transformed colonies by plating them on luria broth / ampicillin (LB/ampicillin) media, we will perform a plasmid DNA isolation using the ZyppyTM Plasmid Miniprep Kit. We will measure the concentration of our plasmid isolations using NanoDropTM analysis, examine the identity using restriction digest, and will confirm them with Sanger sequencing. We will use PCR with primers RiLin(r)1 and RiLin(f)1 to linearize pHR-D17-hrGFP and simulate a blunt-end double strand break in the 3’ UTR of the hrGFP gene.

We will order five different DNA gene blocks from IDT, each containing our riboswitch expression platform, one of the five progesterone-specific aptamers describe in Contreras Jim ́enez et al. (2015), and two end sequences that will form overhangs homologous to the blunt-end sequences of the linearized plasmid (Win and Smolke, 2007; Contreras Jim ́enez et al., 2015). We will amplify these inserts using the Apt(f) and Apt(r) primers, which are specific to the HAs held in common by each of them. We will then Gibson-Assemble our riboswitch inserts into linearized pHR-D17-hrGFP.

Next, we will transform these experimental plasmids into DH5-α competent E. coli cells for amplification. After isolating these plasmids from E. coli, we will linearize the plasmids again using RiHA1(f) and RiHA(r) to create a linear portion of DNA consisting of the TEF(136) promoter, cyc1 terminator, hrGFP gene, riboswitch structure, and HAs suitable for integration into the Yali genome.

Following transformation into Yali, we will use replica plating to compare identical colonies in the absence and presence of progesterone. If any colonies show working riboswitch constructs, we will isolate and linearize plasmid DNA from these previous cultures using our yeast miniprep protocol, provided in appendix A.4, and PCR. We will then transform these linearized plasmids into Y. lipolytica str. PoPPY cells. Because of our aptamers high binding affinity, they are not suitable for measuring a relatively large dose of progesterone in a consumer’s culture. If one of our five aptamers shows functionality within our riboswitch structure, we will run trials using the column electrophoresis SELEX method described by Mosing and Bowser (2009) and random mutagenesis via error-prone PCR, which is described in a paper by McCullum et al. (2010), to identify variants that show a decreased sensitivity for progesterone which will trigger fluorescence at higher concentrations (Mosing and Bowser, 2009; McCullum et al., 2010).

After pellets formed, we dumped the excess media and added glass beads to each tube. We added hexane and MilliQ water to the tubes, and vortexed on high for five minutes. After the phase separation occurred, we extracted the hexane layer sitting above the water and beads, and transferred each sample to a new conical glass tube. We blew off the hexane to dry it, using air instead of nitrogen to avoid loss of sample. After the aqueous phase had been vaporized, the residue was resuspended in DMSO, and vortexed to ensure all material was dissolved. We then performed a dot blot using nitrocellulose blocked with BSA in TBS, and washed with TBS/TWEEN. We used anti-progesterone-HRP antibodies from Santa Cruz Biotech (sc-53423 HRP) for detection and imaged using a CCD imager.

Our teaching assistant, McKenna Hicks, taught us the following methods for primer design.

The following protocol was adapted from the ZyppyTM Plasmid Miniprep Kit procedure from Zymo Research.

The following protocol was adapted from the ZyppyTM Plasmid Miniprep Kit procedure from Zymo Research.

We adapted the following procedure from Looke et al. with advice from our teaching assistant, McKenna Hicks.

The following is a list of procedures we directly sourced for our project.