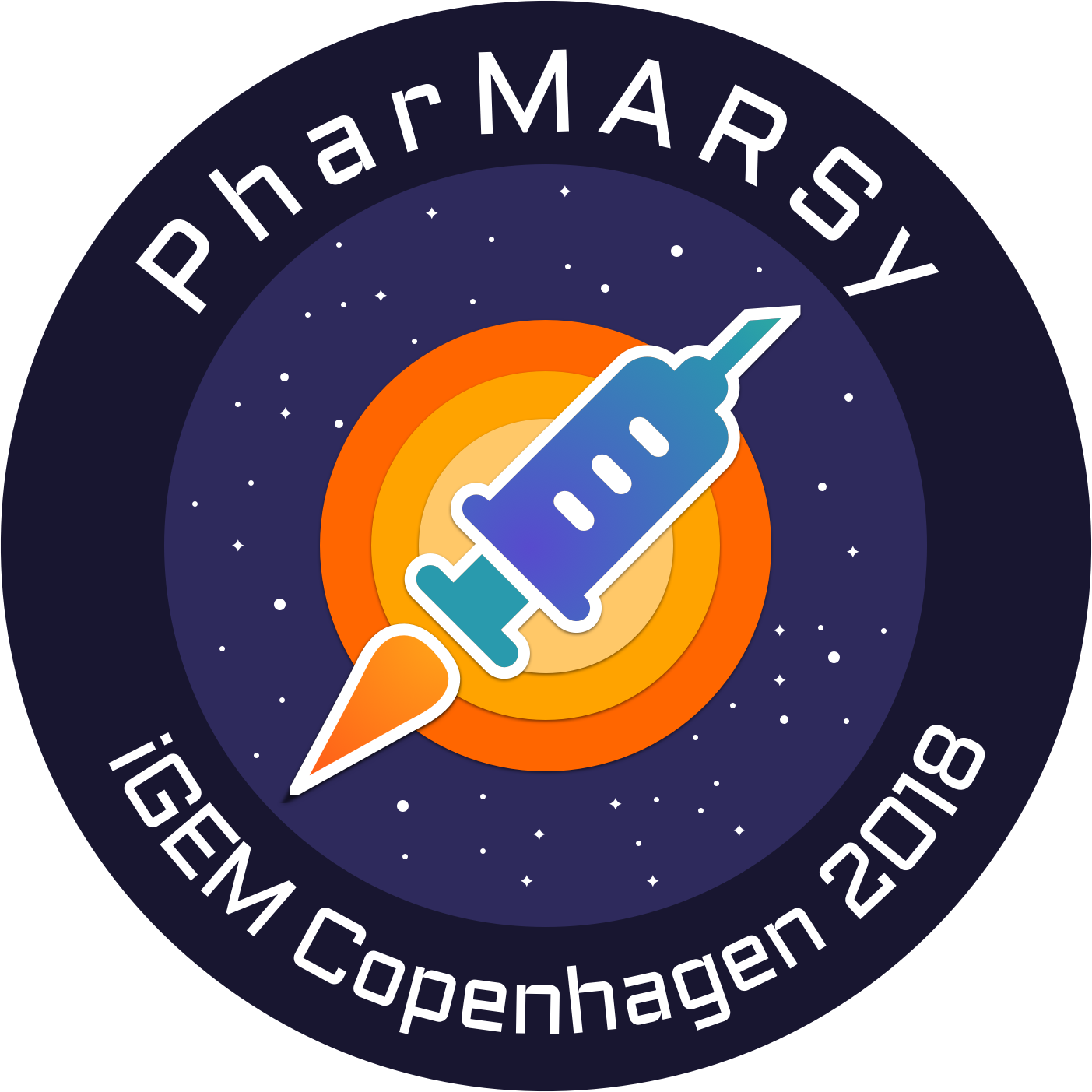 Modelling and design of chamber

The final product of PharMARSy, Protein Printer would be a device that allows for growth of bacteria in one chamber and secretion of pure protein into another. The chambers would be divided by a biomimetic membrane, which serves two purposes: it should allow for bacteria to secrete the protein through membrane into collection chamber using injectosome - a syringe-like protein structure, but at the same time it should be robust enough to prevent bacteria to crossing into lower chamber thus contaminating the protein solution.

The design of the chamber should therefore fulfill the following criteria:

Due to popularity of 3D printing and its relative accessibility we decided to print our own prototype. But it had to be designed first.

Design of our first Bacta_tank prototype

The first design of the chamber was made before deciding on what type of membrane to use. It was therefore crucial to keep the design open for changes and later modifications. 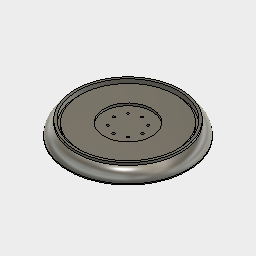 It was realised that the membrane will have to be somehow held in place, to prevent leakage and to allow for stirring of the media above it. The design was therefore improved to address that problem. One solution was to include another part that would hold the membrane in place as can be seen in figure 2 and 3.

Figure 2: Multicomponent design - Bacta_tank1 offers more yet at the cost of simplicity. It served as a template for further development, but was never printed. 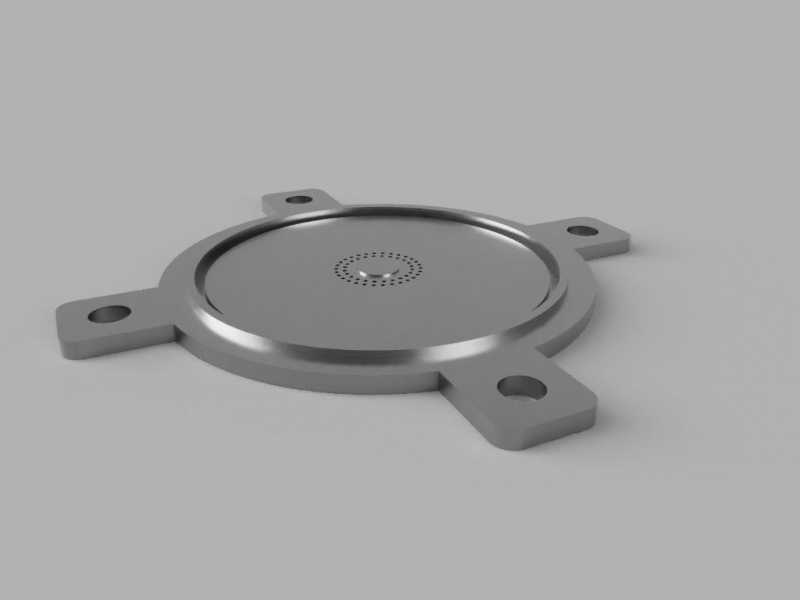 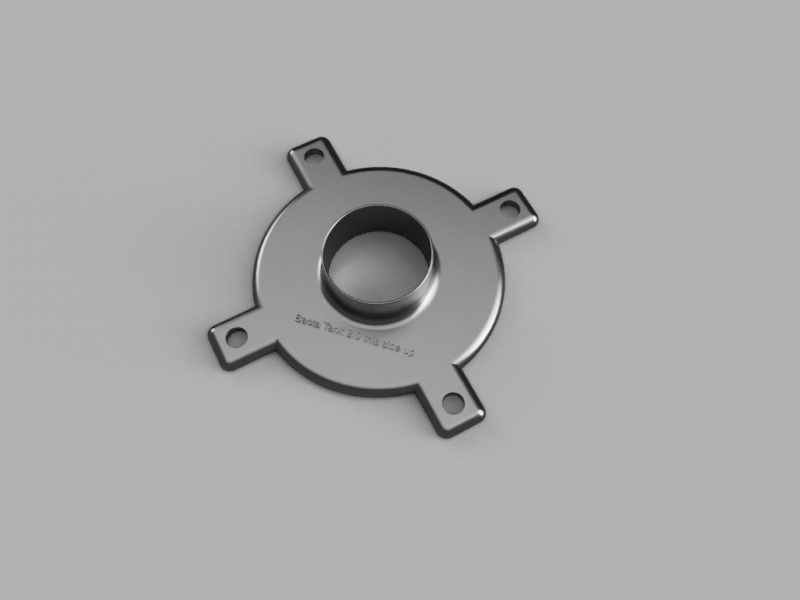 However all of the models described above are relatively complicated for handling, and not that easy to manufacture with 3D printers techniques available to us. If possible, we were aiming at designing a prototype that would be easy to produce and easy to handle.

A radically new design was needed - simpler and smaller.

The inspiration came from the very thing that we were trying to get rid of: the screws. Why having external, metal screws if one can design chamber components to be "big hollow screws?"

Inclusion threads inside the walls of chamber components meant that parts can be simply screwed one into another, eliminating any need of external holders or screws. Admittingly somewhat a challenge for a designer and a test of precision for 3D printer, at least it would be very simple for the end-user.

It is relatively simple to design a 2 components system where only 2 threads are used, however when having thread on both sides of the middle part (coloured blue in Figure 6), one has to pay attention not to "slice" with the threads through the walls of the body of the component. To make screwing easier, a hexagon extension was envisioned at the top of two upper parts allowing for use of tools if necessary.

An example of cross section can be seen in the following illustration (Figure 5). 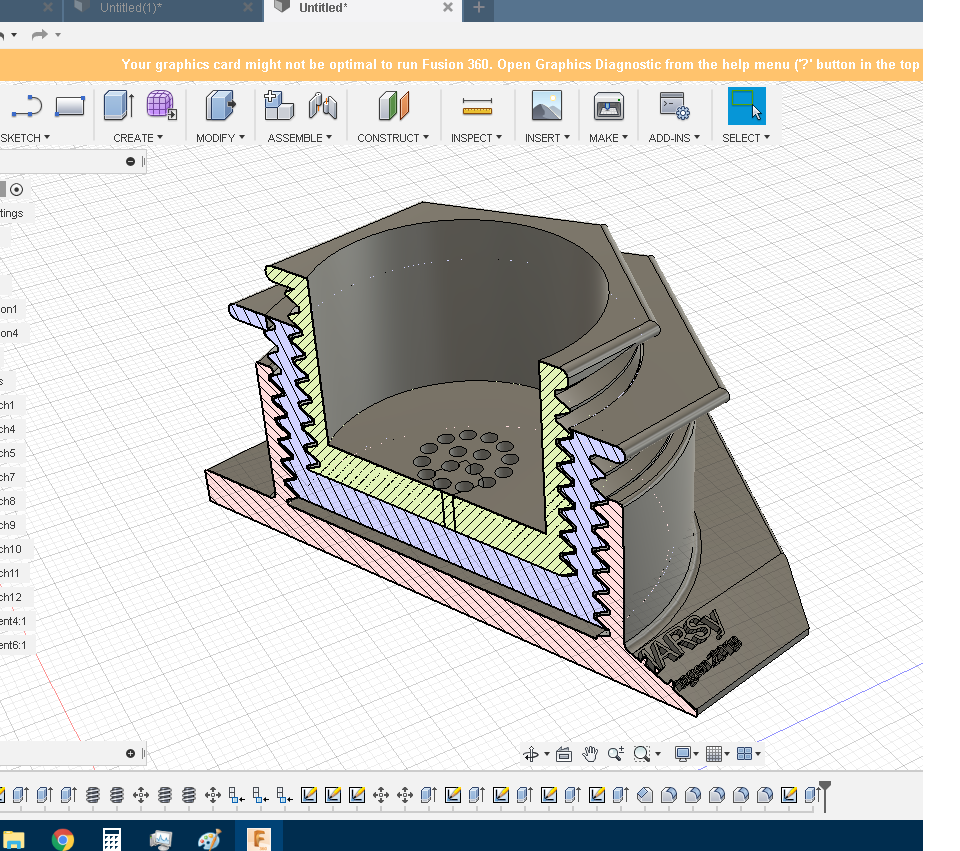 Figure 5: A cross section of design for Bacta_tank3. Components can be seen to fit nicely and a simulation was performed many times to check for any issues prior to printing. 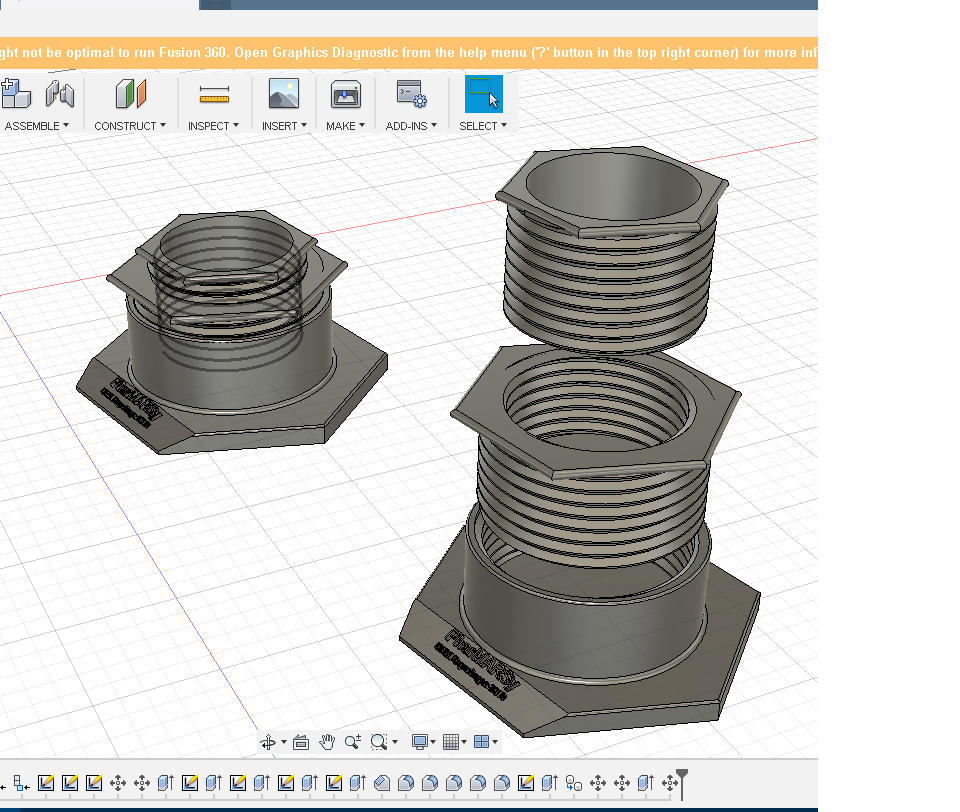 Figure 6: Another view of the Bacta_tank3 design, both assembled and disassembled.

As can be seen on the picture, including threads considerably simplified the use of "Bacta tank". The membrane would be placed between the upper and middle part, and protein wouldl be collected in the lowest chamber, while bacteria culture would be cultured in the utmost top. The threads allow for customisation of the volume of collection buffer in collection chamber, while also allowing for careful fixation of the membrane between upper two parts.

Figure 7: Rendering tool in Autodesk Fusion 360 program allows for different materials to be "tested" for visual appearance prior to actual production. Of course printing in glass or aluminium was beyond our capabilities.

The drawing of the chamber design was done in Fusion 360, a cloud-based CAD/CAM/CAE tool for collaborative product development, using an educational licence. The version used was 2.0.4126:

The drawing was then exported into Ultimaker Cura, an open access program for preparing the model for 3D printing.

Of course PLA polylactic acid is probably not the best material for growing bacteria in. At least some painting could be used after printing the model.

The device that was envisioned for astronauts to take on their space voyages would be of course far more advanced. It should be hermetically closed with double walls and multiple inlets/outlets allowing for manipulation of liquids and monitoring of parameters. It should also be enclosed in one more contamination containment chamber (the principle similar to what they currently use in nuclear power plants) which would protect the crew from the spillage of biohazard material in case of accidents. The fluidic system should allow for uninterrupted sampling both of the bacteria culture and of the protein solution. Bacteria could mutate due to exposure to mutagenic cosmic radiation so checking the genome of bacteria prior to start of protein production could be a good idea. On the other hand a samples from protein solution could be analysed either via capillary electrophoresis on a microfluidic device or some other method that would confirm the required purity and "quality" of the protein prior to use on the patient.

Finally, the chamber must withstand the disinfection between changing the bacterial strains when different proteins are needed. The most vulnerable part in this case would probably be the membrane, so a system that allows for changing of the membrane is a much better solution than the system with fixed one. This would also considerably extend the useability of the system, since a membrane that wears out could be easily changed.

A special note to the 3D printing enthusiasts. As the principal idea of 3D printing is accessibility to everyone (who has access to the 3D printer) and sharing, many designs can be found online. This is the case also with our design. If you are interested into our Bacta_tank3.0 and would like to print it on your own, please feel free to contact us and we will readily share our knowledge with you. We are also welcoming any suggestions from the more experienced printer-maestros, since we are very much aware that there is plenty of room for improvement. 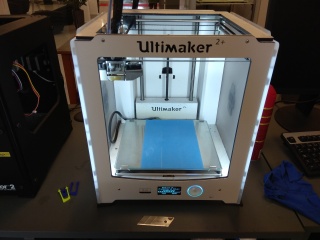 Figure 8: Ultimaker 2+ that was used for printing. The blue duct tape was used due to problems with sticking to the baseplate. 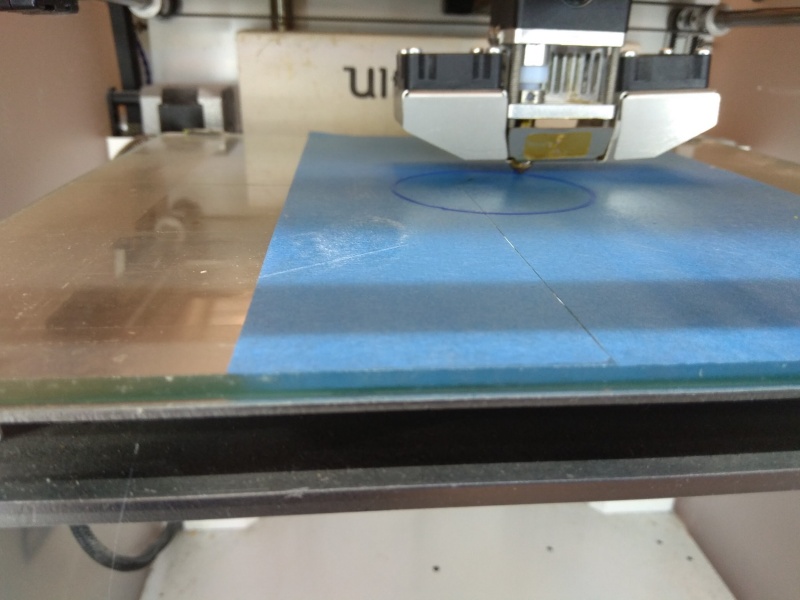 Figure 9: The initial layer is usually the hardest. A blue adhesive tape tends to solve the problem, especially if combined with the hair conditioner sprayed just before printing. 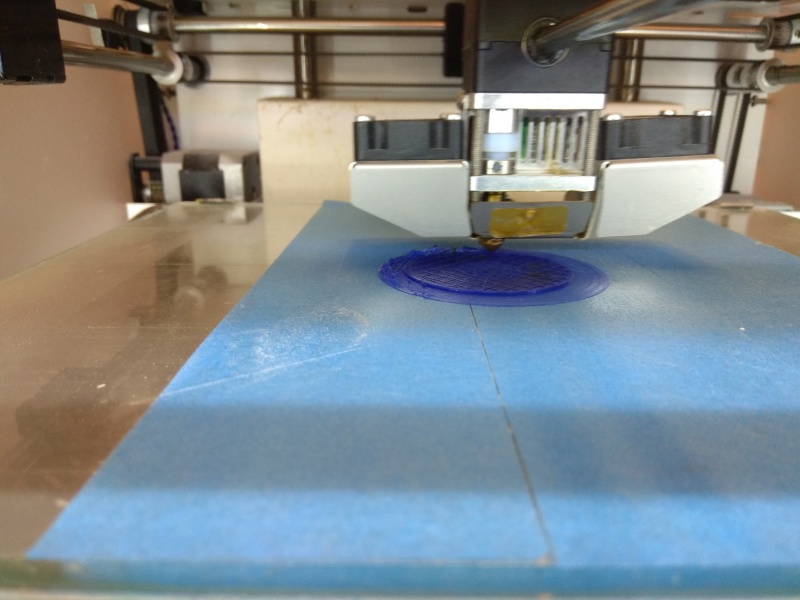 Figure 10: After first layer is printed, the worst is over and the rest of the body can be printed without supervision. 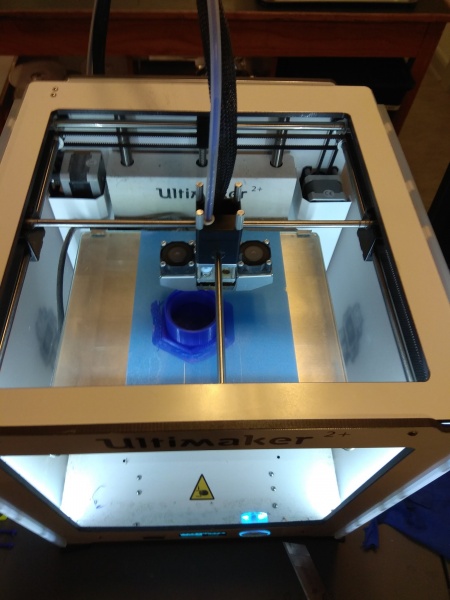 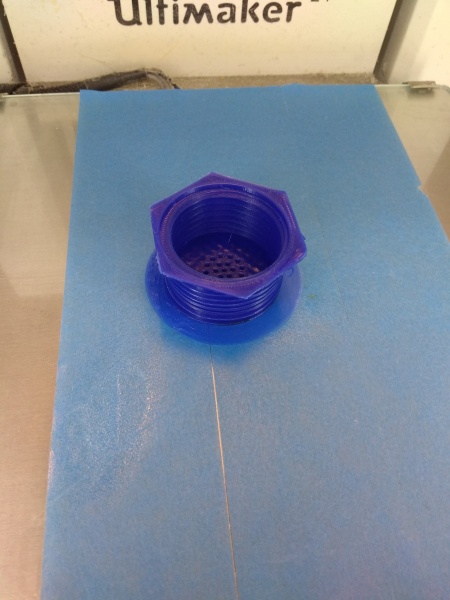 Figure 12: Right after finished printing, a careful removal of the object follows.

To support our predictions for the chamber size, we made simple approximations for how the cells could bind to the membrane. The outcome of different membrane sizes, cell secretion rates and the needed size for specific proteins can then be evaluated. Previously experiments with the secretion of a SipA protein has been conducted. Here a secretion rate of in the magnitude 60 molecules per cell per second was found.[1] The resulting production rate is then found. Here we assume a membrane size of 4 square centimeter, a E. coli attachment surface of 2 μm^2 and we know the molecular weight of SipA is 74 kDa $$N_{cells} = {0.0004m^2 \over 2*10^{-12}m^2}R_{bind}$$ $${dN_{produced} \over dt} = N_{cells}*SecRate$$ $$ProdRate = {dN_{produced} \over dt}*74kDa=1.47 {ng \over s}$$ Which is for 4 square centimeter. The production rate per square centimeter is then \(ProdRate = 0.368 {ng \over s}\) We can then calculate the membrane size needed to produce the amount of insulin needed to maintain the health of an astronaut suffering of Type 1 Diabetes Mellitus, which is 0.5 to 1 U per kg per day.[2] The molecule that is used as an example is Novorapid Insulin Aspart, with a weight of 100/3.5mg,[3] on a person of 70 kg $$ M_{Aspart,daily} = {70 {U \over day} \over M_{Aspart}}=2.45 {mg \over day}$$ $$ A_{membrane} = {M_{Aspart,daily} \over ProdRate_{daily}}= 76.92 cm^2 $$ Contour plotting the production rate as a function of secretion rate and binding factor, \(R_{bind}\) and finding the coefficients needed, allows us to evaluate the design in accordance to the needed production of Aspartan. Below is the plots of 3 different membrane sizes,

With this we are able to conclude that the size of the physical model to produce enough protein for one person is achievable! In the future, focus on modeling secretion rates across membranes would be an ideal way to evaluate experiments with injectisome binding to membranes.