This year, our team is committed to produce useful prodrug 3-succinoylpyridine using tobacco waste by using a more environmentally friendly approach. We previously planned to produce the prodrug with pure nicotine. China has the largest group of smokers in the world, with its tobacco production and sales ranking first in the world. With a nicotine high content in tobacco, we are thinking about trying to take advantage of tobacco waste. This is related to tobacco industry and thus it is why we planed to go to the factories to find out the actual situations. The most amazing work of Human Practices this year is that we have truly been to the tobacco factories in three places, researching our project, and make a great success eventually.

We are harvesting so much surprisingly in three cigarette factorys! Therefore, we have a totally new understanding of the subject! The tobacco waste used in our project is specifically referred to as tobacco dusts. The following is a detailed explanation of the unique position of tobacco dusts in general tobacco waste, and currentl treatment system of tobacco waste industria. In the end, we shifted the focus from dealing with pollution problems to deal with tobacco dusts only.We decided to give up using pure nicotine instead of tobacco waste and redesign our project to develop a production chain downstream of the tobacco industry to tobacco waste, which is not being made good use of, to produce the prodrug, by using a more environmentally friendly approach.

1. Professional terms relating to tobacco waste needed to be distinguished.

To fully understand our work, it’s necessary to distinguish the following concepts correctly.

①Tabacoo Scraps:Axillary buds and tobacco stems, etc., and tobacco waste produced in the processing of tobacco in the cigarette factory.

②Tobacco crumb, cut tobacoo and tobacco stems: produced in the process of tobacco drying, re-baking, and being rolled up, etc., three kinds of recyclable tobacco waste, can be uesd to synthetize papermaking tobacco slice, which would be reused in tobacco production. 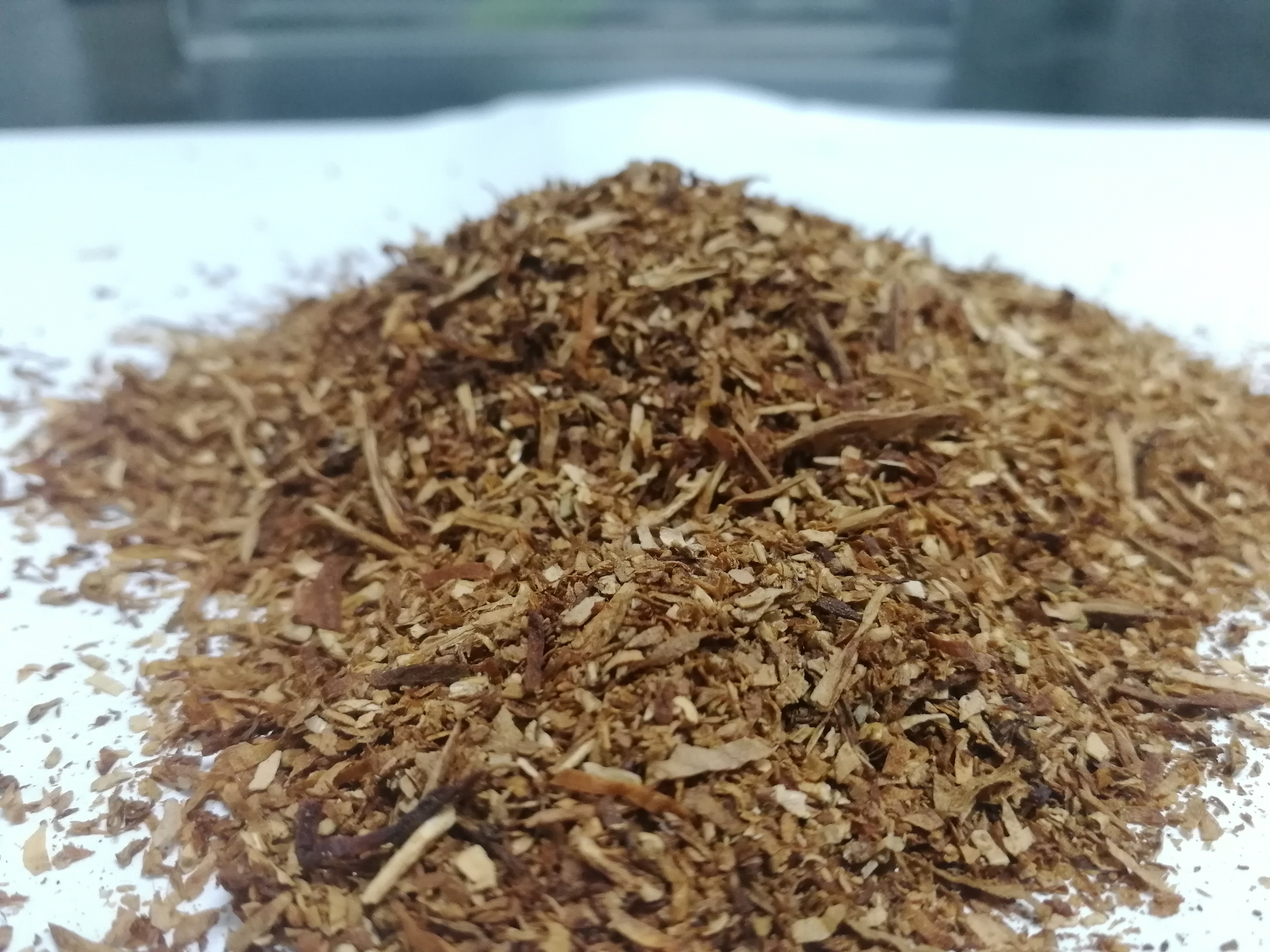 ③Tobacco dusts: a kind of unrecyclable tobacco waste, which is eventually made into a tobacco bar in the factory. 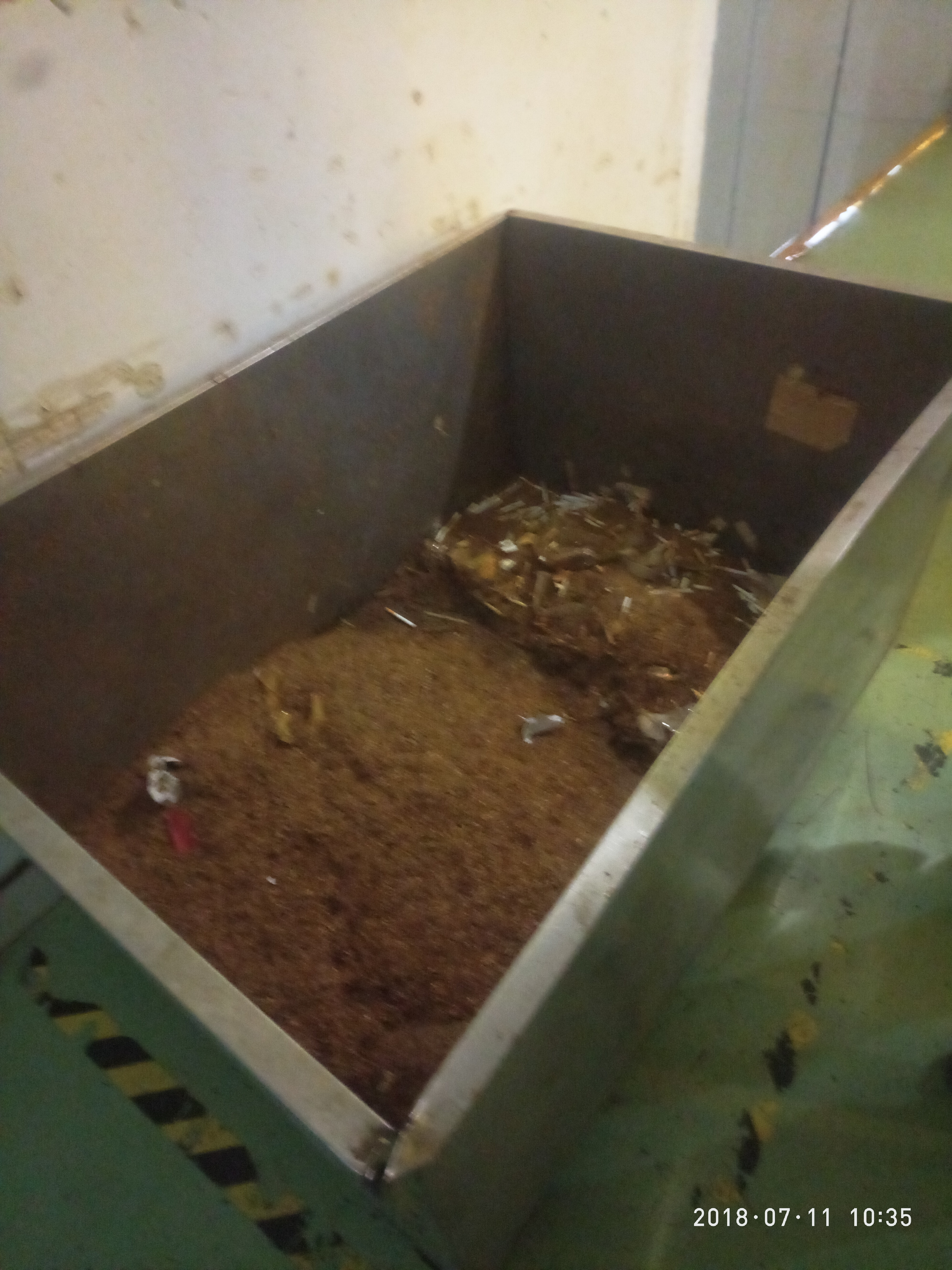 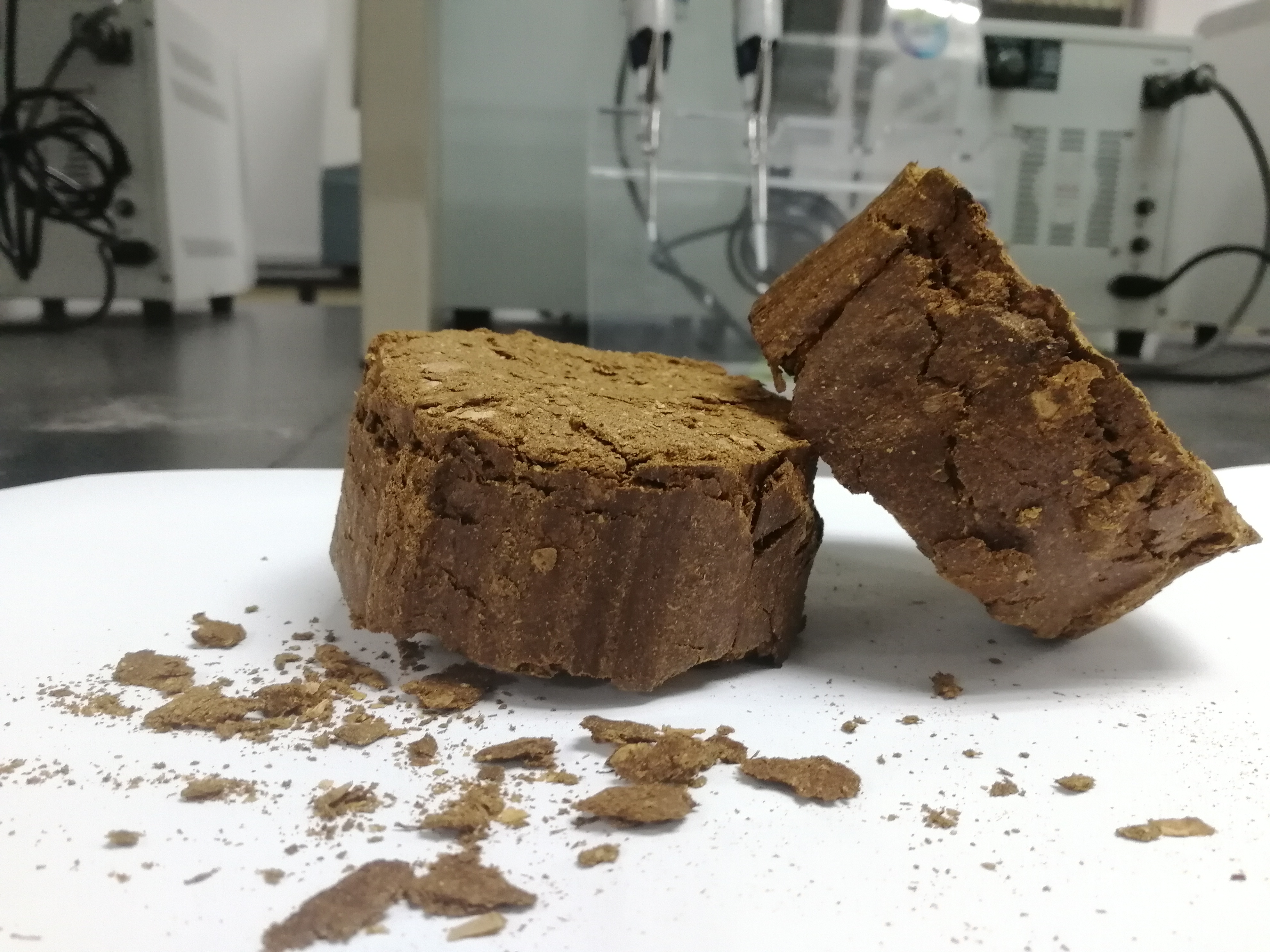 The picture shows the primary process of tobacco production, which can be divided into rough and fine methods. In rough processing, including tobacco cutting, leaf selection, cigarette wrapping, etc. mainly, machines don’t discharge too much tobacco dusts into the air, but large volume of recyclable tobacco waste, like tobacco crumb and tobacco stems, is produced. These processing processes are exposed to air . However, some processes, such as drying and dehydration, will not release the tobacco dusts because the related devices are fully enveloped and connected by tubes to avoid possible leakage. With the tube system, the tobacco dusts are easily collected together, then concentrated and burnt to dusts. Although the tobacco dusts are not recyclable, there are some valuable raw materials in tobacco dusts. The contents of dusts are same to original tobacco leaves, which means that amount of nicotine can be extracted from the tobacco dusts for further utilization. Besides, compared with leaves, it is easier to obtain nicotine from ashes in powder by simply immersing in the medium so that E.coli can absorb these nicotine to synthesize medicine precursors. In Hefei Cigarette Factory, we learned about the quality of tobacco dusts produced is about 20 tons per month, similar to the other two factories. This information reflects we can get a abundant nicotine source for our project. 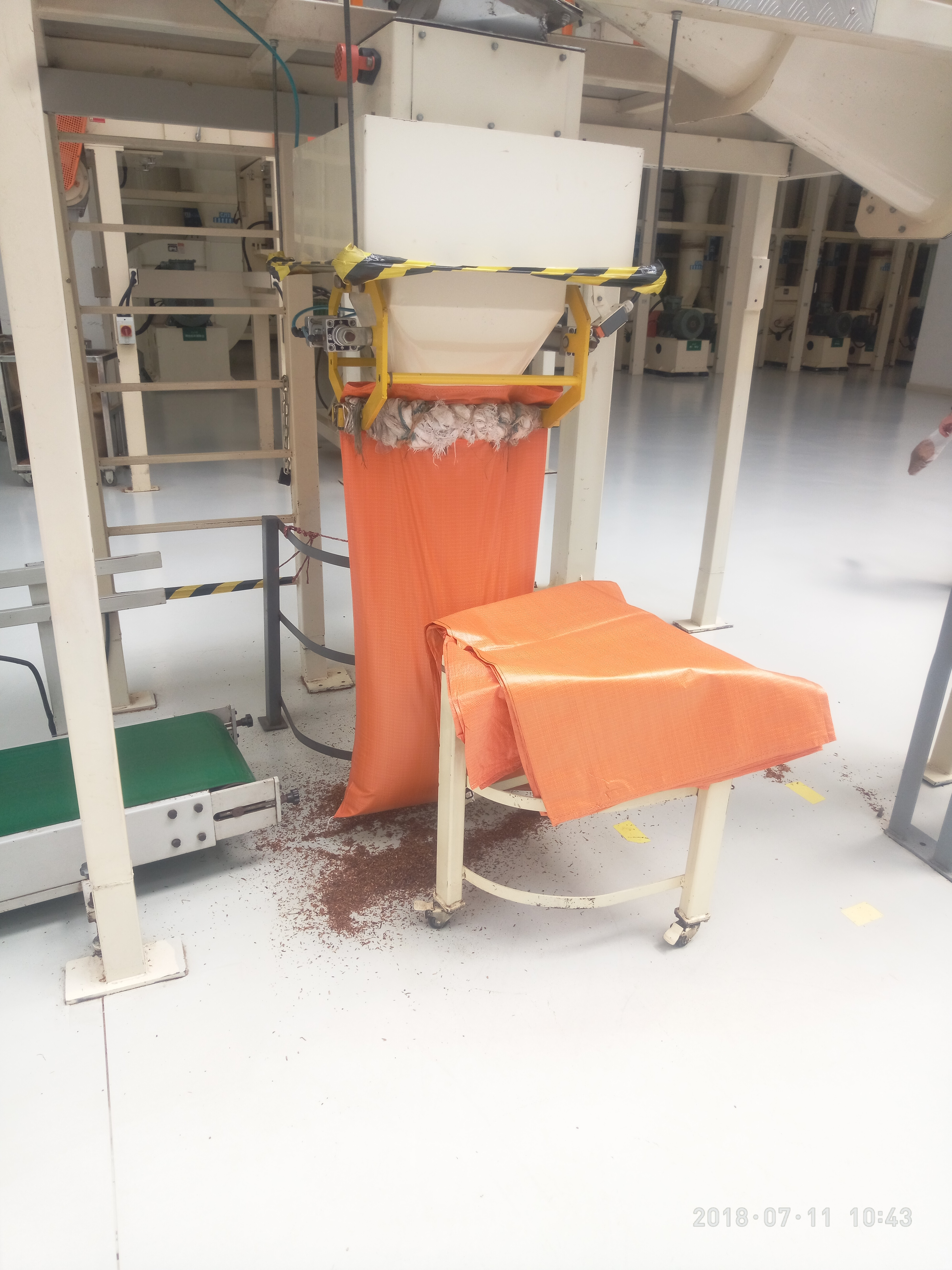 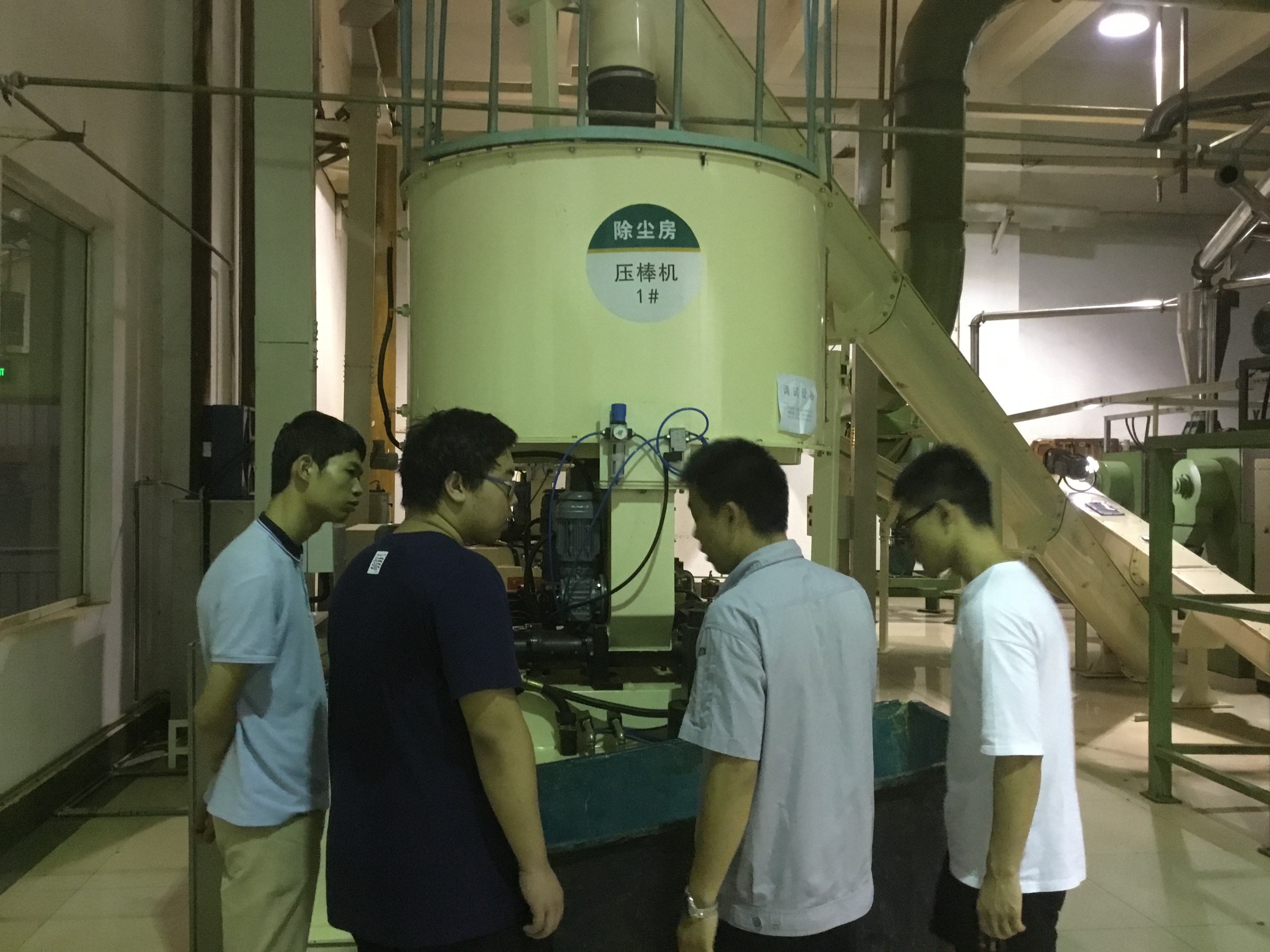 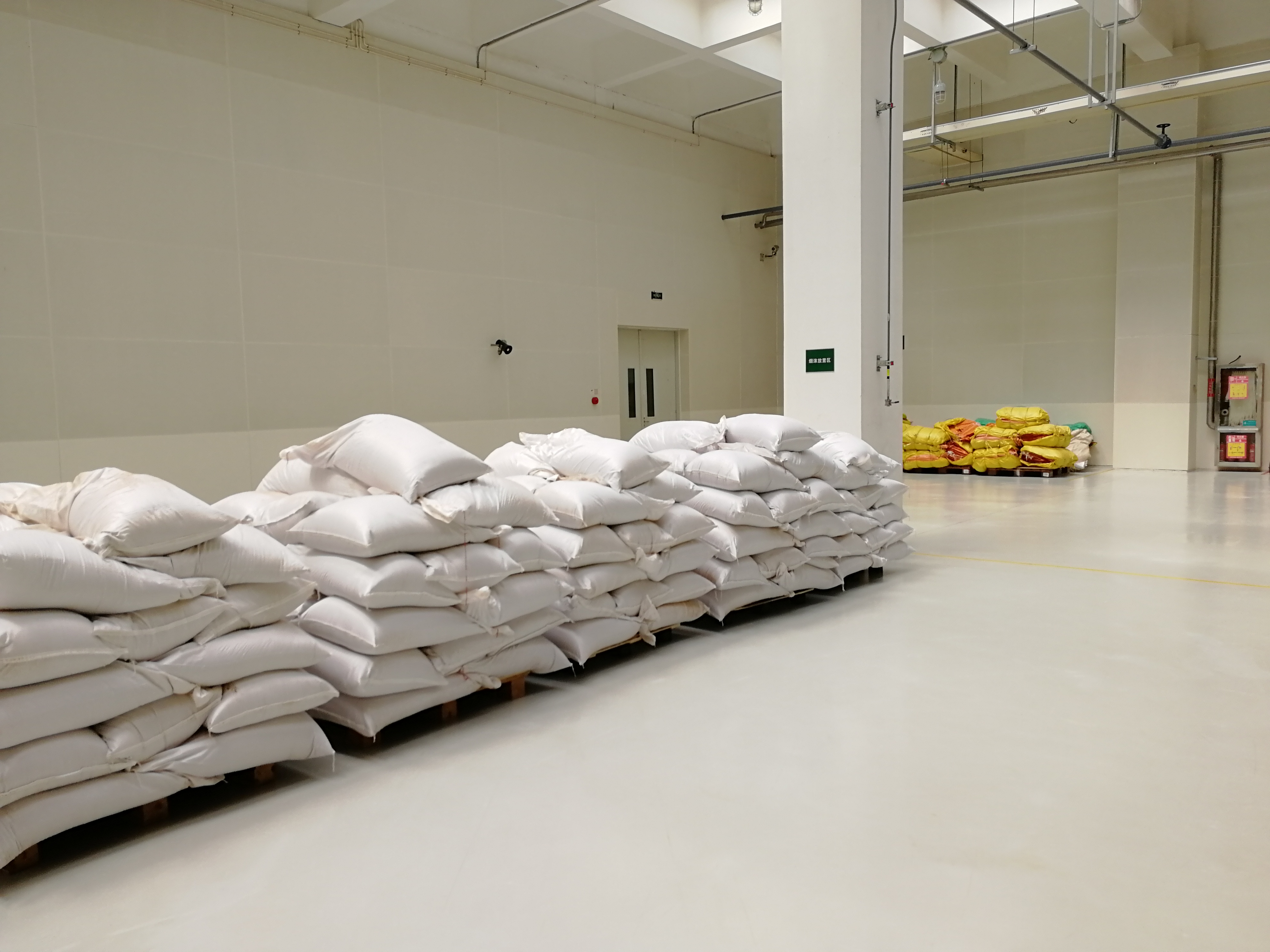 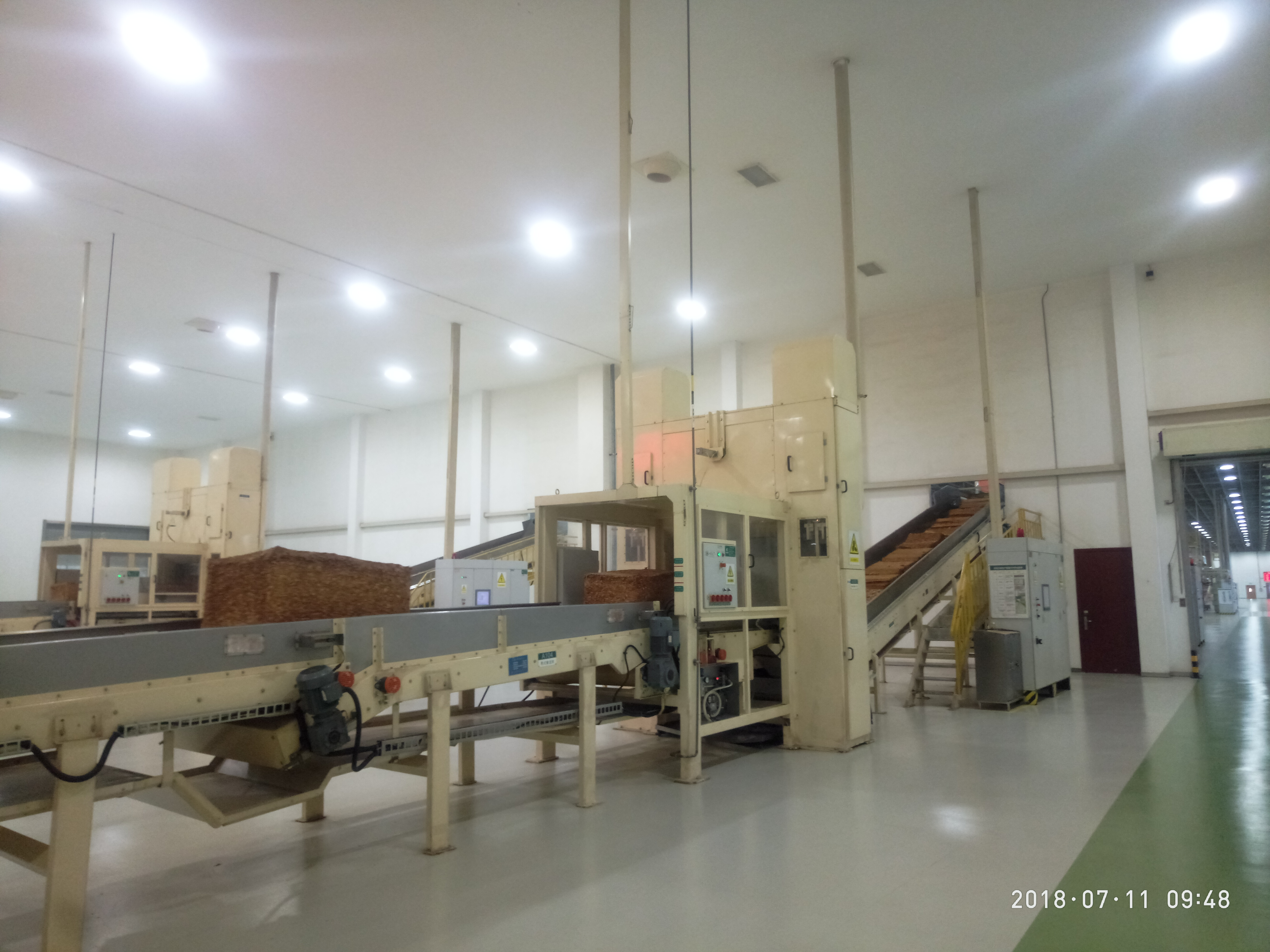 In addition, we talked with tobacco factory production experts and tobacco waste disposal experts, reviewing the detailed process of the visit. Based on these sorts, we Re-examine our project and made corresponding adjustments. We understood that the tobacco industry already had some mature methods for recycling some tobacco waste. They will recycle most of the recyclable tobacco waste such as tobacco crumb, cut tobacoo and tobacco stems, which are reused as a part of cigarette raw materials. But they only reuse recyclable tobacco waste, collected tobacco dusts just burnt. 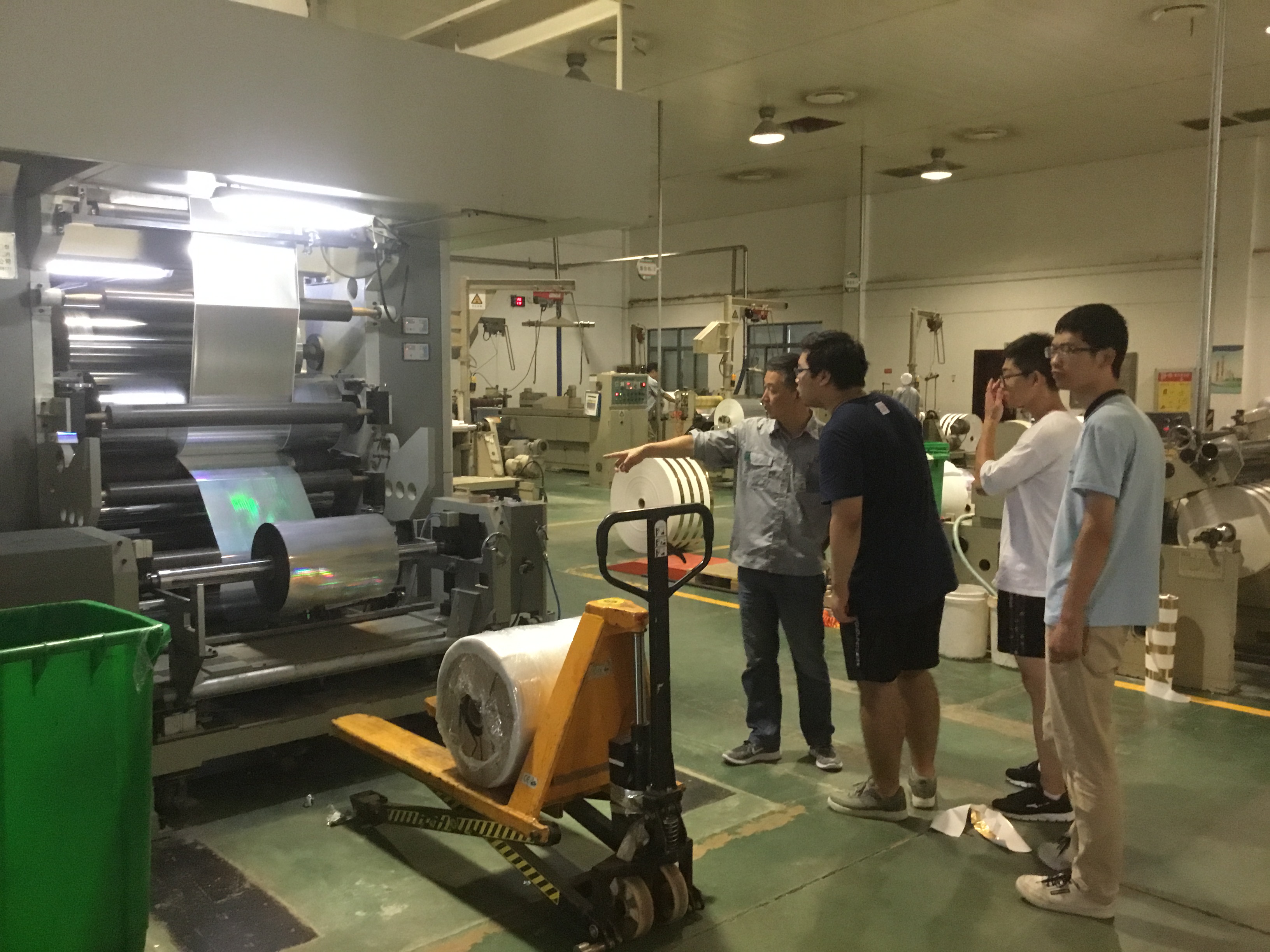 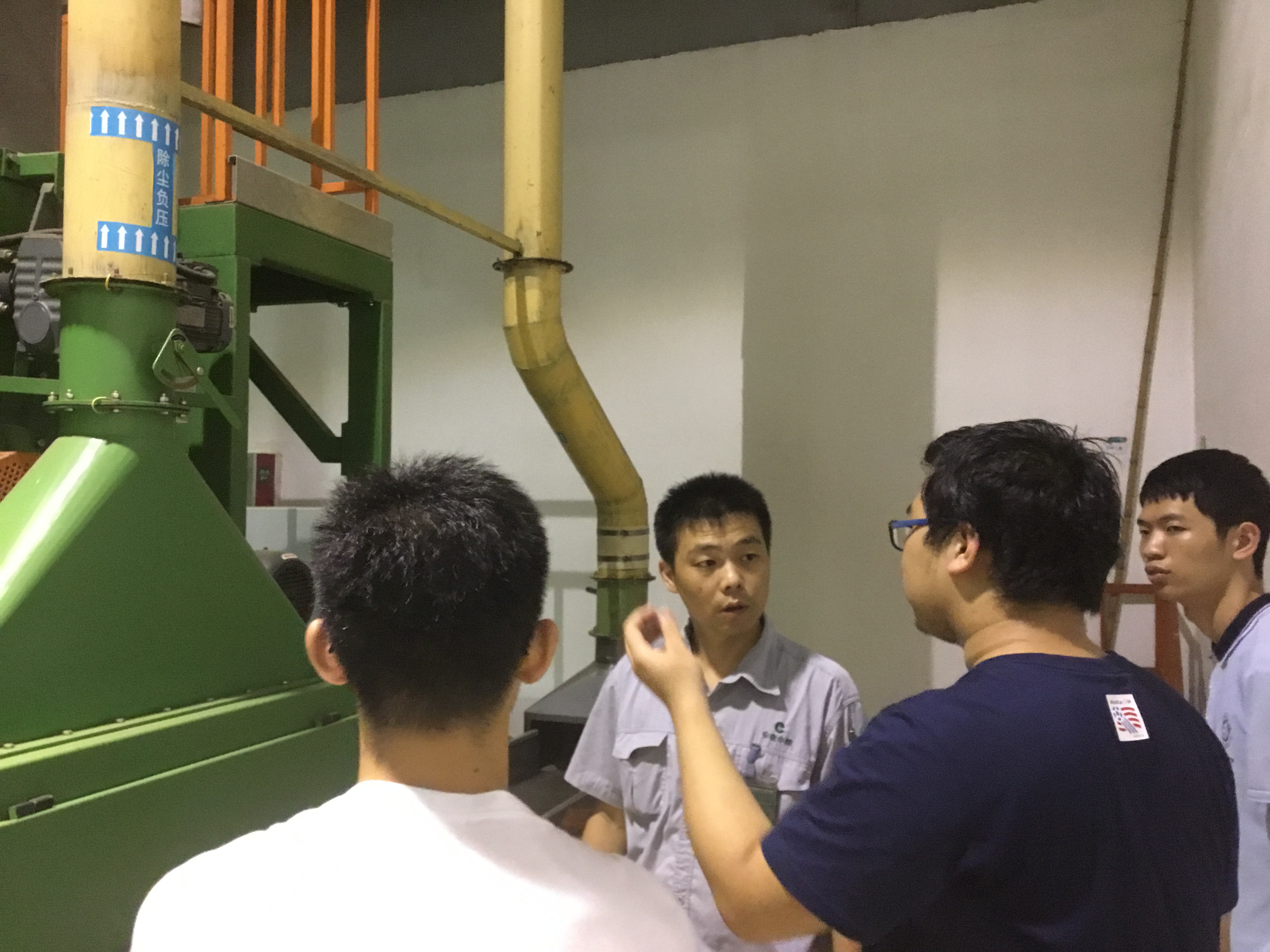 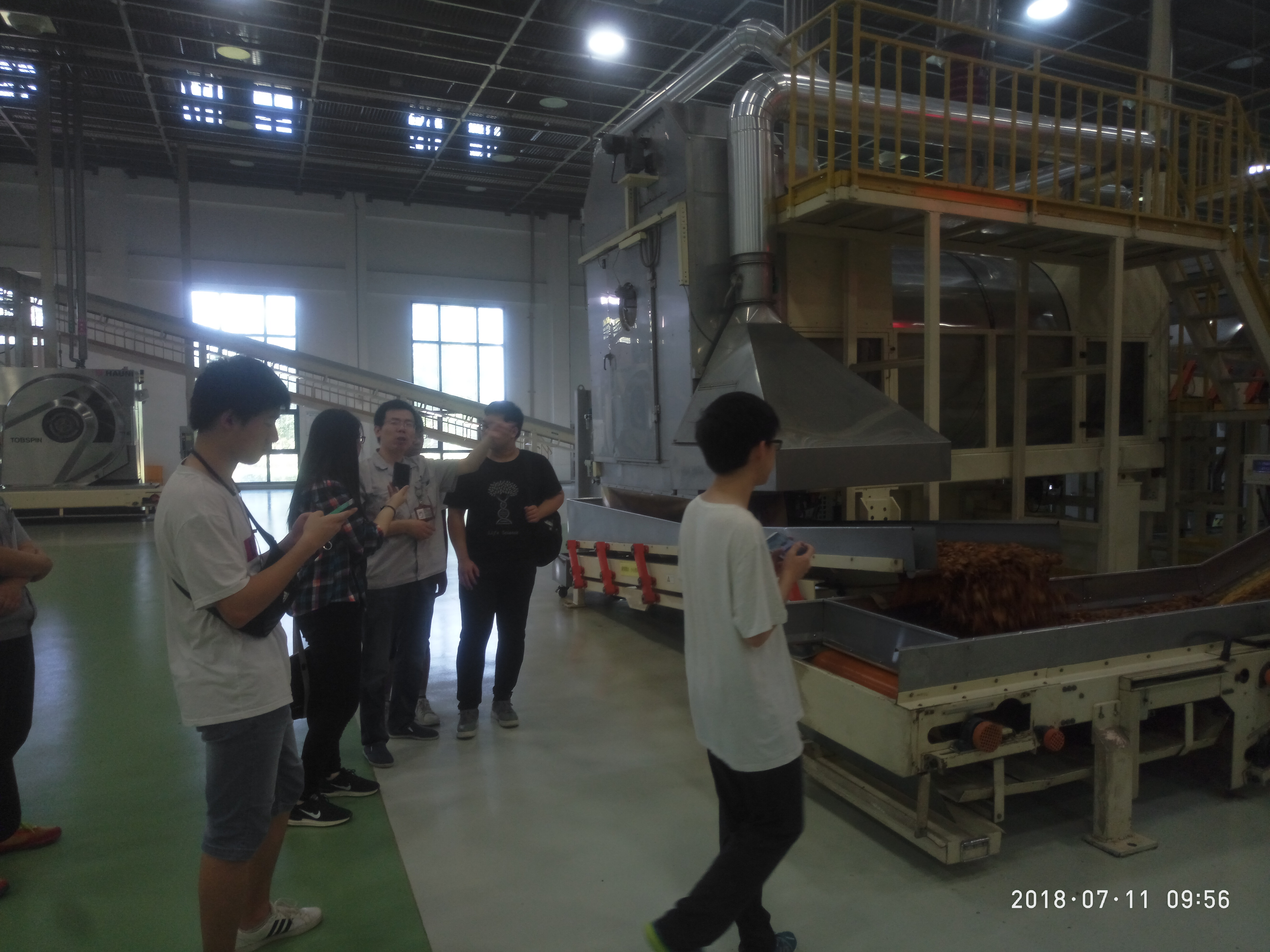 4.Develop a downstream production line for the tobacco industry.

After factory investigation and talks with experts, we learned more about tobacco waste and industrial tobacco waste treatment systems. We firstly find out that we can use nicotine in tobacco waste to produce drugs, instead of using prue nicotine. Secondly, we know that the tobacco industry already had some mature methods for recycling some tobacco waste, except tobacco dusts, which are just treated by burning . With the determinnation to make good use of tobacco dusts, with huge potential use value and high levels of out put, our project is trying to develop a downstream production line for the tobacco industry to produce drugs. 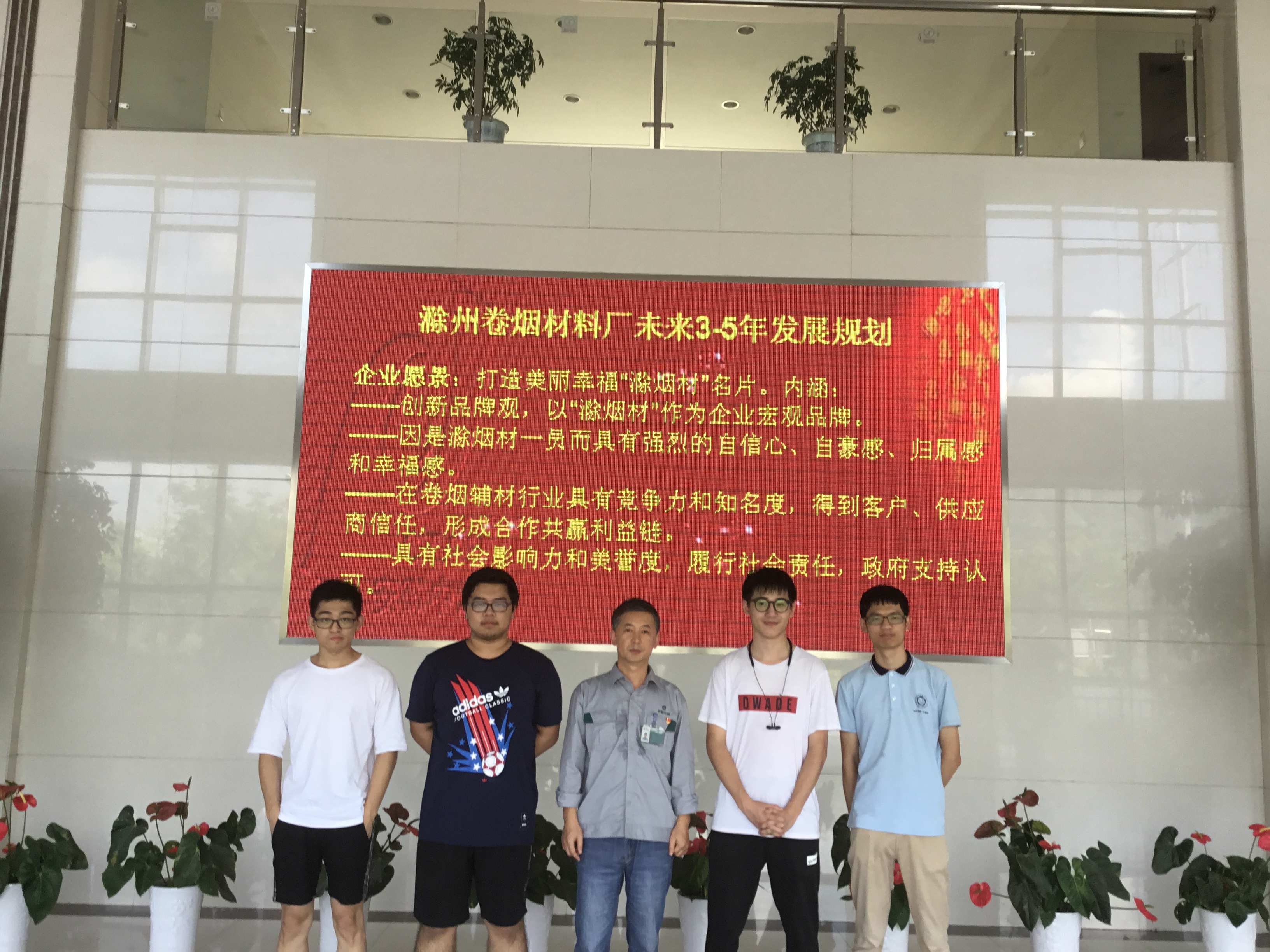 This year we are devoted to turning tobacco waste into drugs. Because China has the largest group of smokers and the largest industrial scale in the world, tobacco-related issues have always been a hot topic in society. Naturally, we want to collect the community’s views about tobacco. Meanwhile,For the purpose of propagating iGEM synthetic biology, we designed a questionnaire. We have collected 337 samples at all, with absolutely reliable data to analysis and come to conclusions eventually. The final result is very interesting and quite helpful for our topic. 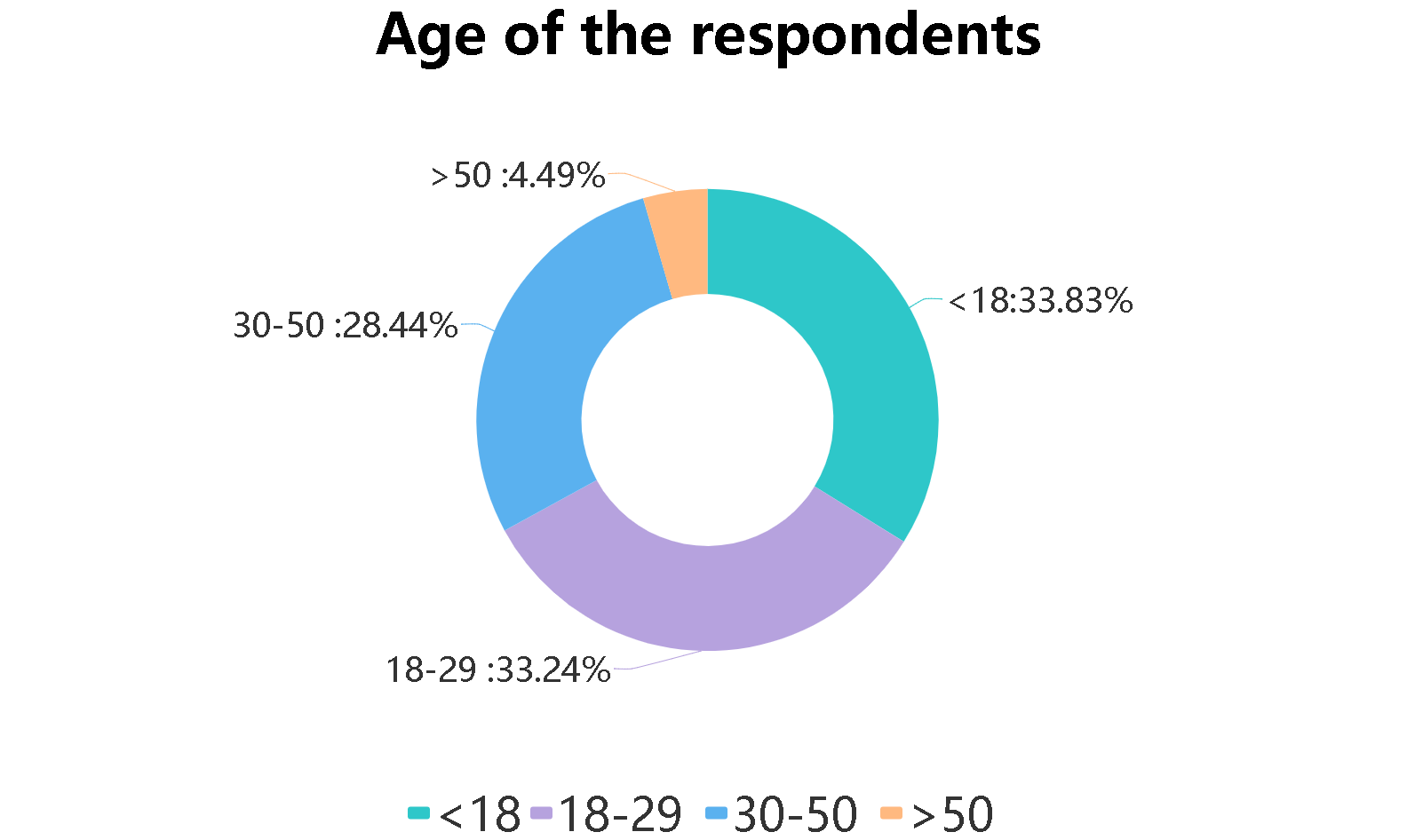 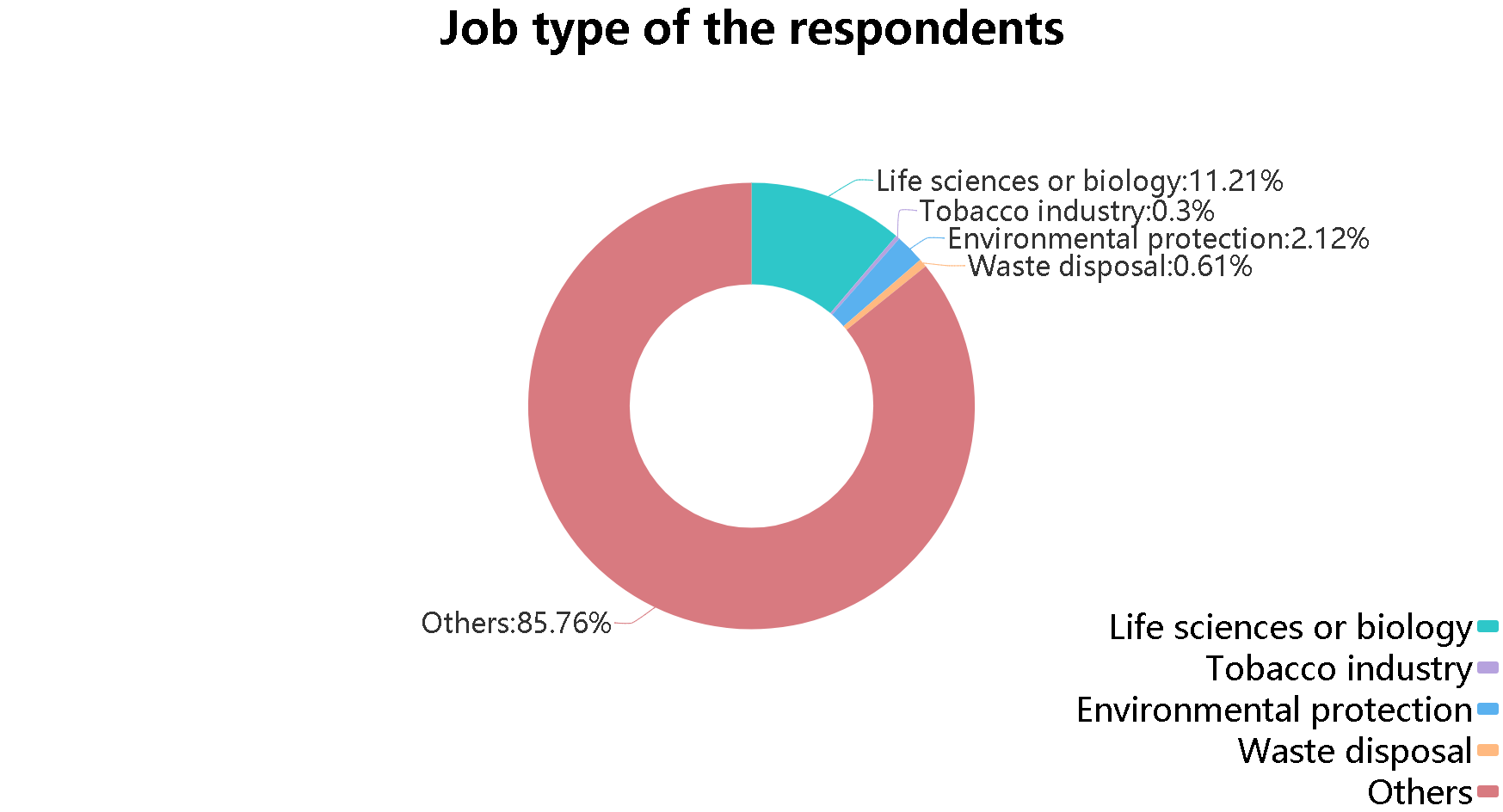 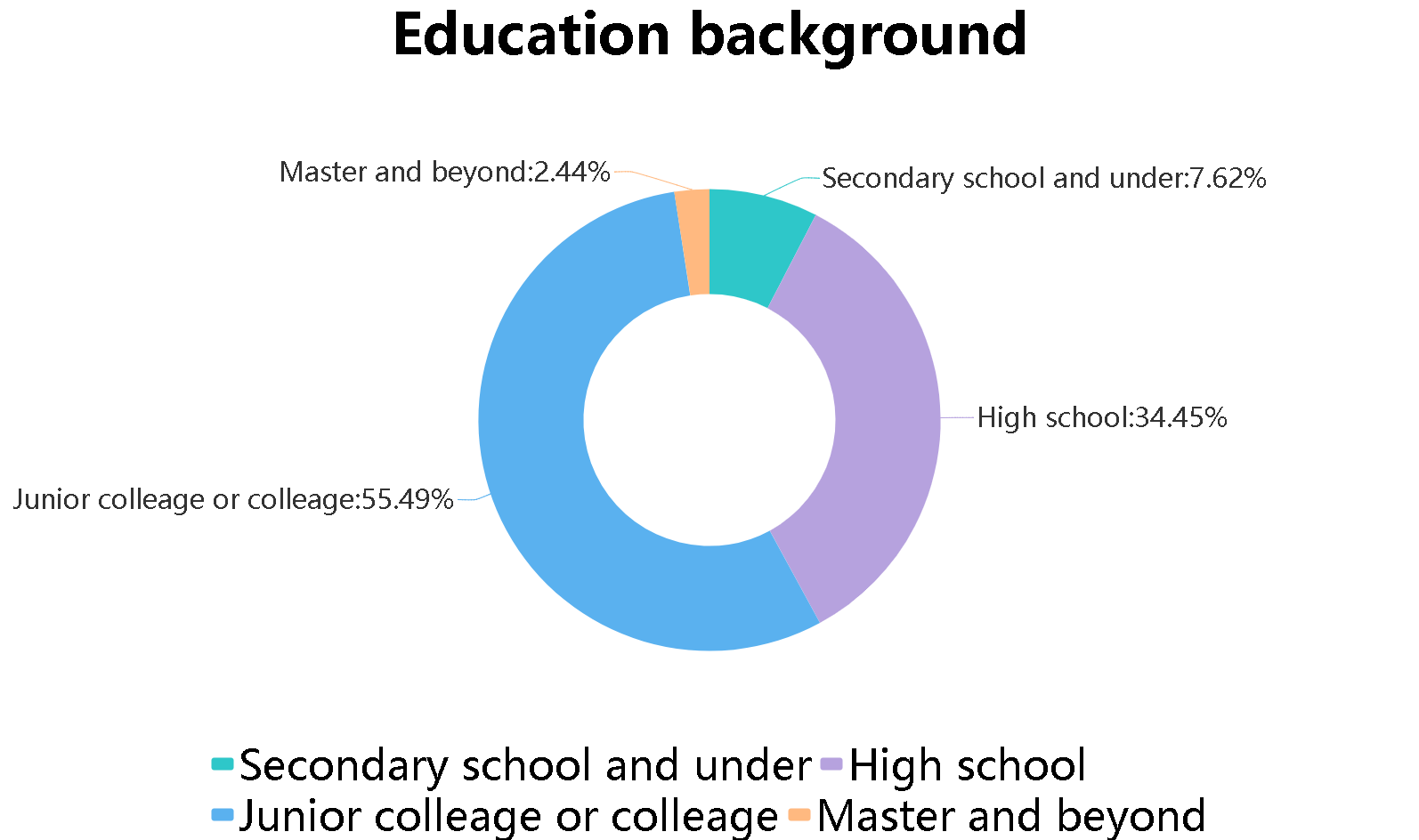 Because of the huge influence of the tobacco industry in China, we believe that everyone can speak for this topic! Our survey also truly covers people from different occupations, ages and academic backgrounds. The final result shows that the proportion of people of all ages and social backgrounds is normal with no excessive imbalance. Therefore, the data is absolutely valid. For tobacco industry related issues, adults over the age of 30 tend to be more discreet, but young people's ideas also represent emerging ideas, which will produce very interesting results.

2. The Knowledge Of Nicotine 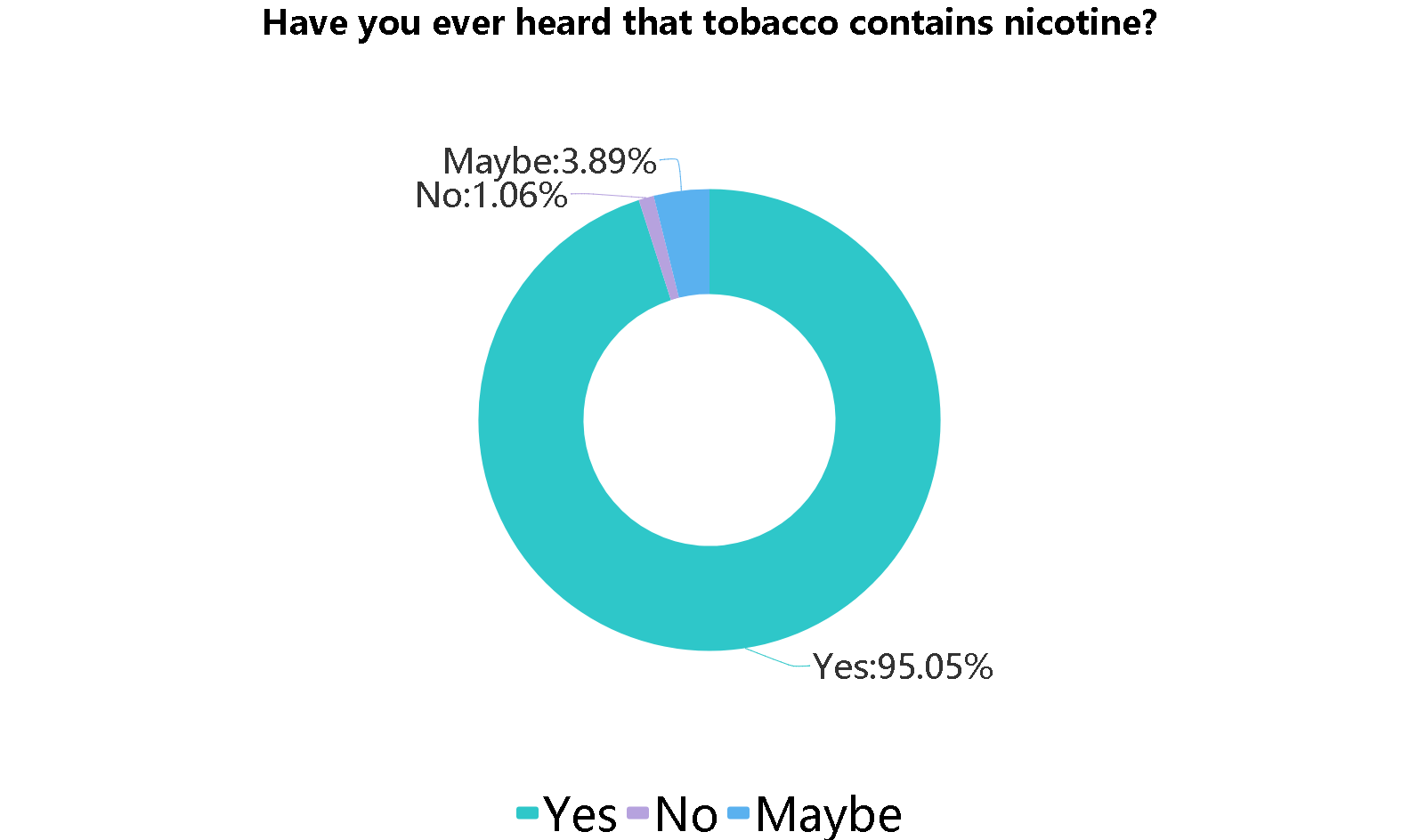 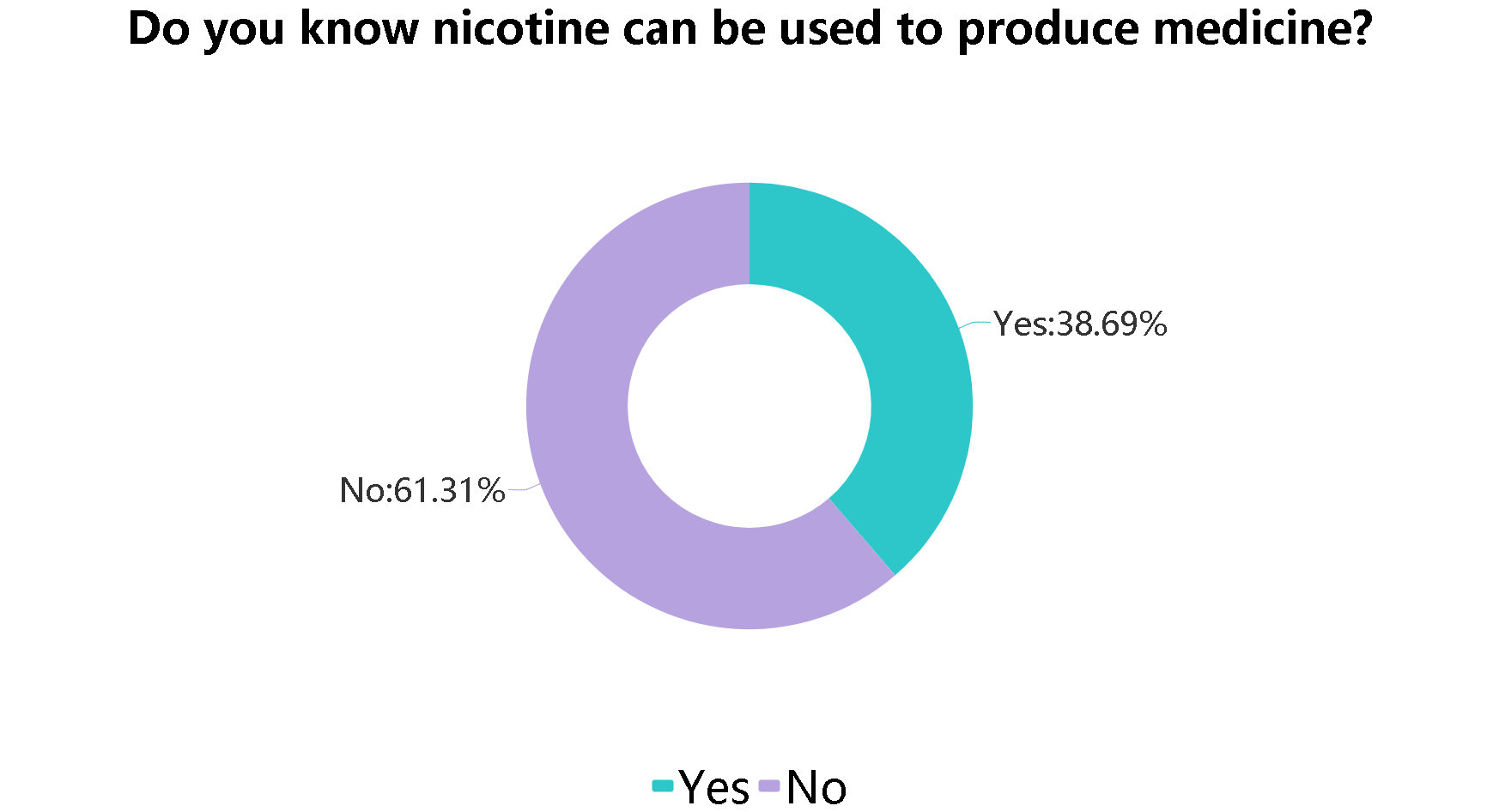 This data makes us feel very surprised, there are happiness and regrets. First of all, almost everyone knows the existence of nicotine in tobacco. More than 58% of adults know that they can use nicotine to produce drugs. This is a great encouragement for us. Our subject can be widely accepted andunderstood by society. Unfortunately, there are very few people who know the potential of nicotine drugs among minors, but that is exactly why we are constantly promoting.

3. Views on cigarette and tobacco industry 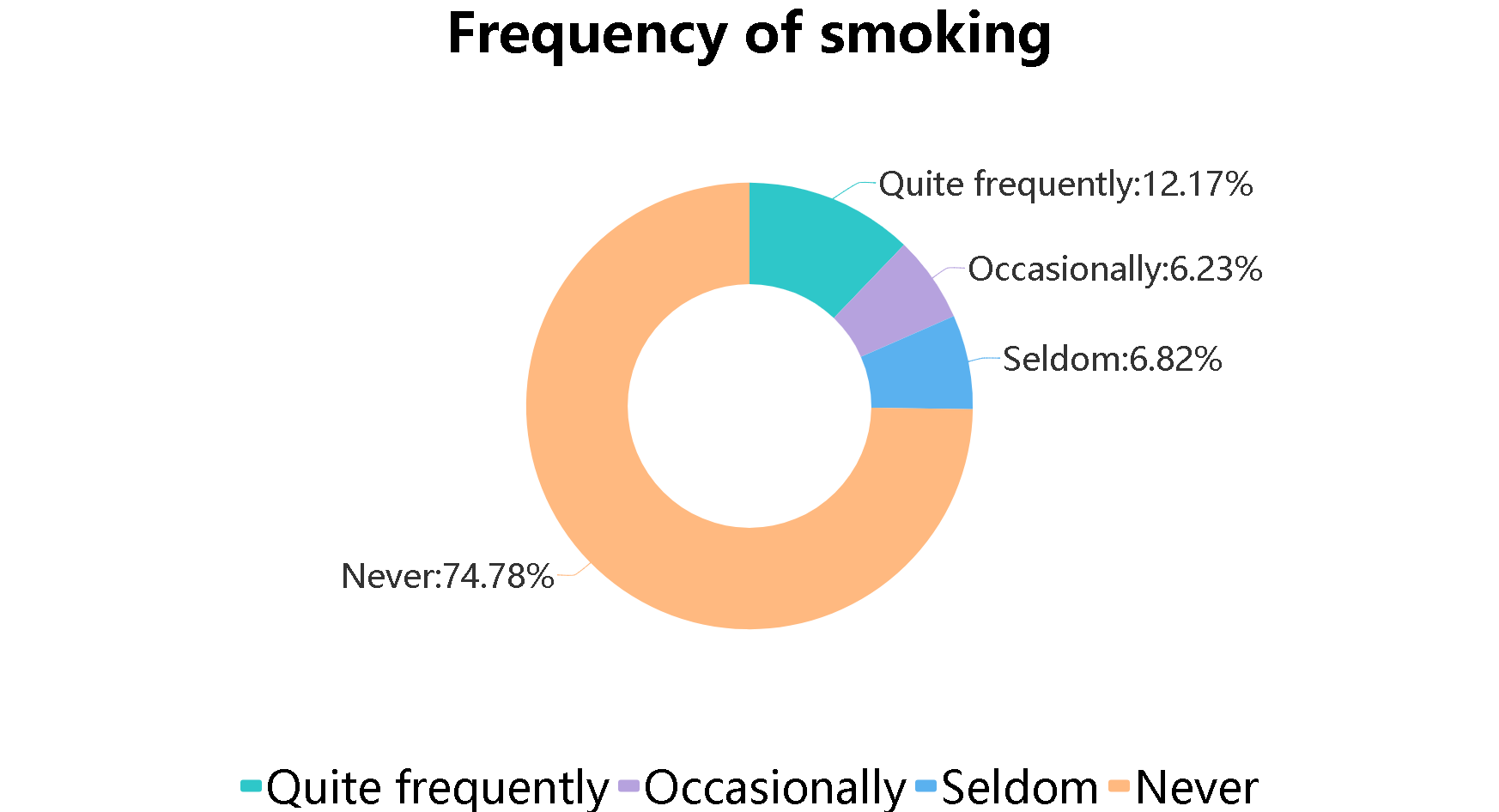 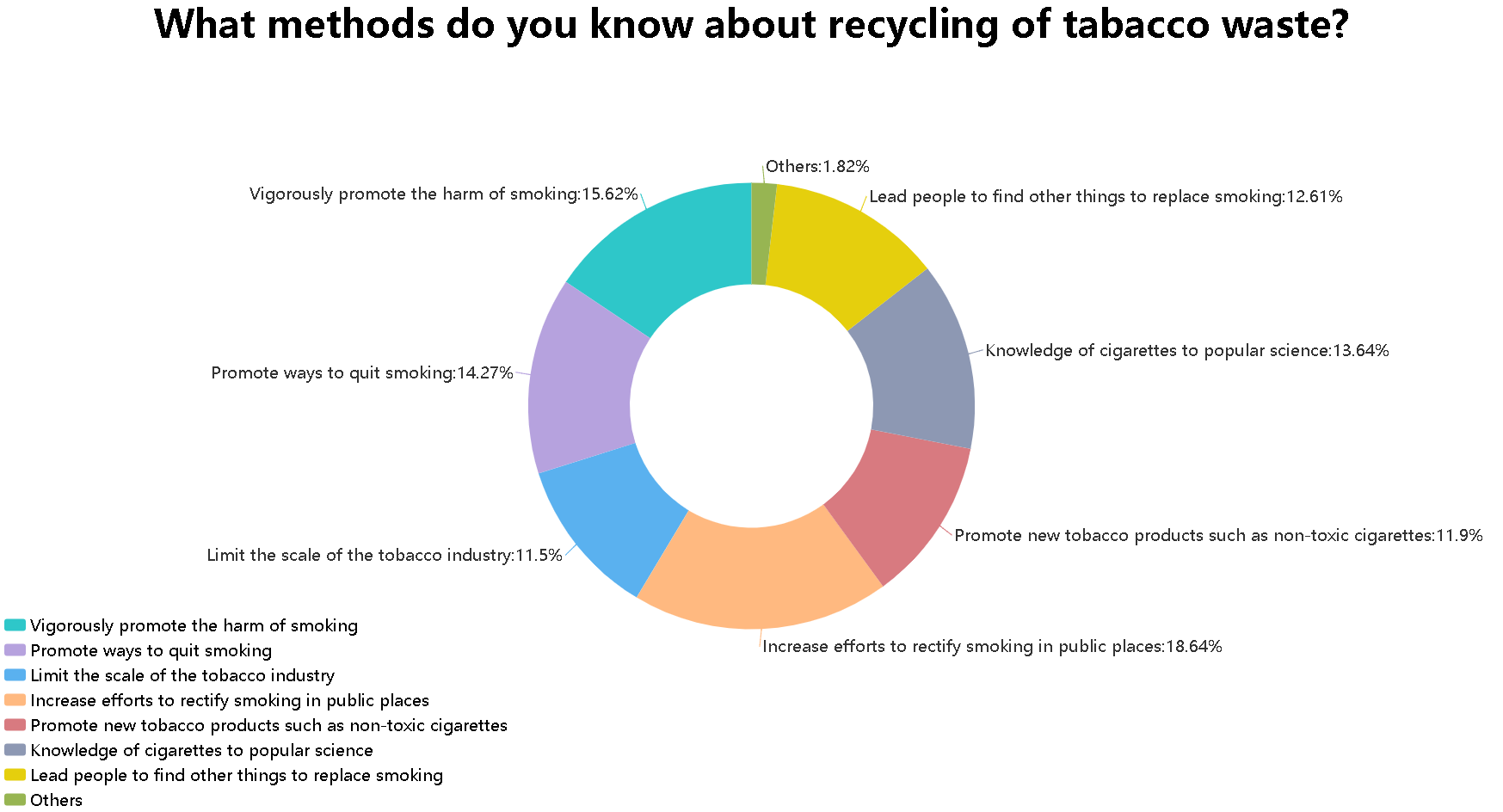 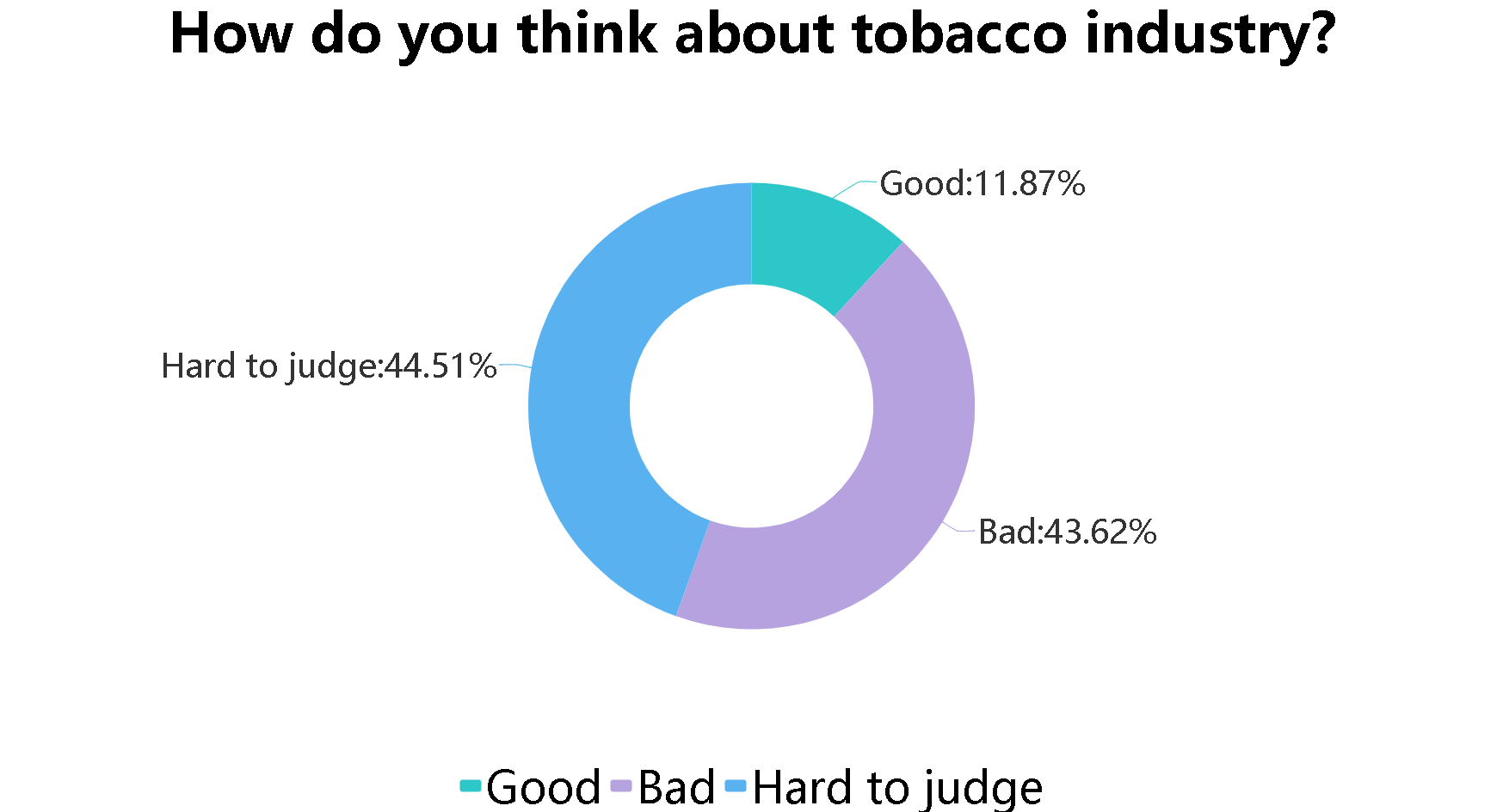 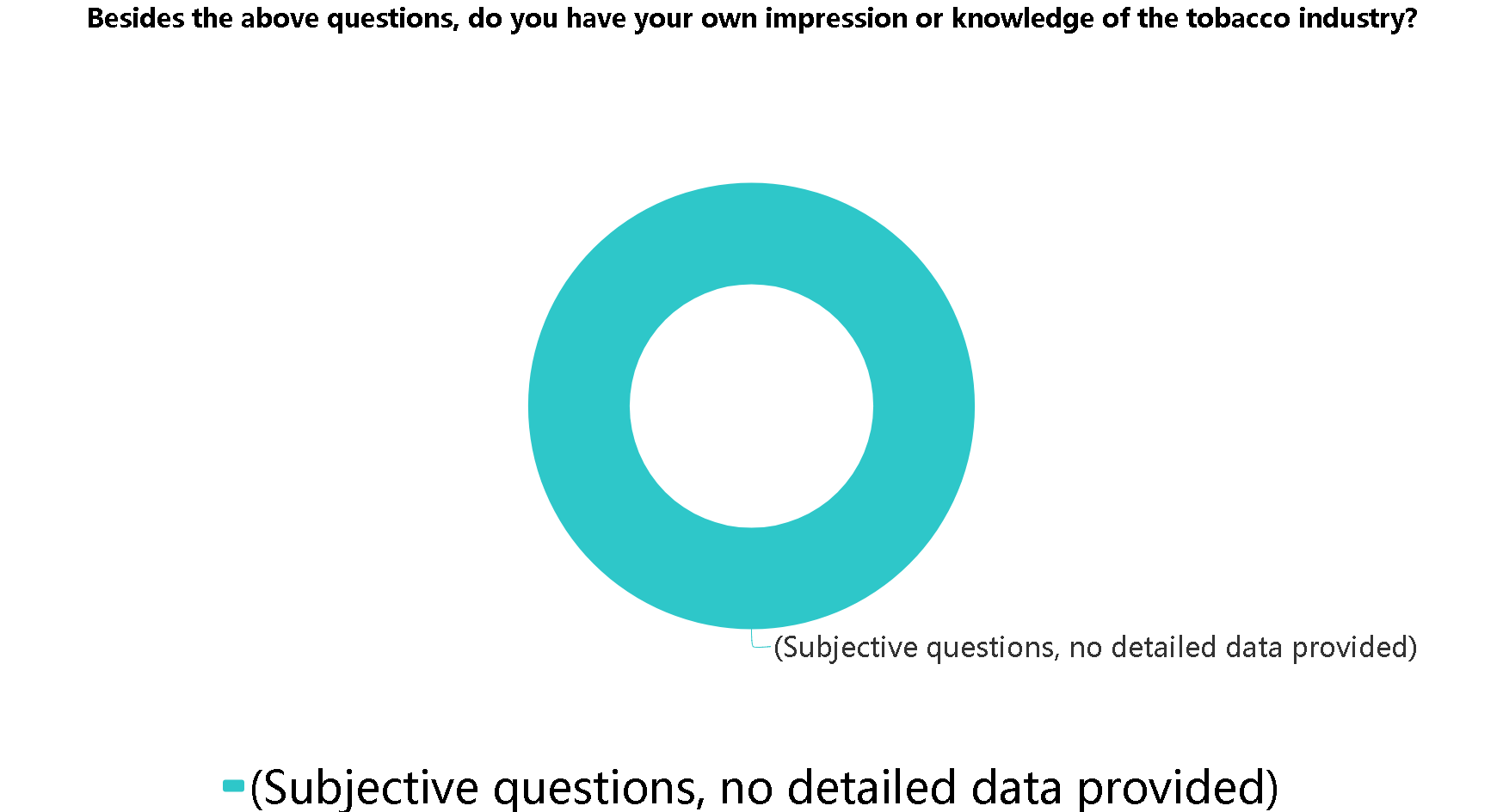 4. The Knowledge of Tobacco Waste 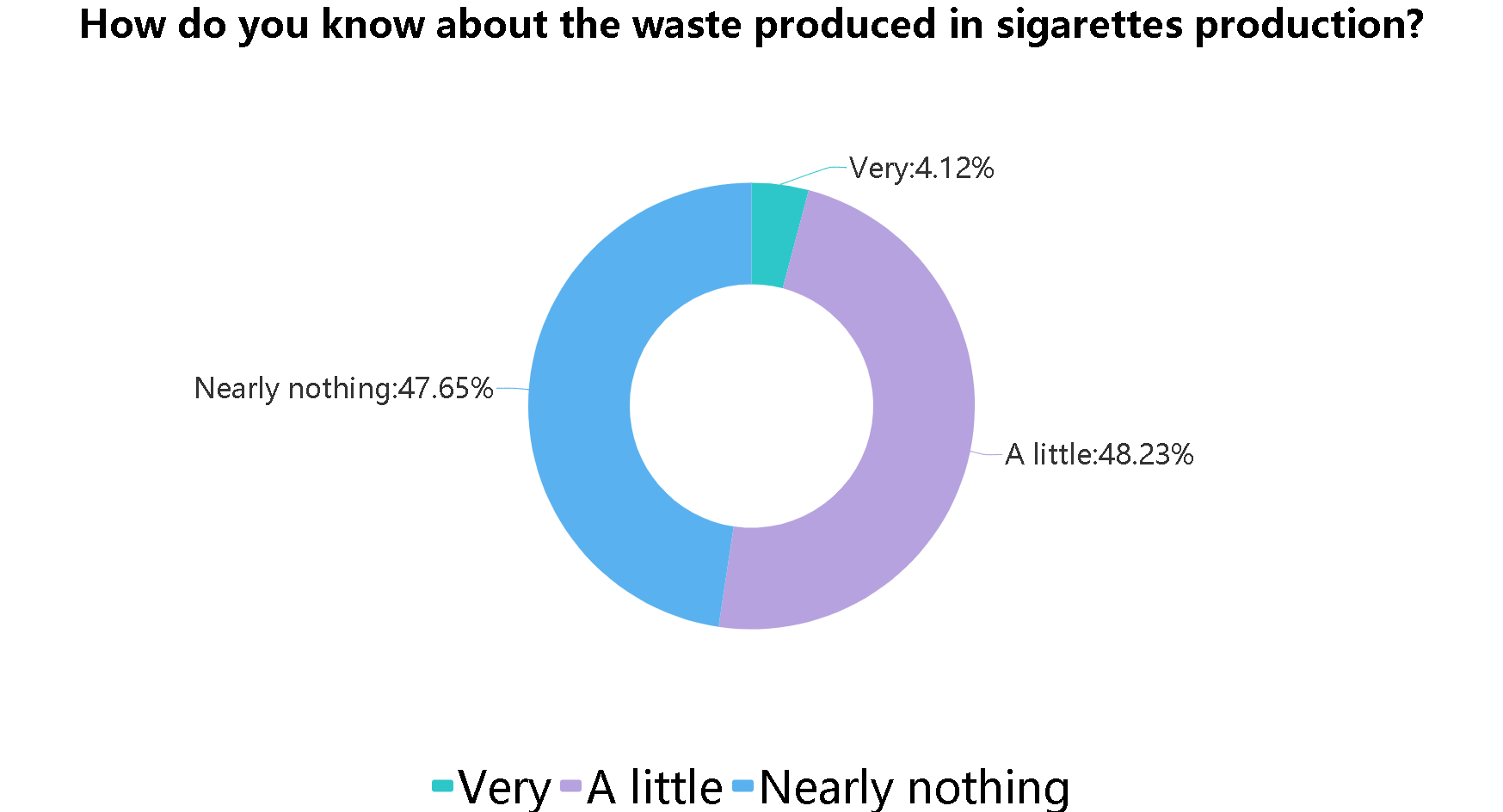 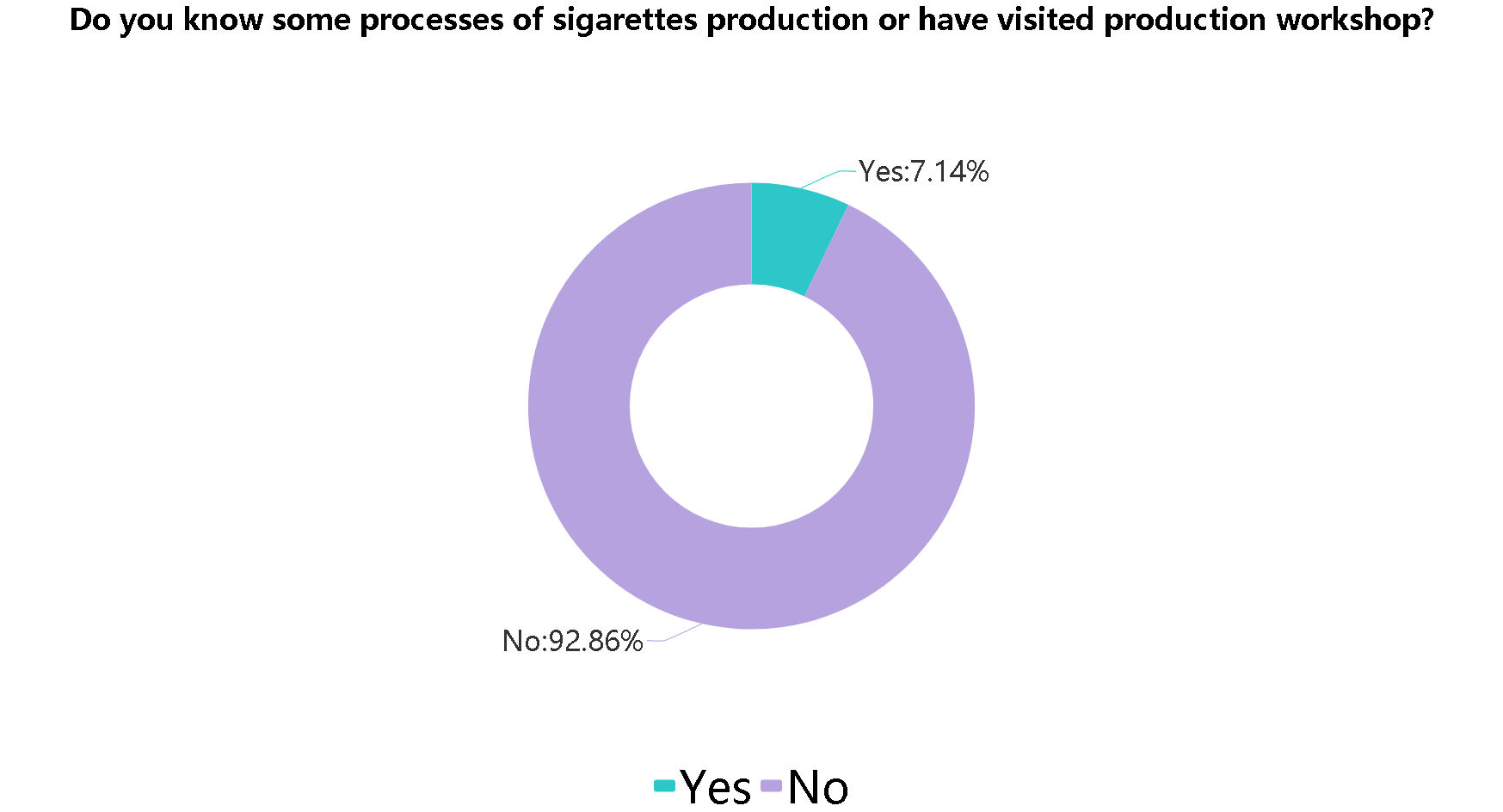 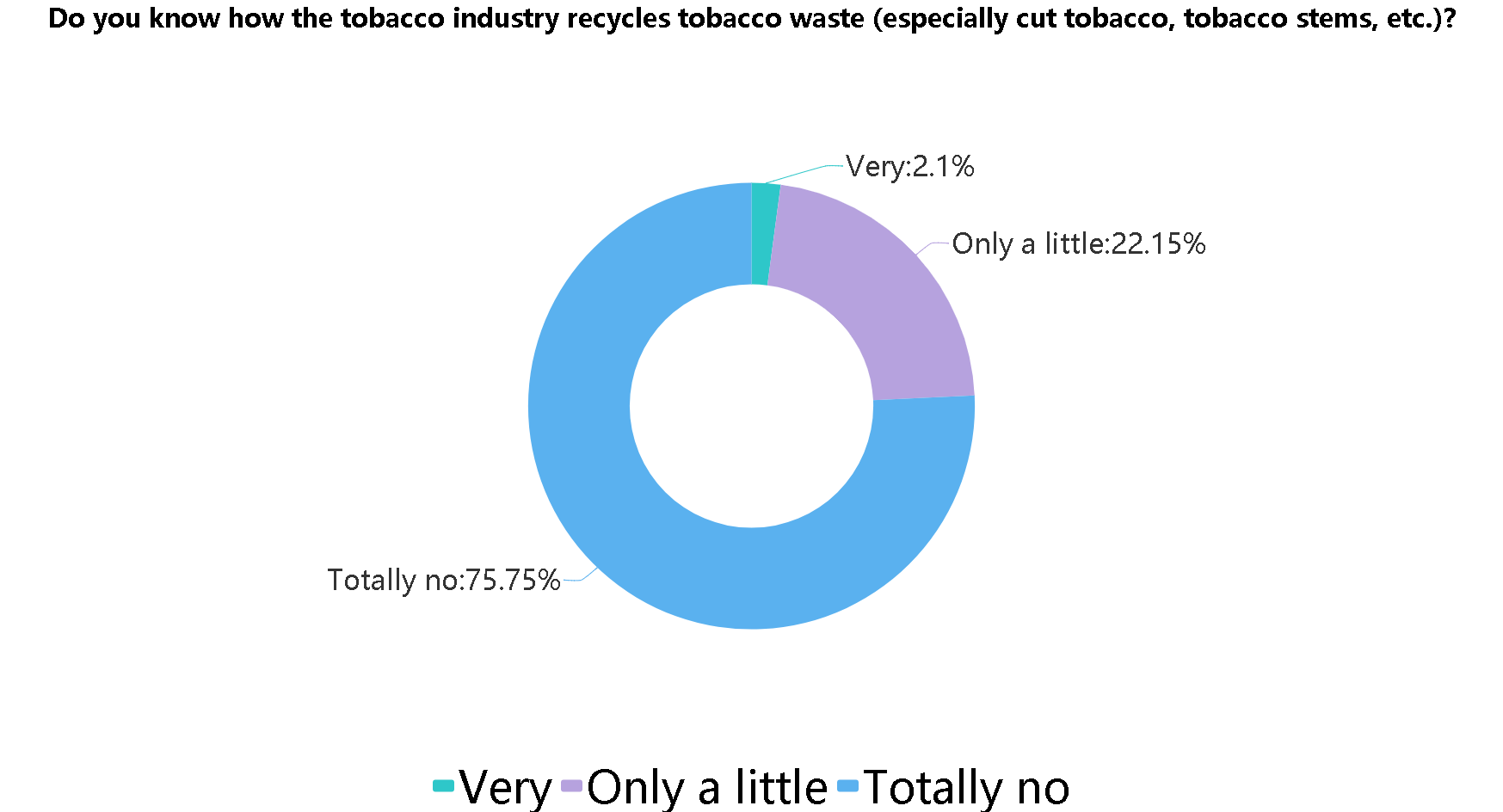 This part of the data is not unexpected. The public does not know much about the waste of the tobacco industry. Fortunately, our other HP work will show this knowledge in detail. I believe those who have already done the questionnaire and are concerned about our subject can definitely have a deeper understanding of tobacoo waste and tobacoo industry.

5. The propagation of iGEM 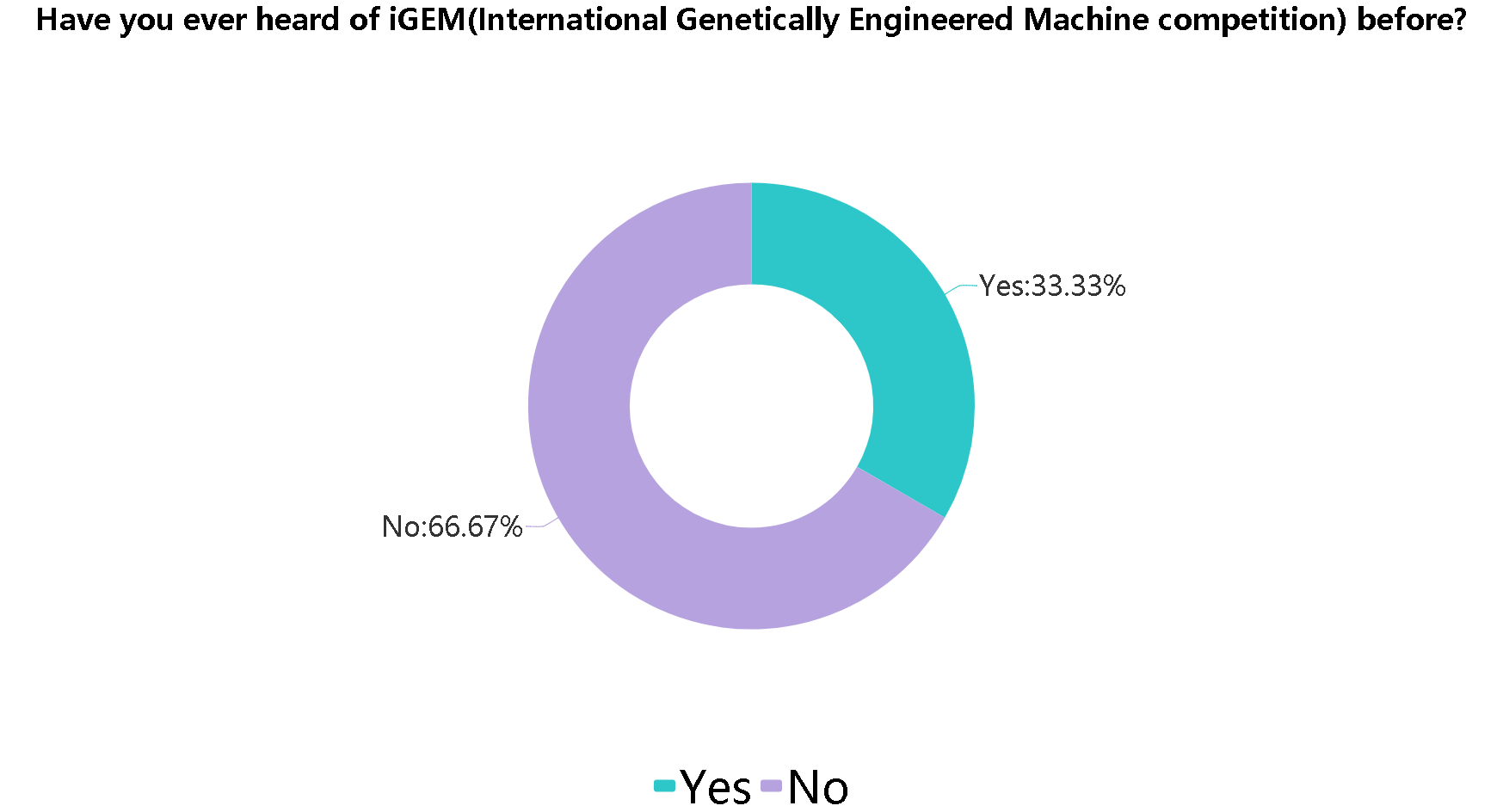 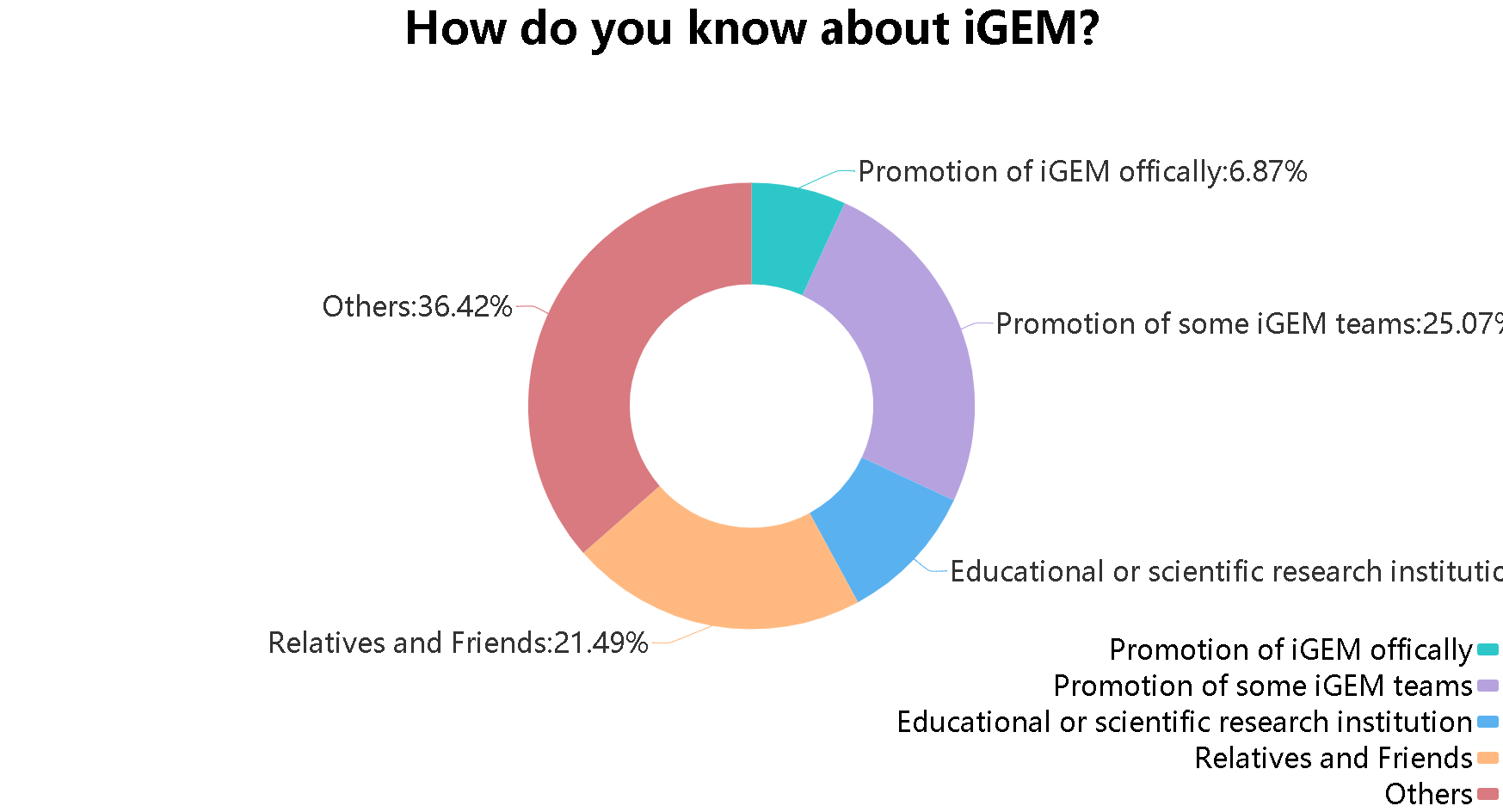 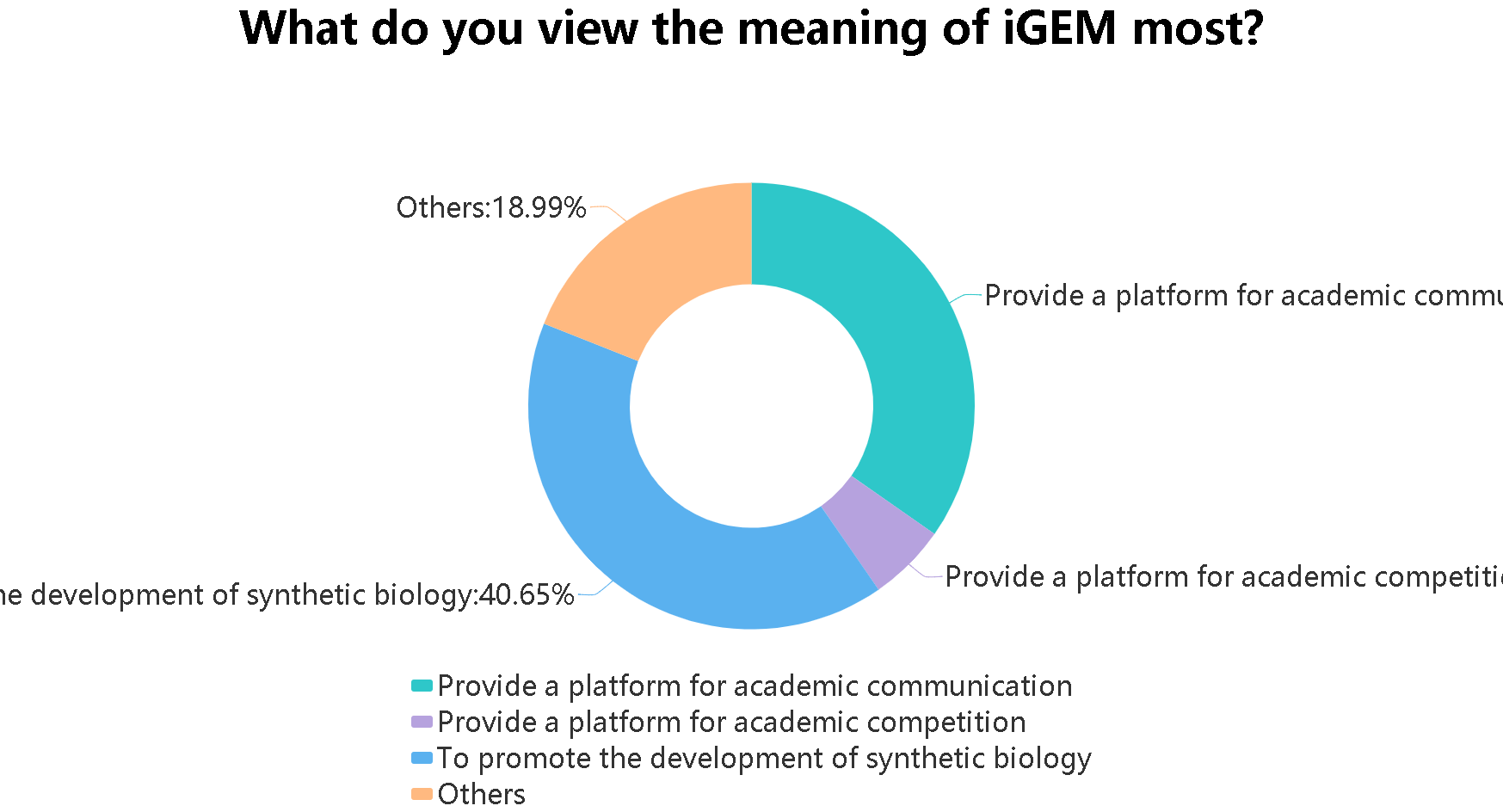 Among minors under the age of 18 and adults over the age of 30, the proportion of people who know iGEM is really small (less than 25%), but in the 19-29 age group (more than 92% are college or undergraduate),the proportion is quite high (more than 50%), indicating that iGEM's promotion among college students is quite successful. Expanding its influence throughout society is a further advocacy work for iGEM. (At the beginning of the questionnaire and tips for some questions, weposted the iGEM official website hyperlink and continue to introduce iGEM and synthetic biology knowledge.In other words, the promotion of this questionnaire also greatly promoted iGEM and synthetic biology.)

In summer, we attended The 6th iGEM Asia-Parcific Conference hosted by NCHU Taichung. The conference included official presentations along with Q&A and a poster session, which not only serves as a drill for the coming jamboree, but also inspires us with new ideas and valuable advice we can make good use of.Taking an active part in the conference, we shared our ideas and studies in synthetic biology and made a great deal new friends with different backgrounds. We sincerely acknowledge NCHU Taichung for their warm services and we gained a lot through the conference.

This year, we participated into a great party hosted by ShanghaiTech University——Conference of China iGEMer community (also known as CCiC). During this conference, amazing presentations were performed to show out every team’s creative project. In addition, during the panel session, members from each team came up to the stage to share their experience in this iGEM competition, either the happiest one or the most sorrow one. And also we communicated with a lot of teams about every we learnt from iGEM. Last but not least, during the conference, we met iGEM HQ Ms. Lizarazo who was really nice and kind. We had a long conversation about the whole iGEM competition, and we shared many stories about our team, which was an amusing meet-up.

Collaboration with other iGEM teams

This year HUST-China’s project is related to Shewanella, which we used in 2017, so they contacted with us for some help. We provide WT Shewanella, plasmid pYYDT, and E.coli wm3040 with them, and we also shared some experimental experience and gave some suggestions to them.

This year we got in touch with team Peking from Peking University during the 5th CCiC (Conference of China iGEMer community) and discussed about our projects. After that we kept in close touch, exchanging ideas about project and modelling, which we’ve learnt a lot from each other.

Team members from team Fudan came to USTC and we had an amusing meet-up. We communicated about our projects and provided advice with each other.

We came to Nanjing University to meet with members from team Nanjing-China. During the meet-up we had shared a lot about our project and some experience with each other.

This year, we and members from team XJTU-China, Jilin-China and BNU-China gathered together in a conference held by University of Science and Technology of China and had a short meet-up. We communicated about projects, interlab measurement, problems we met in experiments and so on. We all got some support from each other.