The single-cell model is a mathematical model of the species involved in our system. To describe the concentration of every species in the model, non-linear ordinary differential equations (ODEs) are applied and mainly based on mass action law and Hill equation. Most of the kinetic parameters are from literatures, but some without experimental data are estimated. The model is simulated with Matlab solvers to get the change of every components.

The construction of ODEs is based on the gene circuit and metabolic flux described as the figure below: 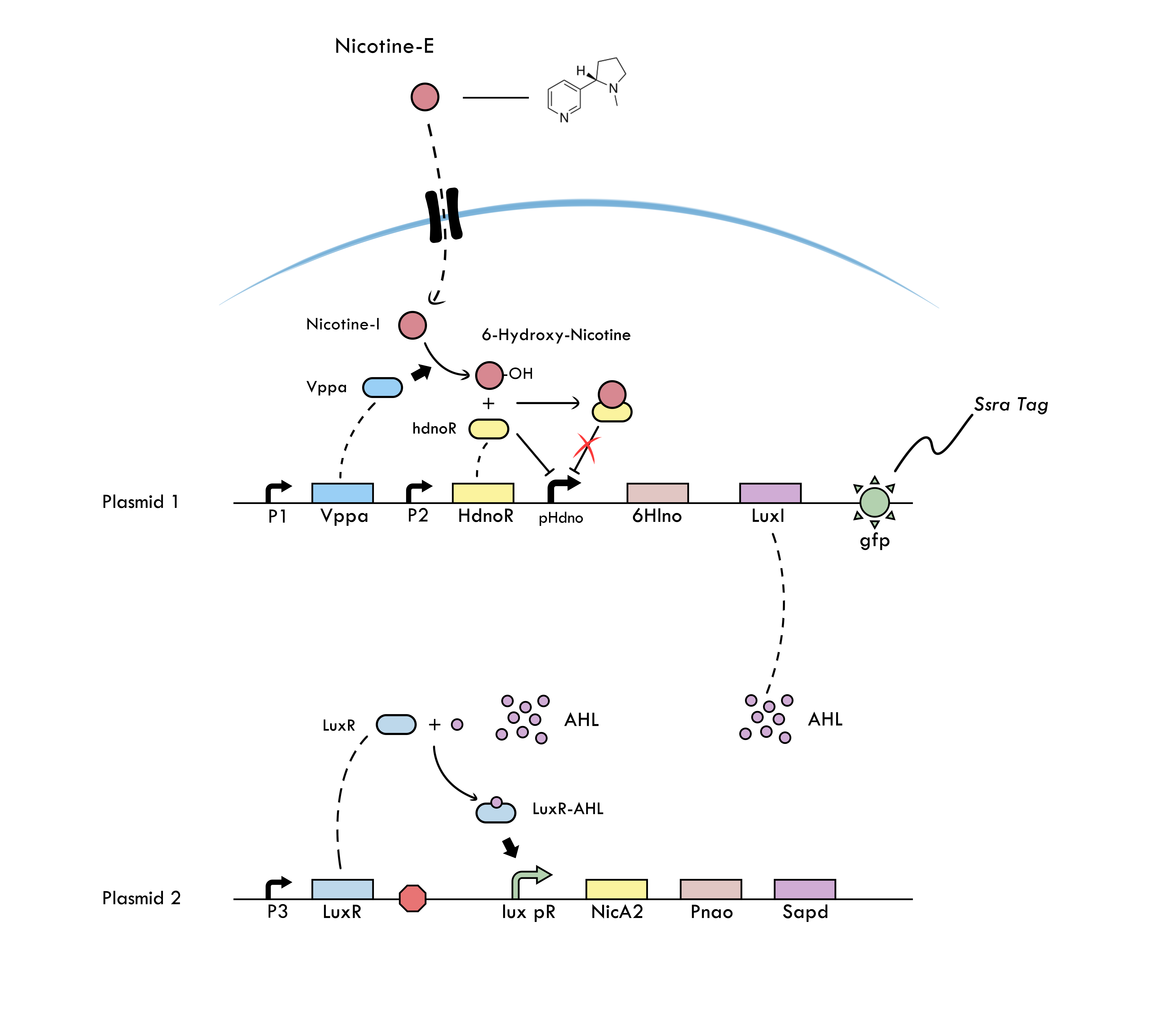 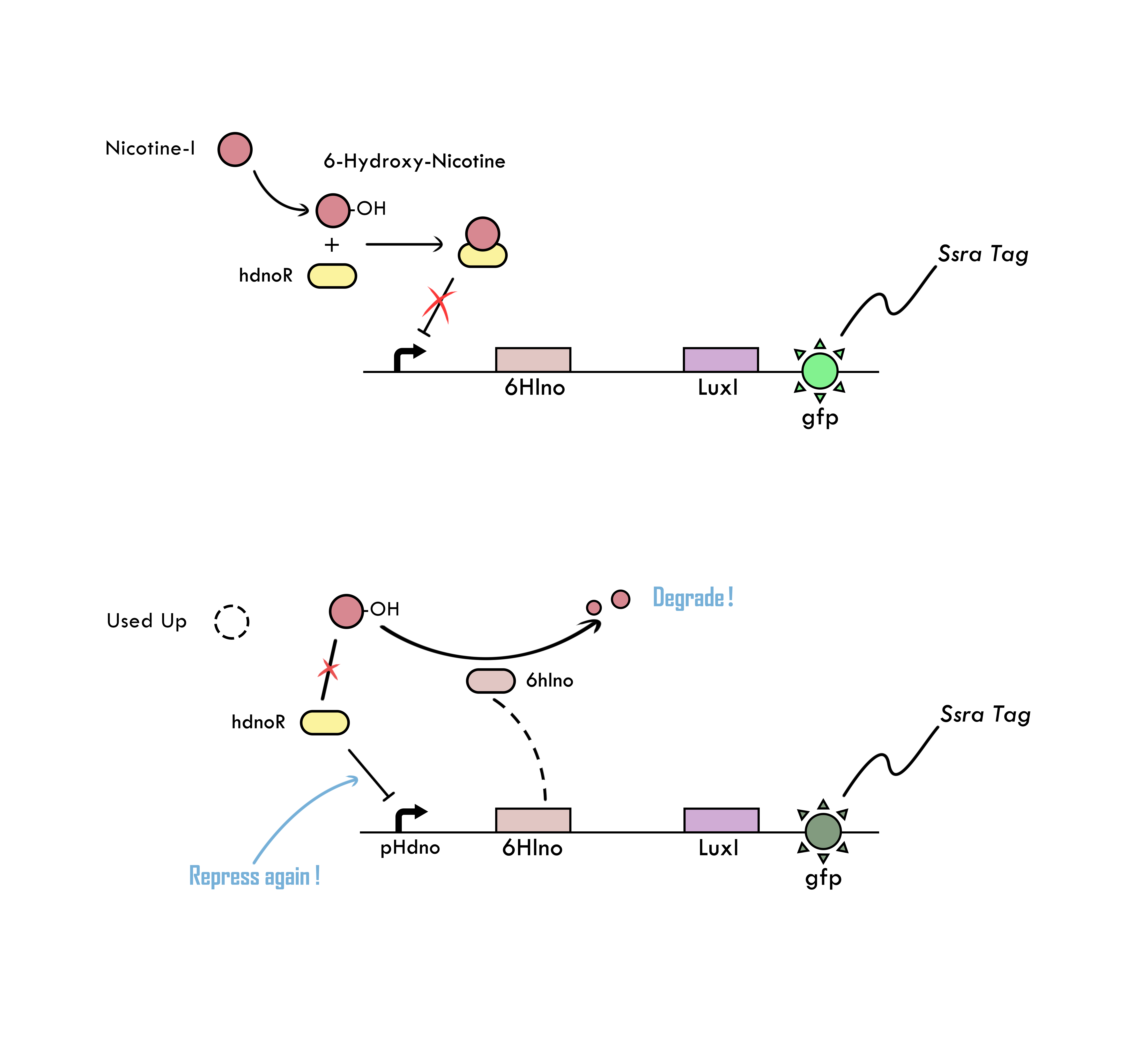 In consideration of slow synthesis of LuxI and LuxR but fast association and dimerization reaction, we neglect the impact of LuxR-AHL dimerization and AHL diffusion. The transcription of Lux pR is activated by LuxR-AHL following the Hill equation.

Equation 5 production of 3-Succinoyl-Pyridine from nicotine

The first step of our simulation is to obtain the initial state of the whole system. Before we add nicotine to the medium, the expression of the species involved in the circuit has already reached the equilibrium and kept in the steady state with tiny fluctuations. So we need to identify the initial concentration of these species in advance and the vector of initial state can be used as the initial condition for solving the ODEs with nicotine. To insure all species in equilibrium, we set the simulation time to 50000 s. 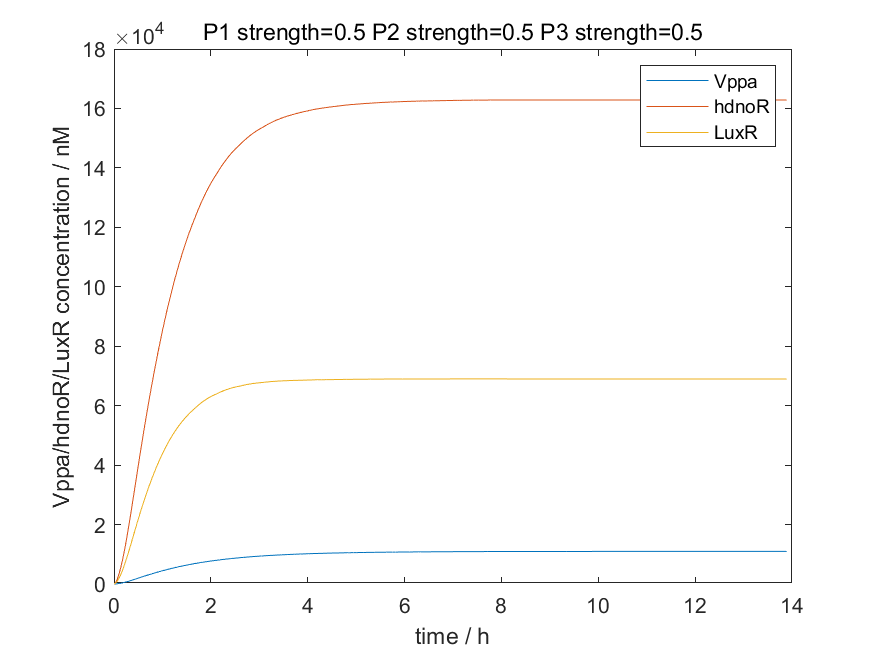 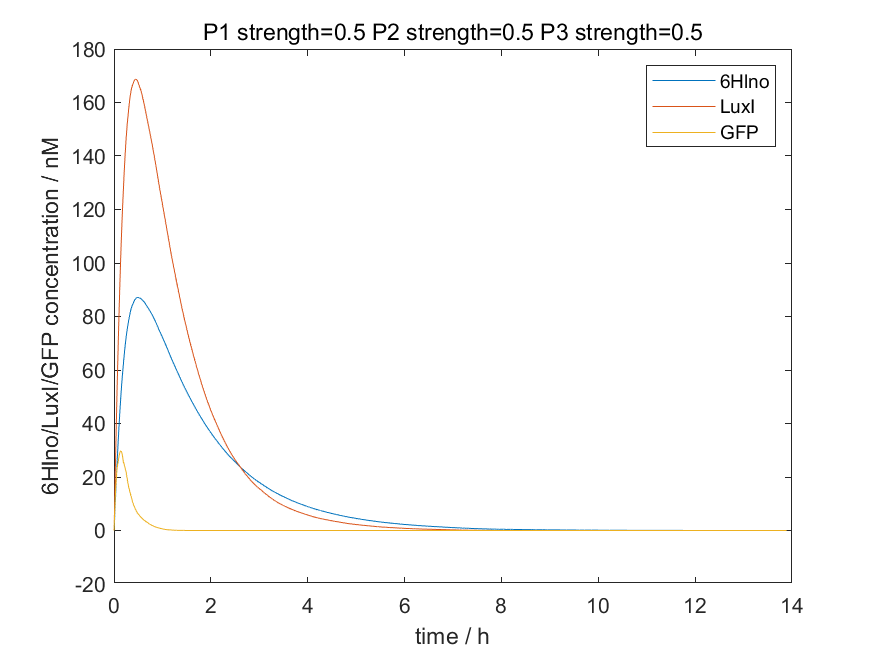 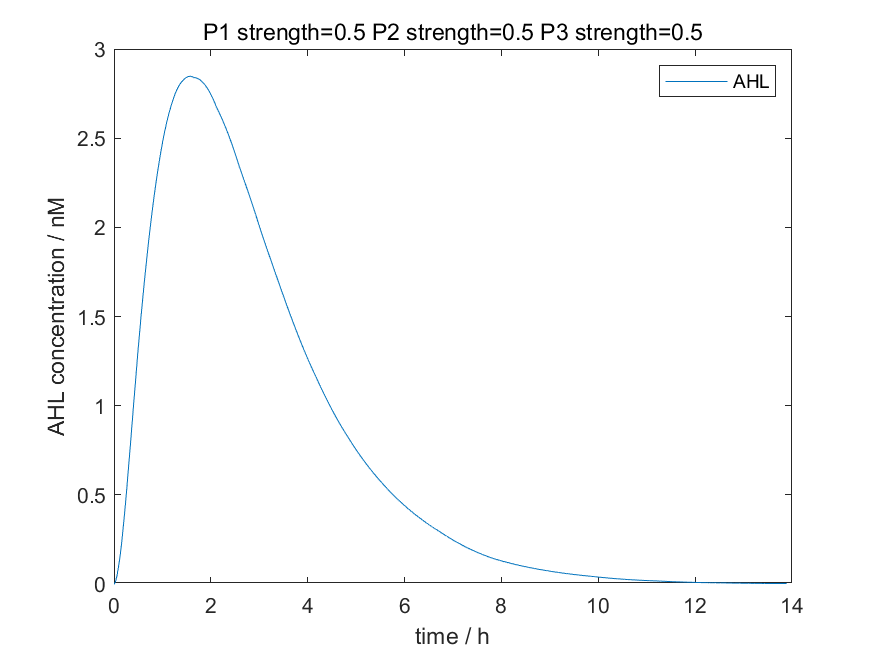 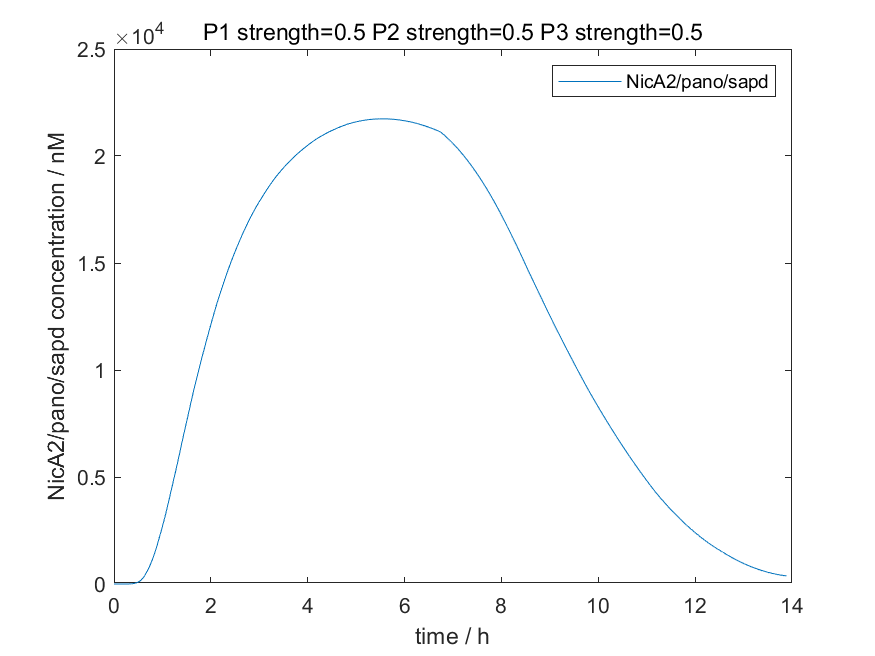 We hope that little signal of GFP can be observed and AHL concentration is lower than 0.1 nM to avoid the activation of degradation system expression. From the result of modeling, we can find that the expression of GFP is very low in equilibrium (Figure 4b). However, the maximum concentration of AHL is about 2.7 nM (Figure 4c), which means that the leaky expression of degradation system is possible. Although the maximal quantity of NicA2 protein can be very high, the expression declines to a low level after 14h which is in the time range for bacteria cultivation. Our results show that leaky expression of NicA2 does exist but the system can reach to an ideal initial steady state after some time. So we confirm that the requirement of the initial state is met by our circuit and setups in theory. 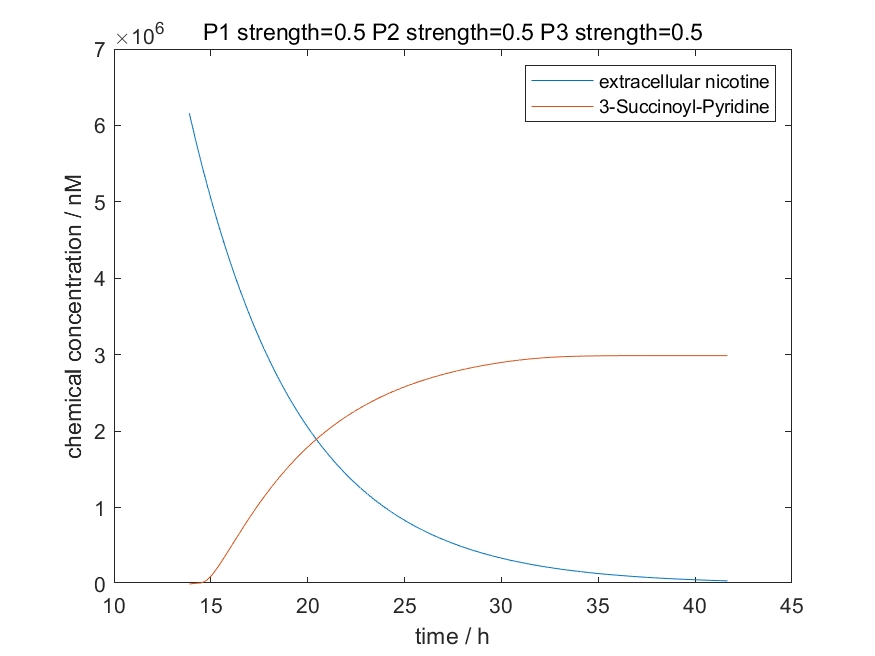 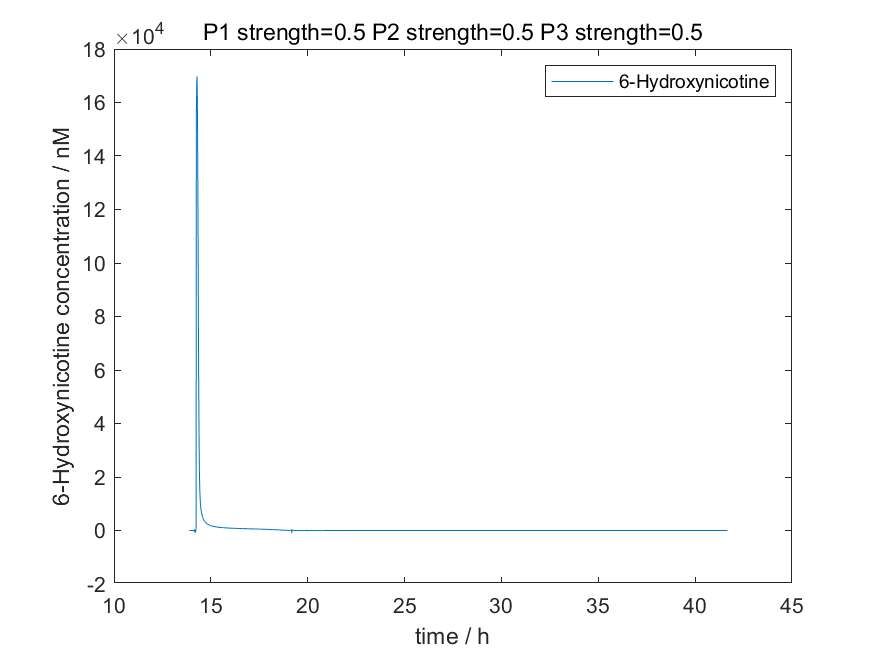 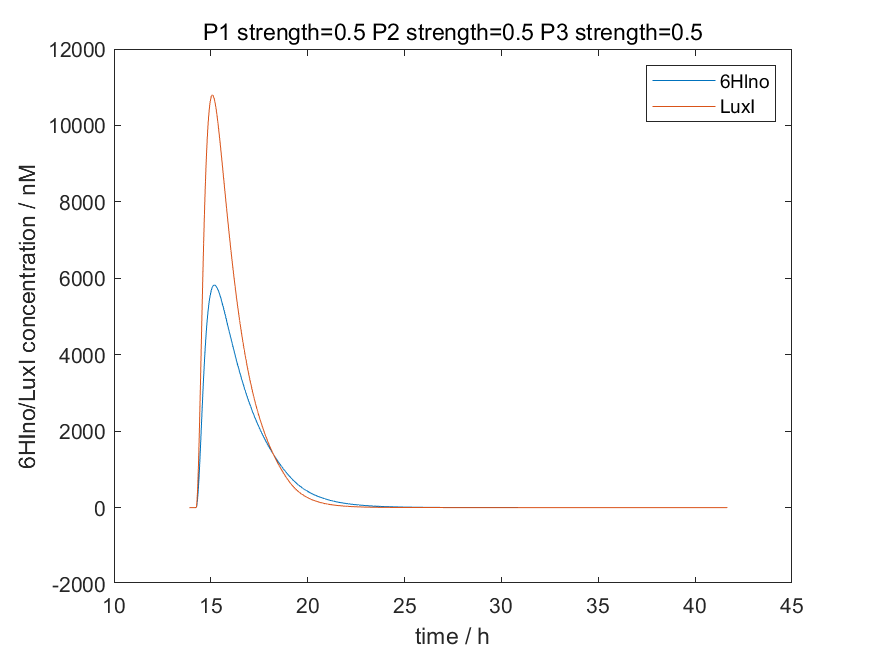 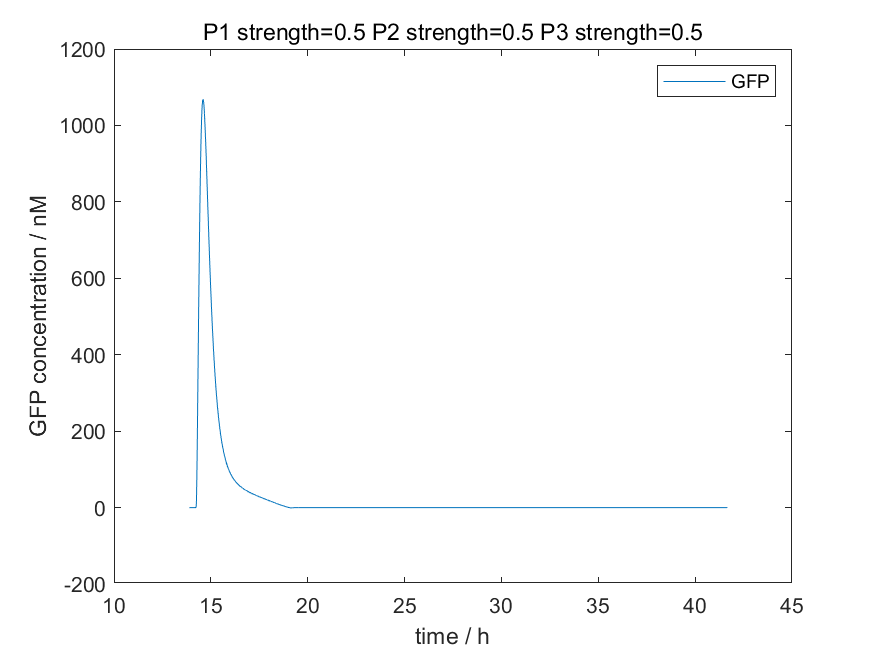 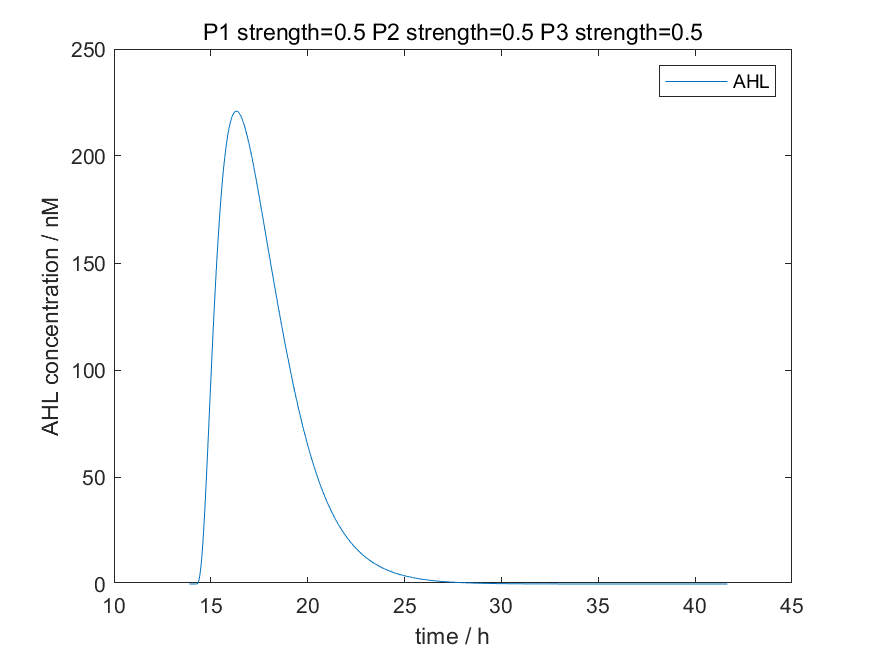 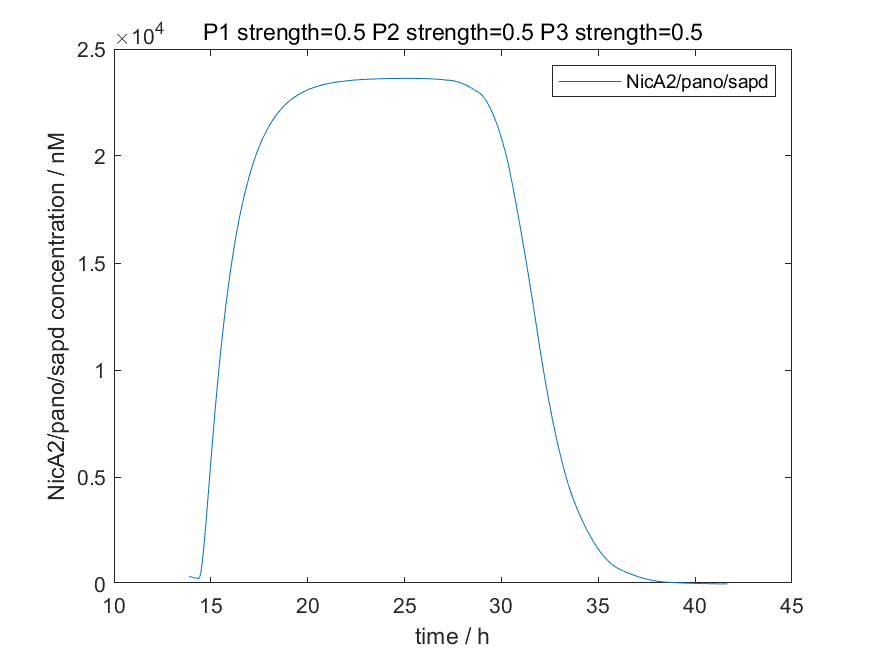 The simulation time is from 50000s to 200000s so that every species in the circuit can reach the equilibrium at last. After 42 min, the concentration of GFP reaches maximum value 1070 nM (Figure 5d). The stop time of GFP signal is about 6 hours after adding nicotine. Because we add SsrA tag to GFP molecule which increases the degradation speed of GFP to be 10 times faster than normal condition, so the time of GFP exhaustion is earlier than 6Hlno and LuxI. AHL concentration can be as high as 220 nM, 3-fold higher than the AHL threshold for expression activation (Figure 5e). AHL molecules are exhausted after 15 hours. About the uptake of nicotine, it is obvious that the tendency of extracellular nicotine change is similar to the negative exponential function which accords with our theory of model. The burst of 6-Hydroxynicotine after 24 min is because of the increase of intracellular nicotine (Figure 5b). But as the synthesis of 6-Hydroxynicotine, repression by hdnoR is released and high expression of 6Hlno leads to the fast degradation of 6-Hydroxynicotine. At the same time, over 24000 nM NicA2 are expressed after about 2.5h and transform intracellular nicotine to 3-Succinoyl-Pyridine (Figure 5f, Figure 5a). It takes approximately 31h to reach the maximal transformation of nicotine (Figure 5a). The final concentration of 3-Succinoyl-Pyridine is 0.003 M, about half of the nicotine input. 9 h after complete degradation, the degradation system is shut down. From these data, we can conclude that our system can uptake nicotine, activate the expression of downstream gene elements and degrade nicotine to 3-Succinoyl-Pyridine in a relative short time.

The result shows that our system can realize the expectations of the design. At first, our circuit guarantees the low expression of GFP/6Hlno/LuxI under the control of hdnoR without nicotine in the system. Second, the model shows that the speed of nicotine uptake is enough to activate high enough expression of GFP and NicA2 in a relative short time, so we can monitor the existence of nicotine in the medium judging by the color of bacteria. At last, half of nicotine can be transformed to the end product and shut-down of degradation system is achieved by the degradation of 6-Hydroxynicotine with 6Hlno. After simulation, we get a series of data which can be used as the reference for the experiment design about the concentration of some species and the optimized sampling time.