In the part of system analysis, we have talked about the influence of promoter strengths and plasmid copy numbers to initial steady states and expression level of gene elements after sensing nicotine. The goal of our project is to detect nicotine and transform nicotine to more valuable chemicals, so it is necessary to evaluate the performance of sensing system like threshold and timeliness. Besides, because part of nicotine is degraded to 6-Hydroxynicotine which is out of the pathway of 3-Succinoyl-Pyridine metabolism, we need to calculate the rate of nicotine transformed to the target product. Parameter sweep provides us appropriate parameter intervals for system design, so effectiveness analysis is based on these parameter settings (s2 = 0.5, s1 = 0.5, plamid1 copy number =10, plasmid2 copy number = 10). We mainly focus on the threshold of sensor, time point suitable for fluorescence measurement, the recycle rate and the relationship between nicotine input, promoter1 strength and these three properties. 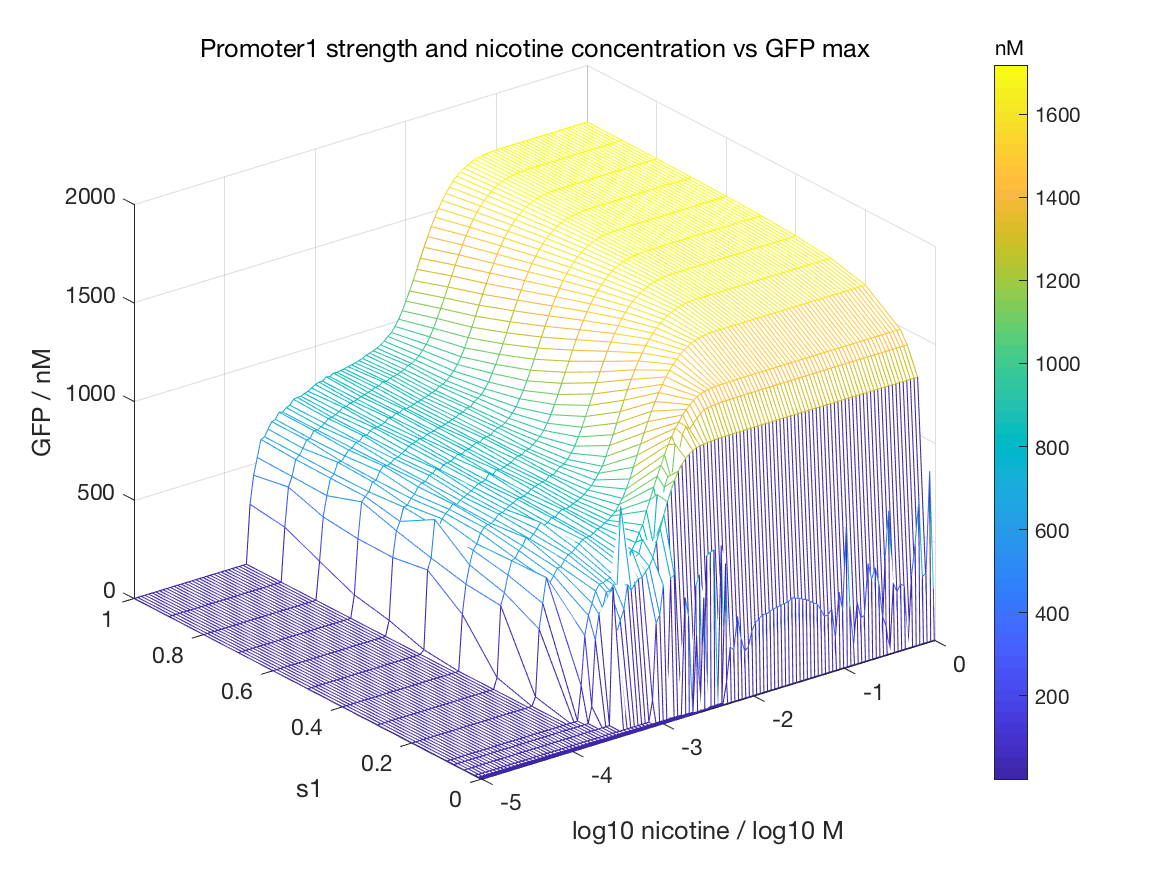 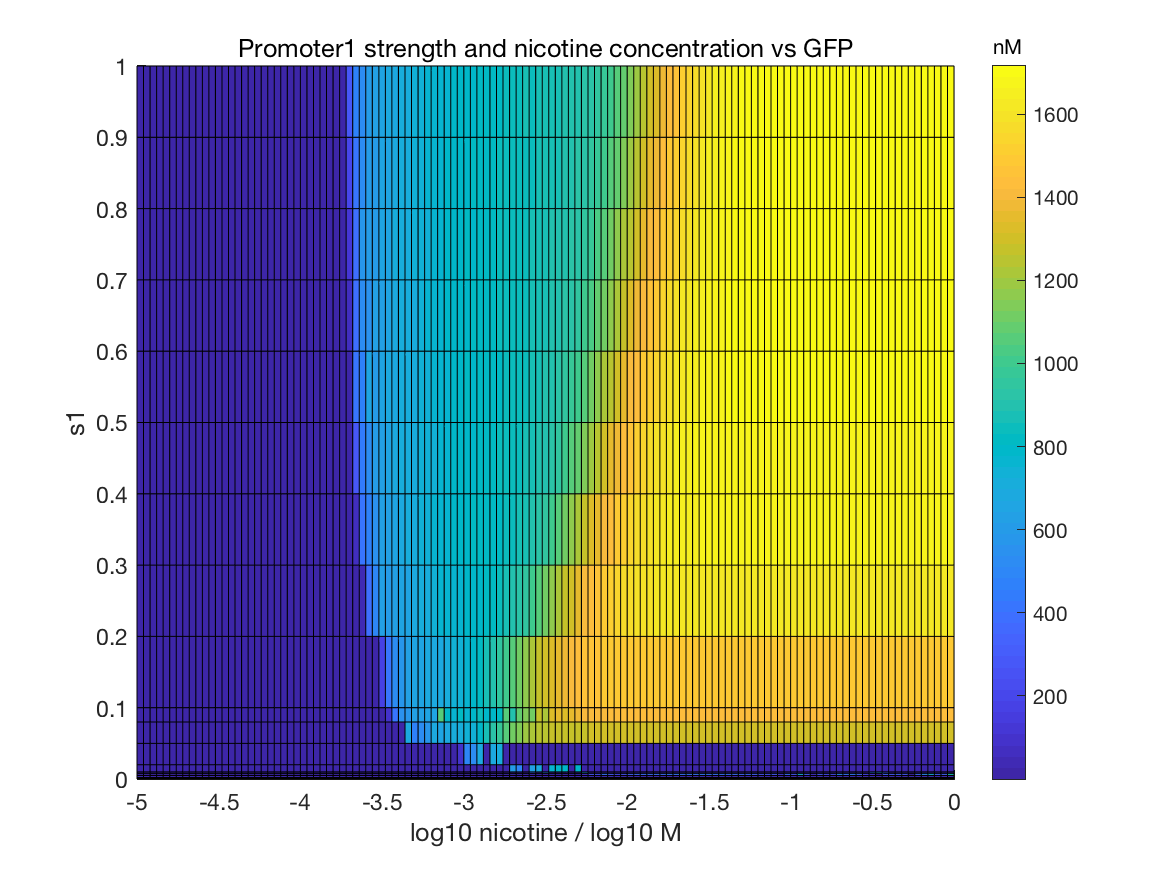 The nicotine input we set is within the interval of [1e-5,1] M and the strength of promoter in is within [0,1]. To get the full vision of GFP change along the time span, the simulation runs for 200000 s. From figure 1 and figure 2, we find that the maximal GFP concentration ranges from 0 to about 2000 nM with the increase of nicotine input. However, the strength of promoter 1 has no significant impact on the GFP maximal concentration. The heat-map shows that when nicotine input is lower than 3.5e-5 M, the GFP concentration is relative low and undetectable.

We define fluorescence intensity more than 100 a.u. as significant result because the data of our interlab shows that the basal fluorescence of medium is about 60 a.u. under the same excitation wavelength light. This requirement determines a detection limit of GFP concentration. The lowest of nicotine concentration to be detected is decided in turn: 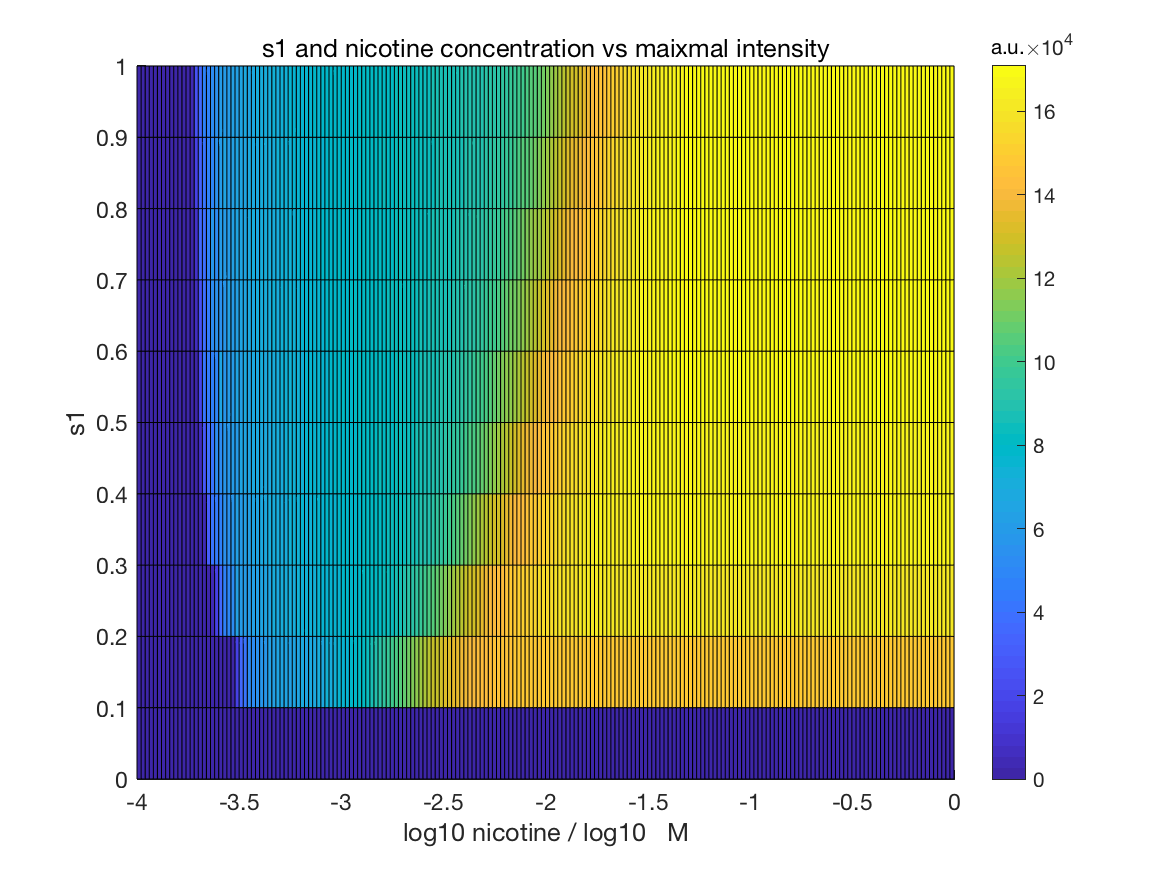 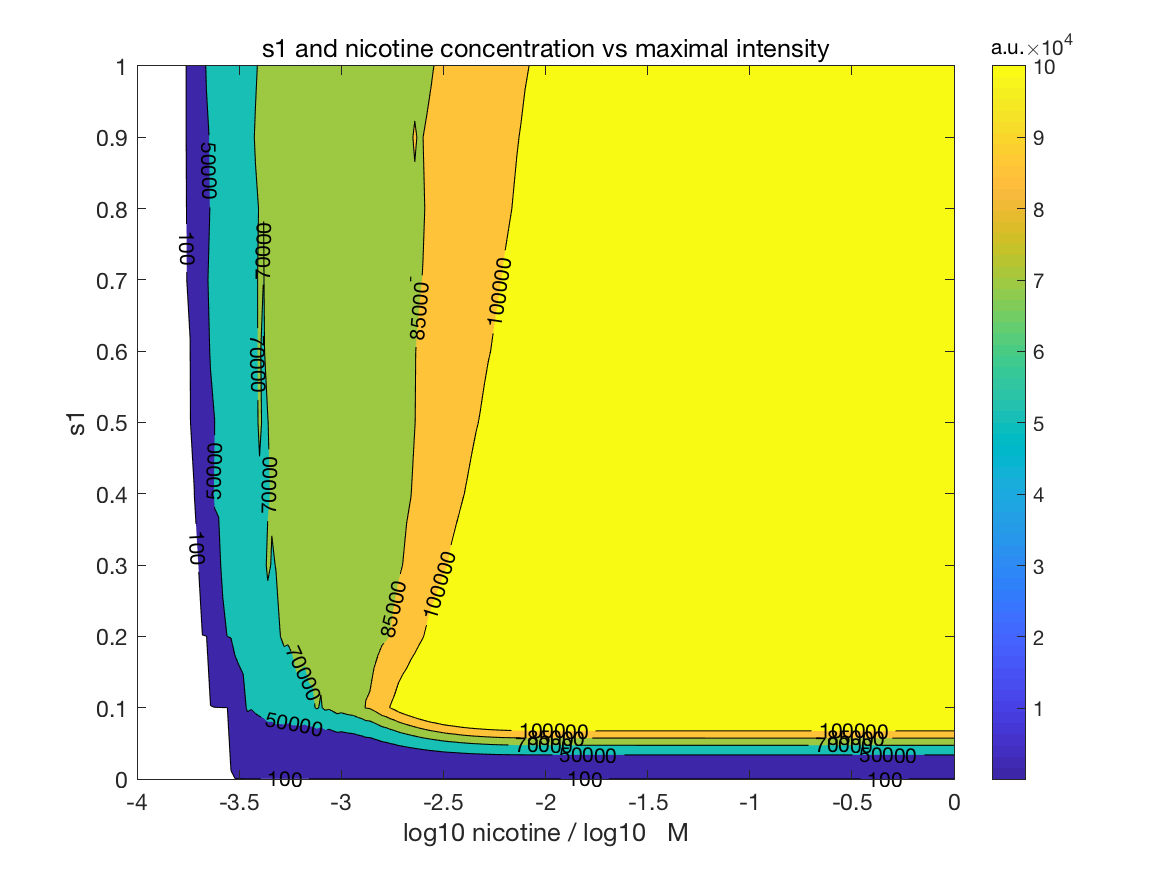 In conclusion, the threshold of our sensing system is above 1e-3.6 M nicotine and the threshold does not strongly shift with the decline of promoter 1 strength.

Last section, we talk about the threshold of the sensing system which is related to the detection limit of sensing system. This part we want to analyze the response of GFP signal to different nicotine input. The nicotine input is set to be within [1e-4,1] M to cover the interval including no GFP response and strong GFP response. Because the interval we set is small, we define sensitivity according to the logarithmic nicotine concentration as the equation below

Due to the application of difference without the calculation of limit value, the sensitivity value is not completely same as the real differential coefficient of GFP intensity-nicotine input curve. To increase the accuracy and smooth the sensitivity-nicotine curve, the sampling interval of log10 nicotine is set to 0.001. 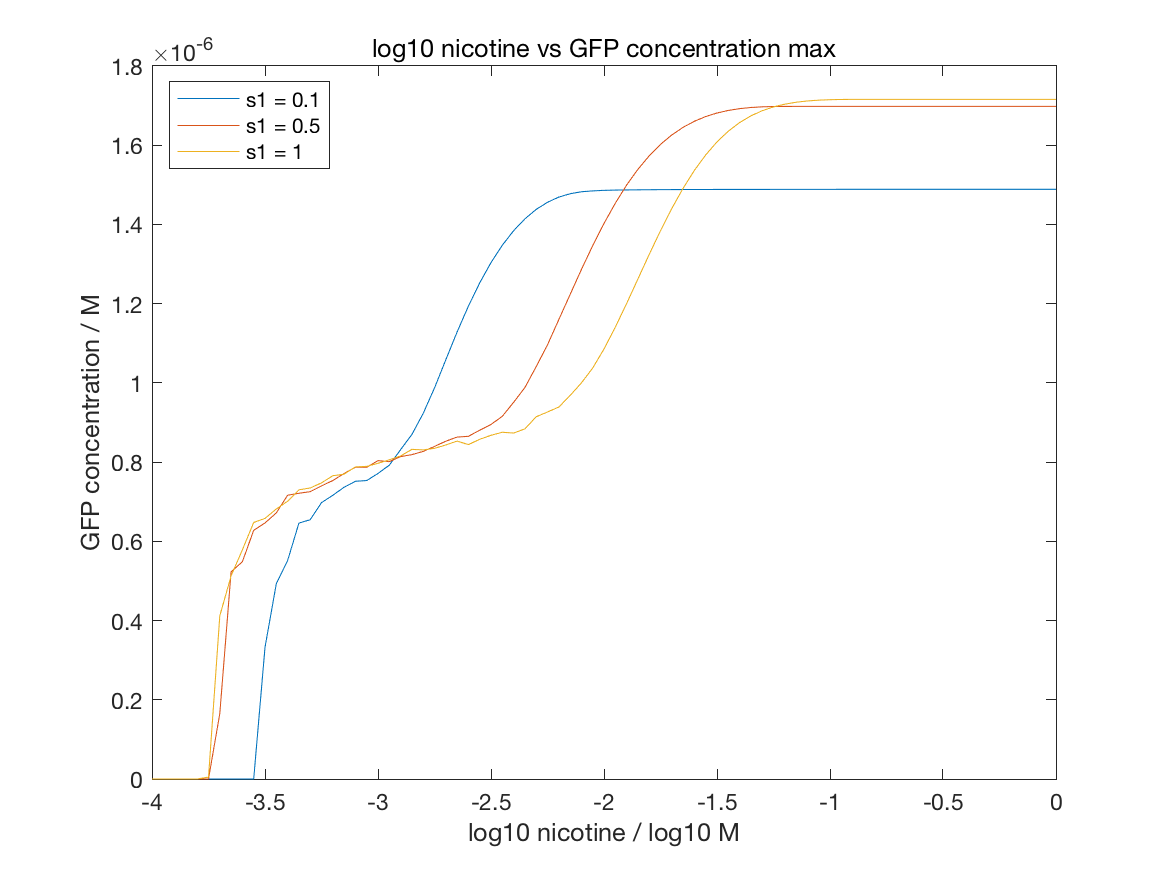 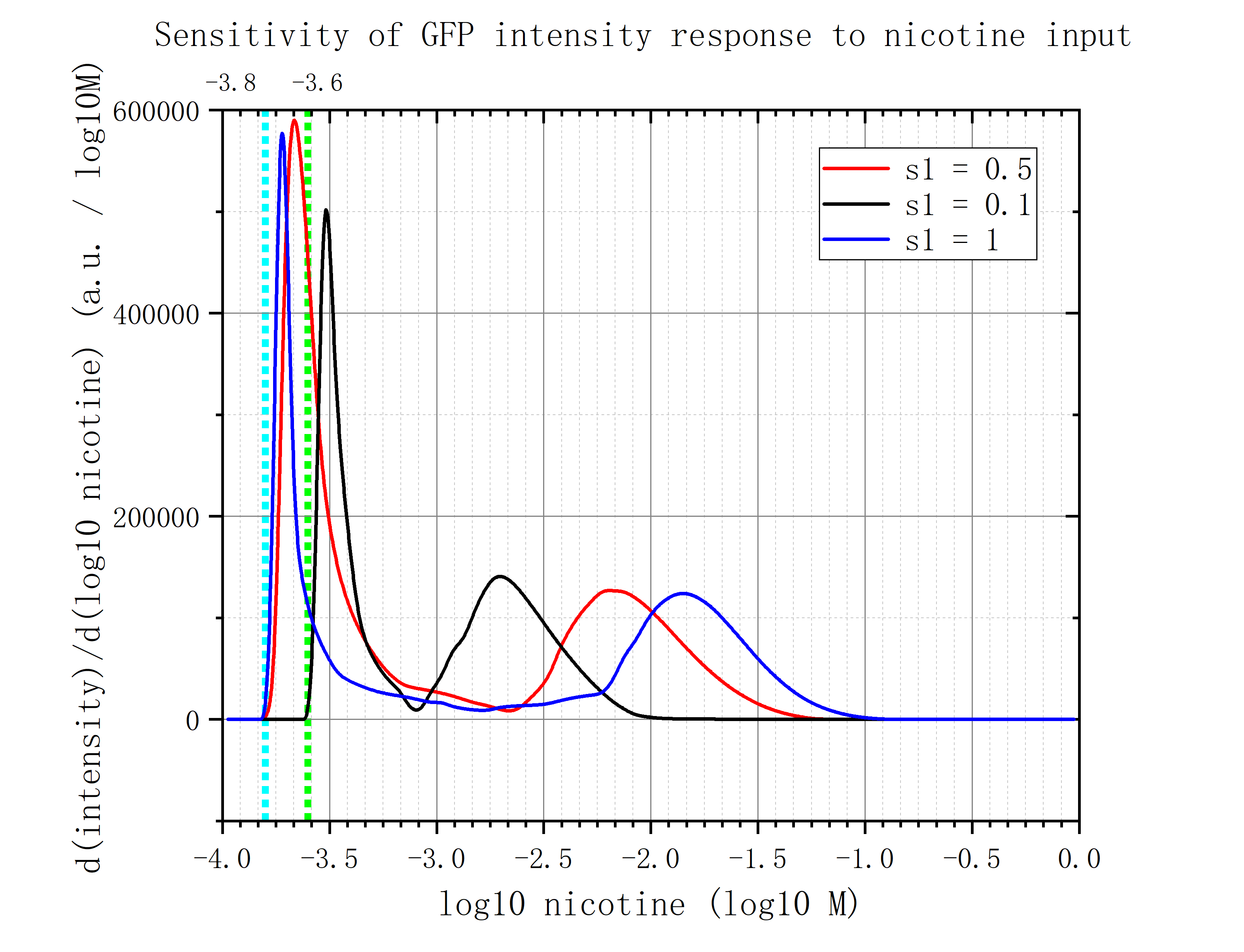 The variation between promoter 1 strength may influence the GFP signal response to nicotine input, so we select three groups for comparison: 0.1 (group1), 0.5 (group2) and 1 (group3). Figure 5 shows the change of GFP maximal concentration with different nicotine input. All three groups have two bursts in the curve, which means that there are two regions with high sensitivity. This phenomenon is also reflected by figure 6. When nicotine input is between 1e-3.8and 1e-3 M, three groups have very strong sensitivity. The left boundary of the interval is the threshold of the sensing system, which is about 1e-3.8 M for group 2/3, and 1e-3.6 M for group 1. But for the second burst, the interval of the three groups vary a lot. The burst interval of the three groups is [1e-3.2, 1e-2] M, [1e-2.7, 1e-1.3] M and [1e-2.3, 1e-1] M separately. This difference of sensitivity distribution means that we can select specific promoter 1 strength to achieve high sensitivity and precision sensing and measurement in the defined nicotine input range. This idea can be developed to a new application in our future work.

In the experiment, we need to choose the appropriate time to measure the GFP signal to determine the existence and concentration of nicotine in the medium. Besides, to collect the maximal quantity of final product, it is important to select the time point when 3-Succinoyl-Pyridine reaches highest concentration. This session we simulate the change of GFP/NicA2/3-Succinoyl-Pyridine and identify the start time of observable GFP signal and the duration time of GFP signal and NicA2 high expression. At last, according to simulation results, we propose the end time of degradation reaction as the reference to experiment design.

GFP is the fluorescent signal which means the existence of an amount of nicotine in the medium, so we first analyze the process of GFP signal production and attenuation. Figure 7 shows that the variation of time for reaching 100 a.u. is small among different groups and the average time is shorter than 5 min. However, the time for signal complete attenuation (under detection limit) varies a lot which increases greatly with more nicotine input. About the time for reaching maximal GFP intensity, it is interesting that more nicotine input and stronger promoter 1 may lead to longer period for GFP signal maximization, because more Vppa expression means more 6-Hydroxynicotine produced initially to release hdnoR repression quickly. Then we calculate the time interval, which is set to be the time for GFP intensity above 95% GFP maximum, for measuring GFP max intensity. The time interval changes a lot among various nicotine input and the maximal timespan is about 700 min. 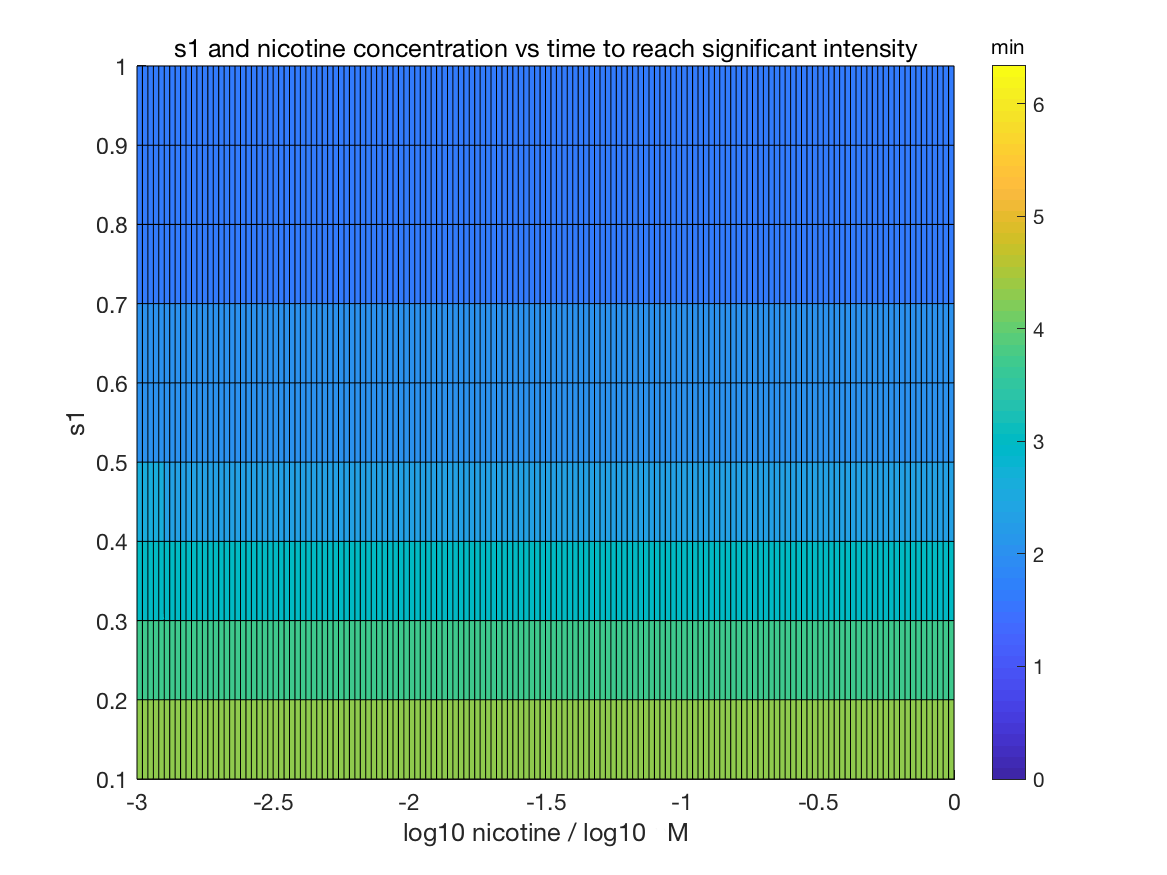 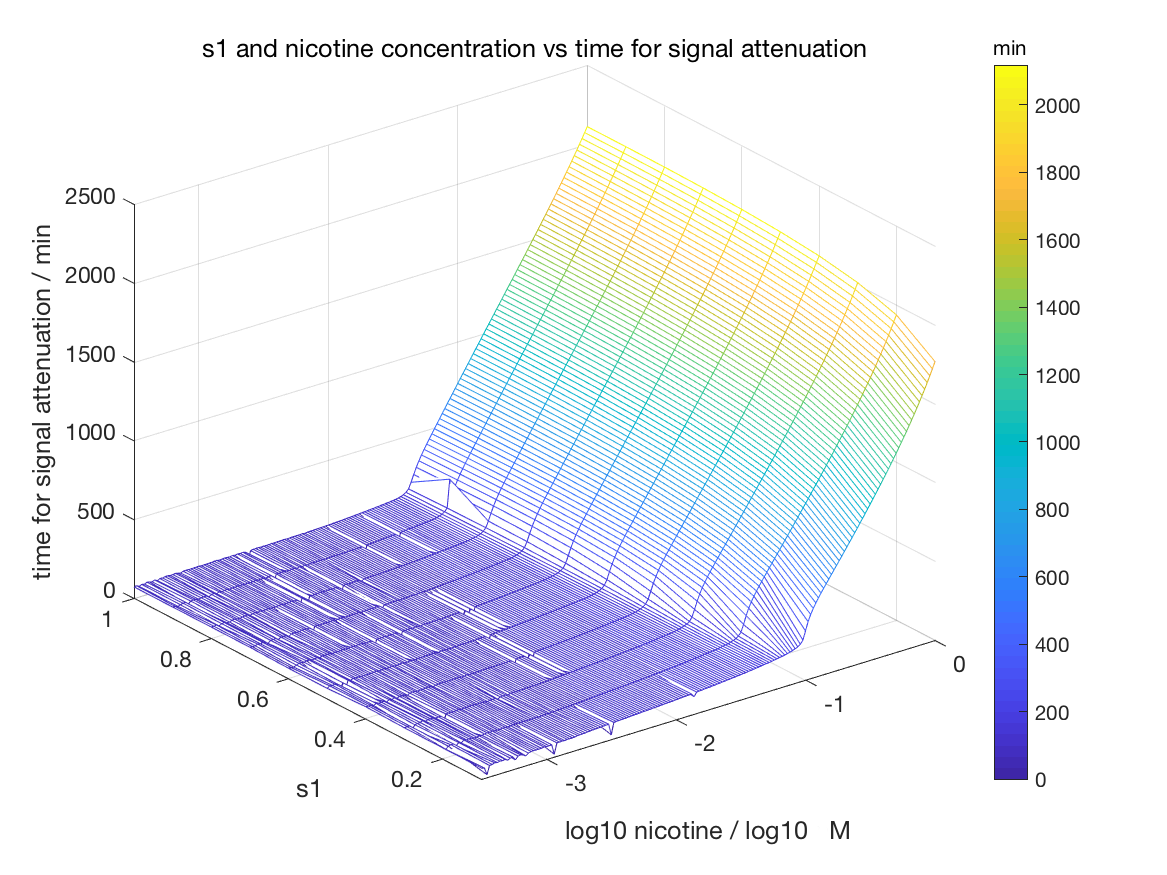 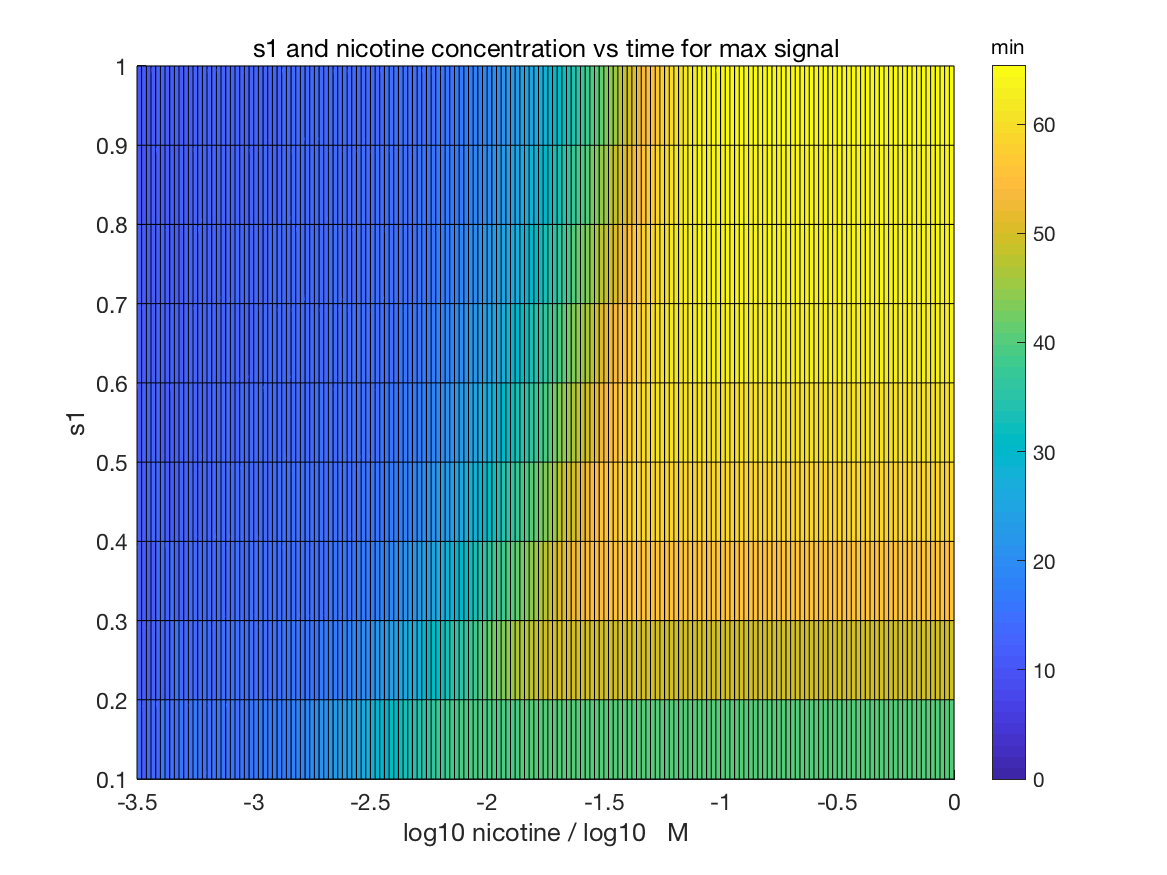 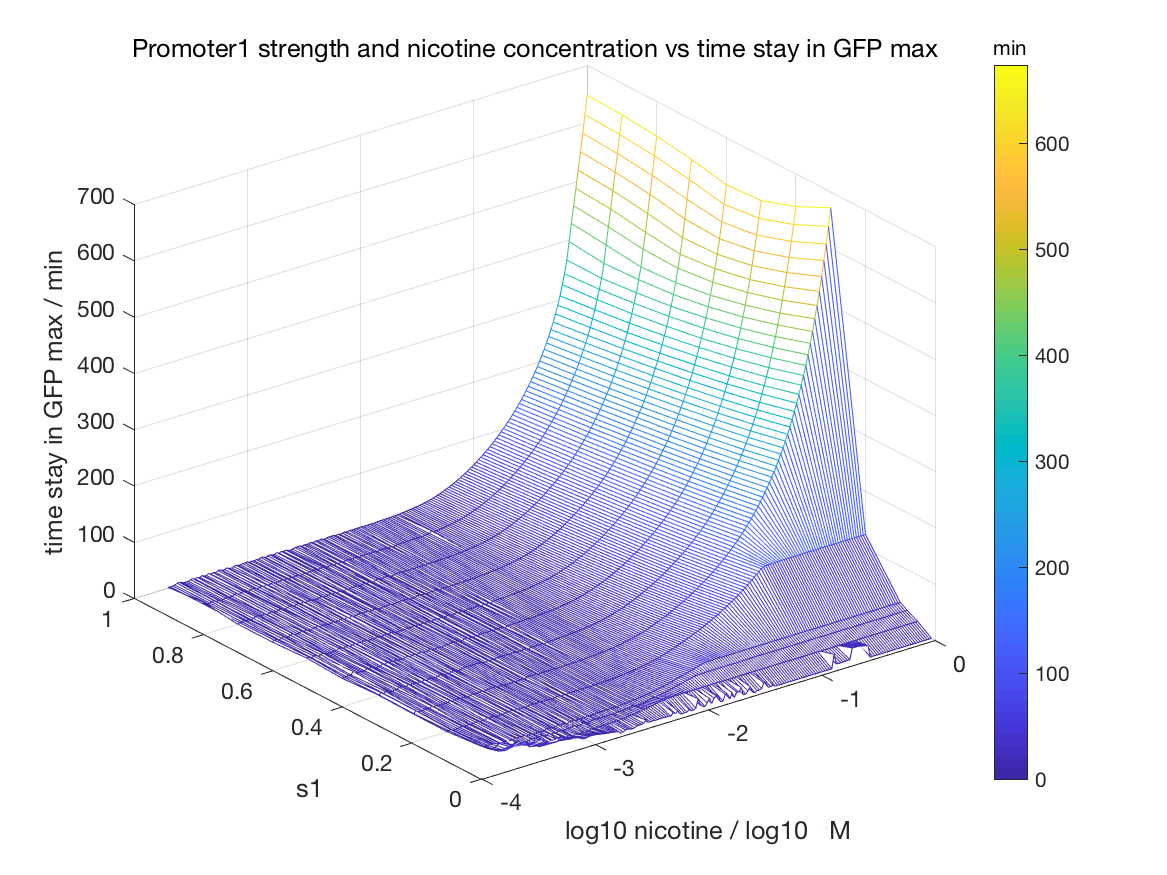 The second signal is AHL molecule synthesized by LuxI. The lowest concentration of AHL to activate the transcription of Lux pR is about 0.1 nM, so we calculate the time in which AHL stays in a functional concentration. For nicotine input is lower than 0.1 M, the functional timespan is about 500-1000 min. With higher nicotine input, the state in functional AHL amount can last for over 2500 min. 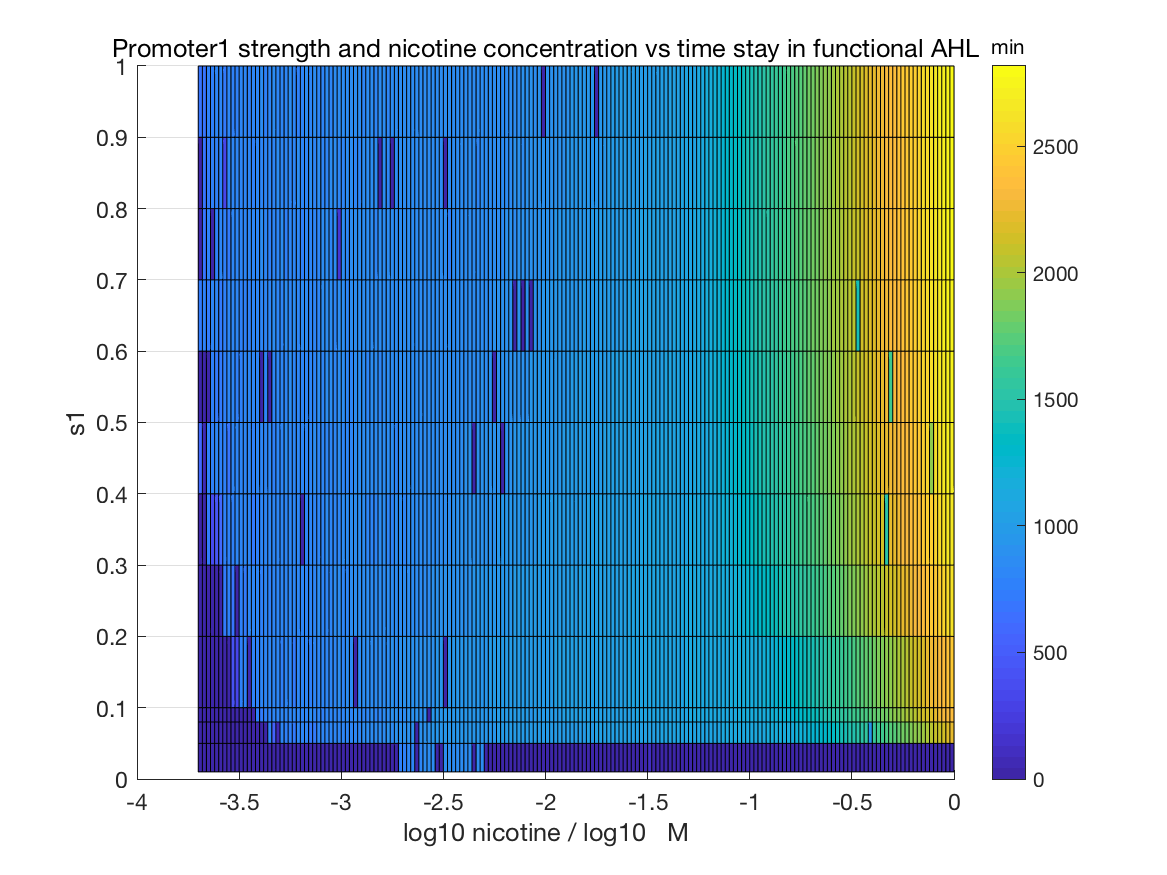 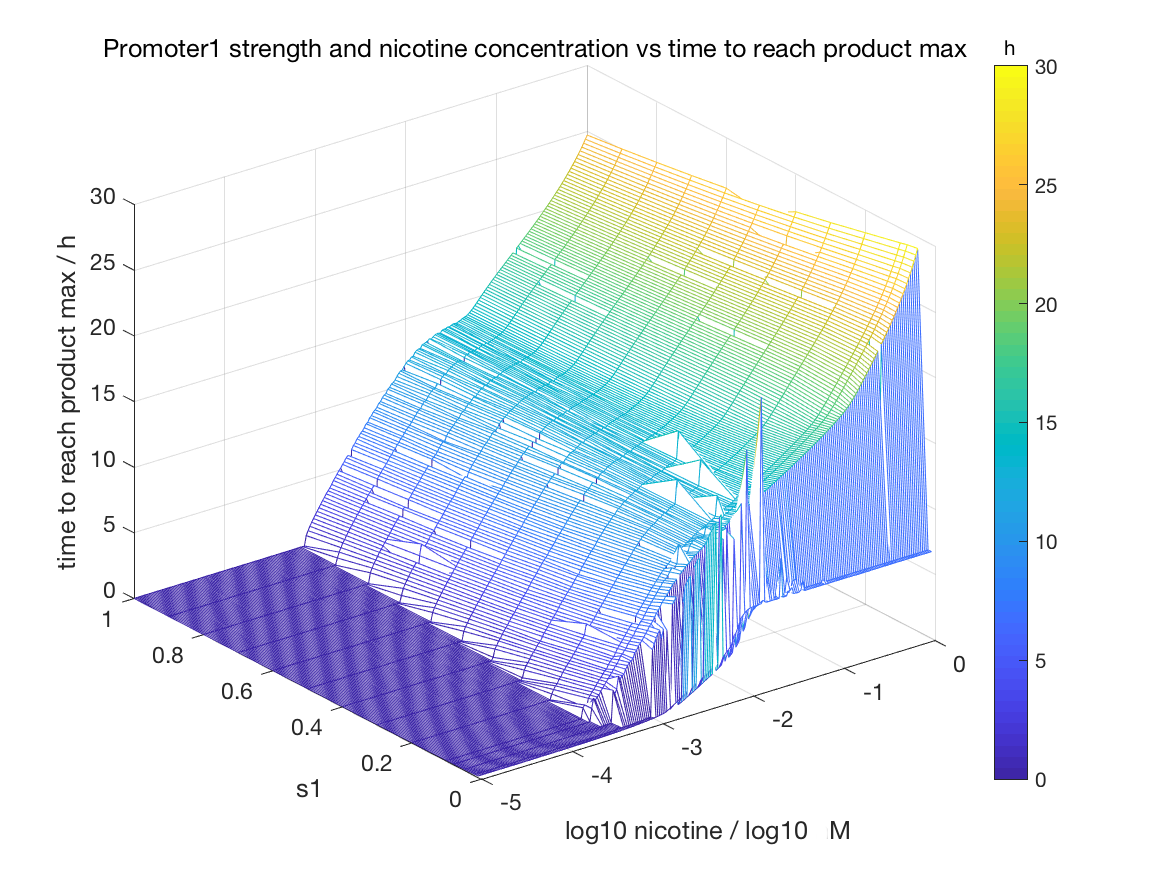 In the last part, to collect the final product 3-Succinoyl-Pyridine in highest concentration, the time for reaching maximal concentration is calculated. From figure 12, we notice that the range of time is from 0-30 h and the change of time is strongly related to nicotine input but the impact of different promoter 1 strength seems not significant. The possible reason is that the time of GFP signal activation does not vary a lot (0-60min) as described above which means the time for signal induction does not account for a large portion in the total time for nicotine degradation.

The recycle rate of nicotine

The final goal of our system is to transform nicotine from tobacco waste to 3-Succinoyl-Pyridine which is a valuable intermediate for chemical synthesis of medicine. Because some portion of nicotine is catalyzed to 6-Hydroxynicotine to operate the sensing system, not all nicotine is transformed to 3-Succinoyl-Pyridine. We need to evaluate the extent of end product production with certain input of nicotine to validate the efficiency of degradation system. To describe the transformation rate, we define a concept called ‘Recycle rate’ calculated as below: 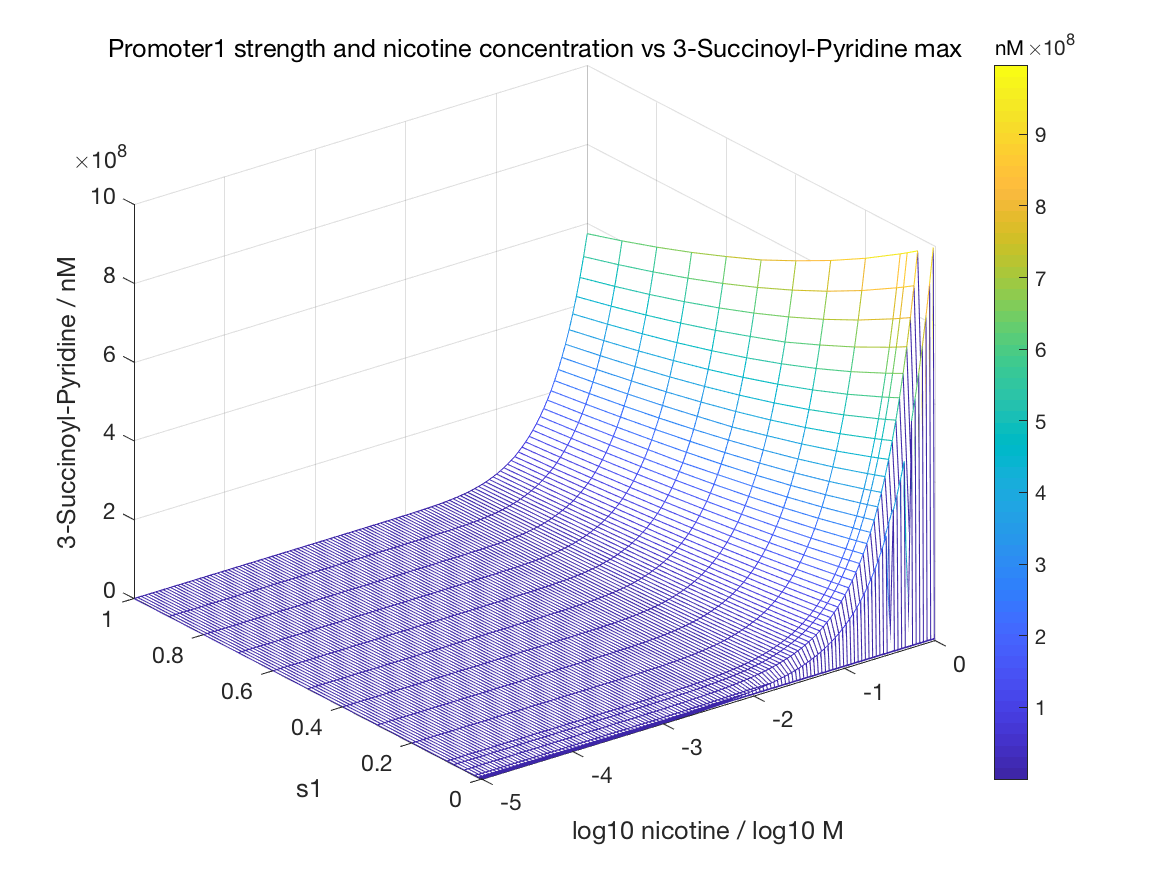 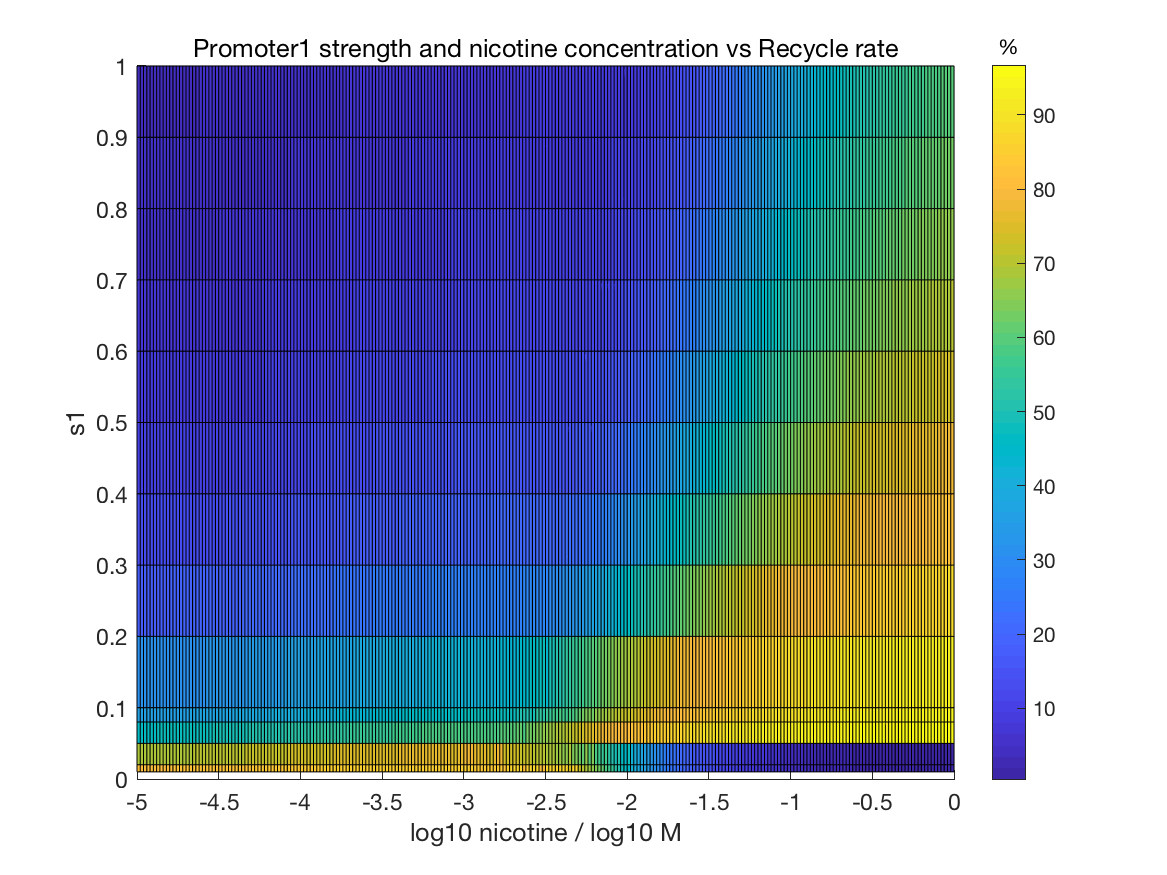 From figure 13, it is transparent that the relation between 1og10 nicotine input and product concentration follows the exponential function. But the amount of final product is not so strong related to promoter1 strength. Only when nicotine input is in high concentration, product amount tends to decline with the increase of s1. It is expectable because stronger promoter1 expresses more Vppa which transformed more nicotine to 6-Hydroxynicotine rather than 3-Succinoyl-Pyridine. About the recycle rate, we notice that when nicotine input is more than 0.01 M, stronger promoter1 leads to the attenuation of recycle rate. The maximal recycle rate is nearly 100% with small s1 which means that our system is efficient in transforming nicotine.

According to the results of simulation, with defined promoter3 strength, promoter3 strength, plasmid 1 copy number, plasmid 2 copy number, the systematic properties mentioned above is significantly affected by the concentration of nicotine input. Only with high amount of nicotine input, the influence of promoter 1 strength is amplified to an observable extent. We can acquire many valuable information about the rough value or interval of these properties, then these data can be used as reference for exact experiment design such as the choice of sampling time or nicotine input amount.