This year we are very honored to participate in the Fifth International InterLab Measurement Study. We chose to follow the Plate Read and CFU Protocol in the measurement. Firstly we made three sets of unit calibration measurements: an OD600 reference point, a particle standard curve, and a fluorescein standard curve. Then we finished the cell measurement and measured both fluorescence and absorbance in hour0 and hour6. We also made the Colony Forming Units (CFU) measurement and calculated the CFU per 1 mL. Finally we uploaded our data on time and it had been accepted.

A key component to all engineering disciplines is reliable and repeatable measurement which is the same holds true for synthetic biology. The goal of the iGEM InterLab Study is to identify and correct the sources of systematic variability in synthetic biology measurements, so that eventually, measurements that are taken in different labs will be no more variable than measurements taken within the same lab. In the previous studies, iGEM InterLab Study showed that by measuring GFP expression in absolute fluorescence units calibrated against a known concentration of fluorescent molecule, the variability in measurements between labs can greatly be reduced. However, when taking bulk measurements of a population of cells (such as with a plate reader), there is still a large source of variability in these measurements: the number of cells in the sample.

Because the fluorescence value measured by a plate reader is an aggregate measurement of an entire population of cells, which need to divide the total fluorescence by the number of cells in order to determine the mean expression level of GFP per cell. Usually we do this by measuring the absorbance of light at 600nm, from which we compute the “optical density (OD)” of the sample as an approximation of the number of cells. OD measurements are subject to high variability between labs, however, and it is unclear how good of an approximation an OD measurement actually is. If we used a more direct method to determine the cell count in each sample, then potentially we could remove another source of variability in our measurements.

This year, the iGEM Measurement Committee want our help in answering the following question: Can we reduce lab-to-lab variability in fluorescence measurements by normalizing to absolute cell count or colony-forming units (CFUs) instead of OD?

In order to compute the cell count in our samples, we used two orthogonal approaches:

A simple way to determine the number of cells in a sample of liquid media is to pour some out on a plate and see how many colonies grow on the plate. Since each colony begins as a single cell (for cells that do not stick together), we can determine how many live cells were in the volume of media that we plated out and obtain a cell concentration for our sample as a whole. We will have you determine the number of CFUs in positive and negative control samples in order to compute a conversion factor from absorbance to CFU.

By using these two approaches, we will be able to determine how much they agree with each other, and whether using one (or both) can help to reduce lab-to-lab variability in measurements.

Our team choose to follow the Plate Read and CFU Protocol. Following is what we do this year.

Before beginning our experiments, the following information is about our plate reader.

We used LUDOX CL-X (45% colloidal silica suspension) as a single point reference to obtain a conversion factor to transform our absorbance (Abs600) data from our plate reader into a comparable OD600 measurement as would cobe obtained in a spectrophotometer.

The following table is our measurement data of OD600 Reference point.

We prepared a dilution series of monodisperse silica microspheres and measure the Abs600 in our plate reader. The size and optical characteristics of these microspheres are similar to cells, and there is a known amount of particles per volume. This measurement will allow us to construct a standard curve of particle concentration which can be used to convert Abs600 measurements to an estimated number of cells.

❏ Obtain the tube labeled “Silica Beads” from the InterLab test kit and vortex vigorously for 30 seconds. NOTE: Microspheres should NOT be stored at 0°C or below, as freezing affects the properties of the microspheres.
❏ Immediately pipet 96 μL microspheres into a 1.5 mL eppendorf tube
❏ Add 904 μL of ddH2O to the microspheres
❏ Vortex well. This is our Microsphere Stock Solution.

Prepare the serial dilution of Microspheres:

Accurate pipetting is essential. Serial dilutions will be performed across columns 1-11. COLUMN 12 MUST CONTAIN ddH2O ONLY. Initially you will setup the plate with the microsphere stock solution in column 1 and an equal volume of 1x ddH2O in columns 2 to 12. You will perform a serial dilution by consecutively transferring 100 μl from column to column with good mixing.

The following table is our measurement data of particle standard curve.

Prepare the serial dilutions of fluorescein:

Accurate pipetting is essential. Serial dilutions will be performed across columns 1-11. COLUMN 12 MUST CONTAIN PBS BUFFER ONLY. Initially you will setup the plate with the fluorescein stock in column 1 and an equal volume of 1xPBS in columns 2 to 12. You will perform a serial dilution by consecutively transferring 100 μl from column to column with good mixing.

The following table is our measurement data of fluorescein standard curve.

We used E. coli K-12 DH5-alpha for our cell measurement as other teams were required. For all of these cell measurements, we used the same plates and volumes that we used in our calibration protocol. We also used the same settings (e.g., filters or excitation and emission wavelengths) that we used in our calibration measurements. These settings guaranteed the consistency and repeatability of our experiments.

Day 1: transform Escherichia coli DH5α with these following plasmids (all in pSB1C3):

Day 2: Pick 2 colonies from each of the transformation plates and inoculate in 5-10 mL LB medium +Chloramphenicol. Grow the cells overnight (16-18 hours) at 37°C and 220 rpm.

Day 3: Cell growth, sampling, and assay
◻ Make a 1:10 dilution of each overnight culture in LB+Chloramphenicol (0.5mL of culture into 4.5mL of LB+Chlor)
◻ Measure Abs600 of these 1:10 diluted cultures
◻ Record the data in your notebook
◻ Dilute the cultures further to a target Abs600 of 0.02 in a final volume of 12 ml LB medium + Chloramphenicol in 50 mL falcon tube (amber, or covered with foil to block light).
◻ Take 500 µL samples of the diluted cultures at 0 hours into 1.5 ml eppendorf tubes,
prior to incubation. (At each time point 0 hours and 6 hours, you will take a sample
from each of the 8 devices, two colonies per device, for a total of 16 eppendorf tubes
with 500 µL samples per time point, 32 samples total). Place the samples on ice.
◻ Incubate the remainder of the cultures at 37°C and 220 rpm for 6 hours.
◻ Take 500 µL samples of the cultures at 6 hours of incubation into 1.5 ml eppendorf
tubes. Place samples on ice.
◻ At the end of sampling point you need to measure your samples (Abs600 and
fluorescence measurement), see the below for details.
◻ Record data in your notebook
◻ Import data into Excel sheet provided (fluorescence measurement tab) 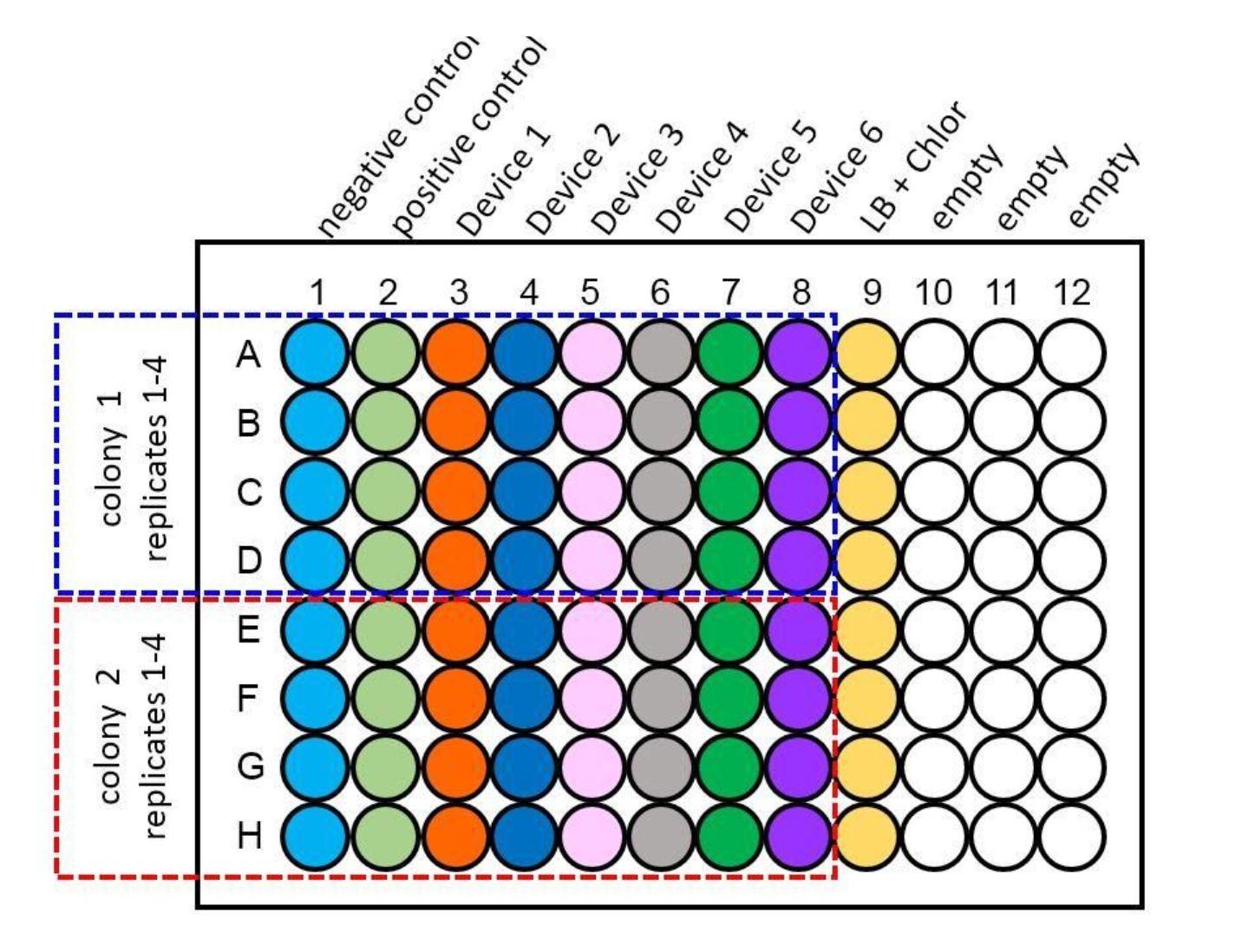 For the CFU protocol, we counted colonies for our two Positive Control (BBa_I20270) cultures and our two Negative Control (BBa_R0040) cultures. This procedure can be used to calibrate OD600 to colony forming unit (CFU) counts, which are directly relatable to the cell concentration of the culture, i.e. viable cell counts per mL. This protocol assumes that 1 bacterial cell will give rise to 1 colony

Step 1: Starting Sample Preparation
This protocol will result in CFU/mL for 0.1 OD600. Your overnight cultures will have a much higher OD600 and so this section
of the protocol, called “Starting Sample Preparation”, will give you the “Starting Sample” with a 0.1 OD600 measurement.
1. Measure the OD600 of your cell cultures, making sure to dilute to the linear detection range of your plate reader,
e.g. to 0.05 – 0.5 OD600 range. Include blank media (LB + Cam) as well.
2. Dilute your overnight culture to OD600 = 0.1 in 1mL of LB + Cam media. Do this in triplicate for each culture.
3. Check the OD600 and make sure it is 0.1 (minus the blank measurement).

Step 3: CFU/mL/OD Calculation Instructions
Based on the assumption that 1 bacterial cell gives rise to 1 colony, colony forming units (CFU) per 1mL of an OD600 = 0.1 culture
can be calculated as follows:
1. Count the colonies on each plate with fewer than 300 colonies.
2. Multiple the colony count by the Final Dilution Factor on each plate. 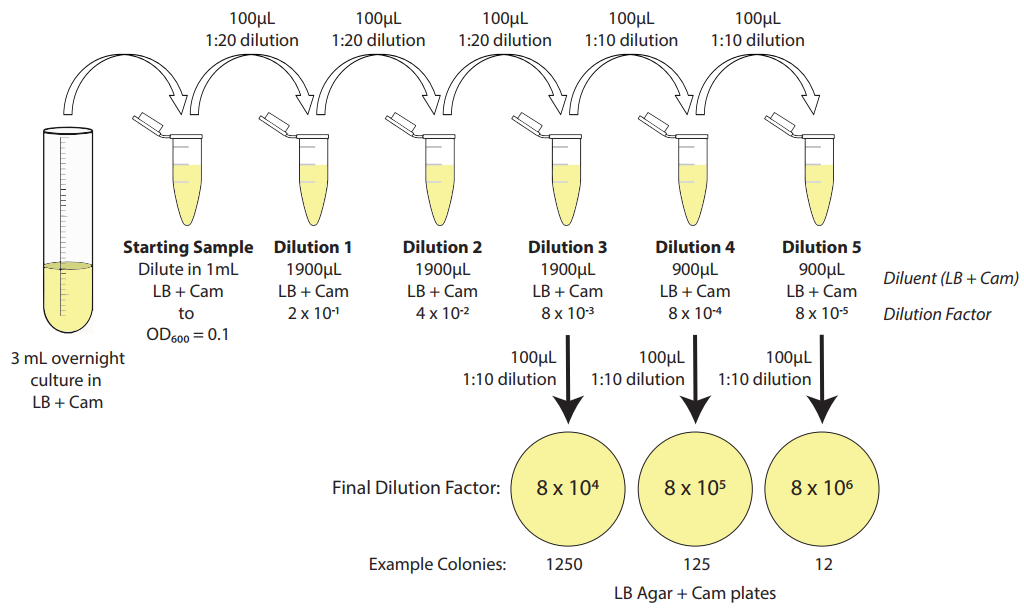 Using the data mentioned above to draw the figure3_1 and figure3_2 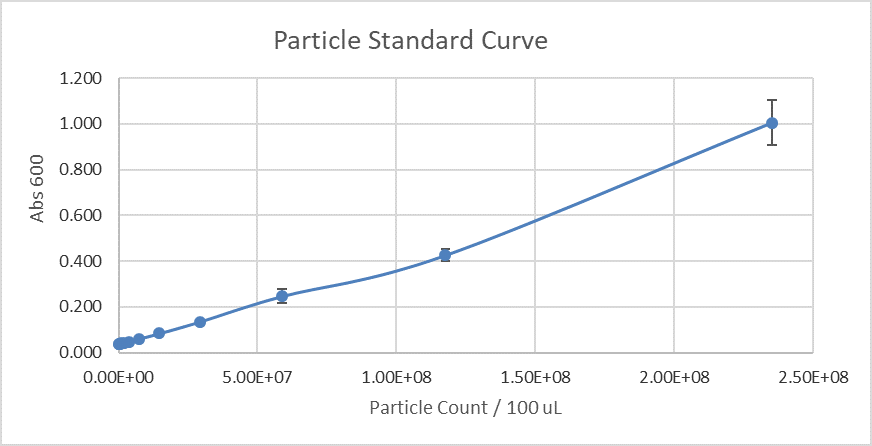 Using the data mentioned above to draw the figure3_3 and figure3_4 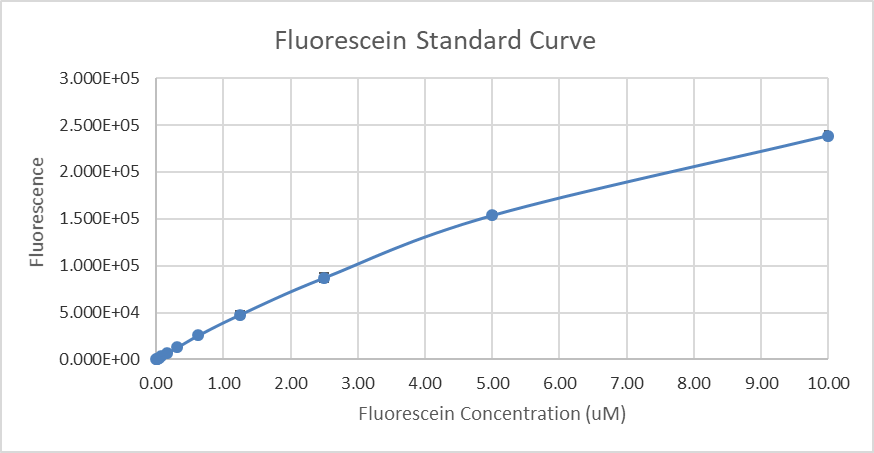 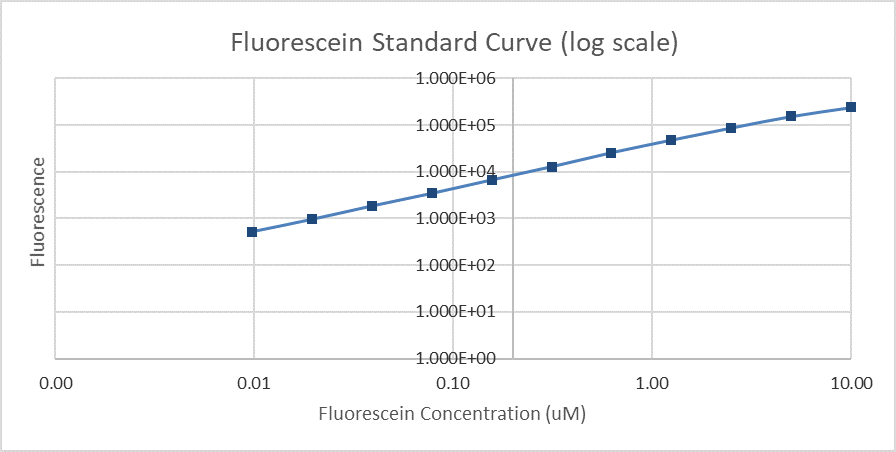 Using final dilution factor, we can calculate the CFU per 1 mL.

After finishing all these measurements, we upload our data on time. And our data has been accepted. We are very delighted that we have completed the work of interlab and got accepted. Hoping that our work can make some contributions to the future work of Interlab measurement study.