A gene gun, or a biolistic particle delivery system, is a device to transform cells with exogenous DNA using DNA-coated microparticles. Biolistics is a versatile and important method for genetic modification, yet a commercial gene gun costs between $10,000 and $30,000, making it difficult for some labs to afford.

This low-cost gene gun has proved to be functional through test fires on lettuce leaves, which had cells successfully transformed with GFP. We look forward to testing the gene gun with AFPs to see if it could transform lettuce to protect itself from bacterial biofilms. 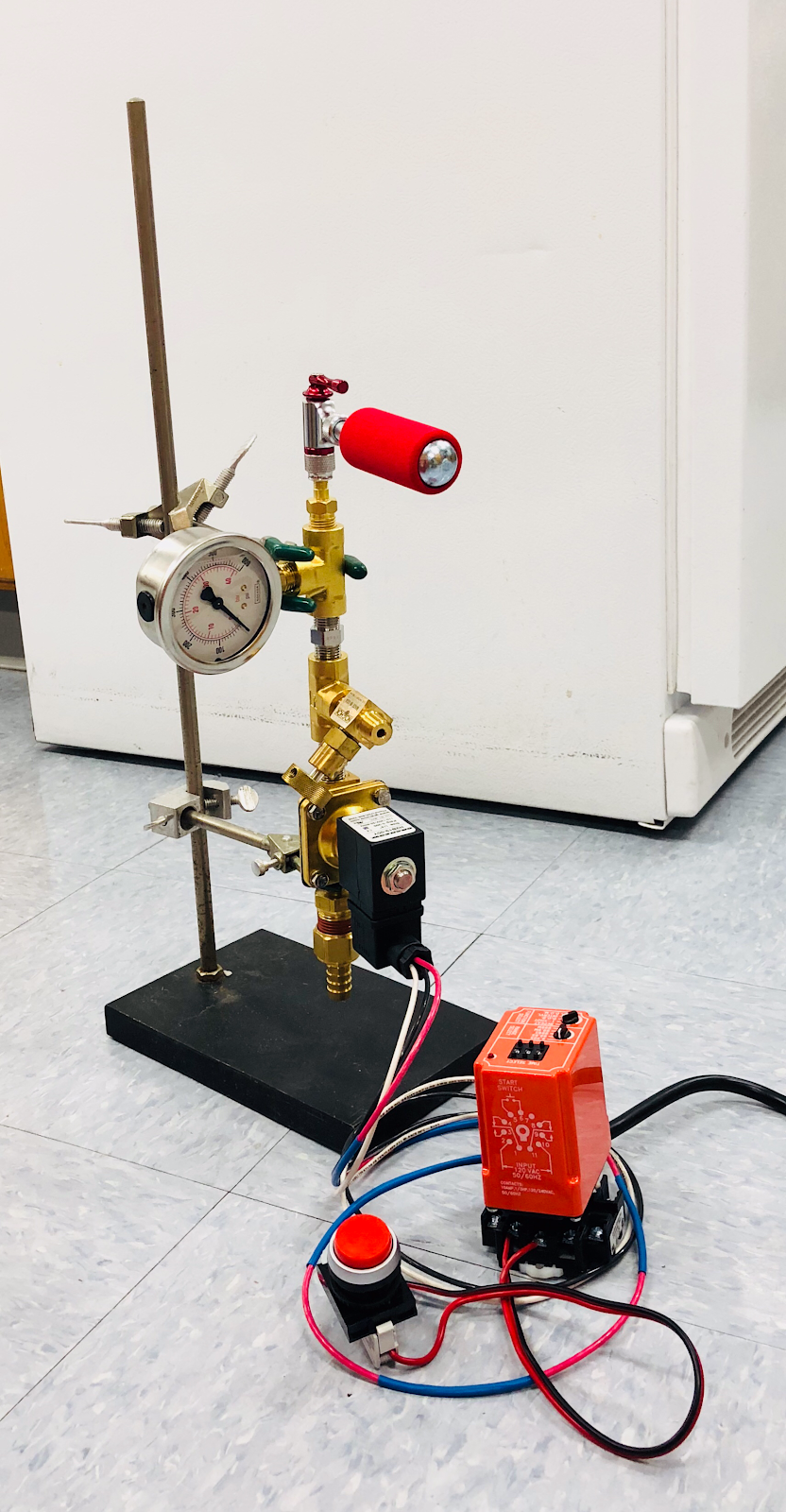 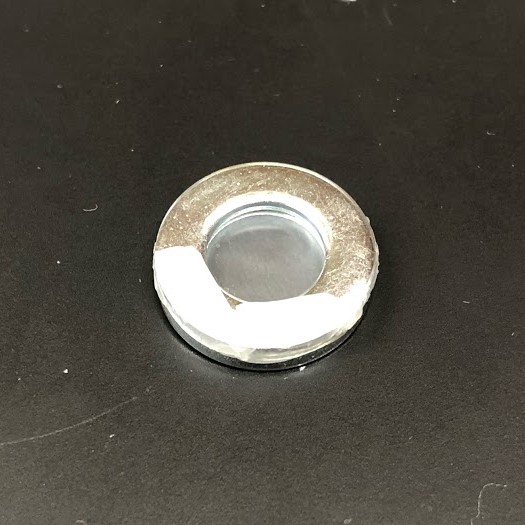 Image: macrocarrier made of washers and parafilm 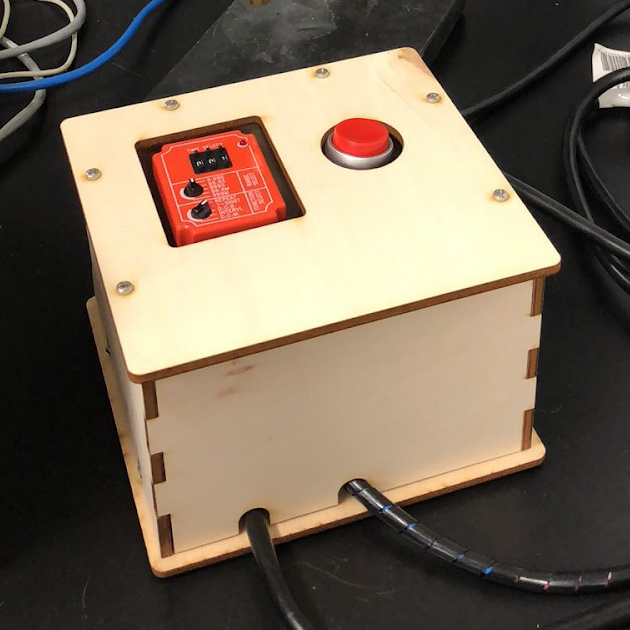 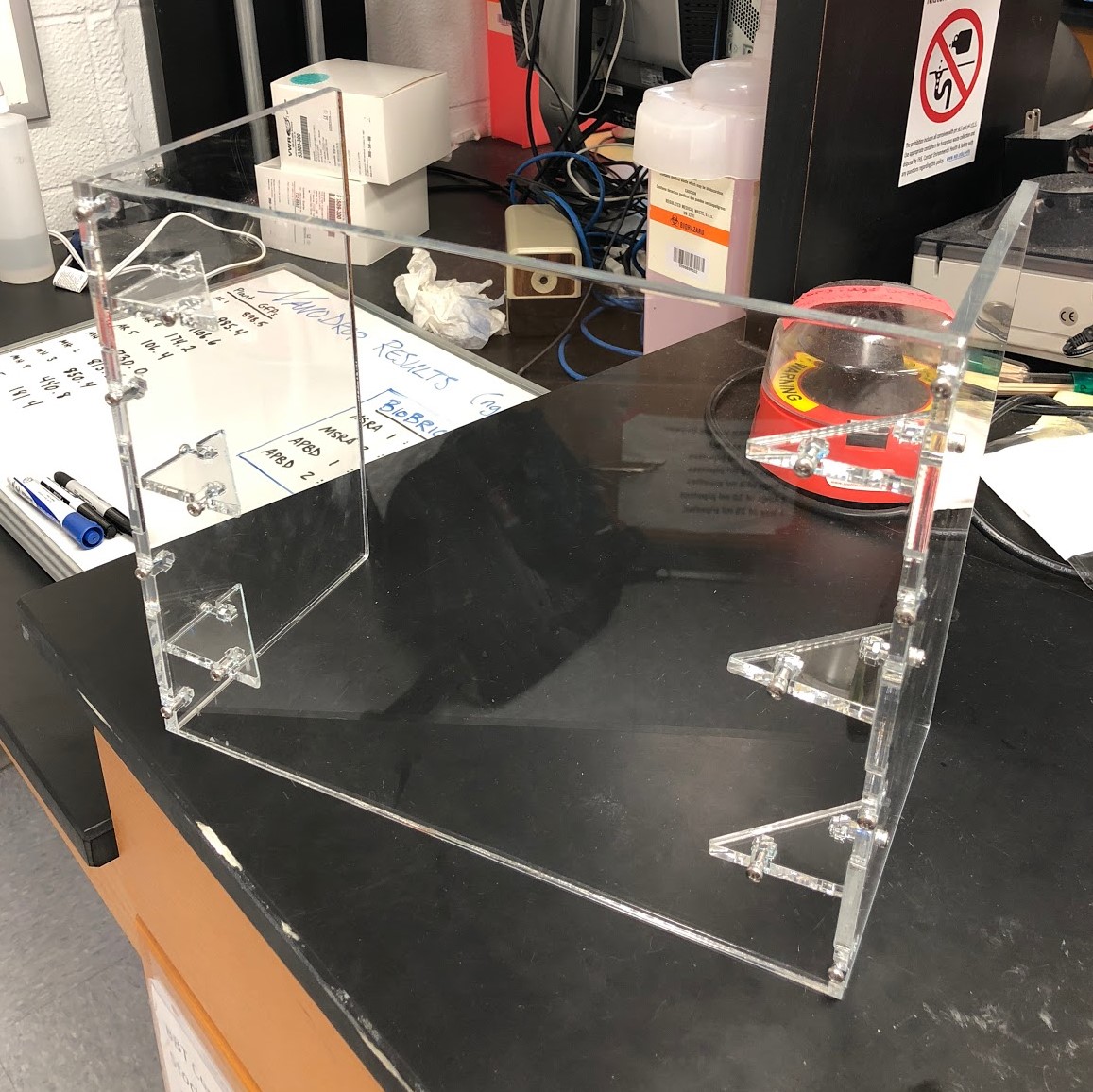 Our gene gun is largely based on the design of the iGEM 2016 University of Cambridge team, with some improvements and adjustments. 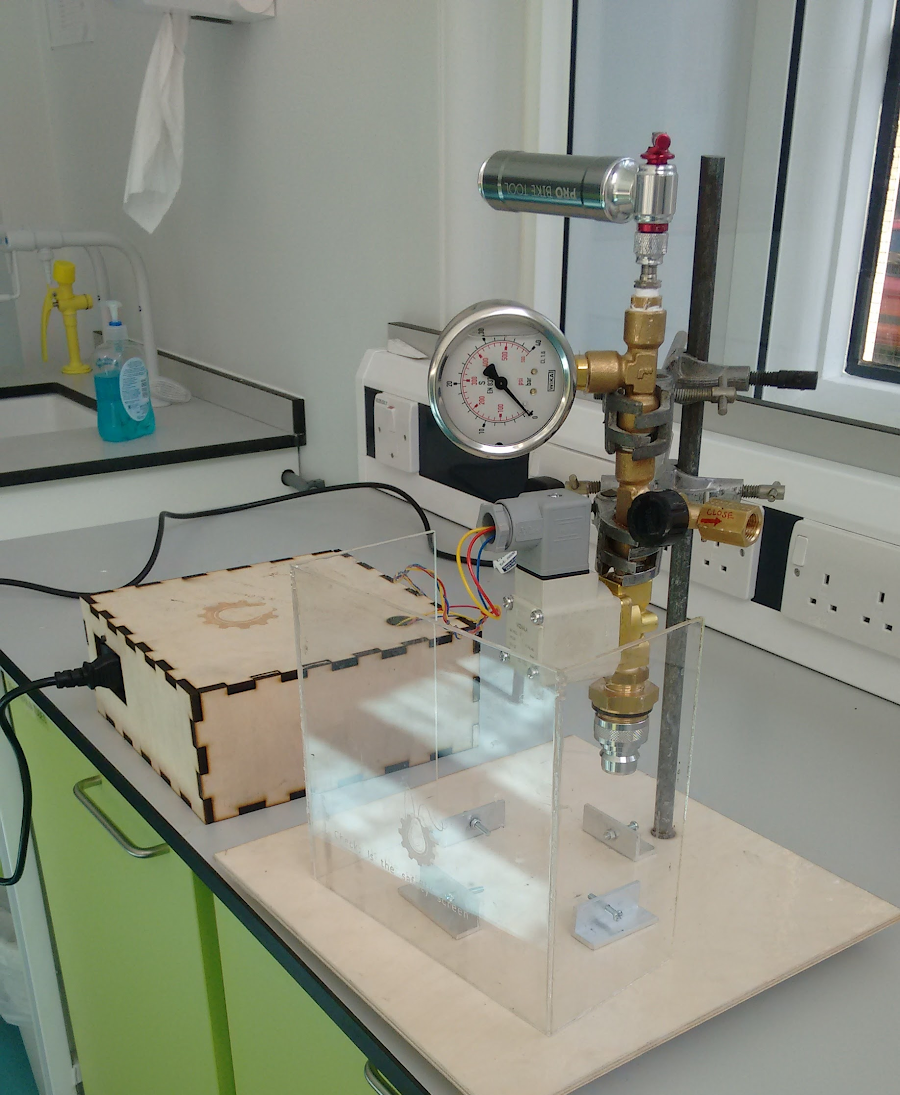 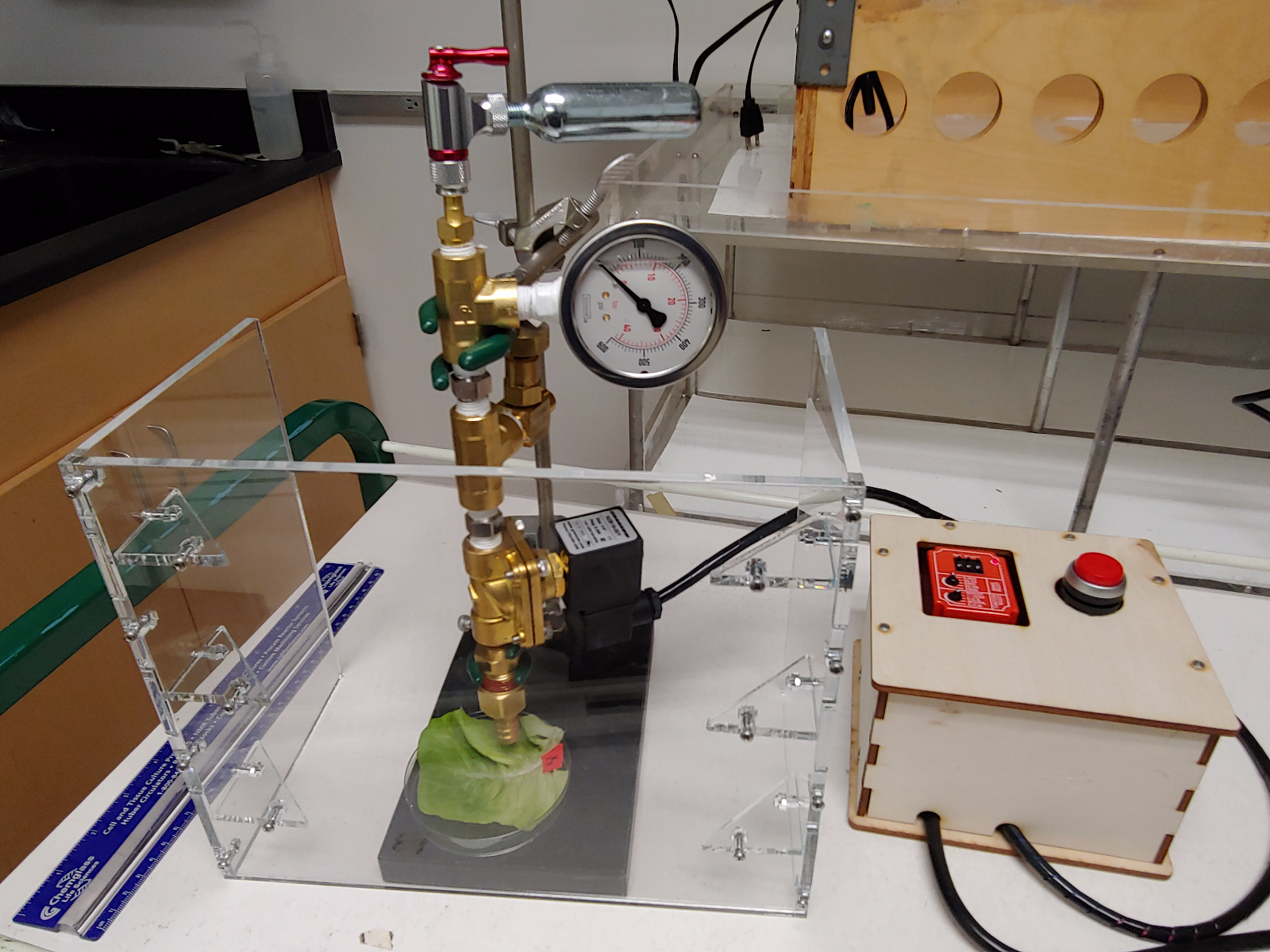 Images of our gene gun.

All parts in the previous design were also converted into standard American parts that could be easily purchased in the United States. A table of corresponding parts in the previous and current design can be downloaded through the following link: Part by Part Comparison between WPI 2018 and Cambridge 2016 Gene Guns (Microsoft Excel File)

We have also implemented a different method for testing functionality of the gene gun, which will be further explained in the following section.

Functionality of the gun was tested through transforming lettuce leaves with green fluorescent protein (GFP). The iGEM 2016 University of Cambridge team tested their gene gun with onion epidermal tissue to see if it could penetrate cell walls. They tested by shooting their biobrick part into algae, but didn’t confirm successful expression due to limited time. Here, our team provided a simpler test for functionality of the gene gun, which could yield results in a few days. Our test also proves that the gene gun could successfully transform plants other than onions.

For firing the gene gun, the team used 0.6 micrometer gold particles coated with a plasmid containing binary plant vector expressing GFP and GUS, both driven by a 35S promoter (link to the vector used). 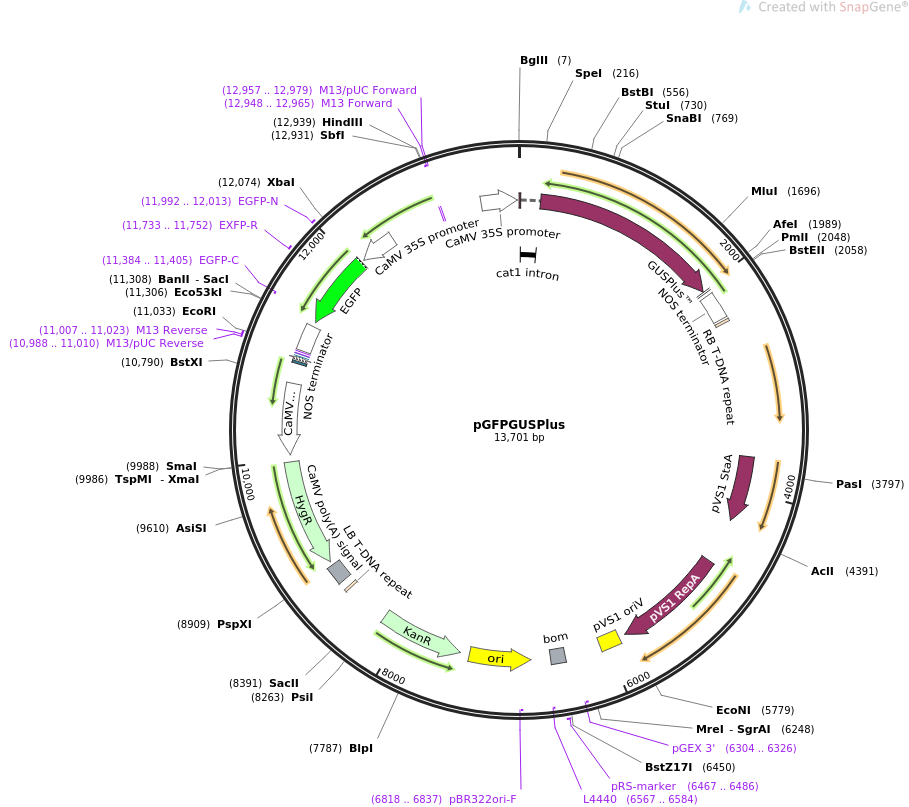 For comparison of functionality between the low cost gene gun and a commercial gene gun, the team fired using both the low-cost gene gun and a common commercial gene gun available at the school biology department, the Biolistic PDS-1000/He Particle Delivery System. Directions on how to operate the PDS-1000/He system and how to prepare the microcarriers can be found through the following link: Protocol for Preparing Microcarriers for Plasmid Delivery (PDF)

The team tested with two different types of lettuce: butterhead and romaine. Butterhead was chosen because of the uniformity and strength of its leaves and involvement with the biofilm formation test. Romaine lettuce was chosen because they are a more common type of lettuce on the market and part of the inspiration for our project. The team picked fresh leaves from the lettuce of roughly 100 square centimeters, then washed and labeled the leaves. 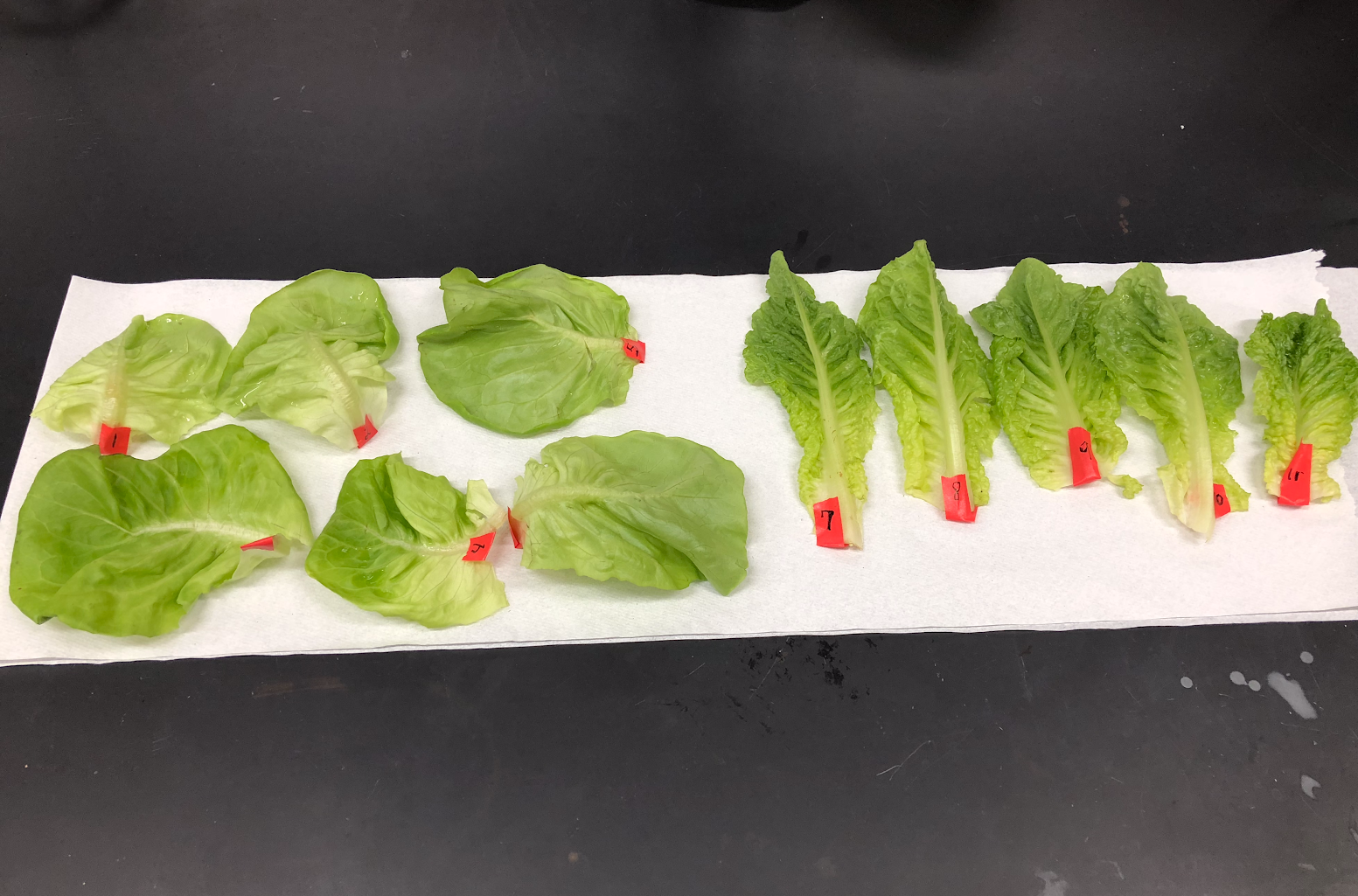 The bombarded leaves were then covered with wet paper towel to stop them from drying out. Lettuce leaves were stored at room temperature for the first two days and then in the fridge for one day.

Fluoresence was checked under a fluorescence microscope (SteREO Discovery.V12 microscope). Since injured parts of the leaves could also fluoresce under the microscope, the team checked for specific spots on the lettuce leaves that fluoresces under the filter EGFP 480 but not DSRED to make sure the fluorescence is generated by expressed GFP.

Fluorescence of the leaves were checked 24, 48, and 72 hours after the bombardments. 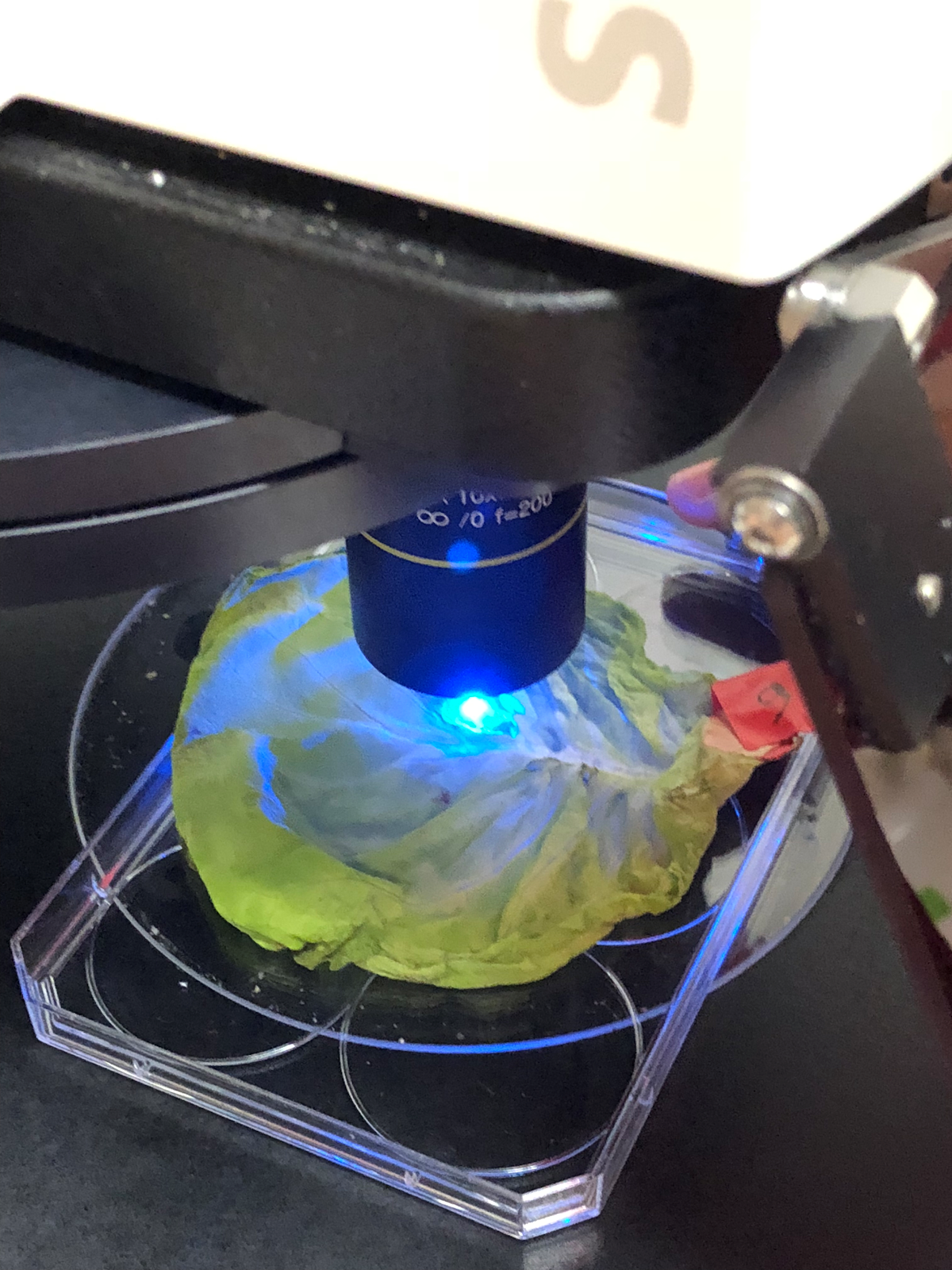 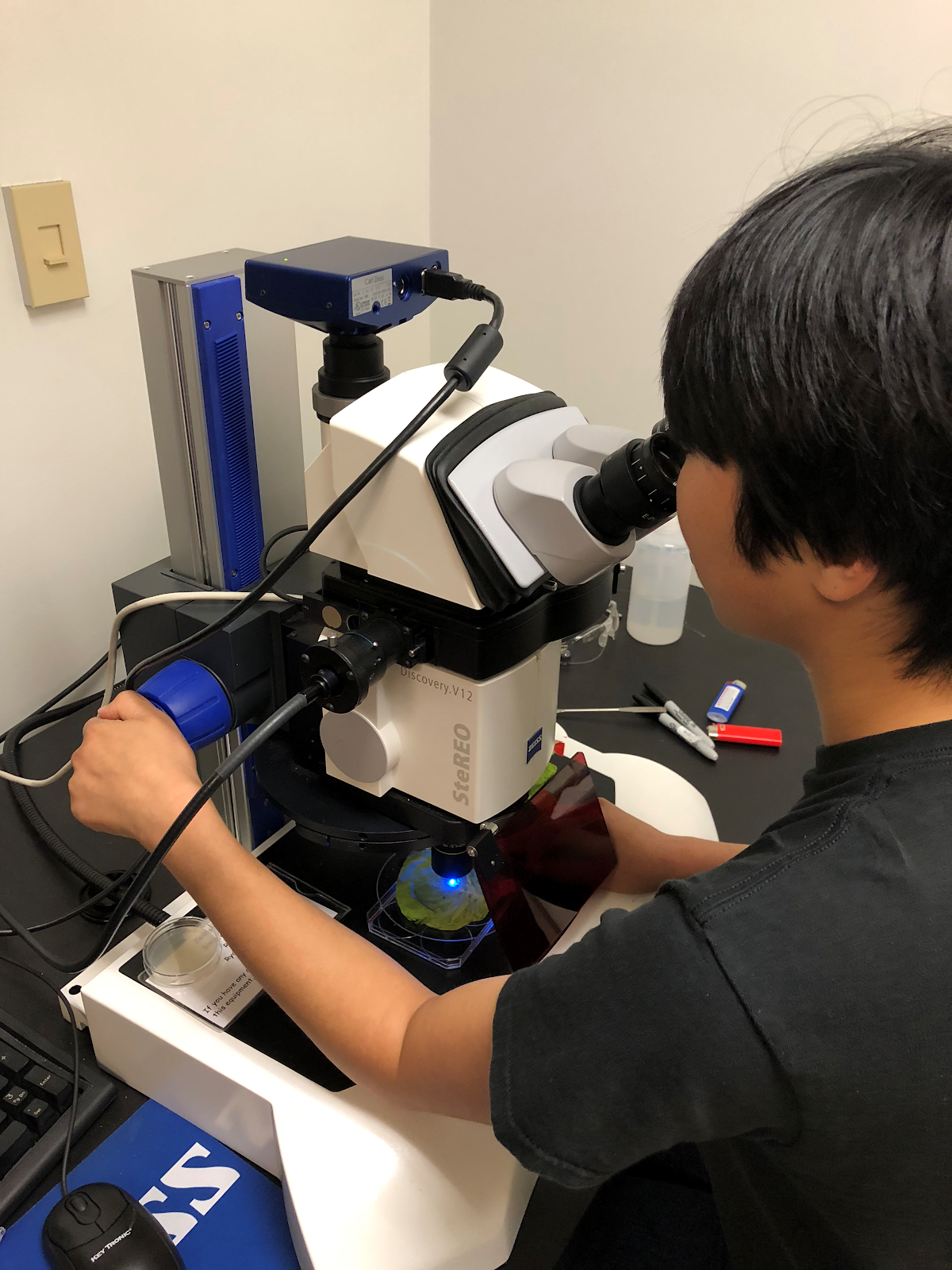 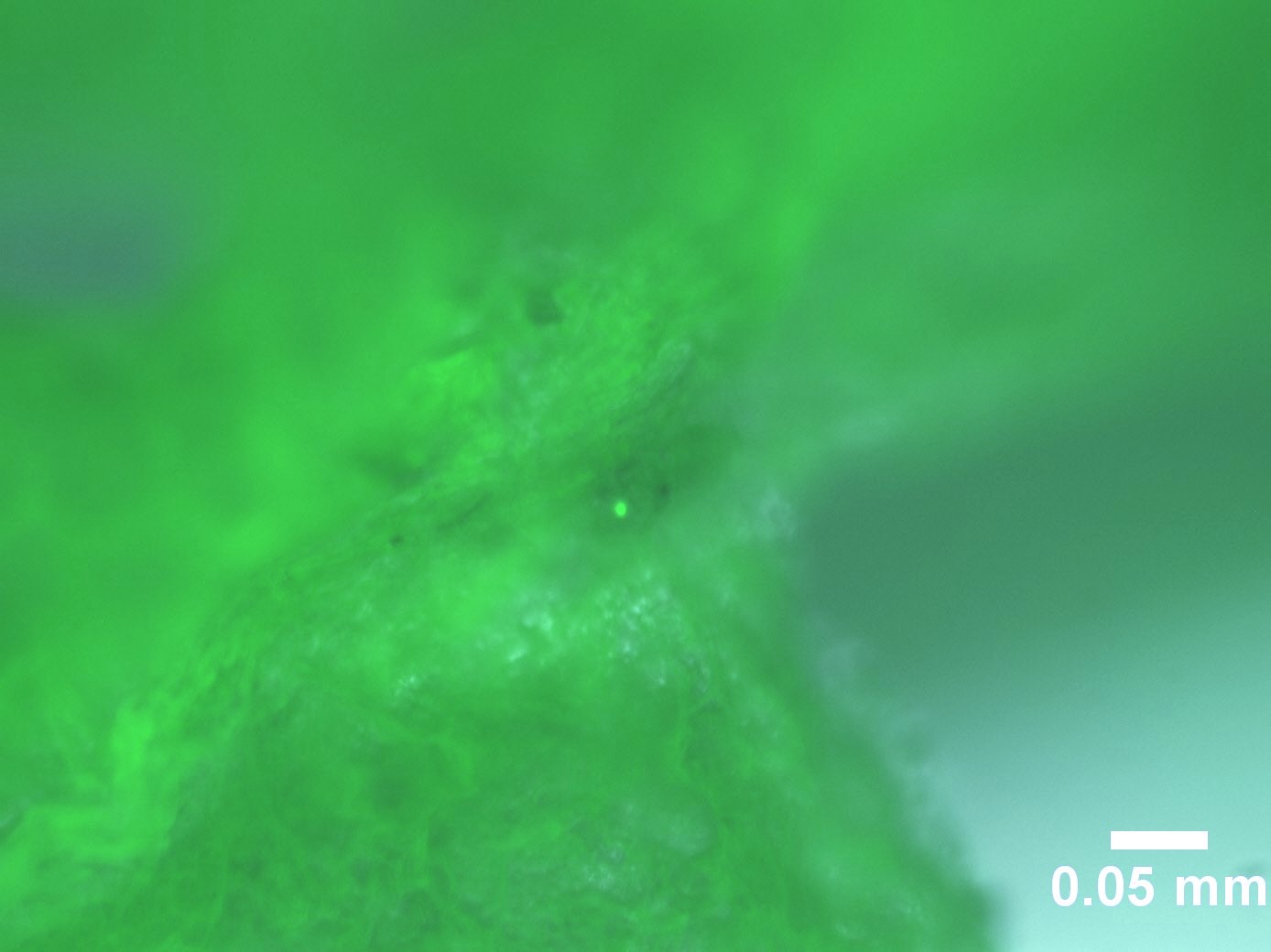 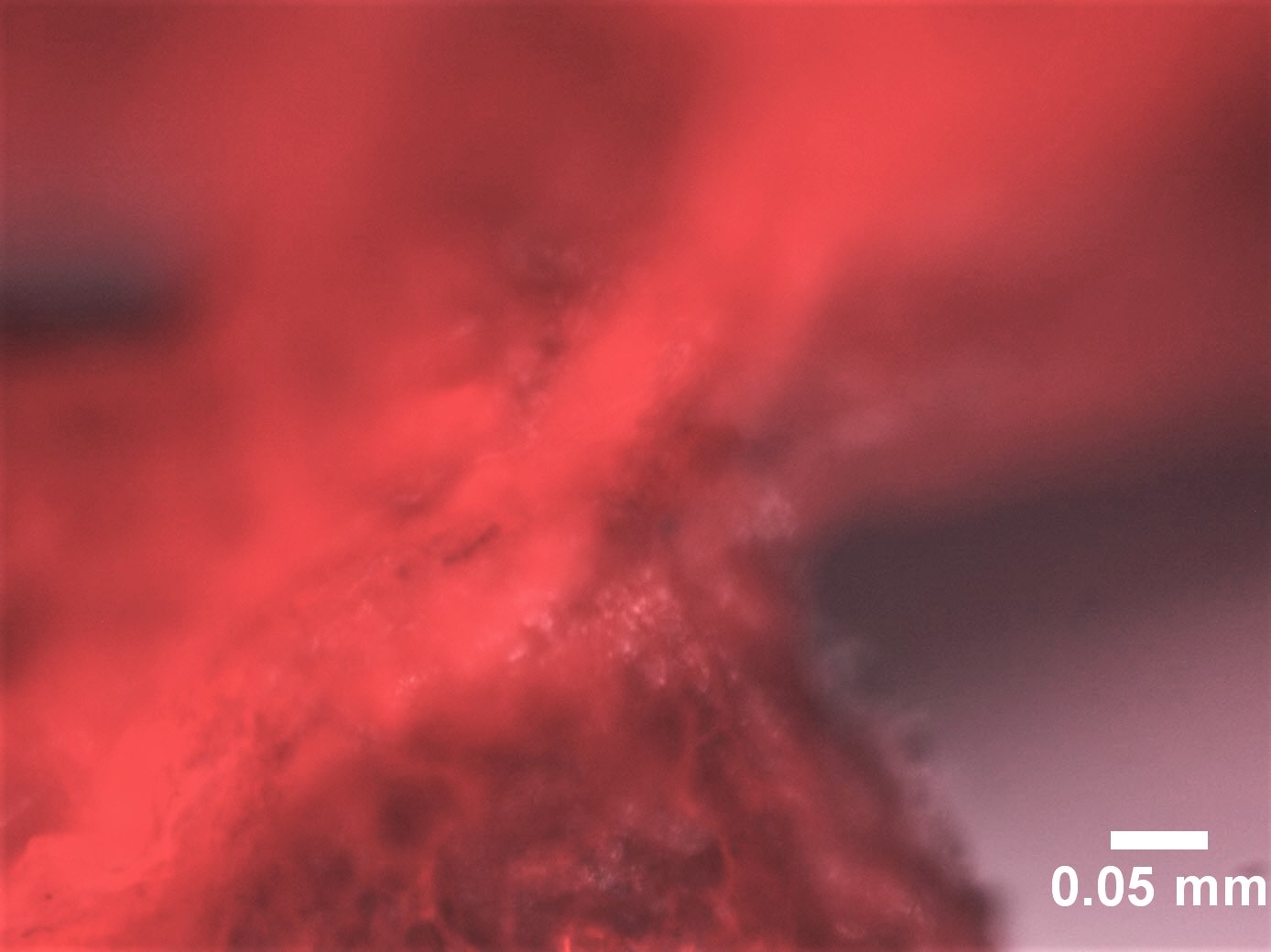 Figure. cell fluorescing under microscope (left or above: EGFP 480, right or below: DSRED)

Evidence of expressed GFP on lettuce leaves was found 72 hours after the bombardments. The leaf found to be expressing GFP was leaf number 4, which was transformed using the low-cost gene gun at pressure of 300 psi and height of 2 cm. Several spots on the leaf was found to be fluorescing under EGFP 480 but not DSRED, which confirms expression of GFP.

The previous pictures shows one of the cells that was transformed by the gene gun. In the middle of the image a cell is fluorescing under the GFP channel (EGFP 480, picture to the left or above) but not RFP channel (DSRED, picture to the right or below). Since parts of the lettuce leaf that are autofluorescent will be fluorescent under both channels, but the fluorescence generated by GFP will only be fluorescent under the GFP channel, behavior of this cell confirms expression of GFP.

Though proven to be functional, various features of the gene gun could still be improved. Currently when the low-cost gene gun is fired at a lettuce leaf, it tends to rupture a hole at where the particle is fired due to high flow speed of air. Further improvements on securing the target could be developed to prevent this from happening.

Ideal firing conditions also need to be further specified, though this may depend on the specific types of target. More tests also need to be carried out to replicate the current results. A more efficient way of confirming expression could also be developed.

The reason for the creation of the gene gun was to be able to transform leaves with AFPs to determine whether the plant could produce AFPs to protect itself from human pathogens that form biofilms. This is still a line of research open to testing.

A list of materials needed for building the gene gun can be downloaded through this link: WPI iGEM 2018 Gene Gun Parts List (Microsoft Excel File)

Laser Cut Plan for the Box and Shield (Zipped Folder) 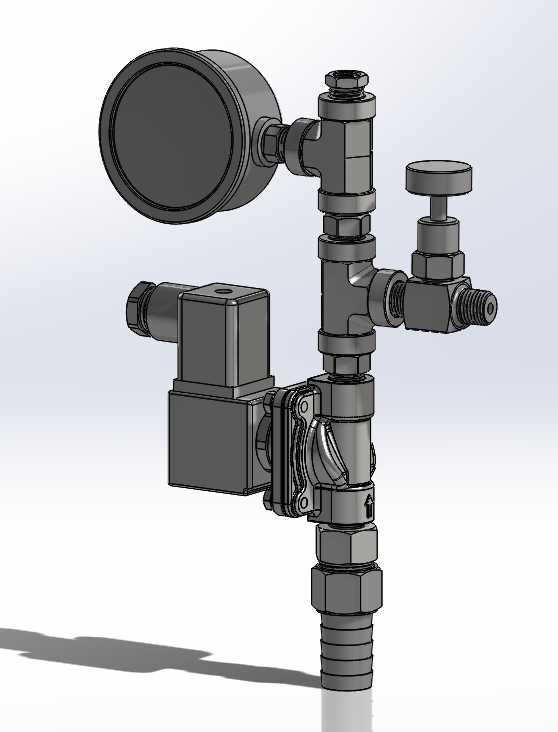 Remove CO2 cartridge and pump to avoid accidental pressure increase in the body of the gun, or open needle valve. The shield and box can be taken apart for storage if needed.

Wernick, Jay Hanson, Kyle Taylor, Arnie. (2016). How to build and use a gene gun. Retrieved from https://www.oreilly.com/ideas/how-to-build-and-use-a-gene-gun