Different strains of E. coli and Staphylococcus (S. aureus, and S. epidermidis) were grown at different temperatures and for different durations to determine ideal incubation conditions for our experiments. DH5α was chosen as a negative control, which it successively showed itself as. As can be seen, of all of the strains, NCTC had the most pronounced growth, with the 72 hr, 37°C condition. However, it has the largest error bars among all strains measured, so its magnitude of growth is suspect. Additionally, with S. epidermidis too, overlap in the error bars with the comparable 48 hr, 37°C condition, also questions the statistical significance between growing bacteria at these two conditions. Excluding the negative control, the amount of biofilm produced were inconsistent between strains, which likely means optimal growing conditions depend on the bacterium species in question, given that all are known to produce biofilms. For our trials, 48 hours at 37°C was concluded to be the optimal growing conditions due to the visible distinction between strains while also keeping the time it takes to perform one trial short.

His-tag purification was conducted to purify antifreeze proteins (IA and Ze) and green fluorescent protein (GFP) from BL21 strains of E. coli. These strains produce a larger quantity of proteins. They were activated using IPTG (a mimic of a metabolite of lactose that triggers the lac operon) to produce more protein. The antifreeze proteins and GFP contain histadine, and therefore bind to components of the purification, allowing other parts of the E. coli cells to be removed. Two of five clones for both IA and Ze AFPs were used and the proteins purified. For IA, clones 4 and 5 were used (labelled IA4 and IA5) and for Ze, clones 1 and 4 were used (labelled Ze1 and Ze4).

Samples from the eluate of the protein purification were compared with bovine serum albumin (BSA) on a protein assay to quantify the concentration of protein recovered from purification. The graph shows that the purification yielded between 0.42 and 0.54 mg/ml of protein.

Purified GFP can be found in well 4 of the first gel. It is around the expected size of GFP, which is 27 kDa. Therefore, it is likely that GFP was purified in this sample. Purified IA4 is seen in well 8 of the first gel, while IA5 can be seen in well 4 of the second gel. Both eluate samples of IA are around 24 kDa, when compared to the ladders in the samples. This is the expected size when compared to literature. Lastly, purified Ze1 can be seen in lane 8 of the second gel and Ze4 can be seen in lane 5 of the third gel. These are the smallest, around 14 kDa, and fall toward the bottom of the gel. Something to note is that there is a band that is present in all gels. It is a non-specific band that seems to not have been purified out using his-tag purification. It is possible that this could contribute to future results of our assays. Future work would require a second round of purification to eliminate this band of proteins before running our assays.

The first graph shows the amount of biofilm produced in DH5𝛼, EMG, NCTC, S. epidermidis, and S. aureus with IA4, IA5, Ze1, Ze4, or GFP coating the well plate. When comparing the red no protein bar to every other bar, most proteins seem to show a reduction in biofilm formation in these trials. This occurs in every strain except for EMG, which shows an increase in biofilm formation. This is likely due to EMG responding quickly to stress, which is what induces biofilm formation to begin with (Kostakioti, 2013).

The second graph shows the amount of biofilm produced in DH5𝛼, EMG, NCTC, S. epidermidis, and S. aureus with IA4, IA5, Ze1, Ze4, or GFP mixed into the bacteria that was then added to the well plate. When comparing the red no protein bar to every other bar, most proteins seem to show a reduction in biofilm formation in these trials. Similar to the coated plates, this occurs in every strain except for EMG. However, with this method of protein application, the difference is not so dramatic, and the EMG samples with protein mixed in have similar levels of biofilm those which had no protein.

The addition of AFPs or GFP seem to have an impact on the formation of biofilm in all strains that were tested. It is possible that any trends seen in this data could be due to the nonspecific band present during the protein purification protocol. 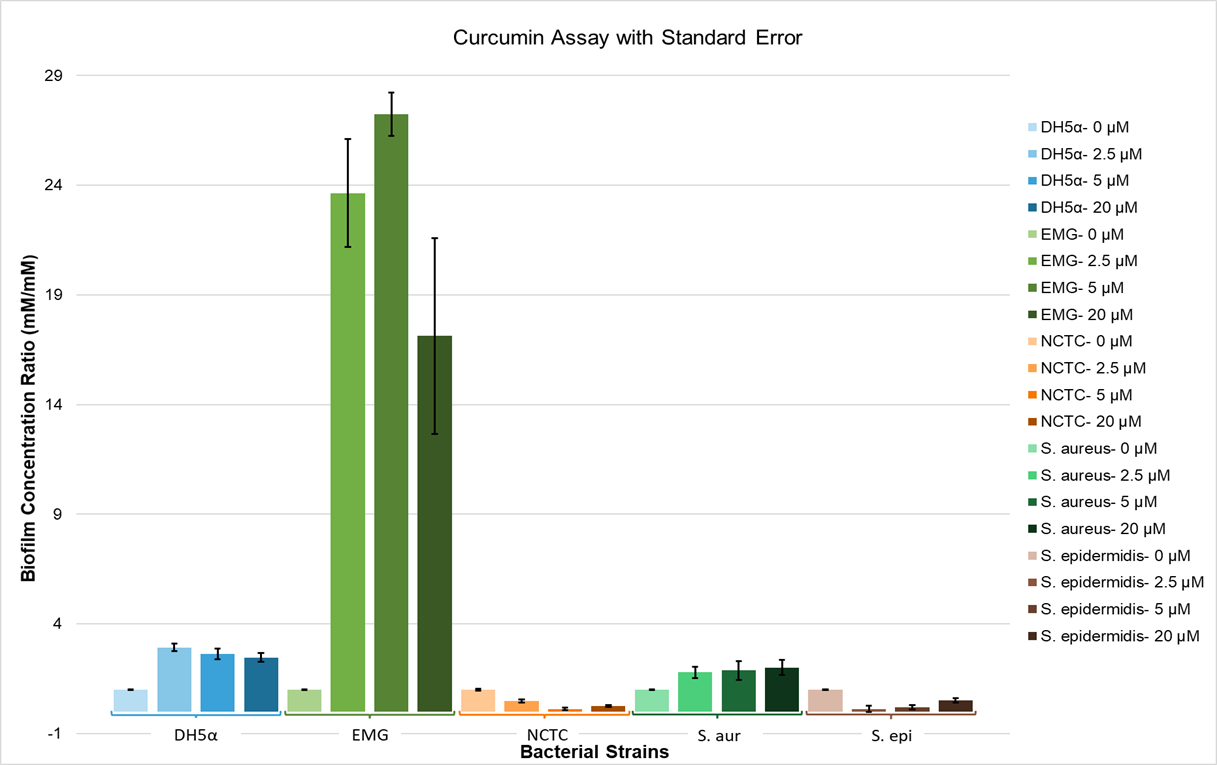 All five strains, DH5𝛼, EMG, NCTC, S. epidermidis, and S. aureus, were mixed with the specified amounts of curcumin. As can be seen, the EMG strain had the most pronounced biofilm development. While DH5α had an apparent drop in biofilm development, it like S. epidermidis and S. aureus showed an increase in biofilm growth. NCTC similarly shows an initial drop but an uptick in measured biofilm after 20 µM curcumin solution was applied. However, the overlap between error bars in these four aforementioned strains among ratios means overall measurements may be suspect.

Curcumin’s antibacterial ability against different strains of bacteria was assessed. To see if it had a blanket response among different bacterial species was an objective of this study. Observing the data, particularly the mismatch in drops and increases in biofilm measurement a few reasons for this occurrence arises. The most likely is that there are simply differences in how individual strains of bacteria react to stress. When placed under taxing, harsh conditions nonideal for development, some bacteria form biofilm (Kostakioti, 2013). Curcumin, posited in the literature to kill bacteria, may have proven so harsh for bacteria with membrane deconstructing mechanism that cells went into biofilm development to endure, explaining the increase in biofilm detected in S. aureus for example. Another reason may concern the measurement technique used. While great care was taken to be consistent among all assayed plates in all trials, there was no standardization in the initial wash step of the plates to apply the crystal violet stain, which, on those occasions the water was applied for longer than needed, removing the biofilm, thus skewing data.

Future extensions of this project could involve running this experiment once more with the aforementioned issues addressed and remedied. Moreover, discerning a scalable method conducive for industrial production of curcumin from synthetic bacteria (like what is executed currently with insulin) may prove insightful and provide for a case study for a new industry of standardized herbal biologics. If desired, the genes comprising the mechanism of curcumin could be spliced into plant genomes to have the plants produce curcumin themselves.

As with previous work, five strains of bacteria (DH5𝛼, EMG, NCTC, S. epidermidis, and S. aureus) were tested for biofilm growth at 37°C for 48 hours. The amount of surviving bacteria were measured instead of the amount of extracellular polymeric substance produced. There are differences seen between this data and that from the crystal violet biofilm assays, most notably the growth of S. aureus and the lack of growth of EMG. This further indicates that different strains have different optimal growing conditions. There is also a wide range of standard error, which may be reduced by a lesser dilution before plating on plain LB agar plates and also further standardizing the inoculation of the lettuce leaves.

Further research includes remedying standard error through more even spreading of inoculation media and utilizing a lesser dilution. Ten times what is currently being performed is a recommended starting point (1 to 20,000 instead of 1 to 200,000). Once this is accomplished, trials should be performed with live plants and day and night cycles simulated through temperature and light change.

The low-cost gene gun built by the team was proven to be functional with GFP reporter system. For details on the results, please see the hardware page.

Biofilm assay plates made from transformed cultures of IaAFP, ZeAFP, GFP, Empty psB1C3 plasmid in EMG competent cells. The goal was to induce the various AFPs in bacteria that are known to form biofilms. This was tested on biofilm assay plates containing a sample of each protein with and without arabinose. The results from the biofilm assay plates show that the samples induced with arabinose produced less biofilm when compared to the same protein sample not induced with arabinose. This is because the arabinose binds to the AraC protein and turns on the operon that triggers the expression of the AFPs. 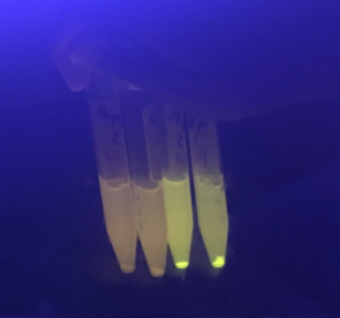 We achieved a lot over the course of our project, but encountered many challenges along the way. Because of this, there is a lot of potential for future work.