Cancer is an upsetting disease that we can’t cure for now but is constantly trying our best to intervene. For gastric caner, it is a leading cause of cancer deaths worldwide.In early stage of disease progression, it is often mistaken as other gastric disease such as gastritis and gastrohelcosis due to their similar symptoms, plus people’s poor awareness to prevent, once diagnosed, patients already have advanced gastric cancer. In China, it ranked No.1 among all types of cancers in some rural areas, the mortality of which account for nearly 50% of worldwide level.What’s more, the incidence of gastric cancer in Wuwei, Gansu ranks as the first in China, and we feel the urge to popularize the knowledge of gastric cancer prevention to villagers to lower their potential of getting gastric caner. People always turn to traditional therapies for treatment like surgery, radiotherapy and chemotherapy, but it causes too much harm to patients, thus lowering their quality of lives. There are also some brand new therapies such as immunotherapy and biotherapy, but we can’t neglect problems such as off-target effect and cytokine storm.To tackle this issue, we designed a new therapy based on synthetic biology. Here we would like to illustrate with vivid comic strips.

Mr.C (gastric cancer) is a criminal with high risk of attacking normal tissues. Mr.T (tumor infiltrating lymphocyte) is a responsible police who tries to arrest Mr.C. Though he can detect the existence of criminals (due to specific receptors on the membrane of lymphocytes), he is unable to finish this tough task.So...Here comes the transporter Mr.E (exosomes)! Mr.E, really a helper, transports three weapons to cancer cells, they are gun, bloodhound, and spontoon. Considering that TIL cells don’t secret enough exosomes under normal condition, we fuse three genes (STEAP3,SDC4 and nadB) to increase the number of exosomes. Also, to find out which kind of weapon can best assist Ms.T to arrest cancer cells, we give Mr.T different weapons under different inducers. Induced by tetracycline,we give Mr.T a gun (miR-135b-3p). Induced by biotin, we give Mr.T a bloodhound (miR-769-5p), there are regulator and response vector that can regulate the activation of BS-Biotin-On system in a more delicate way. Induced by galactose, we give Mr.T a spontoon (miR-942-5p). 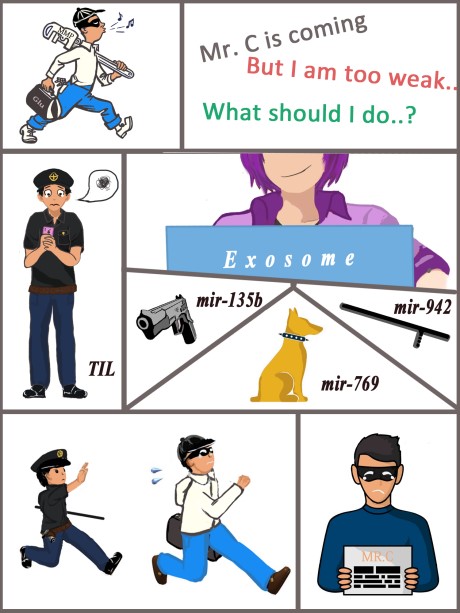 Finally, we fuse exosome booster module and three miRNA module into one plasmid.

Here is the whole vision of our hypothesis:

We extract TIL cells from patients’ cancer cells and transfect with exosome booster and miRNA module, then we inject the engineered TIL cells into patients’ body. The TIL cells can target tumor mass where cancer cells locate and come into play. Cancer cells’ ability of uptaking exosomes is greatly increased in tumor microenvironment due to an acidic environment. Also, cancers have type-specific mutations or protein alterations that result in increased exosomal uptake. When TIL cells get close to cancer cells, they sense the hypoxia condition and HIF-1 are produced, they combine HRE (hypoxia response elements, we quintuple HRE to ensure the robustness of promoters) and then activate minimized CMV promoter, thus promoting the expression of exosomes. By adding different inducers, TIL cells will start expressing different concentrations of miRNA. Exosomes can encapsule miRNA automatically and send them to cancer cells. Cancer cell can uptake them at an increased speed. By adding different combination of inducers, we can explore whether the summary effect of miRNA is better than the effect of single miRNA, thus finding out the best way to suppress tumor activity. 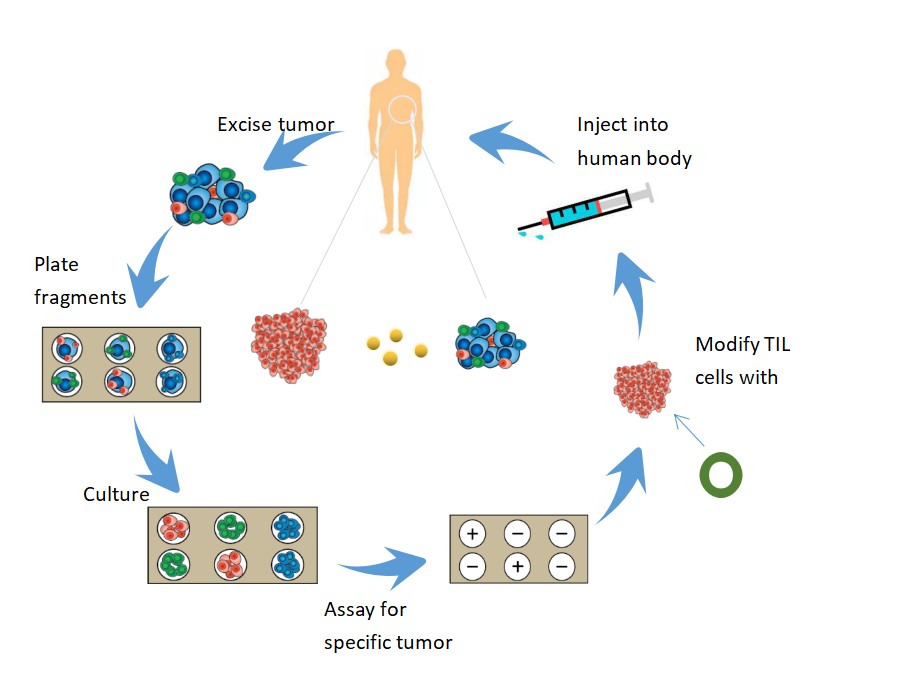 What is TIL cells?

TIL (tumor infiltrating lymphocytes) are special immune T-cell population locate in tumor mass, they have tumor specific antigen but can not play the role of killing tumor cells limited by CD4+CD25+ Treg cells.

They are nanoparticles that can mediate intracellular communication by carrying RNA, DNA, and proteins. They can derive from membrane of donor cells (TIL cells) and can mix with recipient cells (cancer cells). 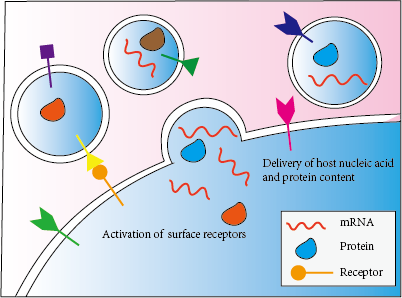 How these three genes boost the production of exosomes?

They combine with each other to boost exosomal transfer efficiency .

How do we screen weapons?

We download patients’ tissue sequencing data and clinical data with gastric cancer from TCGA database, and use R language to conduct survival analysis.We find that the survival index of microRNA（a）135b-3p (b)769-5p (c) 942-5p can reach -0.294 (anything below -0.15 indicate inhibiting effect on digestive tumors). We then use TargetScan and starBase to predict the miRNA’s target genes, some downstream genes are highly related to the metastasis and proliferation of tumor cells. From the survival regression curve(See Fig.1),we can know that low expression of three genes are correlated with poor survival prognosis.
Additionally, we verified the correlation in a series of cellular function experiments such as CCK8 (test cell proliferation), scratch assay (test cell invasion) and flow cytometry (test cell cycle), we verified that high expression of mi-135b-3p can inhibit the proliferation, invasion of cancer cells (Poorly differentiated gastric cancer epithelial cells MKN45, moderately differentiated gastric cancer epithelial cells SGC 7901 and highly differentiated gastric cancer epithelial cells MKN28).Also it causes cell cycle arrest.

MicroRNAs (miRNAs) are a series of endogenous non-coding RNA with regulatory functions found in eukaryotes, with a size of about 20~25 nucleotides. Mature miRNAs are generated by long primary transcripts through a series of nuclease shear processing, which are then assembled into RNA-induced silencing complexes(RISC), which identify target mRNA by complementary base pairing, and guide RISC to degrade target mRNA or inhibit the translation of target mRNA, thus influencing the function of cells.

How miRNA plays the role of anti-tumor drugs in gastric cancer?

There are many researches suggesting that miRNA acting as a “switch” to some key genes in the development of gastric cancer, whose inactivation and over expression can greatly regulate expression level of critical molecular such as P53, MMP2, SMAD2 and etc.

In solid tuumors, rapid proliferation of tumor cells leads to increased oxygen consumption of tumor cells, which in turn leads to hypoxia microenviroment. Hypoxia is one of the basic characteristics of tumor microenvironment, playing an important role in the proliferation, invasion and metastasis of tumor cells. We construct a promoter (5HRE-PminCMV promoter) which can be activated under the condition of hypoxia, that’s to say, if we transfect 293T cells with a plasmid activated by 5HRE-PminCMV, they can express downstream genes when sensing hypoxia environment of tumors.
First we fuse the promoter with enhancing green fluorescent protein (EGFP) to test the efficiency and effectiveness of HRE (hypoxia response element), then we connect exosome booster module with promoter to give play to its anti-tumor activity.

We constructed a fusion protein of biotin ligase from Bacillus subtilis (BS-BirA) and the trans-activation domain, and used its expression vector as the regulatory vector. Meanwhile, BS-BirA-specific operators were ligated upstream of attenuated CMV promoter to obtain the response vector. In this way, a novel eukaryotic gene regulation system responsive to biotin was established and named BS-Biotin-On system. BS-Biotin-On system was further investigated with the EGFP as the reporter gene, and that the expression of interest gene could be tuned in a rapid and efficient manner by changing the biotin concentrations in the cultures.