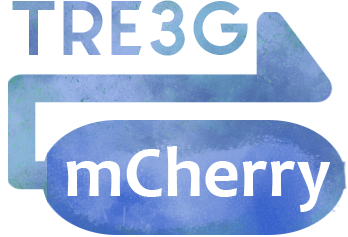 This is one of the output signals in our reporter cell during experiments. As the transcription factor, tTA, binds to TRE3G promoter regulating the downstream gene, mCherry is expressed. In our design, a series of reaction followed by the presence of GFP will release tTA, which will be translocated into the nucleus

This is a full composite part, split-GBP-tTA, of our detecting system in the reporter cells. As the split nanobodies segments being brought together by ligands, the split TEV protease segments conjugated to split-GBP are brought together and become functional. The functional TEV protease recognize and cleave at the TEV cutting site, followed by the translocation of tTA transcription factor into the nucleus, where tTA triggers the emission of output signal. To be certain that the release of tTA is only by TEV cutting, we add NES sequence in this detecting system.

A short peptide presented at the N-terminus of newly synthesized proteins that helps target to the secretory pathway.

This is a transmembrane fusion protein that anchors split-GBP-tTA on plasma membrane. It is commonly used in mammalian cells for expression of protein on surface.

The protein targeted by nuclear export signal (NES) will be exported from the cell nucleus to the cytosol. We use this characteristic to avoid the whole designed proteins going into the nucleus and cause the output signal emission with the uncleaved tTA. The position of NES sequence is designed to locate between TEV fragments and TEV cleavage site.

TEV proteases are the 27 kDa catalytic domains of the NIa (Nuclear Inclusion a) protein encoded by Tobacco Etch Virus (TEV), where TEV proteases cut polyproteins into single proteins during biogenesis. In our design, TEV protease is split into N-terminal and C-terminal fragments. When split GBP is brought together by the presence of GFP, the two TEV protease fragments will combine and cleave TEV cutting sites. After the cleavage, tTA is freed and translocated in to the nucleus and bind to TRE3G, the promoter driving output emission signal.[3]

TEV proteases recognize a linear epitope composed of 7 amino acids and cut the linkage between the last and the second-last amino acid. The high specificity of cutting amino acid linkages makes it a popular tool for direct expression in living cells and protein purification. In our design, we use ENLYFQL at TEV N-terminal and ENLYFQG at TEV C-terminal as cutting site according to Baeumler’s paper in 2017.[4]

The tetracycline transactivator (tTA) is the main character in Tetracycline-controlled gene expression. tTA binds to TetO operator, which regulates the expression of a transgene. We use this system to regulate the transgene of our proteins, which emit signal as output.In our design, tTA is a combination of tTa binding site and VP16, a transcription activator which triggers conformational change upon binding to the promoter. When tTA is released, it binds to TRE3G, containing several TetO sequence and a minimal promoter, tetracycline response element TRE. The binding of tTA and TRE3G will trigger the expression of downstream gene.[5]

A NLS (Nuclear Localization sequence) is an amino acid sequence that 'tags' a protein, which will consequently be imported into the cell nucleus by nuclear transport. It’s function is opposite to NES sequence.In our design, we have tTA sequence located between two NLS sequences, which help import our tTA into the nucleus after the TEV cleavage site being cut by the TEV protease.