After incubating GFP and the cells transfected with the GBP-tTA and mCherry, red flourescent signal (mCherry) can be observed in the cells that are bounded by GFP (Fig. 1). As the design of our sensing module can be effectively triggered, we proceed with further experiments to determine the sensitivity and induction time of BioWatcher system.


To determine whether soluble molecules from extracellular space can trigger our programmable signaling pathway or not, we applied a well-studied nanobody, GFP binding protein (GBP), in the experiments. The GBP was split into N-terminal fragment (GBP(N)) and C-terminal fragment (GBP(C)) and fused to the platelet-derived growth factor (PDGF) receptor transmembrane domains (Fig. 2). The expression of the red fluorescence protein, mCherry, which is driven by the TRE3G promoter, in this case, serves as an output of our designed pathways (Fig. 2). Molecular structure of DNA encoding split GBP-TM-TEV-tTA protein and mCherry protein are showed in Figure 2 along with the conceptual framework for the implementation of split GBP-tTA membrane tethered module and TEV-base signal release mechanism. The expression of red fluorescent protein, mCherry, is driven by the TRE3G promoter. 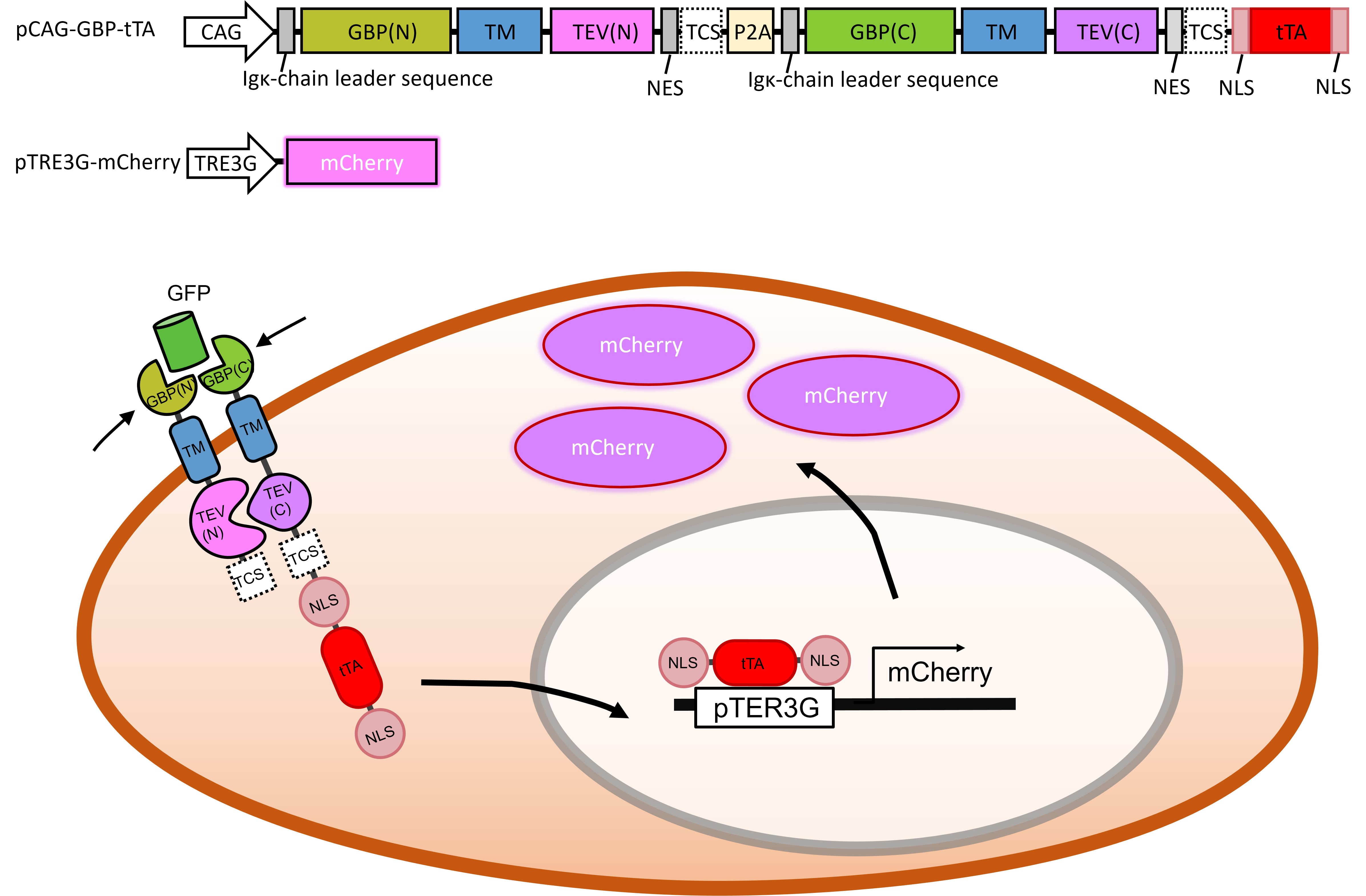 
293T cells transfected with pCAG-GBP-tTA and pTRE3G-mCherry were incubated with GFP (100 ng/ml) for 24 hrs. Subsequently, cells were fixed by 4% paraformaldehyde and stained with DAPI (blue, DAPI). The immunofluorescence results, confirmed by 94.7% of GFP-bound cells that are mCherry-positive, showed that GFP efficiently binds to the DNA-transfected cells and triggers the mCherry expression (Fig. 3). Arrows indicate GFP and mCherry double positive cells. The hallow arrowhead indicate GFP positive and mCherry negative cells. 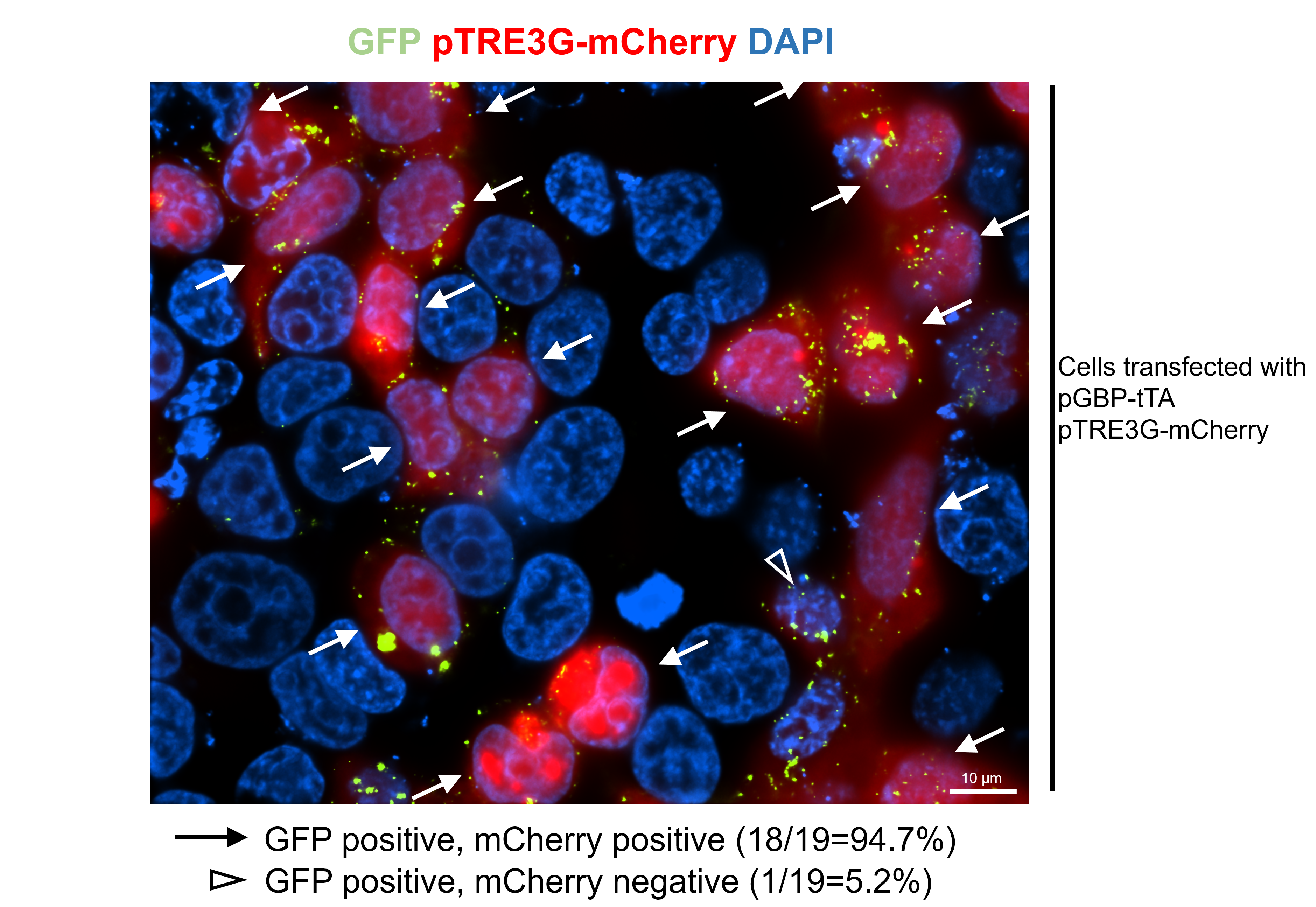 
To assess the sensitivity of this system, cells expressing the components of this programmable signaling pathway were incubated with different concentration of recombinant GFP (0~100 ng/ml) (Fig. 4a). 293T cells transfected with pCAG-GBP-tTA and pTRE3G-mCherry were incubated with the GFP at the indicated concentration for 24 hours. Subsequently, cells were fixed by 4% paraformaldehyde and stained with DAPI (blue, DAPI). The immunofluorescence results showed significant increase in the number of mCherry-positive cells as the concentration of the incubated GFP rises. It reaches the plateau level at 75 ng/ml GFP treatment. These results indicate that GFP triggers this programmable signaling pathway in a dose-dependent manner (Fig. 4a,b). The normalized population of mCherry-positive cells after GFP treatment at the indicated concentration for 24 hours was measured. The asterisks (*) represent P <0.05. Error bars represent the SEM (data from four independent experiments). Noted that a significant increase in the population of cells expressing mCherry can be observed at GFP concentration as low as 10 ng/ml (Fig. 4b; p<0.05), it is confirmed that this programmable signaling pathway is highly sensitive. 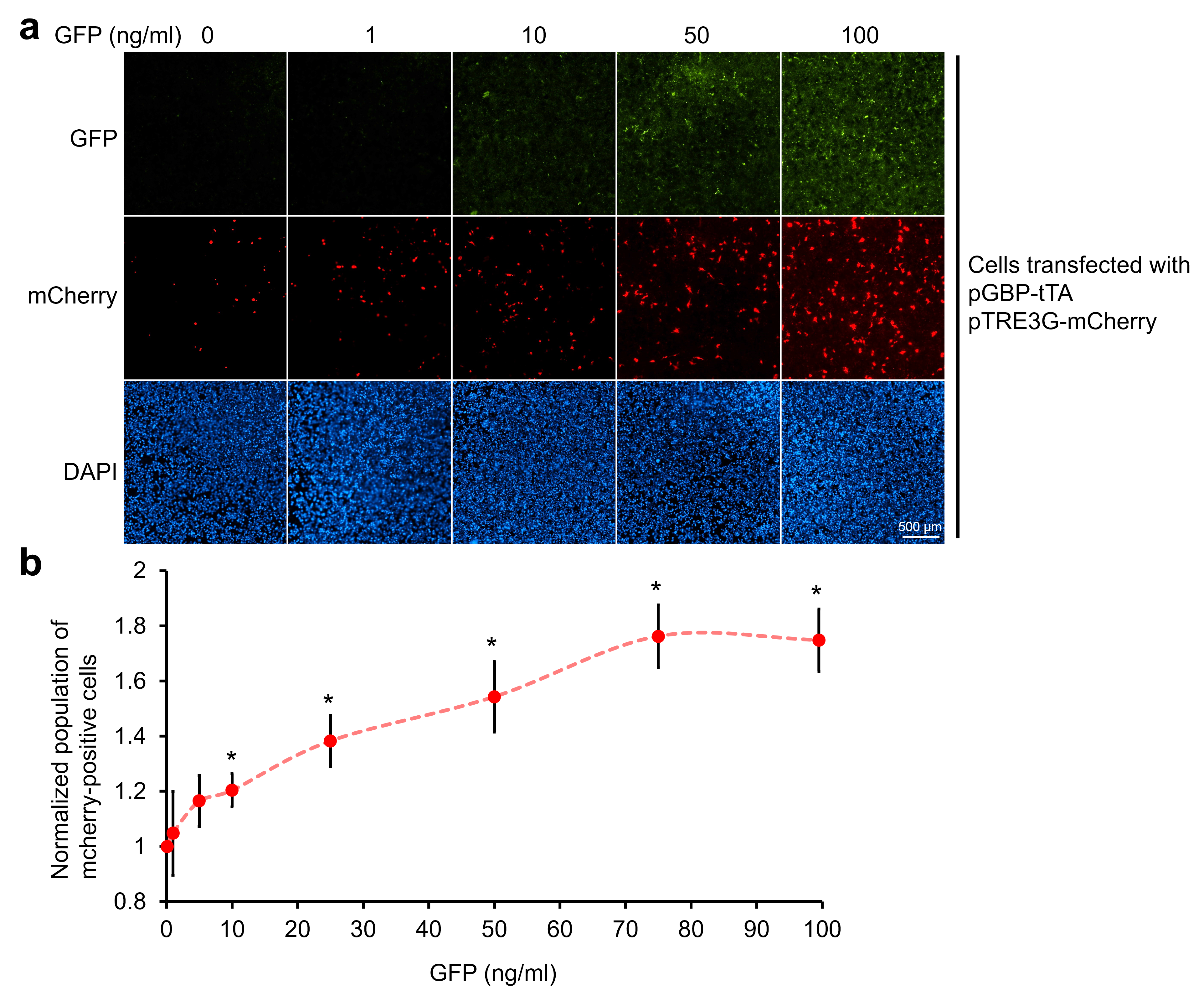 To determine the induction time of this system, 293T cells expressing the components of our programmable signaling pathways were incubated with GFP for different time periods. As results showed, GFP treatment induces a significant increase in the population of mCherry-positive cells after 6 hours of incubation and reaches the plateau level after 12 hours of incubation period (Fig. 5a,b). These results confirmed the rapid response of our system to the stimulus from extracellular soluble GFP.

(Fig. 5a) 293T cells transfected with pCAG-GBP-tTA and pTRE3G-mCherry were incubated with GFP (100 ng/ml) for the indicated time. Subsequently, cells were fixed by 4% paraformaldehyde and stained with DAPI (blue, DAPI).

(Fig. 5b) The normalized population of mCherry-positive cells after GFP treatment at the indicated time was measured. The asterisks (*) represent P <0.05. Error bars represent the SEM (data from four independent experiments). 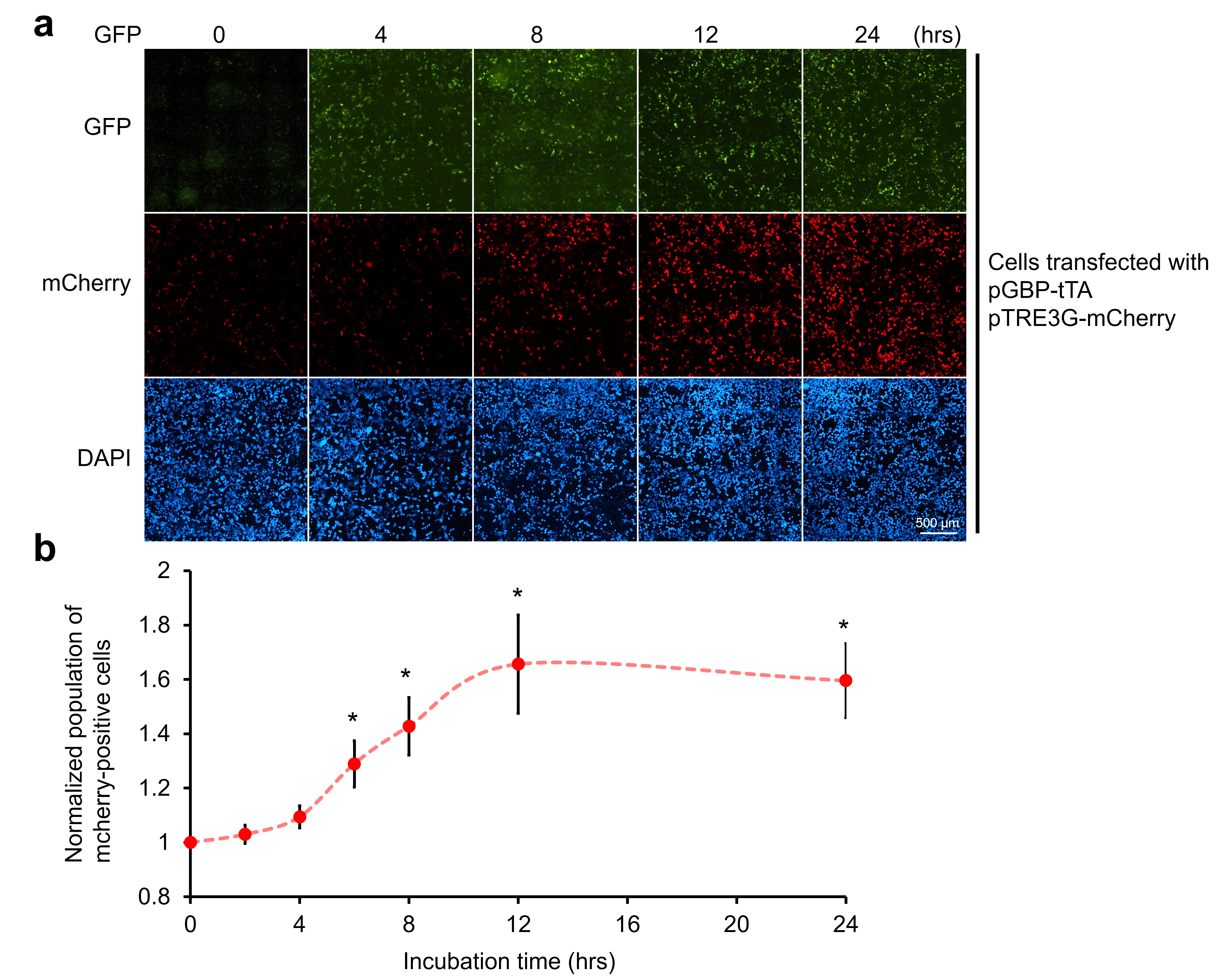 
For the output signal, we adopted a codon-optimized autonomous bioluminescence system, lux gene cassette, originated from microbes. This codon-optimized lux bioluminescence system scavenges endogenous intermediated metabolites stock within mammalian cells and converts them into substrates by enzymes, hLuxC, hLuxD, hLuxE, and frp (Close et al., 2010; Xu et al., 2014). To this end, CMV promoter is designated to continuously drive the expression of hLuxC, hLuxD, hLuxE, and frp for substrates production, while TRE3G promoter is used to inducibly drive the expression of hLuxA and hLuxB to form luciferase dimer (Fig. 6). A customer-oriented application in diagnostic aspect with considerately high commercial potential we proposed is shown below. Figure.6 exhibits the molecular structure of DNA encoding split GBP-TM-TEV-tTA protein, hLuxA-hLuxB and hLuxC-hLuxD-hLuxE-frp protein along with the conceptual framework for the implementation of split GBP-tTA membrane tethered module and TEV-base signal release mechanism. The expression of hLuxC-hLuxD-hLuxE-frp protein and hLuxA-hLuxB were driven by the CMV and TRE3G promoter, respectively. 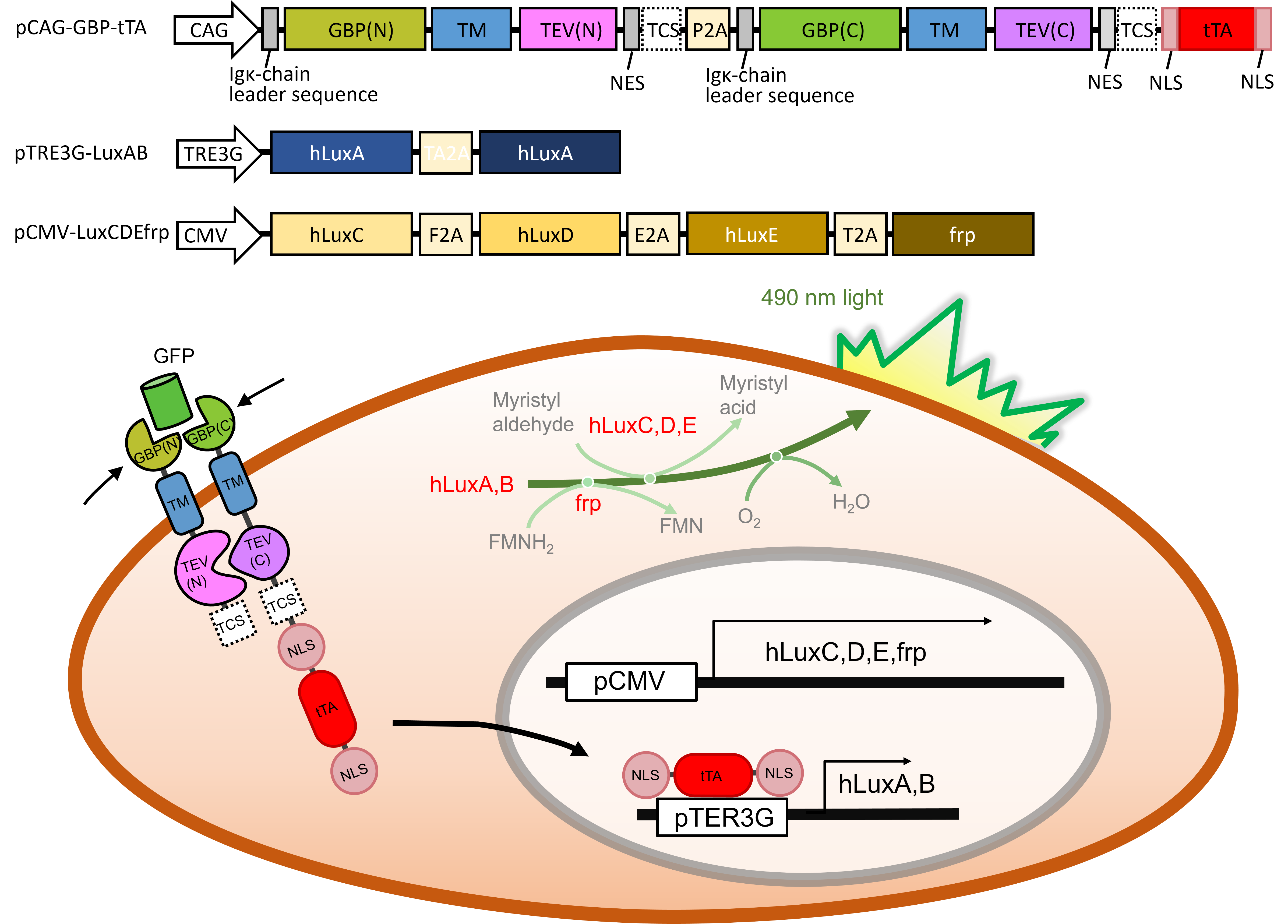 After 293T cells transfected with the indicated plasmids were incubated with GFP (100 ng/ml) for 24 hours, the treated cells were imaged by IVIS Spectrum using integration time of 5 minutes. Bioluminescent output can be obtained in the presence of both substrates and inducibly formed luciferase when both promoters are activated. Overexpression of hLuxA, hLuxB, hLuxC, hLuxD, hLuxE, and frp in 293T cells efficiently producing bioluminescence signal without additional chemical substrates is shown in bioluminescence imaging in Fig. 7 (left well). The capability of this design producing detectable autonomous bioluminescence signal after receiving soluble stimuli as input, GFP in the experiment, is approved in right wells in figure 7. After GFP treatment, bioluminescence radiance highly distinguishable from background is detected in 293T cells expressing all the components of our programmable signaling pathways (Fig. 7, middle and right wells). The split GBP, targeting GFP, in our system can be substituted by any other nanobodies for recognizing different biomarkers in extracellular space (ex. in the bloodstream). 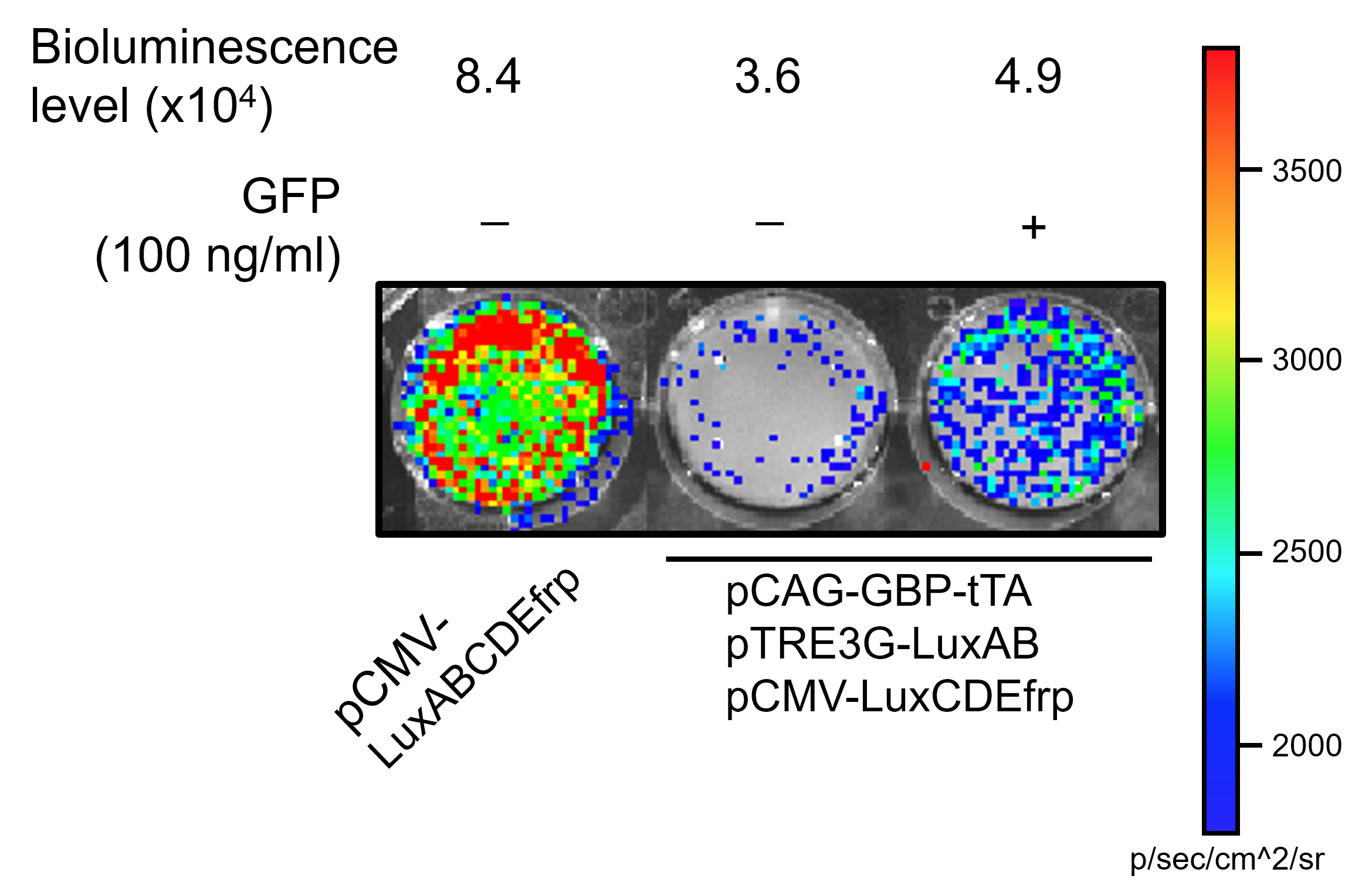 Fig. 7. The bioluminescence image of our system after GFP treatment.