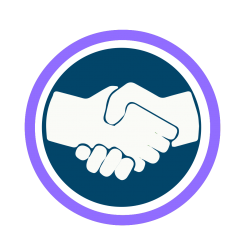 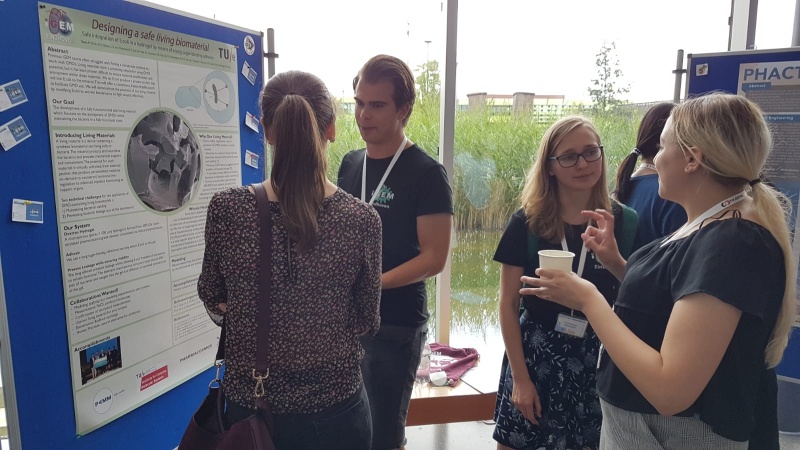 On Thursday the 19th of July we went with 4 group members to the European iGEM meetup of 2018. This was a three day event starting on Friday. It started with talks about biotechnology and physics behind synthetic biology. Afterwards we had a chance to get into touch with companies like DNA biosolutions and Promega. The conference ended with a poster session in which we had opportunities to present a poster of our project to 32 other teams from all around Europe. Afterwards we continued with a tour and some evening activities to finish it off.

On Saturday there was more talks about relevant topics in synthetic biology. We also had more opportunities to speak about our project and meet more iGEM teams. On top of that we had a workshop session. We had opportunities to do several workshops of which we followed one which was given by the Dutch National Institute for Public Health and the Environment. In the workshop we worked together with people from different teams to focus on the design and safety of a certain project.

On Sunday there was a short session with two more scientific talks and some inspiring words by Randy Rettberg, the President of the iGEM Foundation!. All in all we gave, and received, a lot of feedback and additional ideas from other teams. We also gained great opportunities for some sweet collaborations with other iGEM teams. 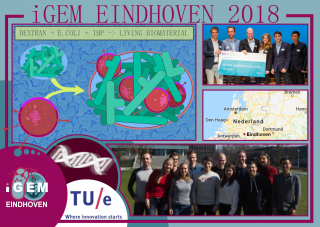 Postcard with our team in TU/e contest

In order to people more aware about synthetic biology we collaborated with iGEM Düsseldorf. We made postcards of our own project to show what synthetic biology is and how this is related to the iGEM competition. A lot of other iGEM teams also designed their own postcards and all contributing teams received their respective post cards. We’ll be able to hand these out to people all over the world to show them how synthetic biology contributes to solving problems in the world.

Checking a Biobrick for iGEM Utrecht

The iGEM team of Utrecht came to us with a problem. In their project they were planning to use the Tar receptor, which was available in the iGEM distribution kit (2018). However, when they did the transformations, they saw something surprising. When they analysed the colonies using a biocular microscope, they were able to detect GFP expressions. However, the sequence of the tar receptor should not contain GFP. In order to find out whether the sequence for the tar receptor was correct they approached multiple iGEM teams to uncover the truth. We did the transformation like they did and checked if the colonies contained GFP like they saw. However, we were not able to see these GFP expressions. Like us, other iGEM teams also saw that there was no GFP expressions when they did the transformations, and therefore we claim this mystery solved. The given sequence of iGEM turned out to be correct.

iGEM Utrecht organized an interview with the NRC, which is a Dutch newspaper. All six of the Dutch iGEM teams were invited to attend this interview. On the 19th of September, we traveled to Utrecht for a sitdown with an NRC reporter. Several topics were discussed, such as the impact of Biobricks on the ease of synthetic biology, how to implement your system into society and so forth. We were glad that this opportunity arose since the iGEM competition, or even synthetic biology itself, is relatively unknown in the Netherlands and this would be a perfect way to increase public awareness the possibilites provided by this field of research.

During the European meetup in Munich we had an interesting talk with iGEM Hamburg right off the bat. Their project involved a mosquito trap that relies on a lure-and-kill mechanism. Their trap had 2 cultures, a culture of E. coli that produces mosquito attractants and are kept alive the second culture of S. elongatus. This culture produces glucose using CO2 and sunlight. They were planning on using a hydrogel to act as a reservoir for odor bait molecules and insecticides, and to provide a surface for mosquitoes to land on. Since we are also working with hydrogels, this connected us easily. We told them that we were aiming at making a living material using a combination of E. coli and dextran hydrogels. iGEM Hamburg was interested in implementing our system in their trap and this started our collaboration.

Our dextran hydrogel was designed to be very stable, as it contains anchored bacteria. Any rupture within the hydrogel could increase the risk of bacteria escaping. However this also brought along a problem. As the hydrogel was very stable, this caused difficulties dissolving our hydrogel. This was important as it would be very interesting to test the bacteria witin the hydrogel for viability and other characteristics. When we told iGEM Hamburg about this problem, they told us they wanted to help us as they had a lot of scientists on their team, and would like to do some experiments on the hydrogels. Therefore, we sent them some of our cubic hydrogels.

They incubated our hydrogels (190 mg) in 1 mL of aqueous solutions of NaOH, HCl, lactic acid and the Thermofischer GelEx-Kit Binding Buffer for 2 hours, and then checked for decomposition. Afterwards they checked again for decomposition after 24 hours.

Only the acqueous NaOH solution seemed to work as a dissolving solution, as after 2 hours the mass decreased to 165 mg. In acqueous HCl solution and in lactic acid solution, there was no change in mass. Interestingly in the Thermofischer GelEx-Kit binding buffer the hydrogel seems to take in the solution as the mass increased to 215 mg after 2 hours.

After 24 hours they measured again. In NaOH solution, the mass had decreased further to 150 mg. In HCl and lactic acid solution the hydrogel also seemed to start dissolving as the mass was 170 mg and 157 mg respectively. The mass of the hydrogel that was immerged in Thermofischer GelEx-Kit binding buffer increased even further to 235 mg.

Bar graph that shows the stability of our GMA-dextran hydrogel in different types of dissolving reagents.

On the 17th of August iGEM Leiden organized a Dutch Meet-Up including a BBQ and drinks. On top of that there was a pubquiz which consisted of questions about every team and their respective projects. We got to know in detail what every project was about and it was a great evening to connect and share with each other.

During the European meetup in Münich we spoke with iGEM Düsseldorf about how we want to make a living material. They recognized the problem of bacterial overcrowding within our construct. Since our bacteria will keep dividing and cannot escape the hydrogel, at some point bacteria will be over-saturated which can lead to problems in protein expression. They offered to help us, and we had a meeting with them over skype. They were making a construct that uses the Lux Quorum sensing. Their construct contained 3 plasmids: Luxl (synthase for AHL), LuxR (molecule where AHL binds and can then bind to promotor) and pLux (promotor to which LuxR +AHL can bind). When the promoter gets activated, a phage lysis gene will the synthesized. In our case they offered to send us the plasmids without the Luxl in the construct, so when we add AHL to the hydrogel medium, cell growth will be inhibited. This is a great solution to keep our bacteria in control, as we want them to stay in steady numbers within our hydrogel, with steady lysostaphin production. 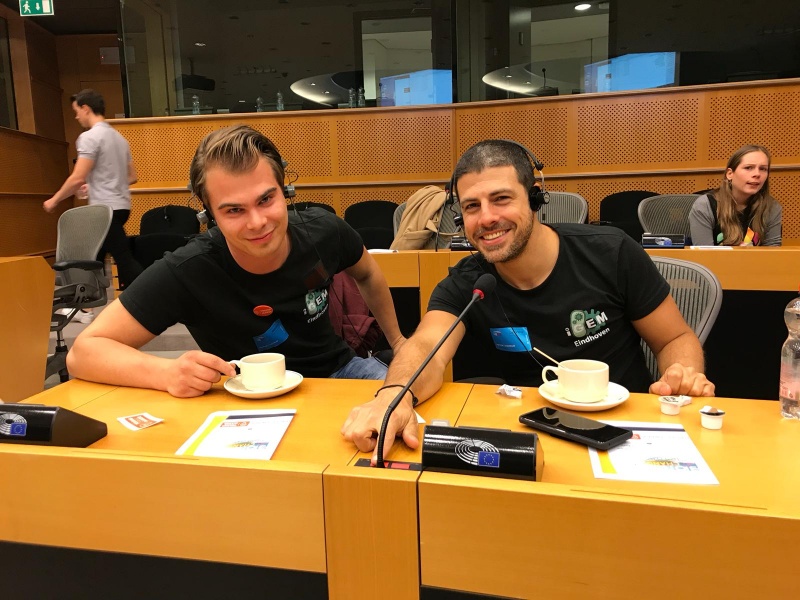 The UCLouvain iGEM team organized a biotechnology conference on the 28th of September. This meetup existed of 2 parts. First there was a debate on the legal frame for applied research project, especially in the antimicriobial resistance, which is very relevant for our project. The second part was the conference in which three speakers that talked about biotechnology. On top of that we also got to show our project with a pitch in the European parliament!

iGEM Marburg from Germany also contacted us to collaborate. They developed their own version of the iGEM Interlab Study 2018 using Vibrio natriegens bacteria instead of E. coli along with electroporation instead of heatshock. When we agreed to participate in the study, they sent us the required chemicals, bacteria and protocol.

Their protocol started with making some high OD600 stocks of V. natriegens with an OD600 of 16 by washing and centrifuging. This was necessary to remove as much salt as possible to prepare for the electroporation. After that the protocol would exactly follow the Cell Measurement Protocol from the iGEM Interlab Study. Afterwards electroporation was used for transformation instead of heatshock. However, when we were preparing the high OD600 stocks something went wrong when centrifuging and washing. We tried to get the required OD600 of 16, however we did not have enough volume and bacteria to further concentrate and got stuck at an OD600 of 11 with only little volume left. Evaluating to iGEM Marburg we told them what we thought went wrong. Unfortunately we were only sent a set of chemicals for one try of their Interlab Study and therefore we were not able to complete their Vibrio natriegens interlab.

On Friday the 19th of October, iGEM Eindhoven hosted the Dutch Mini Jamboree. This was an event to practice for the real deal in Boston a week later. All of the six Dutch iGEM teams (Delft, Utrecht, Leiden, Rotterdam, Groningen and Eindhoven) came to Eindhoven University of Technology to present their project and have a final practice session with all of the teams. It started with a poster session followed by a lunch. After lunch, the presentations started. These presentations were performed in front of four experienced judges. This jury consisted of Will Wright (European iGEM Ambassador), Pieter van Boheemen (Dutch Institute for Public Health and Environment), Maaruthy Yelleswarapu (PhD in Nijmegen, has previous iGEM experience) and Bob van Sluijs (1st runner up overgrad in 2014 with Wageningen RU). These judges gave feedback to the teams so that details could be finalized to give the best possible presentation in Boston. Also, feedback on posters was provided. The event was concluded with an ‘’After iGEM’’ talk by Will Wright. After that, we had dinner with pizza and we went to the bar of our study association for some fun and drinks. 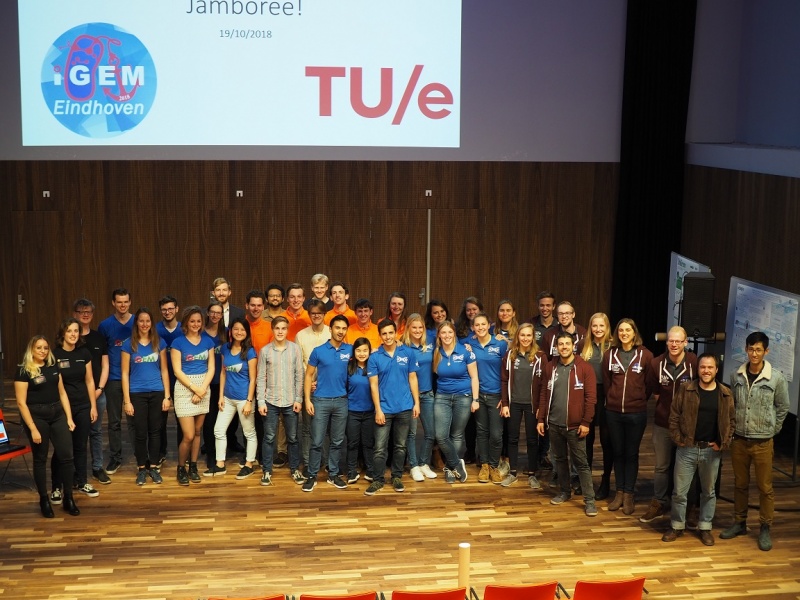 All the teams at Dutch Mini Jamboree.