To test if our adhesin-expressing bacteria can bind to the hydrogel, we designed and performed gel seeding and washing experiments (see detailed protocol). A scheme of these experiments can be seen in figure 1. During these experiments, hydrogels were incubated with bacterial cultures (1) and protein expression was induced (2) then the gels were washed (3) in Tris buffer to remove bacteria not firmly attached to the gel. Finally, the gels were manually pulverized (4), and samples were grown on agar plates (5) and colony counting was performed to estimate the number of bacteria attached to the gel vs those washed off. The results were promising: adhesin-expressing bacteria were retained at much higher rates than other strains and conditions tested.

In figure 2, the aggregated results of multiple experiments are shown. Gels were seeded, and protein production induced overnight. Cell density was measured by OD600 and diluted where necessary to make cultures as similar as possible. Afterwards, gels were transferred into a wash buffer and shaken at 250RPM for an hour. Finally, samples were taken. The following conditions are compared (From left):

As can be seen, the hydrogels seeded with cells expressing our complete adhesin plus secretion system retained the highest number of cells on multiple experiments and least number of bacteria were retained in the gel without the sugar-binding domain. As we predicted, chelating free calcium ions with EDTA during wash caused reduction of retained cells in the gel, since calcium is essential to the proper folding of the adhesin. We concluded from these results that our adhesin-expressing E. coli bound the hydrogel much tighter than other strains and that the binding was indeed facilitated the sugar-binding domain. This conclusion was lent additional strength by testing washed and unwashed gels by Scanning Electron Microscopy

Having demonstrated that our cells indeed bind tightly to the hydrogel, the next logical step was to test the adhesin in a prototype device . 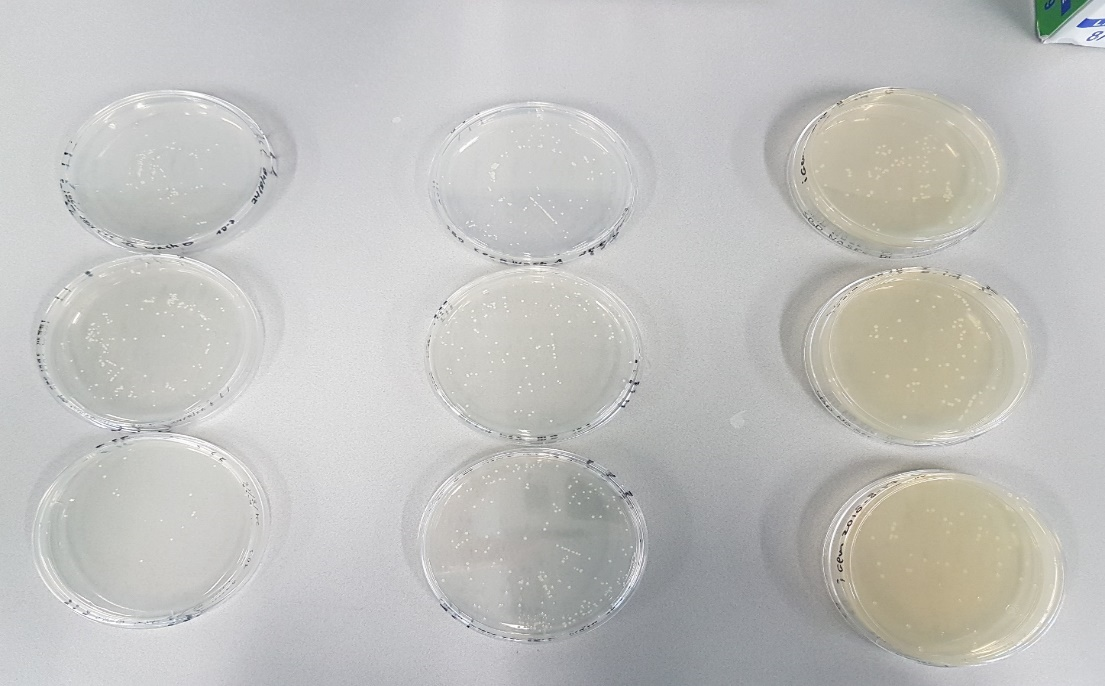 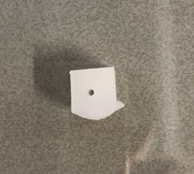 Figure 4. Hydrogel with chamber inside

Since we have chosen to demonstrate our platform by creating a patch for infected wounds, we designed and produced a hydrogel with a cavity to test leakag (See figure 4). After injection of bacteria into the cavity, gels were transferred into petri dishes with culture medium. Samples were taken from the medium at different time-points and incubated on agar-LB plates to estimate number of bacteria that escaped the hydrogel (see detailed protocol). In later experiments medium was refreshed daily to reduce the effect of proliferation in medium. We compared our adhesin-expressing bacteria to bacteria without adhesin (but with secretion system). 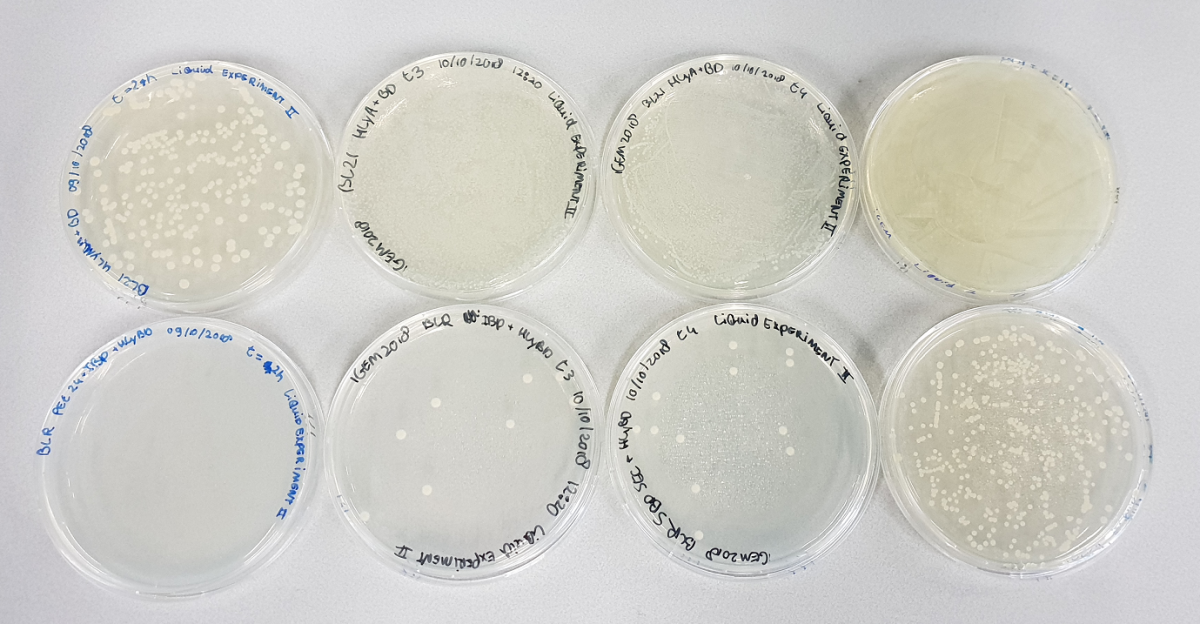 Figure 5 shows the results of cavity experiment II, comparing between adhesin-expressing bacteria and a strain without adhesin. After culturing and overnight induction of protein expression, Bacterial density was compared by OD600nm values for both cultures and was found to be within 5% of the same value, (OD600nm = 2.7A). 10μL induced culture was injected into cavity and 25mL of culture medium were added to each petri dish. Samples were taken by removing medium, vortexing it and plating 100μL undiluted on an agar-LB plate. Medium was thereafter returned to the petri dish containing the hydrogel. As we can see in figure 5, the number of cells in the medium rises many orders of magnitude faster for the control compared to the adhesin hydrogel. Since growth rates of both strains were generally similar and bacterial density (as measured by OD600) very close, this suggests leakage was several orders of magnitude higher for bacteria not expressing adhesin. The trend continued to the fourth day, after which the experiment was terminated. To gain more insight into the distribution of bacteria in the cavity and gel, scanning electron microscopy was performed (results can be found below) These results were very encouraging, but since the medium was not changed between measurements, proliferation of bacteria in the medium may have been a confounding factor. To correct for this, we devised cavity experiment III. In this experiment the LB medium was refreshed daily. Same cultures were used as in cavity experiment II and 7μL culture was injected into the cavity. The experiment was conducted in triplets. 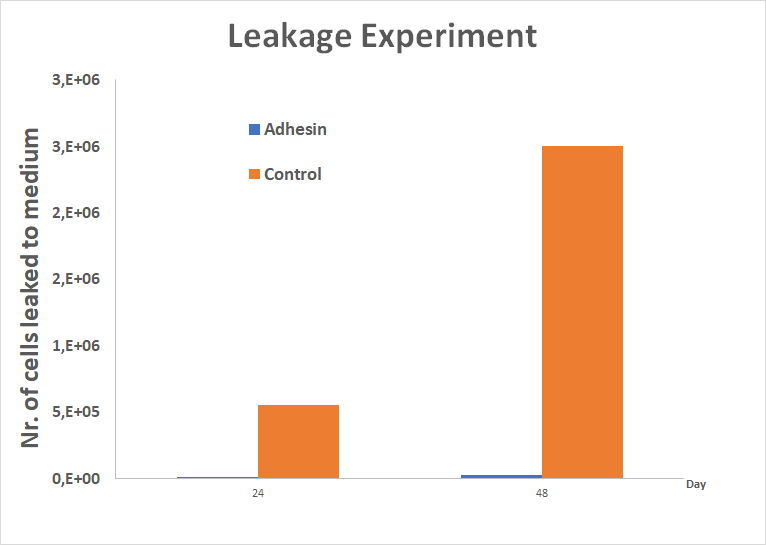 Figure 6. Estimated number of cells leaked daily into medium, calculated by number of CFUs originating from a 100μL sample, 10x diluted and plated on agar-Lb Plates. The number of CFUs after 48H was roughly estimated at 1000 for day 3, but was probably higher (see figure 8)

In figure 6 we plotted the average estimated number of cells leaked daily into the medium from multiple gels (3 with adhesin, 3 without). The number was backwards-calculated from the number of Colony-Forming Units (CFUs) a 10x diluted sample of 100μL taken from the medium after vortexing. The numbers calculated for each day were averaged for triplicates (see figure 7 and 8). Left column is after 24 hours the right column 48 hours. For the samples of the non-adhesin control at 48H we roughly estimated the number of colonies at 1000 since there were too many to count on the plates (see figure 8). Not shown is initial pass-through measurment taken immediatly after seeding that was comparable for both control and adhesin. The high density of bacteria combined with the liquid environment (gels were submerged in medium up to roughly 8mm) resulted in some bacteria flowing through the large pores (50-100 µm in diameter) of the hydrogel too fast to bind to the hydrogel. After 24H, the control group that does not express the adhesin showed significantly, the difference is predominantly due to the expression of adhesin that helps the bacteria to anchor to the dextran of the hydrogel. As can be seen in the graph, our adhesin-expressing bacteria demonstrated dramatic reduction in bacterial leakage, with an estimated 1000 times reduction after 48H. 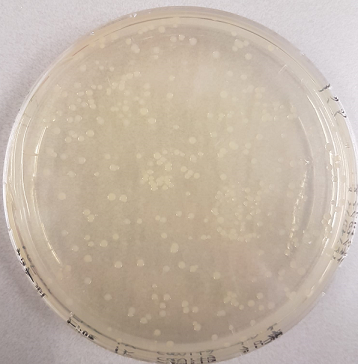 Figure 9. Colonies from 100μL samples, 104 times diluted, taken after 5 days of incubation of gel previously soaked in medium and injected with 7μL bacterial culture with OD600=2.7A

Armed with these fantastic results, we wanted to demonstrate that our bacteria can thrive in the gel for prolonged periods without continuous addition in medium. To accomplish that, we soaked hydrogels in medium for an hour, then left them in an incubator for up to 5 days. Afterwards, we pipetted 10μL up and down several times in the cavity and then plated it on agar plates (with appropriate antibiotics) at different dilutions. Figure 9 shows the 10-4 dilution of the sample, the lowest concentration. As is clearly visible, there is an abundance of colonies, demonstrating the bacteria still flourished in in the gel after 5 days. Having demonstrated that our gel-adhesin system dramatically reduces bacterial leakage and that the gel provides a suitable environment for maintaining the bacteria for multiple days, this branch of the experiment was complete. We next moved to testing the second part of our wound healing patch – lysostaphin secretion. To read more about that, have a look here.

Finally, to gain more insight into the interaction of bacteria with the hydrogel, we performed SEM experiments on seeded hydrogels for both washing and leakage experiments. In each case, gels were fixed with 4% formaldehyde solution for 20 minutes, then transferred into 70% ethanol and kept at 4oC. Before performing the SEM, samples were taken from each hydrogel and a gold sputter coating was applied (see protocol ). Figure 11 below shows SEM images from washing experiments. On the left is an image from an unwashed gel with non-adhesin bacteria. As is visible, in the absence of adhesin bacteria often formed clumps. However, these were rarely detected after washing. In the absence of adhesin, very few bacteria were left after washing. On the right, a sheet of individual bacteria are still bound to a hydrogel after washing. Together, these results support the plating results, indicating that adhesin-expressing bacteria bind individually to the gel using the sugar-binding domain , strongly enough to withstand vigorous washing.

In figure 12, we show two images acquired from gels during the leakage experiments. Left - a hydrogel seeded with non-adhesin bacteria. Right – a hydrogel seeded with adhesive-expressin bacteria. While not quantitative, these results are quite representative of what we observed. For the non-adhesin hydrogels, we needed to search for bacteria, having many images with only a few or none. For the adhesion-expressing bacteria, bacteria were often visible in large numbers on many of the images. As a whole, the SEM results add weight to the conclusions drawn from the washing and leakage.