As described on our design page, we based our hydrogel on a paper from 2012, in which glycidyl methacrylate derivatized dextran is polymerized into super macroporous dextran hydrogels. The subzero temperature polymerization conditions employed in this paper result in an interconnected supermacroporous hydrogel with pores ranging from 1 to 100 micrometer. This unique morphology allows for the rapid and non-restricted mass-transport of solutes of virtually any size and has already been used as a matrix for cell seeding.(1) Therefore, this paper has been used as a starting point for the synthesis of our hydrogel. 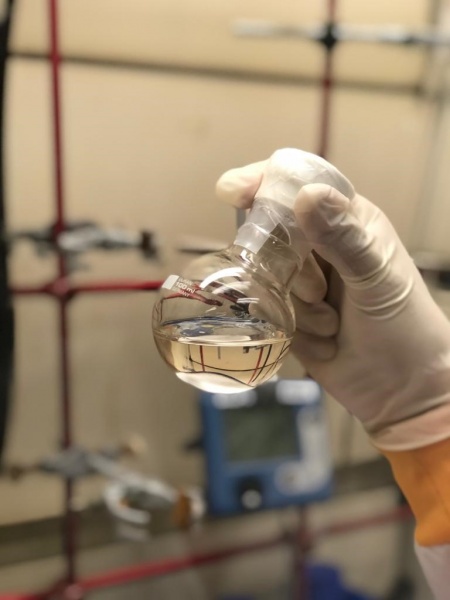 Before the dextran polymer molecules can be crosslinked into a covalent network, they first need to be functionalized. As dextran source we used dextran 500kDa polymer of pharmaceutical quality, kindly provided by Pharmacosmos. Each polymer chain has a weight of approximately 500kDa, and therefore consists of approximately three thousand glucopyranose units. Based on the methods described in the article by Plieva et al.(1), we decided to functionalize the dextran polymer chains by methacrylation. Subsequently, the methacrylated dextran molecules can be polymerised into a covalent hydrogel network via radical polymerisation.(1) The methacrylation reaction using glycidyl methacrylate is illustrated in figure 1. We designed the reaction in such a way that for every 100 glucopyranose units, 60 glucopyranose units are functionalized with a methacrylate group (a degree of substitution (DS) of 60). The resulting reaction mixture of this reaction can be seen in figure 2. Exact details about the functionalization and purification conditions can be found in the Protocol section.

Figure 1. Reaction scheme for the methacrylation of dextran.

We polymerised the methacrylated dextran chains by radical polymerisation under cryotropic gelation conditions; the polymerisation reaction is carried out at subzero temperatures, with frozen water acting as porogen. Dissolved substances are concentrated in the liquid microphase, which are small non-frozen regions in the mixture. In this phase, the gelation of the dextran hydrogel occurs, generating a hydrogel with an interconnected macroporous structure.(1) After 24 hours of reaction at subzero temperature, the gels are thawed, melting the ice crystals and thereby removing the porogen. Subsequently, the gels are washed to remove unreacted chains or unreacted radical moieties. We used scanning electron microscopy (SEM) to confirm the macroporous structure of the dextran hydrogels, as can be seen in the Result section.

During the optimization process of the hydrogel synthesis, we ran into one major problem: the instability of the hydrogels. The first synthesis attempts resulted in very brittle hydrogels which could not be used for further experiments. Several conditions were investigated to find the optimal polymerisation conditions. First of all, we increased the degree of substitution (DS) by adding more glycidyl methacrylate to the dextran functionalisation reaction. A higher degree of substitution results in a higher crosslinking degree, which would hopefully result in more stable hydrogels.(1) Using Scanning Electron Microscopy, it was determined that a degree of substitution of 60 yields the optimal microstructure. Attempting to enhance the stability of the hydrogel further, we investigated different concentration ranges of the radical polymerisation initiating compounds TEMED and APS. Varying the concentration of both compounds from 0.2 to 5X the concentration described in the paper by Plieva et al.(1) and attempting different combinations, did not result in more stable hydrogels. Changing the environmental conditions turned out to be essential. By carrying out the initiation at 4 °C, we could delay the onset of the polymerisation reaction and allow ice crystals to grow more rapidly in the gel. These new environmental conditions with the standard chemical equivalents of APS and TEMED, resulted in firm and strong hydrogels. 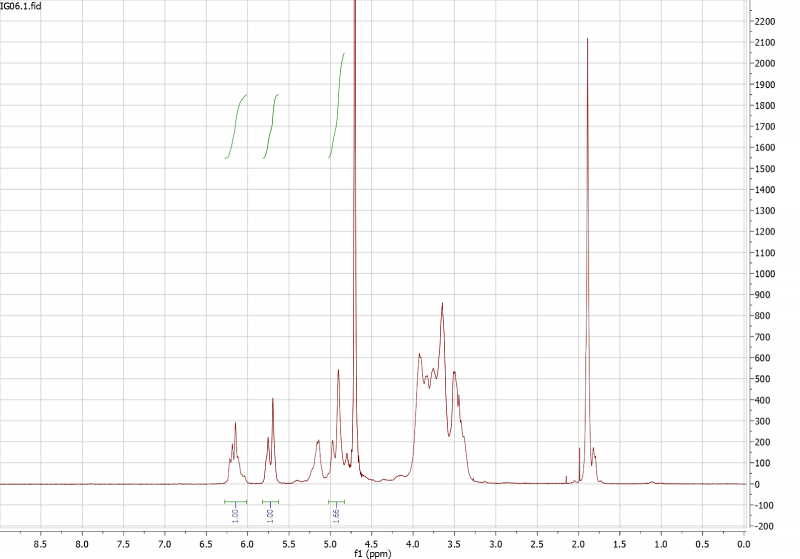 Figure 3. NMR of Dex-MA with a Degree of Substitution of 60

Characterization of the degree of substitution

The degree of substitution (DS) of the methacrylated dextran chains was characterized using 1H-Nuclear Magnetic Resonance spectroscopy based on the method described in the paper by Plieva et al.(1) The spectrum was measured in D2O. The DS is calculated as (100x)/y, where x is the average integral of the protons at the double bond at δ 5.7 and δ 6.1 ppm and y is the integral of the anomeric proton at δ 4.8 ppm. The 1H-NMR spectrum can be seen in figure 3, which is the same spectrum as the one reported in the paper.(1) Our methacrylated dextran has a degree of substitution of 60.

To characterize the microstructure of our dextran hydrogels, we performed Scanning Electron Microscopy experiments. For the exact experimental details about these experiments and sample preparation, see the Protocol section. We could confirm that our hydrogel forms a super macroporous structure, with pores on the micrometer scale. In figure 4, you can see the microstructure of our hydrogel at different length scales. 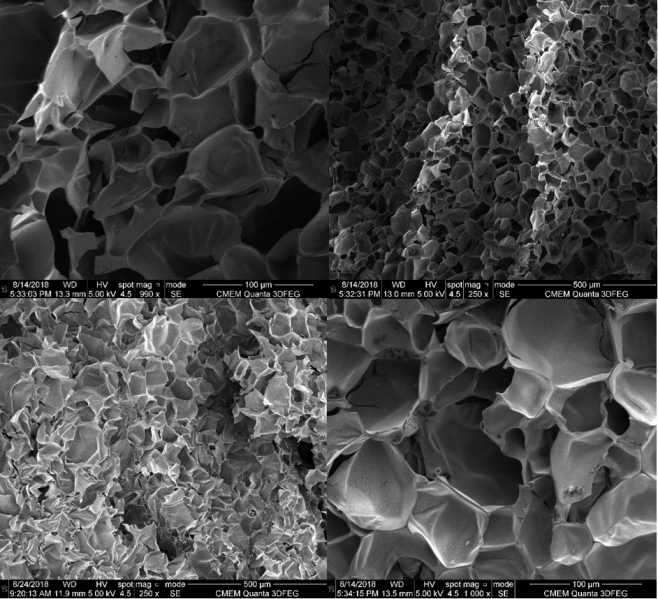 Figure 4. SEM images of the hydrogels with a DS of 60. Different length scales are shown at different positions, illustrating the supermacroporous character of the hydrogel.

We adapted the shape and size of our hydrogels depending on the experiment. Below the different prototype gels we created can be seen.

This hydrogel (figure 5) was synthesized to investigate if the outcome of our modeling experiments can be realized with our hydrogel. The modeling results showed that a thin hydrogel with a thickness of approximately 1 mm would be the thinnest hydrogel still capable of killing S. aureus effectively. As we want our hydrogel to be as thin as possible while remaining effective, we synthesized this 0.75 mm thin hydrogel to demonstrate that our hydrogel material is suitable for creating such a thin patch. We could demonstrate that a hydrogel of this thickness could be synthesized and handled, illustrating that our ideal patch that we have modeled can also be produced in reality.

This prototype (figure 6) was used to improve the consistency in the adhesin experiments. Polydimethylsiloxane molds were created in collaboration with Dr. Manoj Sharma through which a glass rod can be inserted halfway into the centre of the gel. Pouring the polymerizing gel mixture into this mold results in the synthesis of the cubic cavity hydrogels. 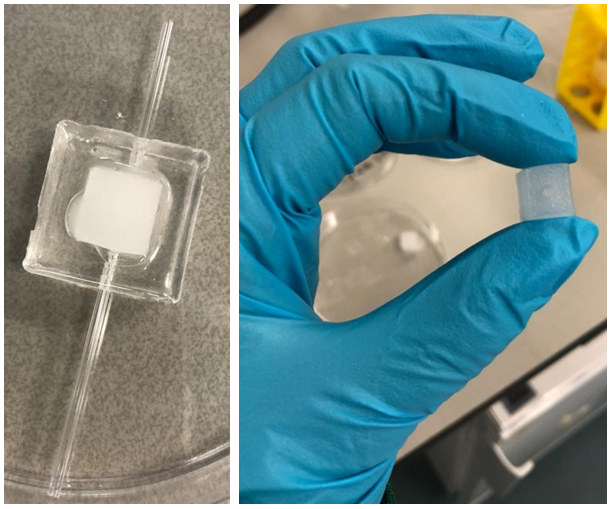 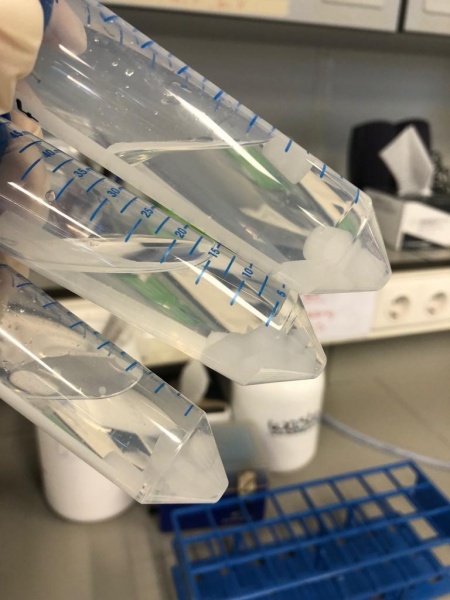 As a collaboration, the iGEM Hamburg team 2018 was looking for a suitable hydrogel for their project. They desired a hydrogel that is stable under acidic conditions, is non-toxic, and non-degradable. We sent our hydrogel, and iGEM Hamburg team 2018 tested our hydrogel on all these different requirements. Our hydrogel turns out to be remarkably stable under varying conditions which exceed the tolerance of most common bacteria. For the experimental results and explanation, please visit the Collaboration page.