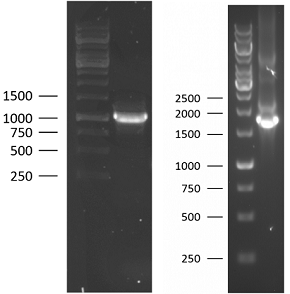 To demonstrate the functional improvement over the original truncated lysostaphin BBa_K748002 created by HIT-Harbin 2012, we intended to assemble our BioBrick BBa_K2812004 with the T7 promotor BBa_K525998, allowing protein expression by induction with IPTG. Since the part BBa_K2144001 from iGEM Stockholm 2016 is this exact assembly, we requested their part from the iGEM registry and we transformed it successfully in E. coli BL21 (DE3). Colony PCR was used to pick colonies carrying the correct insert length. The results can be seen in figure 1. After subsequent culturing and miniprep to isolate the plasmid DNA, we sent the sample for sanger sequencing and could confirm the sequence. We also performed colony PCR and subsequent culturing, miniprep and sequencing on our new part BBa_K2812004. The results of the colony PCR can be seen in figure 1.

Transformed E. coli BL21 (DE3) bacteria were cultured overnight at 37 °C, followed by protein induction at an OD600 of 0.5-0.8 by adding 0.5 mM IPTG, also at 37 °C. Before induction, a cell pellet sample was taken as control (uninduced SDS sample, t0). Cell pellet samples were collected after 3 hours of induction (induced SDS sample, 3h) and after overnight induction (induced SDS sample, o/n). All samples were prepared for SDS-PAGE. The SDS gel can be seen in figure 2a. No clear overexpression of a band around 27 kDa, the expected length of truncated lysostaphin, can be seen after induction of the construct. There is no difference, except for overall intensity due to bacterial growth, between the to and 3h sample. Similarly, the o/n sample shows no difference with the samples at t0 or 3h, except for overall intensity due to bacterial growth. 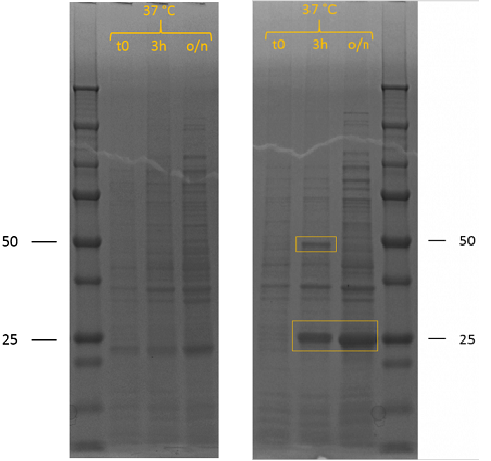 Figure 2. (a) SDS-PAGE of the truncated lysostaphin construct under control of T7 promotor. First row: BioRad All Blue Protein ladder, t0 is uninduced sample, 3h and o/n is time after induction. (b) SDS-PAGE gel of the Lysostaphin-HlyA biobrick protein expression experiment with the same ladder and conditions.

In contrast, when the same protocol was followed for our assembled BioBrick BBa_K2812004, we did observe clear bands at approximately 27 kDa and 23 kDa (figure 2b). We also observed a band at 50 kDa, representing the full construct consisting of lysostaphin and HlyA. The observation of the bands at 23 and 27 kDa can be explained by cleavage of the thrombin linker due to accumulation of lysostaphin in the cytosol.

To demonstrate that our improved BioBrick BBa_K2812004 could be secreted, we performed another series of experiments. As documented on the part’s page, we secrete lysostaphin with E. coli ’s Type I secretion system. This requires the HlyB/D membrane protein. Since the pSB1C3 BioBrick plasmid and the pSTV plasmid containting the HlyB/D secretion proteins had overlapping antibiotic resistances, the BioBrick was assembled into a pBAD vector under control of an pBAD-ara promotor inducible by arabinose. E. coli BL21 (DE3) cells were transformed with both the HlyB/D plasmid and our newly assembled BioBrick plasmid. Both plasmids were then simultaneously induced. Additionally, CaCl2 was added, as this is required for Type I secretion. A co-culture of S. aureus or Streptococcus agalactiae with E. coli BL21 (DE3) on Mueller-Hinton agar plates was performed. The plates were covered with IPTG, arabinose and CaCl2 to induce our uninduced engineered E. coli bacteria to induce expression of lysostaphin-HlyA or HlyA and the HlyB/D secretion proteins. First S. aureus or Streptococcus agalactiae were plated on the inducer-agar. Subsequently, drops of uninduced BL21 (DE3) cultures were put on top of this film. The results can be seen in figure 3.

In 2.1 SA, clear halo formation around the BL21 (DE3) colonies can be observed, indicating secretion of lysostaphin having a lytic effect on S. aureus. 2.1 HSB clearly shows that on another Gram positive bacterial strain, lysostaphin does not show any antimicrobial activity. As a final control, BL21 (DE3) only expressing HlyA and HlyB/D (without lysostaphin), was co-cultured with S. aureus (see 2.2 SA). Around these E. coli colonies, no halo formation can be observed again illustrating that the lysostaphin component of the fusion proteins contains the lytic effect selectively against S. aureus, and HlyA is not toxic. Due to the old BioBrick BBa_K748002 not having a secretion tag, secretion would not have been possible even in the presence of the secretion system. Moreover, our initial protein expression experiments on BBa_K748002 did not demonstrate any lysostaphin production. There would not have been anything to secrete. Therefore, there would have been nothing to compare and this experiment was not performed.

In conclusion, our codon optimisation improved the expression of the lysostaphin domain considerably as we observed convincing lysostaphin production. In contrast, the original BioBrick did not show any protein production. However, in our eyes the most valuable functional improvement of this part over BBa_K748002 is the ability of lysostaphin to be secreted, which is obviously not possible for the BBa_K748002 part lacking the HlyA domain. Additionally, the use of cell lysis to release lysostaphin is no longer required, functionally improving the truncated lysostaphin construct from iGEM Harbin 2012 which required cell lysis for release in their system. Besides release, isolation of lysostaphin with this newly designed construct is also easier as purification can be performed directly from the medium, avoiding the requirement of cell lysis and decreasing purification problems.