The Circadian Clock in Synechococcus elongatus

In Synechococcus elongatus, the oscillator is composed of only three proteins KaiA, KaiB, and KaiC, which together generate the circadian rhythm of KaiC phosphorylation at residues serine 431 (S431) and threonine 432 (T432) in the CII domain. KaiA promotes KaiC (auto)phosphorylation during the subjective day, whereas KaiB provides negative regulation to inhibit KaiA and promotes KaiC (auto)dephosphorylation during the subjective night.[1]The 24-h KaiC phosphorylation pattern can be reconstituted in vitro by merely combining the three Kai proteins and ATP, suggesting that the oscillating system is a post-translational oscillation system. KaiA and KaiB are also involved in regulating two antagonistic clock-output proteins—SasA and CikA, which reciprocally control the final regulator of transcription, RpaA.

Molecular changes in the KaiABC circadian clock system: Stepwise binding of two KaiA dimers triggers KaiC autophosphorylation at Thr432 and Ser431. These phosphorylation events enable cooperative binding of fold-switched KaiB monomers to the KaiC-CI domain, forming the KaiBC complex. KaiBC provides a scaffold for the successive sequestration of KaiA in ternary KaiABC assemblies, concurring with a rearrangement of the KaiA PsR domains. KaiA sequestration promotes KaiC autodephosphorylation, resulting in the regeneration of free KaiC through release of KaiAB subcomplexes. [2]

Temporal information from the oscillator is transmitted to downstream genes via the histidine protein kinase SasA (Synechococcus adaptive sensor A), whose autophosphorylation is stimulated by interaction with KaiC. Phosphorylated SasA in turn transfers a phosphoryl group to RpaA (regulator of phycobilisome association A) , a transcription factor that directly regulates the expression of approximately 100 genes. Moreover, RpaA indirectly regulates the expression of nearly all genes in the genome.[3]Disruption of sasA also results in severely damped gene expression rhythms. CikA acquires the ability to dephosphorylate RpaA by interacting with the KaiBC complex and acts on downstream genes via RpaA to complete the subjective night biochemical reaction. 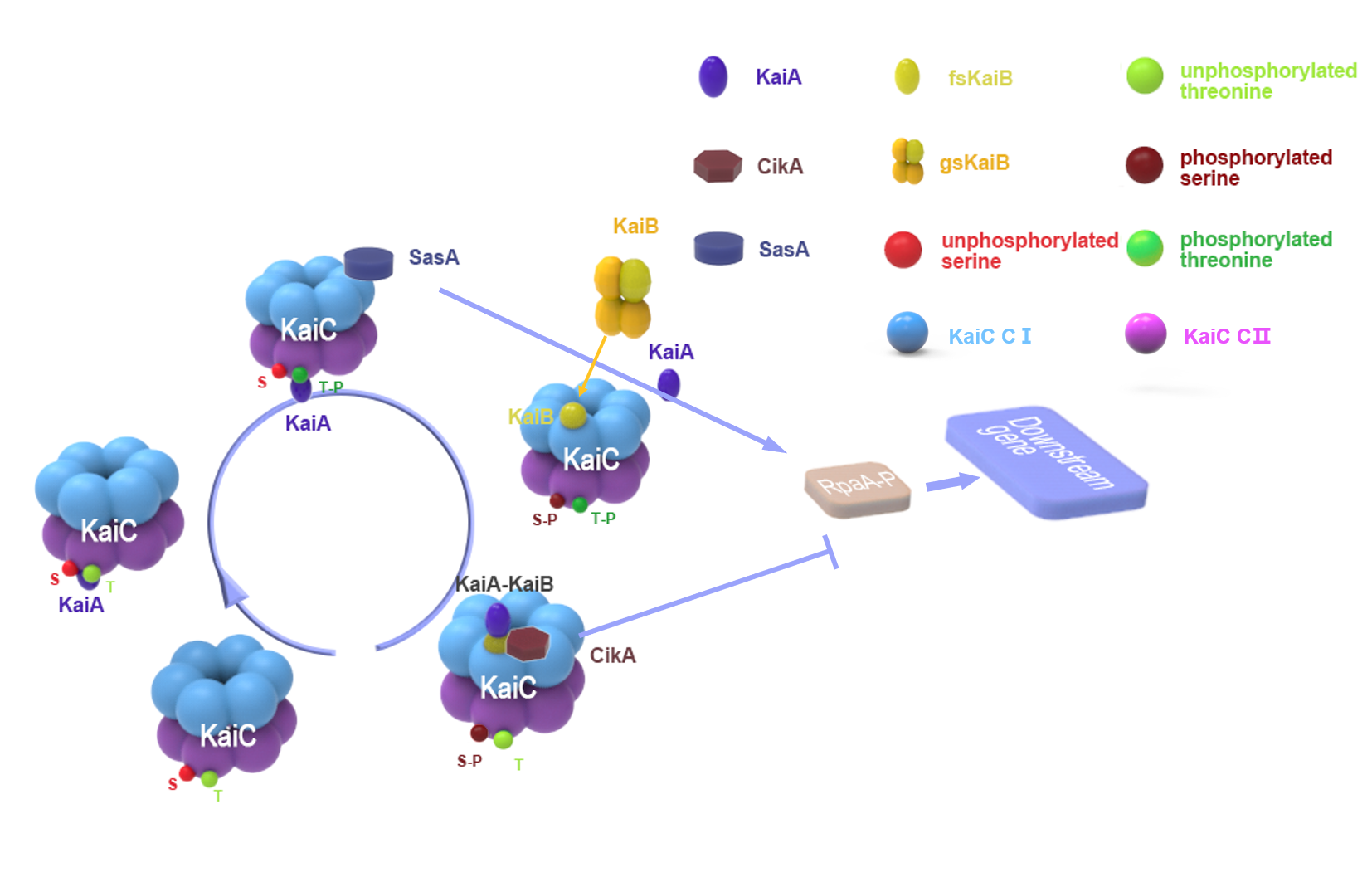 Figure 1 | The mechanism of Circadian Clock in Synechococcus elongatus

1.What is Yeast Two-Hybrid System?

Yeast two-hybrid system was put forward by Fields in 1980 according to his research about the transcription factor Gal4. Gal4 contains two separated but essential domain which is called AD (activation domain) and BD (binding domain). BD is located at 1-147 amino acid at N terminal of Gal4, which can recognize and bind to the upstream activation sequences (UAS) of effector genes of Gal4 and AD is located at 768-881 amino acid at C terminal of Gal4, which can act on some transcription factors such as SAGA ( Spt-Ada-Gcn5-Acetyltransferase complex)、TBP (TATA-box binding protein)、TFIIB (Transcription Factor IIB), thus promoting the transcription of downstream genes. Gal1 promoter and Gal2 promoter, which can be controlled by Gal4, are chosen as the promoters of downstream genes. [4-7] 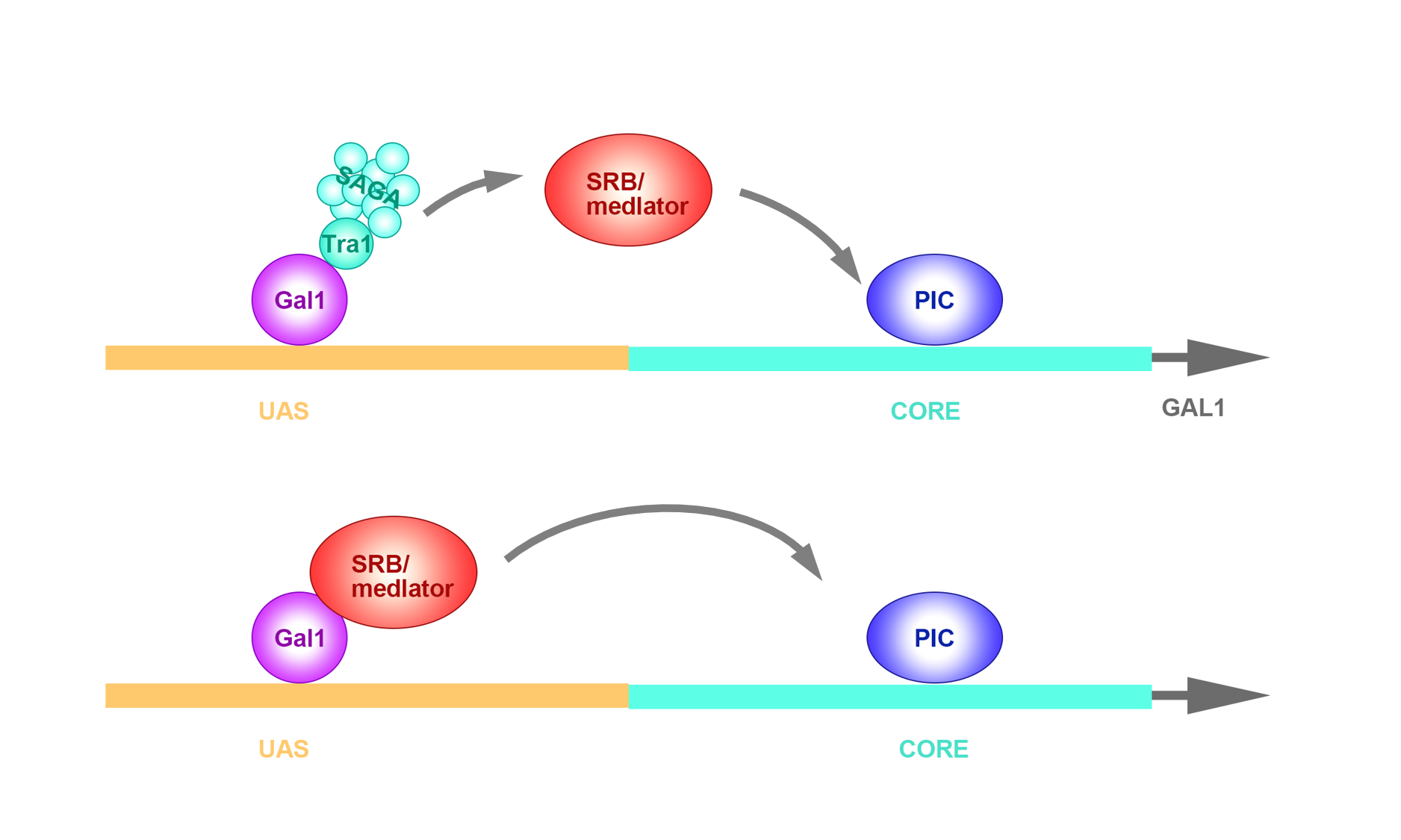 2.How does Yeast Two-Hybrid System Work?

This system is often used to explore interactions between proteins and proteins, proteins and RNA, proteins and organic small molecule ligand. Usually, two proteins to be studied are fused with AD and BD respectively. The protein fused with BD is called “bait” and the protein fused with AD is called “prey”. When bait and prey combine with each other, it will make AD and BD spatially close enough. Thus the downstream genes will express. On the contrary, when bait and prey can’t combine, the downstream genes won’t express. [4] 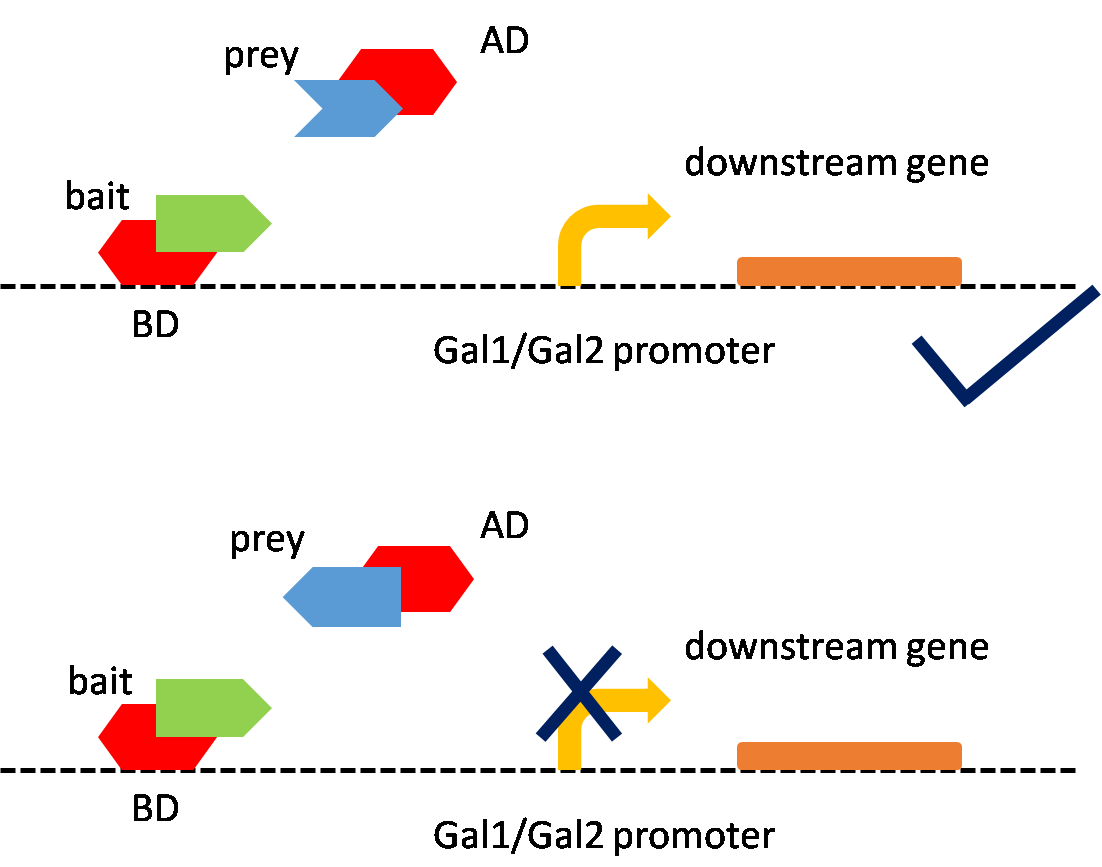 All the galactose structural genes (GAL1, GAL10, GAL7, GAL2) are coordinately regulated at the level of transcription in response to galactose by Gal4, Gal80, and Gal3. In the presence of galactose, Gal3 sequesters the transcriptional repressor Gal80p in the cytoplasm, thereby relieving inhibition of Gal4 and resulting in GAL  gene expression. In the absence of galactose, Gal80 remains bound as a dimer to Gal4, preventing Gal4 from recruiting other factors of the Pol II transcription machinery. When cells are grown on glucose, GAL1 and GAL2 is negatively regulated by catabolite repression at both the levels of transcription and protein degradation. Whatever the carbon source is, the Gal4 transcriptional activator is bound as a dimer to UAS(upstream activation sites) found in the promoters of the GAL  genes. In general, Gal4 and Gal80 can act on Gal1 promoter and Gal2 promoter directly while Gal3 only can act them through Gal80. Besides, Mig1 and Sip1 can downregulate the expression of GAL2 and GAL1 respectively. [11-23] 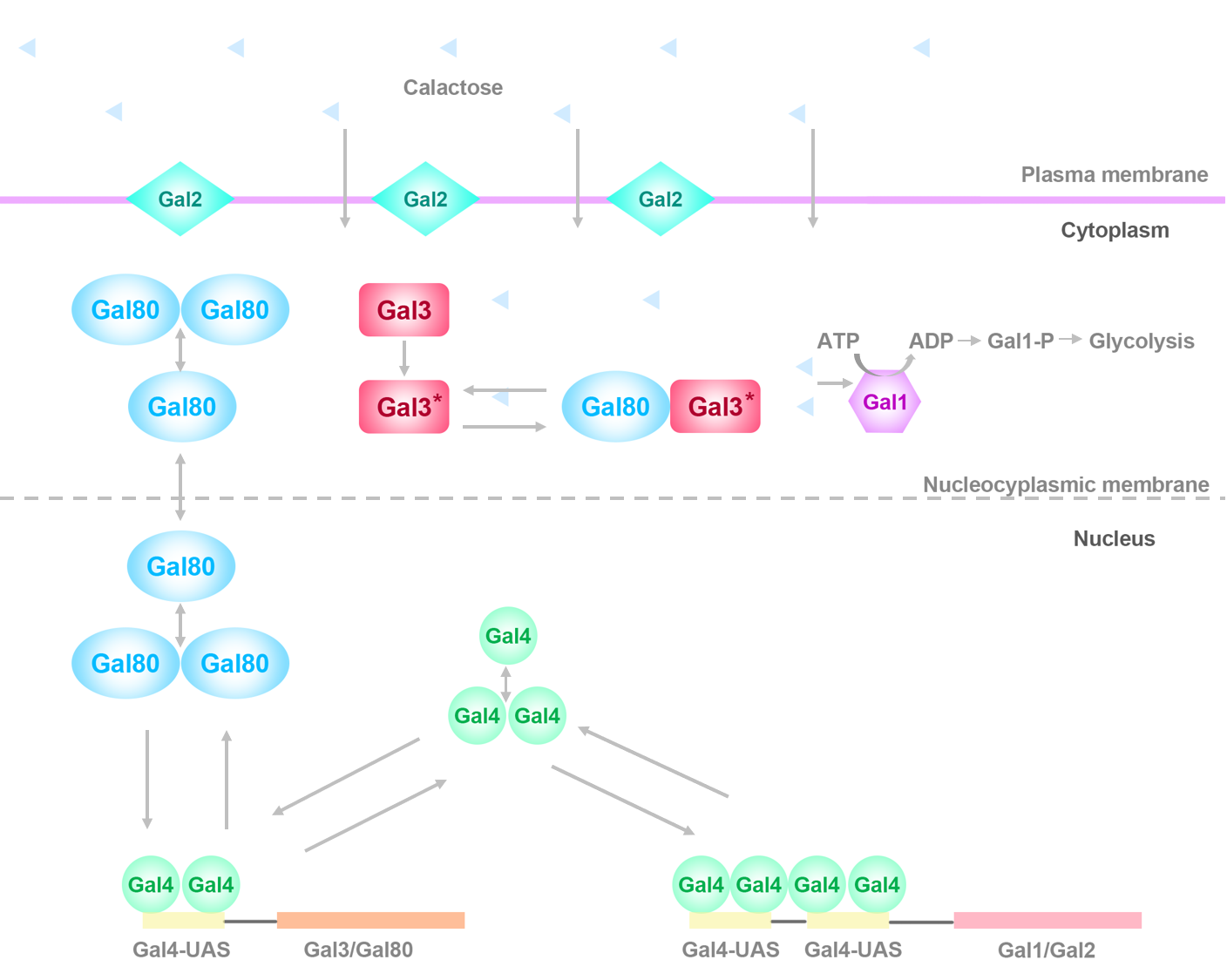 We choose three periodically combined proteins to construct three sets of combinations. They are KaiC-SasA、KaiC-CikA、KaiC-KaiB respectively. During the subjective day, KaiC will combine with SasA. While during the subjective night, KaiC will combine with KaiB and CikA. Therefore different combinations will express their downstream genes at different times. [25]

Thanks to the instruction books of Clontech, we know many experimental details about yeast two-hybrid system. First of all, we know that the false positive problem is the biggest problems of yeast two-hybrid system to some degree.To decrease the influence of that problem, we take many measures. For example, we set up negative control groups which only includes AD or BD and we choose the mutated Gal1 promoter which is synthesized by GeneScript according to the sequence of part:BBa_K801004. Since the false negative problem isn’t a big problem, we ignore it and don’t set up the positive control group including two proteins which can combine surely. Besides, we know that the strain to be used for yeast two-hybrid experiment should be knocked out GAL4 and GAL80 genes. Based on these information above, we knocked out GAL4 and GAL80 genes of our experimental strains through CRISPR-Cas9. The strains without GAL4 and GAL80 genes are named after d-two.

Chromatin remodeling refers to that the molecular state of chromatin packaging, the histones in nucleosomes, and the corresponding DNA molecules will transform in the process of replication and recombination of gene expression.

This remodeling is mainly through two approaches. First, this could be attained by covalent histone modification of specific enzymes, just like histone acetyltransferase (HATs), deacetylase, methyltransferase, and kinase. Specifically, it refers to the addition or removal of various chemical elements on histones under the catalysis of a specific protein complex called a histone modification complex. These enzymatic modifications include acetylation, methylation, phosphorylation, and ubiquitination occurring primarily at the N-terminal tail of histones. Furthermore, these modifications exert effect on the binding affinity between histones and DNA, thereby loosening or tightening the concentrated DNA surrounding the histones. For example, methylation of specific lysine residues in H3 and H4 leads to DNA being further combined with histones which deters transcription factors from binding to genes inhibiting the expression of DNA. In contrast, histone acetylation relaxes chromatin and exposes DNA to bind to transcription factors, giving rise to increasing gene expression.[26][27][28][29]

This remodeling is mainly through two approaches. First, this could be attained by covalent histone modification of specific enzymes, just like histone acetyltransferase (HATs), deacetylase, methyltransferase, and kinase. Specifically, it refers to the addition or removal of various chemical elements on histones under the catalysis of a specific protein complex called a histone modification complex. These enzymatic modifications include acetylation, methylation, phosphorylation, and ubiquitination occurring primarily at the N-terminal tail of histones. Furthermore, these modifications exert effect on the binding affinity between histones and DNA, thereby loosening or tightening the concentrated DNA surrounding the histones. For example, methylation of specific lysine residues in H3 and H4 leads to DNA being further combined with histones which deters transcription factors from binding to genes inhibiting the expression of DNA. In contrast, histone acetylation relaxes chromatin and exposes DNA to bind to transcription factors, giving rise to increasing gene expression.[26][27][28][29]

Second, ATP-dependent chromatin remodeling complex could move, eject or reconstruct nucleosomes to achieve the aim of remodeling. These protein complexes share a common ATPase domain, which can relocate the position of the nucleosome on the DNA by utilizing the energy of ATP hydrolysis to keep the histone away from DNA or promote the exchange of histone variants, thereby producing nucleosome free the DNA region which will activate the expression of DNA. In addition, some remodeling complexes have DNA translocation activity and can perform specific remodeling tasks. Currently we konw that there are at least five chromatin remodeling families in eukaryotes: SWI / SNF, ISWI, NuRD / Mi-2 / CHD, INO80 and SWR1. Although all remodeling complexes share a common ATPase domain, their function is based on several specific biological processes, just like DNA repair, apoptosis, and so on. This is due to the fact that each remodeling complex has a unique protein domain in its catalytic ATPase region and also has different recruitment subunits.[30][31] 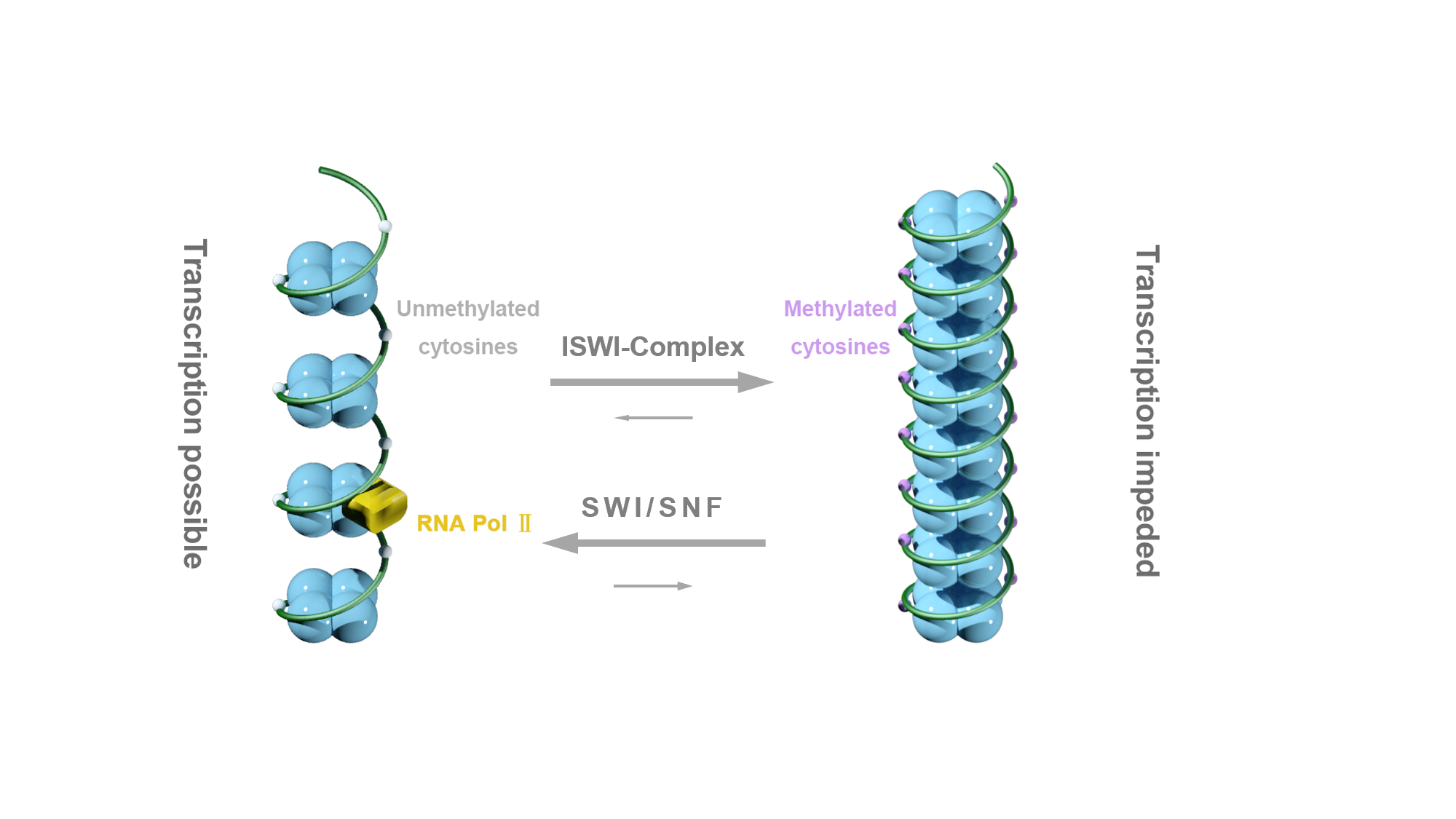 Figure 6 | The mechanism of chromatin remodeling

Therefore, in our project, we selected two types of chromatin remodeling families: SWI / SNF and ISWI to substitute the reporter as the downstream proteins, since these two families have been well studied, especially in the yeast model.

Our Saccharomyces cerevisiae incorporated the heterogeneous KaiABC circadian clock from cynaobacterium Synechococcus elongatus. Once KaiC combined with SasA, the downstream genes initiate expressing by utilizing the yeast double- hybrid system. And due to the fact that the tightness of these two proteins’ combination will change over time, the amount of genes’ expression will alter accordingly. Since we substituted the genes of SWI / SNF and ISWI for the downstream genes, we could eventually measure the growth curve and observe the shapes of cells which have been modified by use of the Flow cytometry to find out if these modifications had periodic effect on the Saccharomyces cerevisiae.

Unfortunately, due to the limited time and punishing experiments, there leaves us no time and no energy to complete our whole expected experimental tasks, especially the experiments involving the part of chromatin remodeling, for which we pin our hope on the researchers in related fields or who interests in this to continue to study in depth and ultimately make the conclusion one day.

[12]Kristy M. Hawkins and Christina D. Smolke 1,et al.The Regulatory Roles of the Galactose Permease and Kinase in the Induction Response of the GAL Network in Saccharomyces cerevisiae.DOI：10.1074/jbc.M512317200

[19]Peng G and Hopper JE,et al. Gene activation by interaction of an inhibitor with a cytoplasmic signaling protein. Proc Natl Acad Sci U S A 99(13):8548-53

[21]Horak J and Wolf DH,et al. Catabolite inactivation of the galactose transporter in the yeast Saccharomyces cerevisiae: ubiquitination, endocytosis, and degradation in the vacuole. J Bacteriol 179(5):1541-9