Butyrate plays multiple critical roles in shaping host immune responses and is involved in the amelioration of colonic disease pathologies. Formation of short chain fatty acids occurs through anaerobic fermentation of dietary fibers in the colon by specific gut microbiota. Of these metabolites, butyrate is known to beneficially regulate the adaptive immune response. Colonic butyrate ameliorates animal models of inflammatory bowel disease (IBD). Butyrate can also prevent growth and induce apoptosis in colon cancer cells while paradoxically causing normal intestinal epithelium to proliferate, something few pharmacotherapies are able to do.

Our chassis strain for this project is Escherichia coli Nissle 1917. It is the only probiotic recommended by the European Crohn’s and Colitis Organization to be used as an alternative treatment for ulcerative colitis. It has also been used by several iGEM teams whose focus was an engineered probiotic for biomedical application due to its low immunogenicity and high receptiveness to genetic engineering. The wild-type bacterium does not naturally produce significant levels of butyrate; this is a property we wish to engineer. The overall goal of our project is to overproduce butyrate in a chassis that could not produce this metabolite before. We were inspired by METU HS ANKARA 2016, Toulouse 2015, and NRP UAE Norwich 2015 in their attempts to produce butyrate with biobricks. Ultimately, none of these teams made a redox balanced and optimized butyrate pathway. We believe that optimizing the flow of carbon is the key to success which greatly influenced our project design.

To optimize butyrate production we planned to insert the correct pathway into E. coli Nissle and use gene deletions to get rid of offshoot pathways that direct carbon flow away from the endpoint. Metabolic engineering was initially intended to help those suffering from diseases of the gut, but The Ferminator is not limited to fighting off biological villains! Beyond the scope of therapeutics, butyrate can be used as an industrial precursor to biofuels and has many implications in space exploration. This SCFA is very important due to its extensive health and biochemical characteristics. The creation of a microbe that can be induced to produce abundant amounts of a beneficial metabolite is our primary ambition. Once this goal is reached, this symbiont can be streamlined to enhance and progress many fields of work including therapeutics, industry, science, and engineering. 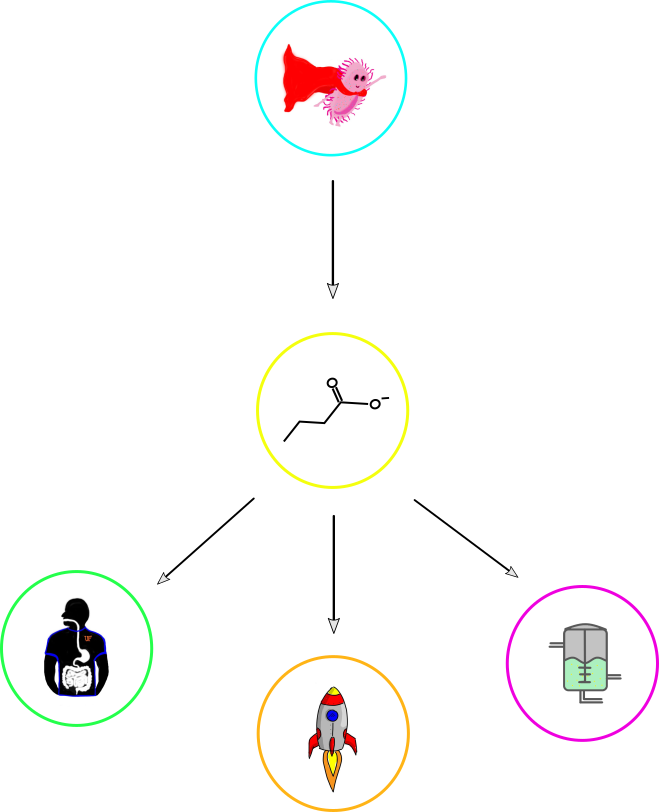 IBD is an overarching term for both Crohn’s disease and ulcerative colitis, which can cause diarrhea, weight loss, fever, abdominal pain, and fatigue. The causes for these diseases are unknown; however, previous research has linked butyrate with relief of these symptoms. Our engineered bacteria could serve as the basis for a therapeutic that introduces butyrate into IBD patients. Our belief is that upregulation of butyrate throughout the GI tract could provide many benefits for patients.

This model could also be used in the development of a therapeutic to treat colon cancer. Butyrate has been shown to induce apoptosis of colon cancer cells while leaving normal intestinal tissue intact. Introducing an affinity to bind cancerous cells may optimize the known anti-cancer effects of butyrate production. This hypothesis assumes that facilitating proximity to targeted colon cancer cells will increase the effective therapeutic butyrate concentration in the cancer cell microenvironment to induce apoptosis.

Directed evolution can be used to create biosynthetic pathways, and previous research has shown that this technique can be used to produce a variety of chemicals. Butyrate itself is involved in the production of biofuels and has the potential to make many of our common industrial practices significantly more efficient. As our world faces a sustainability crisis, researchers are working to find alternative fuel sources. One promising use of butyrate is to produce butanol, which can hypothetically replace ethanol and other fuels. Using our engineered bacterium to streamline butanol production could be a step towards solving the world’s energy crisis.

Our engineered strain could also lead to major advancements in the capabilities of space travel. Periods of living in space can take a significant toll on the human body, including a large impact on gut microbiome health that arises from both physical and mental stress. Over the course of longer-term stays, astronauts can suffer a great deficit in gut butyrate production. There is potential to develop a butyrate probiotic specific for space exploration that will keep astronauts’ gut microbiomes balanced and healthy.

Beyond its probiotic benefits, the industrial capabilities of butyrate also come into play in space. In terms of cargo space, it is far easier to bring a supply of bacteria on a spacecraft than it is to bring medical treatments or large amounts of biofuel. Our model has potential to be applied here, and development of methods for synthesizing these in space could revolutionize the space industry.

The theme of our project came about through a collective manner of word play. By combining a common procedure of our day-to-day lab work (fermentation), our university's mascot (the Gators), and an award-winning film series starring Arnold Schwarzenegger ("Terminator"), we called our project "The Ferminator." The simple idea of “The Ferminator” is a genetically modified bacterium that produces butyrate. Butyrate, a well known treatment for most diabolical ploys, will be used to stop biological villains from overthrowing the gut microbiome. Pictured below is our main character in this superhero theme. 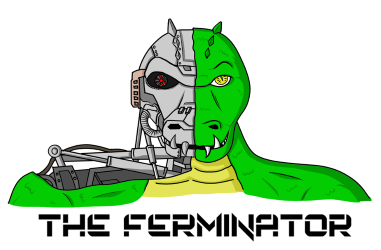