Potential as a Therapeutic Probiotic

We interviewed Dr. Ellen Zimmerman to discuss our project and obtain her feedback regarding our design and the ultimate goal that our probiotic could achieve. Dr. Zimmerman is a gastroenterologist who also performs research pertaining to IBD and Crohn's disease. She was very excited to hear that we were pursuing bioengineering to unleash the potential therapeutic effects of butyrate in patients with inflammatory bowel disease and colorectal cancer. She informed us that "many patients with serious inflammatory diseases are known to have low butyrate producing bacteria... While repairing the microbiome has not been made possible yet, filling in the gaps with essential metabolites might as well allow for therapy."

This highlights the potential of butyrate as a therapeutic because “butyrate is considered a good guy in most settings" and is not known to induce adverse effects. Finally, she said that, as a physician, she has to ensure her patients can maintain balance in their lives in order to manage their symptoms, and diet is a key player in the game of balancing. She said that "if there were a probiotic that could alleviate the painful symptoms of these inflammatory diseases allowing patients to function with minimum inhibitions, many patients would be willing to try it despite the stigma that seems to revolve around GMOs. Once success of treatment is well documented, the patients will pursue it to relieve their symptoms." This statement gave us hope and a perspective that this project can serve as a stepping stone towards treatment opportunities. Dr. Zimmerman was impressed with the project goal and encouraged us to pursue the idea of a probiotic that can be used for therapy with minimal to no side effects. Her enthusiasm and support of our project goal encouraged us and strengthened our resolve towards the project goal.

From these conversations, we also made a key modification to the design involving colon cancer. Our initial idea to relieve cancer symptoms was to insert a heme-inducible promoter in our bacteria that would sense bleeding in the gut. The thought process was that by recognizing the presence of blood, the bacteria would be induced to release microcins. Microcins are naturally-produced bacterial metabolites that are able to kill other bacteria. We wanted to limit the probability of opportunistic pathogens escaping a leaky gut and causing sepsis in the patient. However, Dr. Zimmerman warned that this method would not be likely to produce enough microcins to be therapeutic, so we took a look in the iGEM registry. Harvard BioDesign 2015 had the answer. After combing the iGEM registry, we found a way to attempt to optimize the probiotic range of our bacterium with the addition of their fimH BioBrick BBa_K1850001. More information about this can be found on the Design page.

One interesting application of our probiotic was explored through meeting with Dr. Amor Menenzes from our school’s Department of Mechanical and Aerospace Engineering. Dr. Menenzes specializes in systems biology and biological controls, like the creation of feedback loops. He originally guided us in producing a model for our butyrate metabolic system. In exchange, our team gave a presentation about the astronaut microbiome during one of his class lectures. One of the points covered when talking to Dr. Menenzes was the need to test bacteria on Earth before sending it up into space. This would be achieved by replicating a microgravity environment in instruments like High Aspect Rotating Vessels (HARVs). The culture vessel is completely filled with fluid and spins perpendicular to the plane of gravity. Cells become essentially buoyant as they continually "free fall" and can avoid high shear stress that would cause cellular damage or impair growth. Microbes can behave differently in such conditions, primarily due to the negative impact on gravity-driven transportation processes. Although this is not a true anti-gravity experience, microgravity still allows researchers to predict the fate and functionality of microbes in space. 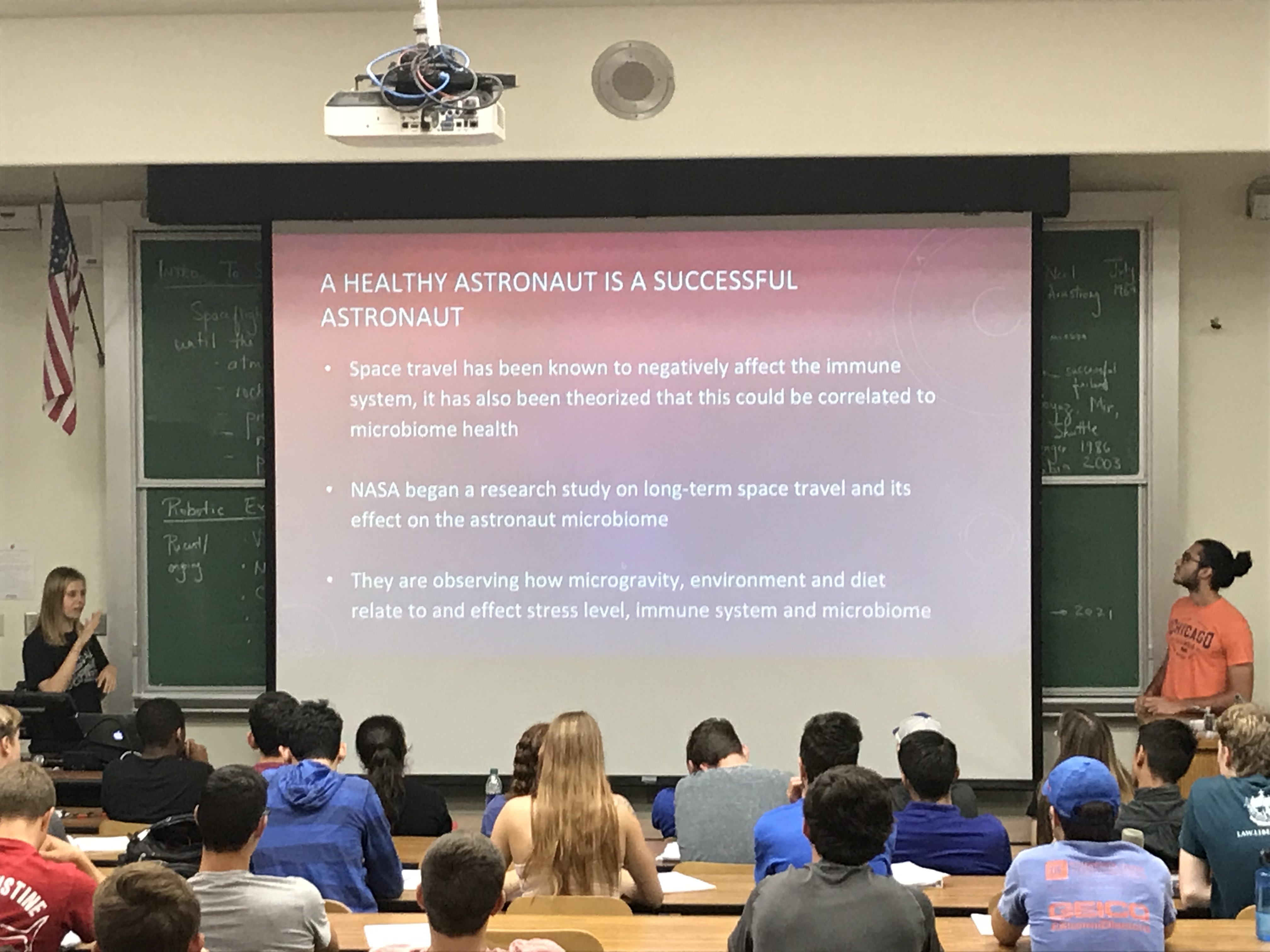 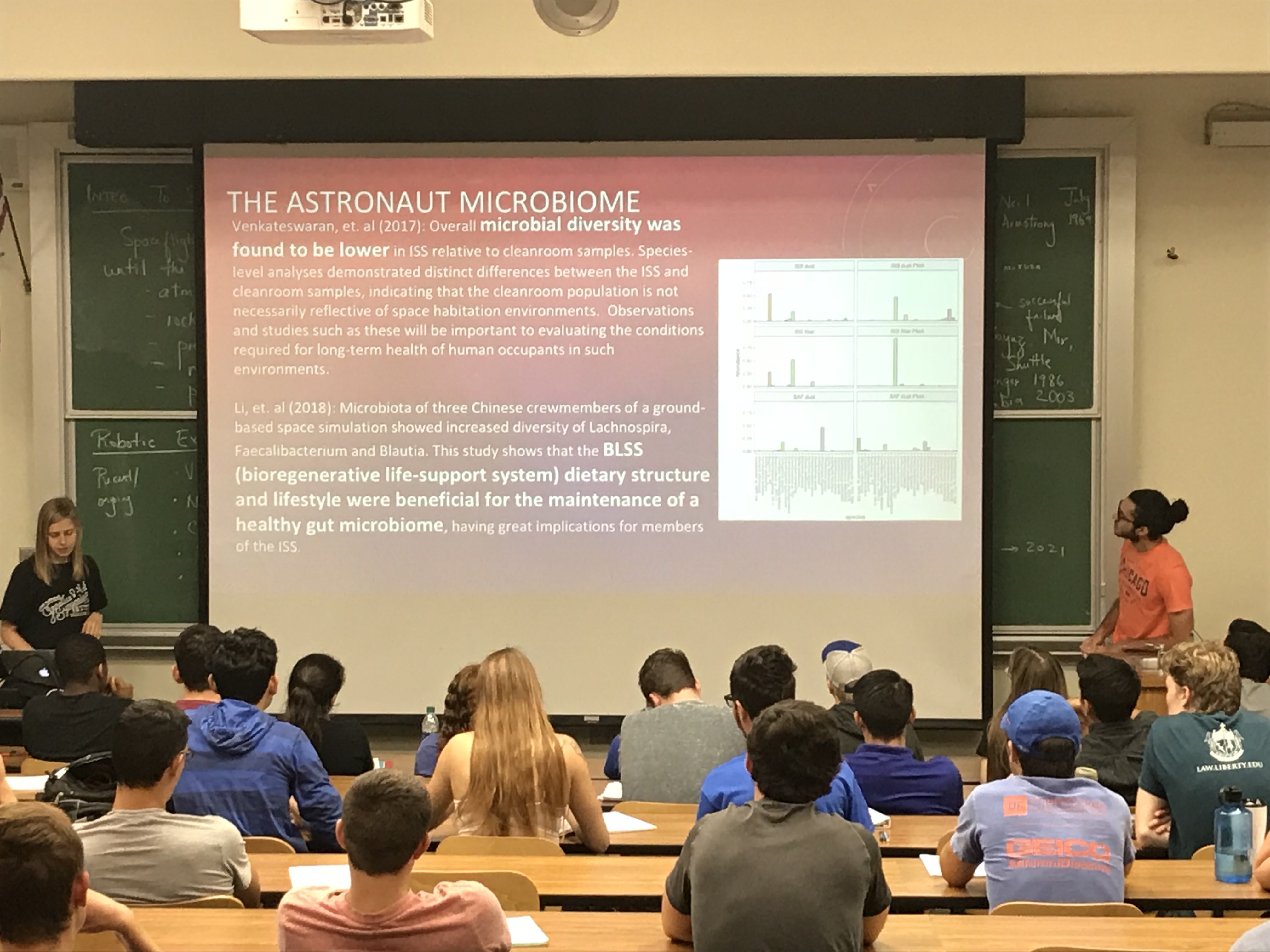 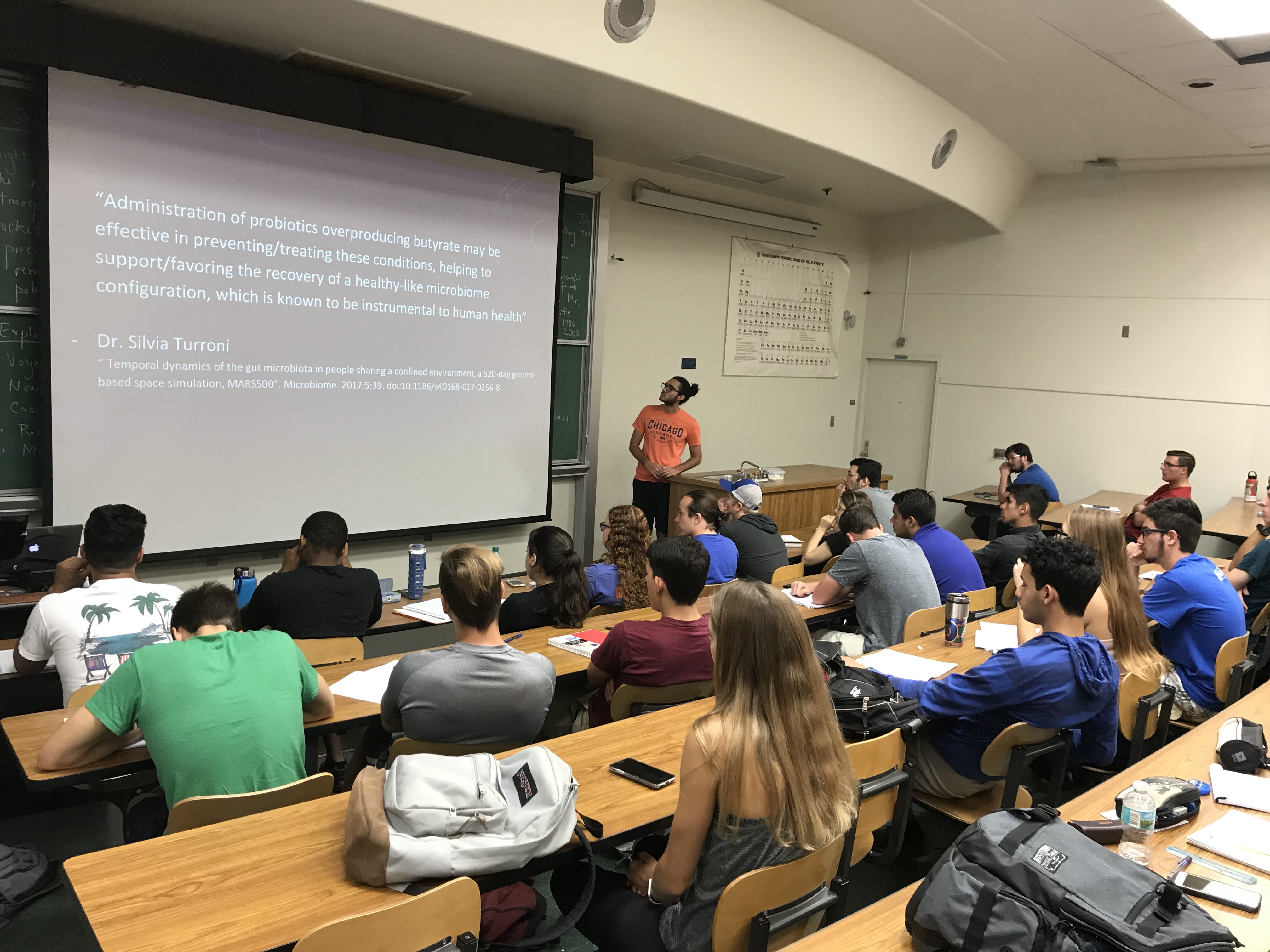 Using the power of bacteria in space is not a novel concept; the potential for microbes to create hospitable life conditions outside Earth’s atmospheric boundaries is an ongoing quest. There is an expanding field of study concerning the use and feasibility of probiotics on the International Space Station. There has also been research on the change in bacterial populations of the gut microbiome in volunteer individuals living in a confined environment that simulated space living conditions. The human body reacts differently in space, and the population dynamics of microbes species fluctuate. To learn more, we corresponded with Dr. Silvia Turroni, a primary investigator of the study "Temporal dynamics of the gut microbiota in people sharing a confined environment, a 520-day ground-based space simulation."

In your opinion, what is the usefulness of a probiotic bacteria to overproduce butyrate in space/on Mars?

"I believe that probiotics overproducing butyrate can be of great use during space missions. Butyrate is indeed recognized as a microbial metabolite (resulting from microbiota fermentation of fibers – otherwise said Microbiota Accessible Carbohydrates (Sonnenburg and Sonnenburg, 2014) with a key, multifactorial role in our physiology. Acting as histone deacetylase inhibitor and/or ligand of GPCRs, it impacts on our metabolic (just think about the role in energy extraction and storage, and appetite control), immunological (with an overall anti-inflammatory activity) and neurological (with modulation of the enteric and peripheral nervous system) homeostasis."

Would the gut microbiome of an astronaut benefit from ingesting the probiotic in necessary circumstances?

"As observed in MARS500, a 520-day ground-based space simulation (Turroni et al., 2017), butyrate producers of the gut microbiome may undergo significant fluctuations during the stay in space modules, with important repercussions on human health. In particular, Faecalibacterium prausnitzii (a butyrate-producing bacterial species with anti-inflammatory and immunomodulating properties, recently proposed as next-generation probiotics) was found to be strongly reduced in relative abundance around about 1 year of confinement, when psychological and biochemical data were consistent in highlighting stressful circumstances, with negative feelings, high salivary levels of cortisol, increased immune responses, and positivity to the calprotectin test (used as a fecal marker of inflammation). In other words, the administration of probiotics overproducing butyrate may be effective in preventing/treating these conditions, helping to support/favoring the recovery of a healthy-like microbiome configuration, which is known to be instrumental to human health."

What sort of circumstances would you deem necessary?

"As mentioned above, circumstances that imply a strong stress for astronauts, both physical and mental, could involve alterations of the gut microbiome and therefore benefit from the administration of probiotics, aimed at restoring balanced (i.e. eubiotic) microbial configurations with health-promoting effects."

What are some important precautions?

"Of course, we must proceed with caution. For example, we do not know whether the microbiota alterations observed in our study also occur in real flights and can actually be manipulated, and what are the butyrate threshold levels to obtain the specific effects mentioned above. Not least, the picture is complicated by the fact that the complex microbiota-host and microbe-microbe interactions are still far from being understood. Research in this direction must be encouraged!"

Our human practices did not focus on the necessary safety and FDA standards required to commercialize our probiotic. Instead, we gathered knowledge concerning the potential response that could come about if it was available to key demographics. This included individuals with diseases originating in the gut and travelers in space. We learned that a butyrate probiotic had the potential to relieve symptoms and be accepted as a therapeutic by patients. Our project design was additionally discussed and modified to create a more efficient killer of cancer cells. Further extensions of our planned bacterium in an entirely different environment were discussed but not tested in time. However, the points brought up in this research made it evident that using a HARV to culture our bacteria would be the next step in our project design if we were to pursue a space-biotic application. In the future, we would need to take our engineered probiotic and compare butyrate production between the Earth and microgravity environments. In addition, we would have to experimentally determine the metabolic levels of butyrate needed to be taken as a therapeutic alternative or reliever of disease symptoms. In terms of biofuel extension, safety testing would not be as constrained however examination of changes in virulence would still be crucial.