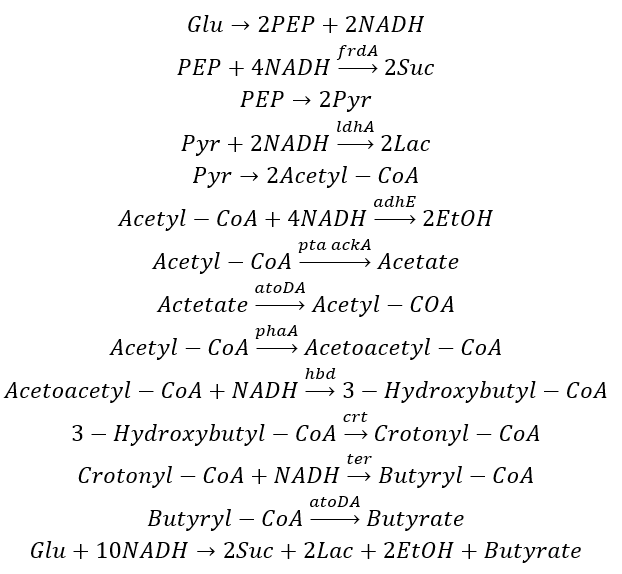 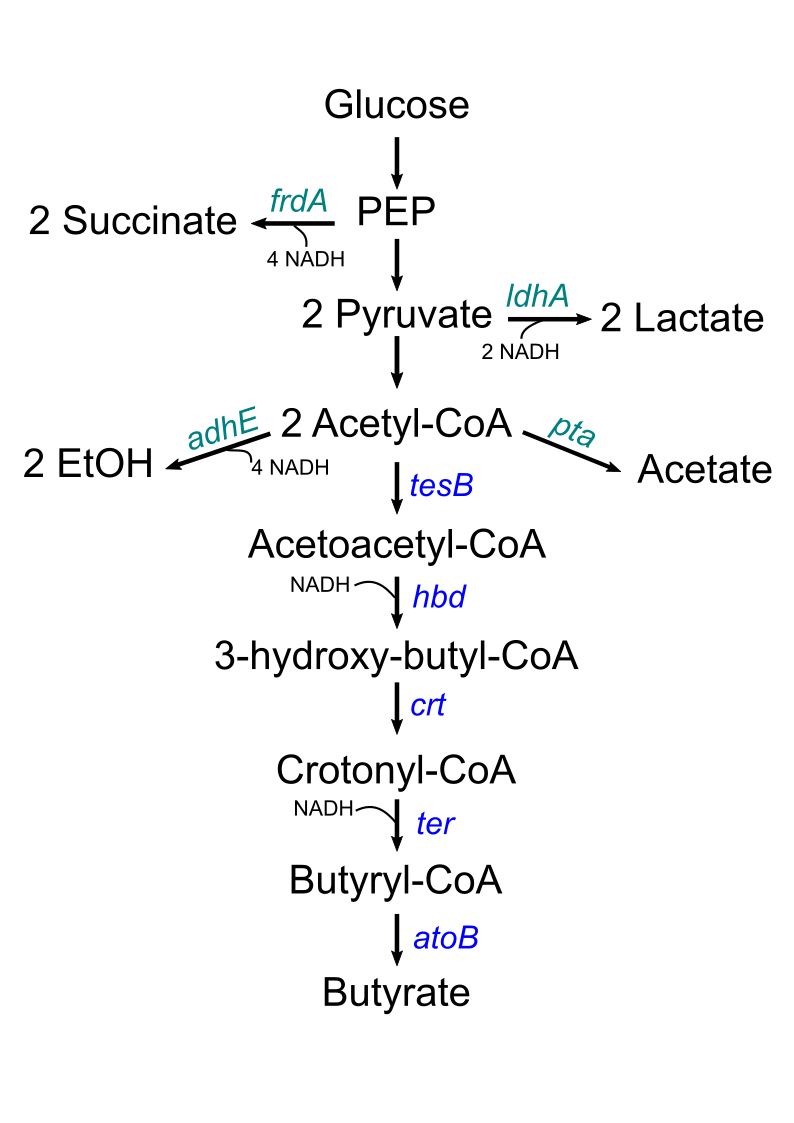 This is what our model initially predicted with unregulated butyrate pathway enzymes. However, a duplicate of the frdA gene was found during deletion, so the gene remained. As a result, the focus narrowed to the deletion of the ldhA gene and its effect on other enzymes. Fig. 4 displays the hypothesized ratios and concentrations of each compound through the singular ldhA deletion process, similar to Fig. 2. Since only ldhA is deleted, all the NADH to produce lactate will have shifted to produce ethanol and butyrate. The rates of succinate and ethanol are estimated to be similar as they both require the same amount of NADH to produce their enzymes. In this idealized system, all the glucose will be used as well. Fig. 5 represents said concentrations, comparing the ldhA deletion with initial production where no gene is deleted. 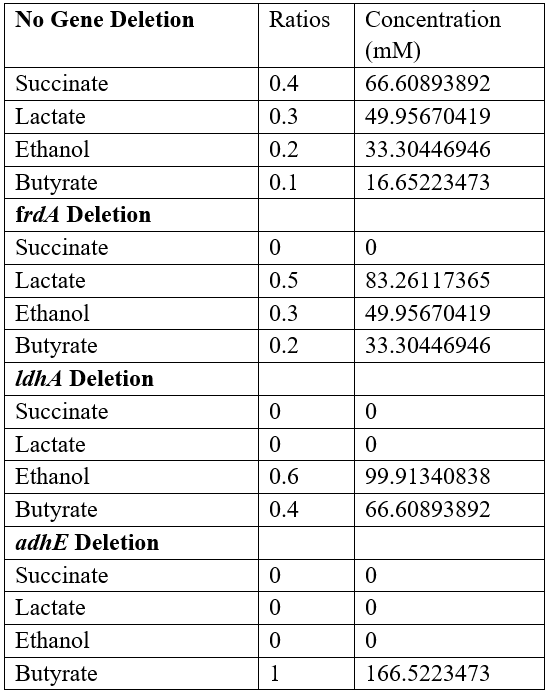 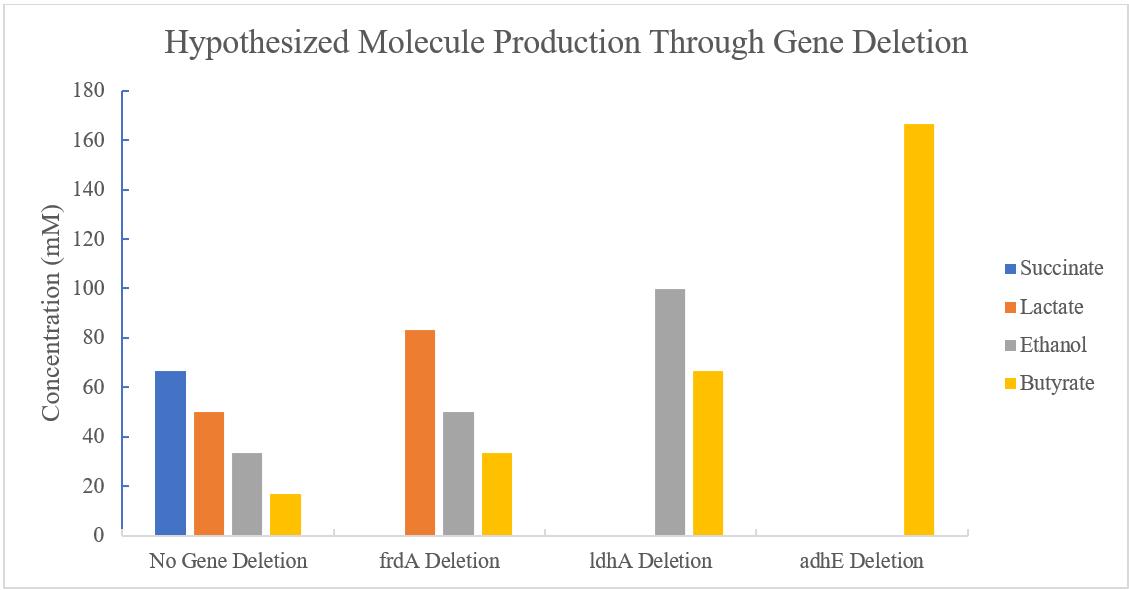 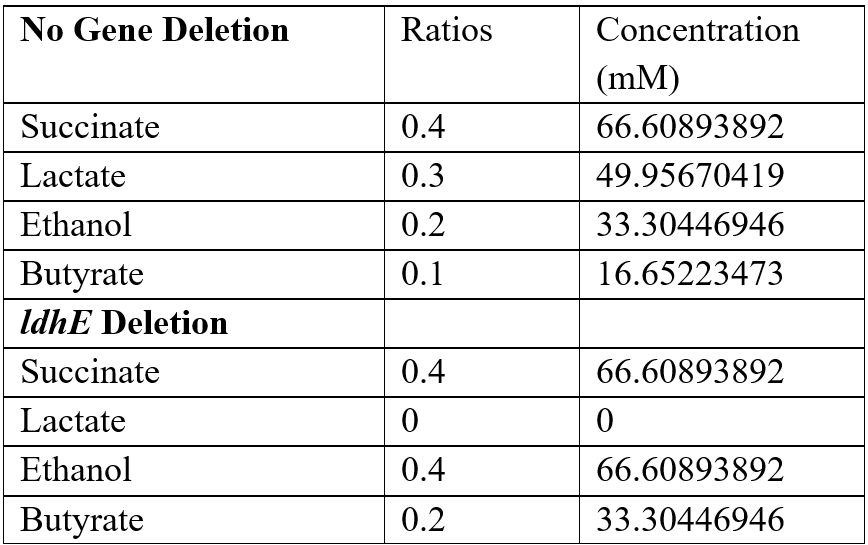 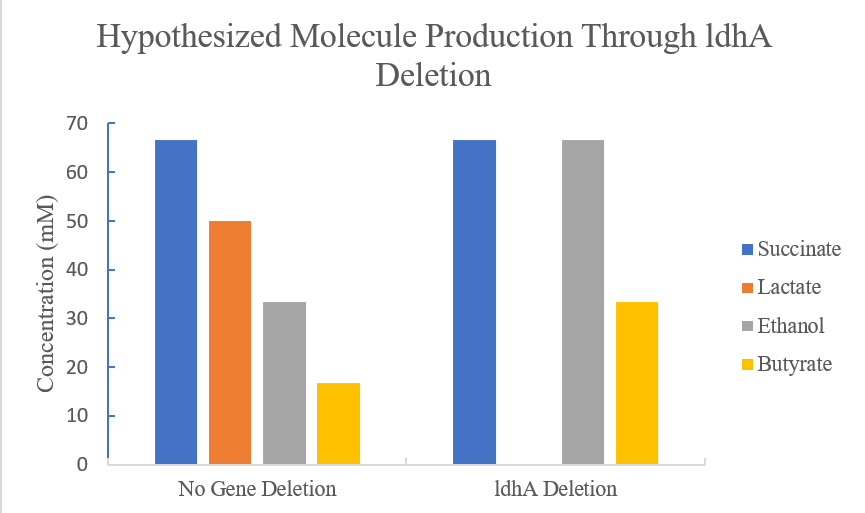 After initial data was taken, the models were adjusted to take into account the time required for the enzymes to react as well as other various compounds that were formed. HPLC produced data taken from cultures where no genes were deleted, resulting in the production of all enzymes. Based on this data, Fig. 6 was created demonstrating the concentration of enzyme production over time with continual use of glucose. Fig. 7 tabulates the data. The rates are assumed linear, based on the concentration values at certain time periods. For example, for ethanol the rate of production is 0.485 mM/min derived by the 15.65 mM concentration read at 32.3 minutes. It is also assumed the initial concentration of glucose is 166.5 mM, and the concentrations of enzymes are zero at zero minutes. It can be concluded that most of the glucose forms in other compounds, but butyrate still forms. 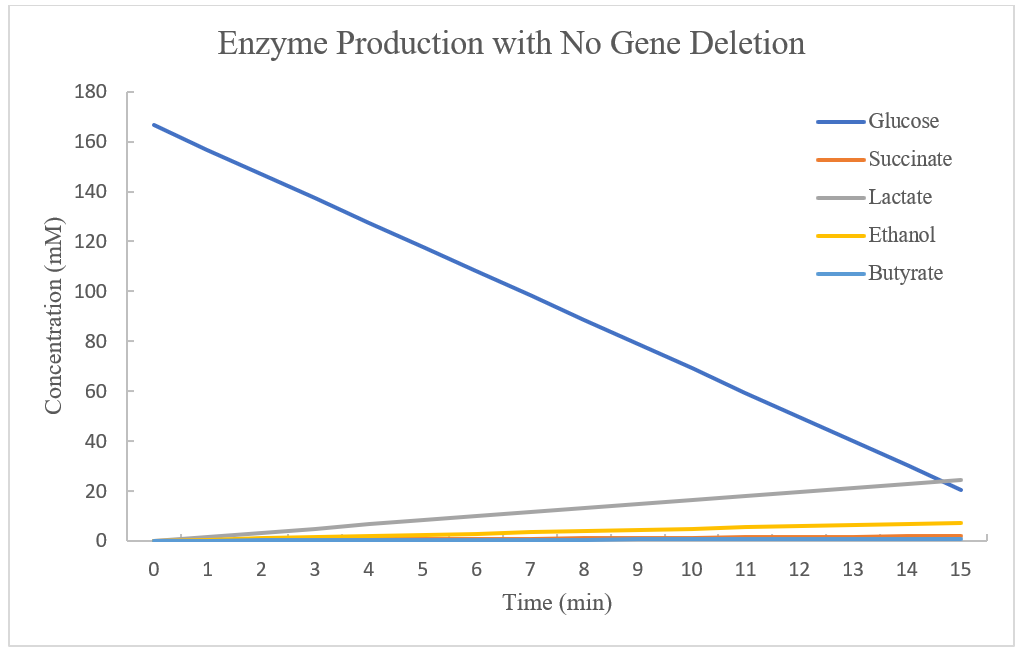 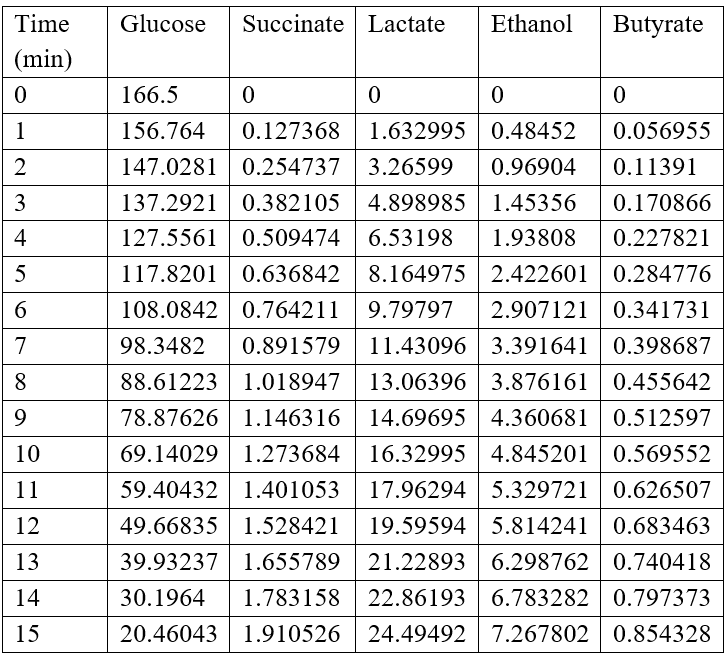 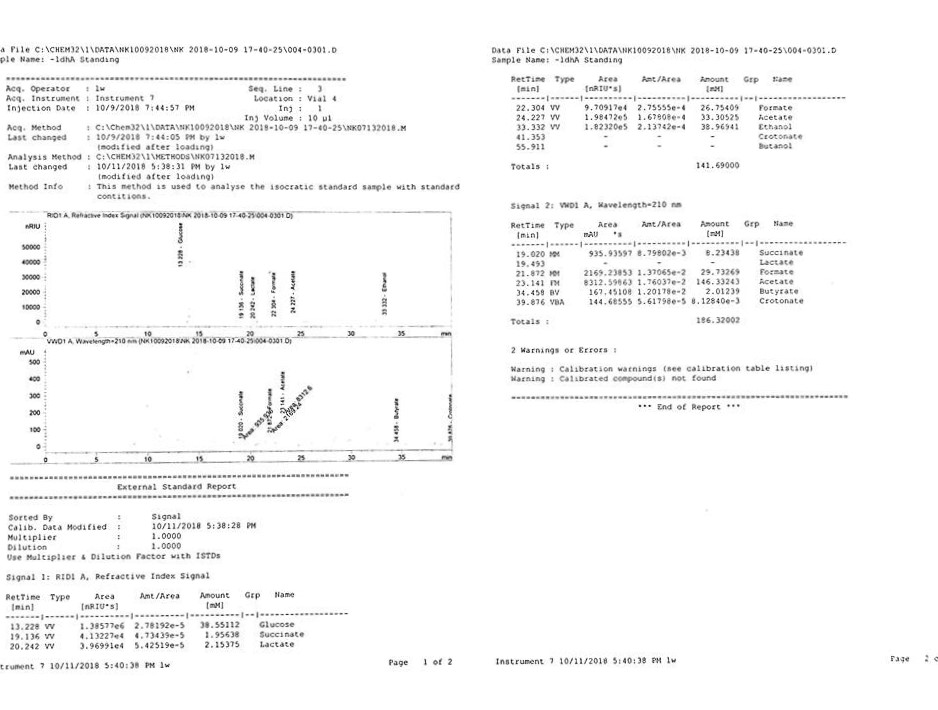 Once ldhA was deleted, another test was taken to determine if butyrate would increase in production if no lactate would form. Fig. 8 illustrates the data derived from the test, tabulated into Fig. 10. Based on the data, Fig. 9 was created which can be compared to Fig. 6. Although by only very little, butyrate did increase in production over the period of time, with no lactate being formed. Ethanol increased very heavily, most likely due to how the NADH reacts with the Acetyl-CoA. In conclusion, with the gene deletion of ldhA, butyrate increased in production. 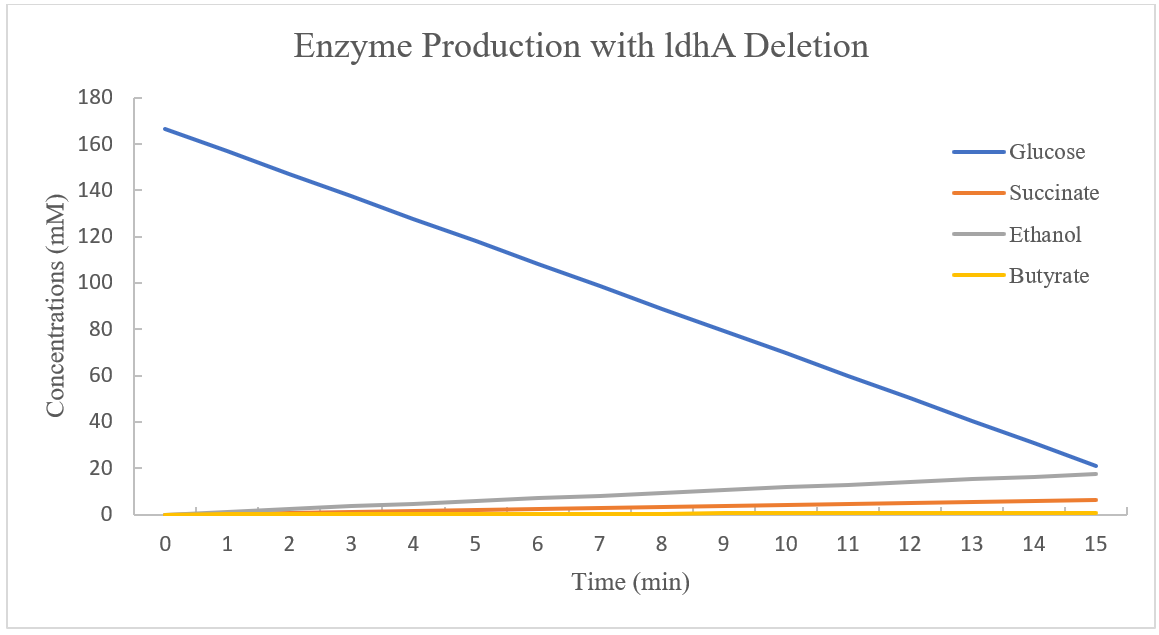 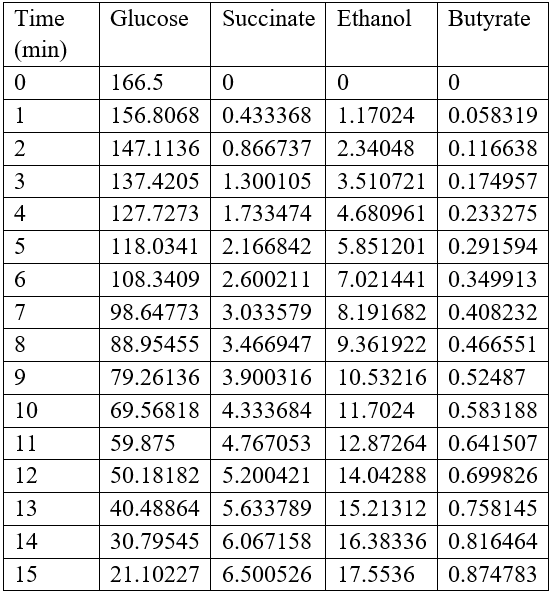 The objective of this model is to illustrate the effects of deleting genes on the production of enzymes. The model will have two components, one is the wildtype where no gene has been deleted, and the other is the pathway where the frdA and ldhA genes has been deleted. Each component had five different sample tests through the HPLC, with resultant readings portraying the concentration of glucose, succinate, lactate, formate, acetate, and ethanol. Most of these enzymes can be seen in the previous model displaying the pathway and NADH transference, except for formate. Formate is a byproduct of pyruvate forming into Acetyl-CoA. As stated previously, the frdA and ldhA genes are responsible for the production of succinate and lactate through the plasmid. Thus, it is hypothesized that with the deletion of the frdA and ldhA, succinate and lactate will cease their production and the other enzymes will increase in production.

Figure 1 and Figure 2 display the statistical derivation from the HPLC for the wildtype and frdA/ldhA deleted pathway respectively. The RSD is the relative standard deviation, allowing for each enzyme to be compared in regards to their standard deviations. It can be observed that in Figure 1, the RSD for formate and ethanol are high while in Figure 2, succinate, lactate, and ethanol are high. As a result, the enzymes with low RSD are more precise.

Figure 3 and Figure 4 illustrate the concentrations of enzymes over time based on HPLC data, similar to the previous model. It is assumed the rates are linear, with initial glucose concentrations of 166.5 mM. Figure 5 and Figure 6 are tabulated data based on the average concentration rates over a period of 30 minutes. It can be concluded that with the deletion of frdA and ldhA, succinate and lactate concentrations decreased while the other enzymes increased matching the hypothesis. 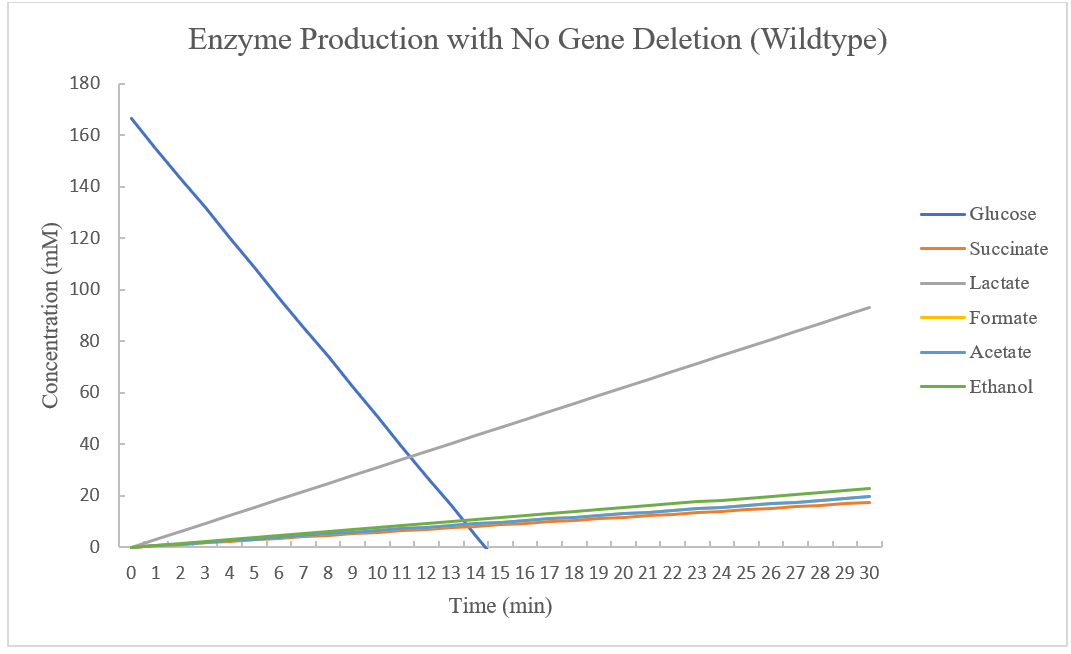 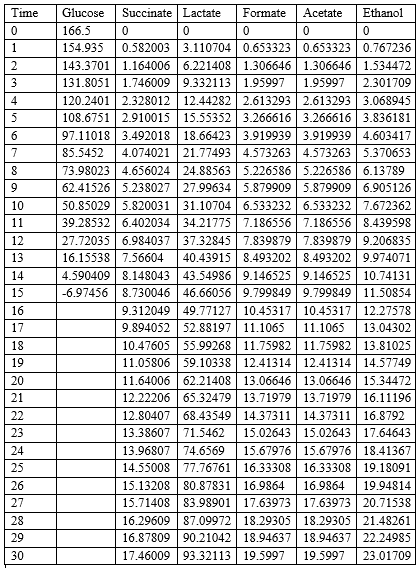 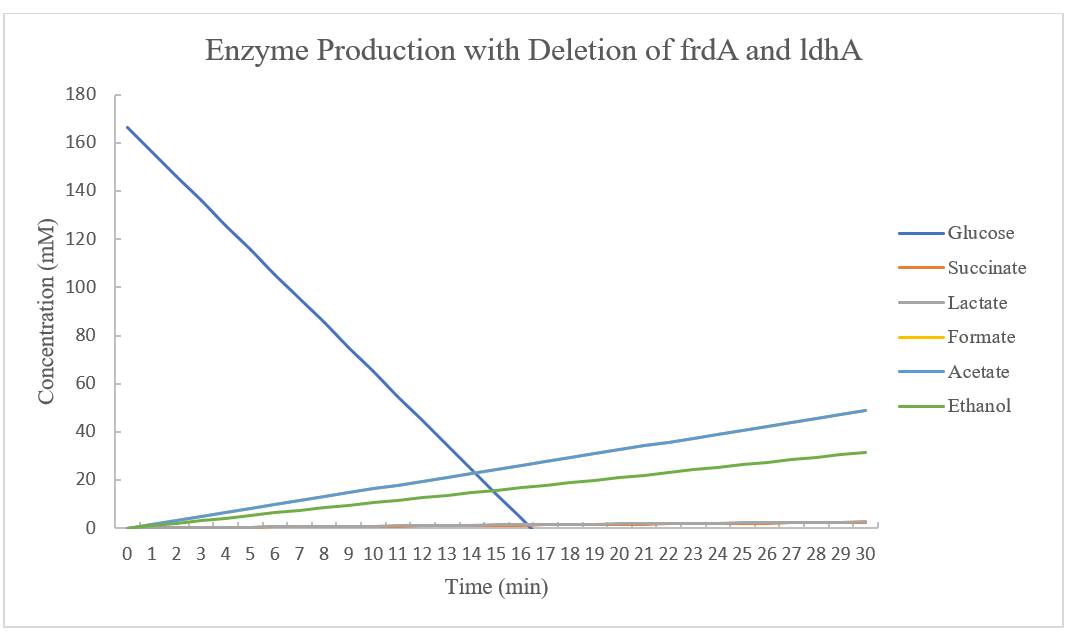 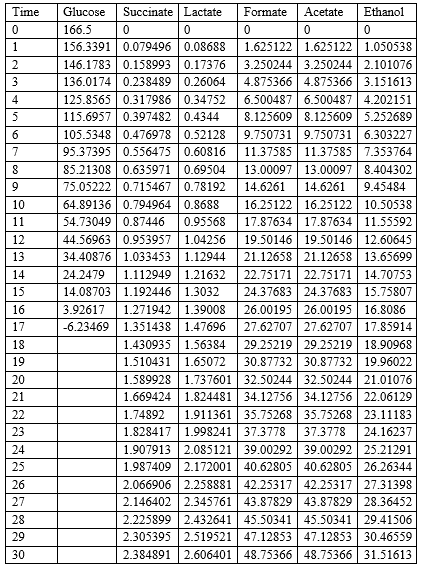