Candida albicans is a fungi that has the potential to cause life-threatening systemic infections. C. albicans undergoes a relatively unique white-to-opaque switch in response to environmental ques. After this switch occurs, C. albicans becomes more virulent as it can then better adhere to and penetrate the infected tissue. The gene WOR1 controls the white-to-opaque transition of C. albicans. Studies have shown that the 5’ UTR of the WOR1 gene controls the expression of the protein Wor1 and therefore the white-to-opaque switch. The particular factors involved in enabling this transition are currently unknown, but it has been proposed that RNA-binding proteins are involved. This year, the USAFA iGEM team has attempted to discover what environmental factors prompt the 5’ UTR of WOR1 to regulate Wor1’s expression while transforming a vector array in to E. coli and S. cerevisiae. The inserted vector contains both a red florescence protein coding sequence (mRuby) and a sequence of DNA that codes for the 5' UTR of the WOR1 gene. When functional, the inserted vector will glow red and produce a transcript of the 5' UTR of WOR1 that will sequester the protein promoters that enable the translation of Wor1 and prevent Candida from becoming virulent.

C. albicans infections affect the military and general public on a daily basis. The infections can range from being a minor irritation to threatening the lives of those who have compromised immune systems.2 Our team chose to research this topic as it could eventually serve in a capacity to help reduce the number of civilian and military lives that are affected by this disease.

White (W) and Opaque (O) phenotype switching in C. albicans is hypothesized to be controlled by binding of RNA-binding proteins (purple) to the 5’ UTR of the WOR1 transcript. WOR1 transcription (yellow) and translation (blue) leads to the opaque phenotype (orange), and no Wor1 protein results in the white phenotype (white). 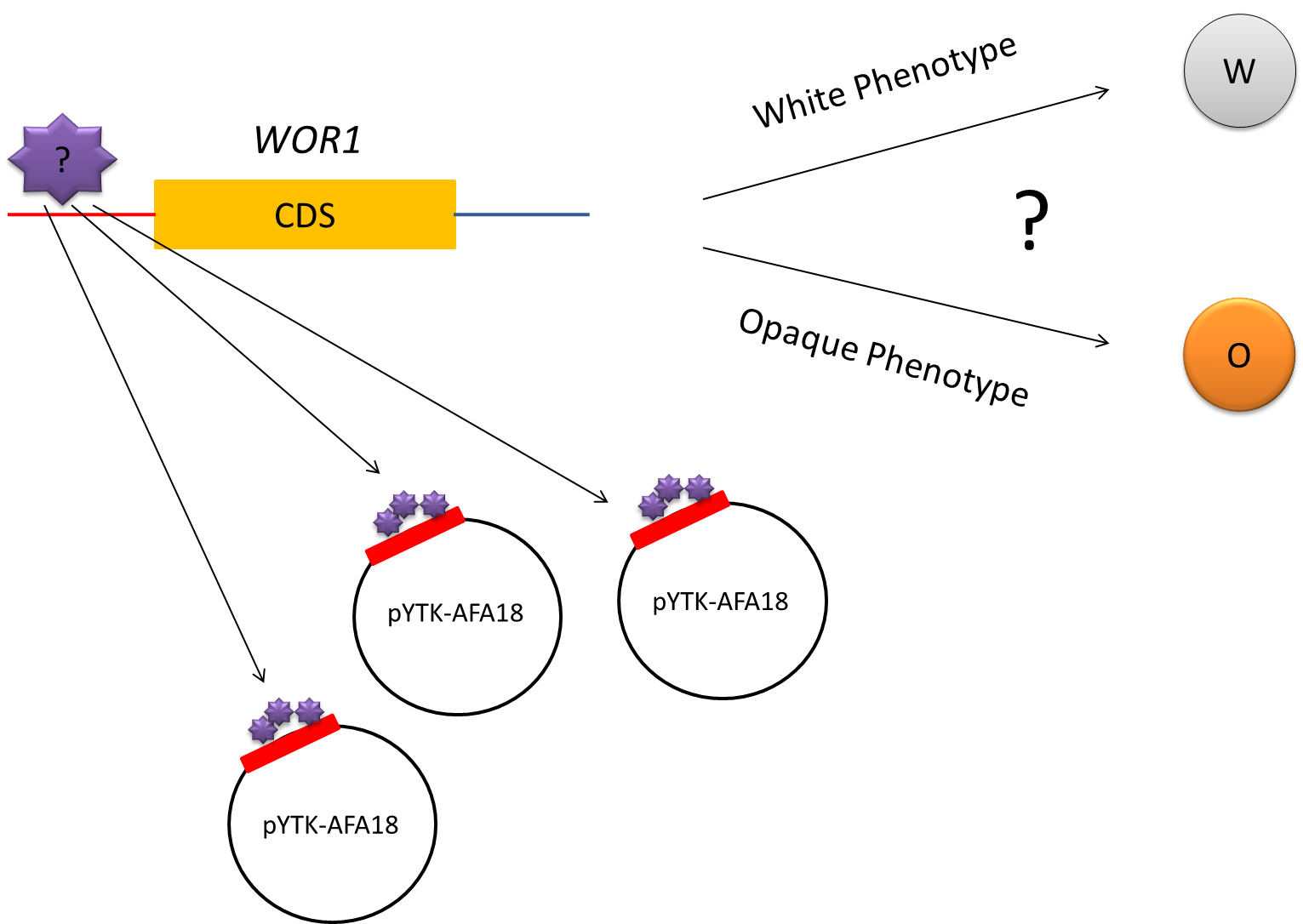 The next step is to transform the cloned 5’ UTR of WOR1 into C. albicans using the novel yeast plasmid pYTK-AFA18 with some slight modifications for incorporation into its genome. This will allow the identification and characterization of the RNA-binding proteins that regulate its phenotypic switching and ultimately the role this switching plays in the pathogenicity of C. albicans.