XMU-China set up a cell-free detection system platform for early screening of tumor biomarkers this year and named it Fang. The entire detection process is based on microfluidic chip technology. In order to link up all the experimental parts and show you the detection process clearly, we drew an operation instruction below.

Here are some possible factors that may influence the detection result in real life. Certainly these variates have already been controlled in ideal conditions. You can click here to check our hardware's details.

5. Stability of our hardware

To address these issues, we propose following solutions.

1. As we all know, there are many constituents in human's whole blood, like red blood cells, white blood cells and platelets. So before adding sample to chips, we will pre-treat the sample by centrifuging that we would get pure serum without any colorful impurities to influence detection result.

2. To verify the effect of the coating, we disassemble the steps of Ternary affinity coating (TERACOAT) method. After each layer of coating is completed, we detect the fluorescence of washing solution to find whether ssDNA is tightly bonded to aptamer.

3. The aptamer competition reaction needs to be carried out at room temperature. For now, the environment temperature when we do the verification experiment is above 25 ℃, which is basically conform to the requirements of experiment. If need in the later stage, we will put a temperature adjusting device in the box to keep the temperature constant.

4. Select two different pipelines on same microfluidic chips as the control group, add pure water into one pipeline and standard solution into another. You can compare the data of your water samples with that of the control group to reach your conclusion.

The purpose of our project is definitely not to replace professional testing like pathological diagnosis. If our project can help people make preliminary judgments of samples and save their time and money, it will inspire us a lot.

5. Before the final version of hardware is mass produced, we will debug and improve the stability of hardware by simulating different experimental conditions.

6. As we mentioned above, the biological reagents are in the state of freeze-dried powder. They have been placed in the microfluidic chips which are hermetic in the laboratory before you use them in practice. The microfluidic chips are disposable, so that they will not be exposed to biological safety problems if you collect them appropriately after using them. What's more, we used purified EpCAM to replace serum to do verification experiment in our lab. As for clinic experiment, we will finish it under the guidance of professional doctors in clinic lab for the future plan, which meets the requirement of iGEM committee.

The operation instruction is following:

1) We get the peripheral blood to be tested from the user who maybe under high-risking or already sick, and pre-treat the sample by centrifugation.

2) When the processed sample (serum) is added to the disc chip we designed, the chip would be placed in the detection hardware and remotely controlled by users' app.

3) After a series of biological reactions, the protein signal is converted to fluorescent signals.

4) App will convert the acquired image results into a visual and readability analysis report, which is based on its internal machine learning sample database.

5) The professional doctor performs real-time diagnosis and treatment feedback through the communication platform built by the block chain, that is to achieve point-to-point information sharing between users and doctors.

You can also browse our Hardware page to see our videos and have more direct understanding of how to detect the fluorescence by our device.

For cell-free treatment, we were inclined to utilize outer-membrane vesicles (OMVs) to deliver nucleic acid. We designed three modules to anchor archaeal ribosomal protein L7Ae to the outer membrane protein A (OmpA) and then to encapsulate siRNA into OMVs (see our design page). Firstly, we identified our OMVs via transmission electron microscopy (TEM). Transmission electron microscopy (TEM) pictures identified what we extracted were exactly OMVs with membrane structure and 100-nm diameter (Figure 1).

Secondly, we have successfully detected the OmpA-SpyTag (Figure 2) and the SpyTag/SpyCatcher combination (Figure 3) inside OMVs via HSFCM [1-2], indicating the presence of L7Ae. 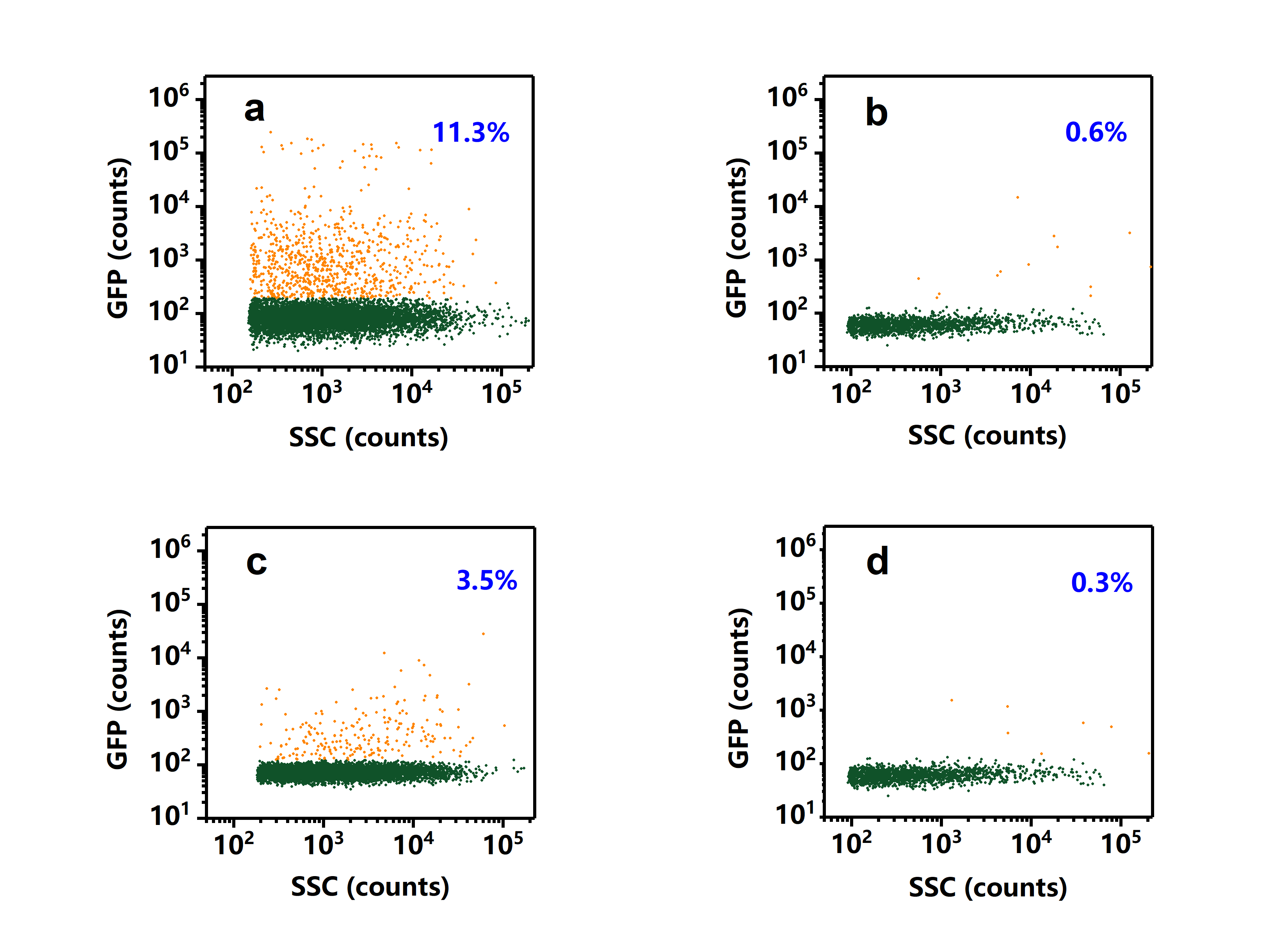 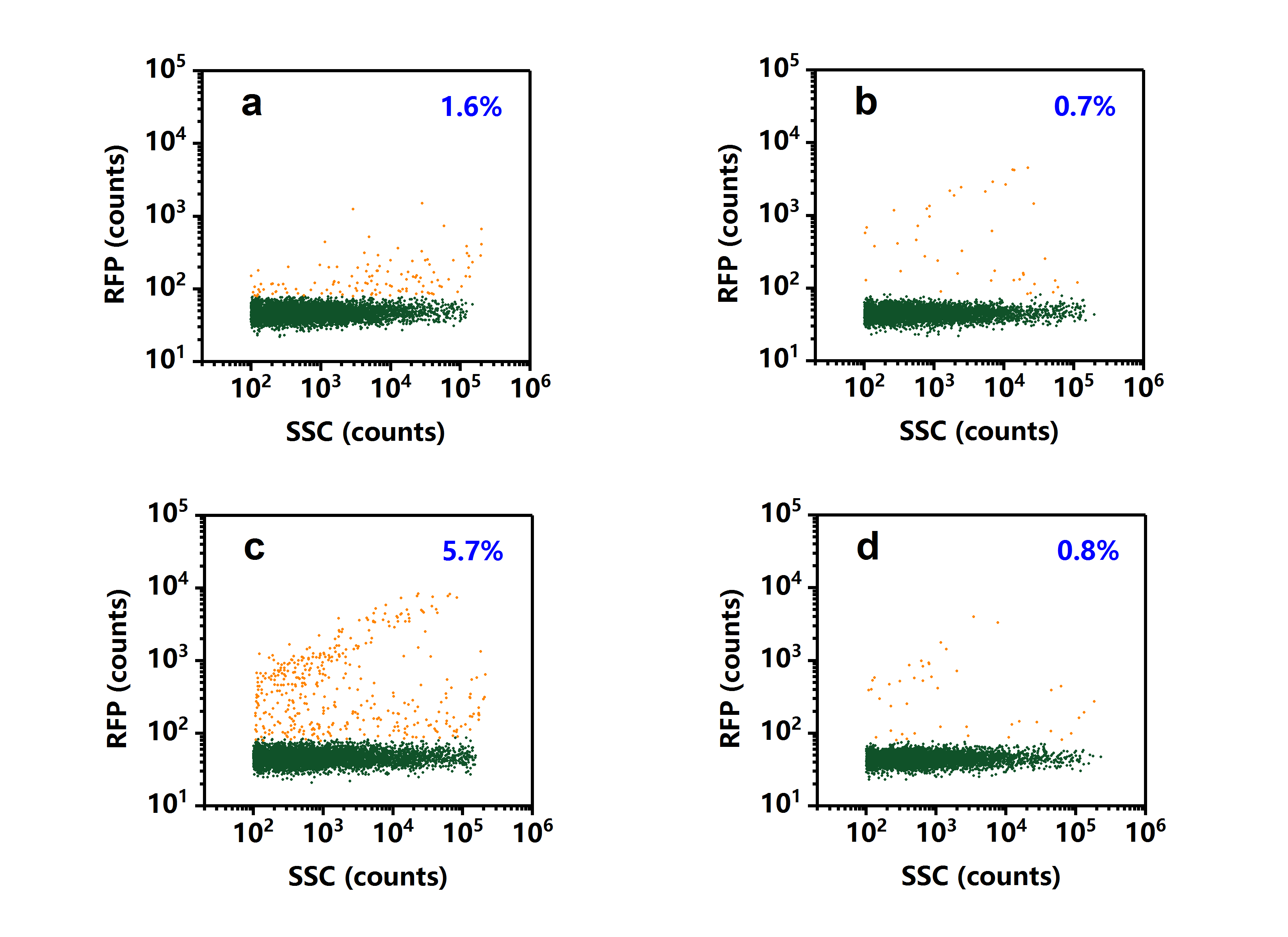 Figure 3. Bivariate dot-plots of RFP red fluorescence versus side scattering (SSC) for our OMVs isolates. E. coli BL21 transfected with BBa_K2623028, BBa_K2623029, BBa_K2623030, BBa_K2623031 were incubated with OMVs-free LB culture for about 5 hours to get a 0.6-0.8 OD600 respectively, in which BBa_K2623029 and BBa_K2623031 were set as negative controls. Then IPTG was added to a final concentration at 0.5 mM and nurture the bacteria overnight. OMVs were isolated according to our protocols and then analyzed by HSFCM. It's interesting to note that E. coli transfected with BBa_K2623030 (Figure 3c) could secret more RFP-OMVs than BBa_K2623028 (Figure 3a), indicating that ST/SC conjugation inside OMVs is more efficient with ST at the C-termini of OmpA. This result is inconsistent with the result shown in Figure 4, in which ST at the N-termini of OmpA (BBa_K2623028) has a higher efficiency to be encapsulated inside OMVs. We propose that GFP inserted to OmpA might interfere the transport of OmpA-ST (BBa_K2623021 and BBa_K2623023) to OMVs.

Moreover, we have successfully detected the increase of RNA level inside OMVs between the positive group and the negative group, suggesting the presence of siRNA (Figure 4).

Figure 4. Bivariate dot-plots of green fluorescence versus side scattering (SSC) for our OMVs isolates. E. coli BL21 transfected with BBa_K2623029 and BBa_K2623032 respectively were cultured in 100 mL OMVs-free LB culture for about 5 hours to get a OD600 at 0.6-0.8, in which BBa_K2623029 was set as negative control. Then Arabinose was added to a final concentration at 0.2% and after incubation for another 2 hours, IPTG was added to a final concentration at 0.5 mM and then nurtured the bacteria overnight. OMVs were isolated according to our protocols and stained with SYTOTM RNASelectTM. The stain OMVs were analyzed by HSFCM. As we expected, OMVs isolated from BBa_K2623032 could secret more OMVs containing with RNA stained positively by SYTOTM RNASelectTM (Figure 11b) than BBa_K2623029, indicating that our L7Ae and C/Dbox could fulfill their function. It's a pity that we didn't have cell culture experiment to test our siOMVs to silence Kras in human pancreatic ductal adenocarcinoma (PDAC). In our future plans, we'll finish our cell experiment and demonstrate the function of our siOMVs.

However, we had no certification for cell culture experiments and it's a pity that we haven't incubated the OMVs with diseased cells to test the efficiency of our siOMVs (OMVs containing with siRNA). A paper published in 2017 demonstrated the potential to use extracellular vesicles (a similar thing to OMVs) for siRNA delivery and then treatment. [3] Hence we are confident with our OMVs for its ability to deliver siRNA as well.