Protein plays a significant role in performing physiological functions. [1] However, in diseased cells, protein carrying out a certain function may indicate the proceedings of disease. Such protein could be sorted to biomarkers, which have been regarded as the targets of disease detection and treatment in recent years. [2-4] Therefore, detecting those biomarkers of protein-type becomes more and more critical to biological and medical fields.

There are two main detecting approaches to detect a particular protein in a complex sample. One is direct determination of the content after purification, and the other is binding assays which include a target recognition probe and a signal transducer. The former approach includes gel filtration chromatography, ion exchange chromatography, nickel column and more. While on the down side, these methods involve high costs, strict equipment requirements and other drawbacks, which are not suitable for promotion and application. The enzyme-linked immunosorbent assay (ELISA) is a typical representative of the latter approach, nevertheless, such assays using antibodies as affinity ligands have cross-reactivity of antibodies compromising the specificity to the target of interest. [5] What's worse, the premise of using ELISA is to find the corresponding antibodies, but the fact is that not all proteins can find their specific antibody protein. That is to say, the use of ELISA is also limited.

In terms of binding assays, using aptamers as affinity ligands to recognize specific proteins are better than those using antibodies. Aptamers are short, synthetic single stranded oligonucleotides (DNA or RNA) that can bind to target molecules with high affinity and specificity. [6-9] They are commonly selected from random sequence libraries, using the systematic evolution of ligands by exponential enrichment (SELEX) techniques. [10] Advantages of aptamers over antibodies include longer shelflife, improved thermal stability and ease of modification and conjugation. [11]

An interesting binding assay is to use aptamers as the target recognition probes and CRISPR-Cas12a (Cpf1) as the signal amplifier, which is called Aptamer Based Cell-free Detection system (ABCD system, Figure 1). We developed this system to detect those biomarkers of protein-type for the purpose of disease detection or staging.

The core of the ABCD system is the specific binding of the aptamer and its target protein. We immobilize the aptamer- "complementary strand" complex on a solid phase, using a "competitive" approach to free the "complementary strand"; then the "complementary strand" was detected using the trans-cleavage property of the Cas12a protein, which allows the fluorescence recovery of the static quenched complex whose fluorophore and quencher are linked by a ssDNA. In summary, we initially transform the protein signal to the nucleic acid signal, then transform the nucleic acid signal to the fluorescence signal. We use aptamer SYL3C [12] against EpCAM, an epithelial cell adhesion molecule that is highly expressed on the surface of adenocarcinoma cells, to test the feasibility of our system.

Outer-membrane vesicles (OMVs) are lipid vesicles commonly produced by Gram-negative bacteria, which are filled with periplasmic content and are 20-250 nm in diameters. The production of OMVs allows bacteria to interact with their environment, and OMVs have been found to mediate diverse functions, including promoting pathogenesis, and enabling bacterial delivery of nucleic acids and proteins. [1-2] A recent paper by Kojima R et al. 2018, demonstrated an EXOtic device that can produce exosomes with specific nucleic acids cargo. [3] We were impressed by the amazing OMVs and EXOtic device and came up with an idea to design a cell-free system to enable specific siRNA to be encapsulated into OMVs for cancer treatment.

Not only eukaryotes but also prokaryotes can produce nanoscale bubbles to fulfill diverse functions, such as cellular communication, surface modifications and the elimination of undesired components. Additionally, because of this functional versatility, OMVs have been explored as a platform for bioengineering applications. This year, we XMU-China decide to utilize OMVs as a cell-free platform to deliver our nucleic acids agents to facilitate therapeutic targeting of oncogenic KRAS in pancreatic cancer. [4-5] 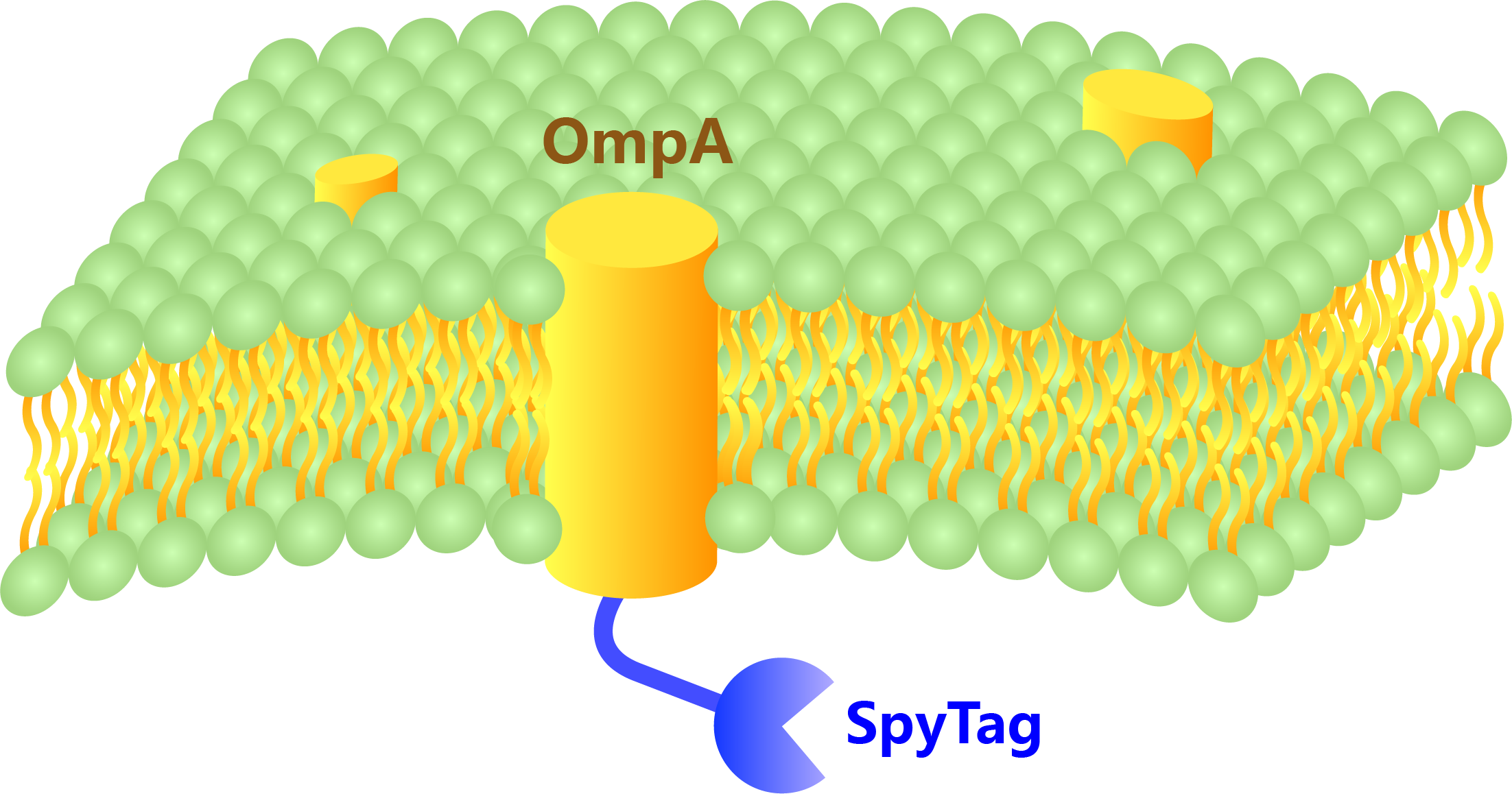 Figure 1. We utilize a split protein SpyTag/SpyCatcher (ST/SC) bioconjugation system to create a synthetic linkage between protein OmpA and archaeal ribosomal protein L7Ae. We fuse SpyTag with OmpA at its C-termini and N-termini respectively. [6] 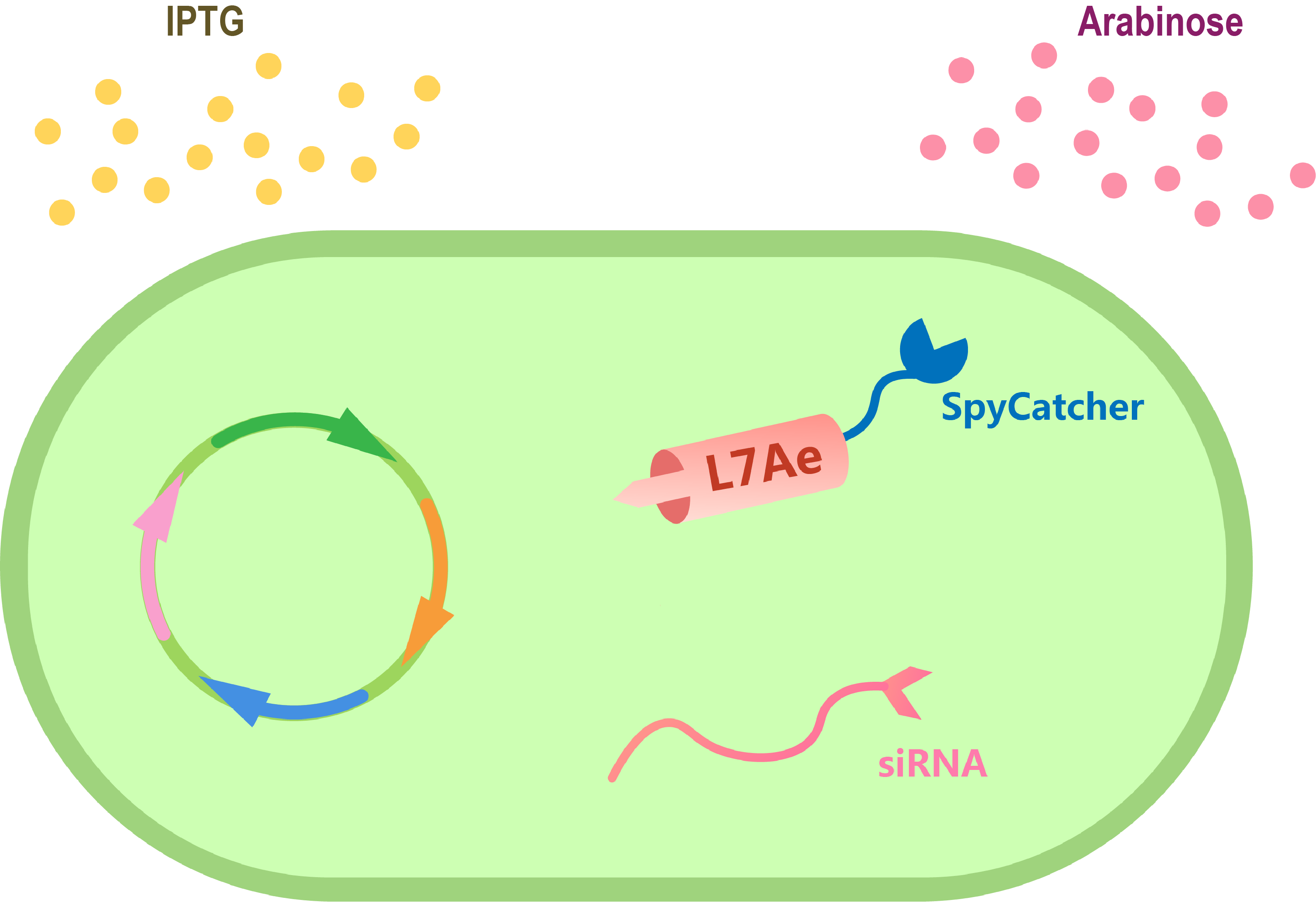 Figure 2. After the induction of IPTG and Arabinose, we can get L7Ae-SpyCatcher and siRNA-C/Dbox. Archaeal ribosomal protein L7Ae owns the ability to bind with C/Dbox RNA structure. 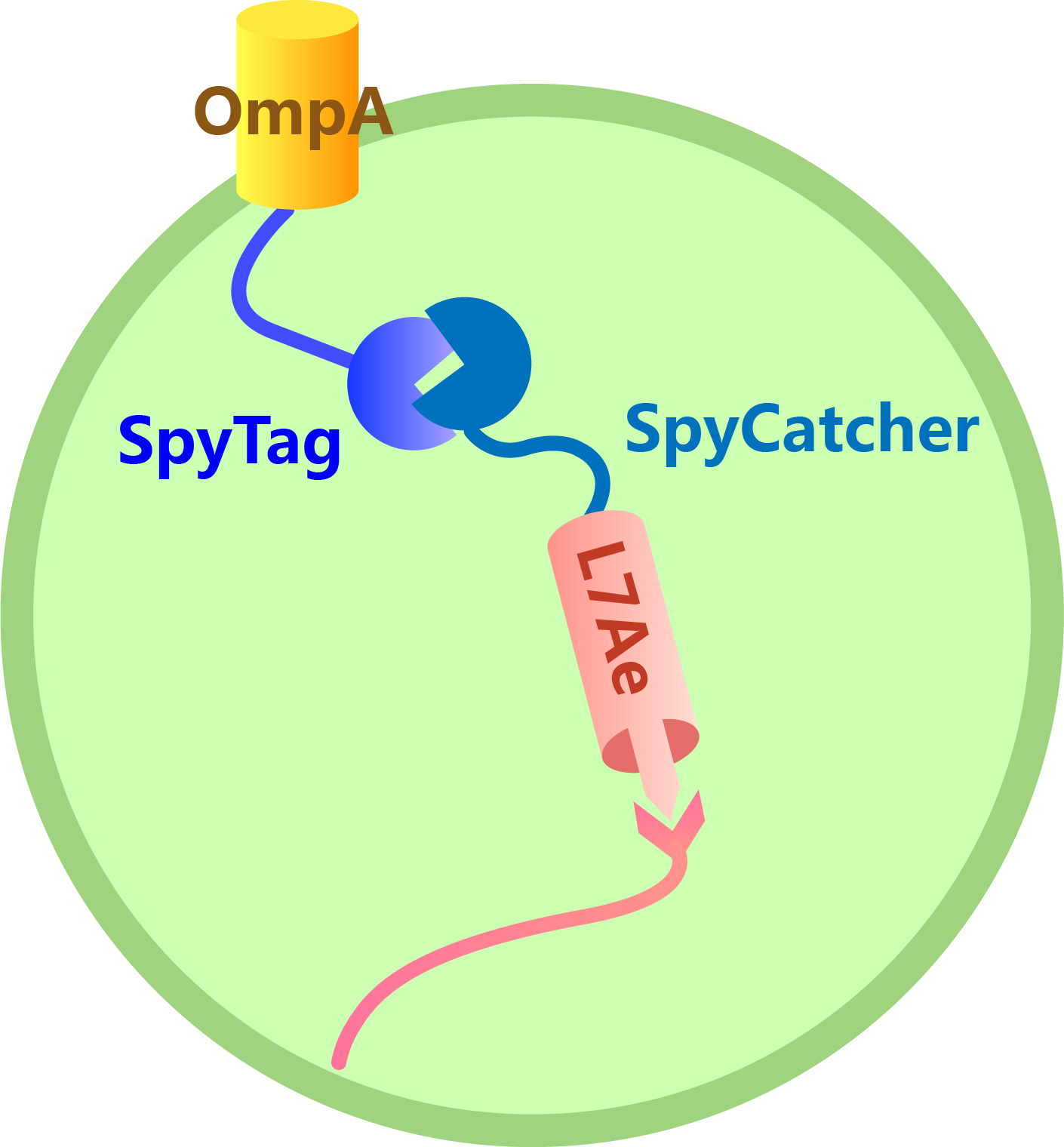 Figure 3. With the interaction between SpyTag and SpyCatcher, and the ability of L7Ae to be bind with C/Dbox, we can produce customizable and cell-free OMVs containing specific siRNA to traget for oncogenic gene.

Tardigrades are able to tolerate almost complete dehydration by reversibly switching to an ametabolic state. This ability is called anhydrobiosis. [1] Tardigrade-specific intrinsically disordered proteins (TDPs) are essential for desiccation olerance. [2] In 2012, Takekazu Kunieda and his team identified five abundant heat-soluble proteins in the tardigrades, which can prevent protein-aggregation in dehydrated conditions in other anhydrobiotic organisms. [1]

We have carried out research on TDP proteins this year. On the one hand, we plan to preserve the Cas12a required for protein detection and OMVs required for treatment with TDPs. On the other hand, as the wiki says, TDP is a new biological activity protector with great potential. So we are going to use TDP proteins to simplify existing methods of preserving proteins and bacteria.

There are two novel protein families with distinct subcellular localizations named Cytoplasmic Abundant Heat Soluble (CAHS) and Secretory Abundant Heat Soluble (SAHS) protein families, according to their localization. In our project, SAHS1 was used to preserve the proteins and CAHS1 was used for the preservation of the bacteria. 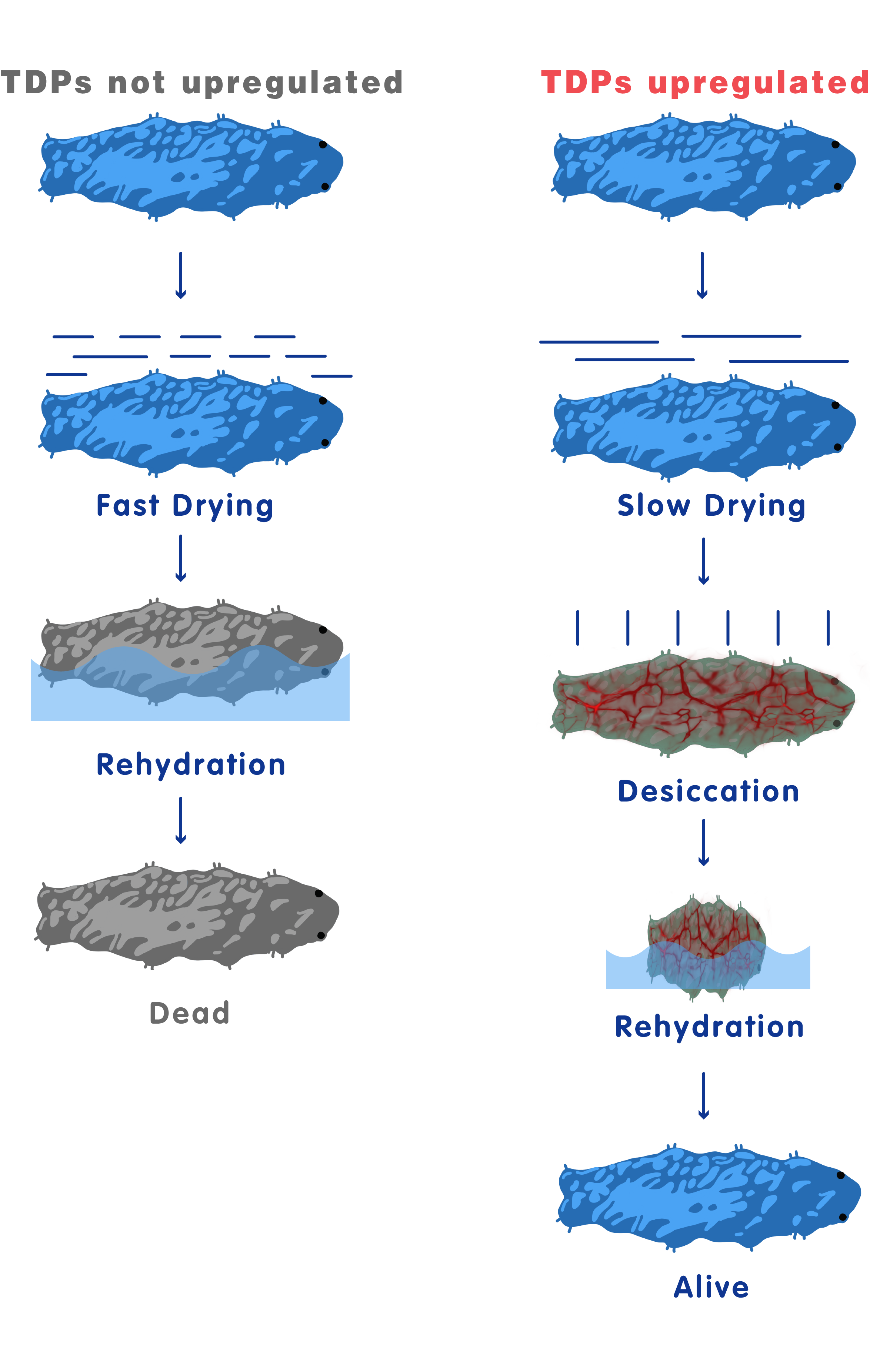