Based on the hypothesis of nearest neighbor method and the dissociation constant of aptamer-"complementary strand" complex, starting from the aspect of thermodynamics, we focused on the change of standard Gibbs free energy to construct "ABKey function" about upper limit of the length of complementary sequence, then we obtained the upper limit by invoking the function to assist in narrowing the choice range of our experimental materials. In order to avoid false positive of dissociation of our aptamer and "complementary strand" designed under the impact of the flow, we constructed fluid dynamic model to check whether our designed rotating speed is viable or not based on the dimension homogeneous principle. In this model, we gave out a feasible rotating speed by utilizing an elementary analysis method--dimensional analysis method to instruct the hardware. Modeling is not only reflected in numbers, but the vividness of images is also an important advantage of modeling. We used multiple softwares to build 3D simulation models of protein, RNA and DNA, one after another. Then we carried out the molecular docking between the DNA and protein, which provided critical basis and help for the subsequent experiments. Besides, we constructed the dynamics model of the competitive reaction using differential equations to derivate the rate equation of particular competitive reaction with the exact method of verification through experiment given as well.

The assumption of nearest neighbor method$^{[2]}$:

$\bullet$The initial concentration of two single nucleic acid chains in the hybridization reaction is the same;

$\bullet$The nucleic acid hybridization reaction satisfies the distate model, i.e., the dechain and the formation of the double strand are always dynamically balanced;

The data used at this time is as follows:

Using self-defined "ABKey function" for this chain, then we get the upper limit 10. 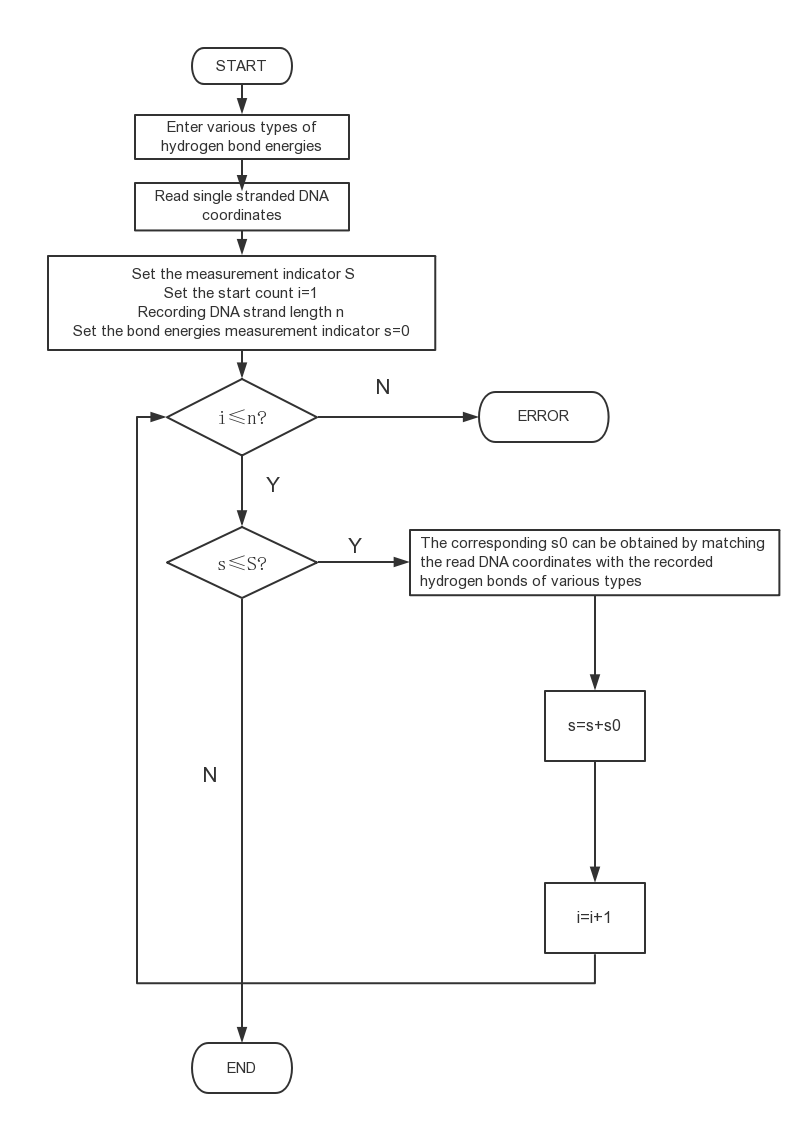 Equation set of the ABKey function:

In fact, the number 10 happens to be a critical value. From 10 bases down, 9 or 8 base complements can also cause "competition" to occur spontaneously in the forward direction, but the fewer the complementary bases, the less likely it is that the aptamer - "complementary strand" double chain structure can be formed, resulting in the loss of the basis of "competition". 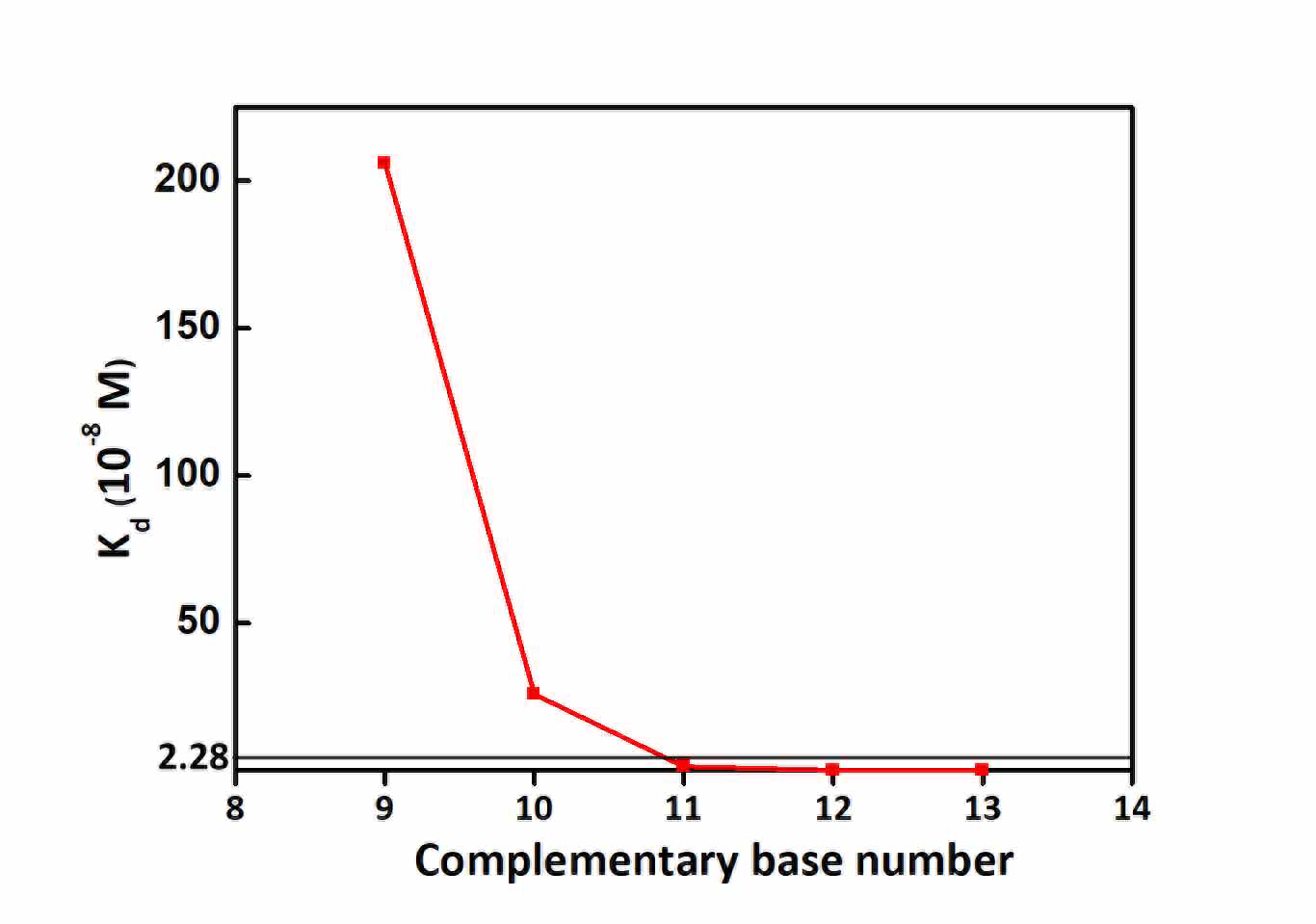 On the other hand, the minimum complementary value was set as 5 according to the literature.

In order to ensure that the adaptor and the complementary sequence designed by us are not dissociated continuously under the impact of the liquid, which leads to false positive results, our modeling guides us to determine whether the designed rotation speed is reasonable.

Referring to the knowledge of chemical fluid flow and DNA structure, we designed a model that guided us to calculate the maximum rotational speed or maximum pressure difference under overall stability between the aptamer and complementary sequences. It's crucial to the hardware.

First, we focused on the relation between the flow velocity and rotation speed in the pipeline driven by centrifugal force only. Under the condition of laminar flow, we introduced several assumptions:

1. Ignoring the effects of gravity;

2. Ignoring the problem of force distribution in the vertical direction, and considered it as the uniform distribution;

Based on the above hypothesis, the specific principle content and derivation are as follows:

The general formula of steady-state flow friction resistance of fluid in fluid mechanics is as follows:

Then, in the same way as the settlement hypothesis, we introduced the fourth hypothesis: the fluid accelerates in the pipe for a short time, and the whole process is considered to be uniform.

According to the force analysis, when the fluid flows outward because of centrifugal, there is no pressure difference, and only the centripetal force is provided by the resistance, i.e.

By substituting equation (2.7) into equation (2.6), we obtained the laminar flow relationship between the speed and the flow velocity in the rectangular pipeline:

In the above, a(m) is the long side length of rectangular section pipeline and b(m) is the short side length.

At this point, we have completed the derivation of the first part about the relation between flow velocity and rotation speed.

The second part is to derive the relationship between drag force and flow velocity. Also under the condition of laminar flow, we introduced the following assumptions:

1.During the process, the fluid’s force on the solid is provided by the drag force;

2.No head loss is considered during liquid flow.

In the process of particle deposition, the drag equation is very consistent with the impact process of our fluid on DNA. The formula is as follows:

In equation (2.12), ds represents the diameter or equivalent diameter of particles. A is also related to ds. And because DNA is a double helix structure, the error in equivalent diameters is huge. Therefore, by simplifying the calculation of A, we want to keep A and get rid of ds.

There is Stokes Law in laminar flow:

In addition, $u_{t}$ represents the velocity of the particle relative to the fluid. Since our adaptor is fixed on the plane, $u_{t}$=$u_{b}$(fluid velocity).

The third part is the dna-related model. To simplify the model, we introduced the following assumptions:

2.The simplified DNA model is supposed to be B-DNA and the base pair is WC pairing;

3.The base pair is considered to be completely dissociated after being destroyed by impact;

4.The forces between the stable DNA consider only the hydrogen bond between base pairs.

Following second part, we can use the DNA molecular structure to figure out the projected area A of the moving plane through which the fluid flows. 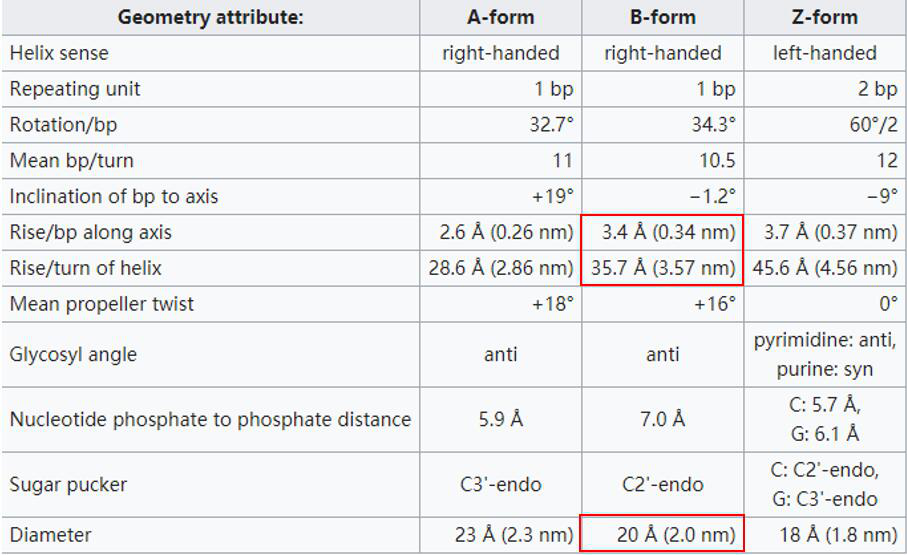 We chose a most common B - DNA as a model. The distance that per chain of the double helix chains having a full circle around the axis (360$\eta$$^{\circ}$) up (or down) is 3.57 nm, usually containing 10.5 nucleotide. Therefore, each two adjacent base’s flat vertical distance is 0.34 nm. And the space between two chains are also certain, i.e., 2 nm.

In equation (2.15), A represents the area of the base pair through which the fluid flows, and n represents the nucleotide number used to activate crRNA. Because once the designed crRNA is determined, n is constant. So A is constant.

After finding the area A, we substitute it into equation (2.14), and the work of the total traction force can be obtained by the formula of force and work:

Later, we obtained the following information in some literatures:

We took the larger $\Delta$x as the fixed value of $\Delta$x, because the bigger the $\Delta$x gets, the more work it does.

Combining the three parts, we used the fluid dynamics model to guide our hardware design. At the same time, in order to ensure that there is no dissociation, we took the maximum energy barrier of a single base pair for conversion. Therefore, the rotation speed was independent from the complementary number.

The above equation is substituted into the calculation equation

That is, the speed of n is not higher than 1182 r/min. Therefore, the rotor with the maximum speed of 500 r/min was selected by us considering the conditions of speed limitation, cost performance and portability.

Supplementary information on pressure drop as the driving force:

We used centrifugal force to be the driving force, while many teams used pumps instead. Taking this into consideration, and hoping that our model could be more complete, and we can help more people, we also provided the relevant derivation process and result formula of pressure drop.

In the rectangular section, the relationship between pressure drop and average flow velocity is:

The above equation can be substituted into the calculation, and the inequality is as follows:

Analysis of model advantages and disadvantages:

1. The analysis of impact force is as follows:

To sum up, we maximize all the items to maximize the possible impact.

2. The stability of base pair is analyzed as follows:

Our hypothesis is that the interaction force between base pairs is only provided by hydrogen bonds to maintain its stability. However, in practical cases, other intermolecular forces, such as van der Waals force and salt bond, may enhance the stability between base pairs, so the model stability is less than the actual stability.

Therefore, in the process of modeling, the impact force is idealized to the maximum. And the most stable energy barrier is also used for calculation on the premise that other forces of the stable structure are ignored. That is to say, the calculated critical speed or critical pressure strength should be the minimum and most conservative value, which is very credible.

Based on the above analysis, we have reasons to believe that our model is reasonable and feasible. 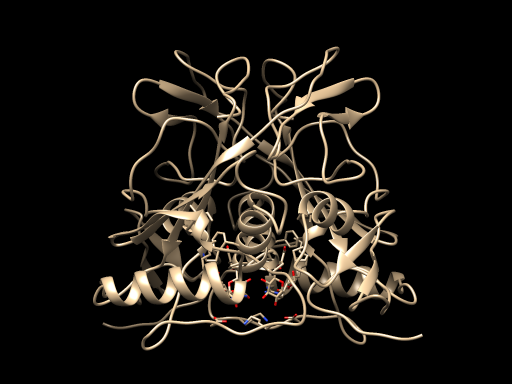 When we were worried about the establishment of secondary three-dimensional structure of DNA, a literature about establishing ssDNA model through RNA model gave us a new inspiration.$^{[8]}$

The conditions are as follows: 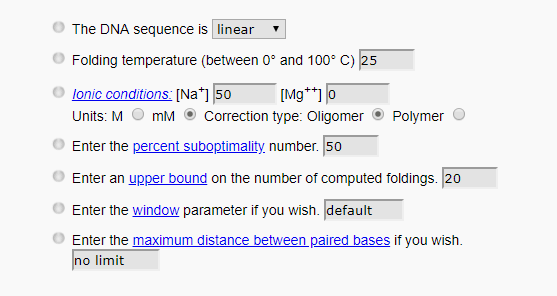 The predicted results are as follows: 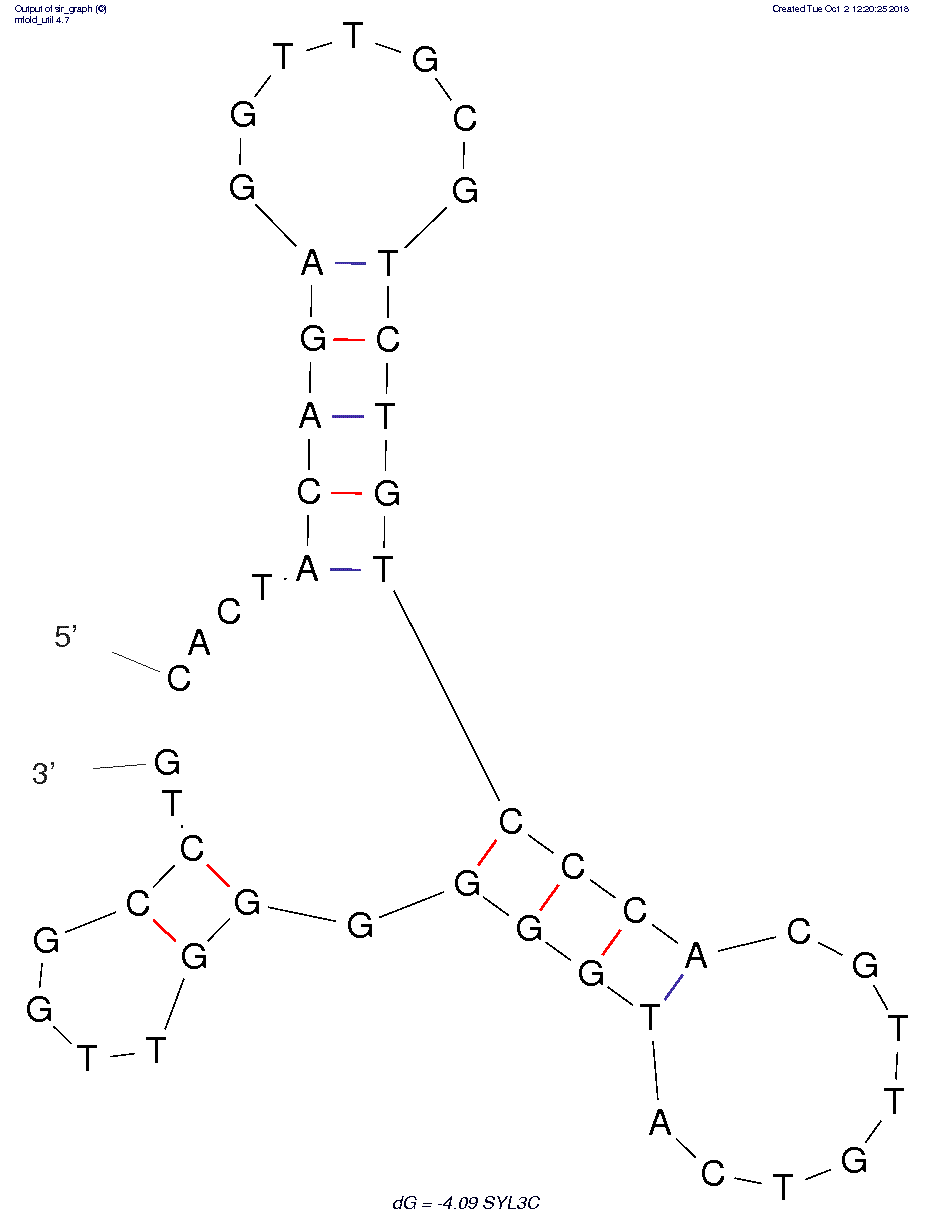 The RNA model is shown below: 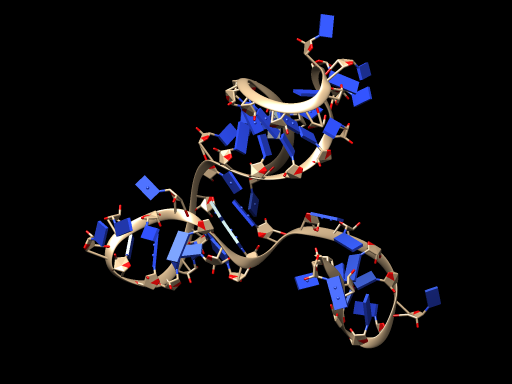 STEP3: We successfully transformed the RNA model into ssDNA model on VMD.$^{[15]}$

The DNA model is shown below: 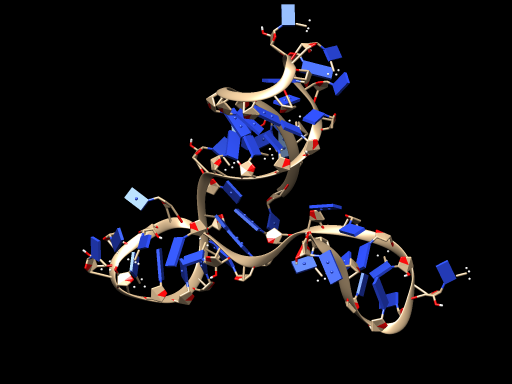 The results of the docking model are as follows: 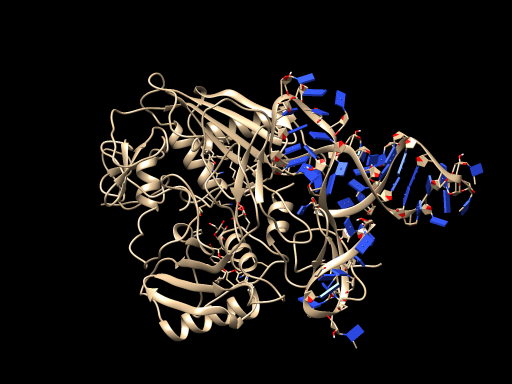 In addition, we used UCSF Chimera to output our modeling figures for each step.$^{[17]}$

Derivation of rate equation of the competitive reaction:

It is assumed that both the forward reaction and the reverse reaction are mixed secondary reactions$^{[1]}$, then the expression of reaction rate can be written down:

For the reaction system, there are material relationships:

We believe that the aptamer and the "complementary strand" are combined in a 1:1 ratio at the start of the reaction, i.e.

Therefore, the expression of the reaction rate can be written as:

This is the differential form of the competitive reaction rate equation. Since both [A]$_{0}$ and [P]$_{0}$ are known at the time of verification; at a certain temperature, the values of k$_{1}$ and k$_{-1}$ are also fixed for the determined reaction. Therefore, for the shifting and integration of (4.10), we can get:

EXPERIMENT: Experiments were performed using the optimized "complementary strand" sequence. The 3' end of the "complementary strand" carries the FAM tag. At a certain temperature, [A]$_ {0} $ and [P]$_ {0} $ were fixed, and [C]$_{0}$ of all experimental groups was set to be the same, so that the single variable of the experiment was the time t of the reaction. The aptamer and its "complementary strand" are immobilized on the magnetic beads. After the protein is added, the magnetic beads are sucked to the bottom by the magnet immediately after the reaction for different time, and the supernatant is taken to detect the fluorescence intensity. By making a t-I figure, since the fluorescence intensity I is proportional to the concentration [C]$^{[2]}$, the form of the relation between t and I is compared with (4.12) to verify whether the derivation of the rate equation is correct or not.