One of the key components to iGEM and synthetic biology in general is standardisation. For now five years, iGEM has developed a robust measurement procedure that allows iGEM teams to measure the fluorescence of green fluorescent protein (GFP). The InterLab aims to identify and correct the sources of systematic variability in synthetic biology by giving all participating labs a protocol for measuring GFP fluorescence. This year’s experiment wanted to look at reducing the variability between labs in measuring fluorescence by normalising absolute cell count instead of OD600. The InterLab used eight plasmids (BBa_R0040, BBa_I20270, BBa_J364000, BBa_J364001, BBa_J364002, BBa_J364007, BBa_J364008, and BBa_J364009) to measure OD600 and GFP fluorescence.

Platereader we used was the FLUOstar Omega BMG Labtech. Specs:

LUDOX CL-X (45% colloidal silica suspension) and water replicates were pipetted into a plate to get an absorbance reading. These readings were used to create a ratio to convert absorbance to OD. 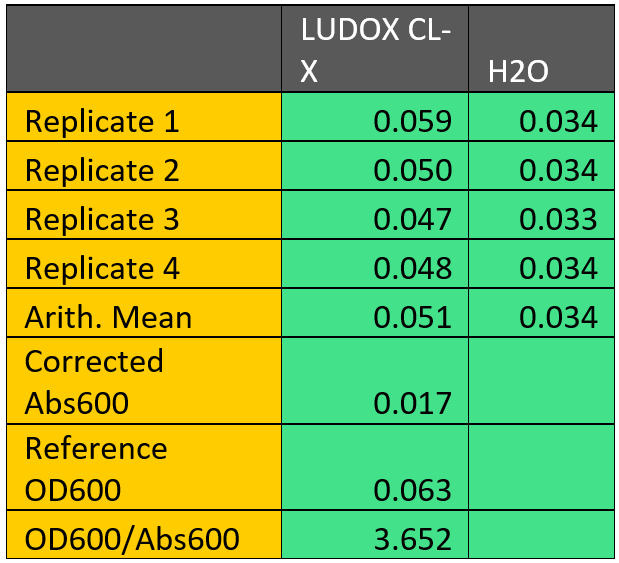 Monodisperse silica microspheres have characteristics that are similar to the size and shape of cells while also having a known amount of particles in a certain volume. A standard curve of particle concentration was created to later be used to estimate a number of cells from Abs600. 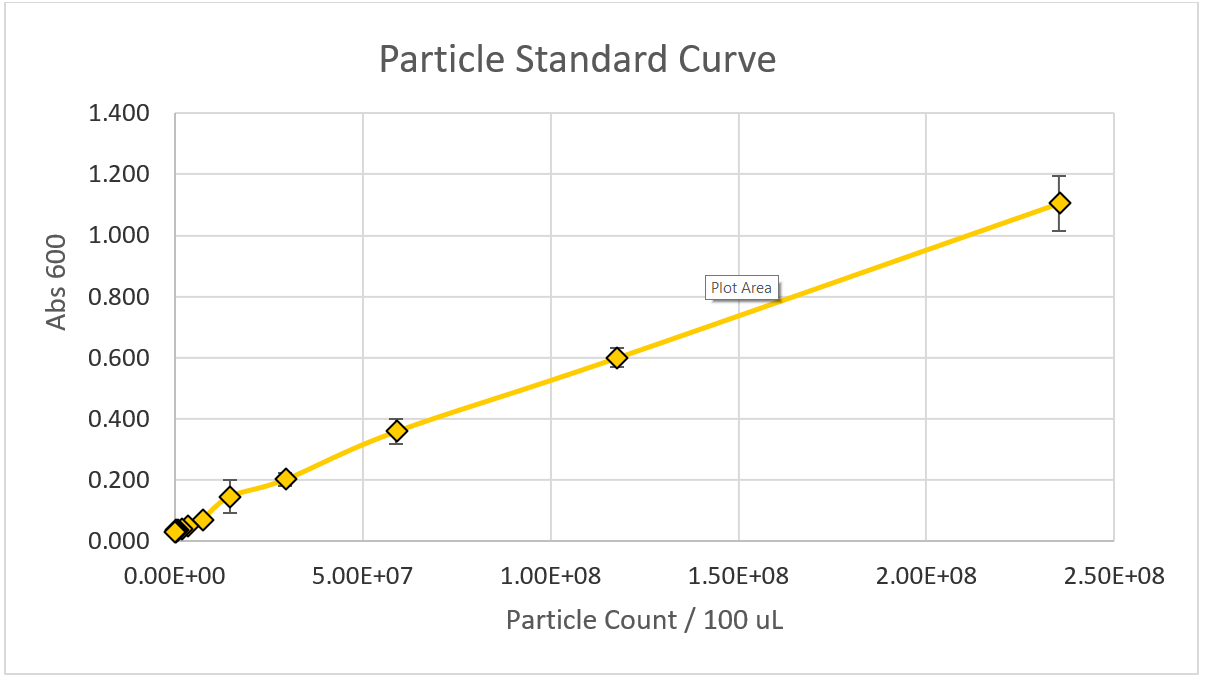 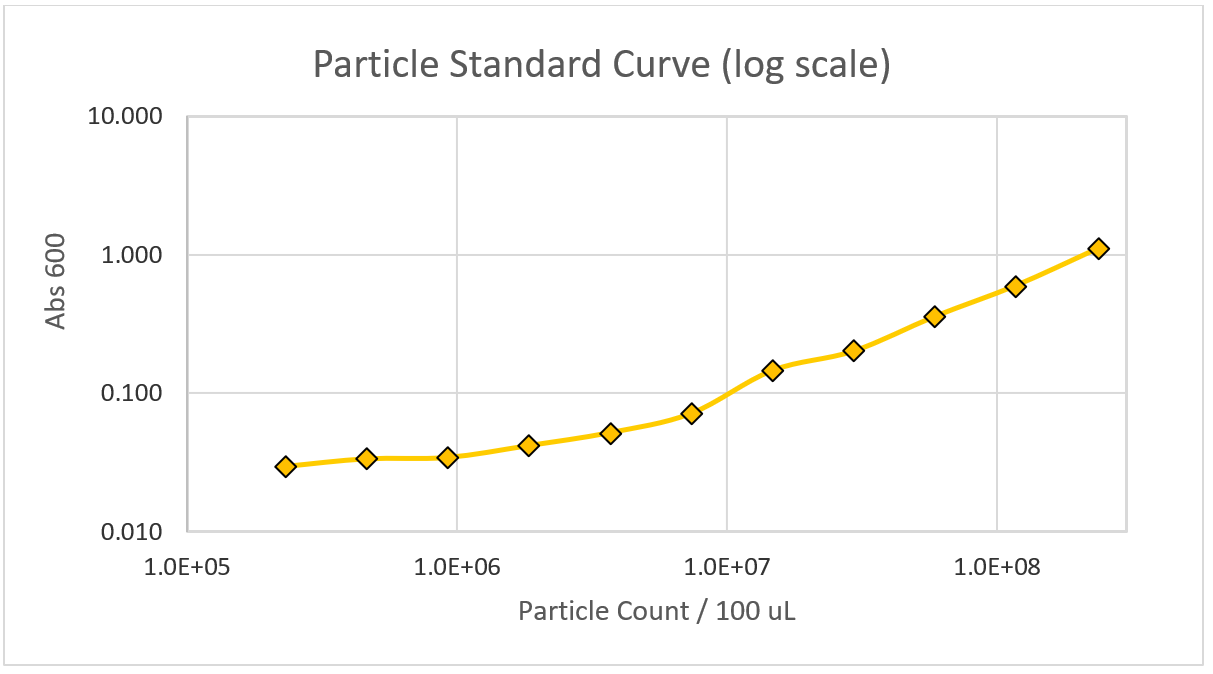 Fluorescein was used to creat a standard curve for fluorescence as using GFP protein with all of the participating teams would be expensive. Figure 3 and Figure 4 show our results. 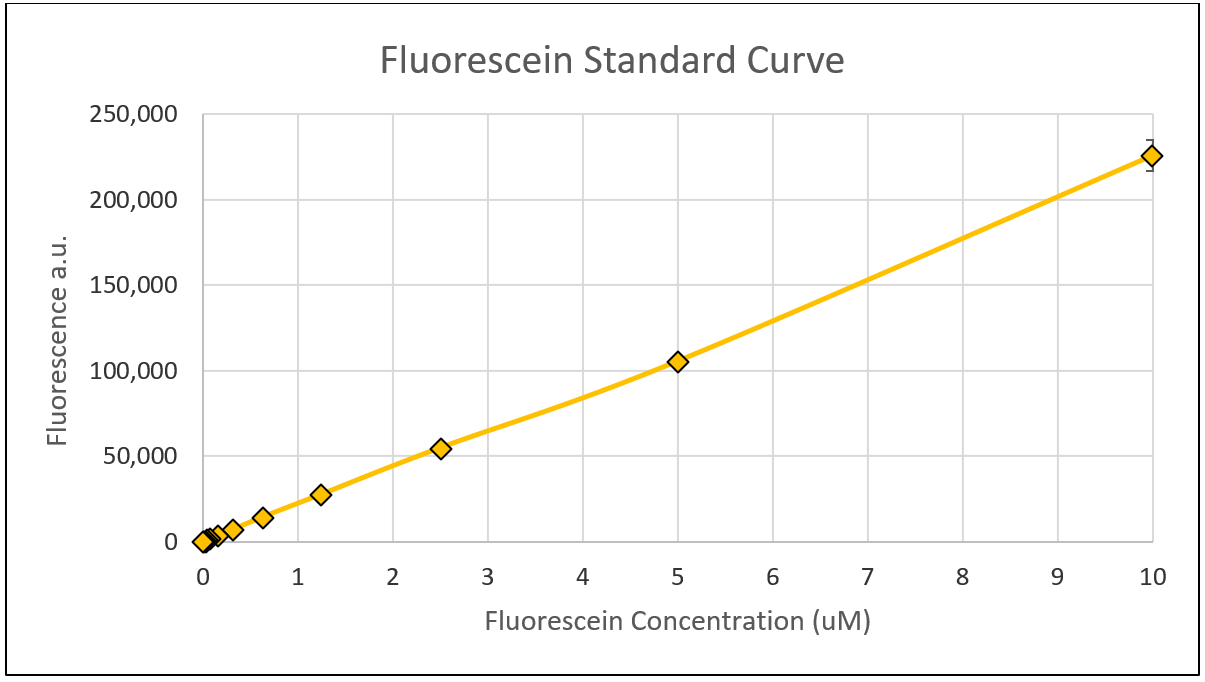 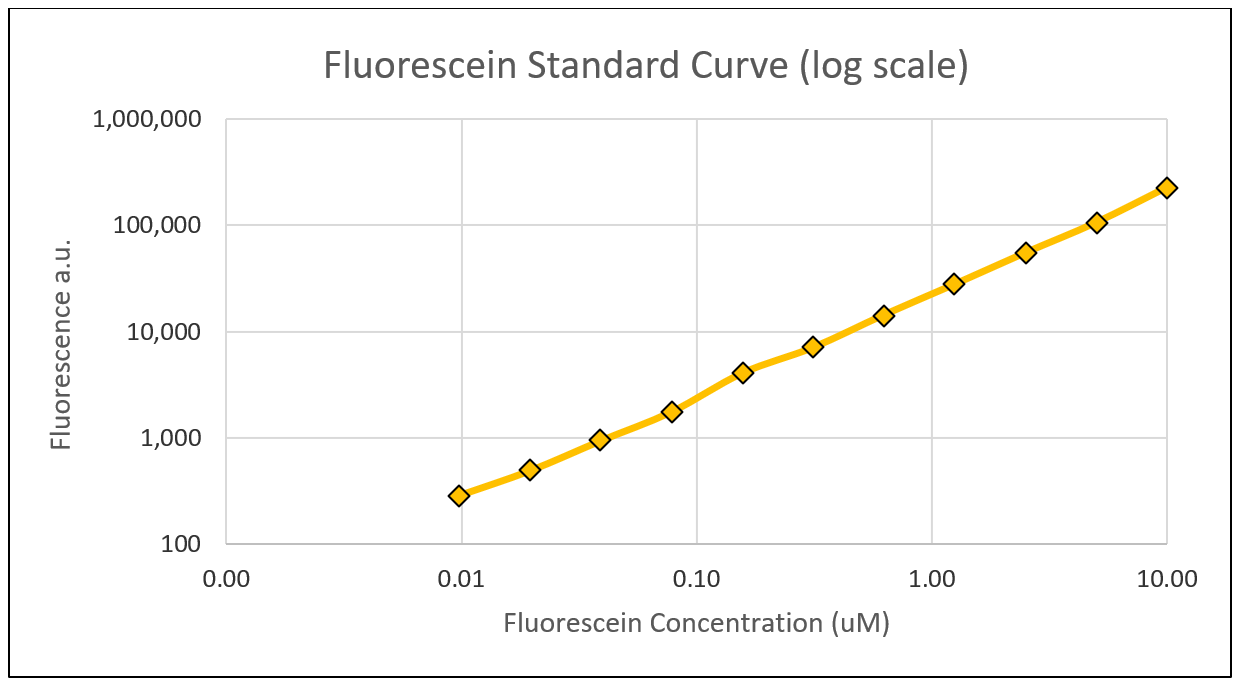 Replicates of a starting overnight cultures were all diluted to OD600 and then serial diluted and plated. CFUs (colony forming units) were counted and assuming 1 bacterial cell will give rise to 1 colony, number of CFUs should directly correlate to concentration of cell culture. Figure 5 show our results. 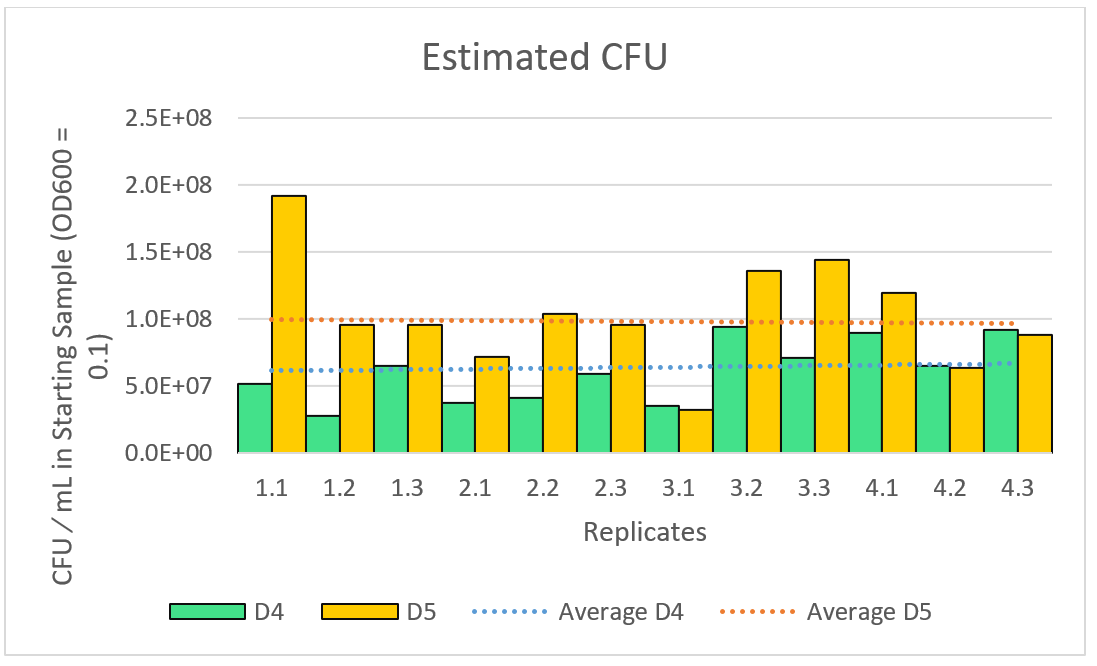 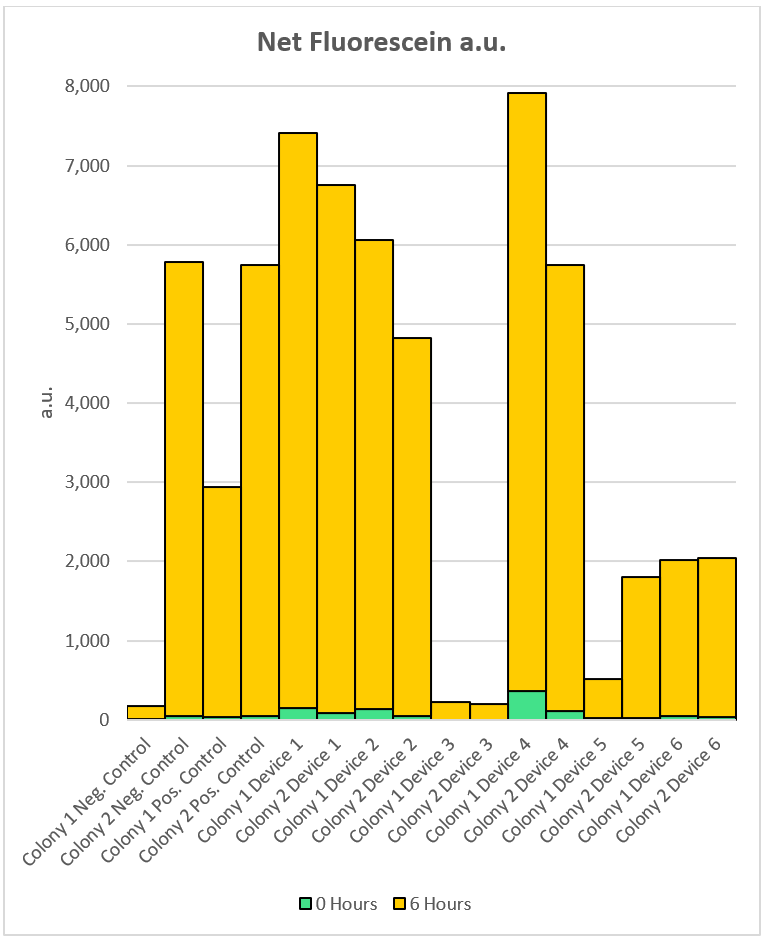 Figure 6. Fluorescence measurements of colonies taken at 0 hours and 6 hours. Colonies show wide variability of fluorescence with notably colony 2 of negative control showing fluorescence likely suggesting there was have been contamination from one of the other colonies or the Edinburgh_UG team. 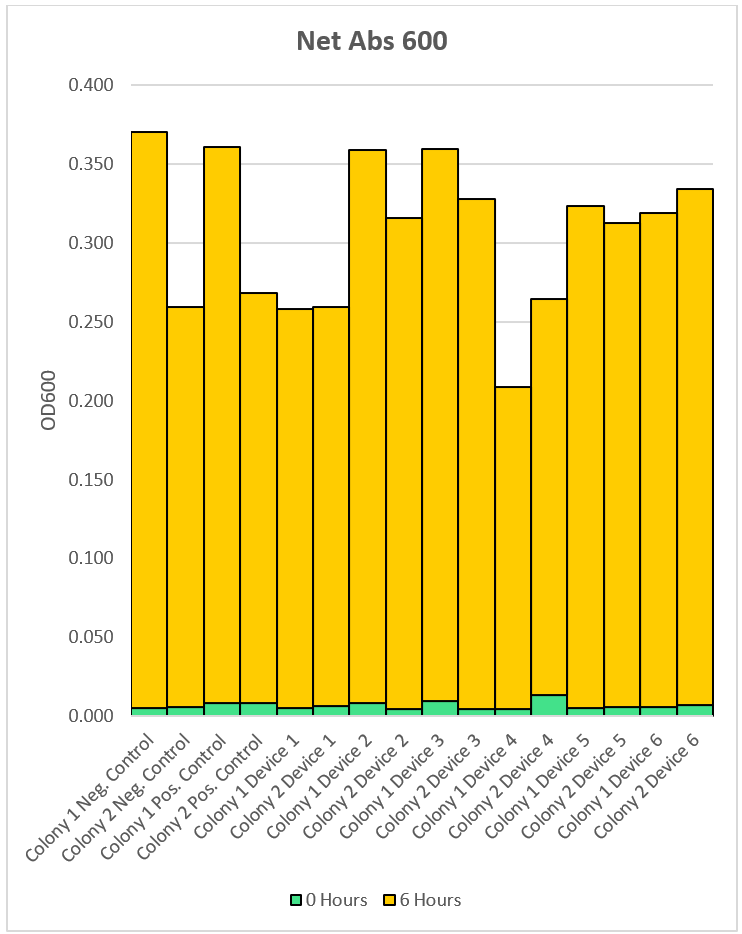 Looking at our data, we can see that our data suggest that the amount of cells in a 1 mL culture is between 60,000,000 and 100,000,000. Our Dilution 4 data estimates the number of cells to be much lower than our dilution 5 data almost by half. However, with large dilution factors and differences in techniques, the variability between cell count estimates could be higher than ideal.