In the laboratory, IPTG serves as one of the most effective molecular inducers of transcriptional activity and therefore genetic elements responsive to this inducer are common. Commercialized pET vectors used a bacteriophage T7 late promoter upstream of the gene or genes of interest. This promoter is only recognized by the T7 polymerase which is under control of the IPTG-inducible lacUV5 promoter. This system creates large amounts of mRNA and, often the desired protein in high concentrations (40 to 50% of the total cell protein). However, has drawbacks such as high level of mRNA can cause cell death or possibly results in plasmid or expression instability. The pET plasmids also are toxic to E. coli in the presence of IPTG(Miroux and Walker, 1996).

Additionally, IPTG is moderately expensive; this makes many approaches that utilizes this inducer financially impractical at an industrial scale with specific biotechnological products(Briand et al., 2016). To make the production of PHA plastics competitive with petroleum-based plastics, as many costs as possible will have to be reduced. Therefore, developing an alternate strategy for the induction of transcription of the genes that code for the enzymes in the pathway of production of the product represents a hurdle to be overcome.

Figure 1 The glucose sensing toggle switch architecture showing individual parts. Toggle switch contains the LacI responsive promoter (trcp), which expresses TetR and mCherry, and the TetR responsive promoter (tetOp) which expresses lacI and gfp. The two transcription are under the control of the opposite’s promoter. The (cAMP) receptor promoter (crpp) activates transcription of lacI when glucose levels become low, turning the switch (ON). Reporter proteins (GFP and RFP) show whether the toggle switch is on or off. Image modified from Bothfeld et al.(Bothfeld et al., 2017)

Bothfeld et al. designed a tandem toggle switch that can be switched (ON) with only altering glucose levels. While this device is still using nutrients (glucose) to induce protein production (Figure 1), the advantage is that with the toggle switch, protein production will continue even if glucose is added back into the system. In their study, gfp was switched out with phaECAB to produce PHB to test the ability of the toggle switch when expressing large genes(~3.5 kb). PHB production was measured using different carbon sources in the media to test if the carbon supplements could maintain high culture density even after glucose had been depleted. They found that media with containing glucose and supplemented with 0.05% and 0.1% glycerol had improved growth rates relative to cells with constitutive expression of the pha operon and similar growth rate to chemically induced expression. The use of glycerol as a carbon source allowed for the toggle switch to maintain growth while not limiting CRP because the switch solely relies on the concentration of glucose. However, the titer of PHB was lower than the standard chemically induced cultures. Yet, their results indicate that a toggle switch can separate growth and production phases.The advantage of the CRP system is that it allows for quick induction because of E. coli’s natural affinity towards glucose over other nutrients like phosphate, nitrogen, or secondary carbon sources(Huergo and Dixon, 2015).

Our iGEM team knew that growth coupled production can limit yield and growth(Soini et al., 2008). By placing this toggle switch before a gene, that gene’s expression could be controlled through concentration of glucose in the medium. This would eliminate the need for expensive inducer chemicals and therefore improve the economics of production as well allowing future iGEM teams to only use one common additive in media. William Bothfeld was contacted about using the toggle switch design in our iGEM project. Bothfeld agreed to send the plasmid maps, and the plasmids pKDL071, pKDL071-TaraF, and pKDL071-TaraF-phaECAB described in the paper.

This project aimed to produce a genetically engineered bacterium that could produce precursors for a biodegradable plastic whose production could be optimized and controlled using a genetic element. Specifically, a toggle switch that would use only glucose as the inducer would be used as a control element. This toggle switch leads to the optimization of expression of a useful enzyme by inducing the transcription of the genes downstream of it as the glucose levels diminish at the peak of bacterial density. This removes the need to add an external (and potentially expensive) inducer to stimulate production of the enzymes responsible for the synthesis of the desired product.

This project was designed to work alongside the other 2018 Edinburgh overgraduate iGEM team projects, advancing our goal of a more efficient and improved production of bioplastics. This project set out to combine several existing genetic elements to create a single plasmid that contained the genes coding for enzymes that could construct a pathway that would optimize the synthesis of PHA in E. coli and to place the regulation of the transcription of those enzymes under the control of a promoter that responded to low glucose concentrations. 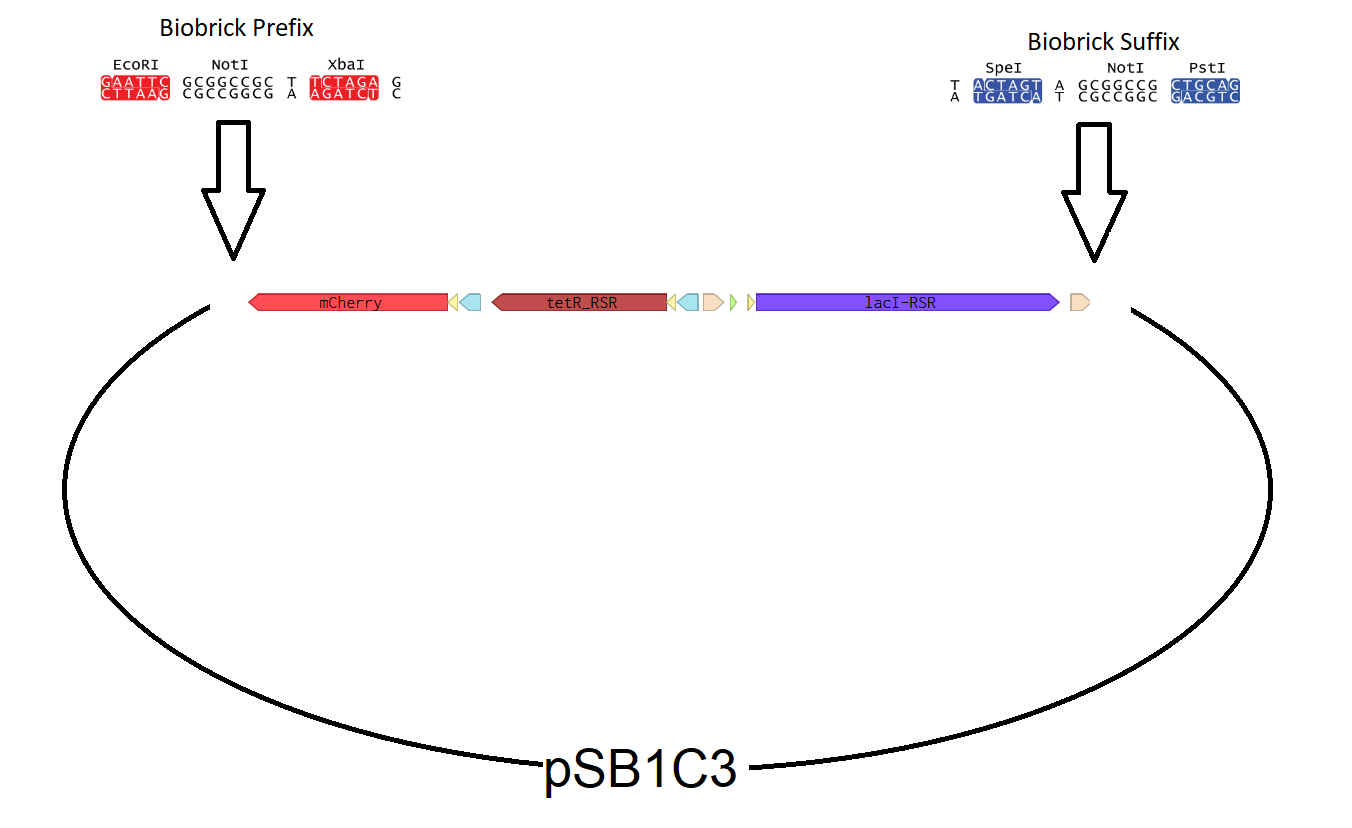 Figure 2 Proposed design for a new toggle switch bio brick. The toggle switch architecture showing individual parts and contains the LacI responsive promoter (trcp), which expresses TetR and mCherry, and a TetR responsive promoter (tetOp) which expresses LacI. The Biobrick Prefix and Suffix would be added on each end and device would be inserted into pSB1C3.

Cloning was carried out in Escherichia coli. DH5α. pSB1C3, gfp (Bba_I20270), and phaCAB operon (Bba_K1149051) were obtained from 2018 iGEM distribution kit. Biobrick plasmids were transformed into DH5α E. coli. pKDL071, pKDL071-TaraF, and pKDL071-TaraF-phaECAB in LacIΔ MG1655 E. coli were given as a gift from William Bothfeld in the Kyo Lab at Northwestern University(Bothfeld et al., 2017)

Using Gibson assembly proved difficult for this project. To remove an EcoRI site, the toggle switch was cloned out in two pieces and mixed with the vector in a Gibson Reaction. 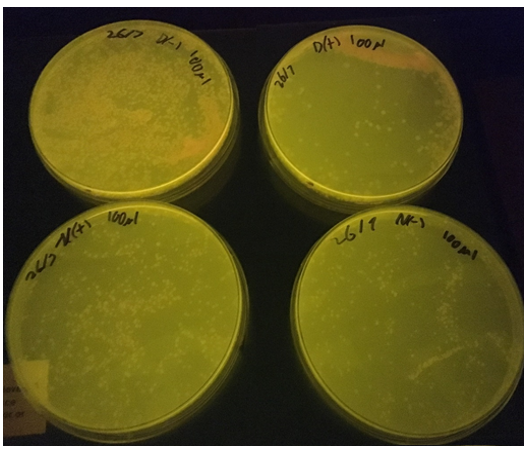 Because half of the toggle switch was inserted into the plasmid, another Gibson reaction using a linear plasmid and Fragment 1 could be used as the vector and Fragment 2 could be added in a higher ratio. Fragment 1:pSB1C3 was linearized using the plasmid Fwd primer and Fragment 1 Rev primer. This was used in a Gibson reaction along with Fragment 2 and DH5α was transformed using this reaction (Figure 4). These colonies were all red, but the number of colonies seemed to be only largely between the DH5α samples if Fragment 2 was added or not. This was as expected because Fragment 1:pSB1C3 can circularize as seen in the original colony.

This project set out to create a new biobrick for the 2018 iGEM competition. This strategy involved removing an EcoRI site from the starting toggle switch and then placing that control element into pSB1C3. Gibson assembly of the two fragments and the backbone proved mostly unsuccessful as it appears that only Fragment 1 successfully ligated into the plasmid for one colony during the Gibson assembly.

To continue to benefit the team it would be useful to try to combine some or a few of our projects into one system to test the efficiency of producing PHBV. Ideally this Biobrick would be able to act as another modular promoter and allow future iGEM teams to only use glucose concentration modulation for simple protein production or for the production of enzymes that would construct a metabolic pathway.