Scaling Up of PHBV Production

Life cycle assessment (LCA) has the capacity of pinpointing the hotspots in a system to allow its improvement with a more sustainable outlook which will definitely benefit the environment as well as the current and future generations. This year, the University of Edinburgh Overgraduate iGEM team engineered PHA production pathway in E. coli. And in this project, LCA analysis was conducted to analyses sustainability of industrial scale PHA production, helping to understand the implication of using a whisky by-product as the feedstock in the production as well as its impact upon the environment.

Since five decades ago, computer simulation models have been extensively used in order to investigate economical and physical implications from experimental alterations, to facilitate in both plant design and business plan. From numerous simulation software available, SuperPro Designer v9.5(Academic Site Edition) (Intelligen Inc.) was chosen to be used here as it is a comprehensive process simulator that supports modelling, evaluation, and optimisation of various pharmaceutical, chemical, food and related processes. Process simulator is a crucial tool and has been used widely especially in the Bioprocess Engineering field. Considering there is limited information regarding industrial scale PHBV production available, we decided to simulate PHBV production that incorporate PHA synthesis pathway that we personally engineered in this project.

We aim to analyse sustainability of industrial scale PHBV production by simulating the process in SuperPro Designer. The result obtained from this was fed into our Life Cycle Assessment.

PHBV production was simulated from the pre-treatment stage of the whisky by-product (pot ale) to the recovery stage using SuperPro Designer v9.5 (Academic Site Edition). Prior to any simulation, batch process operating mode was selected with default annual operating time of 7920.0 h. All components used were registered under Pure Components (such as sodium chloride and carbon dioxide) or Stock Mixture (such as ethanol (10% (v/v)). Unit operations and its respective parameters involved were added and connected with one another to construct the complete simulation setup. The selected unit operations are adapted from various literatures as listed in Table 1.

PHBV production was simulated at a smaller scale (1 L or lab scale) and then upscaled gradually through pilot to an industrial scale. And in this study, the adjustments considered were substrate feeding substrate feeding style, time, and the recovery method. 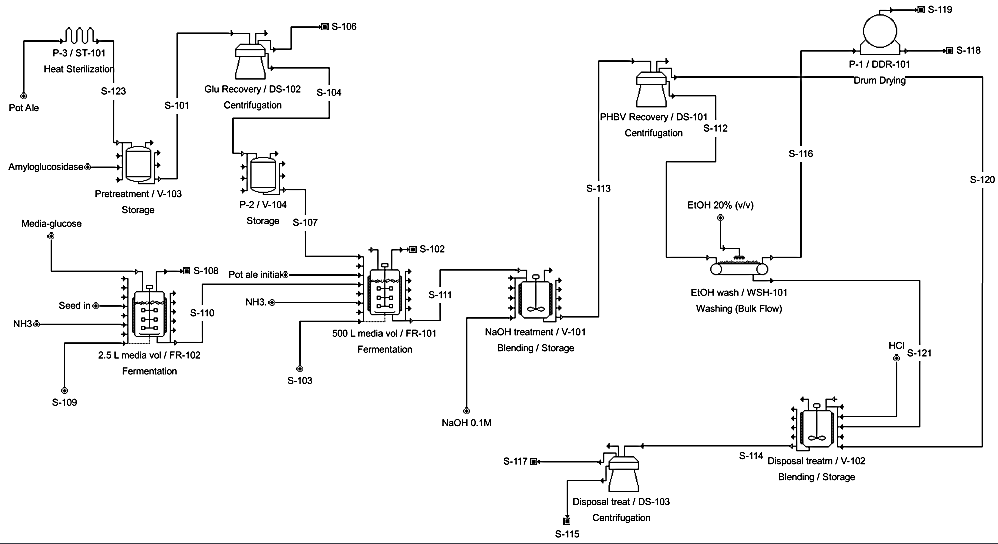 The complete the mass balance of each unit operation is shown in Table 2. One batch of PHBV production using 1,000 L working volume resulted in 42.06 kg PHBV with 94.93% purity and 91.48% recovery yield. The entire system required 8.79 days to complete.

The simulation had provided insights into the efficiency of the proposed process. This will certainly need to be further optimized before being implemented in large scale.