TALE2 stabilized promoter 1 is our favorite and the most characterized member in the TALE stabilized promoter collection. It has been tested to drive GFP expression and geraniol synthesis operon (GPPS and GES) expression on low, medium, high copy vectors and was also inserted into the attB locus of E. coli genome. It has shown an extraordinary potential of gene expression stabilization and geraniol synthesis — the highest geraniol titer we obtained, 94.5mg/L, was achieved using TALE2 sp1. 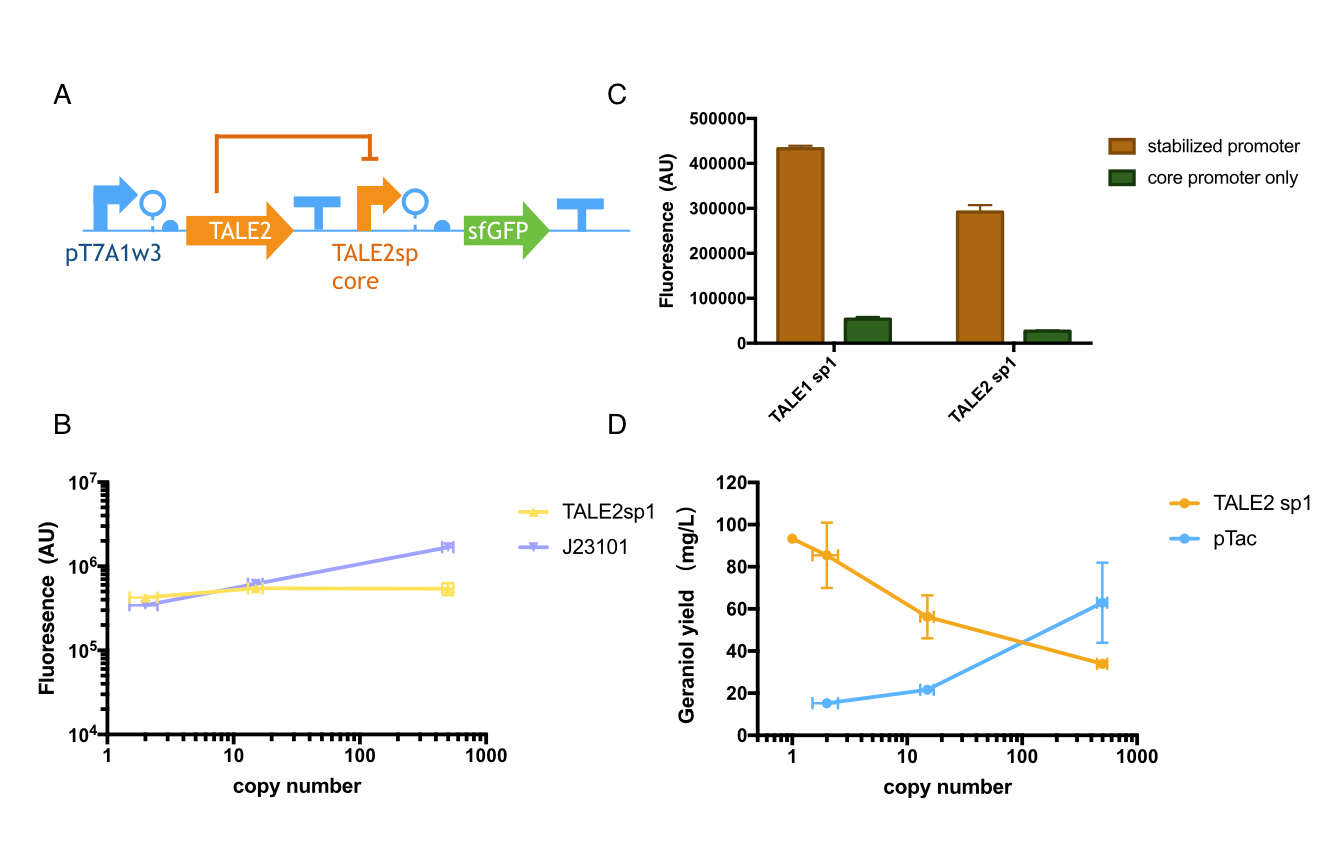 Figure. 1 An overview of TALE2 sp1 and its performance. (A) The composition of TALE2 sp1 includes the genetic circuit encoding for TALE2 regulated by a constitutive promoter pT7A1w3, and the core promoter that TALE2 represses. Reporter genes like sfGFP etc. can be added downstream. (B) Performance of TALE2 sp1 relative to J23101 consensus promoter driving GFP expression. (C) Fluorescence characterization of TALE1 sp1 and its core promoter, TALE2 sp1 and its core promoter upon genomic insertion into the attB locus. (D) The change in geraniol yield across different copy number when using TALE2 sp1. From left to right, the first point presents the geraniol titer obtained when the operon was inserted to genome, which is 94.5mg/L, the highest level in this study. The second, the third and the fourth are values of geraniol titer when placed on pSC101, pR6K, and pUC20 respectively.

All promoter members were cloned onto three backbones:

An identical sfGFP is placed downstream of all promoters as a reporter gene. Three constitutive promoters: J23119, J23101, J23105, with the same sfGFP downstream were characterized along with the TALE promoters as a reference. The green fluoresce was measured by flow cytometry. (see methods in our Notebook).

In comparison to J23101 consensus promoter which is not stabilized, the GFP expression measured by fluorescence remains basically unaffected by the change in copy number when used TALE2 sp1, proving the stability that TALE2 sp1 can achieve on plasmids backbones. To verify the stability of TALE2 sp1 and its counterpart TALE1 sp1, we inserted them as well as their core promoters alone the sfGFP into the attB locus of E. coli genome using pOSIP. And after genomic integration, TALE2 sp1 has maintained previous expression level regardless of this change whereas it core promoter’s level of gene expression sharply decreased. So we are assured that TALE2 sp1 also achieve good stabilization used in genome — no retuning need!

TALE2 sp1 was combined with the geraniol synthesis operon, and this combination was cloned onto plasmids of different copy number as well as inserted into the genome using the same pOSIP plasmid.

The plasmid vector constructs were transferred along with upstream pMVA providing precursors into strain E. coli DH5α. We have conducted shake-flask fermentation experiments lasted for 24h upon 25μM IPTG induction and the result shows detectable geraniol production by each strain.

In the case of pTac, it fits into the scenario when the gene expression is lower than the optimum: higher copy produced more enzymes to catalyze geraniol synthesis reaction. As for TALE stabilized promoters, the expression level of enzymes would remain unchanged regardless of copy number due to the stabilization nature of TALE sp. So in low copy vector where the cellular burden isn’t significant, the product yield is only related to the strength of the promoter, explaining why TALE sp2 has better performance than the rest of TALE sps as it’s closer to the optimum. But when the copy number increases, the expression level is unaffected while the cellular burden rises sharply because much more TALE would be made to stabilize expression, leaving less energy available for geraniol synthesis. And it in turns answers why a negative trend of production is shown when regulated by TALE sp.