We hosted a workshop on synbio and its application, and hold an exhibition of our project in the international Maker Faire. We discussed with audiences including artists, students, investors and engineers who inquired about the safety and potential of synbio eagerly. And engineers and artists established long-term collaboration with us on applied design. We closely engaged with neighborhood, urban management agencies and animal welfare groups, presenting how microbial factory can integrate with cat shelter we built to solve the problem of feral cats. Through direct interviews, in-depth conversations, presentations or polls, we learnt their concerns and how synbio-related design can be better accepted by the public. Innovatively, we connect with people in art field by holding activities which allow the public to draw and design the cat shelter. Moreover, we filmed a series of documentaries to reach even further, by uploading them on popular media platforms.

Hosting a talk on synthetic biology, iGEM, our project and its application on stray cat problem

(Download a pdf version of our presentation powerpoint here.)


We gave a bilingual talk named ‘SynBio, Cats and ChangeMakers’ at on synthetic biology and its application, introducing our iGEM project in specific as one example of what synbio was capable of doing. Then we discussed our ultimate scheme of building a street cat shelter with biosynthesized nepetalactone as attractant that could aid volunteers in helping feral cats. (See Applied Design for the development of our design.)

Our audiences include students, neighborhood committee members, engineers, designers, artists and investors, who demonstrated great curiosity at the field of synthetic biology and engaged enthusiastically in discussions concerning synbio and our project after the talk. We had audiences who inquire about the possibility of initiating their own synbio project at the maker space or at home, so we gladly filled in knowledge about biosafety lab requirements we had, shamefully, missed out a bit on during the talk. Some asked in details how we found the desire pathway of biosynthesizing nepetalactol and whether computer simulation could aid the design, and we offered several databases that might be of help. Though we must admit due to lack of sufficient knowledge in computational tools, we were unable to explore further concerning the latter question. Afterwards, many participants demanded us to tell them more interesting iGEM projects, which we shared with delight. During this experience, we noticed how starting with innovative iGEM projects and the application of synbio can help engage audiences before we filled them with the engineering principle behind. However, it was necessary to discuss biosafety and bioethics, especially facing listeners who enjoy creation. More offered keen advice on the Kitty Wonderland prototype, such as how volunteers could supervise the shelter and how the shelter might be able to alert volunteers when several cats are present, so volunteers can come, feed or trap cats for neutering and vaccination. 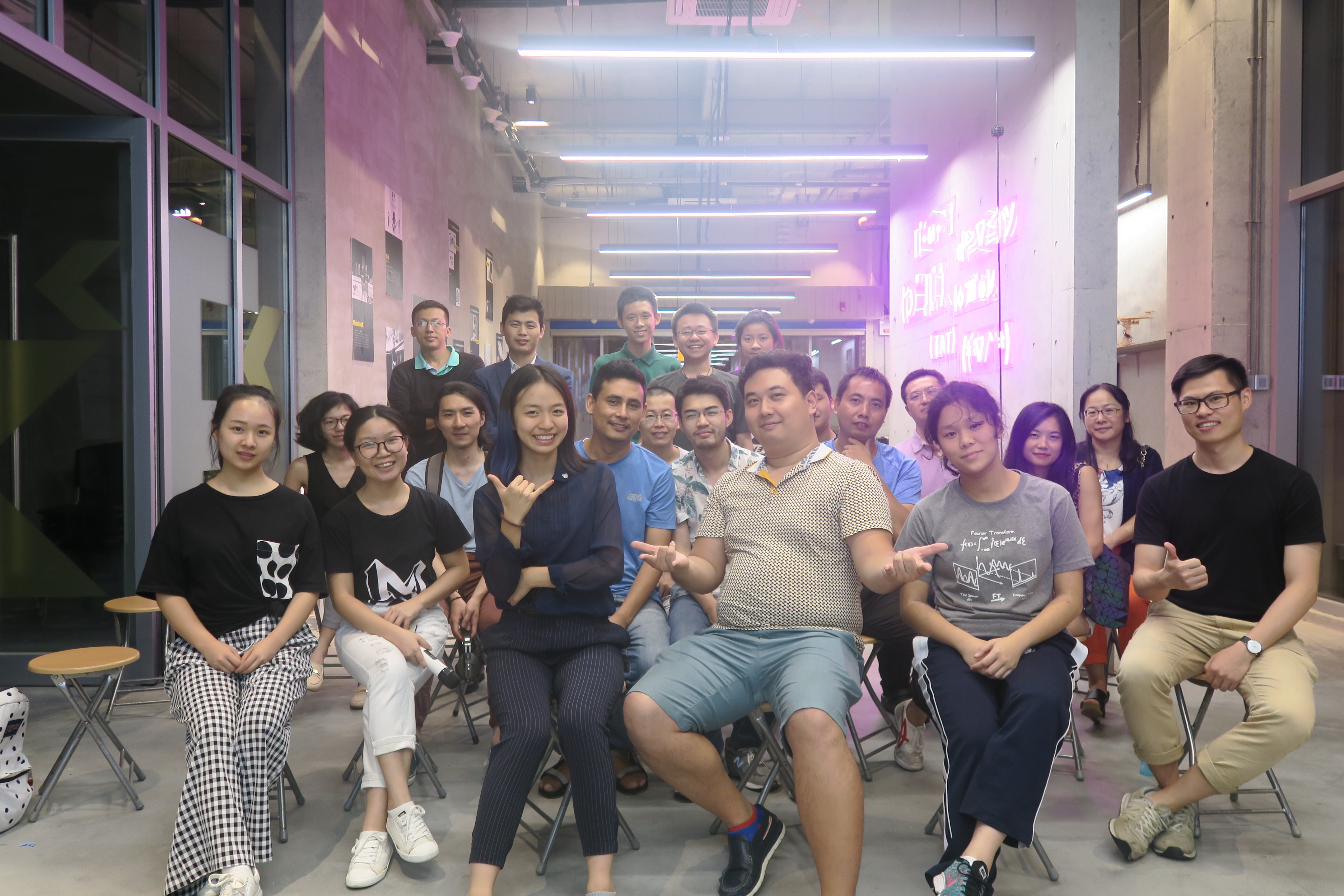 Group photo of some of the participants.

Discussions with animal-welfare groups, neighborhood and local government on the applied design of our project

Our applied design, the cat shelter, aims to help volunteers who care about the welfare of feral cats. So aside from engaging with Fenghua Li’s volunteer group in the first place, we also participated in an event advocating civilized rules for pet keeping, in which we interviewed participants, who were considering adopting pets, about their opinions on a cat shelter using nepetalactone as attractant being placed in their neighborhood. They pointed out we could organize residents who fed feral cats occasionally to manage the shelter through connecting with neighborhood committees. Aside, some said their neighbors might not want feral cats gathering near their residents, so we needed to consider where the house should be placed cautiously. 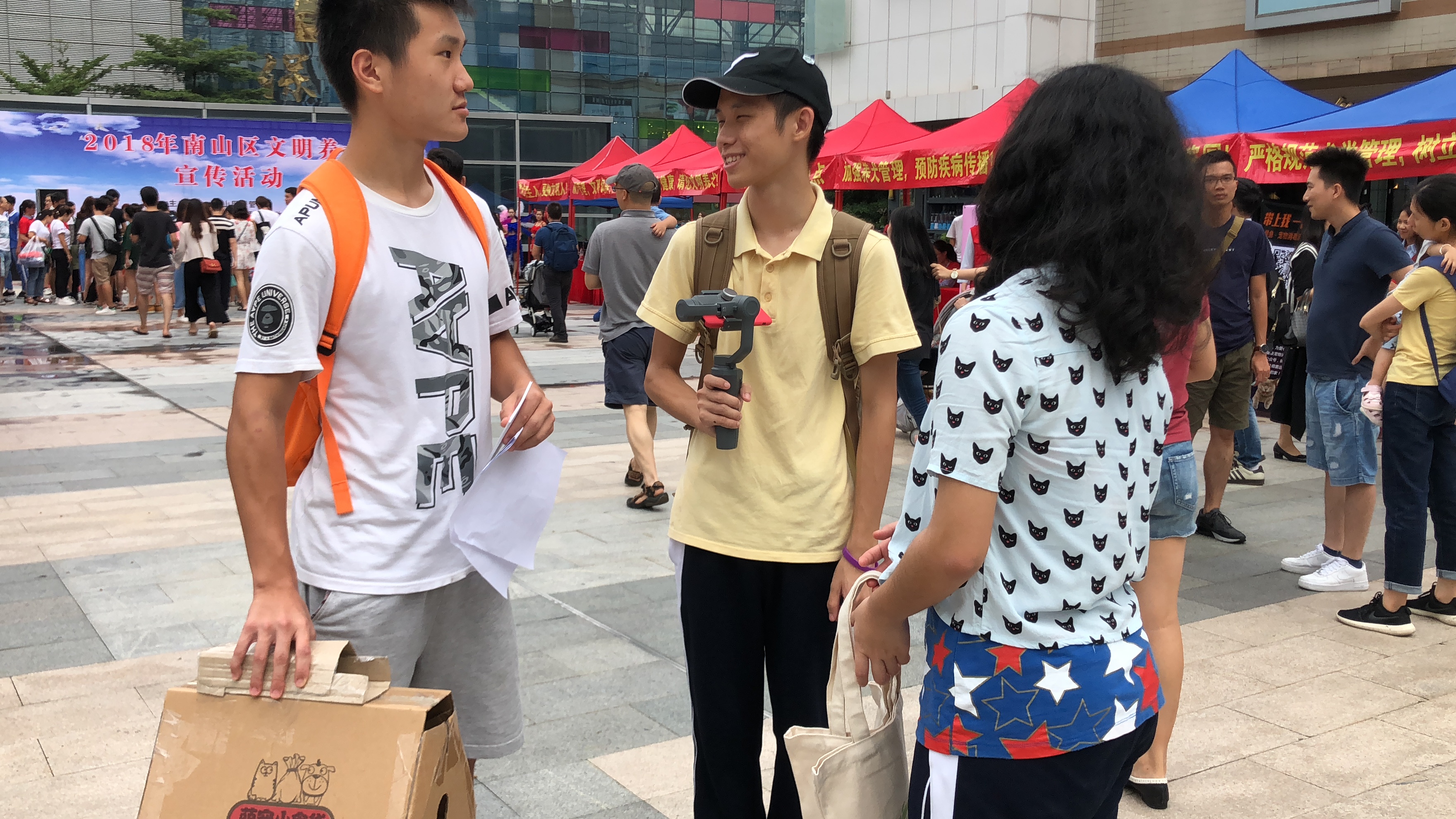 Lucinda, Eden and Rocky: Ready for interview at the event advocating civilized rules for pet keeping.

Together with a talk on our design at an animal welfare event, we gained more insights into the problem of feral cats and how our design might be of use to the volunteers and feral cats through conversing with members from welfare groups including the director of , . Also joining the panel is from the Society for the Prevention of Cruelty to Animals. 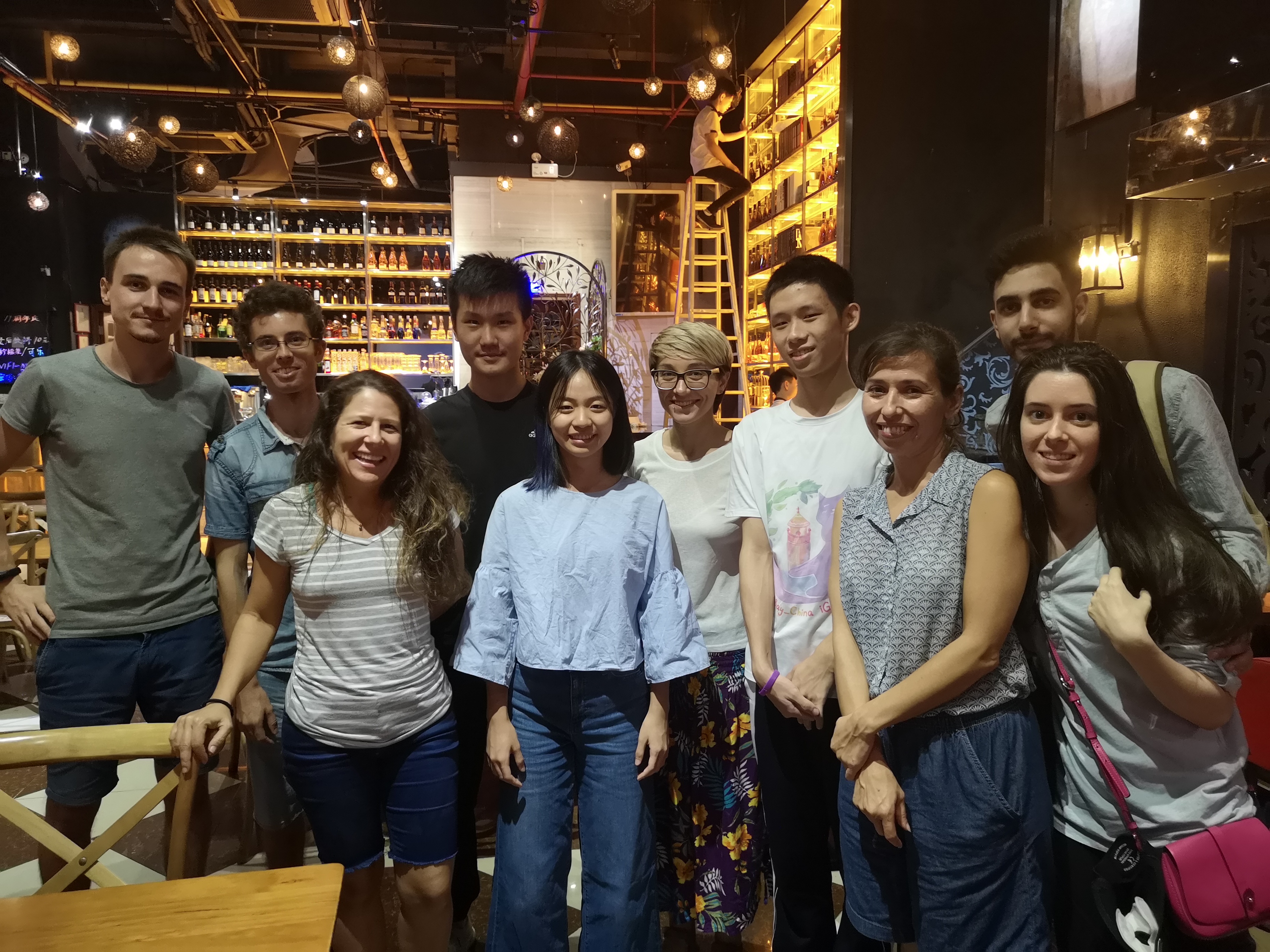 Event at Greenz Drinks. Members were introducing our project to other animal welfare advocates.

Driven by these suggestions and questions, we went on to consult urban management agencies as to know how and where we might place the cat shelter in the neighborhood.

With the prototype of Kitty Wonderland, we exhibited at an international Maker Faire, in which we introduced our synbio and our project to viewers based on previous content at x.factory and asked them to decorate the wooden cat shelter by drawing elements such as cats, E.coli, yeast, pipettes and structural formula of DNA and nepetalactol.

Following the successful demonstration at the faire, we intend the wonderland and synthetic biology to children in school, teaching them basic concepts of synthetic biology and raising their awareness on the problem of stray cats. Afterwards, children can decorate the wonderland with markers and paper cuttings, so as to cultivate their DIY skills and reinforce what they have learnt through arts. 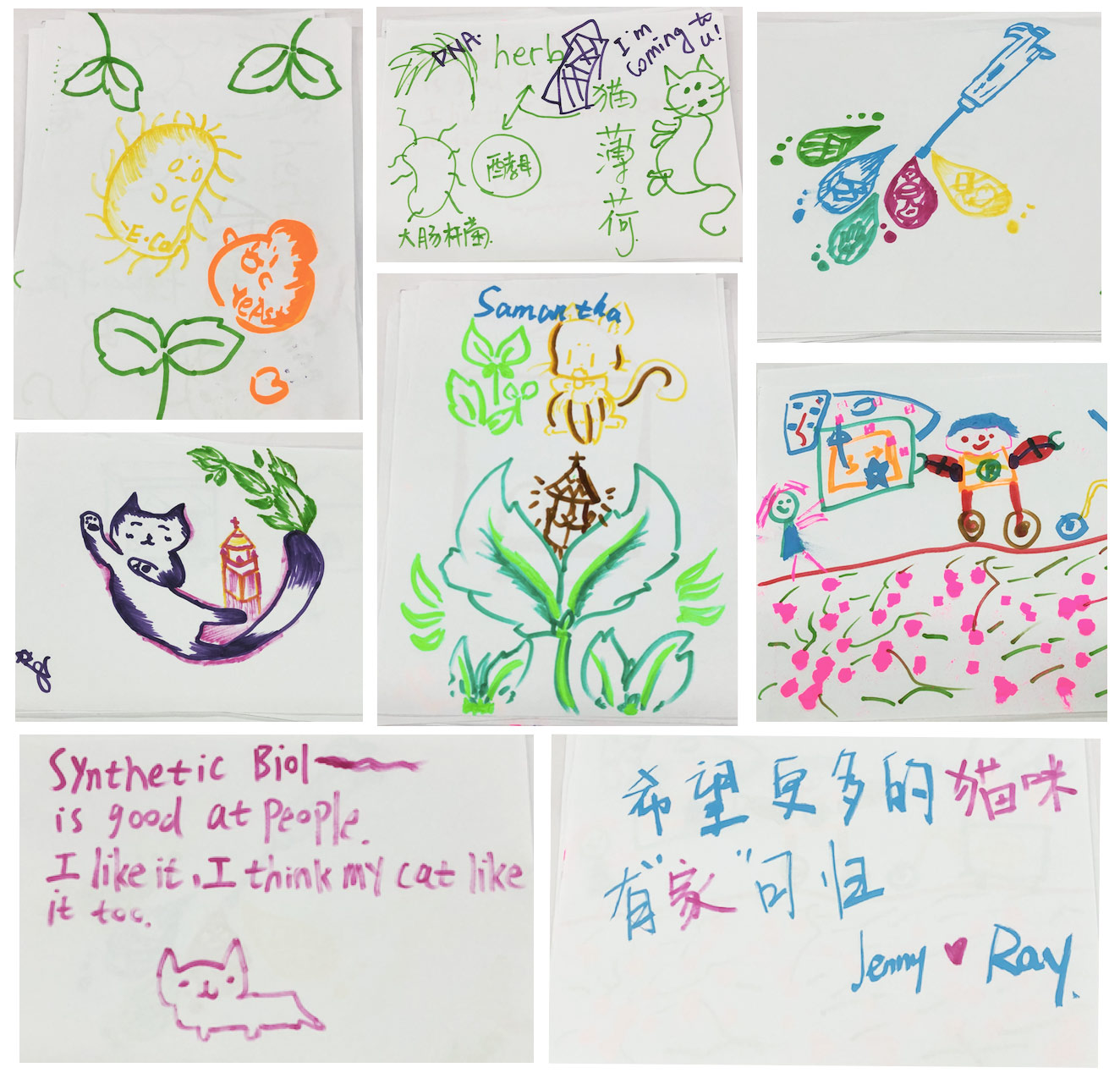 Some of the paintings by viewers.

After we introduced how amazing things synbio can do to children, they drew their vision of synbio.

Our design and the whole story of our human practice is in fact, not merely confined in the 1,000 words we have written above. During the way to the proceeding of our lab project as well as our endeavor to let the world improve our project and meanwhile influencing the world, we have done a lot. We record and recall the entire story and make it into a documentary series. The documentary shows how we spared no efforts to conceive our human practice and communicate with the externality to contribute to solving the stray cat problem.

Episode 0: Fenghua Li, we intimately call her ‘Aunt Li’, is the sponsor of the organization ‘Li Fenghua stray cat rescue’ in Beijing. She persists in feeding, neutering and saving stray cats for 20 years without a single day-off. She rescues cats as a full-time profession. However, the cat shelter she built was destroyed by an arsonist two years ago and after that the government was prohibiting the construction of new cat shelters. Thence she had to roam across the city to feed those helpless creatures and to catch and to neuter them as well as to treat them when they are injured or sick, whereas when Aunt Li was injured or sick she had to carry on. Moreover, Aunt Li is suffering from osteoporosis for many years. Her life is a hardship even though a lot of people gave her hands. GreatBay_China helped her in raising funds and public awareness.

This video starts with Rocky on his way to interview Aunt Li and ends with Aunt Li’s future expectations and how we helped her.

Episode 1: The stray cats roaming in the city is actually a very serious problem in many parts of the world because they can transmit diseases, annoy human by their calls for mate and disrupt the ecological stability. The current solutions to the stray cat problem are not very effective.

Episode 2: The idea of our human practice and hardware design—‘the kitty wonderland’ emerged when we heard that capturing stray cats is difficult and we found the potential of nepetalactone to attract cats. However, to make the ‘wonderland’ come true is hard. This episode starts with a stray cat seeing our hardware and sighs light-heartedly.

Episode 3: We collaborated with professional designers in a maker space—X.factory to consolidate our design of the ‘kitty wonderland’. We have made several improvements.

Episode 4: In order to ensure our kitty wonderland’s safety and smooth implementation, we surveyed a lot of people including citizens, NGO administrators and government officials. We made several improvements after the survey.

Episode 5: We draw out, model and demonstrate our final design.

We uploaded the entire series onto a well-known Chinese video website, bilibili.com, under the ID 'CuL8er', to spread our idea. You can also visit this website and search the ID if you want to watch our videos in higher image quality.

Script and storyline for documentary video.

Where: Shenzhen University
When: 6 May
Hosted by: SZU_China

Officially presenting our project mCATNIP to other iGEMers for the first time, we introduced the key element in project design — chassis specialization, and our human practice plan for applying the microbial catnip to feral cats rescue. Many questions have been asked regarding the human practice of mCATNIP: why is this method better than the existing ones, what if the use of catnip increased the level of aggression among feral cats etc. We were very glad to hear suggestions from other teams. Meanwhile, we listened to the presentation of other teams and exchanged opinions.

High school iGEM teams have relatively fewer resources available to them compared to the graduate teams. Therefore GreatBay_China and SFLS_Shenzhen hosted the Shenzhen High School Meetup together for sharing our resources conveniently with others Shenzhen high school teams as well as finding in what ways could we collaborate. Teams presented their projects, and we invited our advisor Yiming Dong to give feedbacks.

From Jun/24 to Jun/26, we participated in the EurAsian Meetup organized by the teams TUDelft and BGI-College. We spared no efforts to present in an interesting and educating way and engage other teams. During the meetup, we received suggestions about the project (including how to convert nepetalactol to nepetalactone, what variables should be concerned in the co-culture system, etc.), presentation, poster and even mathematical modeling from various teams like TUDelft, EPFL, XJTLU China and SCUT China.

Apart from obtaining suggestions, we also spread out idea effectively during the meetup by presenting as well as communicating with other teams. Our presentation in the meetup received the award as one of the two ‘Best Presentation’ teams among all. During the discussion, because of our teammate Rocky’s special talk on his understanding of biosafety, he was interviewed by TUDelft as a part of their human practice.

We also learned the essence of biosafety during the meetup, which helped us a lot when we were conducting our human practice after the event. We discovered that the key idea of ensuring biosafety in our project is through ‘Value Sensitive Design’, which is to contemplate whether our product will violate the rules in biosafety or challenge bioethics and use these concerns to improve our product to make it safer. We almost applied the strategy of ‘Value Sensitive Design’ extensively throughout our human practice. 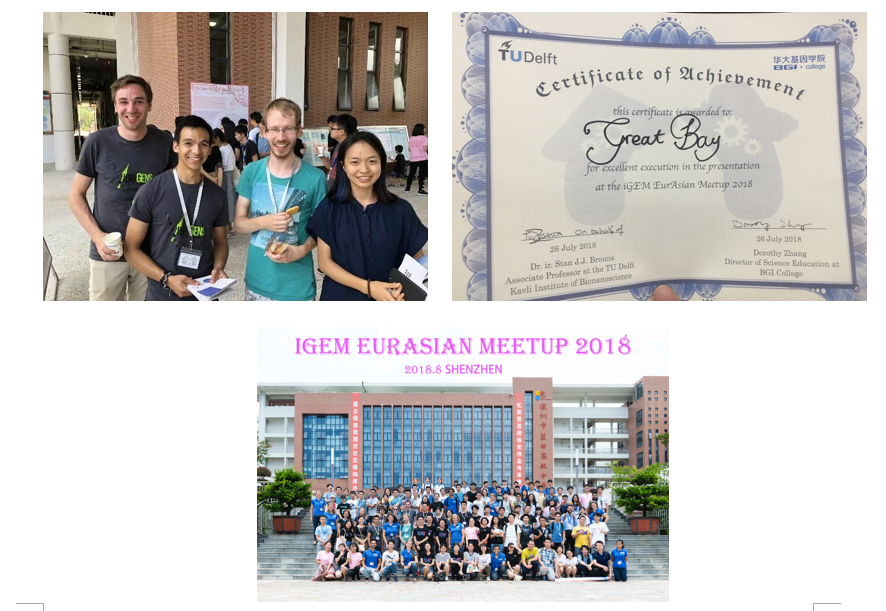 Photos taken at the EuroAsia Meetup.

Where: Shanghai
When: 27 August ~ 31 August
Hosted by: ShanghaiTech

Lucinda Lin and Sean Yao represented our team to attend the 5th Conference of China iGEMer Community. We have gained much useful experience during the conference by not only communications with other teams but also feeling what it was like to be a judge. We received advice on our presentation and posters meanwhile sought help for yeast genetic circuit designs.

Photos taken at the CCiC.