Emerging as a sometime neglected issue, stray cats affect both human society and ecology to a much larger extent than we assumed. Relevant organizations do provide astonishing details that allow us to infer how tremendous the number of stray cats is: every year, animal caring centers in the USA need to accommodate around 3,200,000 stray cats[1], and in Singapore, 2,274 stray cats were taken in 2017 just in one province. The leading cause of this enormous number is the desertion of household cats onto the street, allowing their progeny to join the army to roam down the road. (According to a study carried out by Tennessee State University and California university, )A fertile couple of stray cats could get born 420,000 kitties in the following seven years. The progeny of stray cats is the main reason for the rocketing number of street cats. 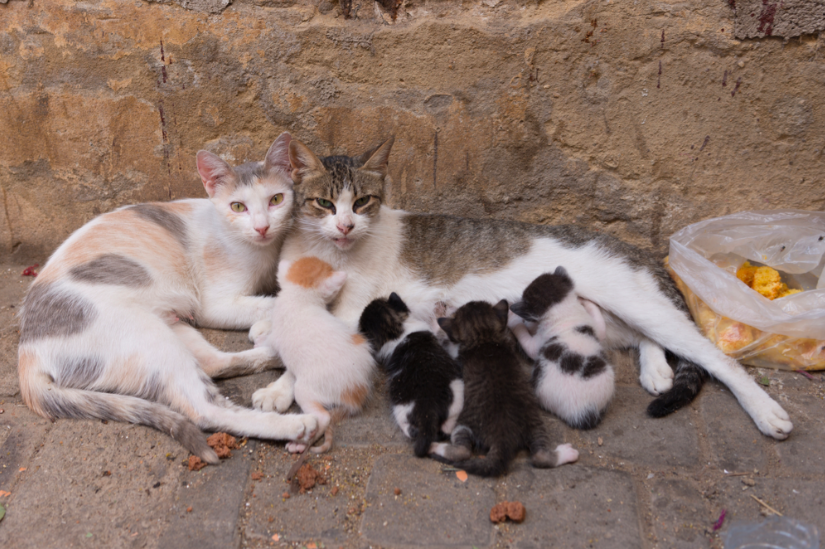 Astonishingly, stray cats also post an immense threat towards biodiversity, which is unrealized by the general public. Without human owners to provide food, feral cats have to rely on their predatory nature to survive, preying on smaller animals. In 2016, research published in Proceeding of the National Academy of Sciences (PNAS) suggested that invasive mammalian predators have contributed to 58% of the extinctions of birds, mammals, and reptiles globally over the past 500 years. Feral cats, as the leading perpetrators, are linked to the extinction of 63 species. With this knowledge, Dr. Doherty leading this research called for prioritised management of invasive predators to protect the vulnerable endemic species[2]. Moreover, research of the American Bird Conservation Association suggests that cats are the ‘second greatest killer’ of bird species, with the first one being habitat destruction. 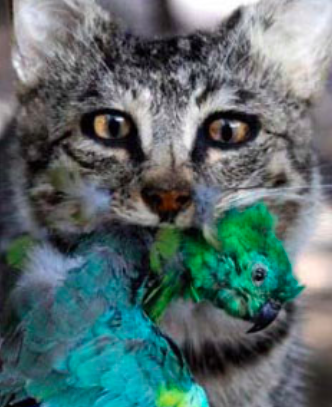 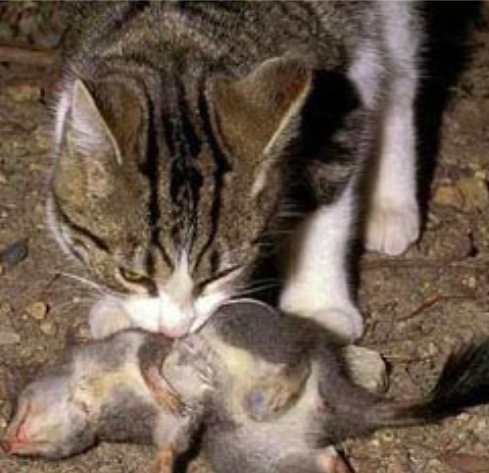 
This video briefly demonstrates this problem.

Why is the cat so startled? Let’s check the next episode. The previous episode is about the interview of Fenghua Li, a well-known stray cat rescuer in Beijing, China’s capital.


Though, the reaction of people towards the surrounding street cats is not always kind. In 2016, an amount of 15 cats were found dead in a neighborhood, possibly poisoned by the dwellers; and in 2017, staffs in Shanxi Agricultural University were forced to chase away mobs of stray cats because they flocked inside to the campus and attacked students. Affairs of stray cats behaving aggressively to human or the other way around are countless in China nowadays that people are forced to take these incidents with high vigilance, urging to regulate the scale of stray cats. Inevitably, the battle will end with the fatigue of stray cats that no one wishes to see.

Trap-Neuter-Release (TNR) is the most accepted method for stray animals population control widely-accepted by major authorities, as it’s very plausible, effective and humane. The process of TNR, as stated by the name, includes: first, confining the animals so that caregivers could let them receive medical care, since vagabondage has usually rendered animals physically unhealthy; second, neutering to prevent the production of more roaming animals; then, having been neutered and rehabilitated, benefactors can put the animals back into where they belonged or help them find adaptation. Through mercy and humanity, TNR is the best way of reducing the populations of stray cats without any massacres and blood-shedding scenes. Moreover, complaints are reduced when cats no longer experience their oestrus (which is often correlated with noises and foul odors).

For years, researchers and animal lovers have been assessing this method in different ways. From 1998-2005, researchers at Randolph University carried out a comparison between six TNR colonies and 3 unsterilized colonies[3]. By the end of the experiment, one colony that formerly had 10 cats was reduced to none and another colony of 10 reduced to one[4]. Similar research is carried out during 1991-2002 in University of Central Florida. The students there held 155 cats and practiced TNR to them. By the end of 11 years, the number reduced to 6[5].

Although the results of TNR seemed outstanding, many practitioners were stalled in the first step of TNR — Trap.

Start cats are famous for their wildness and never succumbing. This disposition has led to maniac revolts and self-injuring destructions when people try to trap them. All being animal lovers, people who carry out TNR always put the welfare of cats in the first place. The risks of injuring the cats had often back them off, even when capturing them is for their higher benefits. Thus, the success of TNR is limited by how well the stray cats would react to a trap.

This practical issue must be overcome if people long a safe and effective way of protecting and annihilating cats, which has brought us the idea of improving the tool for TNR. 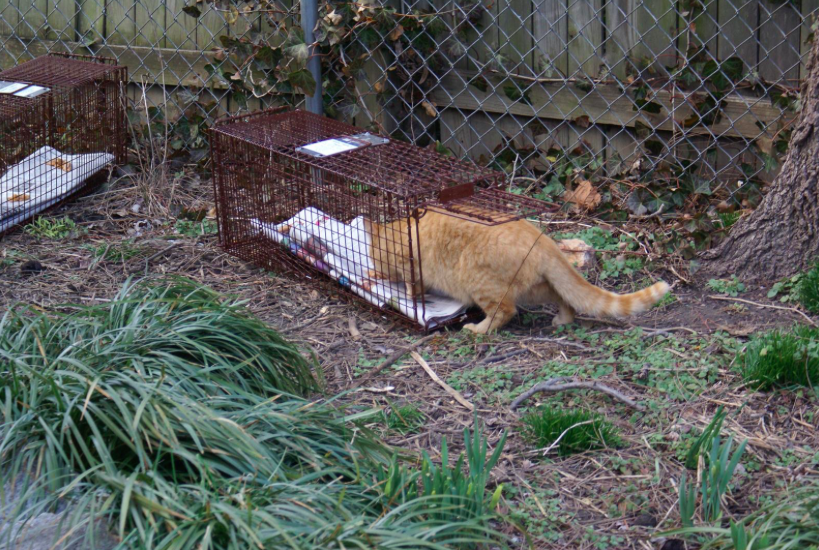 Having noticed it was the difficulty in capturing cats that largely impeded the executive of TNR, we realized that the feline-attracting characteristic of nepetalactone could be of great help. (For more details on why nepetalactone appeals felines, see Project Background) Compared to cage traps and usual food lure, the pleasant scent of nepetalactone in catnip would appear to cats less of a pitfall, therefore more easily let down the guard of stray cats. With this need clearly identified, we devised brand new hardware which can attract and seize stray cats when needed, provide cats with comfortable and secure shelter, and contains an auto feeder to reduce the workload of the volunteered caregivers. With a beautiful wish that this device would be promised land for the roaming cats, we named it “Kitty Wonderland.” 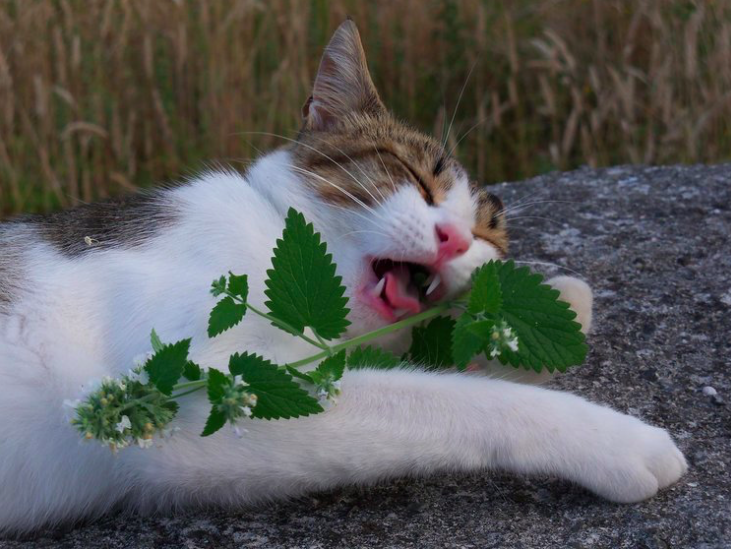 In order to solve the stray cats problem, we devise this hardware, the Kitty Wonderland, to provide homeless stray cats with shelters which could offer them a safe, comfortable and permanent living environment. Through the interviews and discussions we made with specialists, officials and residence, we improve our hardware to combine the merits of existing methods like Trap&Neuter&Release. The hardware assists volunteered caregivers by attracting stray cats and capturing them if necessary, so the difficulties and costs in tracking and taking care of stray cats are greatly reduced. Besides, we apply nepetalactol, which is the focus of our project, to our hardware to make it more effective in attracting cats and emphasize the significance of our project. Finally, our hardware can be easily deployed on various locations in the community where it stresses the stray cats problem to a broad population in an original approach.

Stray cat is a thorny problem, but we proposed an innovative solution coherent to our project. Through a number of online and field research, we perceived the severity of this problem and broadened our perspective. We thoughtfully incorporated ‘value sensitive design’ throughout our human practice, connecting different stakeholders from the society. In practice, we communicated with stray cat rescue teams for advice, and collaborated with organisations like Maker Space and environmental NGOs to get more information, and furthermore, raise public awareness on this issue. We interviewed many citizens to collect comprehensive opinions and suggestions, which make our design more viable. Moreover, we inquired laws and regulations from relevant governmental departments to community level in order to ensure smooth implementation of our applied design. Above all, we have made a series of documentary about our human practice and the process of conceiving, building and improving our applied design: “Kitty Wonderland”.

We hosted a workshop on synbio and its application, and hold an exhibition of our project in the international Maker Faire. We discussed with audiences including artists, students, investors and engineers who inquired about the safety and potential of synbio eagerly. And engineers and artists established long-term collaboration with us on applied design. We closely engaged with the neighbourhood, urban management agencies and animal welfare groups, presenting how a microbial factory can integrate with cat shelter we built to solve the problem of feral cats. Through direct interviews, in-depth conversations, presentations or polls, we learnt their concerns and how synbio-related design can be better accepted by the public. Innovatively, we connect with people in the art field by holding activities which allow the public to draw and design the cat shelter. Moreover, we filmed a series of documentaries to reach even further, by uploading them on popular media platforms.

Our design and the whole story of our human practice is in fact, not merely confined in the 1,000 words we have written above. During the way to the proceeding of our lab project as well as our endeavor to let the world improve our project and meanwhile influencing the world, we have done a lot. We record and recall the entire story and make it into a documentary series. The documentary shows how we spared no efforts to conceive our human practice and communicate with the externality to contribute to solving the stray cat problem.