The InterLab protocol aims to address these issues by providing researchers with a detailed protocol and data analysis form that yields absolute units for measurements of GFP in a plate reader. We were invited to participate in the Fifth International Interlaboratory Measurement Study. The goal of the iGEM InterLab Study is to identify and correct the sources ofsystematic variability in synthetic biology measurements, so that eventually, measurements that are taken in different labs will be no more variable than measurements taken within thesame lab. In order to compute the cell count in our samples, we use two orthogonal approaches:
Converting between absorbance of cells to absorbance of a known concentration of beads.
Counting colony-forming units (CFUs) from the sample.

By using these two approaches, we will be able to determine how much they agree with each other, and whether using one (or both) can help to reduce lab-to-lab variability in measurements.


We followed the protocol provided by committee and finished all the measurement during July.

Day 2: 2 colonies were picked from every transformation plate respectively and inoculated in 5-10 mL LB medium + Chloramphenicol. Then the cells were cultured overnight (16-18 hours) at 37°C and 220 rpm.

Day 3: Firstly, three measurements were took: an OD 600 reference point, a particle standard curve, and a fluorescein standard curve.
To obtain a conversion factor to transform our absorbance (Abs600) data from the plate reader into a comparable OD600 data from spectrophotometer, LUDOX CL-X (45% colloidal silica suspension) was applied as a reference point. 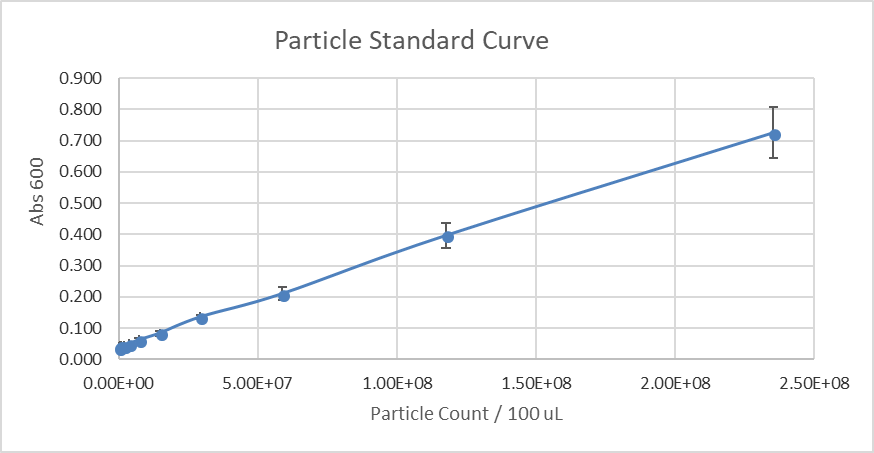 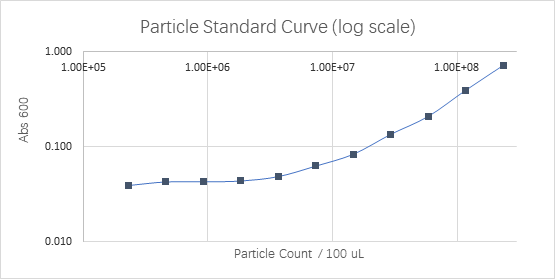 A dilution series of monodisperse silica microspheres was prepared before measuring Abs600 in the plate reader. This measurement allowed us to construct a standard curve of particle concentration which can be used to convert Abs600 measurements to an estimated number of cells. 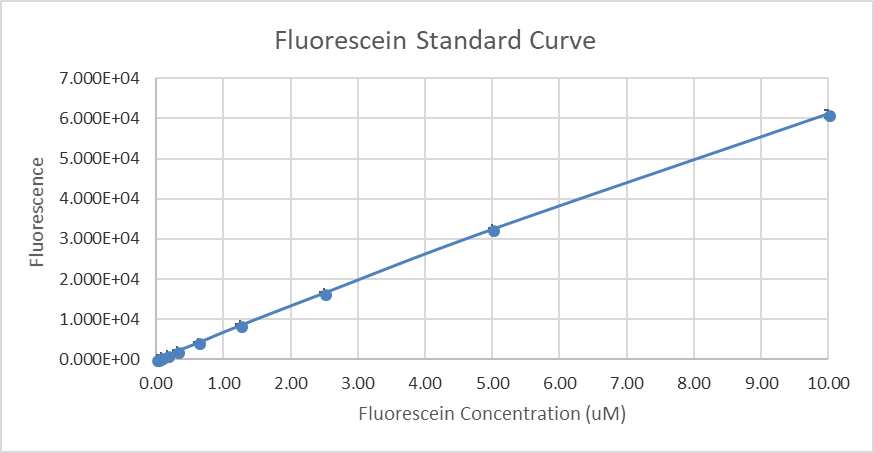 Fluorescence values reported by plate readers in arbitrary units that vary widely from instrument to instrument. Therefore, absolute fluorescence values cannot be directly compared from one instrument to another. In order to compare fluorescence output to test devices between teams, it is necessary for each team to create a standard fluorescence curve. Although distribution of a known concentration of GFP protein would be an ideal way to standardize the amount of GFP fluorescence in our E. coli cells, the stability of the protein and the high cost of its purification are problematic. Therefore, a small molecule called fluorescein, which has similar excitation and emission properties to GFP, but is cost-effective and easy to prepare was used.

Secondly, we did cell measurement. From 0 hour to 6 hour, we did CFU measurement and coated all 36 plates. After that, we measured Abs600nm and fluorescence of the cultures in the 96 wells plate in the plate reader. 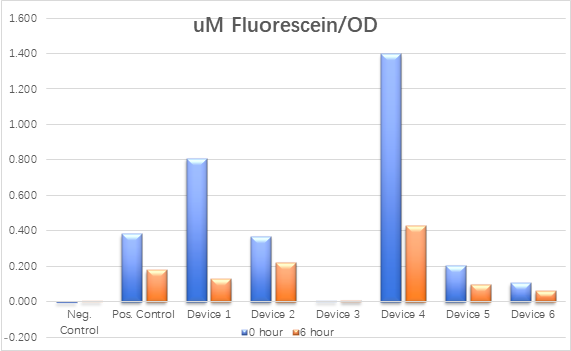 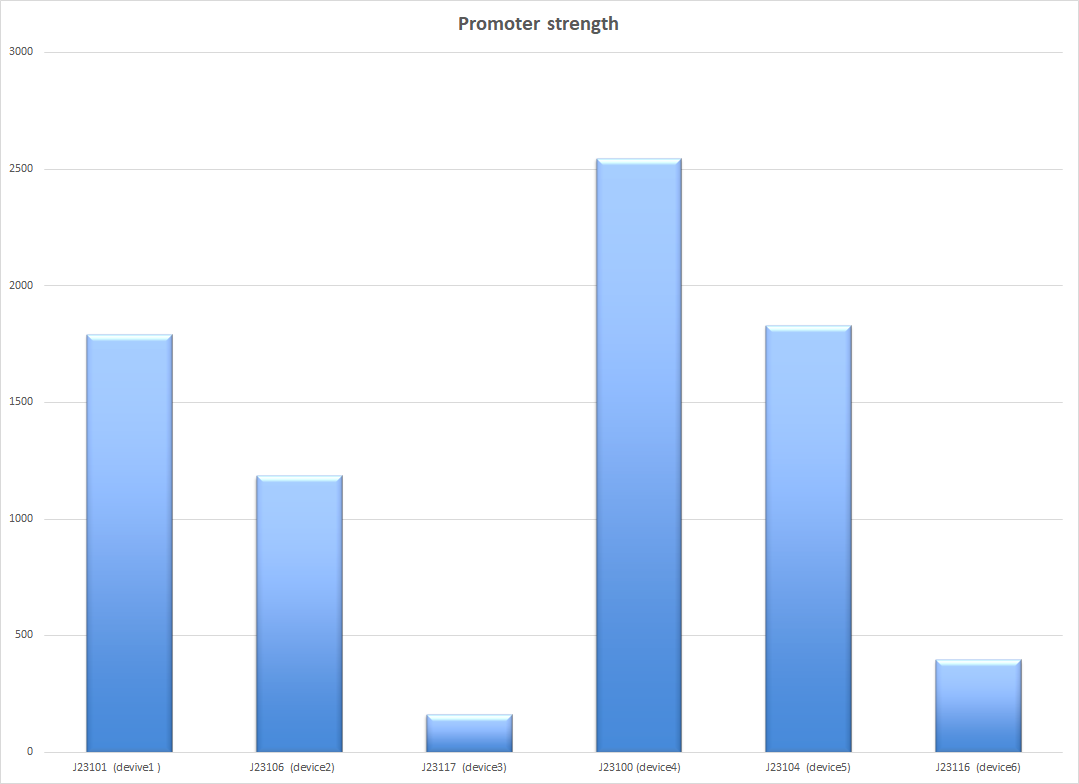 Promoter strength of each device were collected from the Part Registry, and were recorded as a chart to make a prediction of our experiment result. After the cell measurement, the experimental data were also collected and made a chart, which allowed us to make a comparison between the existed data and data derived from this experiment. As the diagrams showed above, these two charts have a similar trend in promoter strength in every device, demonstrating that our experiment data achieved the expectation.
Interestingly, we’ve met several difficulties while doing the cell density measurement. Initially, time that cost by dilution of bacteria and pipetting an exact volume of LB medium was too much, which led to a difference in real concentration of the co-culture mixture from what we calculated before. In order to solve this problem, our bacteria seed samples were put into ice bucket before getting the co-culture mixture. Theoretically, Escherichia coli would stop growing briefly when we placed it in ice. Another problem was the consumable items and material of this experiment, such as 50 ml Falcon tubes and LB + Cam plates. In our interlab protocol, 16 50ml Falcon tubes and 36 LB + Cam plates were required in one time. Except for the 36 LB + Cam plates, we also needed a great deal of plates for transferring and plate streaking, which meant that we had to place all these plates in our lab. For that, we had to clear our incubator and fridge up. Finally, we completed our interlab measurement successfully!

Day 4: Colonies on every plate with fewer than 300 colonies were counted. Our experimental data can be seen here.