As one of the foundations of sustainable development, metabolic engineering rebuilds and optimizes metabolic network as well as regulatory pathways within cells to enhance production of native metabolites or to endow cells with the ability to produce new products. These products include fuels, chemicals, foods, feeds, and pharmaceuticals[1,2]. In order to improve the titer and yield of the target product, both the over-expression of genes responsible for target compound production [3,4,5] and the deletion of genes responsible for by-product synthesis [6,7,8,9] are required. 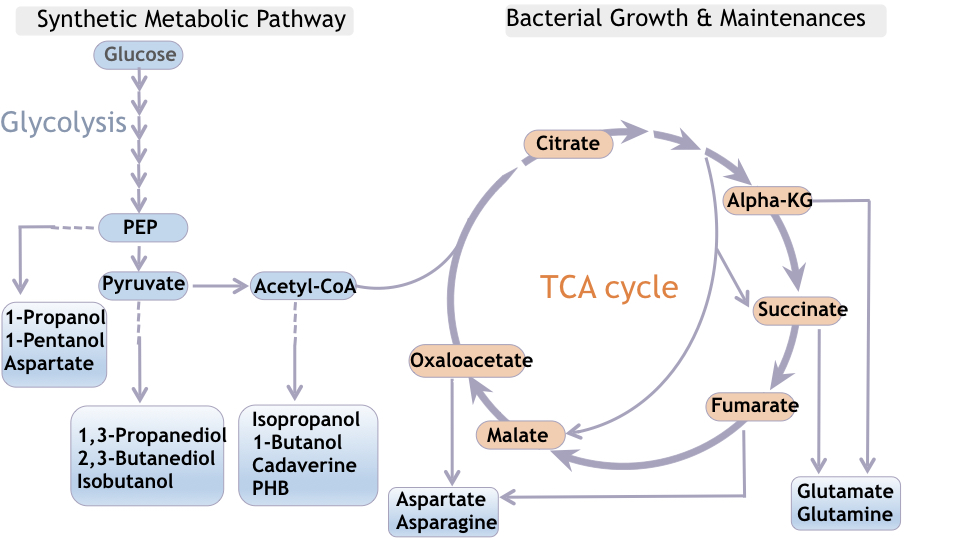 However, some of these deleted genes are responsible for the synthesis of intermediates of important metabolic pathways. The deletion of these genes can influence bacterial growth and cell maintenance. Deletion of these genes would increase the titer and yield of the desired product per cell but decrease the growth rate and final cell density, perhaps resulting in cell death. After all, the final cell density is important for the total titer and yield during fermentation.

A common choice is using commercially available induction systems, for instance, based on L-arabinose and isopropyl-b-D- thiogalactoside (IPTG) for the expression of enzymatic pathways. The use of artificial chemical inducers like L-arabinose and IPTG, although effective, less favourable because of the high cost of inducers, toxicity of inducer, and incompatibilities with industrial scale-up[11]. Recently, biological chemical inducer systems have been applied in metabolic engineering, mainly including two types: intermediate metabolite-induced system and quorum sensing (QS) system. In former, the special biosensor (e.g., the activator) detects the corresponding class of intermediate metabolites like NADPH/NADP+[12], and then promotes the expression of genes downstream. Different with the former, what the latter detects are the quorum sensing molecules like N-acyl homoserine lactones (AHL)[13]. However, intermediate metabolite-induced systems have poor generality and selectivity, and QS systems are difficult to regulate.

In recent years, with the development of optogenetics in synthetic biology, precisely, a variety of light sensors provide a powerful piece of kit that can control cellular processes spatially and temporally[14-18]. On the one hand, as the inducer, light is not only cheaper and no-toxic, but also regulates the gene expression rapidly. On the other hand, using light as the inducer can avoid tedious genetic manipulation because conditions such as light duration, light intensity can be optimized from outside. Moreover, light has the other properties such as invertibility, spatial and temporal precision, and it can be the interface between electricity and organisms. Thus, light can be an ideal tool, which properties matches with metabolic pathways regulation[19]. We intend to take advantage of light as exogenous signal controlling the metabolic flux to balance the growth and production phase.


With rapid development of industry, petrochemical plastics have spread worldwide due to their low cost, with ease of manufacture, versatility, and imperviousness to water[20]. Plastic bags, plastic bottles, Plastic greenhouses, etc. have become part of our daily life. And so much convenience plastic products bring to our life, which we can’t imagine the life without them.

However, it seems that every coin has two sides. Petrochemical plastics are so hard to be degraded that they can neither be diluted by pouring into the ocean nor be completely degraded in years by being buried underground. And as more and more plastic products are produced, the total amount of plastic waste increases in a terrible rate within years. It seems that the only way to solve the plastic pollution nowadays, is burning them, which however, will release toxic chemicals and do harm to ourselves, probably causing nausea, headaches, damages in the nervous system, etc[21]. Hence, it’s our emergency to develop another convenient and low-cost material to replace the traditional plastics.

Polyhydroxybutyrate (PHB) is one of the promising bio-materials as a replacement, which can be naturally synthesized by a wide range of microorganisms as an intracellular carbon source. In addition, products made of PHB possess the outstanding physical properties similar to traditional plastics. It is accessible and more importantly bio-degradable. Even through it is thrown into the environment by mistake, it can still be degraded within years causing no pollution. Besides, PHB is also a renewable resource as it can be produced by microorganisms sustainably. Thus, for its broad market prospects, we would like to use PHB production as an example of our growth-production switching system, hoping that we can improve the production rate of PHB to reduce the cost.