Attempt to build the split RNAP

We initially chose a blue-light-controlled sensor as candidate. The sensor, opto T7 RNA polymerase is a pair of fusion proteins which initiates transcription of PT7 by dimerize when exposed to light 450 nm. nMag is fused with the CT (carbon terminal)[1] of T7RNAP and pMag is fused with NT (nitrogen terminal). Due to the toxicity of the part, the expression of both the two fusion proteins are induced by L-arabinose[2]. And we set a concentration gradient to explore the optimized condition.

We inserted the sfGFP after the PT7 to characterize the behavior of the blue light sensor. The experimental result shows no significant induction compared with the dark control. 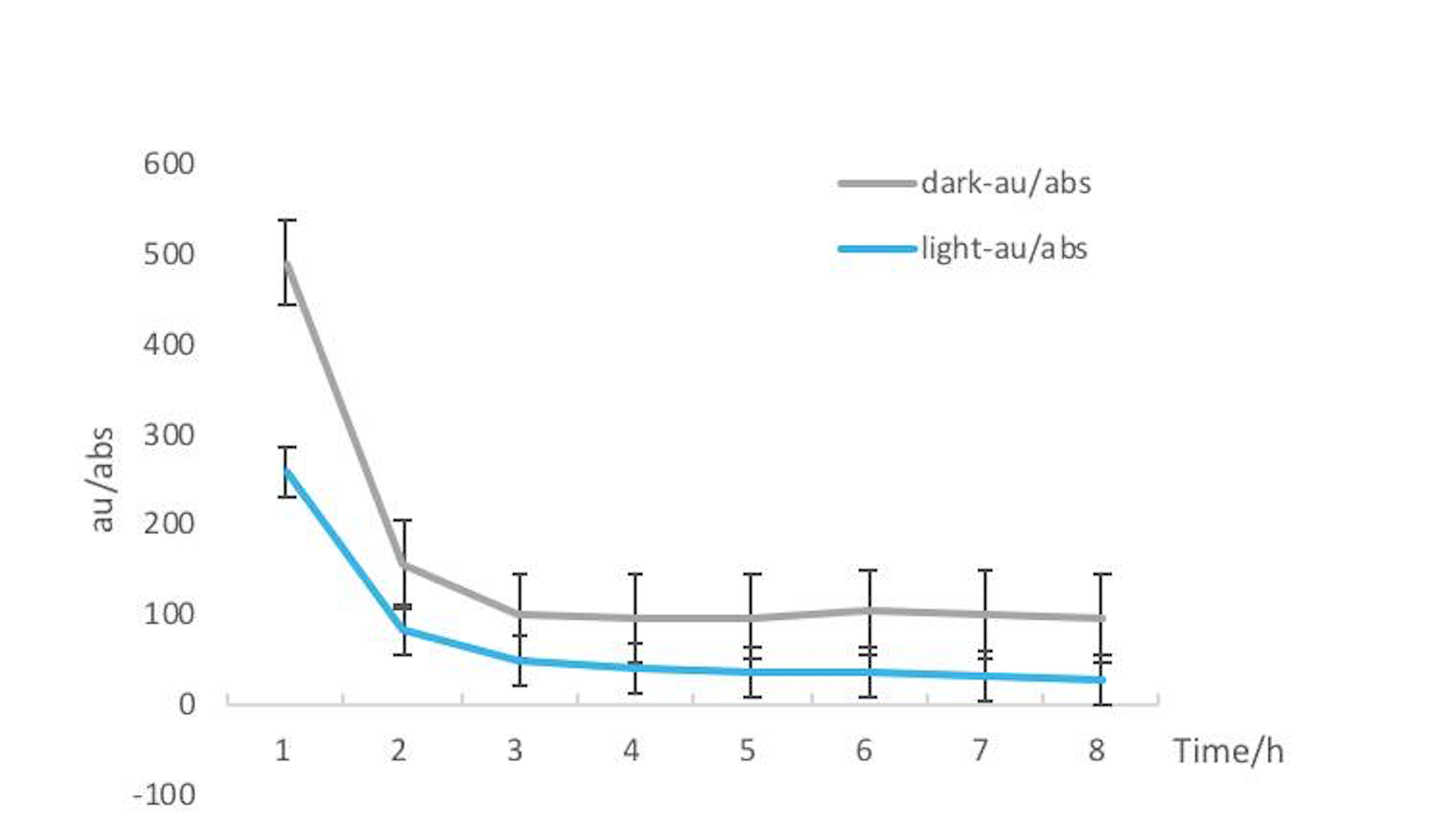 Figure 1. Dynamic experiment of the expression level of Opto-T7RNAP. The sensor is exposed to blue light and dark respectively at 0h. Result showed no significant expression of sfGFP.

To verify the expression of the sensors, whose MWs are 53.9kD and 78.5kD respectively. We tested the sample containing sensor induced by 0, 0.1%, 0.2%, 0.5% arabinose and empty vector. The SDS-PAGE result shows no significant existence of the sensors. 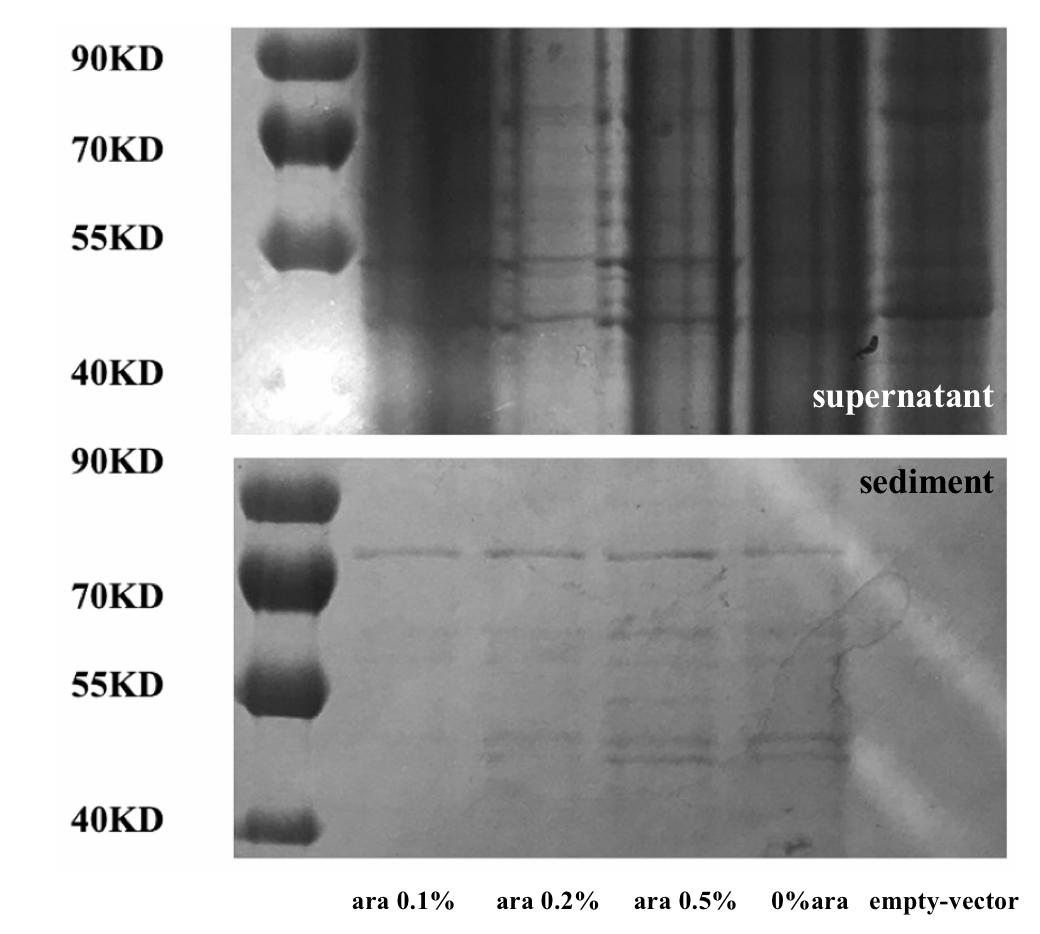 The CcaS protein acts as a light sensing part in CcaS/CcaR two-component system (TCS). CcaS consists of an N-terminal transmembrane helix; a GAF domain, which serves as the sensor domain; a linker region (L1); two PAS domains; a second linker region (L2); and a C-terminal histidine kinase (HK) domain. We were inspired by Professor Koji’s work[3] to remove the L1 linker region and the two PAS domains, then fuse the GAF and HK domains with a truncated linker region.

Our advanced system was characterized over wild type in M9 medium containing 2% glucose but without yeast extract. The fluorescence intensity was acquired 9 hours after inoculated into 24-well plate with Abs600 about 0.1. Our culture was exposed to different light to characterize different transcription level. The basic OD and fluorescence were wiped off. (n=3) 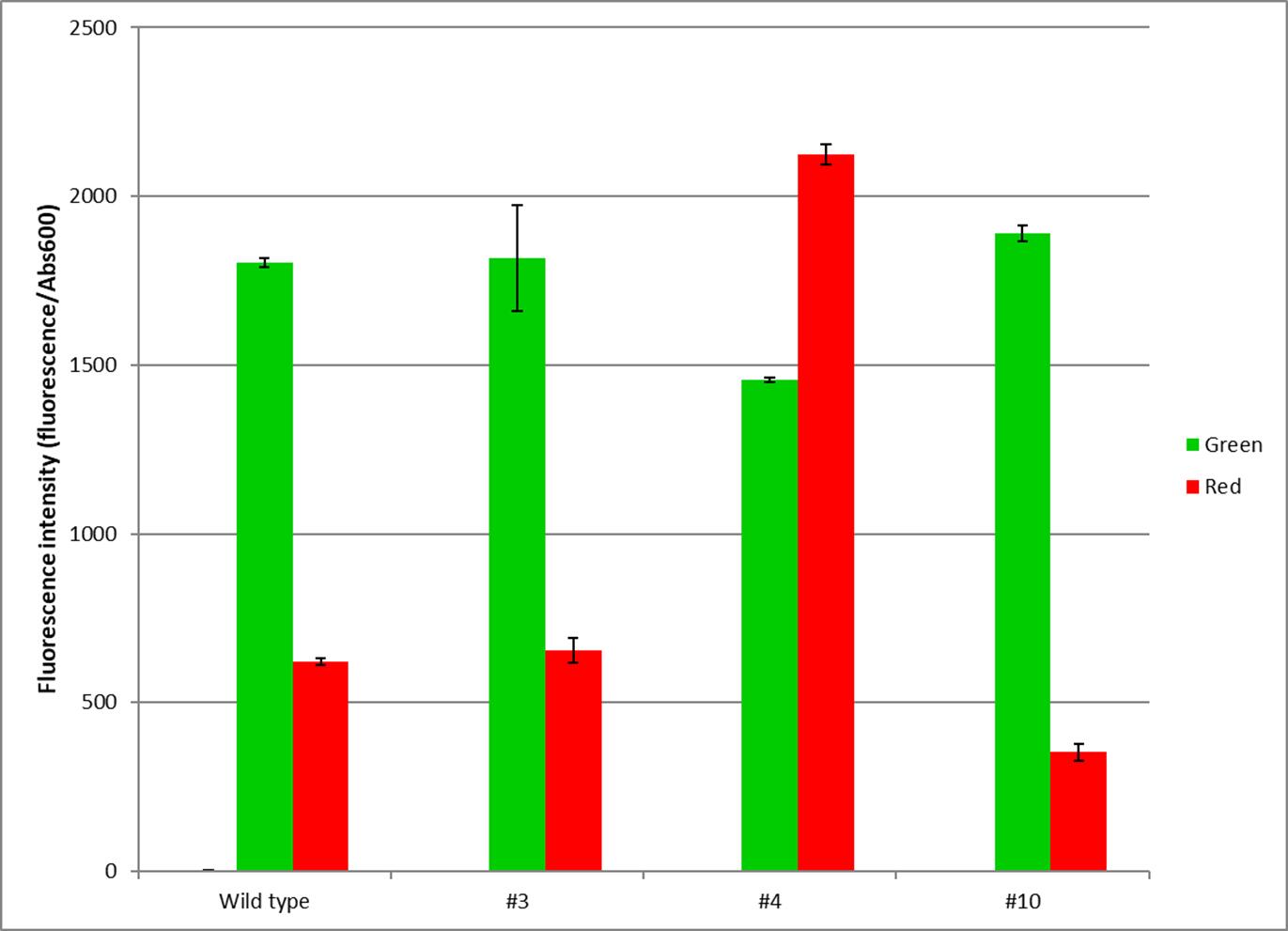 The construction of the metabolic flux regulation platform.

To remove the DNA degradation function and maintain the DNA binding function of the modified type I-E CRISPR system, a special E.coli TOP10 with Cas3 protein knocked out and promoter of Cascade substituted by promoter J23119 was constructed and named EE-E15. To verify the system in EE-E15, the GFP gene was chosen as a reporter to test the function of crRNA targeting different sites of GFP[4]. The results showed that there were wide rages of repression among different sites and the spacer posited on the promotor region presented high repression level (82%).

TCA cycle is one of the most significant metabolic pathways for energy supplement. The cycle starts with the process that citrate synthase catalyzes acetyl-coA and oxaloacetate to form citric, which is the rate-limiting step in the TCA cycle and irreversible, thus the regulation of expression of gltA which codes the citrate synthase may have great effect in central metabolism, and through model we also found that control of gltA can regulate the metabolic flux. We got the target site of gltA gene from previous work and then constructed a medium-copy plasmid (Paracr15A) and a high-copy plasmid (Paracr58.6) containing crRNA targeting gltA to inhibit expression. With 0.2% L-arabinose induction, the samples showed an obvious repression on growth compared with those without L-arabinose, regardless of the copy number difference between Paracr15A and Paracr58.6(Figure 8). Among them, aracr58.6 grew slower, which may due to its high leakage with high-copy plasmids. It indicated that this Type-I-E CRISPRi system can affect cell growth through producing crRNA targeting gltA. 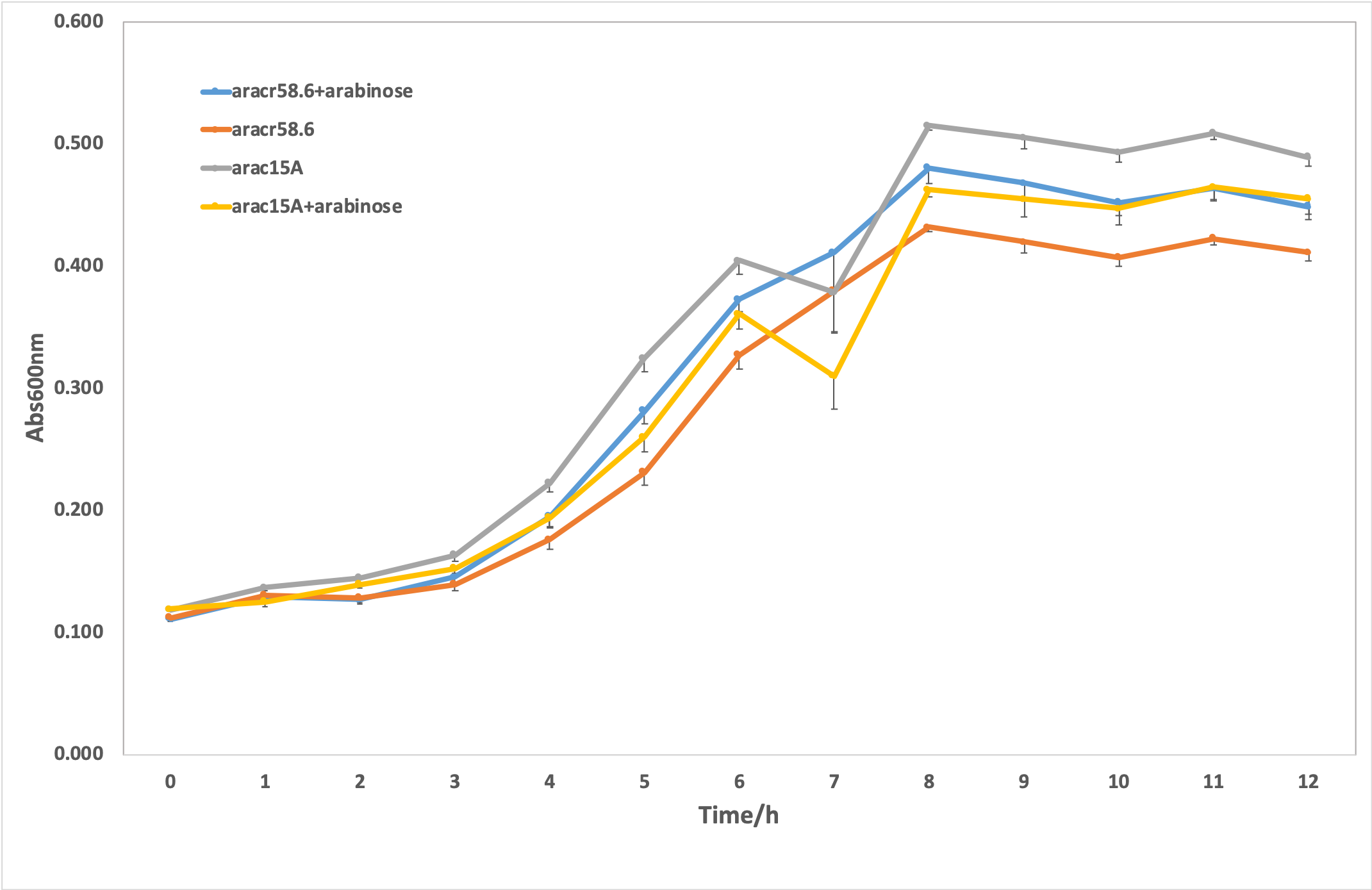 Figure 8. Regulation effect of crRNA induced by L-arabinose between medium-copy and high-copy plasmids. The strains were cultured in 24-well plate in 1 ml M9 medium containing 1% glycerol.

Further, we utilized CcaS/CcaR sensor with type I-E CRISPRi system to induction of crRNA targeting the site of gltA through switching light. To optimize this system, we chose different culture medium verifying the function of light-induced crRNA. 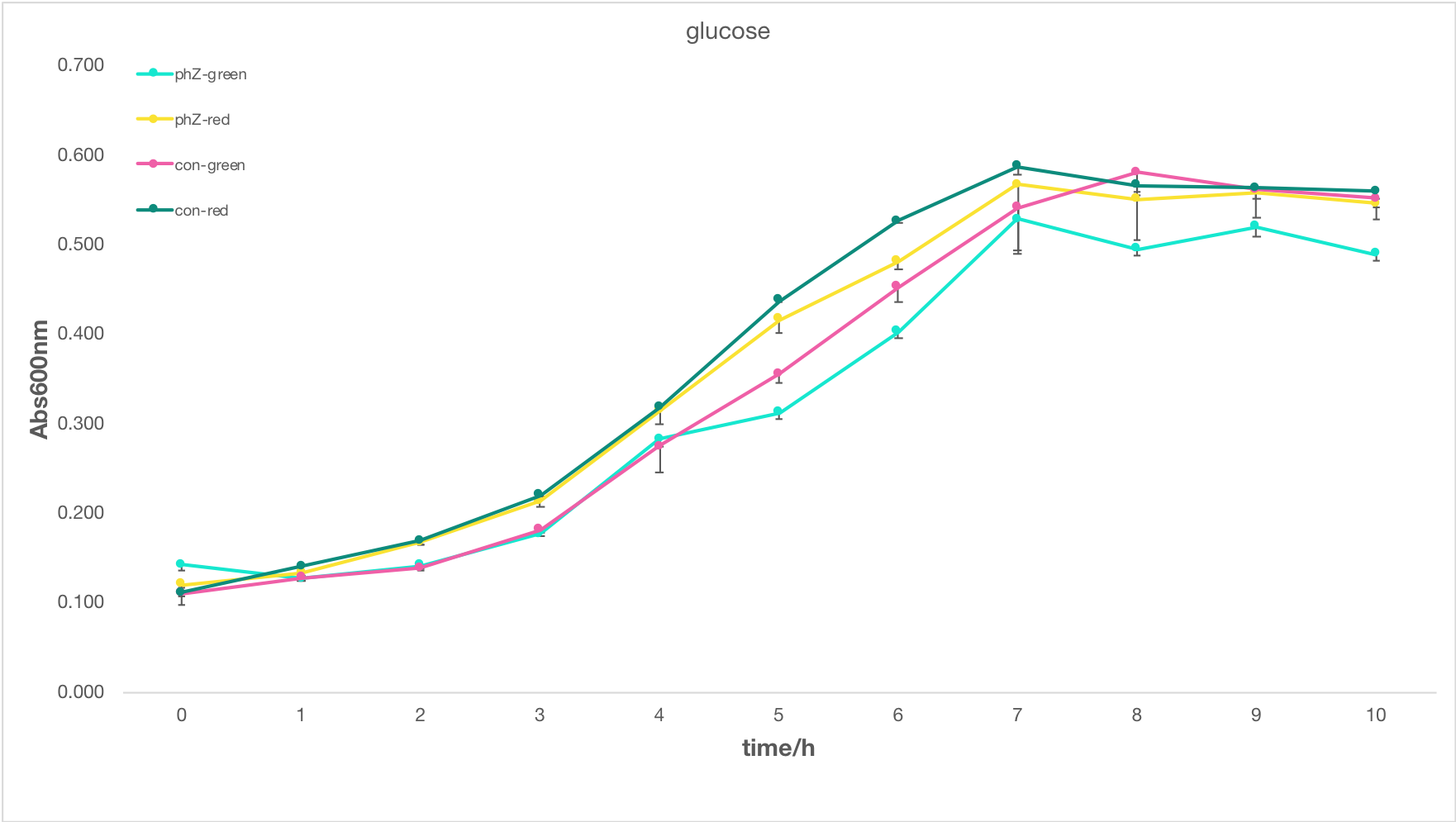 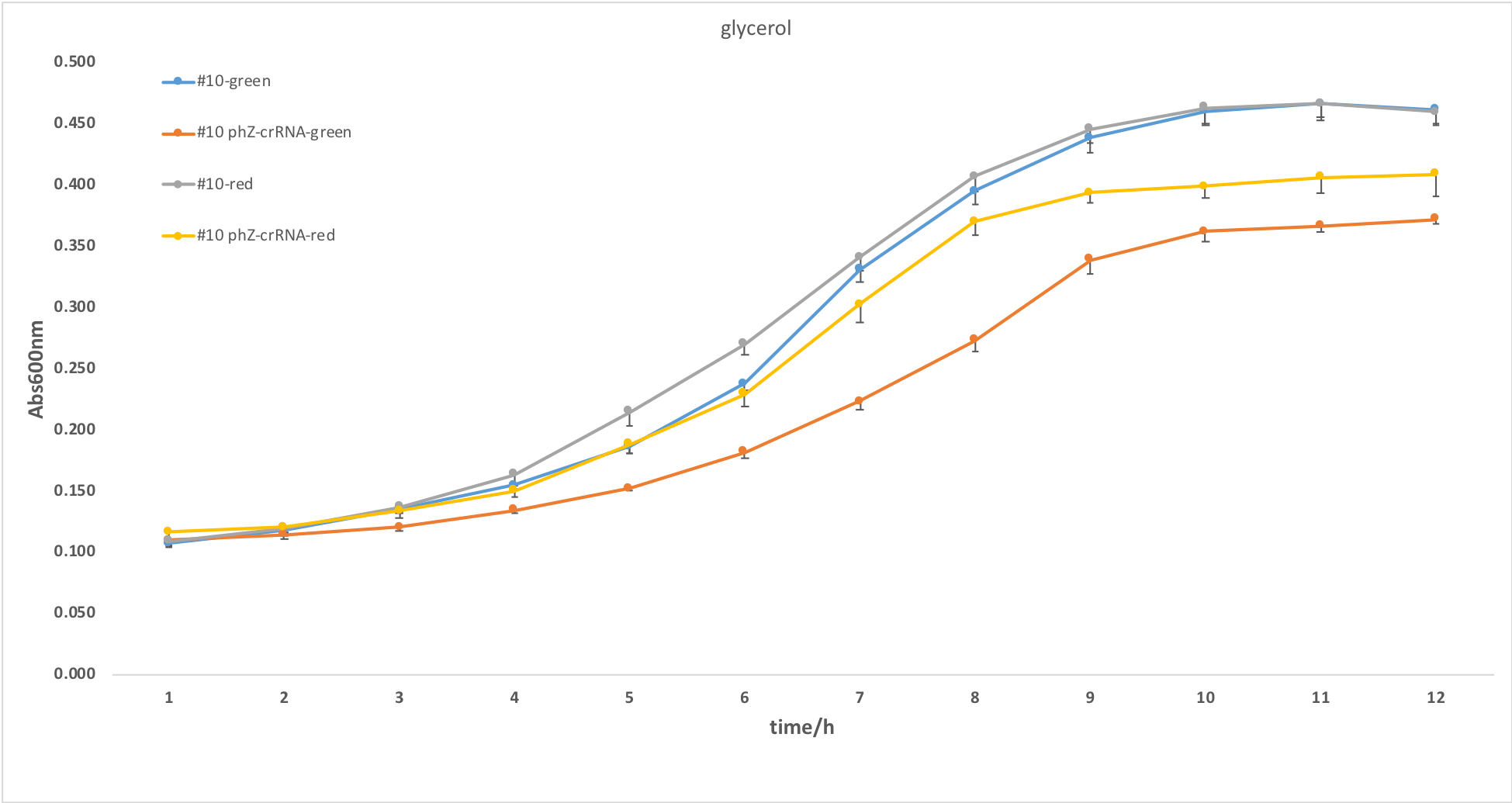 Figure 9. Comparison of the regulation effects between different carbon sources. Strains were cultured in 1ml M9 medium containing 1% glucose in a) while cultured in M9 medium with 1% glycerol in b) in 24-well plates.

In the figures we can find that cell cultured with glycerol growth had a higher level of repression compared with glucose. It indicates that crRNA targeting gltA to inhibit TCA cycle from the first step showed a better effect when nutrition was not directly utilized. In addition, it illustrates that condition made sense for the function of our system. Meanwhile the phenomenon was analyzed through flux balance analysis (FBA) mathematical model. With the data we found there was a threshold when inhibiting gltA, exceeding which appears an obvious transform in metabolic flux. We analyzed that glycerol as carbon source can reduce this threshold showing great repression which was in accordance with the growth results described above. Then we chose M9 medium with 1% glycerol as the condition for the characterization of crRNA targeting gltA.

To optimize the expression of crRNAs in EE-E15, then we constructed a medium-copy plasmid (pSR43.6) and high-copy plasmid (phz) to express crRNA targeting endogenous gltA. The two strains showed significant variance in growth in figure 4, suggesting crRNA on high-copy plasmid showed stronger repression than on medium-copy one. We supposed that the inhibition function was related to the quantity of crRNA and light-sensing promotor PcpG2-172 works well in high-copy number, leading to this result. It indicated that copy-number for light-induced crRNA had a great impact on this photoactivated regulation system. 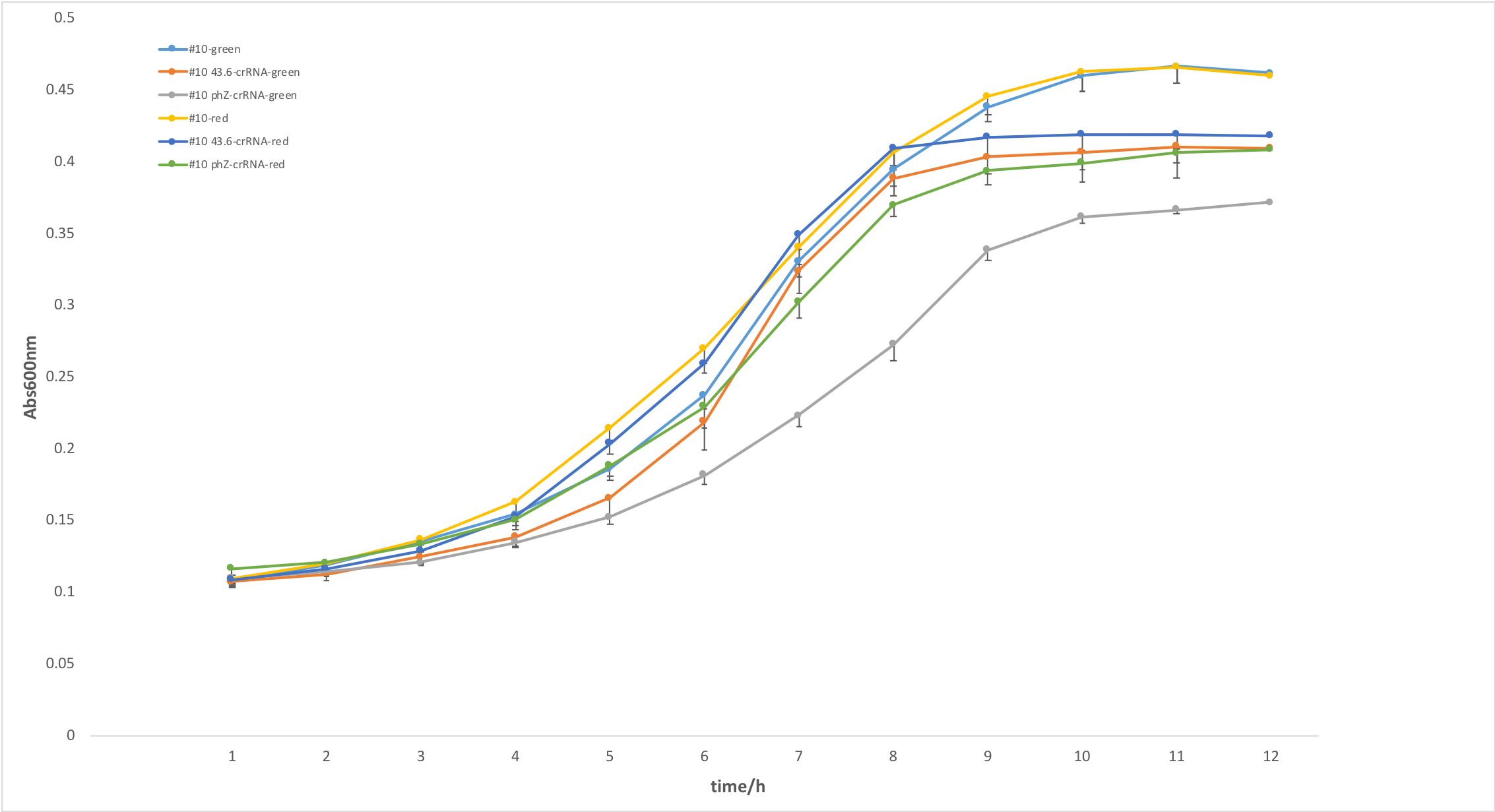 Figure 10. Comparison of the regulatory effect between medium-copy and high-copy plasmids. #10 43.6 is a medium-copy plasmid (p15A ori) expressing crRNA while high-copy for #10 phz (CoIE1). The strains were cultured in 24-well plate in 1ml M9 medium containing 1% glycerol.

After the verification of the culture condition, we investigated the dynamic regulation effects of targeting gltA with light-controlled system through switching red light to green light at 2h, 5h and 9h. As shown in figure 5, all strains induced at different time grow better compared with illuminating at 0h. Bacteria growth was inhibited the most when being induced at 5h, showing an obvious palliation after sensing green light. The strains induced at the early-log phase (2h) grew slower than the control (upon red illumination), whereas it continuously grew and maintained a relatively high K value. It was supposed that cells growing at a moderate speed at early consumed less nutrition, thus drove the biomass constantly increase and had a higher level of K value. In accordance with the hypothesis, we concluded the negative control without crRNA targeting gltA which presented a lowest level of K value consumed too much nutrition so that it can’t satisfy the need of cell in late period of growth. In addition, inducing crRNA expression at 9h through green light, we found there were little growth variance between the strains green light induced at 9h and the control illuminated at red light continuously. It was supposed that at the stationary phase there was nearly no effect for inhibiting TCA cycle to repress the cell’s growth, which might due to its metabolic flow. The difference between the regulation effect of different induction time isn’t obvious through light switching, might due to light sensor CcaS/CcaR system which only have 4.8-fold difference between red/green light induction. 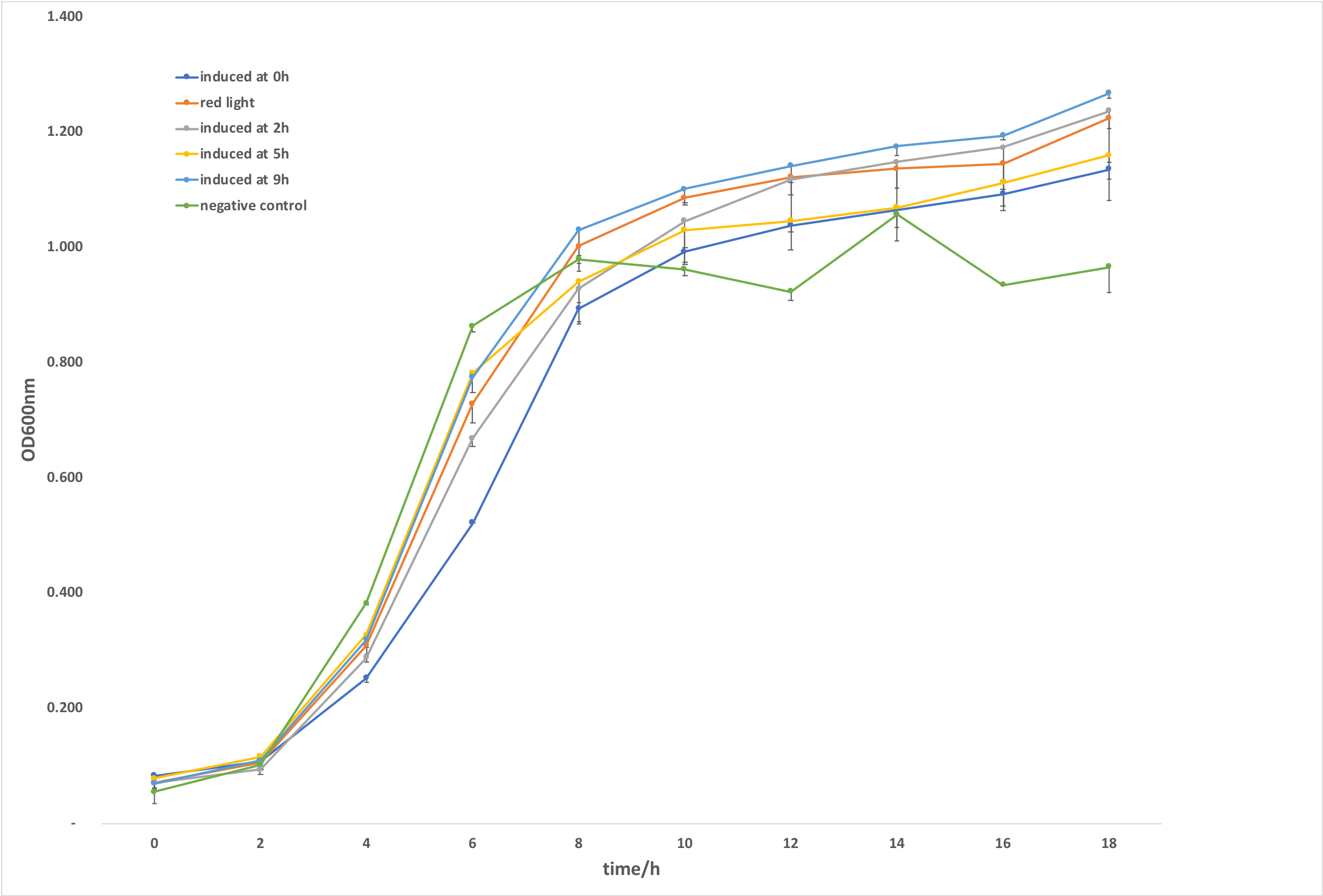 We reconstructed EE-E15 driving its metabolic flux regulation at different time through switching red light to the green one. Then we made polyhydroxybutyrate(PHB) as an example to demonstrate our dynamically regulating metabolic flux platform.

Firstly, in order to verify that phbCAB cluster could be expressed induced by CcaS/CcaR system and synthesize Polyhydroxybutyrate (PHB) successfully, phbCAB cluster (without its original constitutive promoter) was cloned right behind the light sensing promoter, PcpcG2-172 (Figure 12).

Also strain “PHB induced Red/Green” was illuminated with red light and green light respectively throughout the PHB fermentation while light illuminating “PHB induced 5h” was switched from red light to green light at 5h (exponential phase) so that we can tell whether turning on PHB synthesis pathway at different periods could affect PHB content within the cells and cell growth, as well. 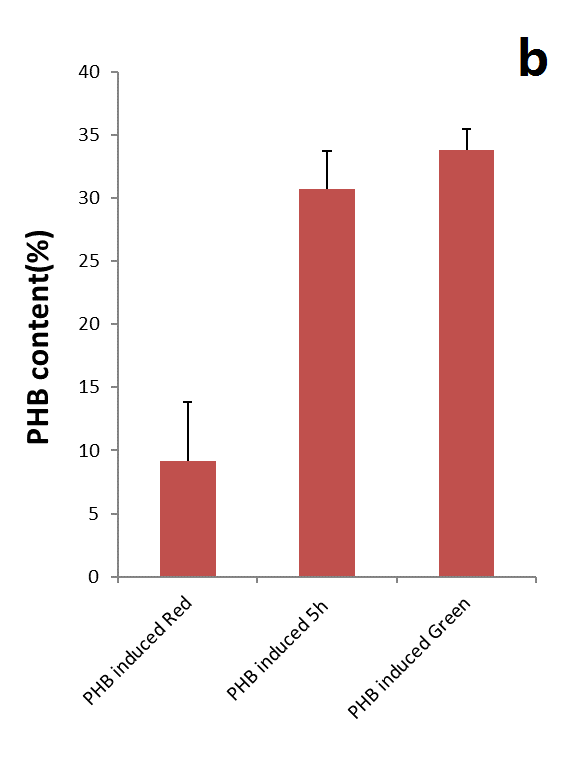 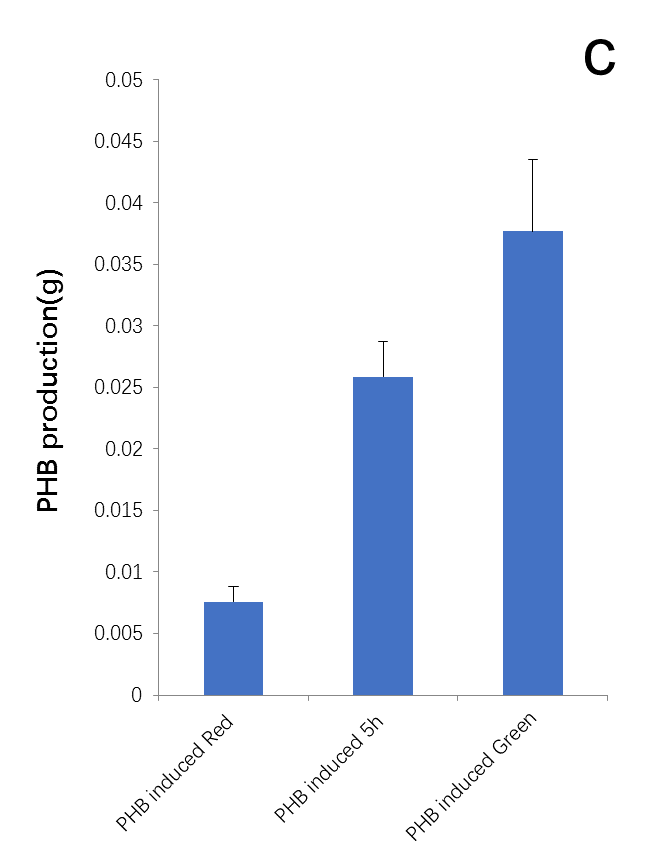 Figure 13.Cell growth curve and PHB production among strain “PHB induced”. In groups "PHB induced 5h/Green", the expression of phbCAB is activated at 0h and 5h respectively. In contrast "PHB induced Red" are illuminated by red light throughout the fermentation to inhibit the crRNA expression. (a) cell growth curve during the PHB fermentation. (b) the ratio between PHB and cell drought weight, showing the average PHB content within each cell. (c) total amount of PHB produced during the fermentation.

According to the PHB fermentation results, CcaS/CcaR system expressed phbCAB cluster successfully (Figure 13.b c). What’s more, a large amount of PHB could be synthesized as PHB took up over 30% of cell drought at the end of fermentation in “PHB induced Green" (Figure 13.b). Furthermore, the amount of PHB inside the cells increased as the amount of time for phbCAB cluster expression increased, which was consistent with our expectation (Figure 13.b). However, to our surprise, it appeared that those groups containing higher PHB content tended to grow better than those with less PHB. After searching articles on the relationship between PHB synthesis and bacteria stress tolerance, we found out that the biosynthesized PHB stored inside the cell can serve as an intracellular energy and carbon storage system and thus, increases the cell survival rate when carbon source is limited.[5] This probably explains the reason why the “PHB induced” that synthesized more PHB tend to have higher cell density for the duration of fermentation.

Since we have demonstrated that a great deal of PHB can be synthesized under the control of CcaS/CcaA system, we then hope to verify that the inhibition of gltA gene by crRNA as well as type I-E CRISPRi system can improve PHB production through metabolic flux redirection. Therefore, we constructed another E. coli strain, “PHB con+crRNA”, which expresses phbCAB constitutively with its original promoter within the operon and expresses crRNA through CcaS/CcaA system (Figure 14). 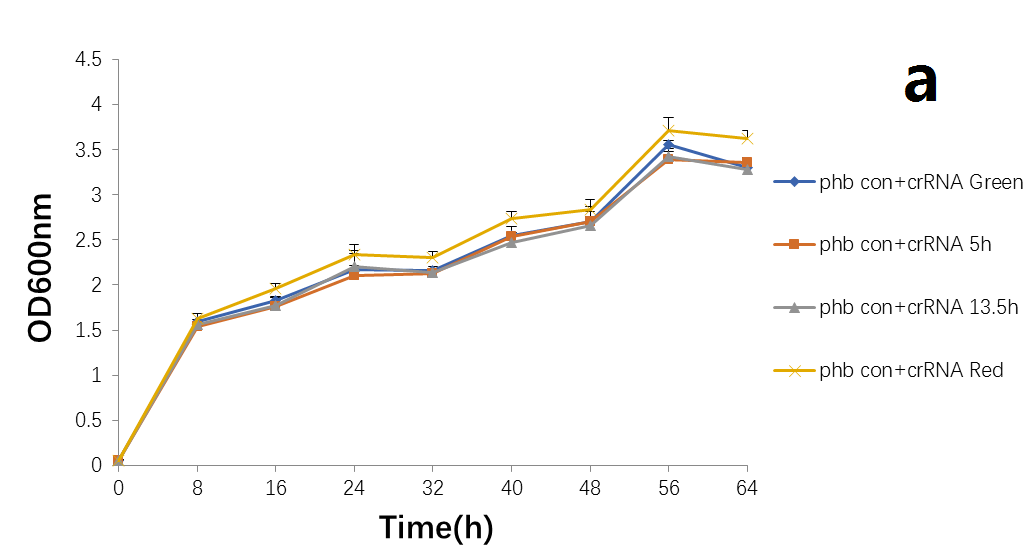 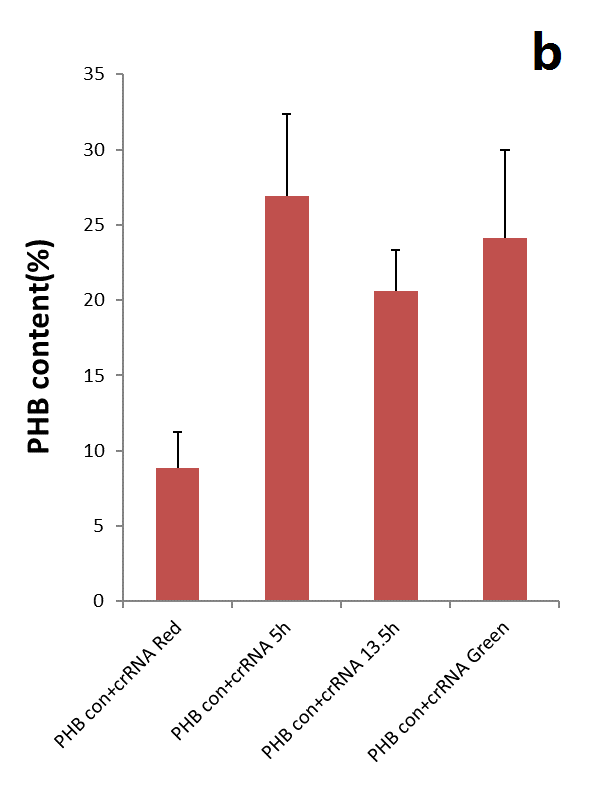 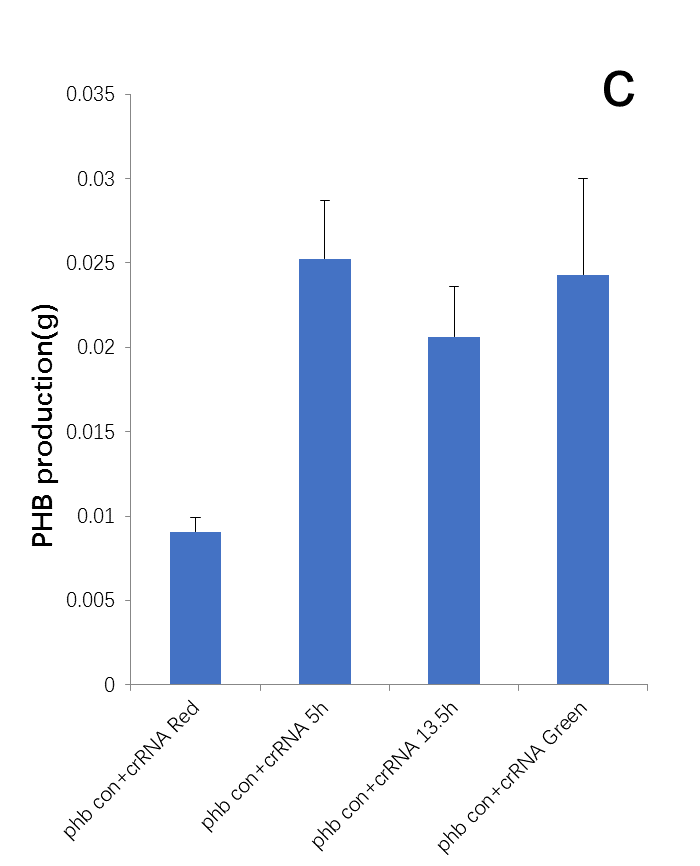 Figure 15. Cell growth curve and PHB production of strain “PHB con+crRNA”. In "PHB con+crRNA Green/5h/13.5h", the expression of crRNA is activated at the beginning (0h), 5h and 13.5h respectively. By contrast, "PHB con+crRNA Red" is incubated under red light all the time to suppress crRNA expression. (a) the cell growth curve during the PHB fermentation. (b) the ratio between PHB and cell drought weight. (c) total amount of PHB produced during the fermentation.

As we can see, despite “PHB con+crRNA Red” grew slightly better than the other, there was no significant difference between “PHB con+crRNA Green/5h/13.5h” (Figure 15. a), which meant that unlike the results shown on crRNA characterization, here, crRNA doesn’t inhibit cell grow. Based on the former PHB fermentation result, this was probably because the PHB synthesized by E. coli also has a positive effect on cell growth which offsets the detrimental impact of crRNA. And since crRNA was just expressed at a leaky level, “PHB con+crRNA Red” seems to grow slightly better than the other groups.

In short, expressing crRNA can improve PHB synthesis at exponential phase would be the best choice of crRNA expression.

After demonstrating the expression of phbCAB cluster and the effect of crRNA, we intend to combine light control PHB synthesis and gltA inhibition together for further demonstration of the possibility of our growth-production switching system in the future. Besides, we will also make use of the powerful technique, HPLC, to show the exact changes in metabolic flux after gltA is repressed by crRNA.