This year we made an improvement on part BBa_K592001 , which codes for green/red light sensing protein CcaS. CcaS functions in CcaS-CcaR two-component system responding to the existence of green or red light. CcaS consists of the following domains and regions: a N-terminal transmembrane helix, a sensor domain consisting of a cyanobacteriochrome-type cyclic guanosine monophosphate phosphodiesterase/adenylyl cyclase/formate hydrogen lyase transcriptional activator (GAF) domain, a linker region, two period/aryl hydrocarbon receptor nuclear translocator/single-minded (PAS) domains of unknown function, a second linker region, and a C-terminal HK domain (Fig. 1) [1]. Previously, the functions of some of the domains were studied, for example, a shape change can be observed in the GFA domain after CcaS was exposed to light, which could thus induce an autophosphorylation of the HK domain, then the phosphate group would be transferred to the regulator protein CcaR[2]. However, the function of PSA domains is remained unknown.

Figure 1. A brief illustration of the structure of CcaS. TF domain is located in the N-terminal while HK domain shows where the C-terminal is.


We were inspired by Professor Koji’s work[1] in which he removed the two PSA domains to see what would happen. In his work, he created 11 variants of CcaS by deleting different numbers of base pairs, and these variants were characterized through measuring fluorescence/OD. We repeated his work and acquired this new part. This improved part is #4 in the variants collection. We found that this new part has a totally opposite response to green and red light compared with the original CcaS. As we can see from the figure below, #4 has a high fluorescence/Abs600 under red light but has a low one under green light. 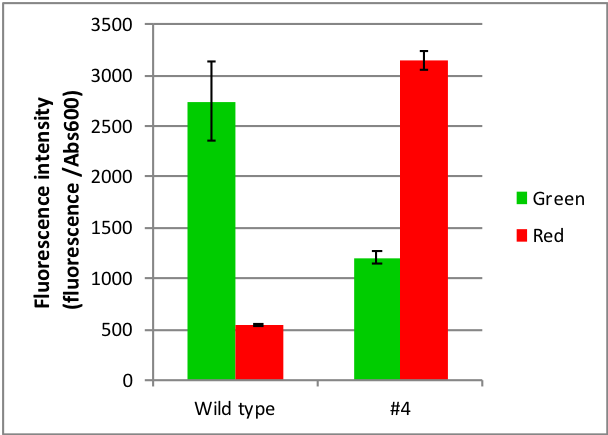 Figure 2. Characterization of part BBa_K2627000 and BBa_K592001. Part BBa_K2627000 shows a different effect after induced by green light and red light. Then fluorescence intensity of CcaS#4 was measured at 9h.