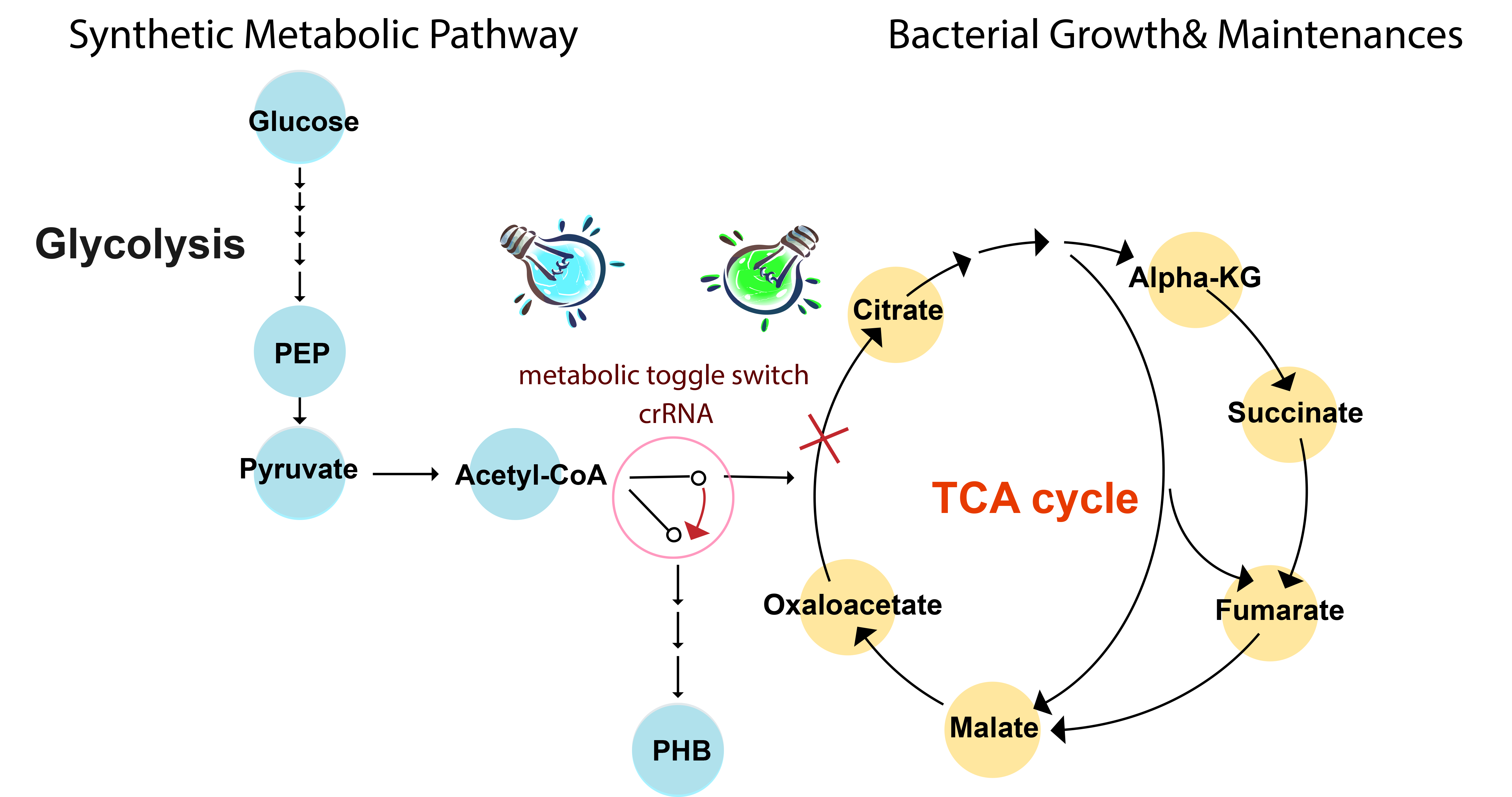 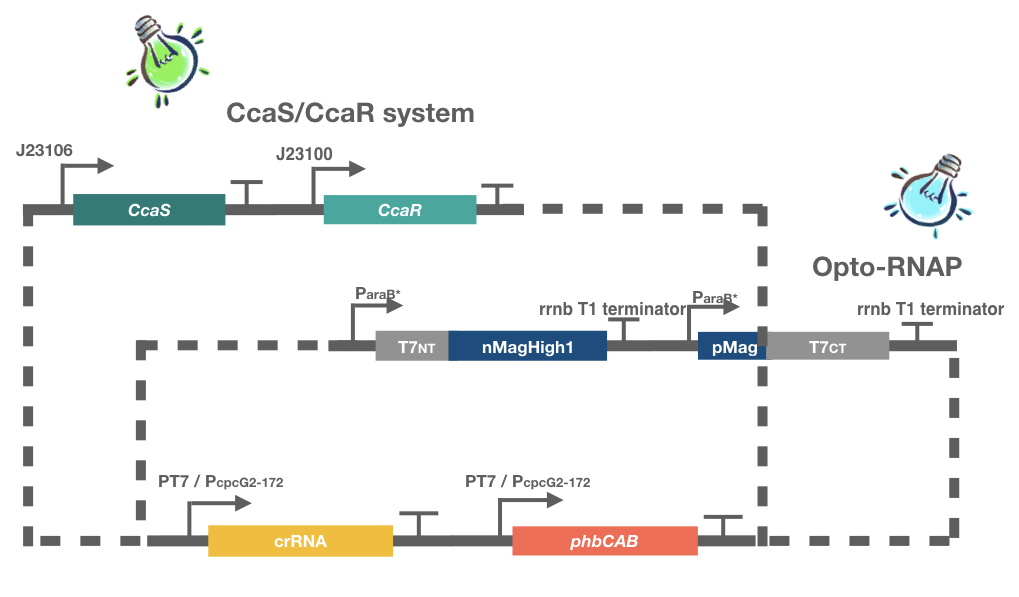 The domains Magnet, derived from the homodimerizing photoreceptor VVD from the filamentous fungus Neurospora crassa, consist of pMag and nMag, which binds each other under blue light (460 nm)[1]. The T7 RNA polymerase from the T7 bacteriophage with high orthogonality is commonly used for overexpression heterologous protein. In our design, split T7 RNA polymerases are fused to this photoactivated dimerization fragments, and through light-induced protein-protein interactions the split T7 RNA polymerases dimerize and reconstitute its structure, then preforming its normal function. This light-inducible transcription system, with high spatiotemporal accuracy, also has low leakiness of gene expression in darkness and high expression strength when induced upon illumination. And with high spatiotemporal accuracy, this system can allow for precise dynamic control of gene expression[2,3]. We desire to use this orthogonal blue light-responsive T7 RNA polymerase in our project for precise dynamic control of gene expression.

Another optogenetics system applied in our project design is a green/red photoreversible two-component signal transduction system (TCS) with transcriptional outputs in E. coli. The two-component system consists of the membrane-associated histidine kinase CcaS and its response regulator CcaR[4]. The activating information stored in light is captured by phytochromes in situ. In phytochromes, a bilin-chromophore (in this case phycocyanobilin) binds at a conserved cysteine within an N-terminal GAF (cyclic GMP phosphodiesterase, adenylyl cyclase, FhlA) domain and imparts reversible photoactivation of signaling activity with maximal responses to 535 nm (green) and 672 nm (red) light. Absorption of green light increases the rate of CcaS autophosphorylation, phosphorylation of CcaR by phosphate transferring, and transcription from the promoter of the phycobilisome linker protein cpcG2, while absorption of red light reverses this process. The lower leakiness is reported to be acquired after removing the second putative promoter in cpcG2, which is thought to be constitutive and contributes to leakiness and low dynamic range.

What’s more, recent studies have showed that the leakiness is got lower while the dynamic range rises sharply by removing two PAS domains of unknown function within the CcaS sensor histidine kinase[5]. Inspired by their work, we improved the existing part and acquired #3、#4、#10 which were the variants of CcaS.

Clustered regularly interspaced short palindromic repeats (CRISPR) is a family of DNA sequences found within the genomes of prokaryotic organisms such as bacteria and archaea, which have the function in binding and cutting DNA[6]. There are three types of CRISPR system found in microorganisms to date: type I, type II and type III. In type I and type III systems the long precursor CRISPR RNA (pre-crRNA) is processed by CRISPR specific endoribonucleases into small CRISPR RNAs (crRNAs) that contain a repeat sequence flaked by portions of the adjacent CRISPR repeat sequence[7-12]. In contrast, the pre-crRNA in type II systems is processed by RNase III[13].

Similar to the other two CRISPR systems, crRNA in the type I-E system sequences are recognized by ribonucleoprotein complex Cascade during target DNA binding[14,15]. The ribonucleoprotein complex Cascade is composed of a 61 nt crRNA, and five different Cas proteins in an uneven stoichiometry: Cse11Cse22Cas76Cas51Cas6e1, encoded by 8 genes separately (cas3, cse1, cse2, cas7, cas5, cas6e, cas1, cas2)[16]. The interference function of this system requires Cas3, a large protein with nuclease and helicase activities[17,18]. Therefore, by knocking out cas3 and activating the expression of CRISPR-associated complex for antiviral defence (Cascade), the CRISPR system is inactivated for its DNA-cutting function, with its DNA-binding function maintained, which can interference the expression of the target genes[19]. 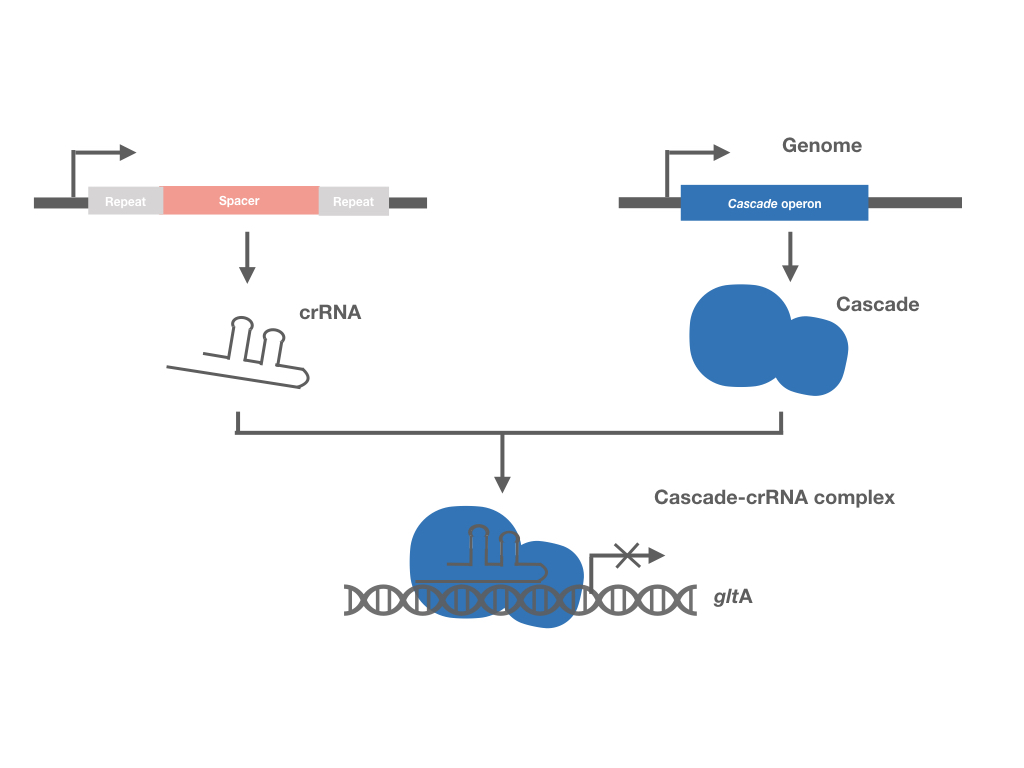 In Escherichia coli, the type I-E CRISPRi system expressed endogenously shall be easy for internal regulation without causing metabolic burden in compared with the widely used type II system, which expressed dCas9 as an additional plasmid.

Thus we can use this CRISPRi system as a switch to regulate the gene of interest in Escherichia coli. In our project, the target gene is gltA which encodes citrate synthase. The process catalysed by citrate synthase is irreversible and rate-limiting step in the TCA cycle. Furthermore, its substrate - acetyl-CoA is one of the most significant intermediates used to produce important chemicals such as 1,3-isopropanol[20], 1-butanol[21]. In principle, the type I-E CRISPRi system can redirect the metabolic flux from TCA cycle to target pathway via switching gltA off[22].

As we all know acetyl-CoA is a prominent precursor for the TCA cycle, which is regarded as the most efficient pathway of energy production for cell growth. However, acetyl-CoA is also required in many synthetic pathways, like biofuel 1-butanol[23], solvent acetone[24] and bioplastic Polyhydroxybutyrate (PHB). PHB, a kind of biosynthesized polyester, is nowadays, one of the most promising bio-materials as the replacement of traditional petrochemical plastics for its outstanding biodegradable as well as other physical properties. So here, we intend to introduce our CcaS/CcaR system and type I CRISPR into PHB fermentation to produce PHB more efficiently as an example of our growth-producing switching system. 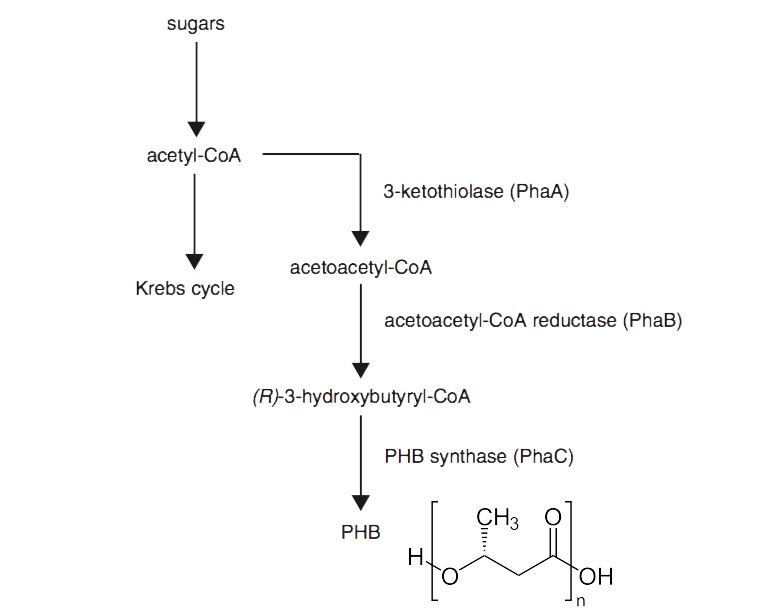 Naturally, the synthesis of PHB requires three enzymes, phbA, phbB and phbC, by which acetyl-CoA can ultimately be converted into PHB. But the conflict between cell growing demands and the usage of acetyl-CoA for PHB fermentation is obviously the obstacle for PHB production. So we hope that PHB production can be improved with our growth-producing switching system and accelerate the process of taking PHB plastics into practice.