Our exploration into the commercial potential of our Assemblase scaffold helped to steer the direction of our overall project. We started by consulting with a number of industry experts to understand how they could forsee our scaffold fitting into industry and research practices, resulting in several metabolic pathways suitable for use in our system being suggested as commercialisation case studies. Examples included the Taxol, Levofloxacin and Astaxanthin synthesis pathways.

By integrating advice from industry experts, we were able to thoughtfully and creatively redesign our project to include a focus on scaffolding the enzymes involved in Taxol side-chain synthesis, a choice informed by our understanding of its commercial context. We designed the relevant DNA sequences for the tagged enzyme fusion proteins that could be involved in this reaction. We also used our mathematical enzyme kinetics and diffusion model to test the potential increase in product titre that could be obtained by scaffolding the enzymes with the Assemblase system.

The Foundational Advance track exists to allow teams the opportunity to come up with novel solutions to observed needs within the industrial and scientific research communities. In order for our solution to add value on a larger scale, the team realised that we would have to demonstrate how our Assemblase system could impact a metabolic pathway of commercial use and value. Therefore, we focused on consulting with industry experts to gain an understanding of the target market for our scaffold, enabling us to adjust our design to best meet their needs, whilst compiling a short list of possible, highly commercial applications of our system.

In the initial design phase of our project, the indole-3-acetic acid (IAA) biosynthesis pathway was selected as model for showing how our scaffold could increase product titre. IAA is a plant growth hormone and has been used by previous iGEM teams that have worked on enzyme scaffolding projects, such as ZJU-China 2012 and NUDT-China 2015. This is due to the fact that the pathway is made up of a simple, two-step reaction leading to the easily quantifiable product, IAA. To expand on this previous work, we decided to do our own research on the use of IAA in practice.

We contacted Amanda Rollason, a researcher at the Australian Botanic Gardens PlantBank facillity, who uses tissue culture methods for rainforest species conservation. Rollason informed us that their facility exclusively uses indole-3-butyric acid (IBA), another auxin, as they had found in previous experiments that IAA showed little to no benefit and that IBA was easier to work with, being more stable. Amanda coordinated our visit to the PlankBank facilities to learn more about their tissue culturing methods with Lotte von Richter, a science facilities coordinator.

During the tour of PlantBank, Lotte showed us all the equipment and explained the methods that they employ to do tissue culture. We also received some advice as to how we should conduct our own plant experiments . 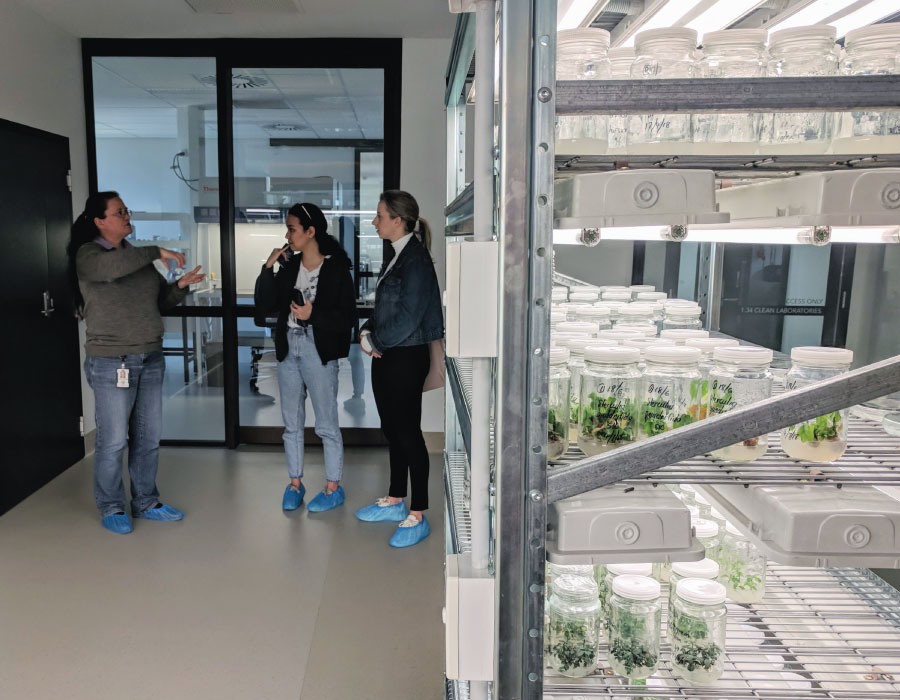 After our visit to PlantBank, we decided that IAA synthesis was not a pathway which would be worth commercialising. However, we still wished to validate our scaffold design by demonstrating IAA biosynthesis with our Assemblase system and showing its effects effects on plant growth and development . Validation using IAA was also still valuable because the large size of the enzymes would allow us to make a preliminary inference that smaller enzymes would work well also. Applying Lotte’s advice on tissue culturing with aseptic techniques, we were able to more effectively conduct our future plant trials, but we also turned our attention to more commercially viable pathways as alternatives to IAA, which we could run in parallel (although this did not happen due to time constraints).

Next we approached the University of Sydney's Professor Paul Groundwater to discuss the potential applications of our scaffold in drug synthesis. His research into the synthesis of novel agents made him an excellent candidate to ask for suggestions on which aspects of the pharmaceutical synthesis industry our system could benefit, and which ones we should particularly target.

Professor Groundwater highlighted the significance of stereogenic centres as a key candidate for metabolic engineering tools, something we had not previously considered. Many drugs available to consumers have an inflated price due to the industrial synthesis of these compounds requiring ineffective and costly separation of the required enantiomers from those with undesirable or potentially toxic chiral structures. Synthesising these drugs through a biocatalytic pathway would remove the need for resolution of the desired compound, potentially reducing the cost of synthesis. We continued to thoughtfully consider this suggestion throughout the rest of our project.

In particular, he mentioned the synthesis of paclitaxel (brand name Taxol), a semi-synthetic anti-cancer therapeutic which is very costly to produce. He prompted us to look further into this pathway, which was significant in catalysing a turning point in the design of our project; away from the indole-3-acetic acid pathway towards paclitaxel side-chain synthesis.

He also suggested that we look into the synthesis of the antimicrobial agent, Levofloxacin, which is also costly to produce, and therefore costly to purchase. Levofloxacin contains one stereocentre, and by reducing the number of different enantiomers produced, our complex could also benefit its production as it may do paclitaxel production - by greatly reducing its cost of production. Through discussing pharmaceuticals that are hard to synthesise, the team was able to further brainstorm other pathways where stereogenic centre conformation is important, such as the metabolic synthesis of Astaxanthin, a pink pigment which is extensively used in the fisheries industry.

School of Chemistry – University of Sydney

We approached Prof. Groundwater to discuss the potential future applications of our scaffold in regard to drug synthesis and possible drug delivery. He highlighted the significance of stereogenic centres as a candidate for enzymatic synthesis.

Taxol, the brand name of paclitaxel, is an anticancer drug which is often used in chemotherapy for the treatment of ovarian and breast cancers1. Taxol was traditionally isolated from the Pacific yew tree (Taxus brevifolia) and research into cost-effectively producing Taxol has been ongoing since its isolation in 19672. Prof. Groundwater suggested that we look into synthesis of the Taxol side-chain synthesis, due to the production of a racemic mixture at that point in industrial synthesis. To combat the production of a racemic mixture, biosynthetic pathways, such as the one shown for Taxol (Figure 1) can be used to ensure the correct stereoisomers are produced1. However, these biosynthetic pathways are often slow and could benefit from co-localisation. 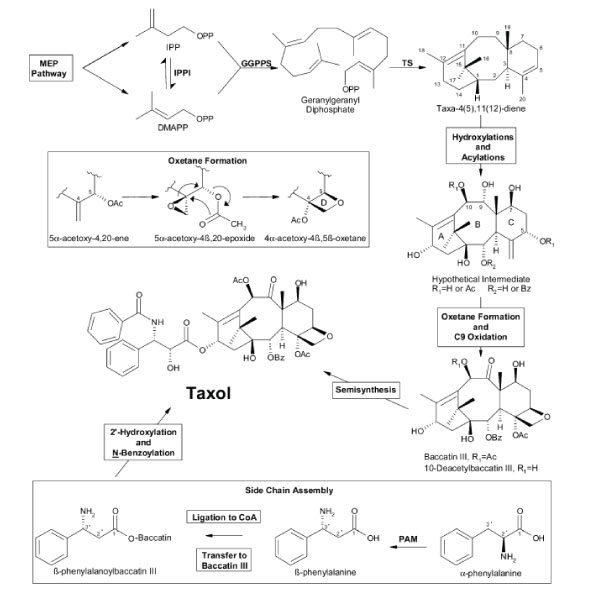 The enzymes required for synthesis of the Taxol side-chain are Phenylalanine aminomutase (PAM) and Tyrocidine synthase I (S563A) (TycA-S563A). These enzymes have a slow turnover rate (Kcat of 0.015 /s and 0.05 /s respectively) which could be improved through co-localisation and altering the stoichiometry of the reaction, both of which can be achieved using our Assemblase scaffold.

We tested this assumption with our Enzyme Kinetics and Diffusion model, which showed that co-localising the enzymes with our scaffold could potentially lead to a six-fold increase in taxol side-chain yield. 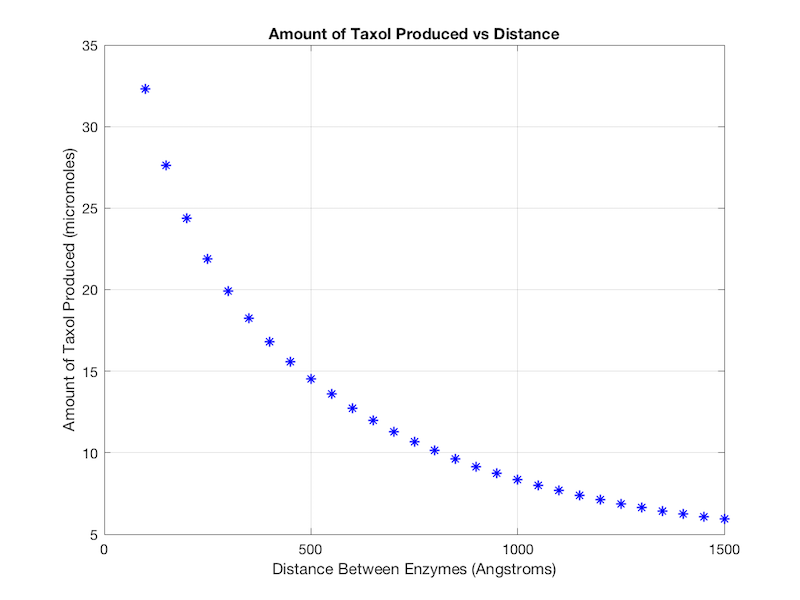 We have designed the gBlock sequences needed to express the Taxol synthesis enzymes in the appropriate form to attach to our scaffold (including a Spy or Snoop tag). Due to time constraints, we have not experimentally validated this section of our project. Moving forward, we hope to characterise this pathway experimentally to also show the flexibility of the Assemblase system adapting to different pathways.

The following links act as a guide to create new gBlock sequences for use with our Assemblase scaffold:

The following method will result in a DNA sequence which can be synthesised, digested, transformed, cloned and expressed to produce Spy/SnoopTagged Enzymes for use with the Assemblase scaffold.

Having investigated the areas in which our Assemblase scaffold could be applied, the team decided to get a broader understanding of the commercialisation path we would have to follow. We did this by meeting with Dr. Brad Walsh, the CEO of Minomic, an immuno-oncology company headquartered in Sydney, Australia. Brad’s significant experience in the Australian biological commercialisation space made him an ideal candidate with whom to discuss the plausibility of our team commercialising our synthetic biology tool in the future.

Brad explained some Minomic’s key products in development, focusing on MiCheck, a prostate cancer diagnosis tool, which works via antibody-mediated analysis of serum samples. Brad informed us that from Minomic attaining the licence for this product, it took 4.5 years and $25M AUD to take it to market, despite the large quantity of research already available verifying both its function and safety. One of Brad’s key messages from this was how important it is to know your target customers before attempting to integrate the product into the market, something we took on board with our product design. He explained how Minomic achieves this by surveying relevant industry professionals, such as insurers and healthcare practitioners, to ascertain where their device would sit within the industrial market when compared to current technologies. Brad advised us to conduct market analysis as we moved forwards in order to suitably determine a market need and price for our scaffold, if we were to scale it up in the future.

Reflecting on this process, in combination with our investigation into intellectual property, we came to realise the extent of the challenge ahead of us if we decided to commercialise our Assemblase system. Although Brad discussed how legal protection enables Minomic to capitalise on their research investment, the process and loopholes described seem daunting. As such, the UNSW iGEM team decided to focus more on the experimental investigation and characterisation of our system.

One positive takeaway from our consultation with Brad was how arranging enzymes into tethered spatial organisations could have many further applications. Our scaffold’s could possibly assist bioremediation using metabolic engineering, or could even be adapted for use in the drug targeting space. Although these suggestions weren’t directly incorporated into our enzyme-centric design, the suggested applications were in the forefront of our minds as we discussed the future of our project with the wider community.

Research into the commercialisation of our scaffold has guided the focus of our project and influenced the experiments we have performed. As a result of the team’s research into the use of IAA and plant hormones in industry, we have gained information about the commercial applications of IAA. Although the prospects of commercialising our scaffold with a focus on IAA were bleak (upon discovering that IAA was not widely used in industry), this information pushed the team to explore further applications. Our meeting with Prof. Paul Groundwater gave us a new perspective on the target market of our scaffold. The suggestion to concentrate our pathways and commercialisation research on ones with products where chirality is an important factor during synthesis (e.g. Taxol side-chain synthesis and Astaxanthin synthesis) directed our approach to future applications from that point on.

This directed our conversation at the symposium that we hosted, where we asked the audience for their opinion on which area they would like to see advanced by synthetic biology tools. As 46% of the respondents voted for pharmaceutical applications, we decided to make Taxol our preferred commercial case study. Following this decision, we analysed the enzymes involved in Taxol side-chain synthesis with our modelling to determine the theoretical increase in product titre which could occur from Assemblase enzyme scaffolding. We also designed the gBlocks that would be required to integrate the Taxol enzymes into our project, but did not have the time to experimentally validate this section of work. We have put the effort into designing these experiments for future teams to continue, so that they will be able to pick up from where we left off.