Why did we do Physical Modeling?

Modeling the physical structure of a protein can reveal how its various domains and subunits arrange themselves in space. A protein’s structure is critical to its function, thus by modeling a protein’s structure, we can better understand its role1. The exact combination of proteins used to build our scaffold has not been previously tried, and thus knowledge of its physical arrangement is limited. We ran molecular dynamics simulations of the prefoldin complex in order to visualize how flexible its components are1. From this we were able to estimate the feasibility of being able to attach linkers, tags and other proteins to the prefoldin to form a scaffold. We believe that the simulation run on prefoldin paves the way for more complex simulations of the entire scaffold to be run in future. We were also able to estimate physical parameters important for our mathematical model.

We aimed to determine how the various appendages of the prefoldin molecule move in space. From this we aimed to estimate how close the enzymes could be clustered together when attached to the prefoldin complex.

We ran molecular dynamics on half of the alpha-beta prefoldin hexamer, with PDB ID 1FXK (Video 1). Due to our inexperience with running MD we enlisted the help of Donald Thomas from UNSW’s School of Chemistry. The amber software suite was used to run the molecular dynamics simulations, with a 1000 picoseconds simulation of the prefoldin molecule produced4; 5. Prior to running the simulation, the PDB file had to be manually corrected by removing unwanted ions and incorrect amino acids. This was required as many crystal structures are published with molecules left over from the crystallization, such as glycerol.

Video 1: Molecular dynamics simulation of the half-hexamer of prefoldin. The half hexamer contains 1 alpha and 2 beta subunits of the prefoldin hexamer. The two beta subunits flank the central alpha subunit.

From this simulation it is clear the prefoldin complex is flexible. The beta subunits can be seen branching away from the central alpha subunit, reaching a distance of 60 angstroms, whilst also collapsing in to a distance of 25 angstroms (Figure 1). Due to the flexible nature of prefoldin we believe it would be possible to attach a range of different enzymes to the scaffold, without being limited by the size of the enzyme to be attached. 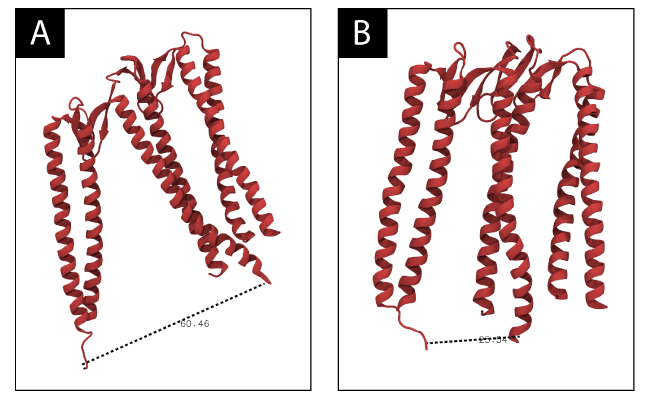 Furthermore, our actual system contains linkers composed of nine small residues (serines and glycines) positioned between the C-termini of each prefoldin subunit and the the Spy or Snoop Catcher. These longer linkers should afford even more flexibility of the scaffold, allowing the attachment of large enzymes.6. The C-terminal coil of one of the beta prefoldin subunits can be seen extending and coiling in the simulation, and pointing in different directions (Figure 2). Thus we believe that the linkers we have designed between the prefoldin subunits and the Spy/Snoop Catcher domains will provide further flexibility and space to attach enzymes of varying sizes. 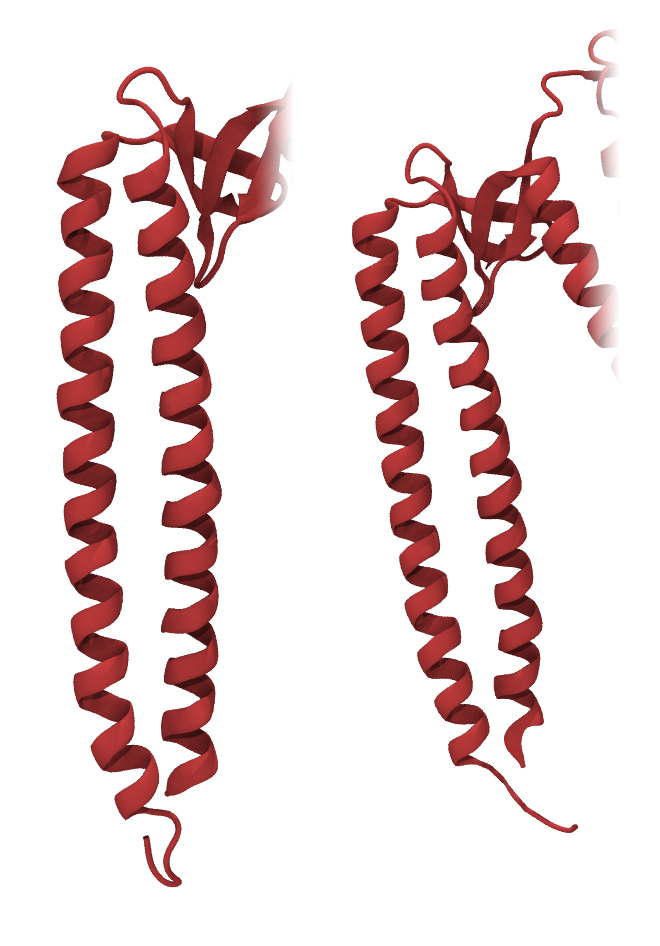 Figure 2: The C-termini coil can be seen retracted on the left image, whilst extended on the right image. This indicates flexibility at the linker regions on the prefoldin molecule.

We believe that these simulations show how the prefoldin molecule can be employed as a scaffold. In future we aim to run more complex simulations involving the tag-catcher system, and enzymes attached to prefoldin.

How this Informed the Mathematical Modeling 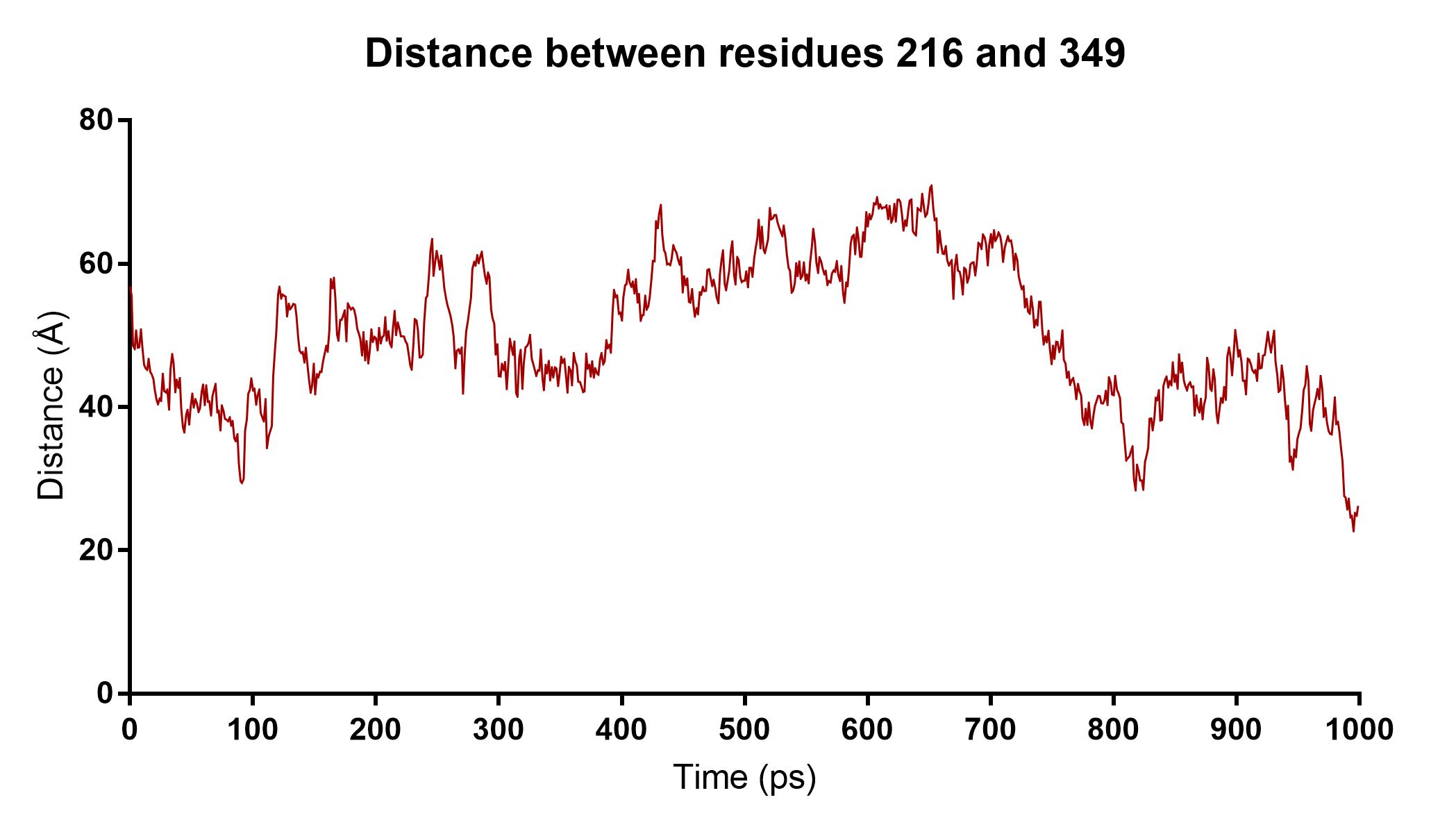 Figure 3: The distance (angstroms) between a single alpha and beta subunit over time (picoseconds).

The residues between which distance was measured correspond to the C-termini of the alpha and beta subunits. A still image of distance being measured between these residues is shown above (Figure 1). By measuring distance between the C-termini of the alpha and beta subunits, we are considering the distance between the point of attachment for the catcher-tag system. From the graph, we estimate that over this short time period the subunits average a separation distance of about 50 angstroms. We used this distance to calculate the diffusion of substrate between the enzymes, and subsequent product yield at this distance in our mathematical model of enzyme kinetics and diffusion.

Running molecular dynamics served as an effective method of modelling the physical nature of our system. We were able to run MD on half of the prefoldin hexamer; PDB ID 1FXK. The major obstacle to running the simulations on the full scaffold was the need to edit the pdb files generated from crystal structures. Considering that we assembled the prefoldin-catcher-tag-enzyme complex manually in Chimera our structure likely had more errors. Generally speaking, the major errors that need to be corrected are erroneous ions and amino acids that need to be removed 4,5. When running the simulation on a half hexamer, we have to acknowledge that any results used to inform our use of the full scaffold are extrapolations. The flexibility shown by the half hexamer does lend support to prefoldin's usability as protein scaffold. However without the tag-catcher system and enzymes attached, we cannot know exactly how the molecule will move. We believe that by adding a series of 9 GSG linkers to the prefoldin C-termini, we created more flexibility in the scaffold 6. The added flexibility of the GSG linkers, combined with the flexibility shown of the half-hexamer in molecular dynamics, supports the ability of our scaffold to support a range of enzymes of different sizes (Figure 1, 2). By running the molecular dynamics, we were able to estimate the distance between enzymes for use in our mathematical model (Figure 3). Thus conducing molecular dynamics was useful in characterising our scaffold, revealing it's physical flexibility, and potential to cluster enzymes closely together.