Self-assembly is the spontaneous organisation of individual subunits without central direction. A self-assembling protein scaffold offers an elegant method of spatially organising enzymes for co-localisation. Other approaches for enzyme scaffolding include the use of microcompartments, DNA and RNA scaffolds and fusions of aptamer domains1. We designed experiments to investigate two distinct assembly processes for our enzyme-scaffold complex: the oligomerisation of alpha prefoldin and beta prefoldin, and the formation of isopeptide bonds between SpyTags and SnoopTags and SpyCatchers and SnoopCatchers respectively.

Alpha prefoldin (aPFD) (15.7 kDa) and beta prefoldin (bPFD) (13.8 kDa) derived from Methanobacterium thermoautotrophicum oligomerise to form heterohexameric structures (87 kDa), consisting of 2 alpha subunits and 4 beta subunits2 (Figure 1). The prefoldin hexamer is assembled through interactions between beta hairpins in each subunit. These beta hairpins form two 8 stranded up and down beta barrels. Appropriate methods for analysing the assembly of prefoldin hexamers include techniques such as Size Exclusion Chromatography (SEC), Native-PAGE and Multiangle Light Scattering (MALS), as these retain the native structure of assemblies and can distinguish between molecules of varying size. SEC was used to demonstrate the formation of aPFD and bPFD hexamers and other oligomers, and also could enable the investigation of the monodispersity of the sample. We also aimed to investigate if aPFD and bPFD could hexamerise when fused with SpyCatcher or SnoopCatcher. 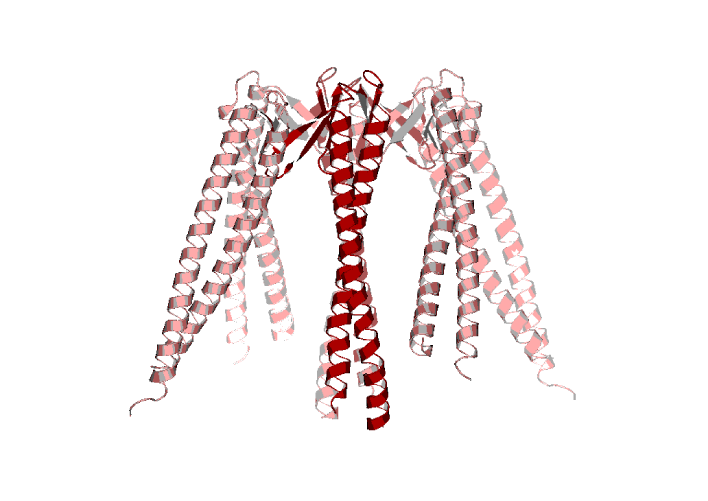 The SpyCatcher and SpyTag system were derived from Streptococcus pyogenes fibronectin-binding protein FbaB3. A spontaneous isopeptide bond forms between a lysine residue on the SpyCatcher protein and an aspartic acid on the SpyTag peptide, covalently fusing the two components (Figure 2). Fusion of the SpyCatcher and SpyTag to different proteins enables their spontaneous covalent conjugation within minutes. A similar attachment mechanism was developed from the adhesin RrgA from Streptococcus pneumoniae, yielding SnoopCatcher and SnoopTag which also covalently bind to each other4. In addition, the attachment systems are orthogonal, as SnoopTag/SnoopCatcher does not interact with SpyTag/SpyCatcher. 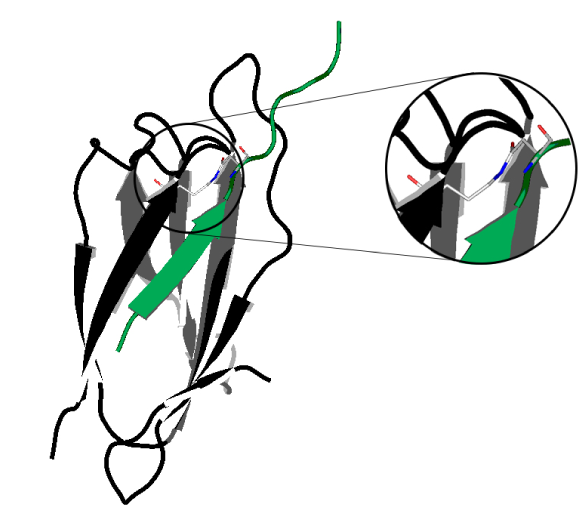 The use of both systems in tandem enable specific and irreversible attachment of tagged enzymes with aPFD fused to SpyCatcher or bPFD fused to SnoopCatcher. The prefoldins can then self-assemble to form an enzyme-scaffold complex. SDS-PAGE was employed to investigate the Tag/Catcher reaction, as the sodium dodecyl sulphate and heat treatment before analysis denatures proteins, while retaining covalent interactions. Any covalent interaction between an enzyme and a prefoldin-catcher fusion could be determined, indicating the binding of an enzyme to our scaffold.

Gamma prefoldin (gPFD) filaments was proposed as an alternative scaffold to alpha and beta prefoldin hexamers. These filaments are composed of a single protein, related to aPFD and bPFD, that polymerises linearly6. Although it is difficult to control the length of filaments7,8 and the distribution of a mixture of fusions with SpyCatcher or SnoopCatcher, the filaments enable increased density of enzyme clustering. To investigate if gPFD filaments are able to form when fused to SpyCatcher and/or SpyCatcher and a SpyTagged enzyme, Transmission Electron Microscopy (TEM) was used to image gPFD, gPFD fused to SpyCatcher (gPFD-SpyC) and gPFD-SpyC mixed with a SpyTagged enzyme (IaaH-SpyT).

SEC, SDS-PAGE and TEM provide valuable information about the required conditions for assembly of our enzyme-scaffold complex. A multiplexed approach to the characterisation of the assembly process enable us to piece together a more complete understanding of the enzyme scaffold and its potential applications to industry and foundational research.

To investigate and demonstrate:

IMAC purified alpha prefoldin and beta prefoldin were mixed in a 1:2 molar ratio to a total volume of 1 mL at concentrations of 1 mg/mL in PBS pH 8 and incubated overnight at 4°C. Size Exclusion Chromatography was kindly performed by Ms Hélène Lebhar. Alpha prefoldin, beta prefoldin and the mixture were loaded onto a Superdex S200 Increase 10/300 GL column using an AKTA start, and separated by SEC. The chromatograms of the three runs were then overlayed for analysis, and compared to the molecular weight standards thyroglobulin (670 kDa), gamma-globulin (158 kDa), ovalbumin (44 kDa) and myoglobulin (17 kDa).

IaaH fused with SpyTag and proteins fused to SpyCatcher (aPFD-SpyCatcher, gPFD-SpyCatcher and SpyCatcher-gPFD-SpyCatcher) were mixed at a concentration of 15 µM and 3 µM respectively in a total volume of 250 µL in PBS pH 8, and incubated at room temperature. After 0, 10, 20 and 30 minutes of incubation, a 10 µL sample was taken and boiled with 5 µL of 4x Bolt LDS sample buffer for 10 minutes at 95°C to cease SpyCatcher reactivity while preserving any covalent interactions. The samples were then examined on SDS-PAGE.

SEC chromatograms of aPFD, bPFD and a 1:2 molar mixture of aPFD and bPFD were overlayed, revealing the formation of larger molecular weight structures in the mixture of aPFD and bFPD (Figure 3). A calibration curve was constructed using the molecular weight standards (Figure 4). The peak was not of a Gaussian distribution, suggesting that the larger structures were not monodisperse, and that several oligomers exist. 4 peaks were identified as potential oligomeric structures, with the largest peak eluting at 13.3 mL. 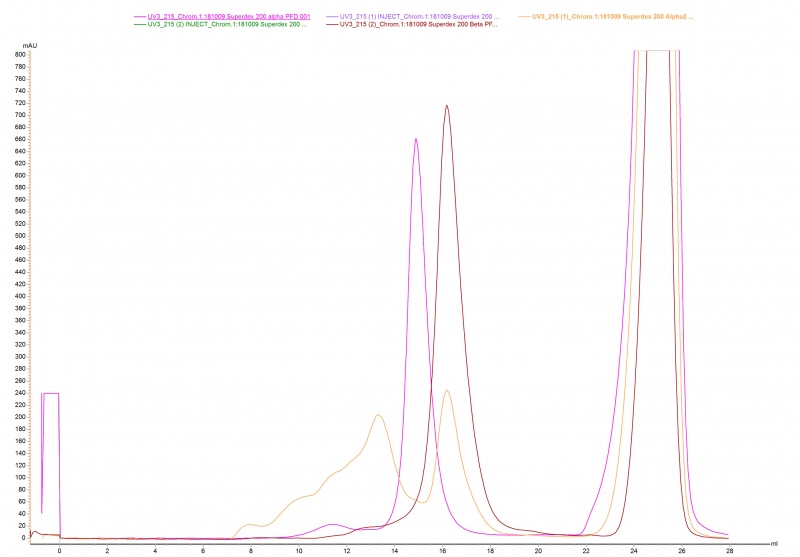 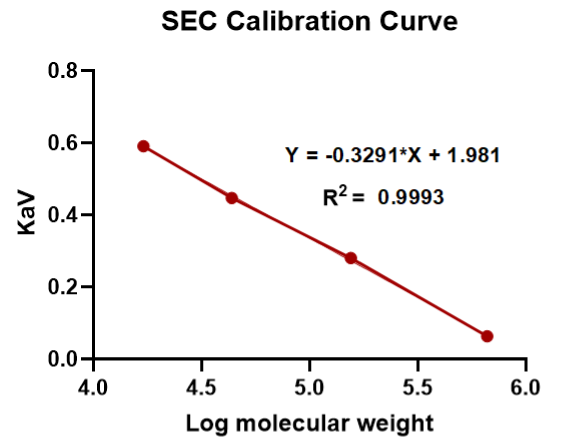 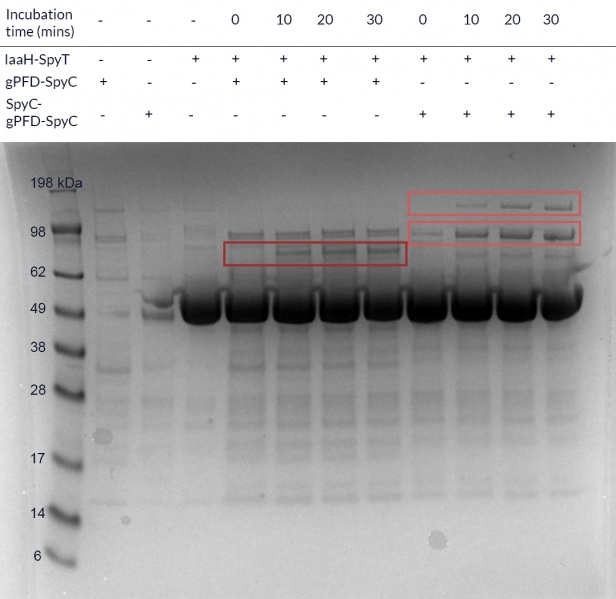 TEM was performed on wild type gPFD, gPFD-SpyC and gPFD-SpyC reacted with IaaH-SpyT. Filaments were observed for all samples (Figure 7).

We have demonstrated the self-assembly of prefoldin hexamers and filaments, and covalently attached prefoldin-SpyCatcher fusions to IaaH fused with SpyTag (Figures 5, 6, and 7). Hexamers of aPFD and bPFD were identified by SEC, but were not monodisperse (Figure 3). It appears that larger structures are present. Gluteraldehyde cross-linking on collected SEC fractions could be employed to determine the oligomeric state of the eluted peaks9. Leroux et al.10 also propose that aPFD and bPFD can form oligomers on their own. Their characterisation of the proteins by SEC found that the molecular weights predicted by SEC on aPFD and bPFD were higher than the actual molecular weight. This is likely due to the non-globular structure of the proteins. Thus the predicted molecular weights and oligomer status of the earlier peaks we obtained from the aPFD/bPFD are unlikely to be accurate. It is also possible that our long incubation time of aPFD with bPFD may have influenced the formation of larger oligomers. Characterisation of the assembly of prefoldin hexamers is essential, as it enables the co-localisation of enzymes. We would like to further investigate the range of conditions that prefoldin hexamers can assemble, and to attempt assembly of prefoldin-catcher fusions. In addition, we would like to investigate the assembly of aPFD and bPFD with other techniques such as Native-PAGE and MALS.

IaaH-SpyT was attached to a range of prefoldin-SpyCatcher fusions. aPFD-SpyC, gPFD-SpyC and SpyC-gPFD-SpyC assemblies with IaaH-SpyT assemblies were demonstrated by SDS-PAGE, and gPFD filaments were analysed by TEM. Full occupancy of gPFD by the enzyme was not achieved despite a 5x excess of the enzyme. This is likely due to the close packing of SpyCatchers along the gPFD filament, which do not accommodate the large enzymes. Comparison of TEM images suggest that steric interactions between the enzyme along the gPFD filament distort the filamentous assembly or cause clumping. This lends support to the use of aPFD/bPFD hexamers as an enzyme scaffold, however this is too small to image with TEM. Other techniques such as X-ray crystallography, cryo-electron microscopy or small angle X-ray scattering may be more suitable for structural analysis of aPFD/bPFD.

Due to time constraints, we were unable to generate all of the protein constructs that were required for our experimental plan. Further experiments would involve testing the SnoopCatcher/SnoopTag interaction and its orthogonality with the SpyCatcher/SpyTag, assembly of aPFD-SpyC and bPFD-SnoopC fusions and the assembly of the prefoldin-enzyme complex. In addition, we would like to test the assembly of our scaffold with a range of SpyTagged and SnoopTagged proteins. This wide range of experimental characterisation of the assembly process provides a more complete understanding of the enzyme scaffold and the ways in which it may be applied to other biosynthetic or bioremediation pathways.