Protein scaffold components and proteins that attach to the scaffold must be expressed and purified for self-assembly and enzyme activity experiments. Sequence-verified plasmids were heat shock transformed into Escherichia coli cells and expressed for recombinant protein production. The proteins were then purified from cell lysates with Immobilised Metal Affinity Chromatography (IMAC). Nine proteins have been successfully expressed and purified, enabling the construction of our scaffold-enzyme complex.

A large range of proteins are required for the construction and characterisation of our scaffold-enzyme complex. The scaffold consists of the molecular chaperones alpha prefoldin (aPFD) and beta prefoldin (bPFD), derived from Methanobacterium thermoautotrophicum1, fused with SpyCatcher2 (SpyC) and SnoopCatcher3 (SnoopC) respectively on their C-termini. These self-assemble to form a hexameric complex that is able to covalently bind SpyTags and SnoopTags. Two enzymes were designed for attachment to the scaffold: the enzymes tryptophan 2-monooxygenase (IaaM) originating from Pseudomonas savastanoi fused with a SnoopTag (SnoopT) and indole acetamide hydrolase (IaaH) originating from Alcaligenes sp. Strain HPC12715 fused with a SpyTag (SpyT). In addition, the fluorescent proteins mVenus and mCerulean36 were fused with a SpyTag and SnoopTag respectively. All proteins have been expressed with a 6xHis-Tag, utilising the affinity of the HisTag for nickel ions for IMAC purification7.

Initial attempts to express these proteins in E. coli using the pETDuet-1 and pRSF-Duet-1 vectors were unsuccessful, likely due to our design of the plasmids. Following the subcloning of the inserts into a new vector, pET-19b, 5 of these proteins were successfully expressed and purified. In addition, strains of Escherichia coli (E. coli) containing plasmids for His-tagged mVenus, mCerulean3, gamma prefoldin with a C-terminal SpyC (gPFD-SpyC) and gamma prefoldin with an N- and a C-terminal SpyC (SpyC-gPFD-SpyC) were used for protein expression and purification.

We have developed a robust method for recombinant expression and purification of our novel protein scaffold. The purity of the proteins was investigated with SDS-PAGE, which is essential to ensure the quality and accuracy of all experimental characterisation of our scaffold-enzyme complex.

To produce, purify and characterise prefoldin scaffold proteins and proteins that attach to our scaffold for further experiments on the stability, assembly and efficacy of our enzyme scaffold.

Escherichia coli T7 Express cells (NEB) were heat shock transformed with a plasmid containing the gene of interest. The bacteria were grown in Luria broth (LB) media with ampicillin at 37oC at 200 rpm, induced with isopropyl β-D-1-thiogalactopyranoside (IPTG) at 1 mM when the OD600 of the media reached 0.6 and then grown overnight at room temperature. The cell pellet was collected by centrifugation and lysed by sonication. The cell lysate was then centrifuged to remove cell debris, and only the soluble fraction was collected. The soluble fraction was loaded onto a HisTrap HP 1 mL column (GE Healthcare) and purified using immobilised metal affinity chromatography (IMAC). Elutions were analysed with SDS-PAGE and buffer exchanged into PBS pH 8 using Pierce Protein Concentrators PES, 10K MWCO, 2-6 mL (Thermo Scientific) or by dialysis. The concentration of buffer exchanged proteins were then quantified by the bicinchoninic acid (BCA) assay (Figure 1). 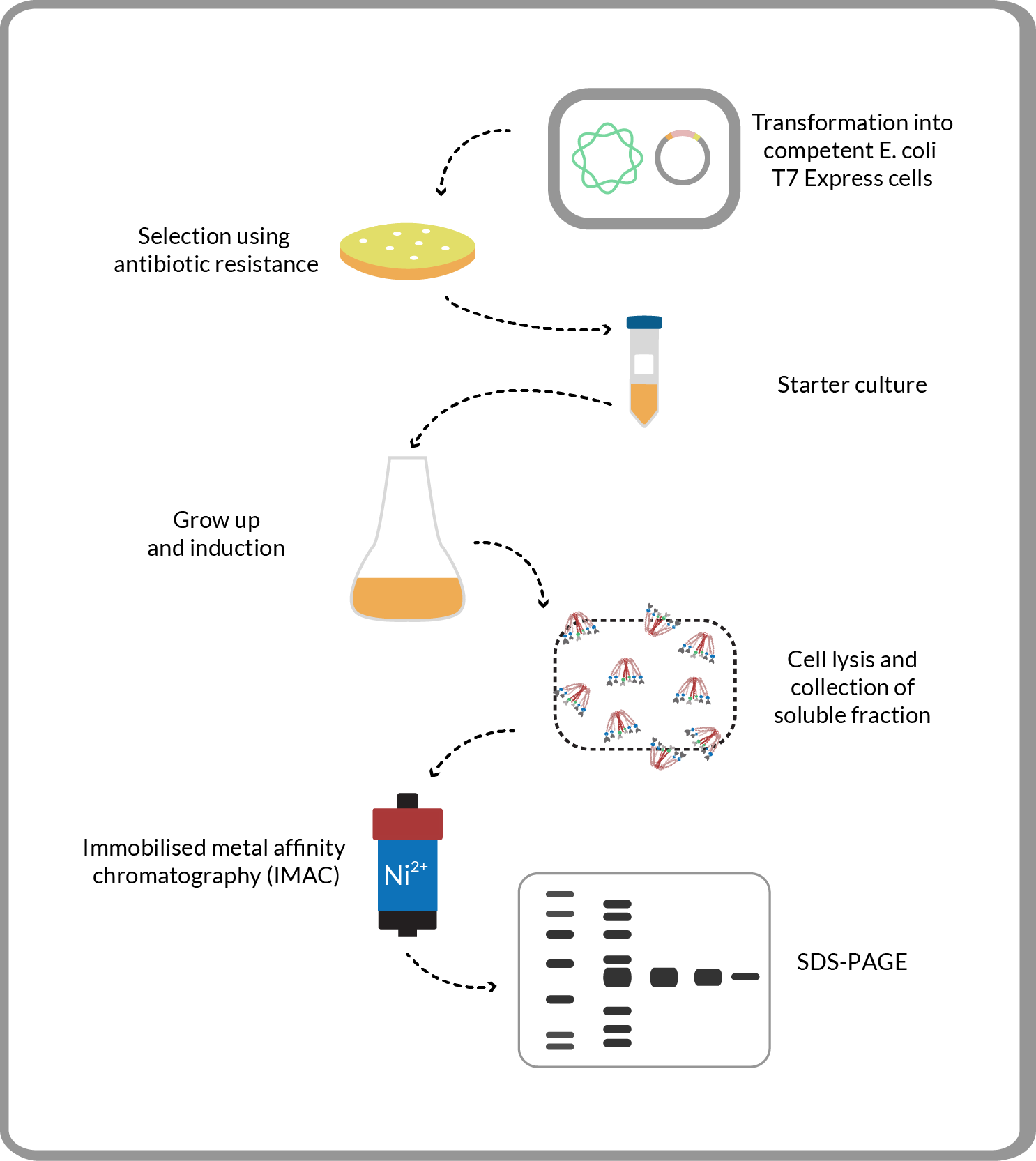 Figure 1: Summary of methods for protein expression and purification.

Detailed protocols can be found on our experiments page.

Following the successful subcloning of inserts from pETDuet-1, pRSFDuet-1 or pSB1C3 into pET-19b, 9 proteins were successfully purified and analysed by SDS-PAGE (Figure 2). In addition, 3 parts from the Registry of Standard Biological Parts (BBa_K1789000, BBa_K1789001 and BBa_K515100) were expressed, but were not purified. These parts contained the enzymes IaaM and IaaH without His-tags. 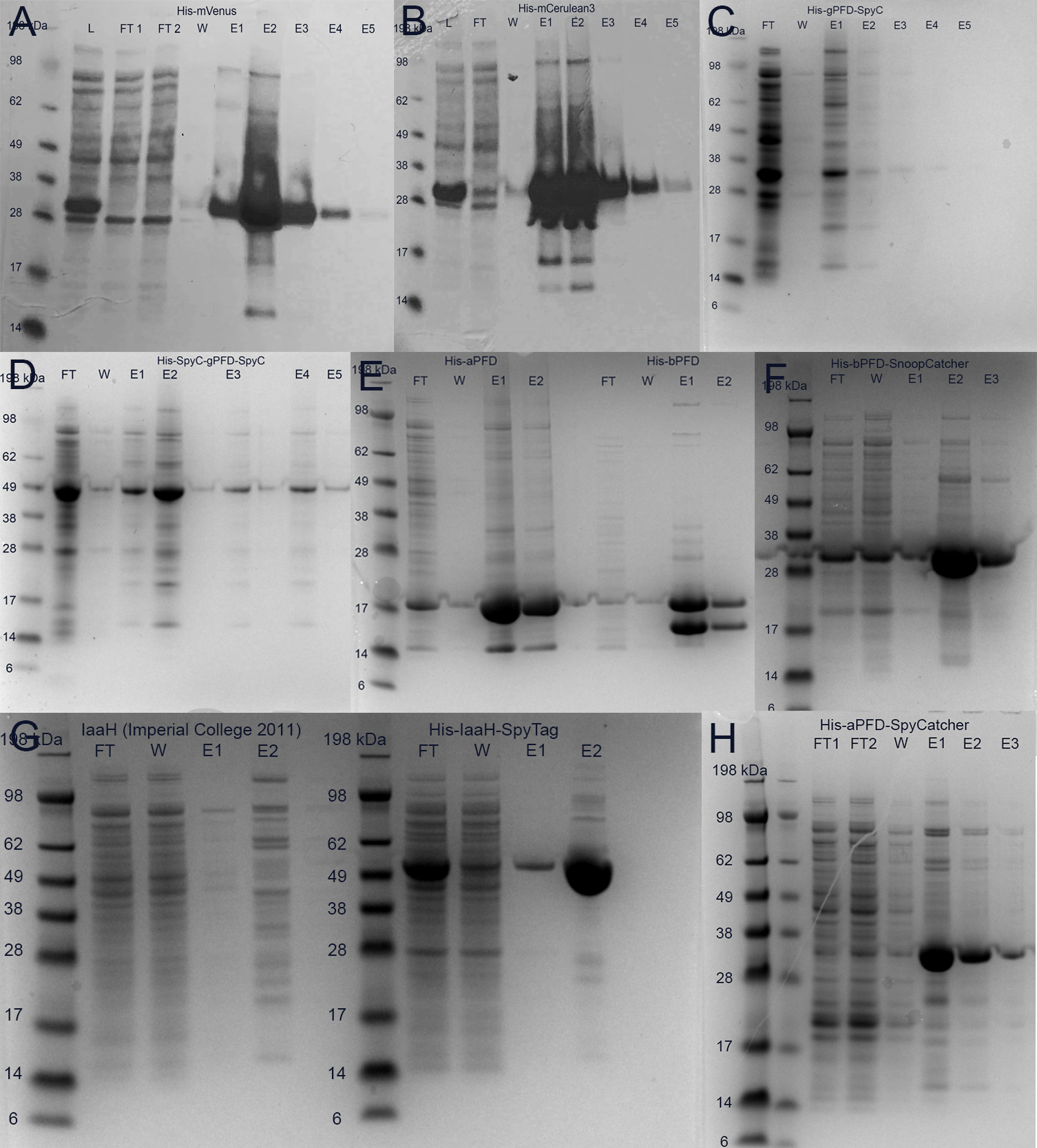 Initial attempts at protein expression were unsuccessful using pETDuet-1 and pRSFDuet-1 plasmids. After cloning our desired inserts into these plasmids, we attempted to express these proteins, but no expression could be detected by SDS-PAGE or Western Blot. Both E. coli T7 Express and Lemo21(DE3) cell lines were used for expression, and tested with 0.1 mM, 0.4 mM and 1 mM IPTG inductions. We hypothesised that the design of our plasmids inhibited expression, as the BioBrick prefix was placed between the ribosome binding site and the start codon of our coding sequence. We decided to subclone our inserts into pET-19b and remove the BioBrick prefix and suffix before retrying protein expression and purification.

The following BioBricks were expressed for comparison with the tagged versions of the enzymes:

Following protein purification, we encountered issues with solubility for some proteins. This was likely due to non-optimal buffer conditions or high concentrations of protein. Further experimentation and optimisation is required to identify the range of conditions in which these proteins are stable and able to assemble. In the future, we would like to express and purify all of our successfully cloned constructs, including the first enzyme of our reaction pathway, tryptophan-2-monooxygenase (IaaM), fused to the SnoopTag, fluorescent proteins with appropriate tags for FRET experiments and enzymes from other pathways fused with SpyTag and SnoopTag. In addition, we would like to increase the purity of our purifications and attempt larger scale protein expressions. These provide materials that are fundamental for the characterisation of the assembly of our scaffold, the distance between the attachment site, the rate of indole acetic acid production and the modularity of our system.