Auxins are plant hormones which are involved in the regulation of plant growth and development. The biosynthesis of the auxin indole-3-aecetic acid (IAA) was used as a test pathway for our scaffold system, thus a protocol was developed to investigate the functionality of biosynthetically produced IAA in a plant growth assay compared to commercially available IAA. To this aim, Arabidopsis thaliana seedlings were grown in media containing varying concentrations of IAA to observe its effect on plant growth and development. Increased lateral root growth was observed in seedlings exposed to increased concentrations of exogenous IAA, which is consistent to other reports in the literature. At the same time, primary root growth was decreased alongside increased IAA concentration. This may indicate that the concentrations of IAA used were too high, as again this matches reports in the literature that too much exogenous IAA can inhibit root elongation. Therefore, if we are to re-attempt this experiment in the future we will first have to determine the optimal concentration of IAA to use for our plants. Nevertheless, we have developed a protocol that could be used in the future to observe the functionality of the IAA product produced with our scaffold compared with commercially available IAA.

Auxins are plant hormones (phytohormones) which are involved in the regulation of plant growth and development. Indole acetic acid (IAA) is the most widely characterised auxin, and the primary auxin found in most plant species. It is associated with many physiological processes in plants including cell elongation, cell division, tropisms to light and gravity, and root initiation and development.

Plants can naturally synthesise auxins, and the biosynthesis of IAA in A. thaliana occurs predominantly through a tryptophan dependent pathway. Bacteria can also synthesise IAA through a variety of pathways, and often utilise IAA to interact with and colonise plants. To test our scaffold system with a proof of concept, we chose the two-step indole-3-acetamide pathway for IAA biosynthesis, the best characterised IAA biosynthetic pathway in bacteria.

Although plants can synthesise IAA de novo, application of exogenous phytohormones is common in industry to stimulate specific responses. Thus auxins, and phytohormones more broadly, have commercial significance. In order to understand the commercial significance of IAA we consulted with real world users of auxins and conducted experiments with the model plant A. thaliana to observe the effect of IAA on plant development.

To observe the effect of the auxin indole-3-acetic acid on Arabidopsis thaliana growth and development.

Wild type A. thaliana seeds were surface sterilised in a solution of 2.5% bleach and Tween for 10 minutes, and subsequently washed with sterile water. Seeds were then placed in a sterile solution of water and 1% sucrose and left to stratify at 4°C for two days. Seed germination occurred in the 1% sucrose solution at room temperature.

Germinated four-day old seedlings were transferred to square MS agar plates supplemented with 1% sucrose, containing IAA concentrations of 0 µM, 1 µM, 10 µM and 100 µM. Plates at each concentration of IAA were prepared in triplicate with approximately five seedlings placed in a line 2 cm from the edge of the plate. The plates were partially covered in foil, leaving only the top 2 cm exposed in order to limit IAA photodegradation and simulate the natural growth conditions of higher plants whereby only shoots are exposed to light. Plates were stored upright, illuminated and incubated at room temperature for 20 days. Primary root length and lateral root numbers were measured at four, six, eleven and twenty days following the initial seedling transplantation (Figure 1). Detailed protocols can be found on our experiments page. 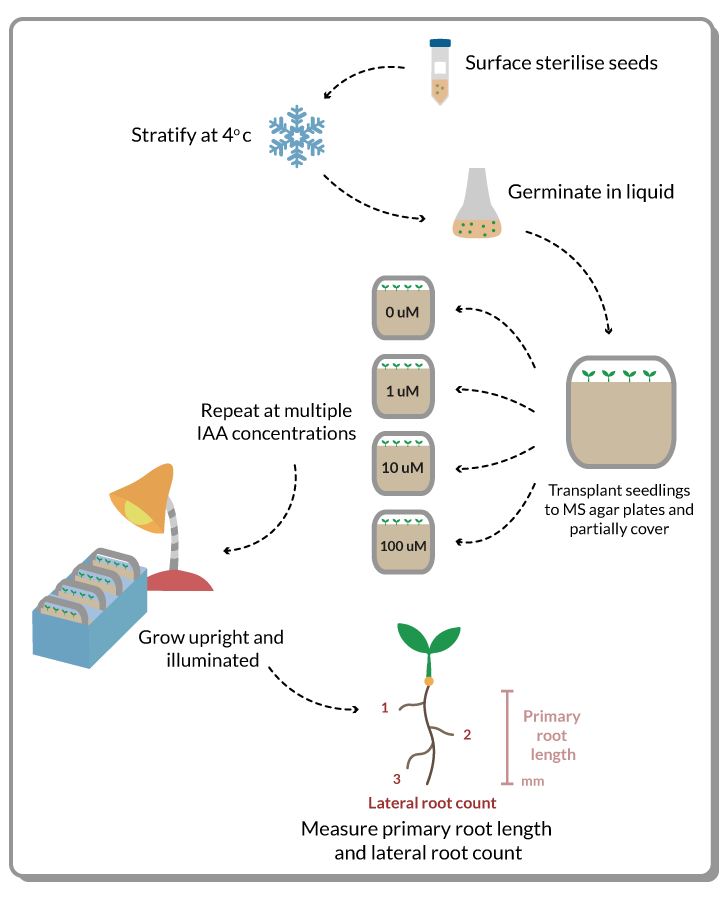 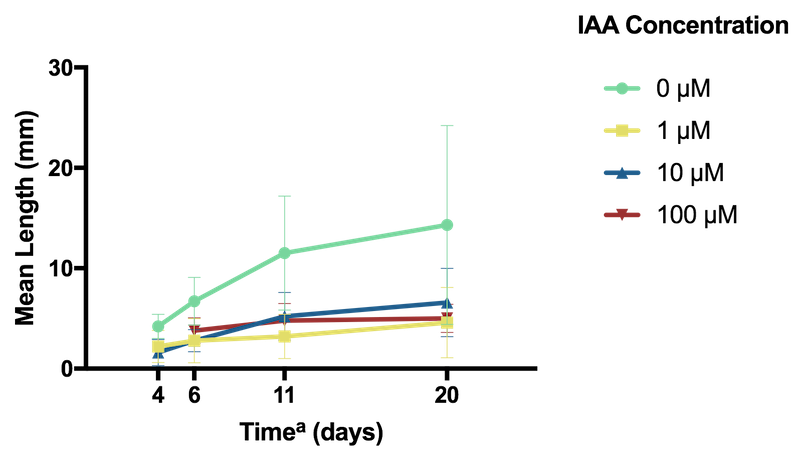 Conversely, lateral root count was highest in specimens grown in the media containing the highest, 100 µM concentration of IAA (Figure 3). 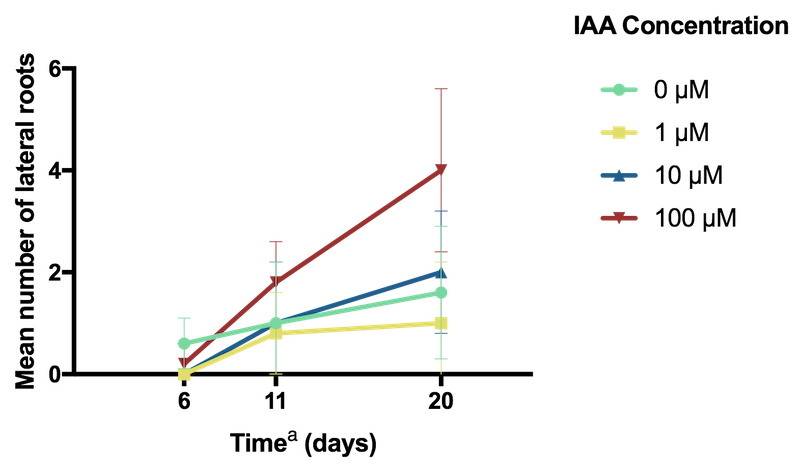 Generally, plant growth (including shoots and leaf growth) was inhibited as the concentration of IAA was increased (Figure 4). 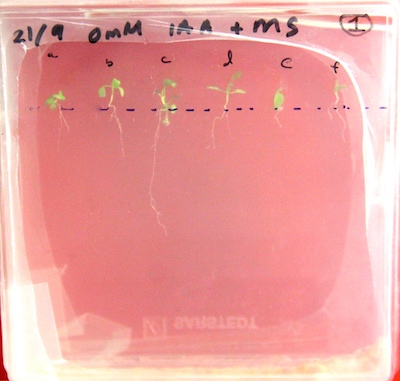 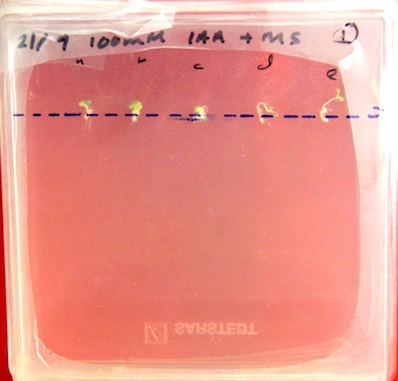 The promotion of lateral root formation at high concentrations of IAA is consistent with previous literature which has shown that IAA promotes, and is essential for lateral root development in A. thaliana ,.

Overall, the control specimens that were grown with no IAA appeared to exhibit the best development, with consistently greater leaf and shoot growth (Figure 3). In contrast, the decreased root elongation and increased formation of lateral roots observed in the specimens frown with the addition of 100 µM IAA is similar to a stress-induced morphogenic response of A. thaliana .

Our results indicate that exogenous IAA facilitated lateral root sprouting but inhibited primary root elongation at the concentrations that we used. This is consistent with the literature and with comments made by researchers at the PlantBank facilities whom we consulted with. Auxins are used by researchers at PlantBank, typically to stimulate adventitious root growth in their tissue culture specimens. Adventitious root growth in this context refers to roots which have developed from an unusual location (i.e. leaves or shoots) and allows for cultured specimens grown in the laboratory to be transplanted into soil and grown outside. This has commercial significance as tissue cultured specimens must be rooted and established in soil to be sold to a retail consumer.

However, researchers at the PlantBank facility exclusively use indole-3-butyric acid (IBA), another auxin, as they had found in previous experiments that IAA showed no benefits and that IBA was easier to work with.

These findings may be partially explained by the relative instability of IAA when compared to IBA. Indole-3-aecetic acid is sensitive to photodegradation, which can be accelerated by the minerals present in MS media. Although IBA is also subject to photodegradation, the effects are less than that of IAA with tests conducted in MS media finding concentrations of IAA were reduced by more than 97% after 20 days in the light compared to a 60% reduction in IBA.

To account for light sensitivity of IAA, our experimental design was adapted to minimise IAA photodegradation. We conducted all media preparation and plating in a dark laminar flow hood and partially covered our plant samples during growth. 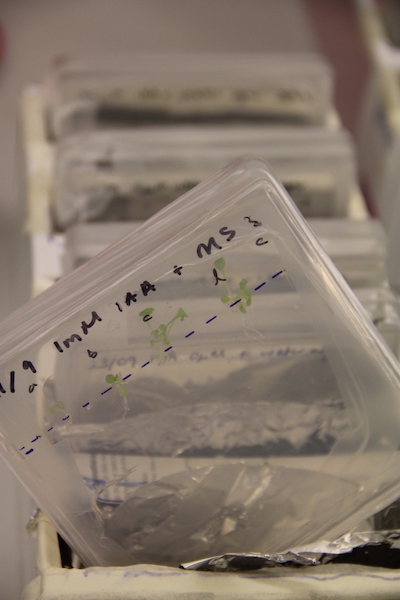 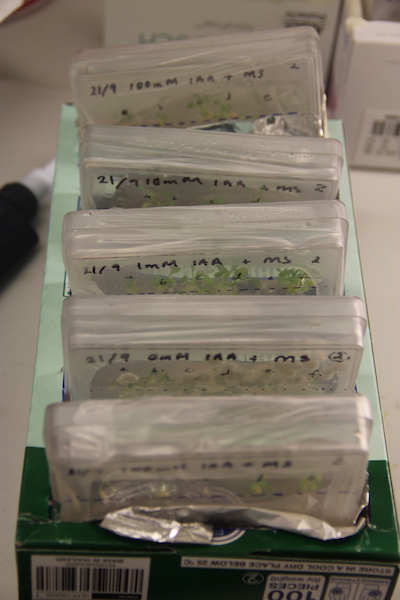 Figure 5: Experimental set up of plants to minimise IAA photodegradation.

Implications for Commercialisation with our scaffold

After learning of the exclusive use of IBA rather than IAA for exogenous application of auxin in tissue culture at PlantBank, in combination with the results of our experimental attempts to observe the effects of IAA on A. thaliana growth and development, we determined that using this method to assess the effect of exogenous IAA on plant root growth requires further optimisation. In particular, the concentration of IAA needed to provide a beneficial rather than inhibitory effect on root growth needs to be determined. Nevertheless, we observed IAA having an effect on our plant roots, and with future optimisation we will be able to compare the effect of commercially available IAA to the effect of IAA biosynthesised with our Assemblase scaffold.

Due to time constraints, we were not able to conduct experiments with IAA synthesised using our scaffold. However, testing the effects of IAA purchased from Sigma Aldrich allowed us to begin developing a protocol which can be further refined into the future. Primary root growth decreased with increasing IAA concentration which may indicate that the concentrations of IAA used were too high, as reports in the literature state that too much exogenous IAA can inhibit root elongation. Therefore, if we are to re-attempt this experiment in the future we will first have to determine the optimal concentration of IAA to use for our plants