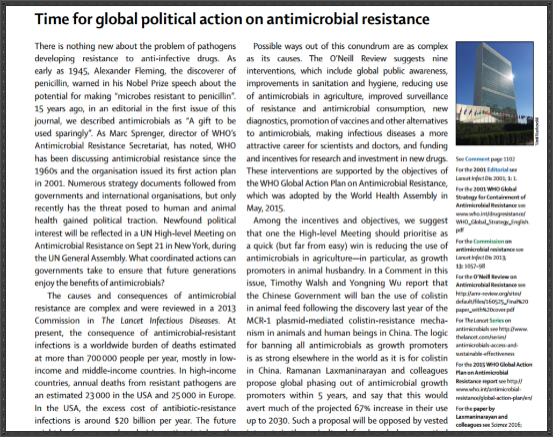 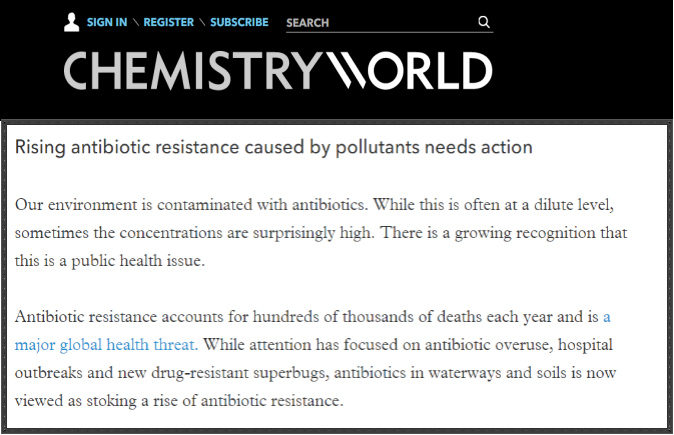 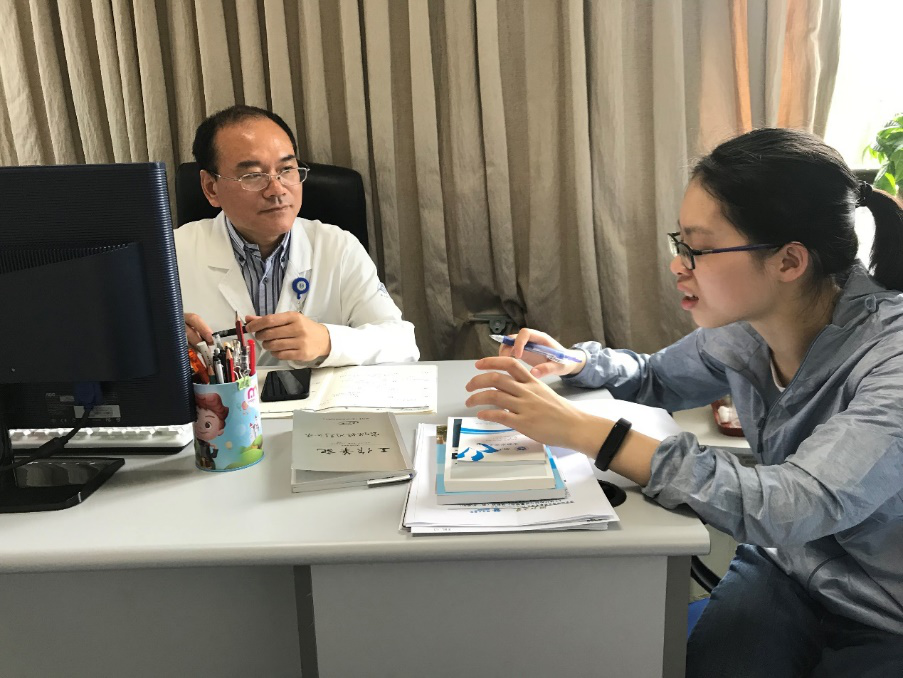 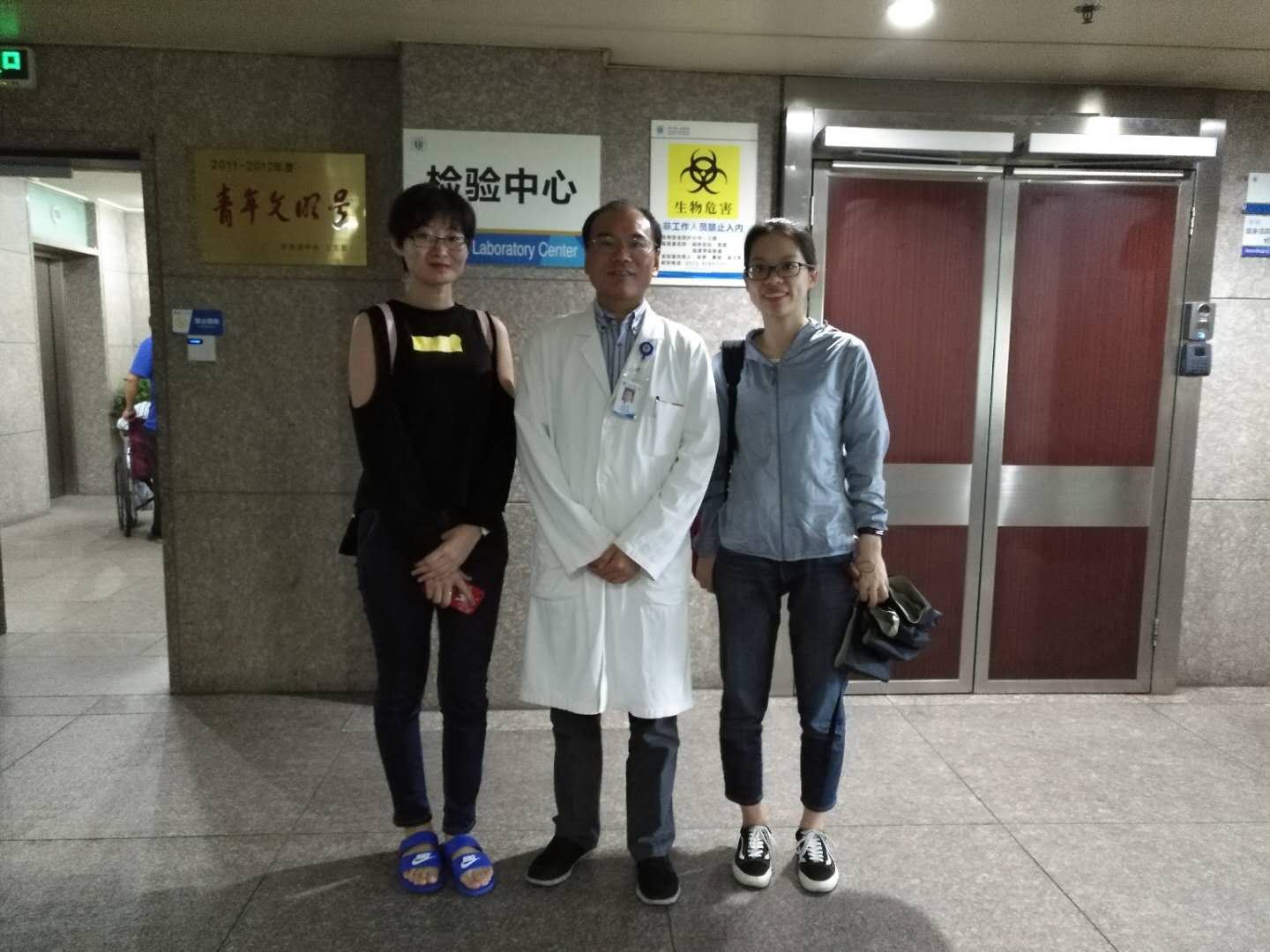 After literature investigation, we know that the problem of bacterial resistance is very serious. In practice, we wanted to learn more about the dangers of drug resistance, and we visited the people's hospital. Doctors told us that for the patients in the hospital, antibiotics are used for most of the symptoms, which aggravates the resistance of bacteria to antibiotics. Resistant bacteria are everywhere and getting stronger. With the development of this way, some diseases of human beings may face the situation of no medicine. 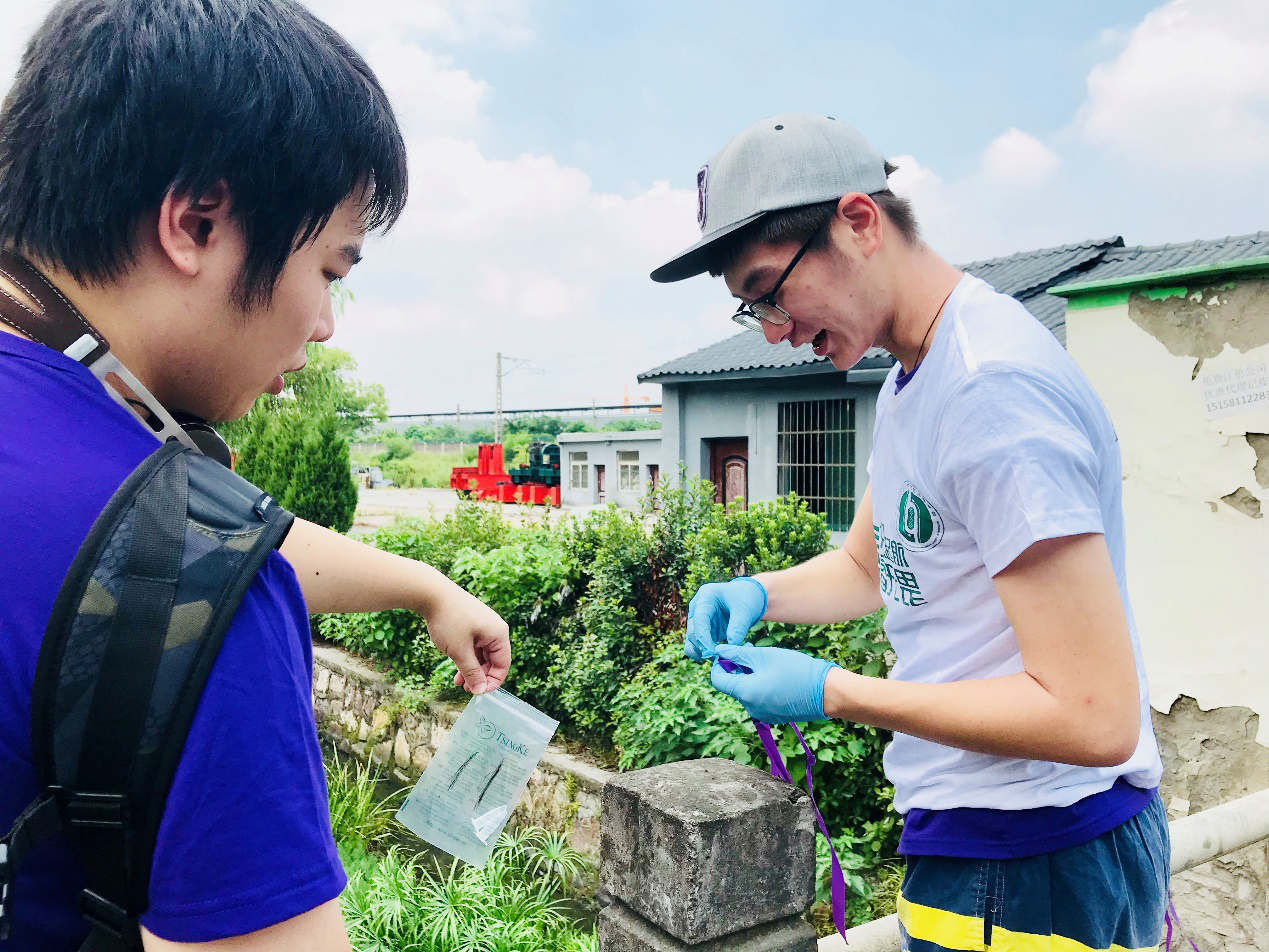 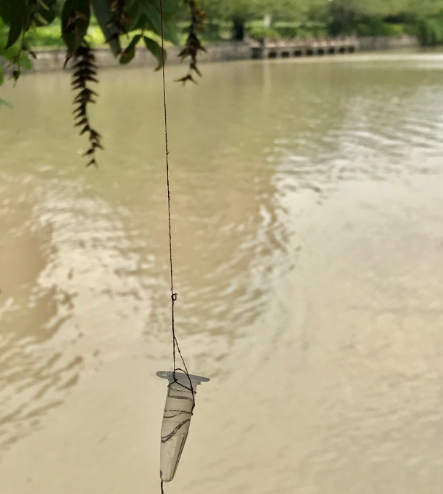 We selected an aquaculture farm in Hangzhou for research. It mainly investigates the content of resistant bacteria in the aquaculture environment and the types of resistance genes contained therein. After the investigation, we found that most common resistance genes exist in the farm environment. If the degradation of a specific resistance gene alone does not solve the problem of a wide range of resistance gene contamination, we believe that we cannot just stop at the most resistant gene in the treatment environment should focus on bigger problems and solve the bacterial resistance problem as thoroughly as possible. After our investigation, we hope to solve the problem of bacterial resistance more, so we changed the experimental plan. For details, please see the results of the wet group; in addition, we collected water samples in the pond next to the farm, the river next to the farm and the river next to the school.

Click here to link the results of our research.

We visited the environmental protection department of Zhejiang province. We communicated with the environmental protection bureau about the current situation of the discharge of antibiotics and resistance genes in Zhejiang province. We learned that there is no clear laws and regulations to limit the emission of resistant bacteria and resistance genes in Zhejiang province.We introduced our project to the stakeholders, they supported our project very much, thought of our project is beneficial to human development, to solve the problems facing the world, they put forward their views about the project for many times, to help us more professional, more practical way of looking at bacterial drug resistance.We are aware of the new environmental pollution research of the resistance gene will cause the public and the government authorities to the attention of the genetic pollution, formulate the corresponding policy and strengthen supervision, eventually, genetic pollution assessment, reduce or control the damage to the ecological environment and human health, and promote the healthy development of public health 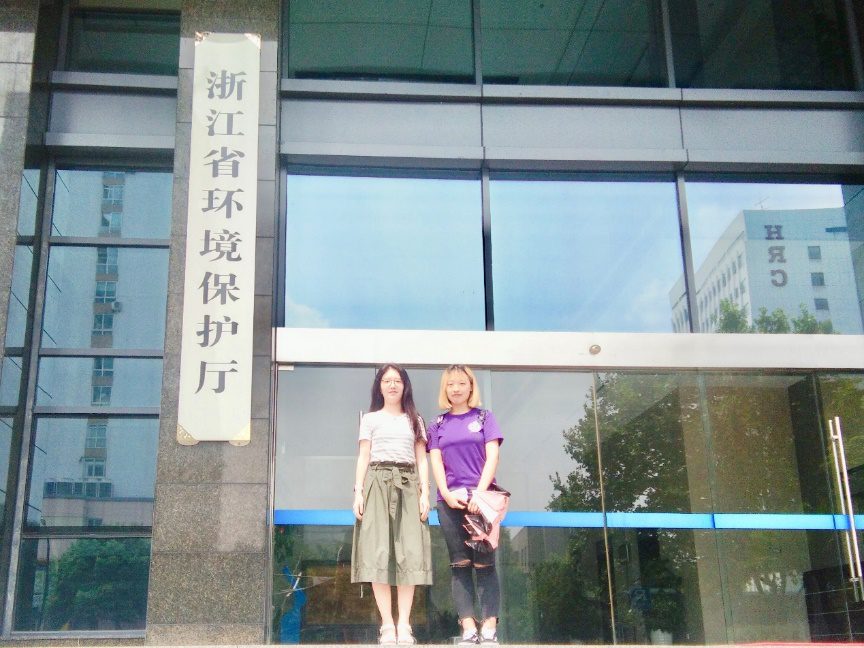 We discussed the current state of resistance gene contamination. We learned that at this stage, the factory mainly uses E. coli systems and yeast systems for research. Laboratories are generally resistant to three methods: alkaline cooking, high temperature inactivation, and organic reagents. The bacteria are processed. However, this does not completely eliminate the resistance gene. In addition, she is very supportive of our project, believes that our project has certain value for environmental protection, and provides valuable suggestions for our project products, we have also made improvements.

2. What have we learned and what impact it has on our projects?

Zhang Wei mentioned that if the drug resistance gene in the engineered bacteria is removed before the cell is discharged, it is valuable for solving the problem of resistance gene contamination, and to some extent, preventing the contamination of the resistance gene, so that it does not So easy to spread. Our project will have great prospects for use in the market; in addition, Zhang Wei has put forward suggestions for our project. If the actual application is to be carried out, the most important problem is that in terms of cost, the cost mainly comes from two aspects. Control system hardware, on the other hand, is from the cost of electricity, electricity is mainly converted into light energy and heat, so there is a need for further cooling systems. The equipment of our project requires careful consideration of the sensitivity of light and the occlusion of light. 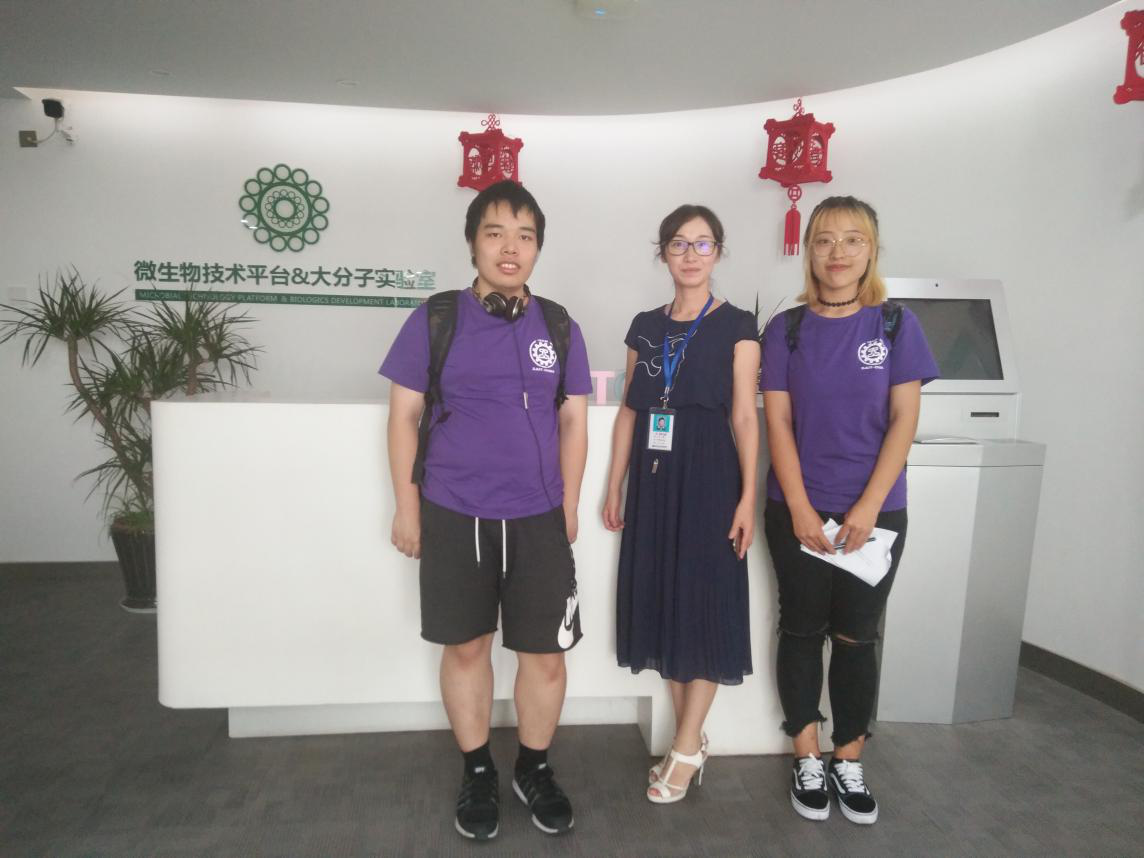 
Through online and offline surveys, we engage people in our projects. They are also involved in understanding the main goals of our project. They are also involved in gaining some knowledge of antibiotic resistance gene contamination. Public participation makes us feel that our project is very meaningful, which gives us great encouragement. During the survey, we learned about the current public perception of bacterial resistance and our projects. This is instructive for the next step of the project. The following two questions have a profound impact on our project.

Question 6: What is your attitude towards dealing with “super-resistant bacteria”? 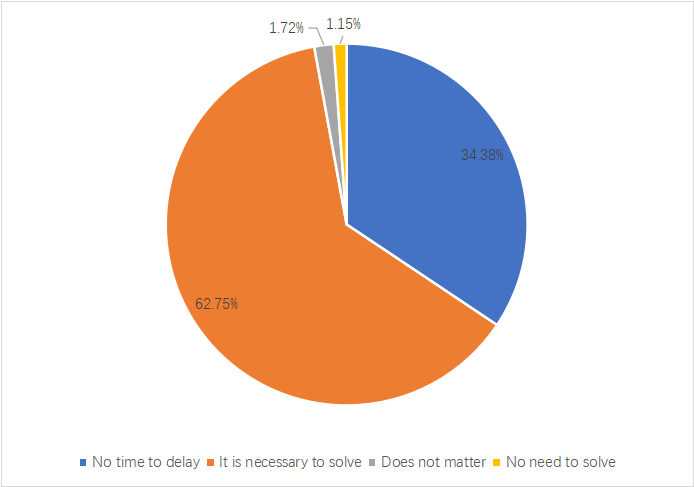 
Question 7: Which of the following production activities do you think the “drug-resistant bacteria” mentioned above are mainly generated? 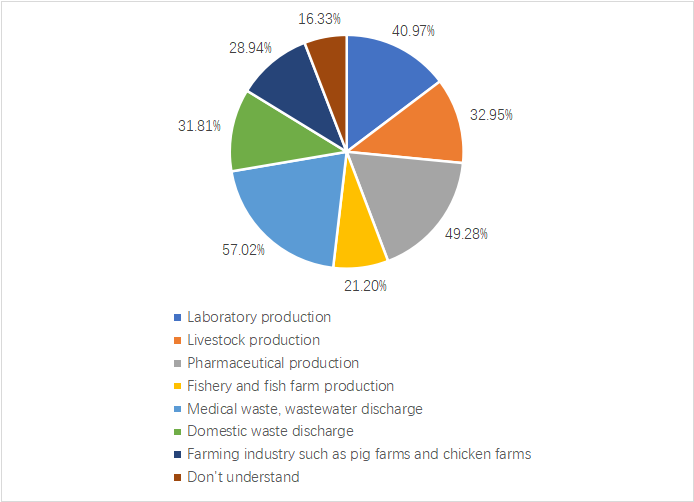 We are supported by the Chinese Academy of Engineering！ 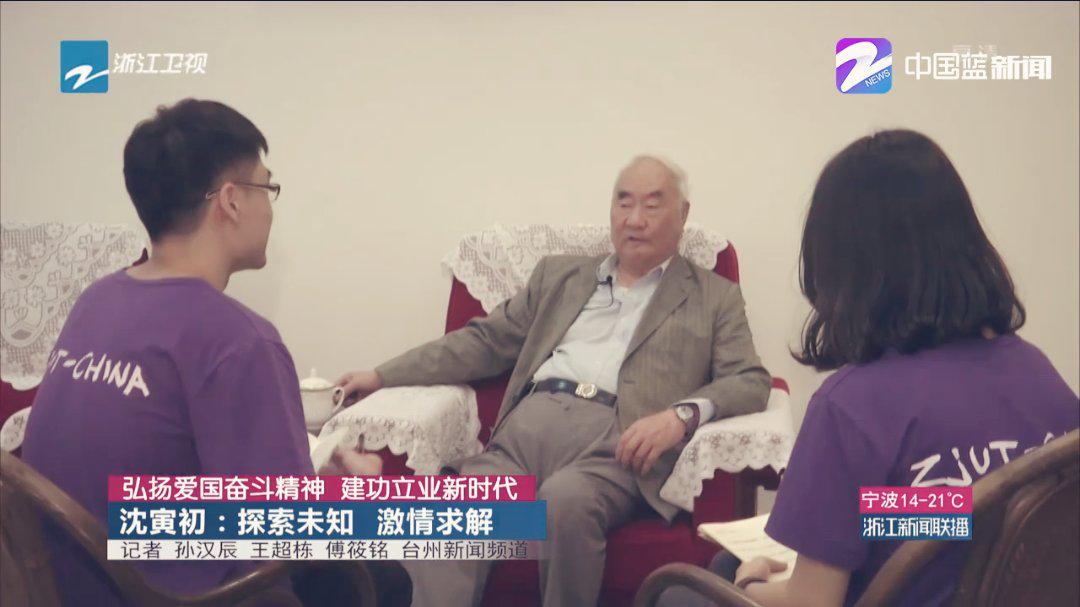 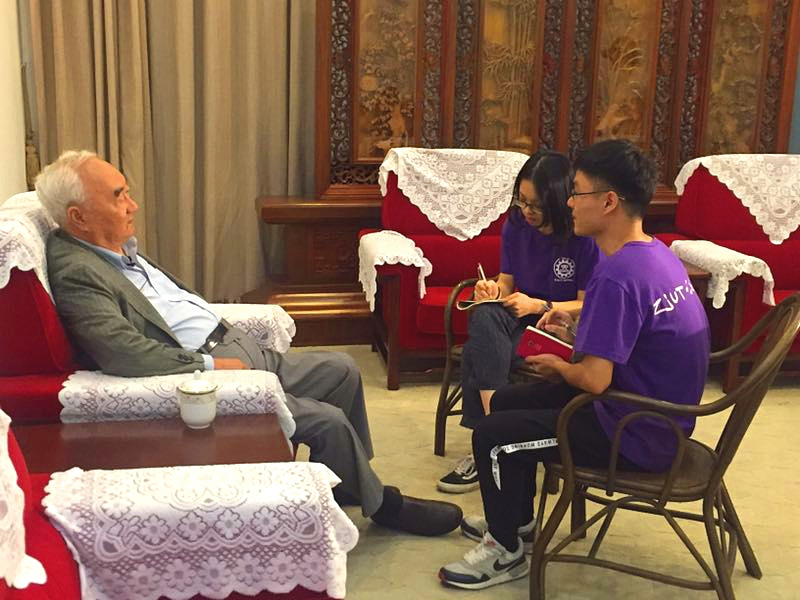 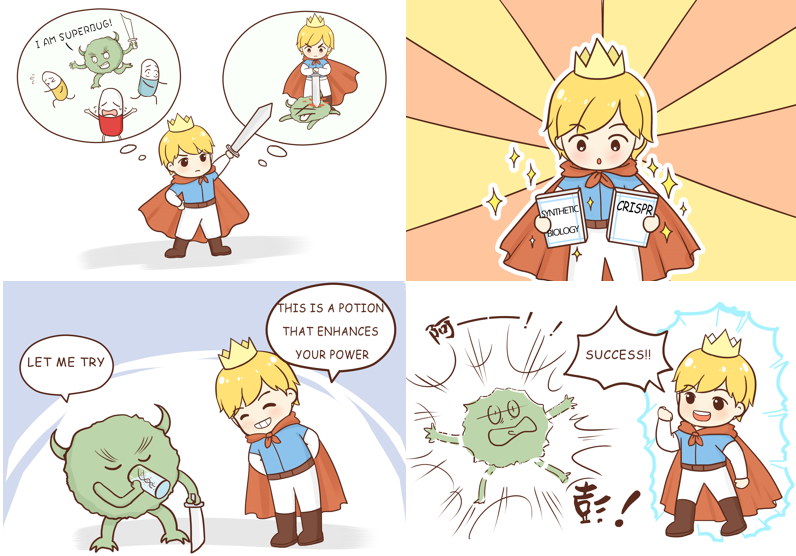 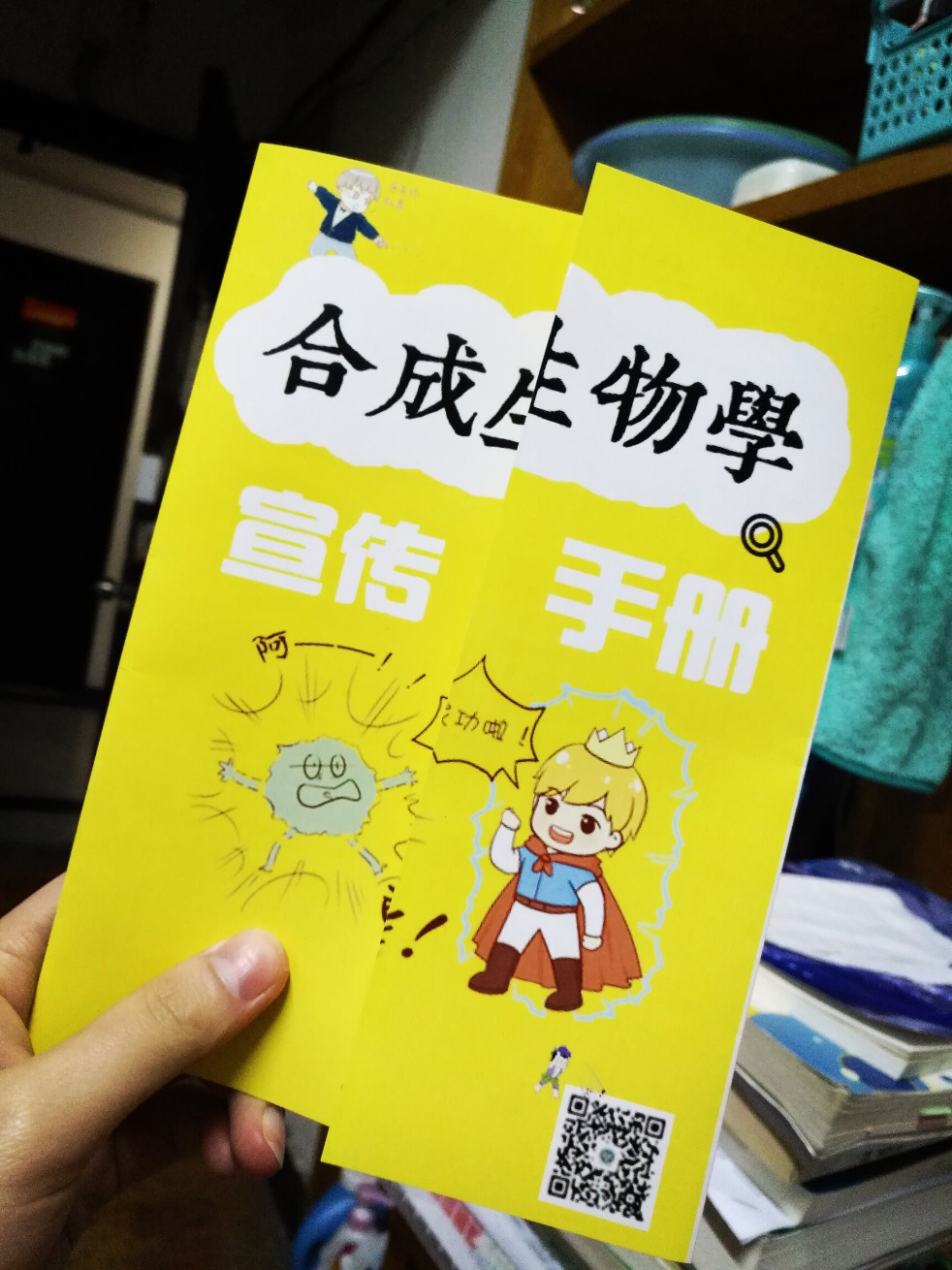 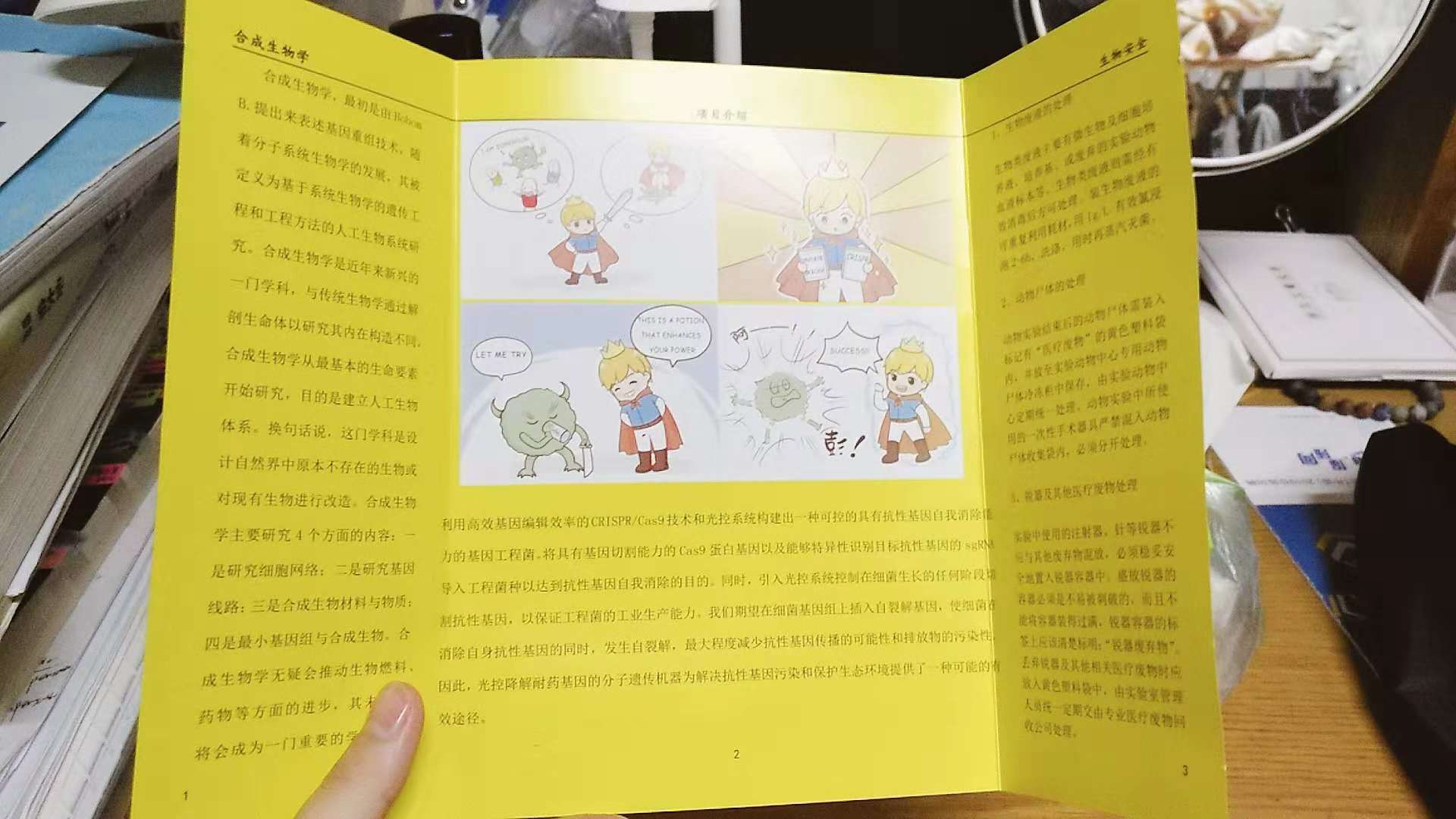 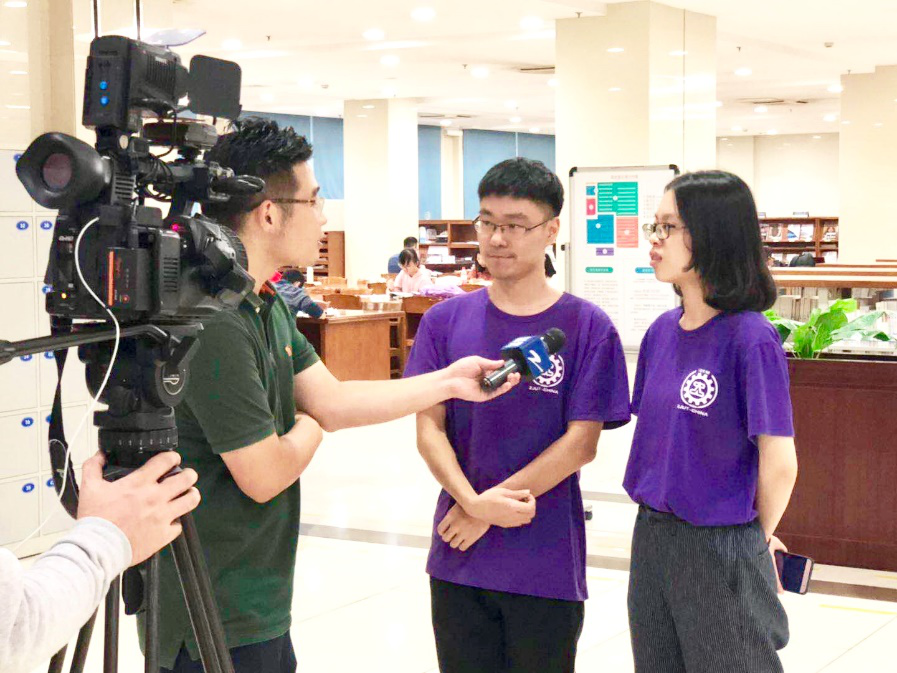 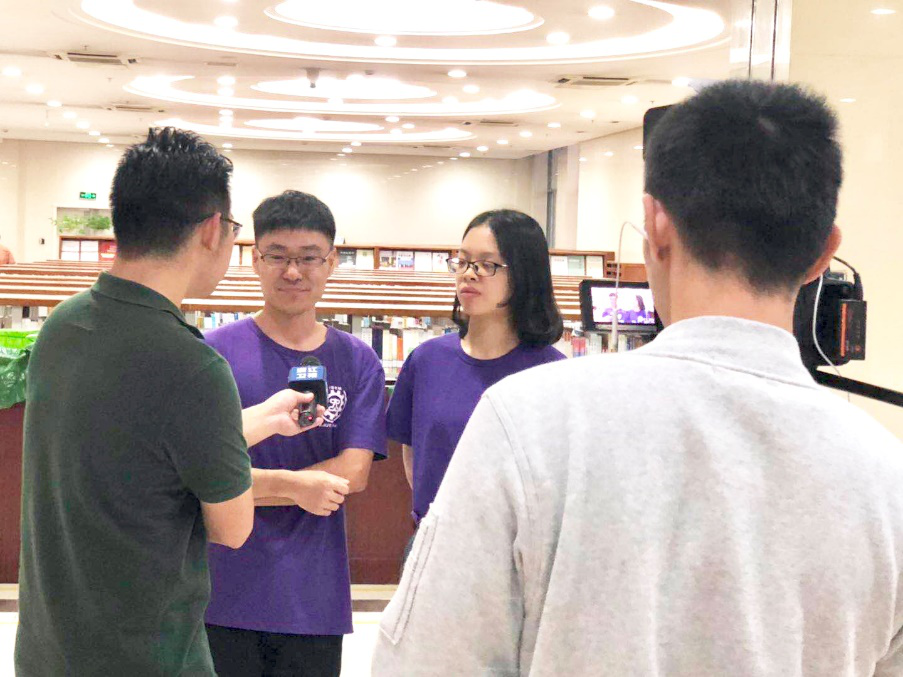 We were unexpectedly interviewed by TV stations. Zhejiang Satellite TV, the full name of the Zhejiang Radio and Television Group satellite TV channel, is the integrated satellite TV channel of Zhejiang Radio and Television Group, which was broadcasted on October 1, 1960. After listening to our project introduction and project background, they thought that bacterial resistance is an environmental pollution problem that the public ignored. They are very interested. They hope that we can introduce them in detail to attract the public. Pay attention to the issue of bacterial resistance. Then we saw our interview in Zhejiang Satellite TV. I hope that through the media, our project can arouse the public's attention to this issue.

In order to meet the needs of more people, we applied to the school this year to open a public elective course on the basis of molecular genetic machine engineering design, which allows college students interested in synthetic biology to independently learn the knowledge related to synthetic biology, we have provided A platform that can learn the knowledge of synthetic biology, we are pleasantly surprised that the class was full, and in addition, we introduced the igem competition, these college students showed a very strong interest and enthusiasm. 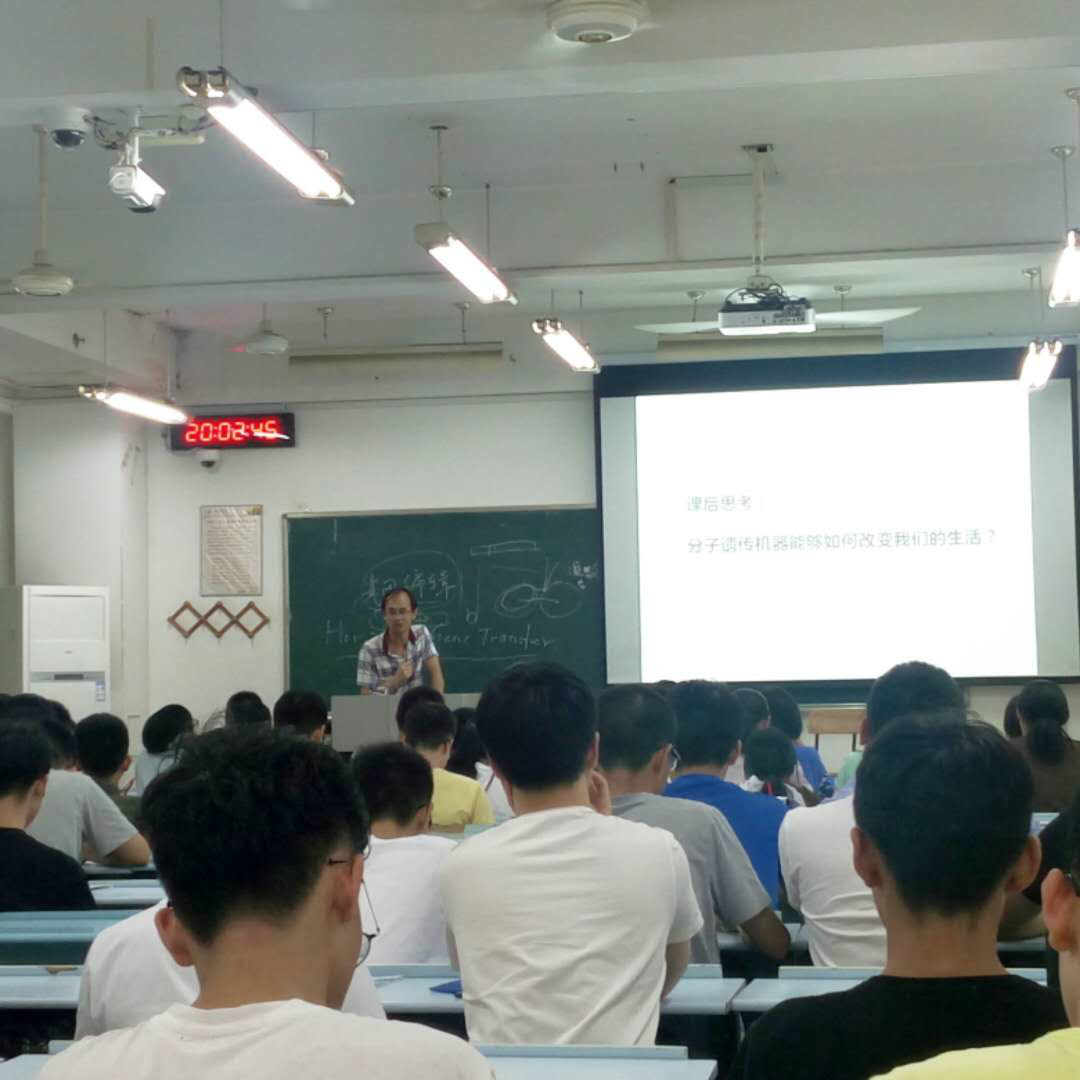 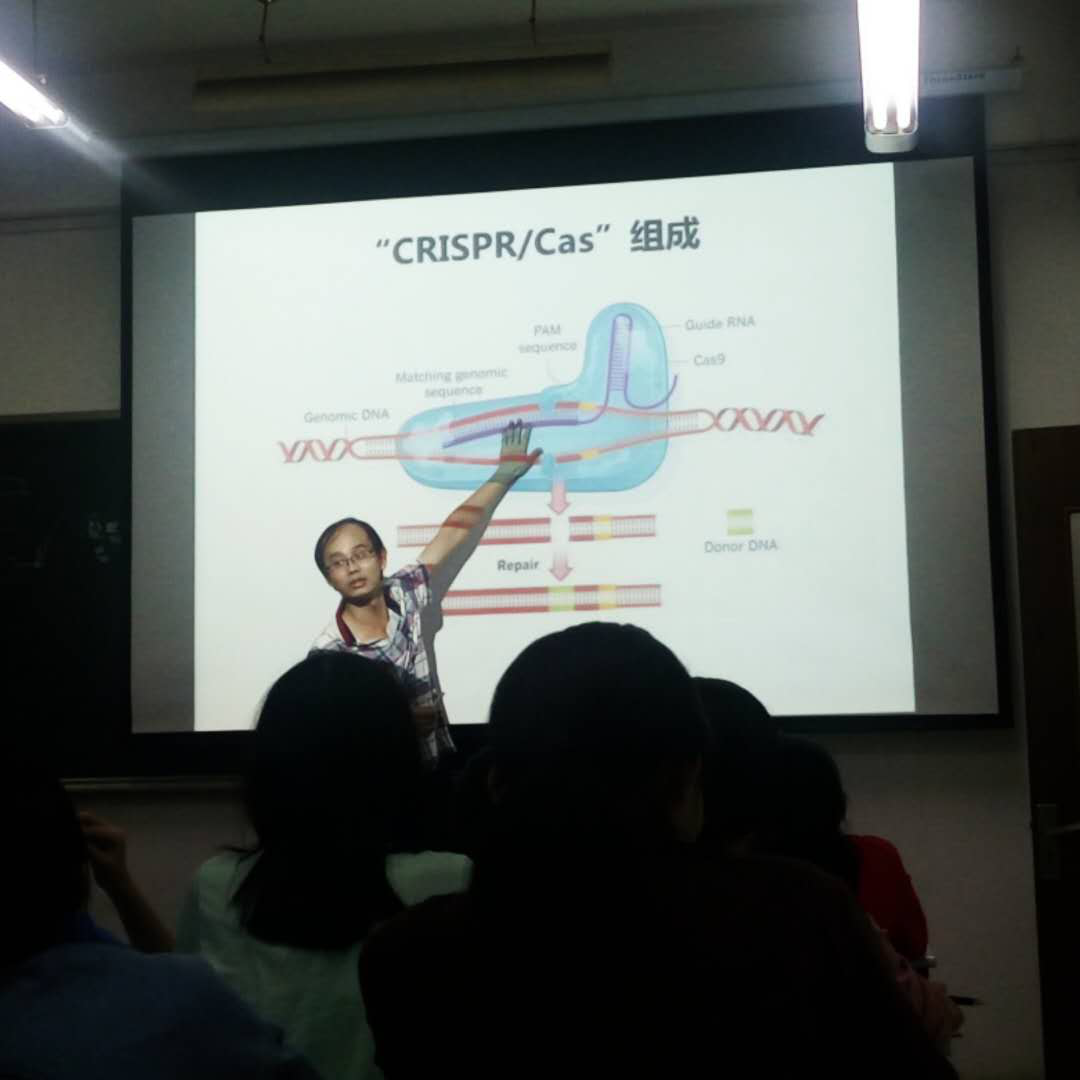 WeChat is a popular social software in China for communication by mobile phone. Some middle-aged and elderly people in China don't always believe in rumors. In order to disseminate scientific and technological knowledge to them, some scientific and reasonable views have been disseminated to prevent the elderly from being misled by rumors. We created two WeChat rumors, including bacterial resistance and GM food safety; and were promoted and forwarded in a circle of friends. Finally, we have received a lot of praise and received a lot of attention. Through our promotion, middle-aged and elderly people understand the truth behind more rumors and are no longer easily misled by rumors. It is hoped that this will enable older people to understand biology more deeply, so that the elderly are no longer misled by rumors and hope to promote public attention to biology. 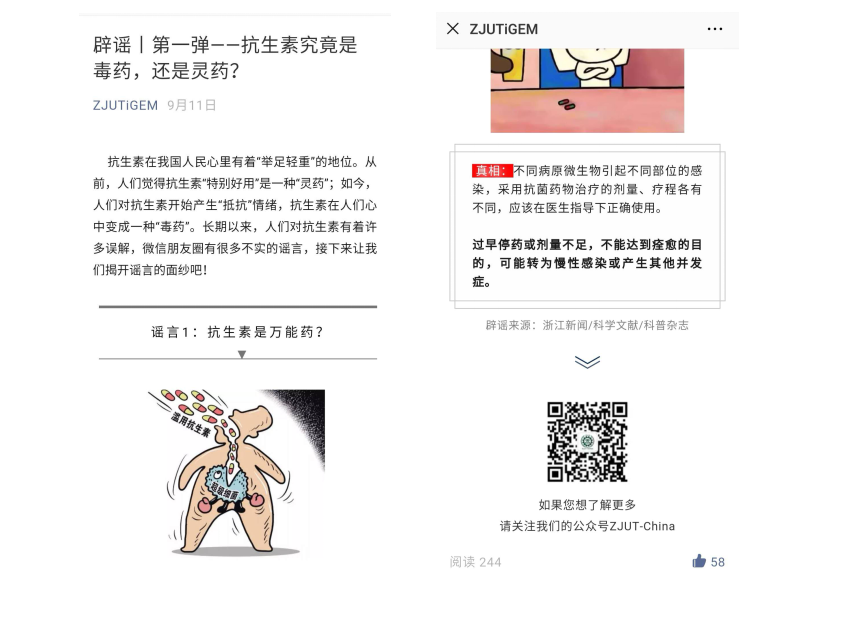 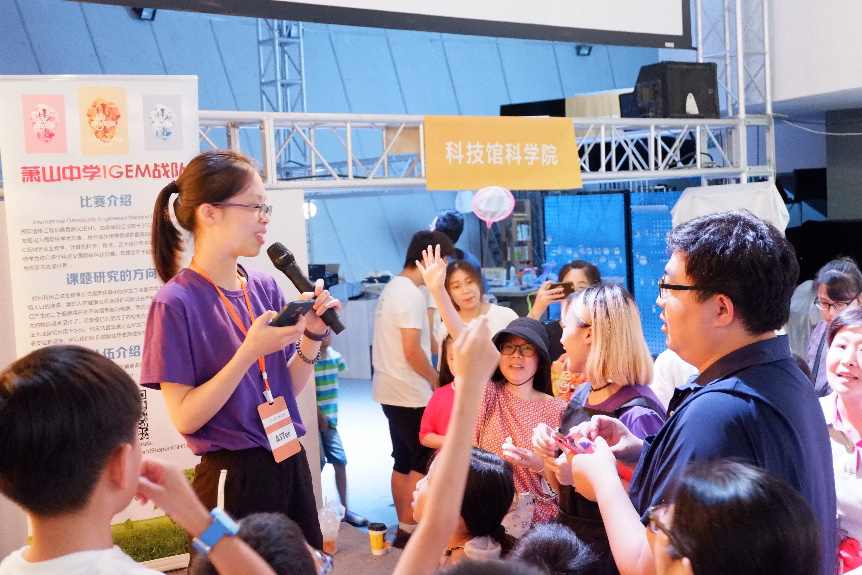 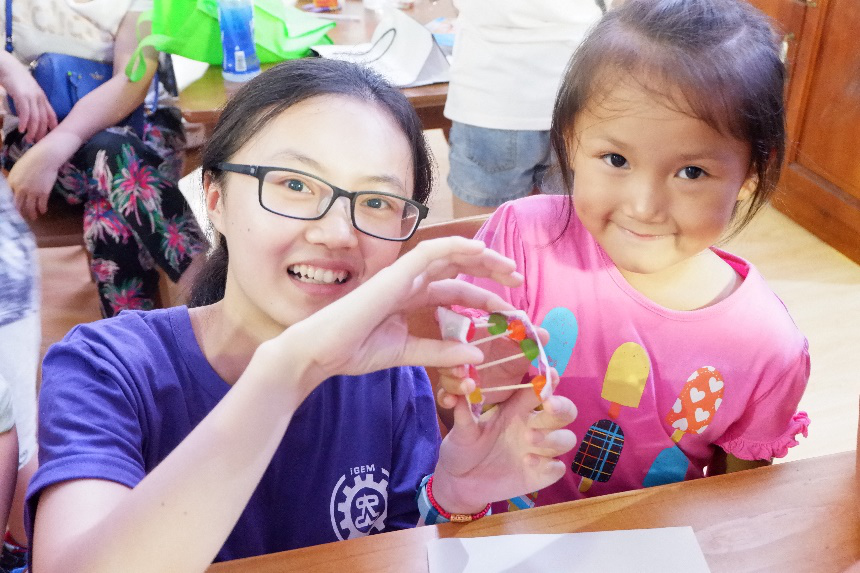 In order to promote the popularization of synthetic biology and arouse public interest in synthetic biology, we have jointly planned the 2018 Zhejiang Shengxi Science and Technology Festival with six schools including Zhejiang University and Zhejiang Science and Technology Association. In this activity, our team prepared two small games to let children know more about biology. In addition, some children participated in the game boards produced after our activities to gain a deeper understanding of these biological knowledge. We also prepared lectures on project promotion and the spread of synthetic biology. All the children in the audience listened carefully and enthusiastically answered our questions. Therefore, we will learn from the experience of this event and do better in the next HP promotion.

Young scholars in the field of synthetic biology 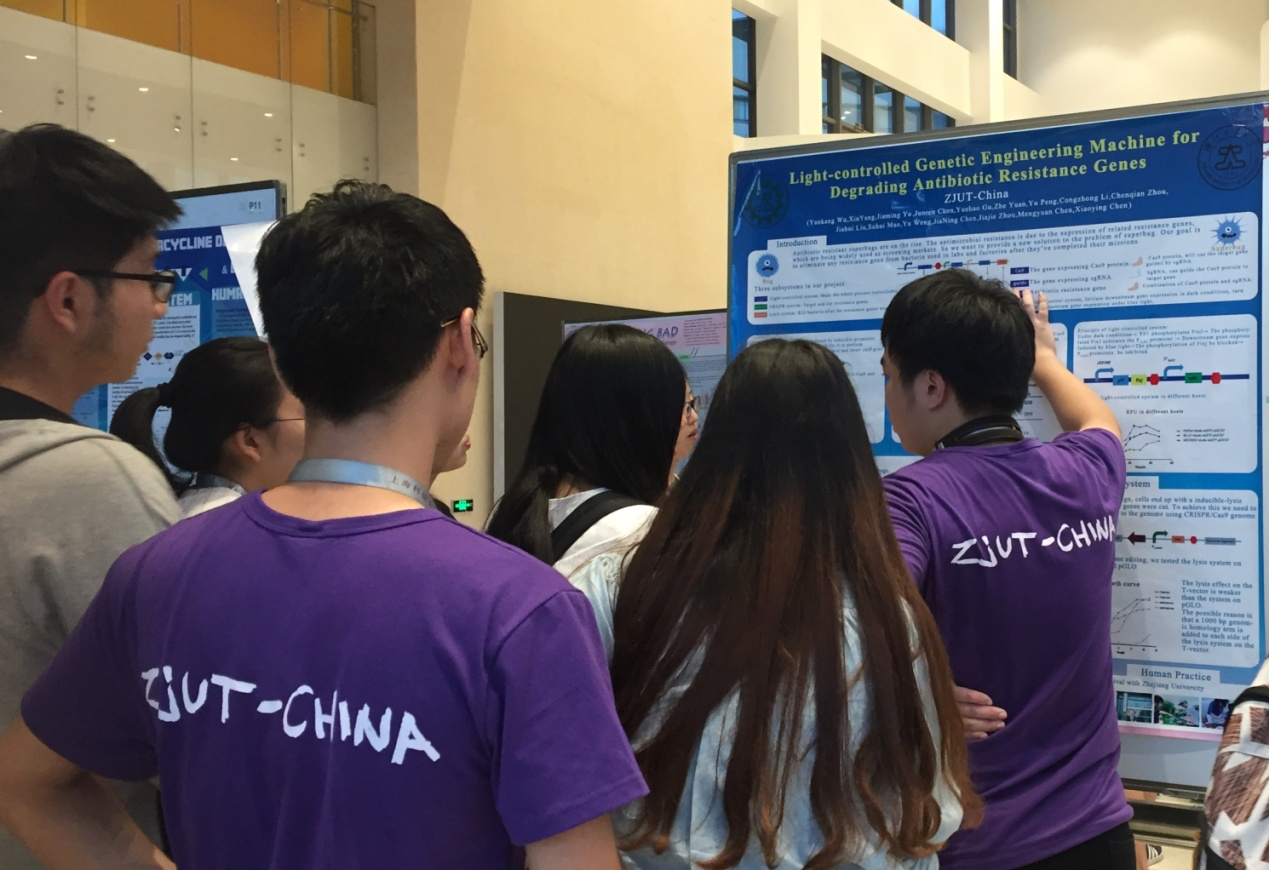 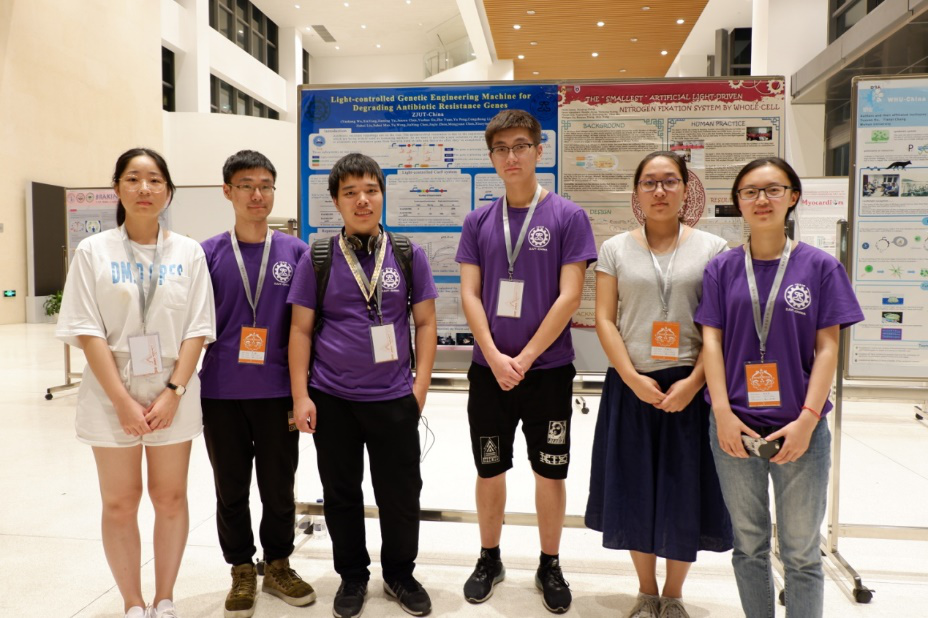 This summer, the 5th Conference of China iGEMer Community(CCiC) was held at ShanghaiTech University. More than 60 IGEM teams shared their research and experience in Shanghai. We shared the main content and project experience of this year's team project. In addition, we also displayed posters in the lobby of the School of Life Sciences of ShanghaiTech University, and further exchanged with other team members. Many of the suggestions we received from other teams were very valuable, so we went back to further improve the design and adjust the next step; in addition, we worked closely with Jiangnan China and ECUST because our project modules are suitable for them. 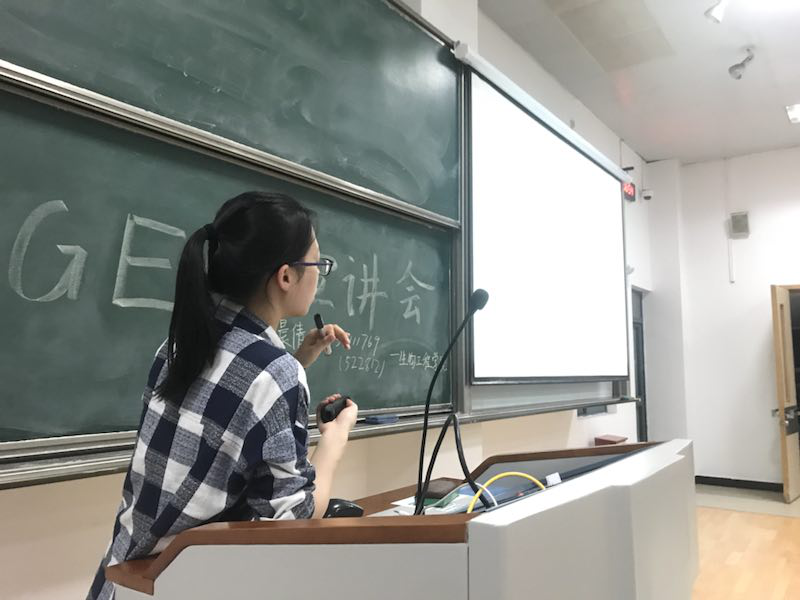 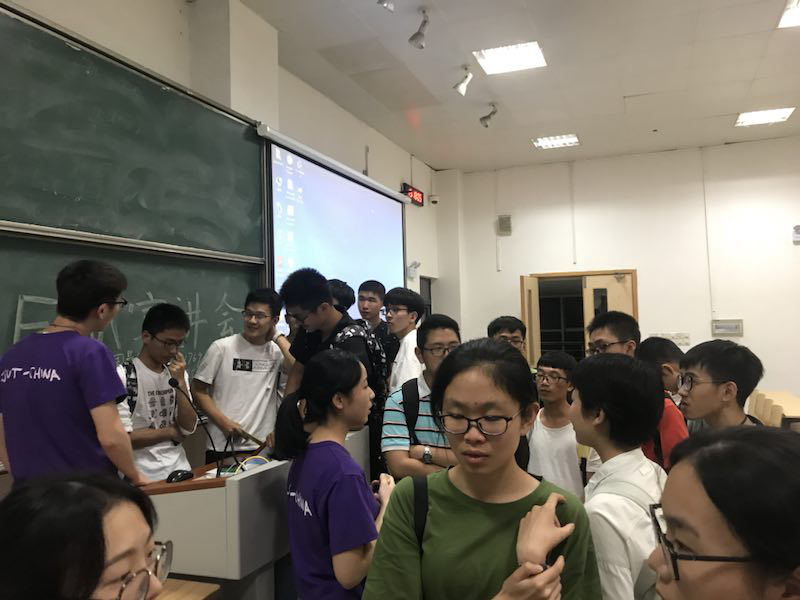 The small biology class from igemers was held in Jiangjiatoutou Village, Xiwu Street, Fenghua District, Ningbo. The village committee really welcomes and supports us. First, what do we share with children? How did humans develop? Arouse children's curiosity and doubts about biology. In turn, we developed genetic concepts that extend to synthetic biology. Here, we interspersed with an explanation of the benefits and principles of antibiotic use. After listening to our lectures, the students showed great interest. They made a lot of questions about what we said and some new ideas that surprised us. 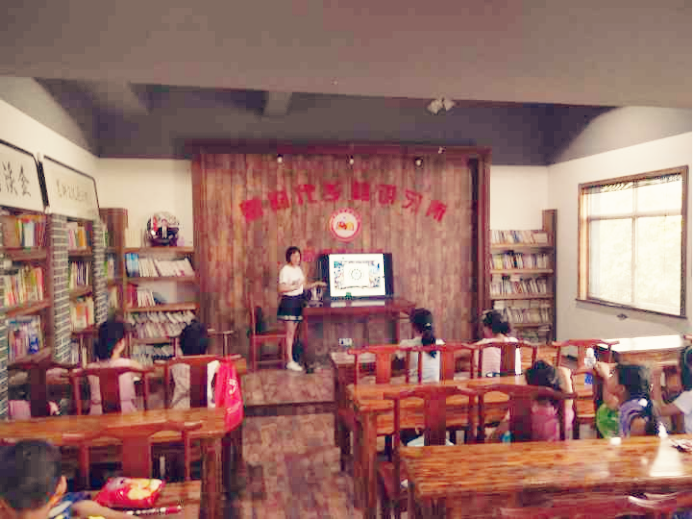