I. Detection of C4-HSL in Aeromonas Hydrophila Culture 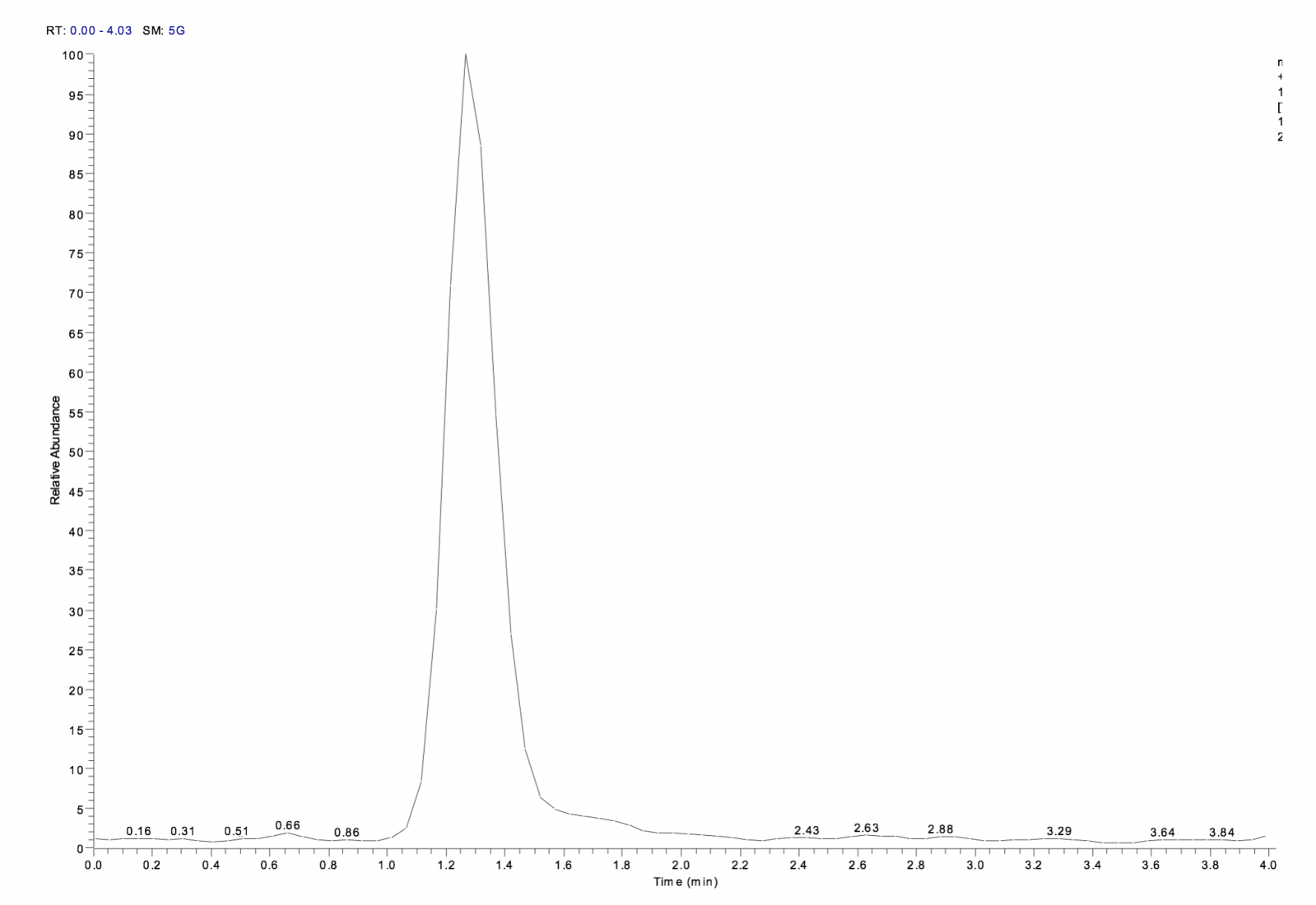 We plotted the peak areas of standard solutions and found the line of best fit which describes the relationship between peak area and C4-HSL concentration. The derived equation is: 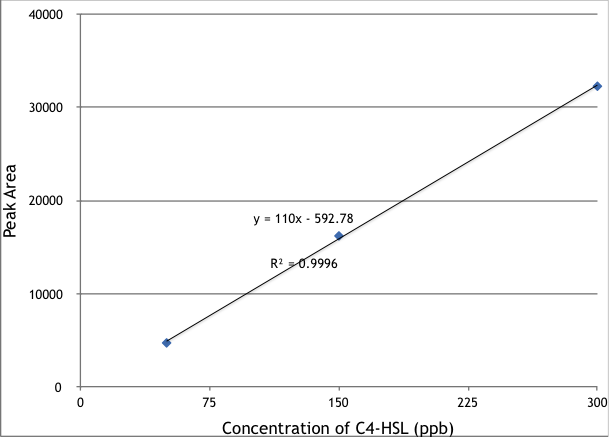 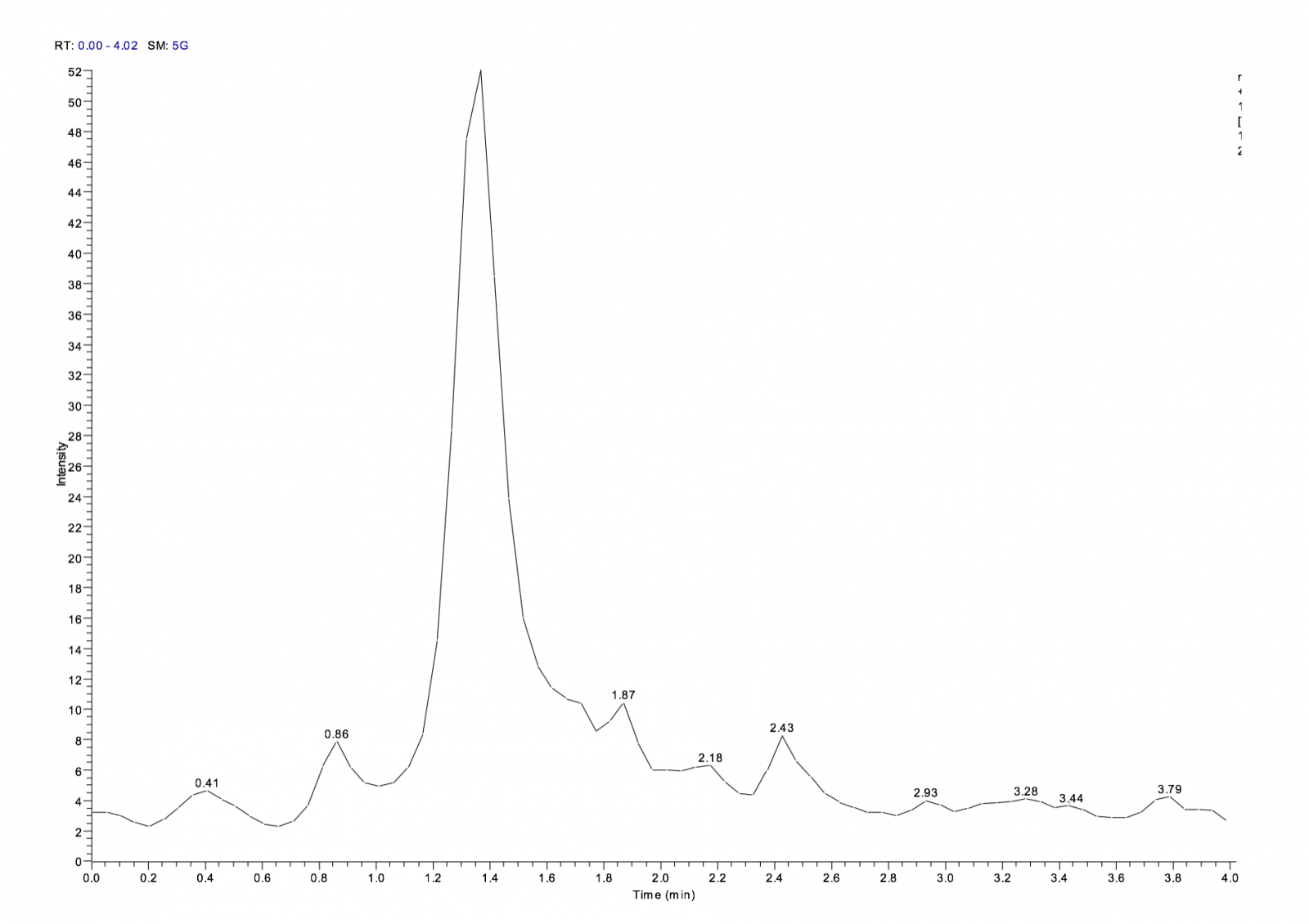 can be calculated by the derived function:

However, when we compared the GFP production rate of Sensor Device I at different concentrations of C4-HSL, we found its fluorescence in the environment of fish feces might be too low, since the difference between GFP production rate at 0 M and 9.90E-8 M of C4-HSL was only 12.4%, implying that the device cannot tell people whether the fish is infected with A. hydrophila effectively. 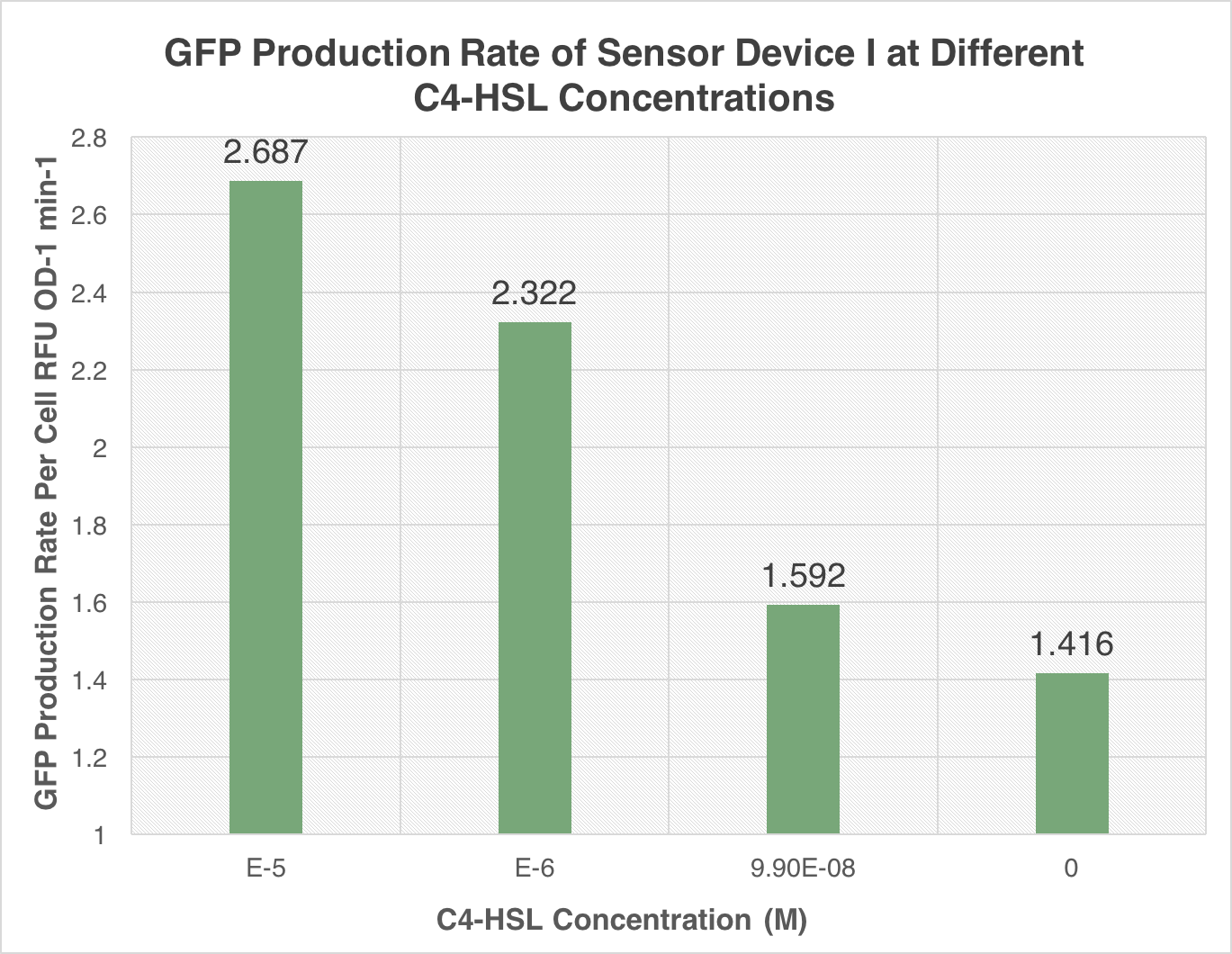 III. Problems with Sensor Device I

To make the sensor workable in real environment, we intended to increase the difference between the device’s GFP production rates at 9.90E-8 M and 0 M of C4-HSL, but we didn’t know how to achieve it, since we thought the RBS we used (BBa_B0034) for GFP and RhlR expression was already the strongest and cannot be changed. Thus, we consulted Mr. Yihao Zhang from Peking University, and he pointed out our mistake: the strength of RBS can be influenced by the upstream and downstream DNA sequence, so we needed to use RBS calculator to determine the exact strength of the two RBSs in sensor device I. Following his advice, we examined our device on salislab.net, and found the RBS strength ratio of rhlR (LVA-tagged) and GFP was 1:5, indicating that the expression level of RhlR might be too low to repress and activate the expression of GFP in a desired level. Hence, we decided to improve the strength of RBS for rhlR (LVA-tagged).

By using RBS calculator, we derived a new RBS sequence for rhlR (LVA-tagged), which had 5 times of strength compared with the RBS used in sensor device I. We performed C4-HSL induction experiment again, and modelled the time-averaged GFP production rate with Hill Equation (see model). We calculated the GFP production rate of device II at 9.90E-8 M of C4-HSL by the derived equation:

The figure below shows sensor device II’s GFP production rates at different concentrations of C4-HSL. However, the difference between the production rates at 0 M and 9.90E-8 M was still not significant (12.2%), and the rate at 0 M did not decrease as expected. 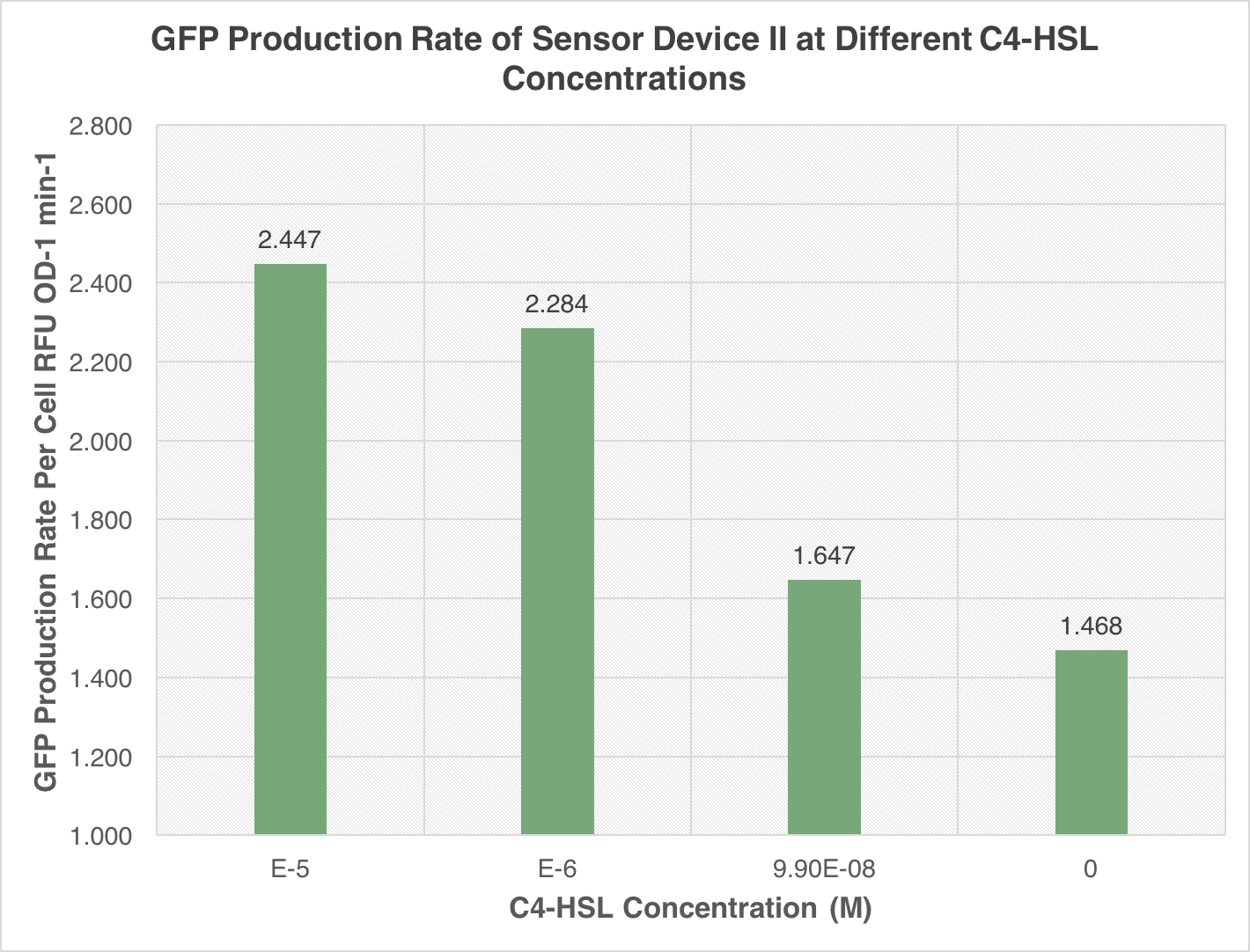 We were confused with the result and discussed it with Mr. Yihao Zhang again. He explained that the device displayed fluorescence when there was no induction because the interaction between promoter and RhlR has reached equilibrium and cannot be altered by changing the RBS strength. Thus, we asked Mr. Zhang if there is any method to increase the difference between GFP production rates at 9.9E-8 M and 0M of C4-HSL. Based on the dual-mode nature of RhlR, Mr. Zhang suggested us to increase the RBS strength for rhlR (LVA-tagged) in a large scale (from 10 times of original strength to 100 times), so the cooperativity between RhlR and C4-HSL can be improved, enabling more GFP to be expressed at low inducer concentration. 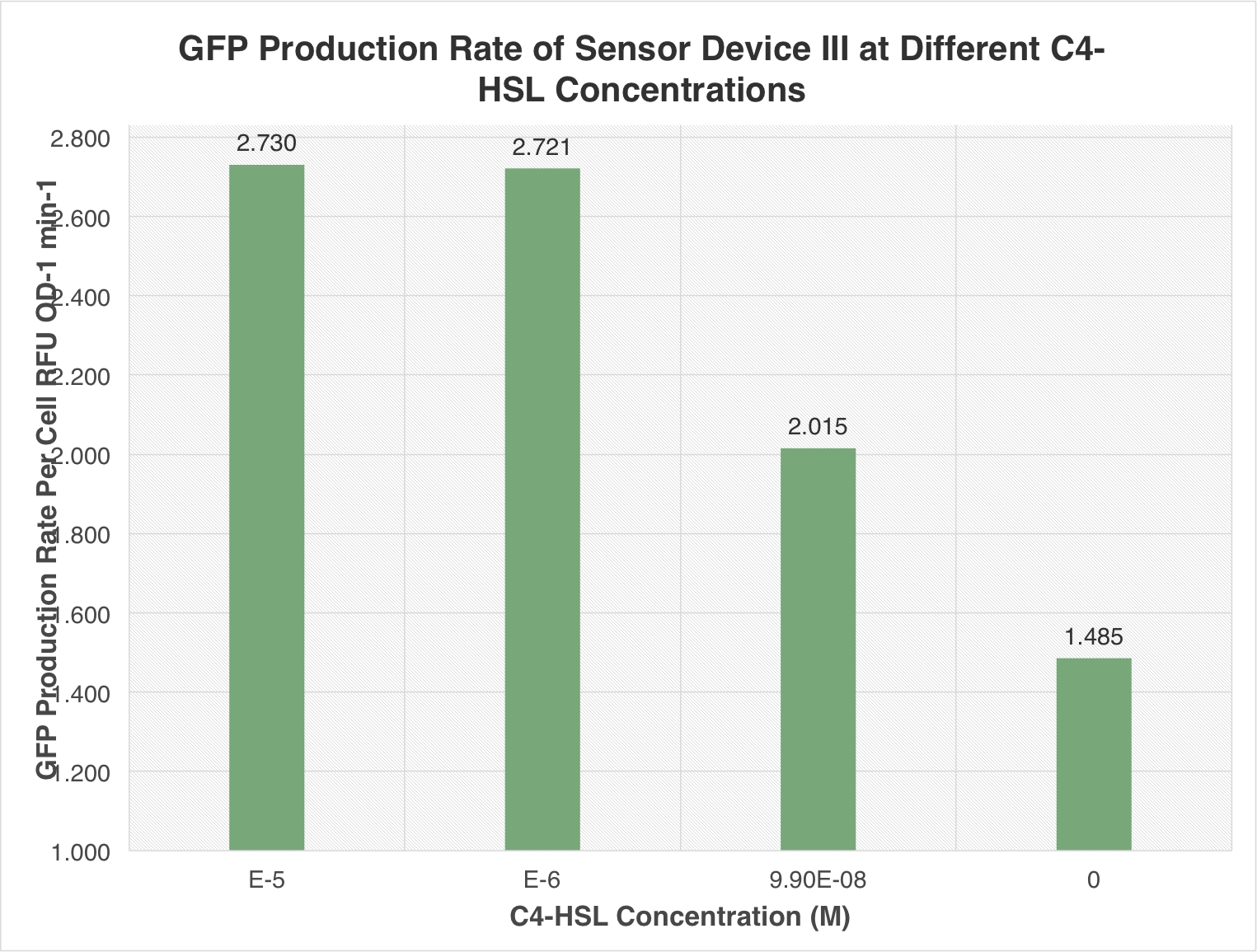 This time, the difference between GFP production rate at 0 M and 9.90E-8 M of C4-HSL reached 35.7% of the expression level without induction, enabling people to detect A. hydrophila more easily from fish feces by using fluorescence detector. Moreover, as Mr. Zhang predicted before, the cooperativity between RhlR and C4-HSL was improved. Figure x. shows the modelling results of the three sensor devices. The slope of device III is the steepest one, and the Hill coefficient of the function, which describes the cooperativity between inducer and RhlR, increased from 1.154 in device I to 2.250 in this device. 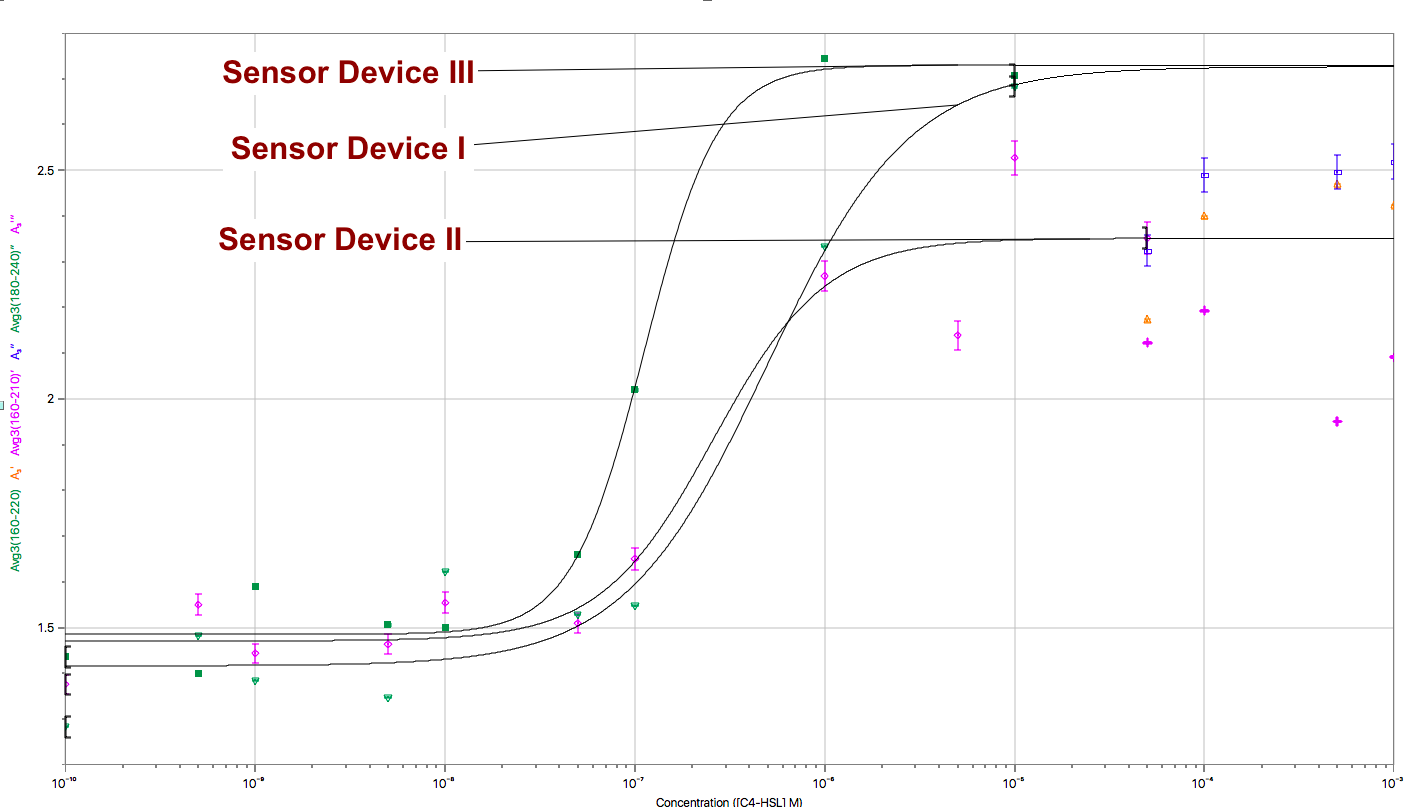 We did the experiment XIX to test the quorum quenching ability of QQ Device I (BBa_K2548000 + BBa_K2548006) and QQ Device II (BBa_K2548000 + BBa_K2548007), and the result is shown below. E. coli DH5a transformed with sensor device I was induced for 3 hours in the supernatant of cells containing empty RPG plasmid, QQ device I, and QQ device II after they were induced by C4-HSL for 4 hours. In Fig 8., the control group with empty RPG plasmid shows higher GFP concentration than the culture of QQ device I and QQ device II, indicating that C4-HSL was consumed by the two devices. The GFP concentrations reduced 18.5% and 20.9% for device I and device II compared with control group respectively, implying that QQ device I had better C4-HSL degradation ability. 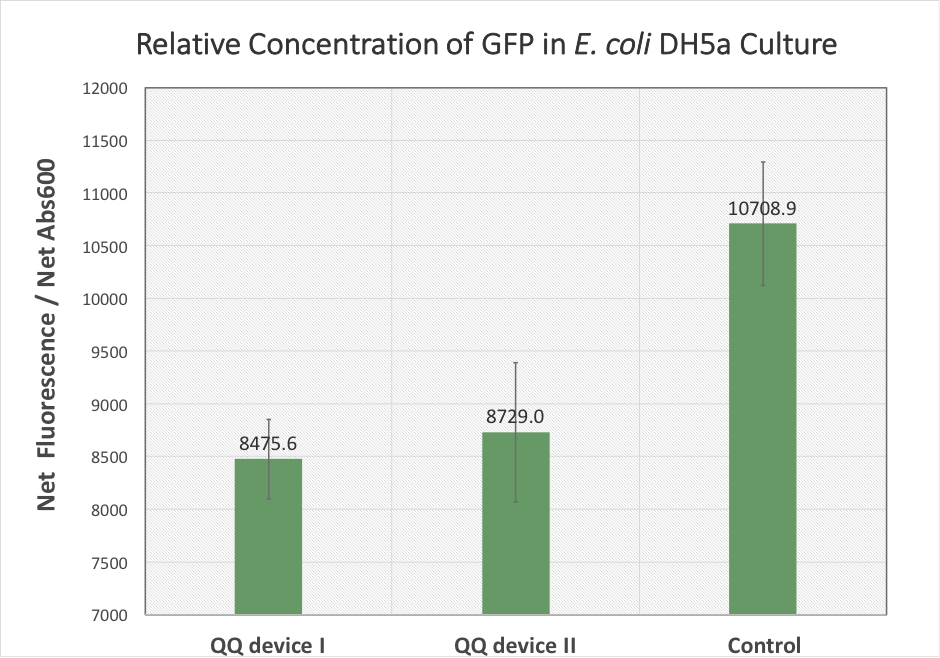 We examined the length of protein we extracted by performing SDS-PAGE to the supernatant after ultrasonic lysis. The protein size of SCY is 12.54 kDa, 11.54 kDa for cPcAMP1, and 12.74 kDa for spALF4. Protein bands in the correct molecular weight range were visualized in the area between 15 kDa and 10 kDa. There was no protein band in the same area for control group, indicating that the three AMPs were expressed. 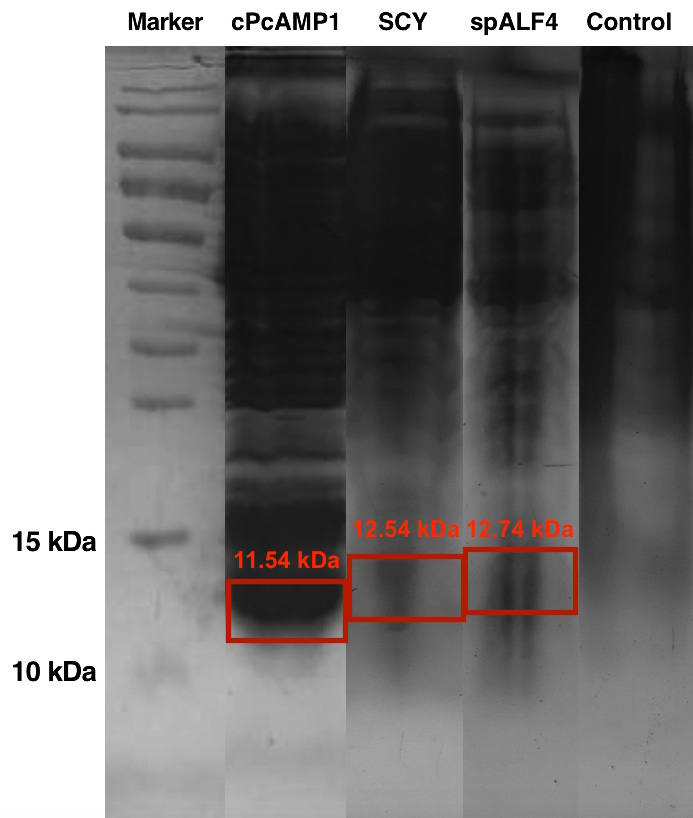 We tested the effect of different antimicrobial peptides through the procedures described in Experiments. The photos below show Aeromonas hydrophila under electron microscope. 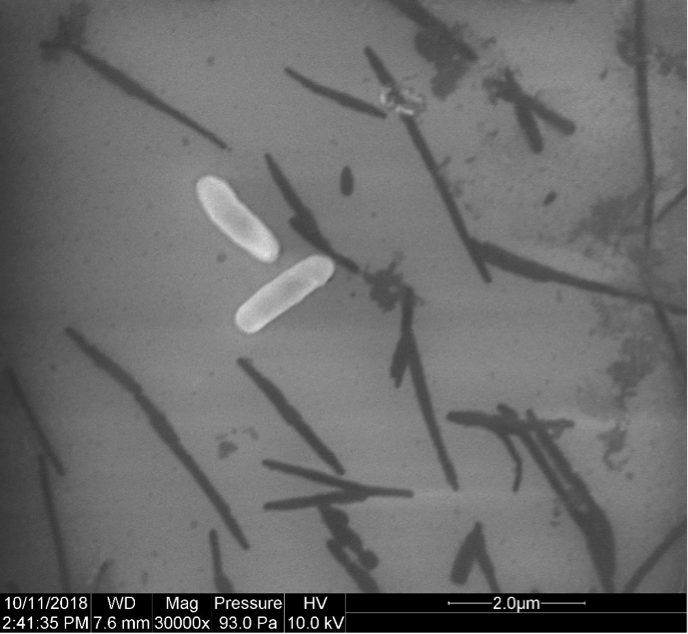 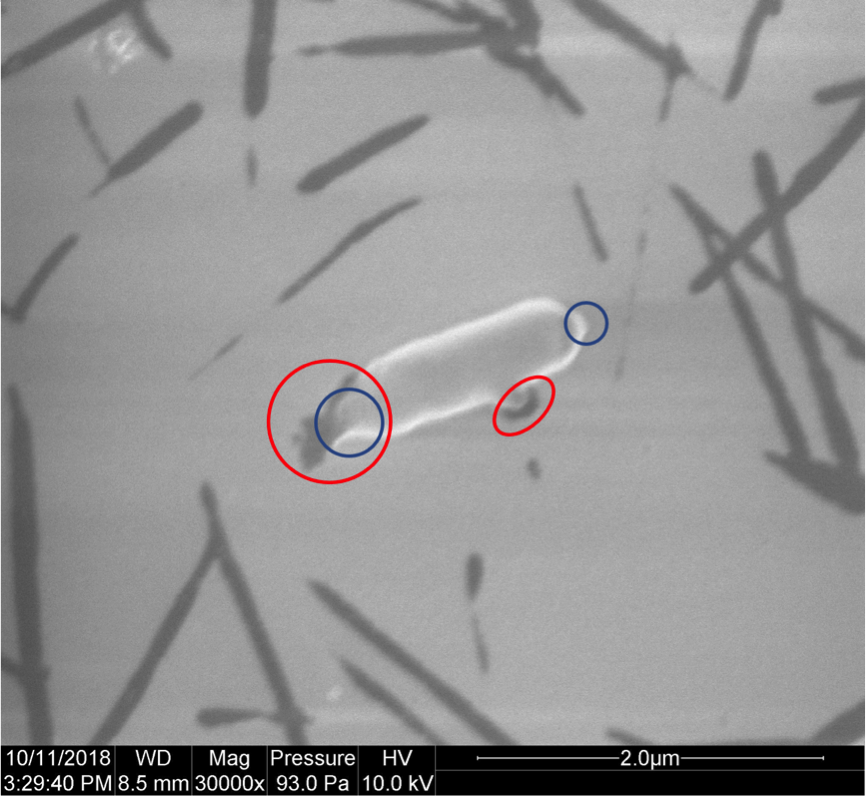 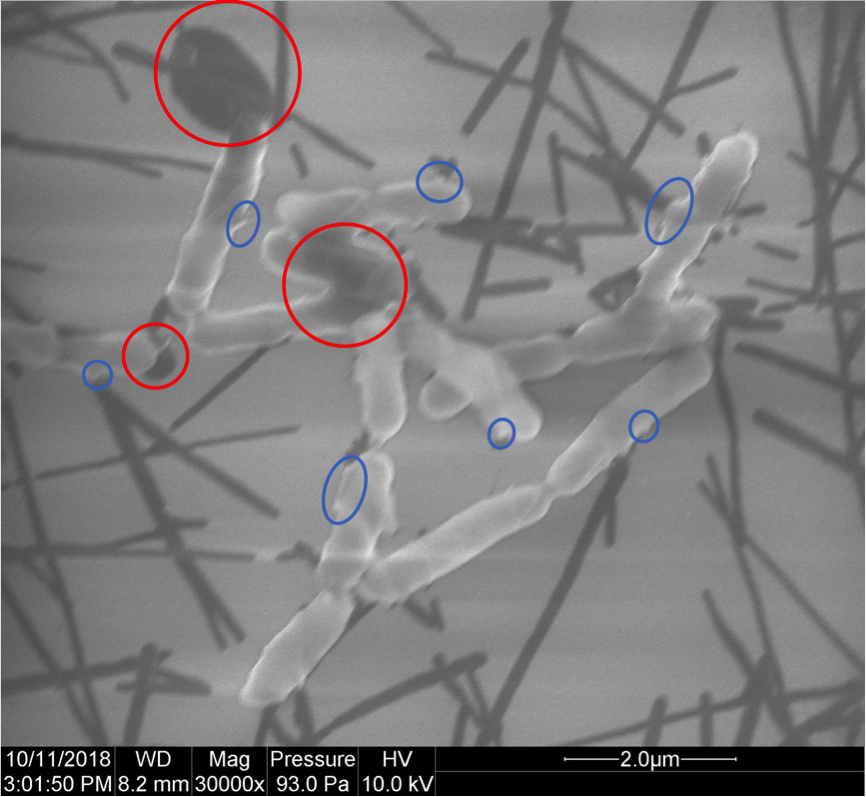 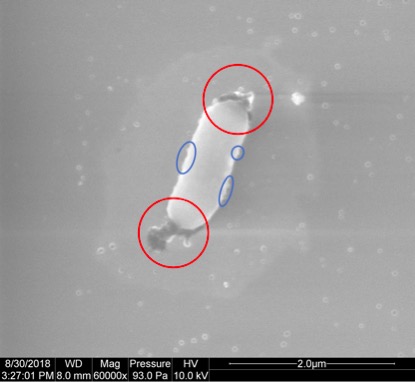 Figure 10 to figure 13 show a group of broken A. hydrophila that has been processed by AMPs. The edges of the cells are clearly rougher than those of cells in the control group, with some obvious light leaves as circled in blue. We suppose the darkened parts among and besides the cells (circled in red) are the cell structures flowed out of the cell via the gaps on cell walls.

Through the electron microscope photos, we could demonstrate that our AMP solution caused damage on cell walls of A. hydrophila.

1. Increase the RBS strength for rhlR (LVA-tagged) to improve cooperativity between C4-HSL and RhlR, enabling our sensor device to detect even lower concentration of A. hydrophila and avoid infection more effectively.

2.Change the strength of two RBSs in quorum quenching devices and make the expression of lactonase more sensitive at low C4-HSL concentration.

3. Construct the antimicrobial releasing devices as described in design , so the expressed AMPs can be released in fish intestine and kill A. hydrophila directly.

4. Use OmpA signal peptide to secrete AMPs out of cell (Pechsrichuang).

6. Put the three devices into fish probiotics like E. coli K12 MG1655, so the killer can colonize in the fish intestine and protect the health of fish for a longer time.