In order to demonstrate the versatility of electroporators, the underlying mechanism allowing their functioning must first be described. Cell membranes comprise of a combination of proteins, lipids, carbohydrates, and other macromolecule-based structures arranged into a bilayer formation providing a selectively permeable barrier to protect the cell and facilitate the transport of molecules into and out of the cell, thereby reducing the potential for molecules to freely diffuse into a cell [1]. This theory of the organization of the cell membrane in the formation of a phospholipid bilayer was characterized by Singer and Nicholson and named the “fluid mosaic model”, and the mosaic properties were further characterized as dominant to the fluidic properties [2]. Electroporation results in a disruption of membrane integrity [3-5], and the subsequent events following electrical discharge allow for membrane permeabilization [5-12]. While the actual molecular occurrences caused by electroporation that allow for DNA uptake are relatively unknown, experimental trials have indicated that interaction between the electrical fields and phospholipids result in the creation of aqueous pores in the membrane [13-15], high-voltage pulses stimulate a reorganization in the ions resulting in a new transmembrane voltage producing a local electrical field. These local electrical fields are theorized to lead to the formation of the aforementioned aqueous pores, allowing for the transport of molecules into a cell [16]. The totality of these sequence of events contribute to the uptake of DNA by cells in the processes of bacterial electrotransformations, but additionally function in cellular uptake for the other outlined applications of electroporation.

The observation of the effects of electrical pulses on living organisms can be traced back to the late 1700s when German physicist Georg Christoph Lichtenberg described branched structures that form when high-voltage electrical pulses are induced on human skin, which are now referred to as Lichtenberg Figures [17]. Over 200 years later, it was demonstrated that high-voltage pulses greatly increased the number of transfected cells, leading to the coinage of the term “electroporation”, based on the theory that these pulses induced temporary membrane disruptions allowing for DNA uptake [18]. Over the past decade, electroporation has been increasingly characterized in terms of its electrical and biological functionality, with elements such as field strength, voltage output, arc length, transformation efficiency, etc, leading to more advanced technology utilized to carry out the process. Additionally, an increase in the theoretical understanding behind electroporation’s principles has expanded its applications tremendously, including for cancer therapies through electrochemotherapy and electrically-induced tumor apoptosis, transdermal drug delivery, vaccine delivery, etc [19-22]. This versatility in terms of functionality and applicability for the electroporator indicates its importance in biotechnology and medical fields, and with the inhibitory factors mentioned above limiting its incorporation into labs, schools, and even in field biology, the need for a low-cost portable electroporator has risen greatly.

In contrast with the existing bulky and complex electroporators available commercially, the ElectroPen stems from a basic design incorporating readily available components, including a conventional household stove lighter. It is actuated using a toggle which pushes down the hammer action controlling the force generation on the piezoelectric crystal. The user exerted force allows for the hammer action to proceed through several phases (described below), allowing for discharge of the high-voltage pulse. The casing additionally allows for the attachment of copper wires to those already existing on the crystal, and heat-sensitive insulation is coated on the copper wire to prevent the user from experiencing any electrical shock. The ElectroPen thereby requires no access to electricity, can be fabricated in approximately 15 minutes, is portable, and costs only 23 cents to build (Cost per unit per 10,000 units, excluding production costs). 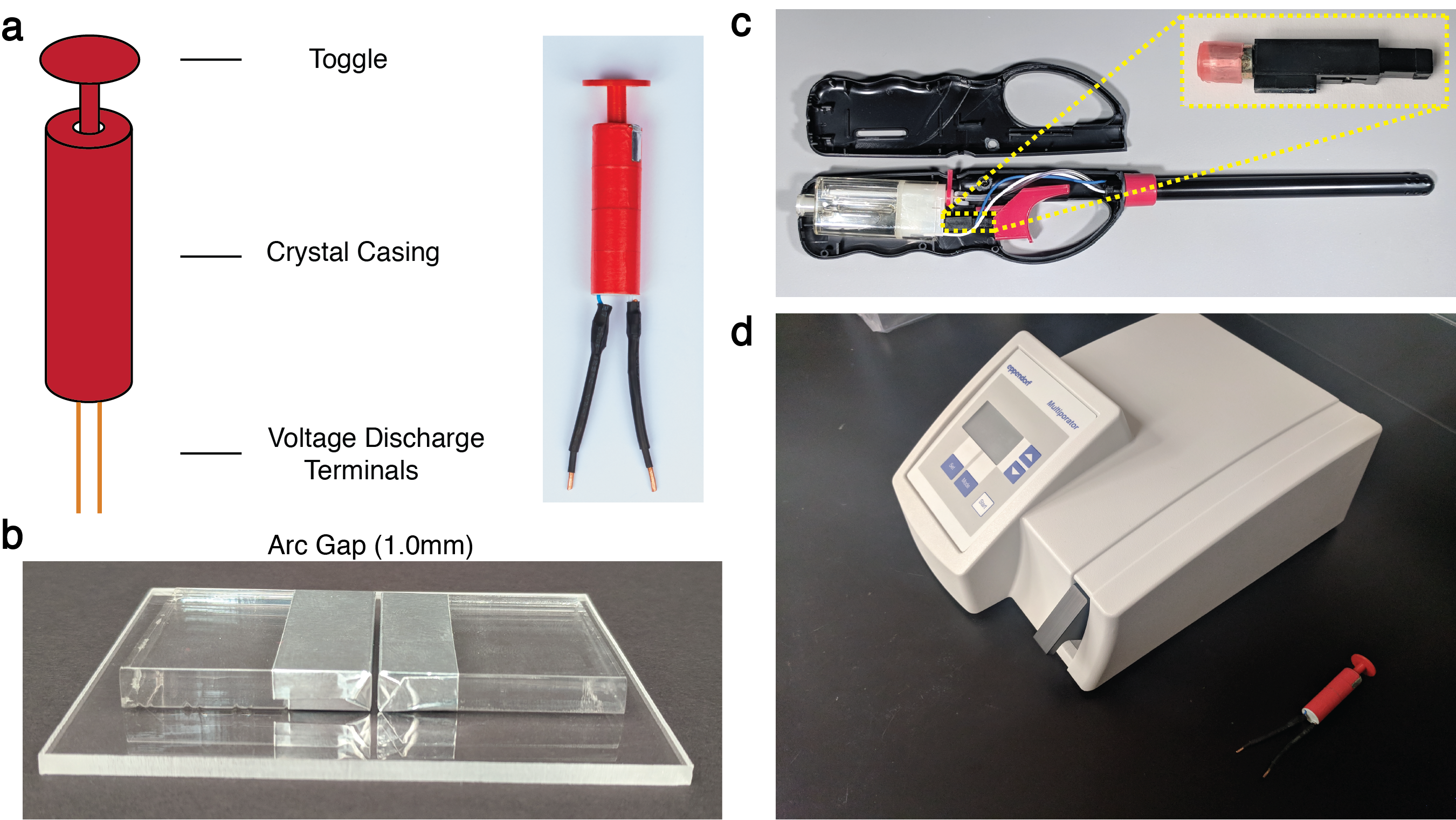 
Although standard electroporation cuvettes provided by companies have been shown to function optimally in electroporation, these cuvettes were found to not operate with the same conditions with the ElectroPen. Additionally, these standard cuvettes are relatively expensive and difficult to produce without industrial equipment. Recognizing the perceived limitations of this cuvette, we developed a custom cuvette that can be built using a wide range of materials (glass slides, wood, etc.). The design of these cuvettes models its industrial equivalents, wherein two metal plates functioning as electrodes create an arc gap in a case. In our fabricated cuvettes, two large pieces of a specific material are covered with aluminum foil and sealed to a base, with a gap created in between each piece to serve as the arc gap for electroporation. The simplicity of the overall ElectroPen and cuvette model demonstrates the application of simple tools found everywhere across the world for a unique purpose at a fraction of the cost, hence acting as a major catalyst in the development of new similar tools which don’t have the same constraints as their commercial versions.

Since the conception of electroporation, numerous systems and machines have been developed to carry out successful and efficient electroporation, in recognition of the various parameters that must be optimized [23-25], including field strength, voltage, pulse length, number of pulses, temperature, pH, ion concentration, phase of growth for harvested cells, cell density, etc. [26-27]. With respect to bacteria, the most common method involves capacitance discharge in the form of an exponentially decaying wave for electrotransformations [28-29]. The prevalence of this model is due to the simplicity of its design, with the simplest circuits including a high-voltage power supply (V), switch (S), a capacitor (C) , and often a resistor (R) for modulation of voltage outputs. It functions in two phases: a charge phase and a discharge phase, in which the former includes the power supply charging the capacitor with the switch in one position, and the latter with the switch in a different position allowing the capacitor to discharge through the load (solution) connected as an output in the circuit. The other common method utilized for electroporation includes the generation of square wave pulses, consisting of significantly shorter fall times than the exponential decay model. Square wave pulses are primarily used for electroporation of eukaryotic cells, although they have been demonstrated to successfully (and optimally) electrotransform [30]. Within the ElectroPen, the piezoelectric element described below generates exponentially decaying pulses with voltage outputs and time constants similar to the 1800V/5ms values optimized for E. coli, however, the generated pulse does not involve any of the previously described circuitry, using a piezoelectric mechanism for generation and release of the voltage rather than a traditional power supply, allowing for no necessity for access to electricity to operate the device. 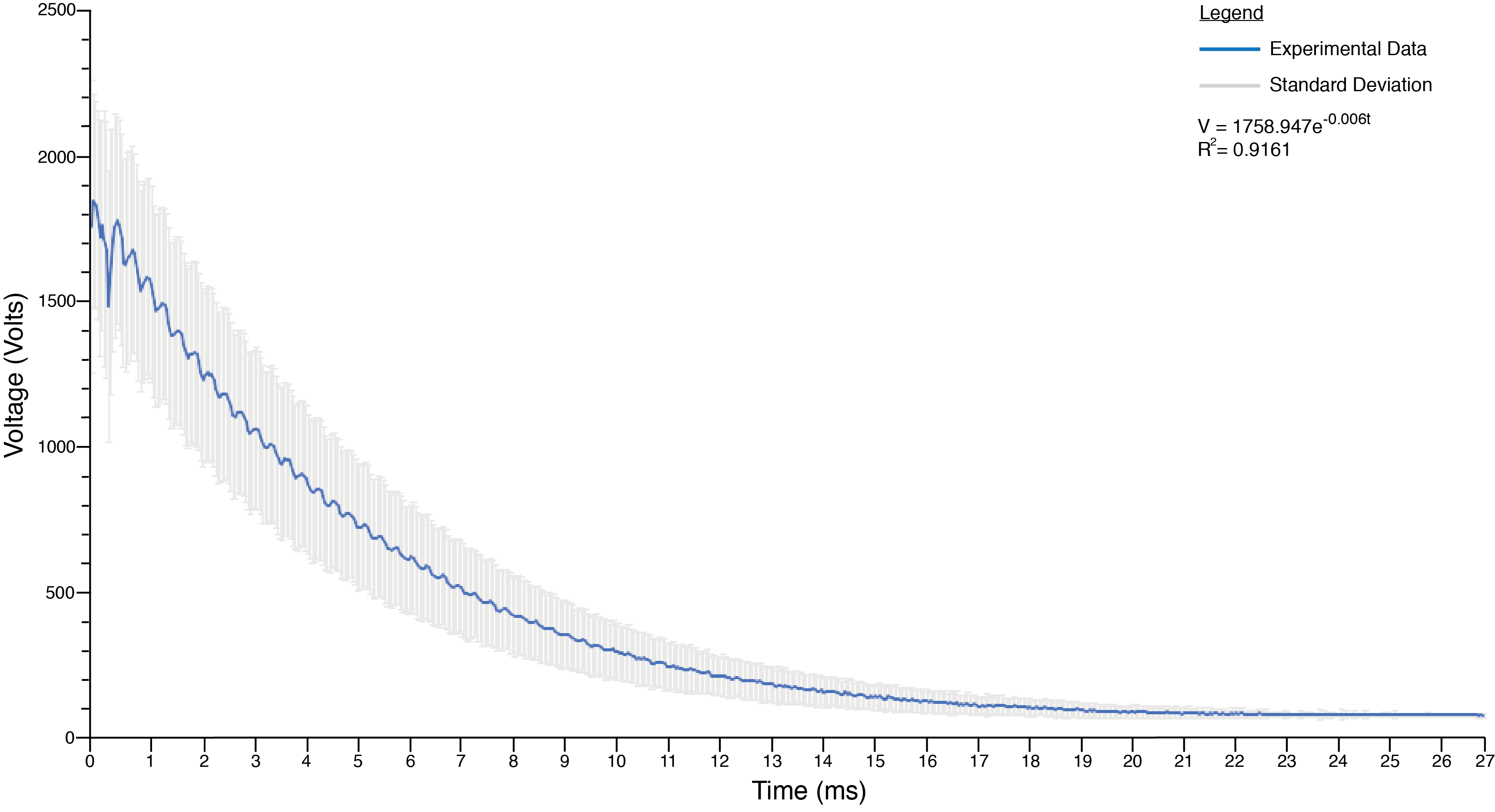 Figure 2: Exponentially decaying model of the ElectroPen. Waveform illustrates the pulse delivered by the ElectroPen, achieving a signal aligned peak of 1.834kV and 5.16ms time constant.


The crystal found within the ElectroPen is composed of lead zirconate titanate (PZT), a particularly sensitive material known to produce high voltages even with a slight deformation of the crystal [31]. Using an oscilloscope, the voltage outputs and time constants for several different strikes of the PZT crystal from the lighter were quantified and demonstrated to have significant consistency, with the average peak output at 1997.8378 V (S.D. 278.2399 V). The time constant has been shown to have slight variation, with the average time constant at 5.1362 ms (S.D. 0.8927 ms), with trials conducted by 3 individuals across the ages of 18-25, with most values within the necessary range for successful electroporation. Through this, we’ve experimentally determined that the ElectroPen is capable of successfully producing high-voltage pulses within the optimal ranges for electroporation of E. coli, however, to understand how this occurs, the underlying mechanisms for voltage generation must be described. Therefore, we developed a theoretical model to characterize the functionality of the ElectroPen.