Voltage outputs from any piezoelectric-based system are dependent on the force exerted on the crystal, allowing for the reorganization of the ions, creating the corresponding output [32]. In order to characterize the capability of a small lighter to generate high voltages (on the order of kilovolts), the underlying mechanism within the lighter must first be described. The mechanism (which will henceforth be referred to as the “hammer action”) comprises of two springs, a hammer (metal piece striking the crystal), and the PZT crystal itself connected to a metal conductor. The hammer action functions in three phases: a loading phase, a release phase, and a relaxation phase, each directed by various components. During the loading phase, the hammer is held in a locked position as the lower spring and upper springs are being compressed using the user exerted force. The entire upper portion of the casing moves upwards, while the hammer is still locked in a loading position. The time interval of the loading phase is dependent on the force exerted by the user, and has no effect on the output voltage as the hammer's movement is dependent on the spring release. At the release phase, once the action begins to approach is critical point, the lower casing with a connected wedge pushes the hammer out of the latch while the spring is compressed at maximum, beginning to release the hammer. Then, the hammer switches from the lock to unlock state, allowing the lower spring to extend and project the hammer towards and onto the piezoelectric crystal, with the upper spring remaining compressed. The relaxation phase then constitutes the user pulling back, extending the upper spring, forcing the hammer downwards into its original state with no effect on the lower spring. Analysis of high-speed videos of the hammer releasing indicate that the hammer is able to reach a maximum velocity of 8 m/s at a peak acceleration of 30,000 m/s2. Further analysis indicates this rapid acceleration produces jerk of up to 300,000,000 m/s3 from this small hammer action, indicating the extreme nature of the design, allowing for the production of a powerful resultant force striking the crystal. In an effort to characterize the correlation between the experimentally obtained voltage outputs using the ElectroPen and the theoretical outputs, a piezoelectric static voltage theoretical model was used. Through this model and the data values established as constants , the theoretical voltage output of the crystal found within the lighter is a maximum of 2699 Volts, with a lower output under normal conditions due to the strain on the crystal from expanding towards its maximum length, as well as the resistance caused by the copper wires and metal conductors in the lighter. As the values from the described lighter are of the same magnitude, it can be declared that the theoretical basis confirms the obtained values from the experimental trials. 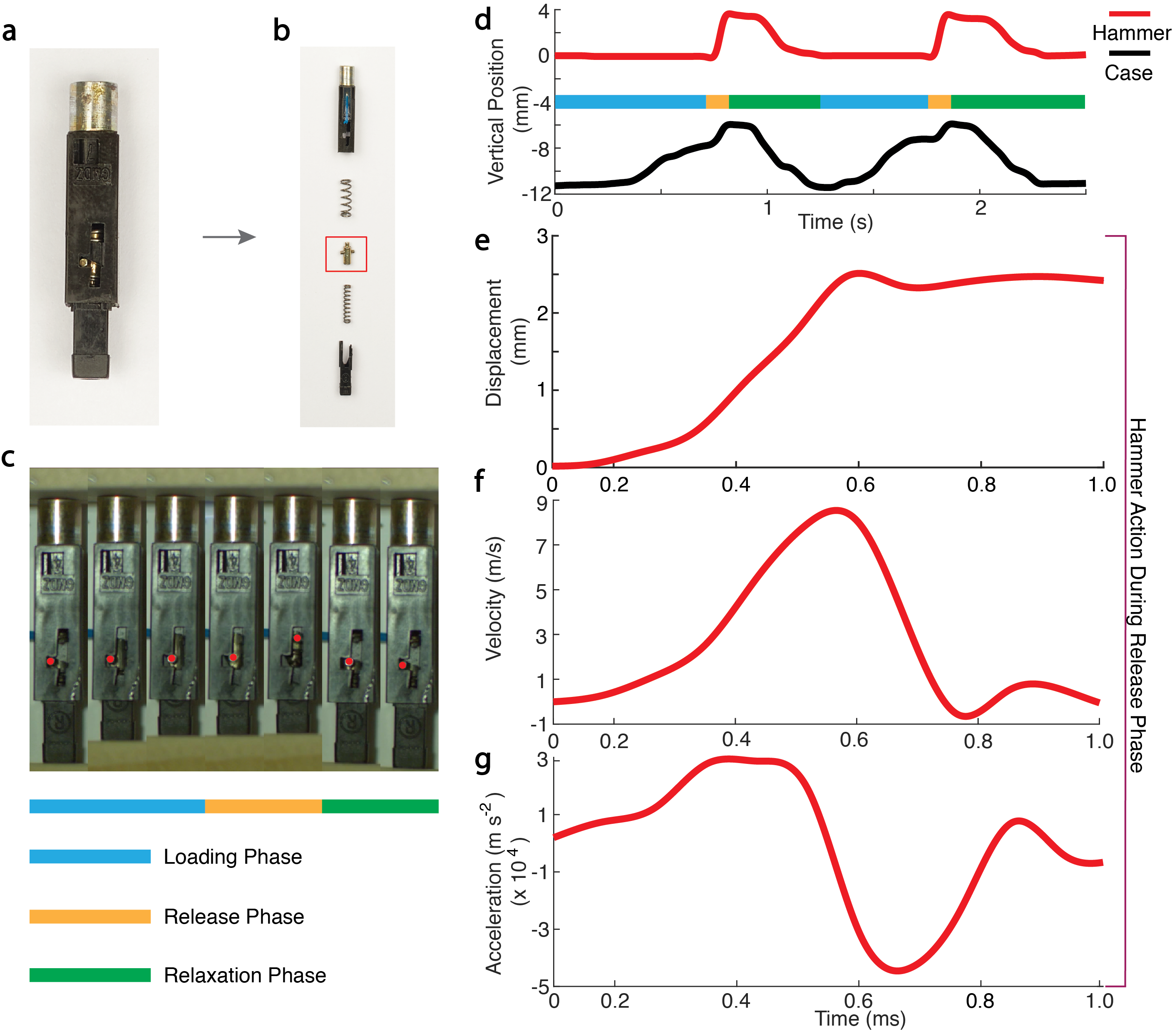 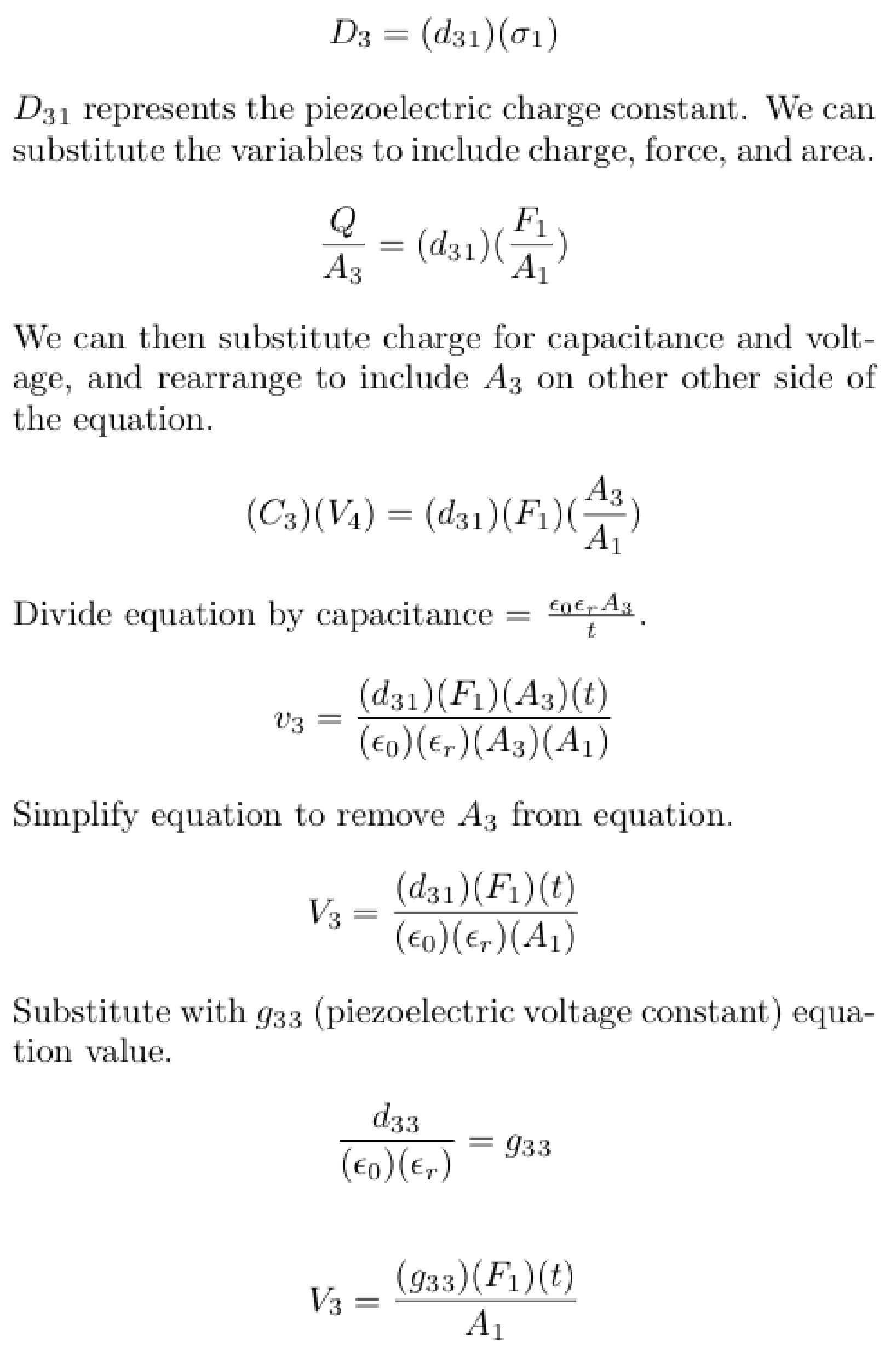 Figure 5: Derived mathematical model for calculating theoretical maximum voltage for the ElectroPen. Using previously described models, a final model was obtained incorporating dimensions and the disc-orientation of the ElectroPen, resulting in an amplified voltage output. Using established parameters for piezoelectric constants, we arrived at a theoretical maximum of 2.699kV, with the resistance in our system due to strain constraints and wire resistance.


After conducting electroporation trials with the described protocol (Refer to Protocols below), growth of colonies as well as GFP expression were subsequently analyzed. Plates with growth were isolated and inoculated into liquid cultures, and quantified using the plate reader . GFP expression levels were thereby analyzed with a comparison of the ElectroPen to the outputs from an industrial electroporator (BioRad MicroPulser). With the negative control serving as the baseline comparison for validating positive expression of GFP, it can clearly be seen that there is a significant difference in fluorescence intensity (represented as Fluorescence/OD600) between the negative and positive control, confirming that GFP was successfully electroporated. The experimental samples were conducted using the ElectroPen and the positive control with the BioRad electroporator. It can be seen that the fluorescence intensity values for the ElectroPen trials are similar to the outputs produced by the standard electroporator, indicating successful electroporation, uptake of DNA, and expression of GFP by the E. coli bacteria. The obtained transformation efficiency (similar to the BioRad Micropulser) from the experimental trial additionally indicates the functionality of the ElectroPen, presenting it as a powerful device for infield and low-resource settings.